Whenever we have new people visit San Francisco, a walk to the Ferry Building and Pier 39 is always on the agenda.

On Friday morning, our group set out on foot from Nob Hill and made it to the Ferry Building Marketplace around 11 a.m. Our visiting friends, Grant and Bre, were in complete awe of the free samples and food available for purchase at the little vendors in the market.

It was probably the least busy that Dave and I have ever seen the Ferry Building, which made it even more pleasant. No need to dodge crowds. We could dawdle and move slowly from store to store.

First up was a meat cup each for Grant and Bre. 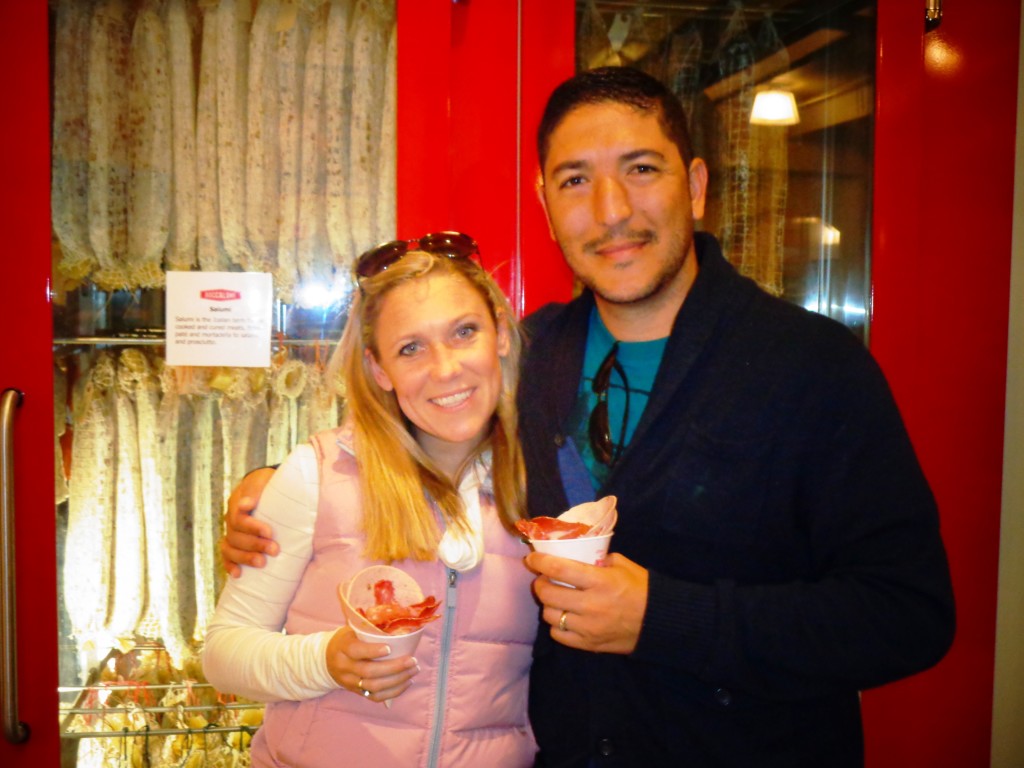 Then some olive oil tasting. 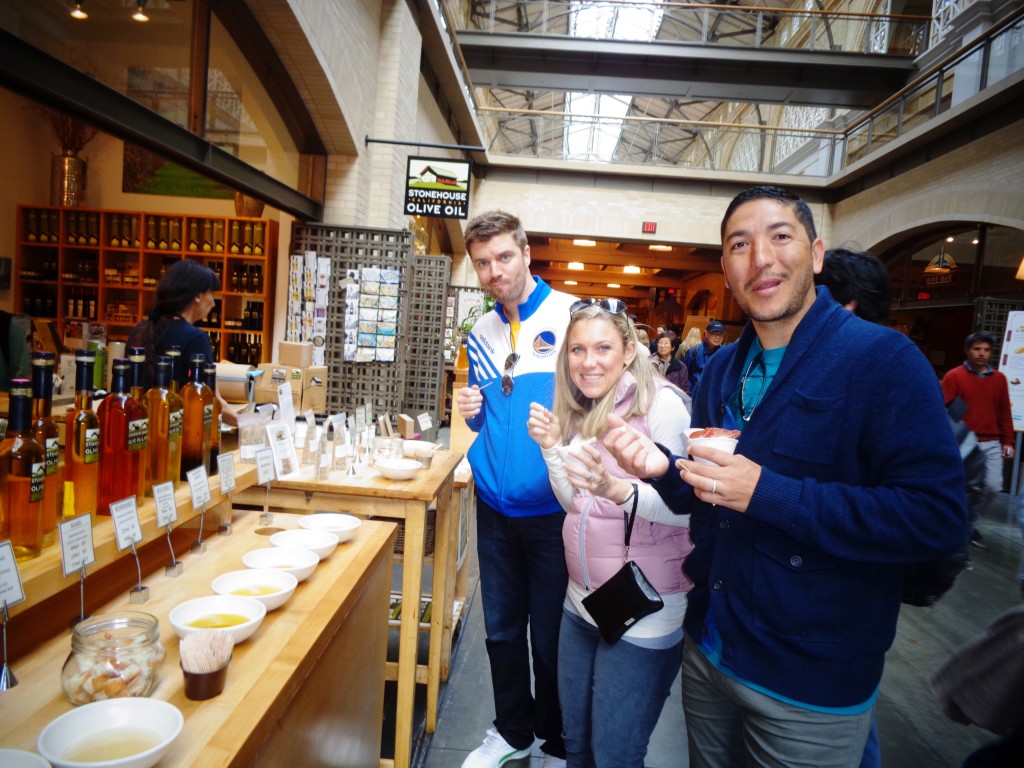 Followed by beef jerky (Grant introduced us to something called Biltong, a strange South African taste sensation), then oysters, Cowgirl Creamery cheese, sausage on a stick and some signature Blue Bottle Coffee.

We tried most things on the spot, but also bought some treats for later in the weekend. 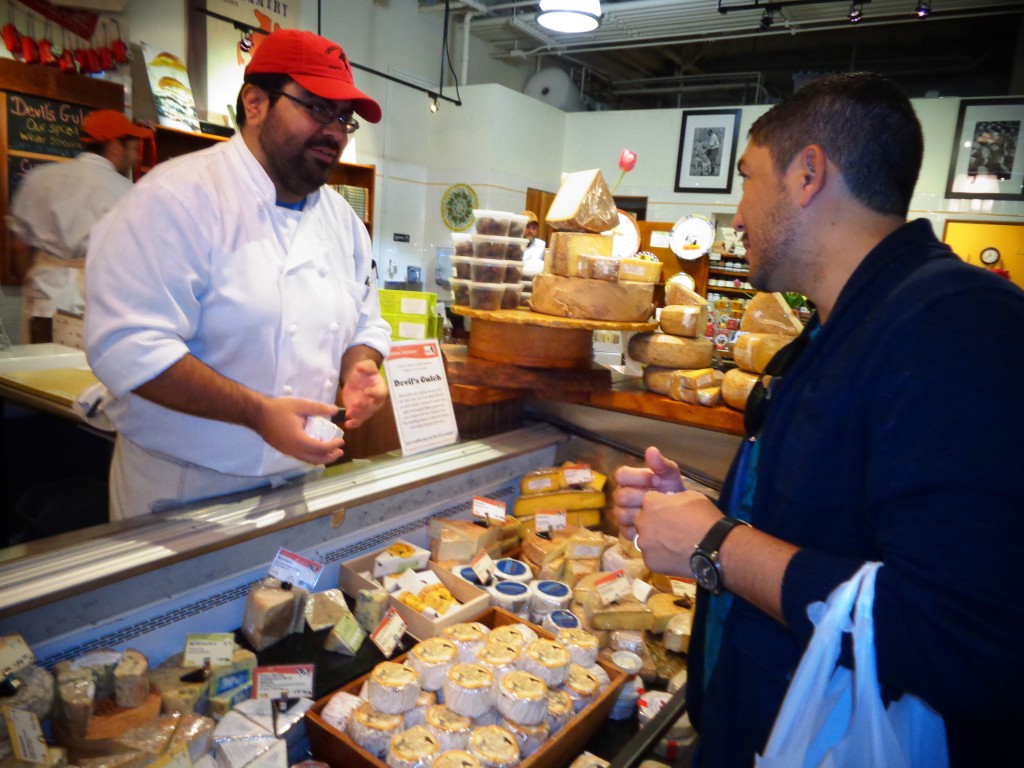 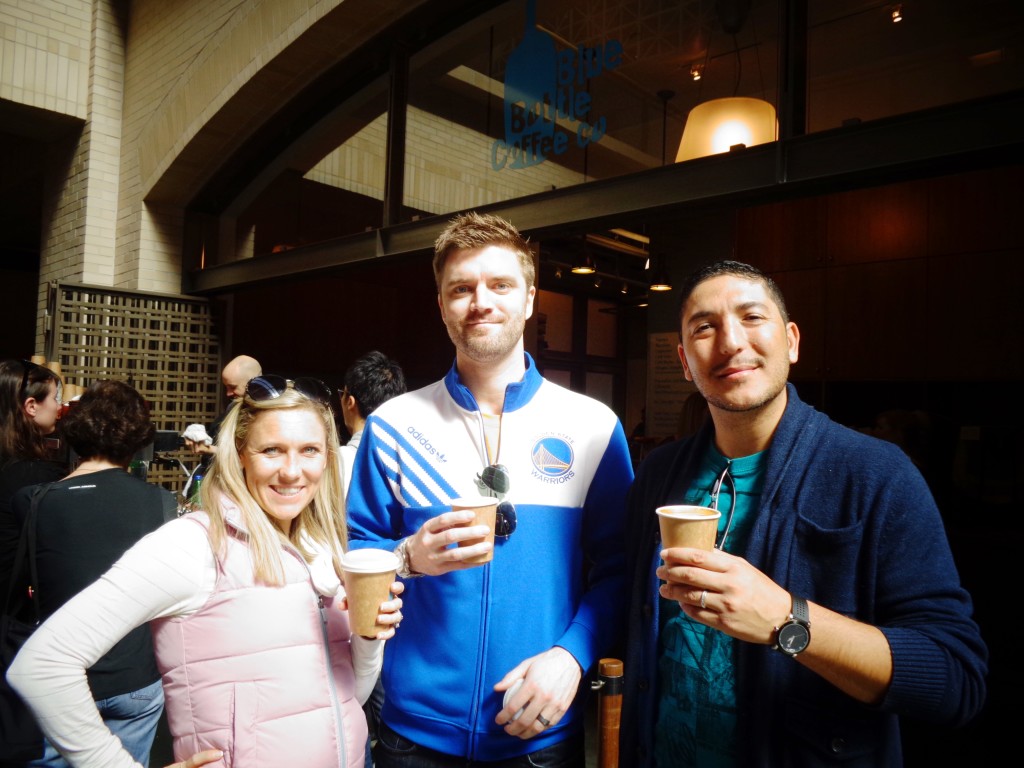 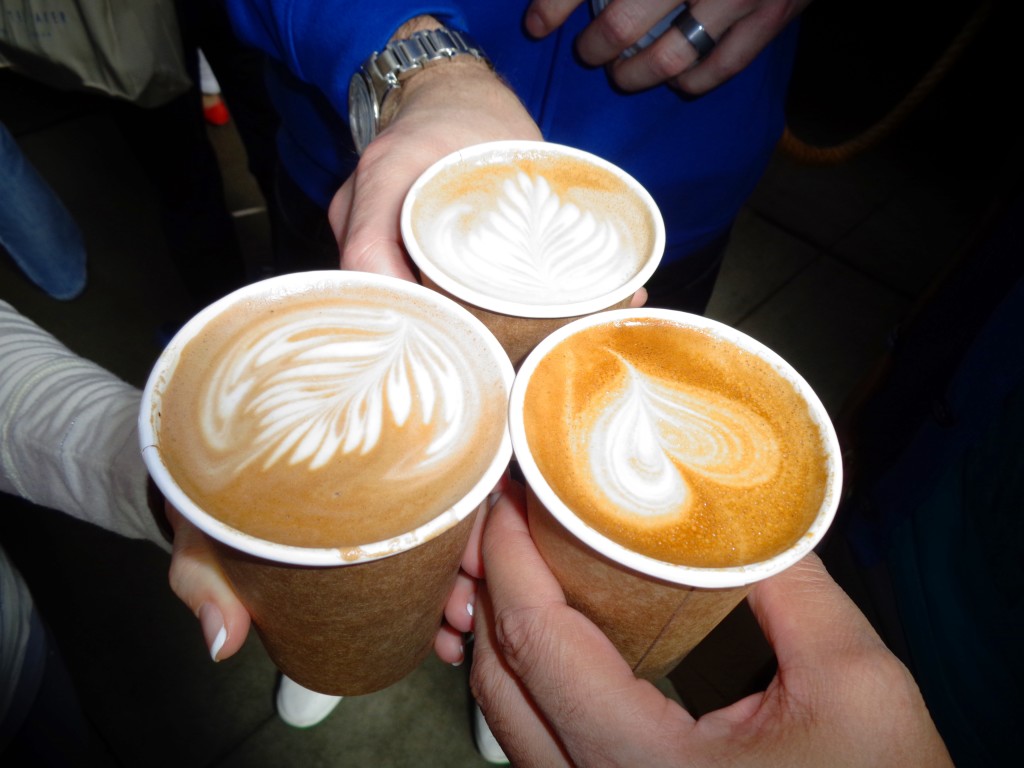 While I wanted to eat everything that the others did, knowing that I had to teach BODYPUMP later that evening kept me a bit more conservative with my nibblings. With a day of walking and sightseeing, I made a concerted effort to drink plenty of water so I didn’t get too dehydrated, which is very easy to do.

Have you ever heard the term “Bluebird Day” before? I hadn’t, but Dave used it, and it surely described the scene perfectly. We had unseasonably warm weather, with just enough chill in the wind to keep us cool while walking around.

Here we are in front of the Bay Bridge. 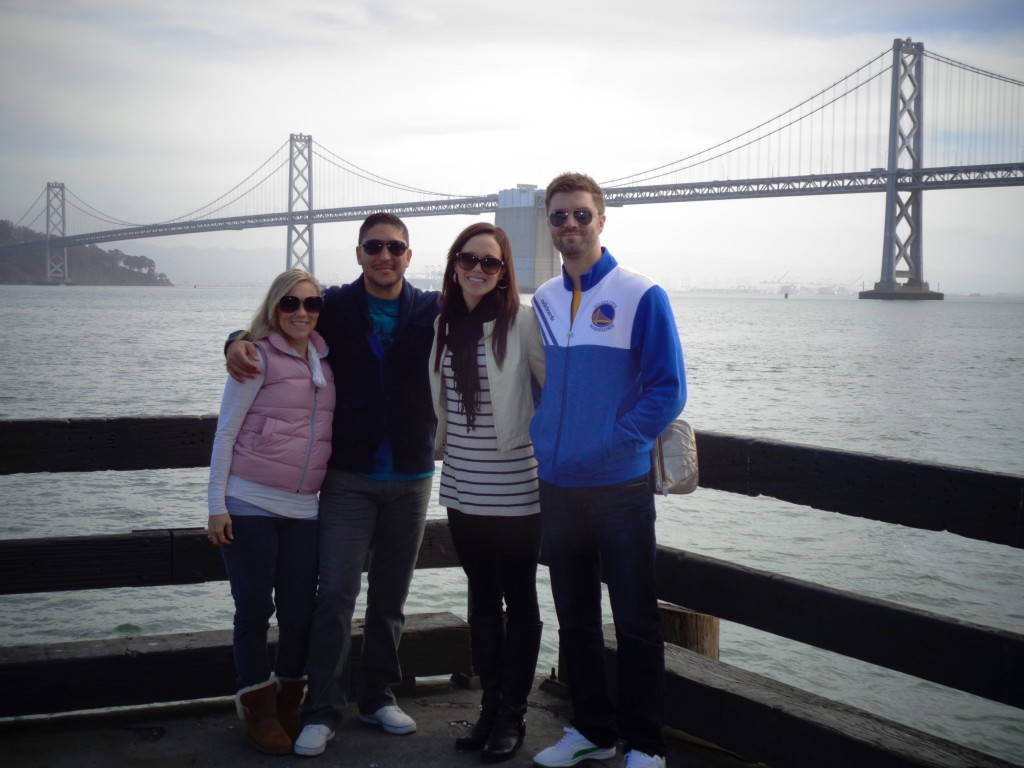 After spending a good hour at the Ferry Building, we continued to walk down the Embarcadero, strolling along slowly and people watching.

Grant came to San Francisco knowing he wanted to eat at Pier 23, a restaurant featured on Diners, Drive-ins and Dives on the Food Network. Luckily, we were able to snag an outdoor table after waiting only 20 minutes. It was the perfect weather and scene for lunch al fresco on the Bay. 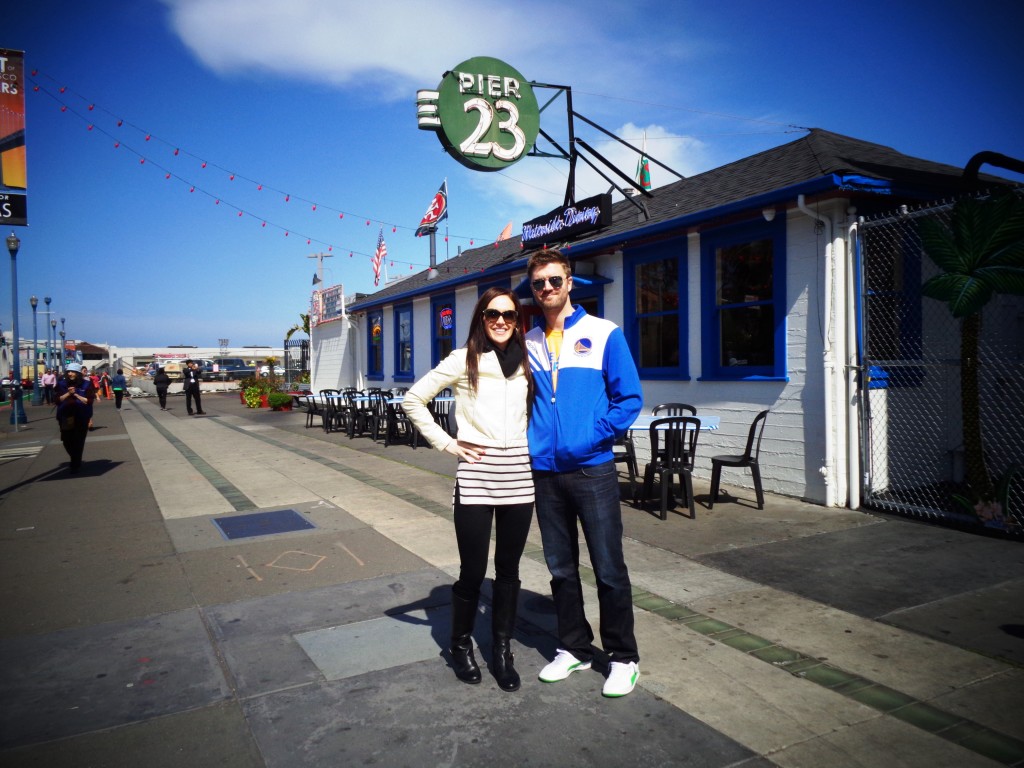 We all ordered our own seafood entrees for lunch, and I selected trout. The prices were reasonable, and the portions pretty small for a seafood joint on the water. That was a good thing though, since we didn’t exactly arrive with empty stomachs.

After lunch, we walked to Pier 39, checked out the sea lions, a few stores and then ventured through Fisherman’s Wharf. These are two of the most touristy areas of San Francisco and places that we only go with visitors. We told Grant and Bre that the rest of the trip would be spent the way locals live, away from the hustle and bustle and chain restaurants.

Here’s a look back at the City from Pier 39. 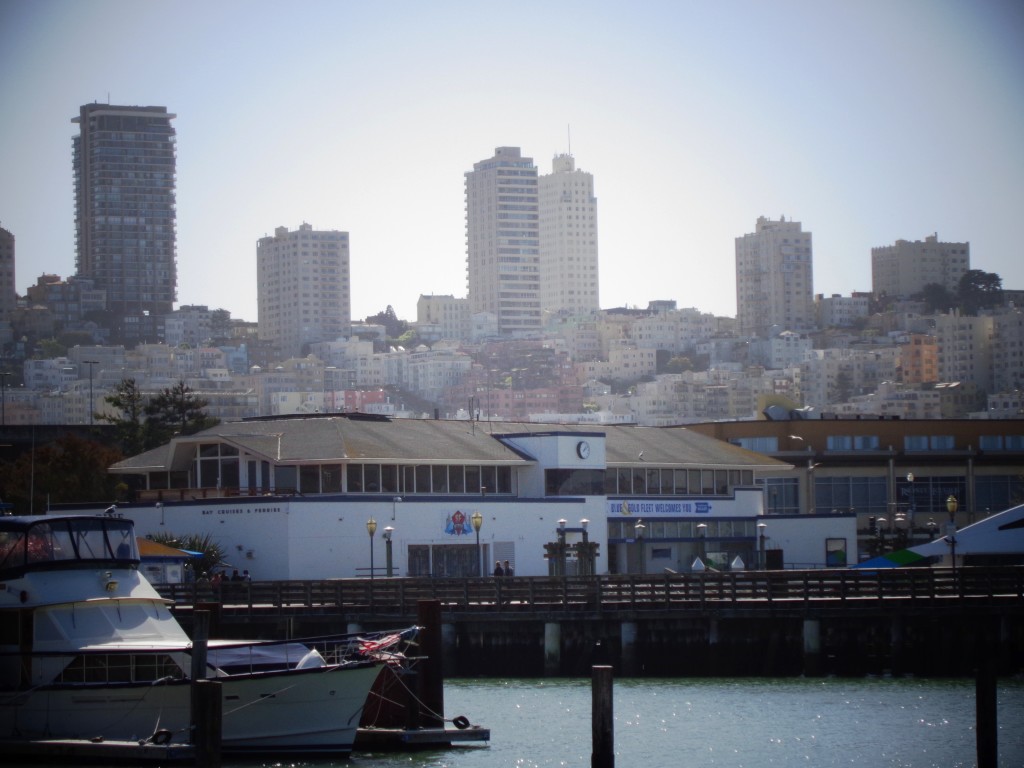 Our last stop of the afternoon? In-n-Out Burger. True story.

Grant and Bre had never tried it, so we had to take them there. Dave and Grant shared a shake and a burger, and Bre got a protein-style (wrapped in lettuce of course) burger.

I abstained during this stop.

With that, our outing was complete.

After miles of walking and tons of food, we hopped in an Uber and went back to the apartment.

In the evening, Dave went off early to meet with a client at the Warriors game, I went to teach BODYPUMP and Grant and Bre took a little nap before heading to the game themselves.

All in a day’s work, my friends. We conquered the Embarcadero bite by bite, but also walked several miles and got plenty of fresh San Francisco air.

With the death of Google Reader several months ago, I switched to Bloglovin’ to keep up with some of my favorite blogs. Follow A Lady Goes West with Bloglovin today.