Another weekend full of fitness for me is nearing its end. I’ll write a recap later this week of the personal trainer workshop and exam that kept me busy Saturday and Sunday, but for now let’s look at Friday’s events.

On Friday evening, I debuted the latest BODYPUMP 89 release to my regular class at Marathon Plaza 24 Hour Fitness.

The group fitness room was decorated with animal print balloons, and the mirrors were covered with the themes for each day of the launch events. Friday’s theme was “red hot,” so of course, I had on some red. (If you take a close look at my outfit below, you’ll see some red-trim shorts worn over capris. Back in Orlando, I used to be able to wear those shorts alone. However, these days they fit more like underwear. And nobody wears short-shorts in the gym in San Francisco anyhow.)

The launch went great, and the members seemed to enjoy the workout. I nailed everything, which I’d like to attribute to plenty of preparation.

Here I am with a couple of my regulars after class. 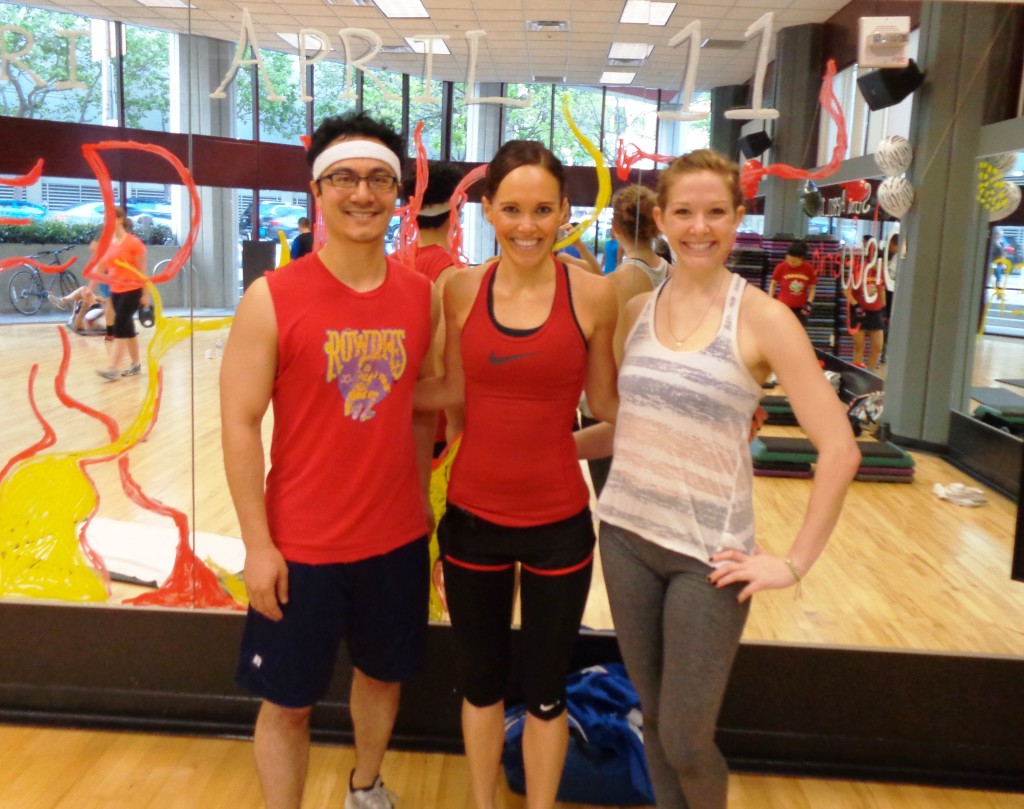 After the launch, Dave and I walked to a nearby sushi joint called Izakaya Ninja, which we had never tried before. It was just a couple of blocks away from our apartment, and we were able to get a table in only five minutes. I went in my sweaties, of course, so Dave changed out of his work attire to match my level of dress. 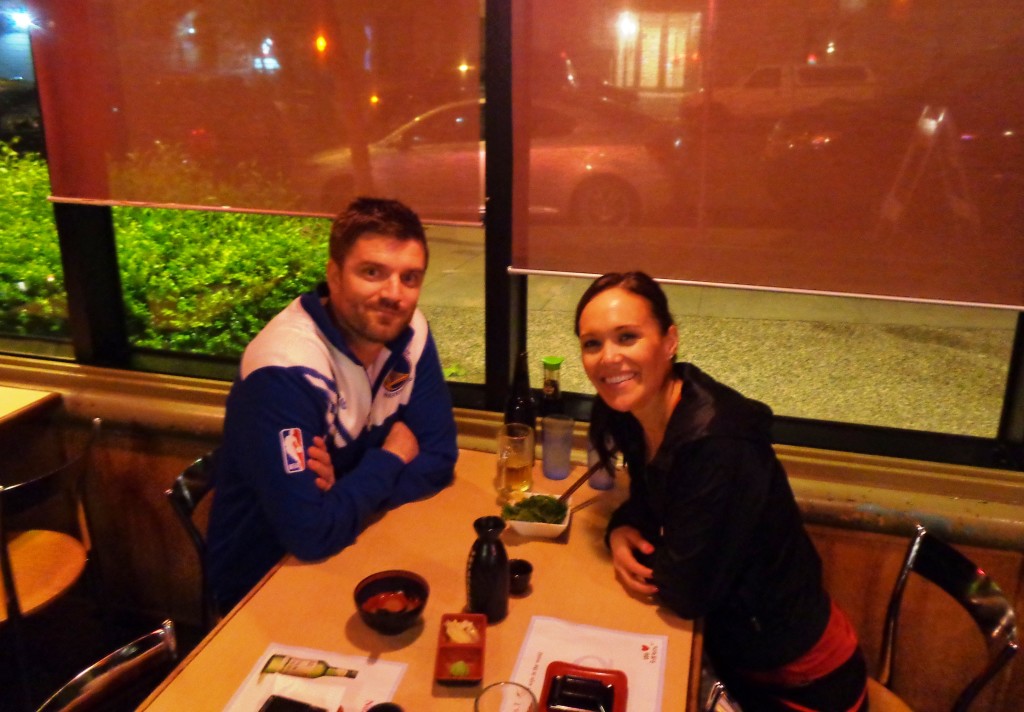 Izakaya Ninja is a no-frills sushi place that even had pictures on the menu. I happen to love that, even if it isn’t exactly the sign of an authentic place. 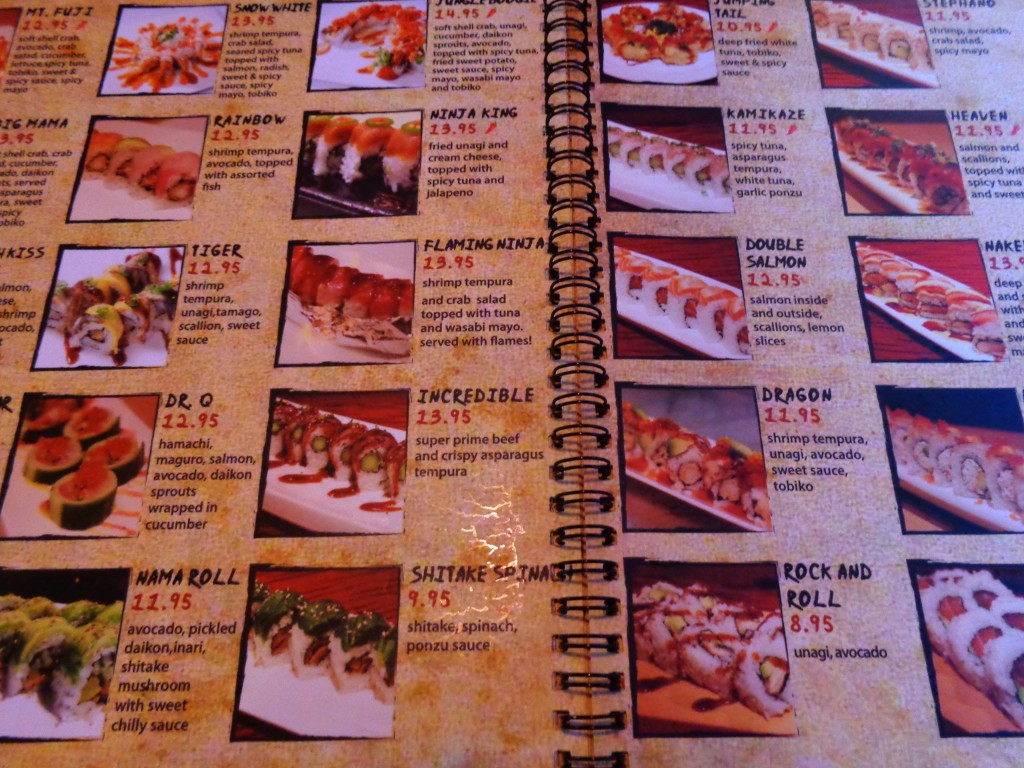 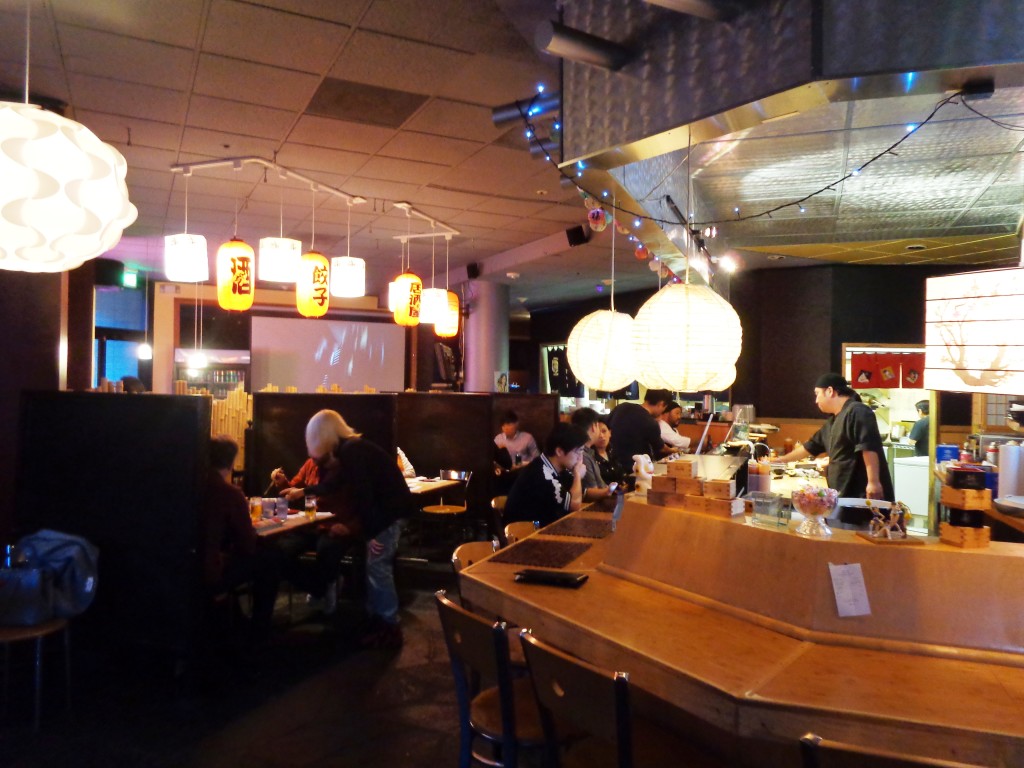 I ordered hot sake, a seaweed salad, some salmon nigiri and a roll called the Dr. Q. Dave had a beer, miso soup, tuna nigiri and a spicy tuna roll. Here’s a look at some of the food. 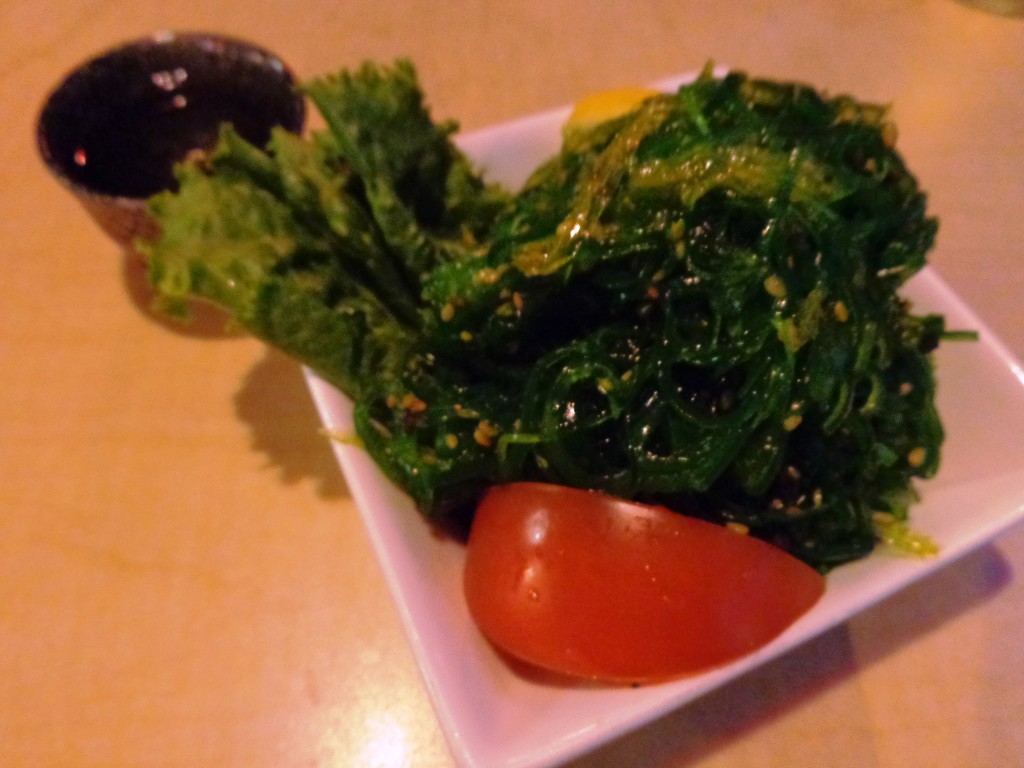 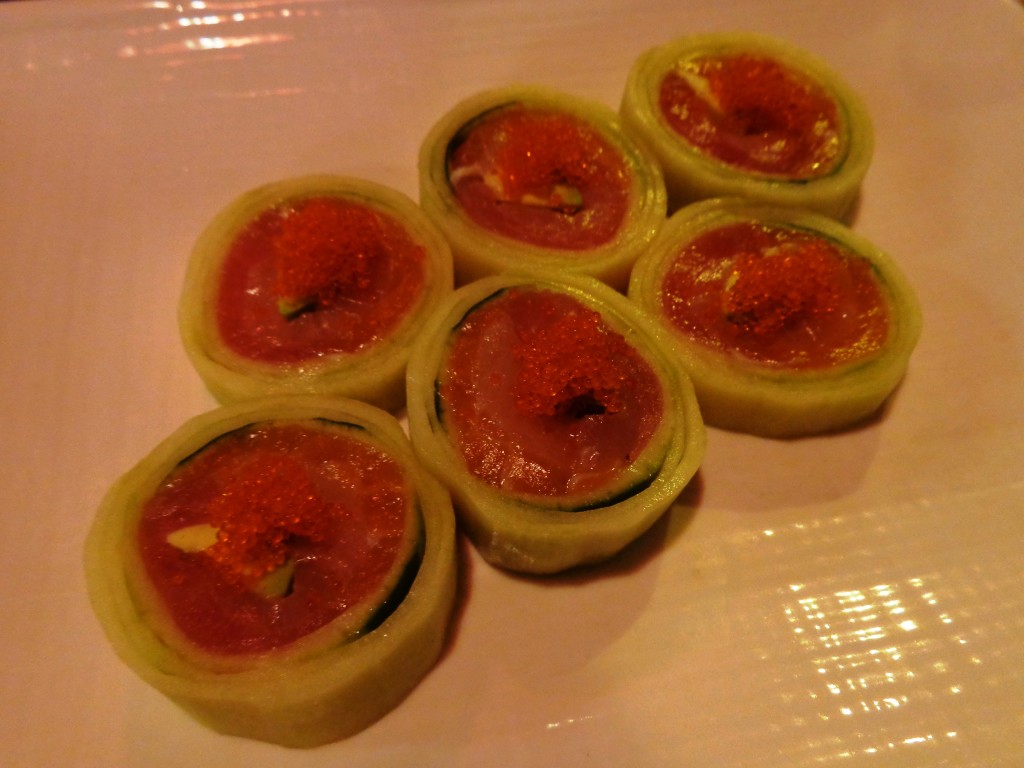 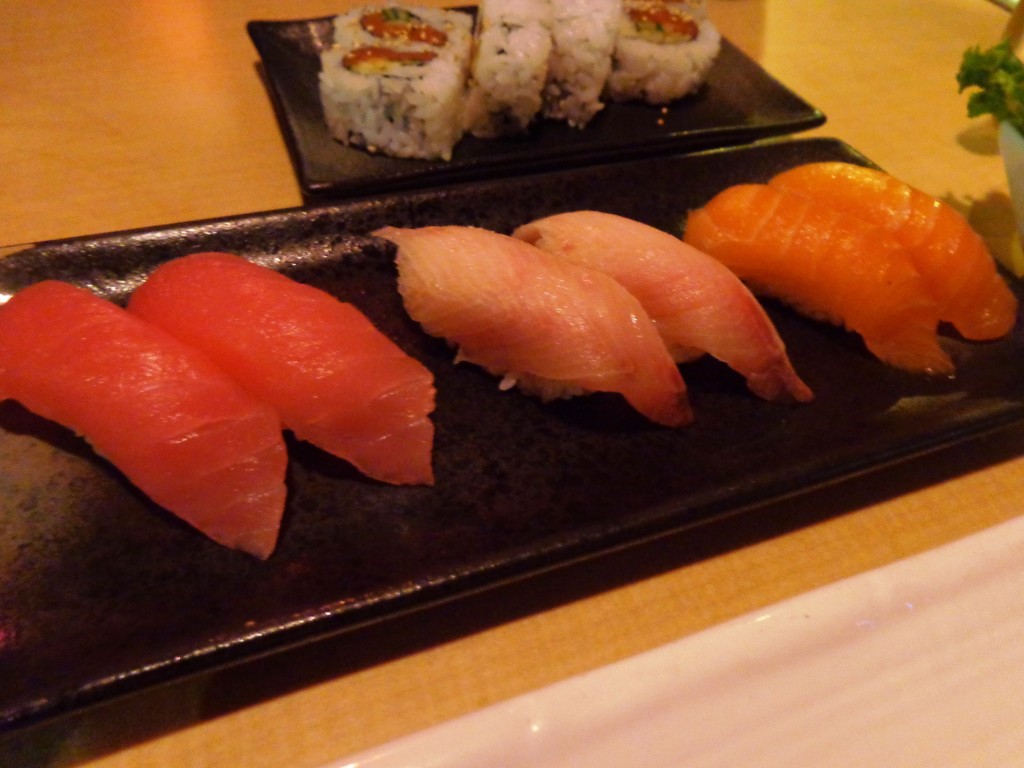 I always order a seaweed salad at sushi places, so I’ve got a baseline for comparison on that dish. Izakaya offered the best seaweed salad I’ve ever had.

However, I ended up having a stomach ache overnight, which leads me to believe perhaps I consumed some bad sushi? Although it was an unpleasant feeling that lasted through the morning before I went off for my training, it didn’t happen to Dave. Based on the good food and proximity to our place, I’d still probably consider returning to the same spot. Not to mention, our dinner was only $60, which is very hard to do in the City.

The rest of my weekend was spent immersing myself in all things fitness, kinesiology, nutrition, biomechanics, exercise science and personal training, and there’s more to come on that soon.

And back to BODYPUMP

For those of you that are familiar with BODYPUMP but haven’t had a chance to try the new release yet, there are a few things of note. And if you aren’t familiar with the class, might I direct you to this BODYPUMP 101 overview before you read on.

Overall, the music for BODYPUMP 89 is really good. There are some new innovations, which change up the routine, yet it stays true to its mission to be challenging, powerful and fun. Here are a few things that stand out for each of the 10 tracks.

There you have it. BODYPUMP 89 is a fun release, full of good tunes and hard work.

I love teaching a new releases and will continue to teach this one for three weeks in all of my BODYPUMP classes so the members can get a chance to master the moves. After three weeks, I’ll begin incorporating older music again and likely switch to a release from a couple of years ago to change it up.

Although I’ve officially launched BODYPUMP, I still have to debut my other Les Mills group fitness programs including the newest BODYATTACK release this week and CXWORX next week, so I’m back to practicing several hours a day to learn the new choreography.

It’s always an interesting endeavor to do BODYATTACK full out in our tiny apartment by myself. Perhaps I’ll wear those red-trim shorts to do so. 🙂

Here’s to a great week!

Did you work out this weekend?