I just returned from a fun-filled weekend in Boonville, California, in which I watched Dave’s sister, Mateal, marry her best friend, Emiko. It was incredible.

Dave has four sisters and two of them (and a spouse) flew into San Francisco on Wednesday and Thursday nights.

On Friday morning, the five of us took off on a two-and-a-half-hour road trip to meet the rest of the family at The Boonville Hotel.

We knew we were in for some quaint accommodations, and the hotel didn’t disappoint.

In fact, The Boonville Hotel is more like a house with rooms than a commercial operation. We didn’t even need to lock our doors as we moved about the grounds.

The hotel’s living room area had couches, afghan blankets, a fireplace and a bookcase full of games. There was also a dining room and a big staircase leading up to the rooms, which were all different layouts and decor.

Dave and I were were pleased with our tiny room: Room number eight. 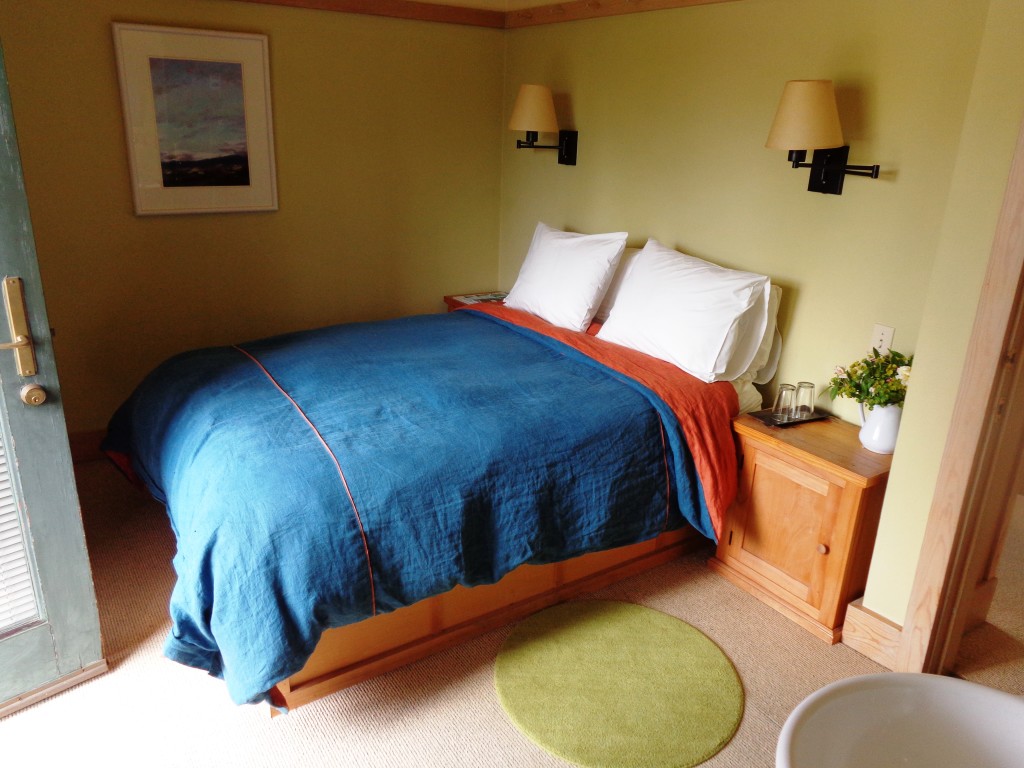 It’s a good thing we’re used to small spaces, because there wasn’t even a closet in our room. We hung our clothes on the couple of hooks on the wall, and put our bags in the corner next to the bed.

Waiting for us in the room was a folder with the weekend’s activities and some tasty dark chocolate bark as a welcome gift. This was the start of the lovely touches by Mateal (Teal) and Emiko, of course. 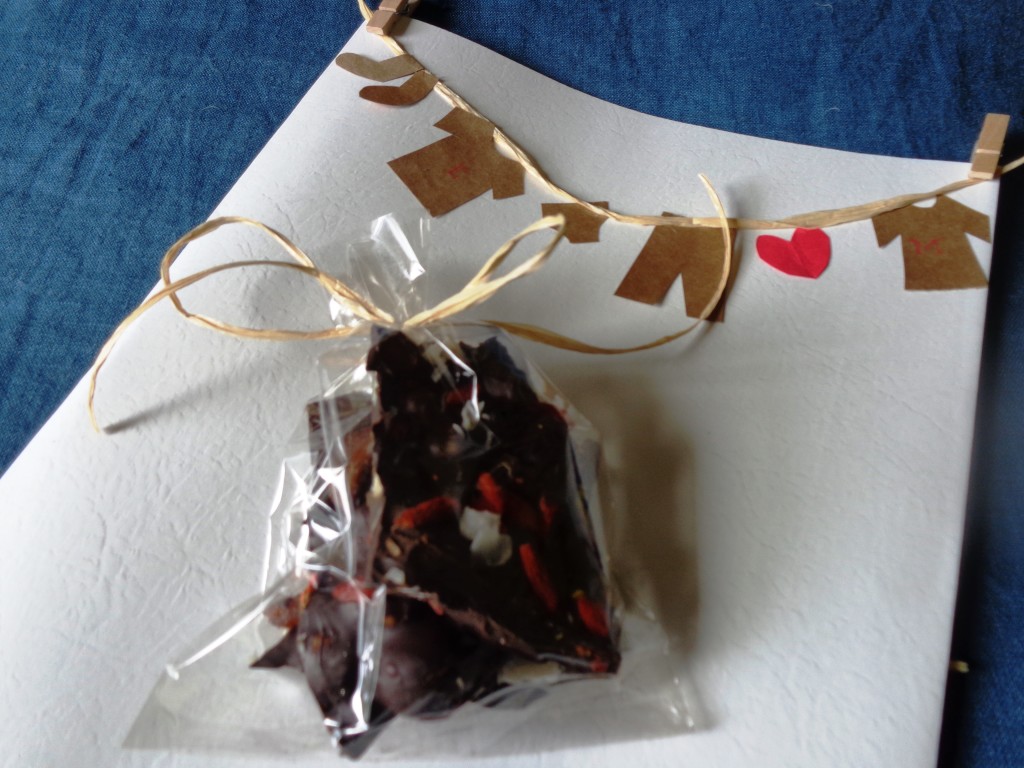 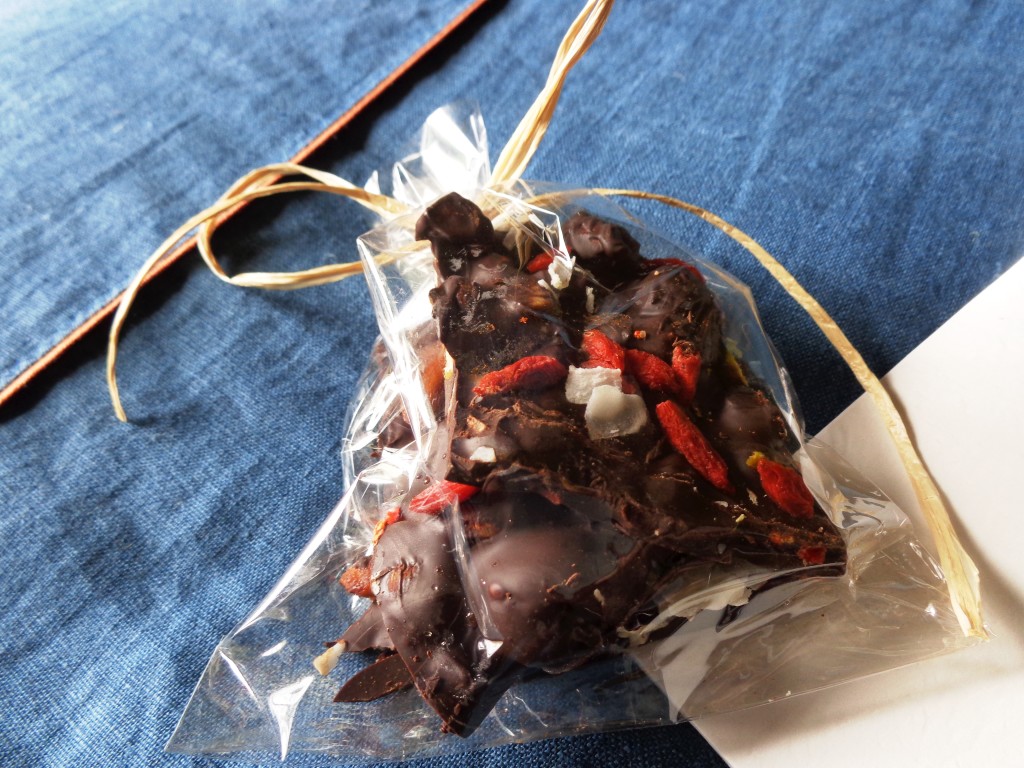 To give you an indication of the homey vibe of The Boonville Hotel, all of the 10 rooms were full of wedding guests, and our names were even on our doors. 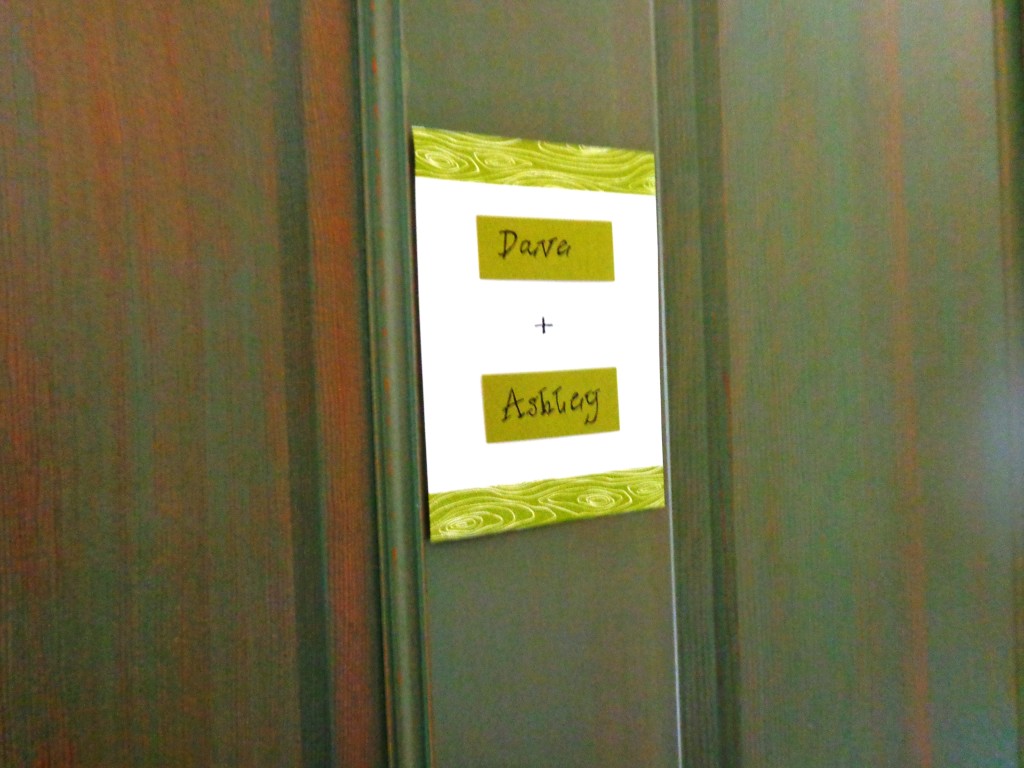 After dropping our bags and saying hello to the bride-to-bes and some visiting family members, who had traveled far-and-wide to get to Boonville, Dave and I walked across the street to Mosswood Market Cafe & Bakery for lunch with his Dad, sisters, aunt and uncle.

Downtown Boonville is just one little strip, so we had no problem selecting our restaurant. 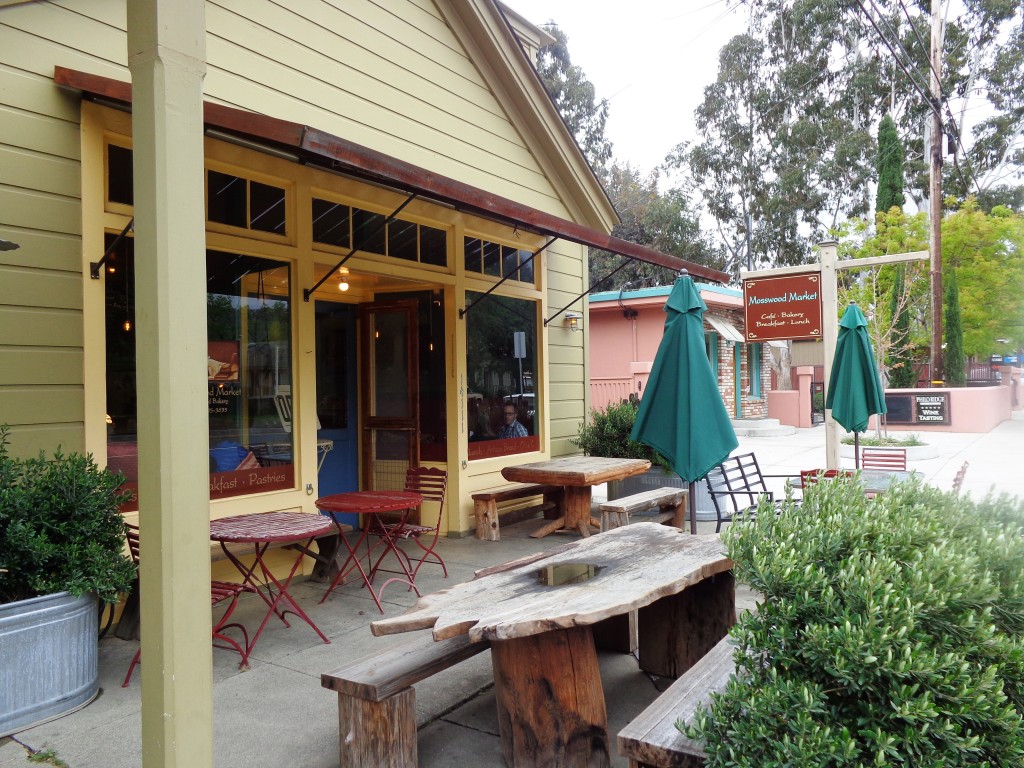 I ordered a mango chicken salad, which was incredible. It included fresh fruit, house-made mango salsa, chicken, pecans and all sorts of goodness. I nearly licked the plate clean. This meal was just the start of the great food in store during the weekend. 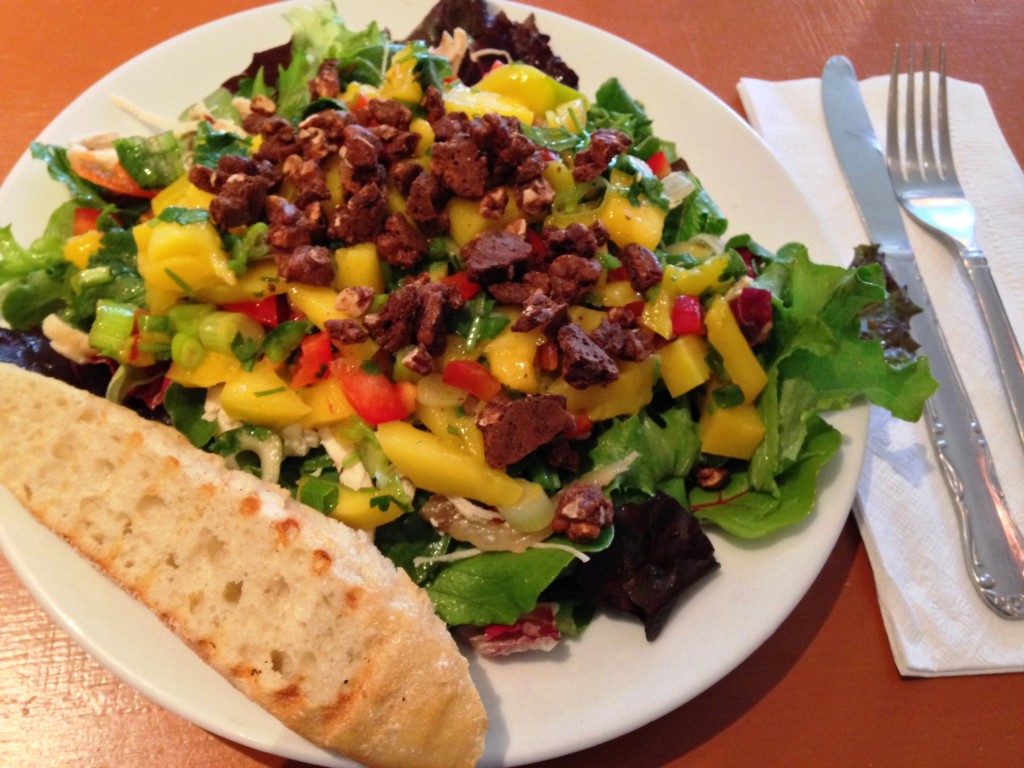 After lunch, we went back to the hotel room for a cat nap before meeting the group for our Anderson Valley wine tour.

There were only about 10 people who participated in the wine tour, because much of the family had last-minute wedding-related to-dos.

However, we weren’t responsible for anything, so we happily joined the wine fun, which took us around Boonville and Philo via a van. During this outing, we got to meet some of Emiko’s old medical school pals and some of her family.

We needed to capture at least one wine-tour selfie, which I took with my phone. From left to right, the picture includes me, Chrystn (Dave’s sister), Dave and Louisa (Chrystn’s wife). 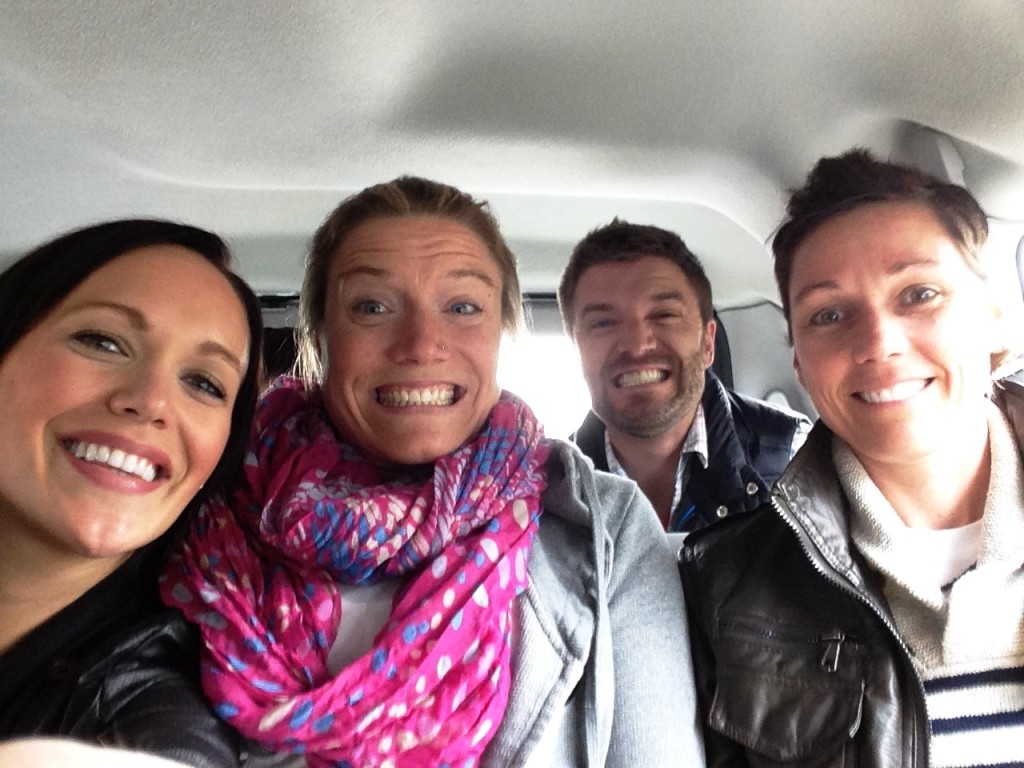 Great smiles by the siblings in the middle there. It runs in the family, I guess.

Chrystn and Louisa live in New Hampshire, and we haven’t seen them in a very long time. We spent as much time as we could throughout the weekend soaking up their company.

The first of the three wineries we visited was Balo Vineyards, a little shop just down the road from the hotel. The man pouring the wine was friendly and chatty with our group, but the wine was only so-so. 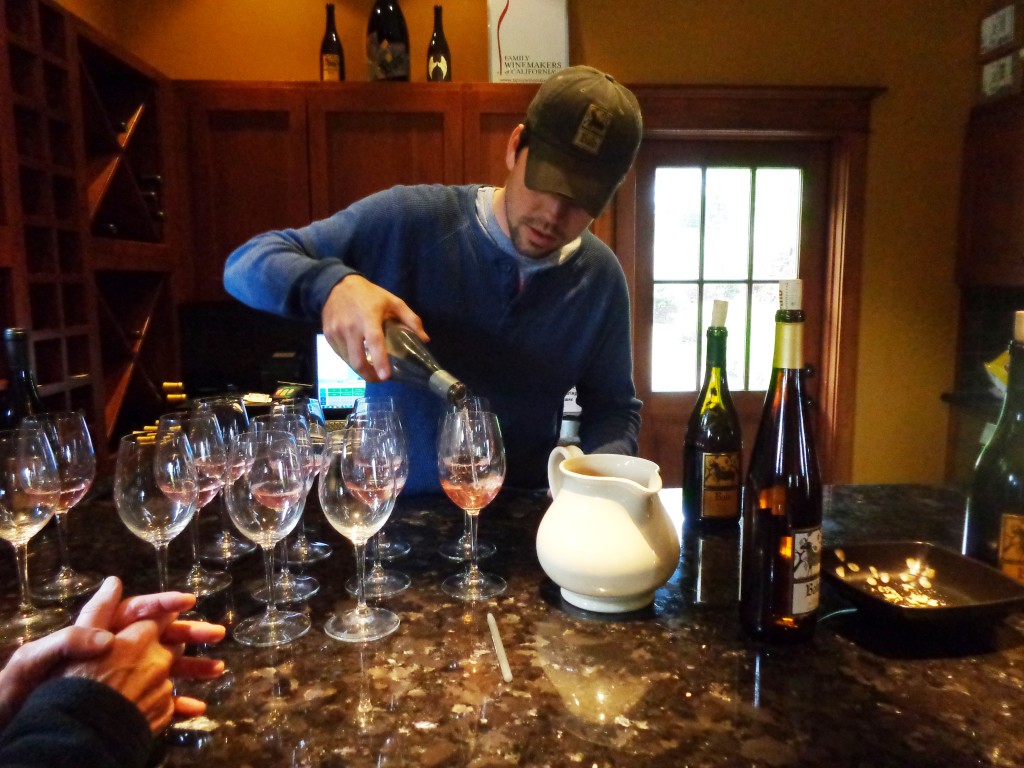 Perhaps the highlight of Balo Vineyards was the golden nugget this fellow shared with us, which is a saying about life in Boonville:

“The odds are good. But the goods are odd.”

It takes a minute to get what that means, but when you do, you smile. 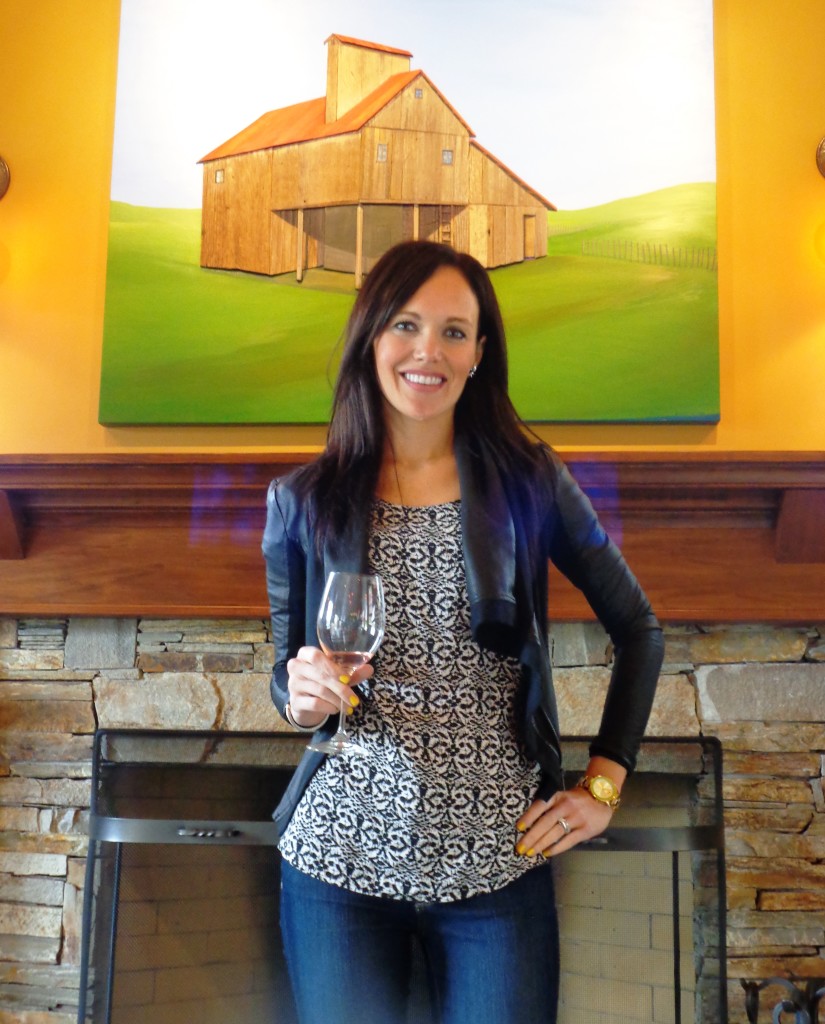 We sampled a few wines, played with the two dogs that were walking around the tasting room, and then got back in the van to move along.

Next up was Navarro Vineyards, which was a little more busy and buttoned-up. The Navarro tasting room had several people pouring and a much larger selection to choose from.

While sampling the wine, we watched real-life farmers herding sheep out in the vineyards. It was a pretty cool sight. 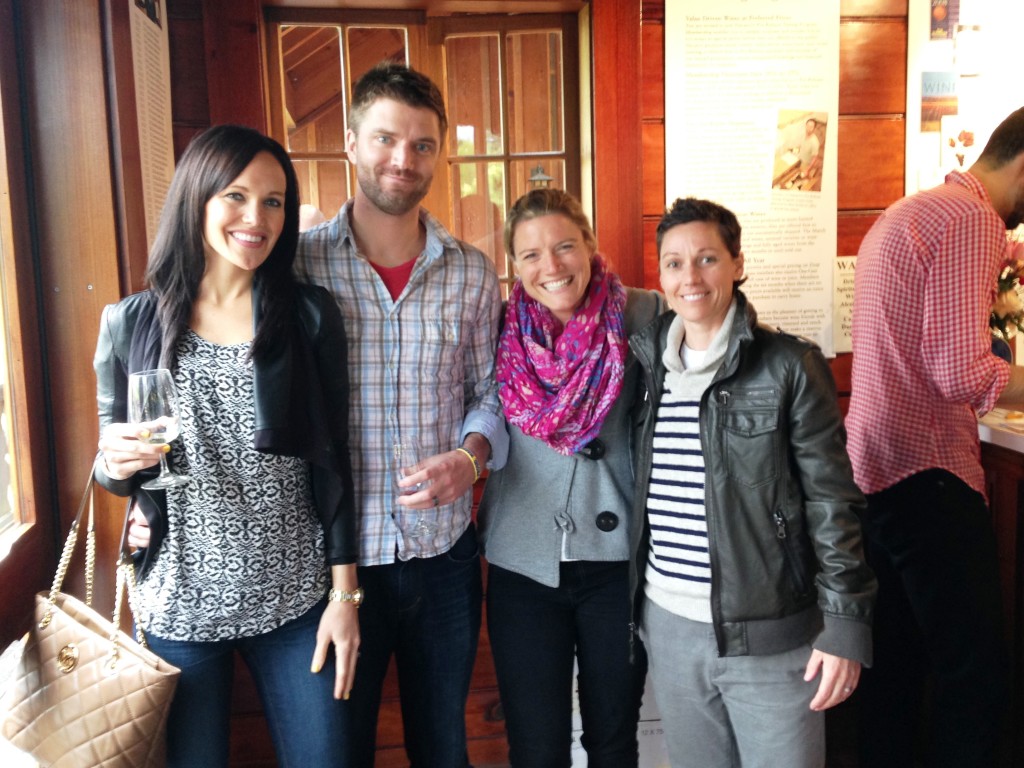 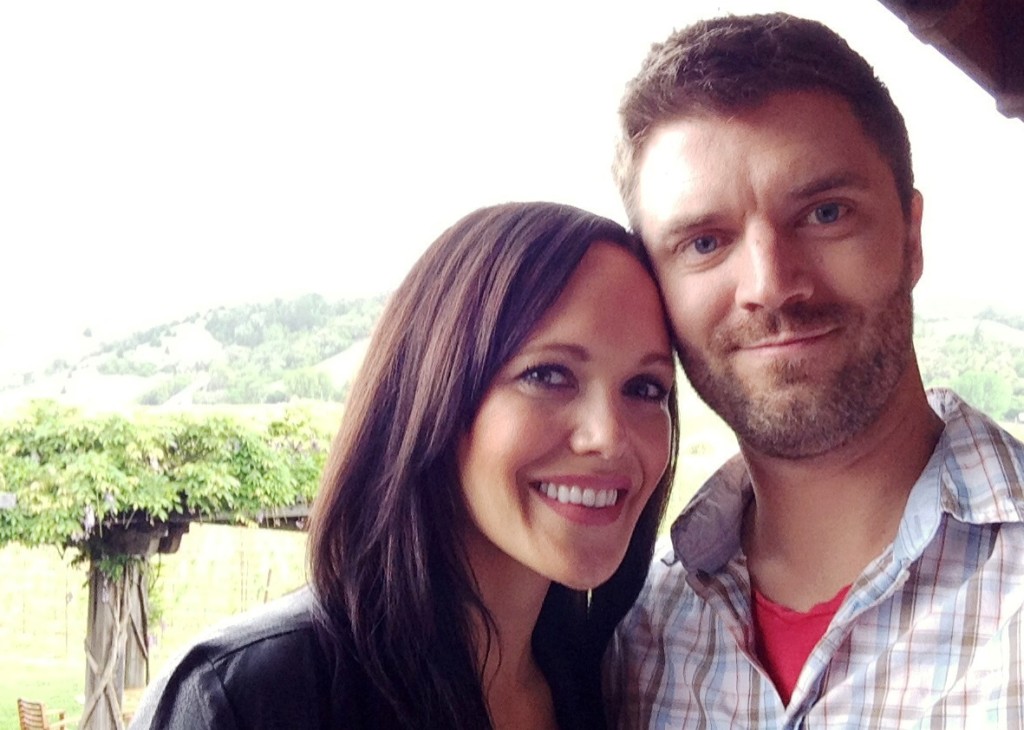 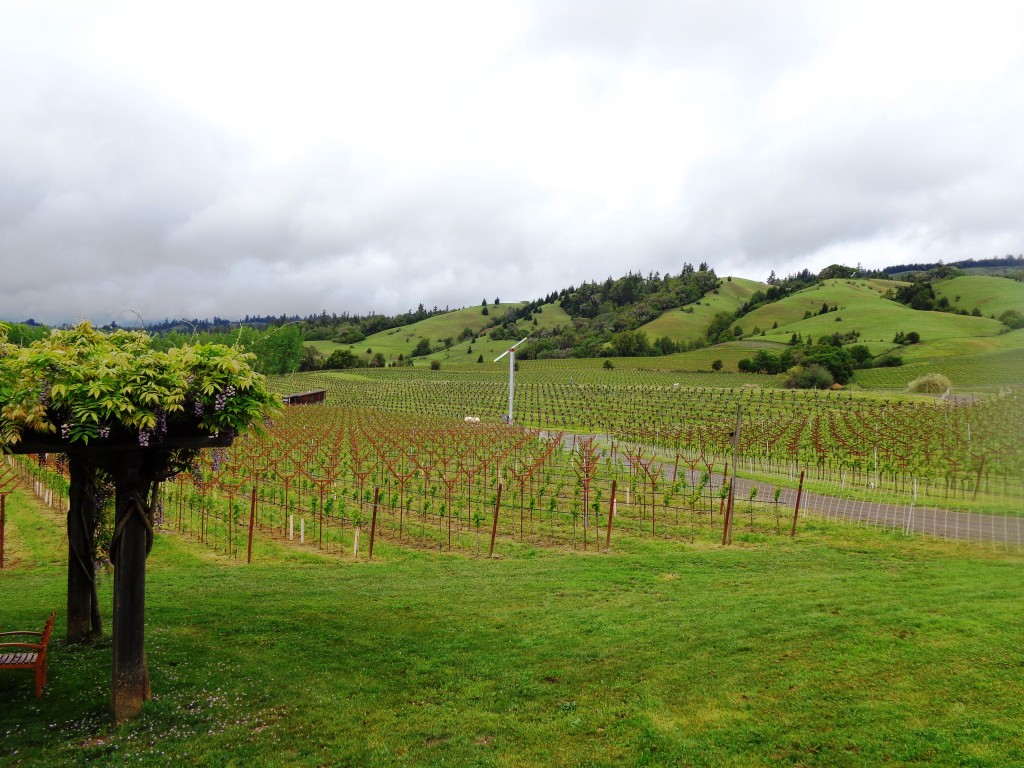 Finally, our last stop of the day was Husch Vineyards, a family-owned spot with a dark little tasting room.

At Husch, our group was set up around some barrels, and we each got to choose six different wines to taste from the line-up. 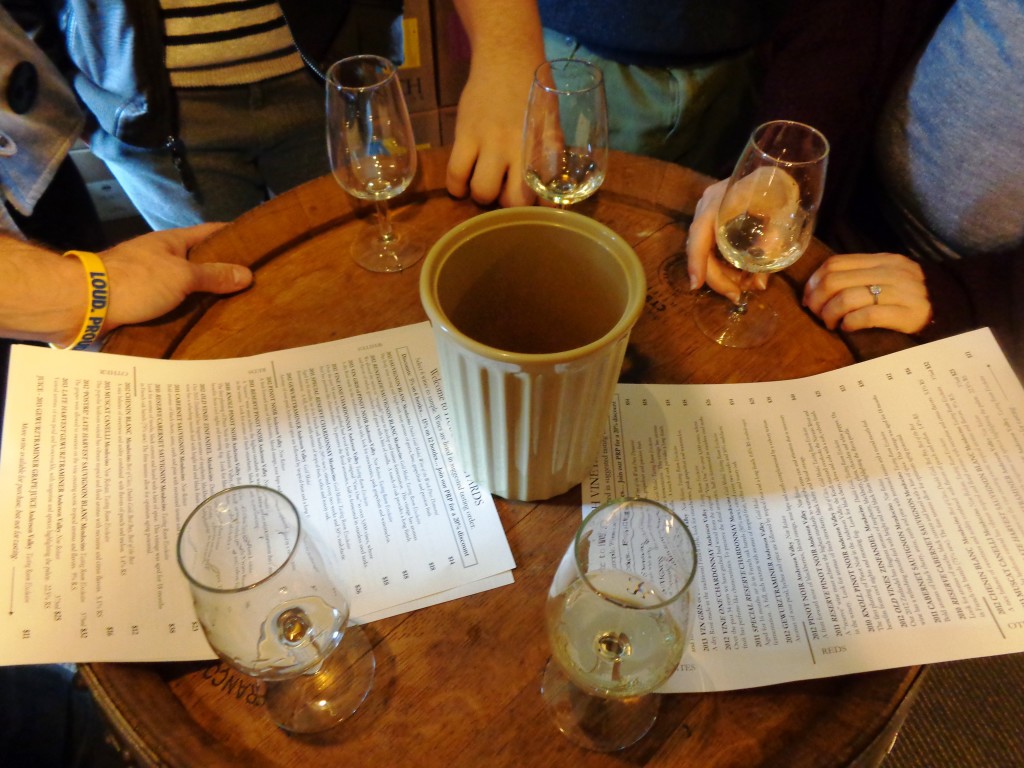 Unlike Napa and Sonoma, where you usually need a reservation for a tasting and also have to pay, Anderson Valley is a lot more laid back with its policies and doesn’t seem to make you feel pressure to buy. All of our tastings were complimentary, and we had no reservations.

We just walked right in and tasted away. 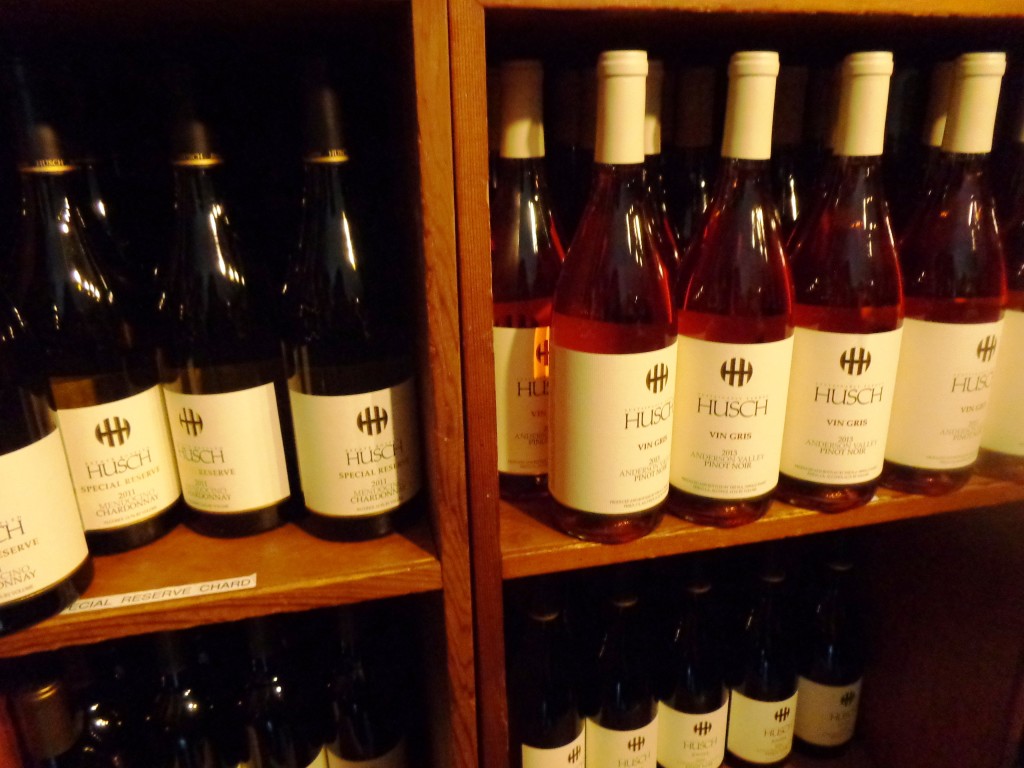 Dave and I purchased a bottle of reserve chardonnay from Husch, which had the buttery-flavor I look for in a white wine.

After Husch, the van dropped us back off at the hotel and we had just a few minutes to change before the family dinner.

The family dinner took place in a barn across the street from the hotel. Unfortunately, it was raining, so we all ran over there with umbrellas and showed up a little soaked and shivering.

The mood brightened once everyone was together, and there was plenty of excitement in the air. I just love the anticipation and feeling of a rehearsal dinner night, and this one was great.

Our dinner was fresh and delicious barbecue, served buffet style, and catered by the Boonville General Store. This was awesome-meal-number-two of the weekend. 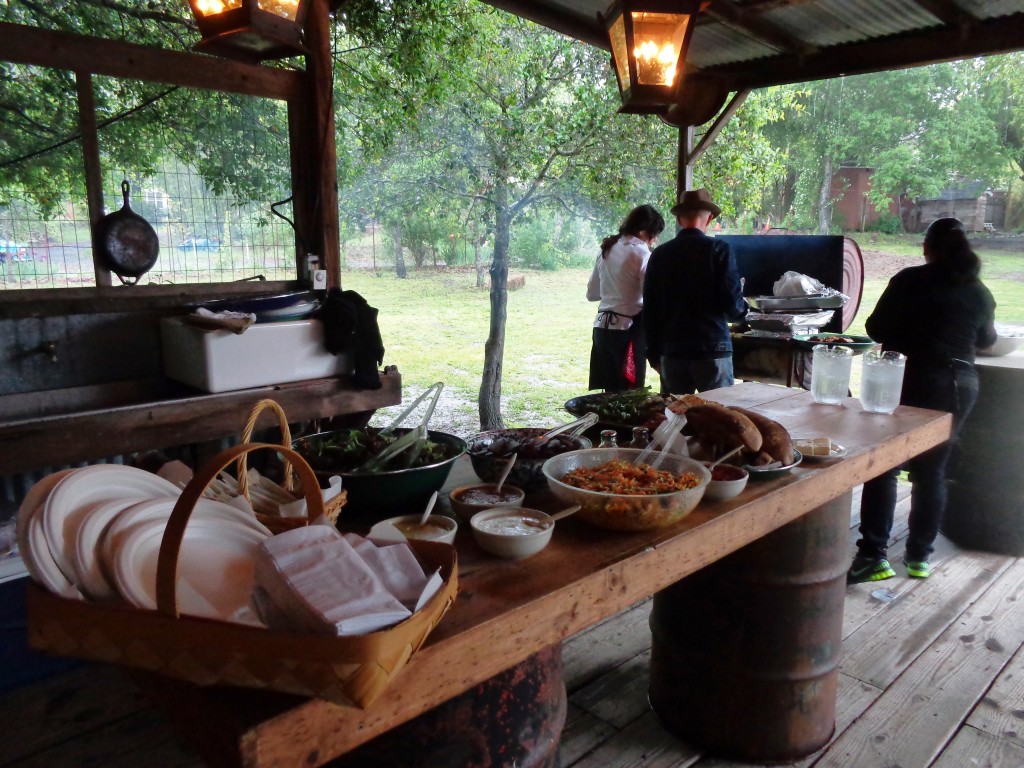 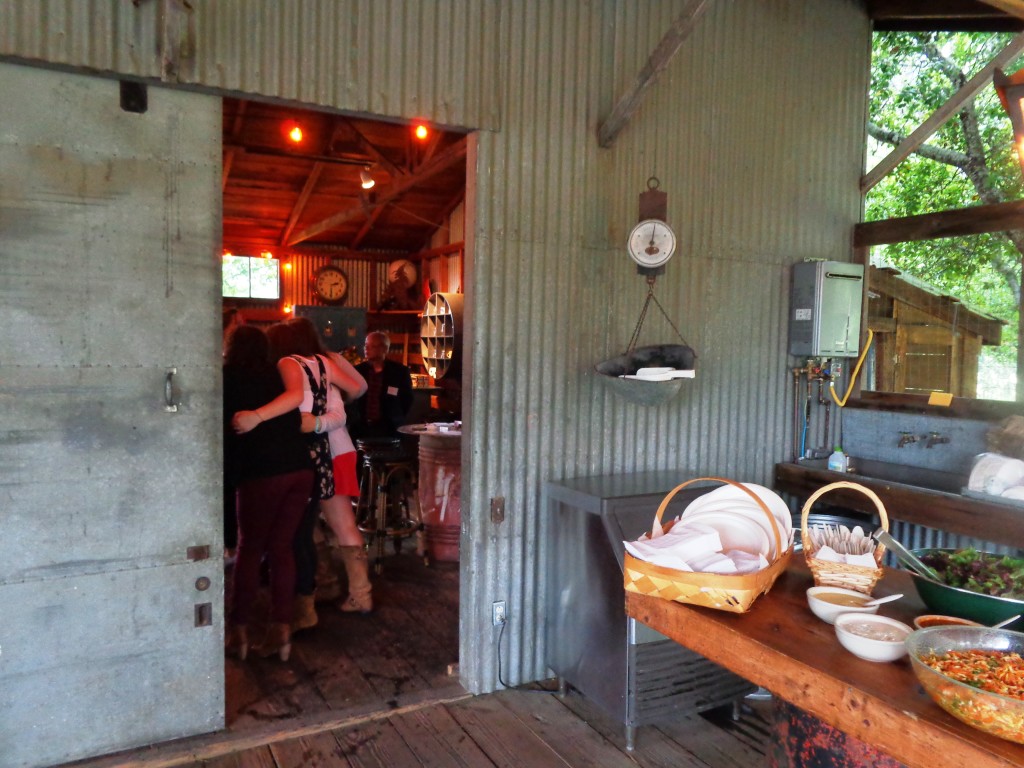 Below is a look at my plate, featuring barbecue chicken, grilled asparagus, roasted beets, cole slaw, sweet potato fries, grilled mixed vegetables, salad and some of the thickest, chunkiest honey wheat bread and home-made butter that I’ve ever had. 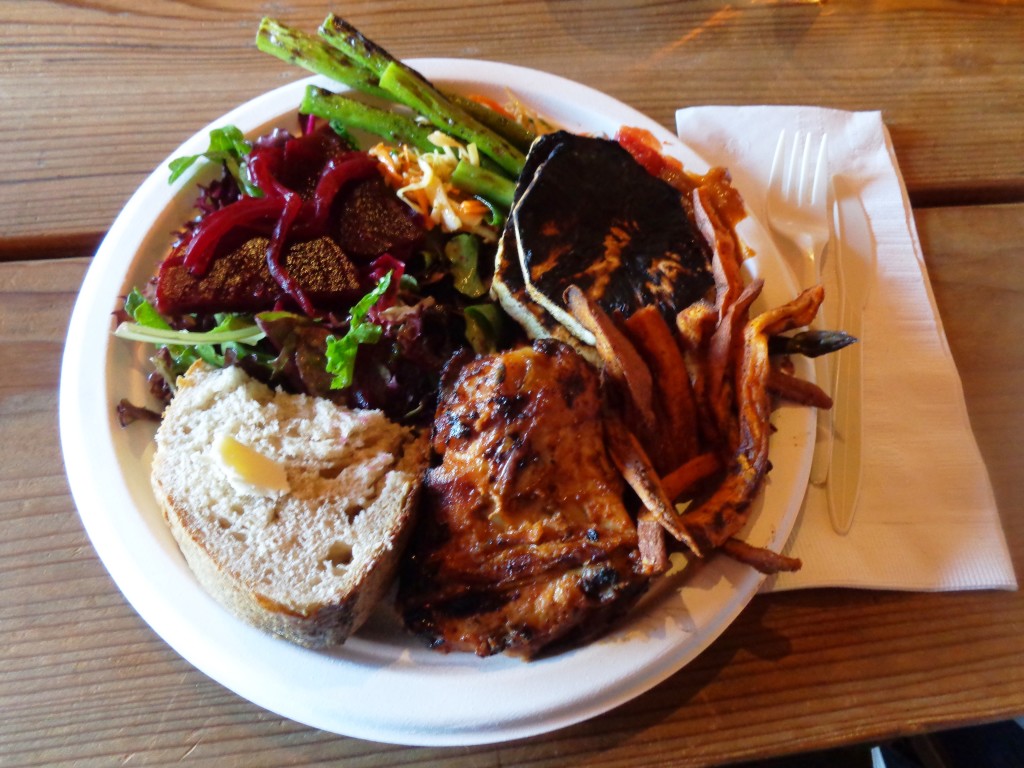 For dessert, we had organic ice cream sandwiches from a place in Berkeley that Teal and Emiko had introduced Dave and me to before called Tara’s Organic. The flavors were so strange, but so good, including green tea, lavender, earl grey and cinnamon. I tried them all. I think lavender was my favorite — it smells like soap, but tastes like ice cream.

Because the dinner was just for family, it gave us the opportunity to spend some quality time with all of the siblings, partners and parents of Emiko and Mateal. One thing is certain, these ladies are loved.

I wanted to take in the fun as much as possible, so I only took a few photos during the evening.

Here is Dave and his youngest sister Gwena, who just finished up her sophomore year of college in North Carolina. 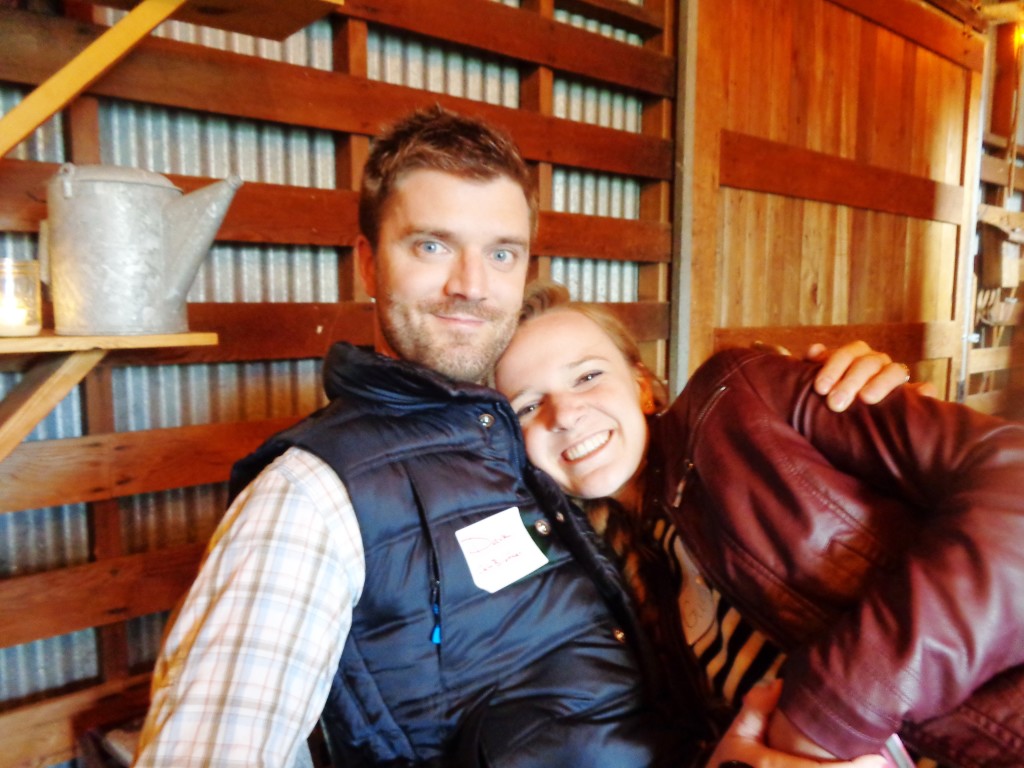 And here I am with Dave’s Dad and his sister, Chrystn. 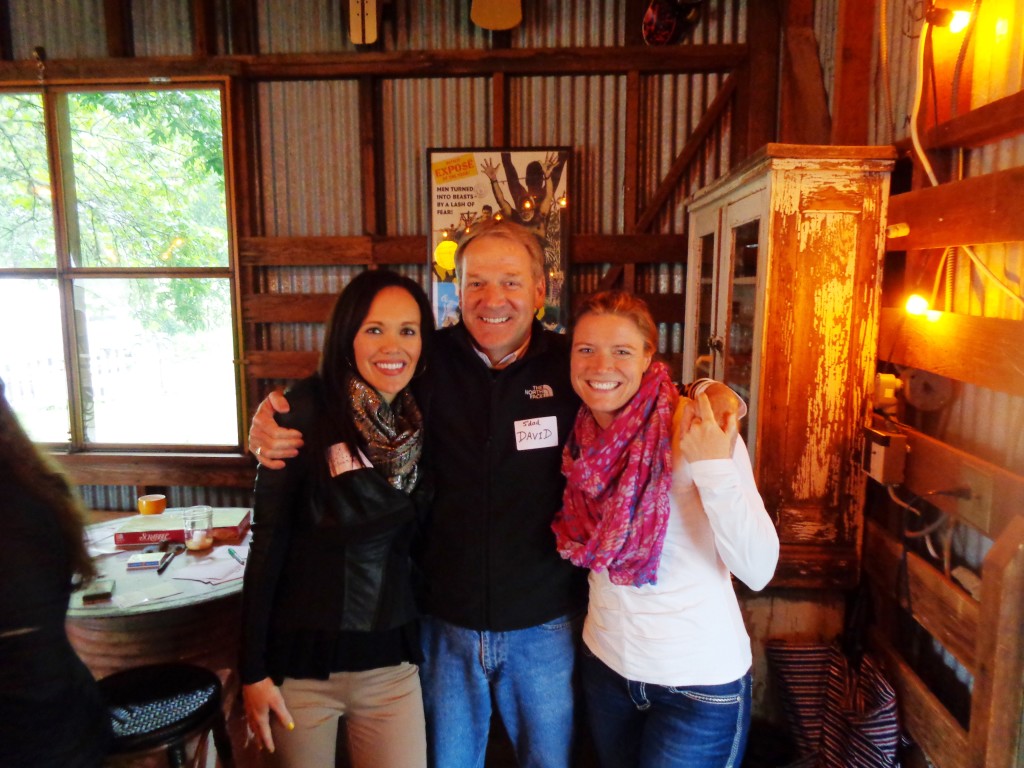 Yes, we were wearing name-tags to encourage familiarity with all the other guests.

Once the family finished speeches and dinner, the rest of the out-of-town wedding guests arrived at the barn for a slideshow and a variety show.

I absolutely love watching slideshows during showers and weddings, because it’s so fun to look back at pictures from a couple’s lives. Teal and Emiko’s slideshow was about 15 minutes and had pictures from their childhoods and their lives together throughout the years. I didn’t want it to end.

Next up, the variety show began, hosted by Teal’s twin, Jess.

The first act was a song performed by the happy couple, in which Emiko played the ukulele. I had no idea she was such a musician, and the two of them sang a lovely little ditty. 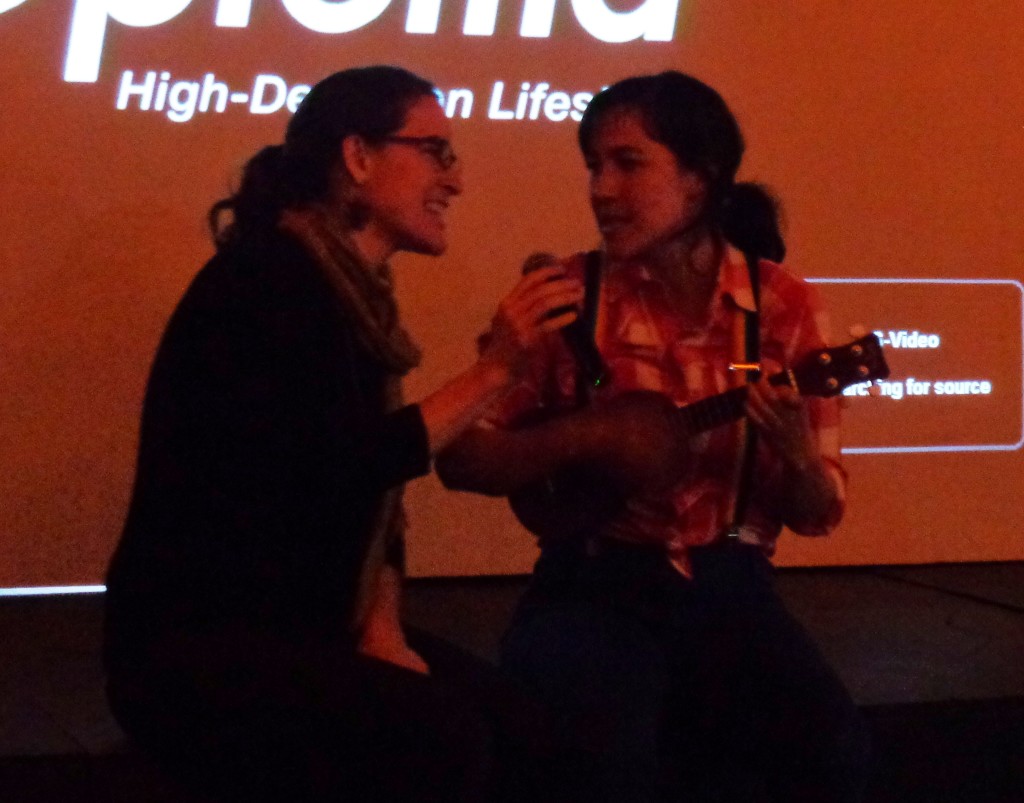 They are just too cute.

Every single guest had the chance to sign up and get on stage. This was definitely the first participatory variety show I’ve ever watched. Having guests share a little bit of their talents or come up with a fun way to honor the couple is a unique take on entertaining people who are visiting a small town like Boonville.

Dave and I didn’t perform, but we certainly enjoyed watching everyone who did. There were skits, dancing, tai chi demonstrations (as well as a chance for everyone to try some tai chi, which I did), a dramatic reading from a childhood diary, two musical performances with a ukulele and much more. 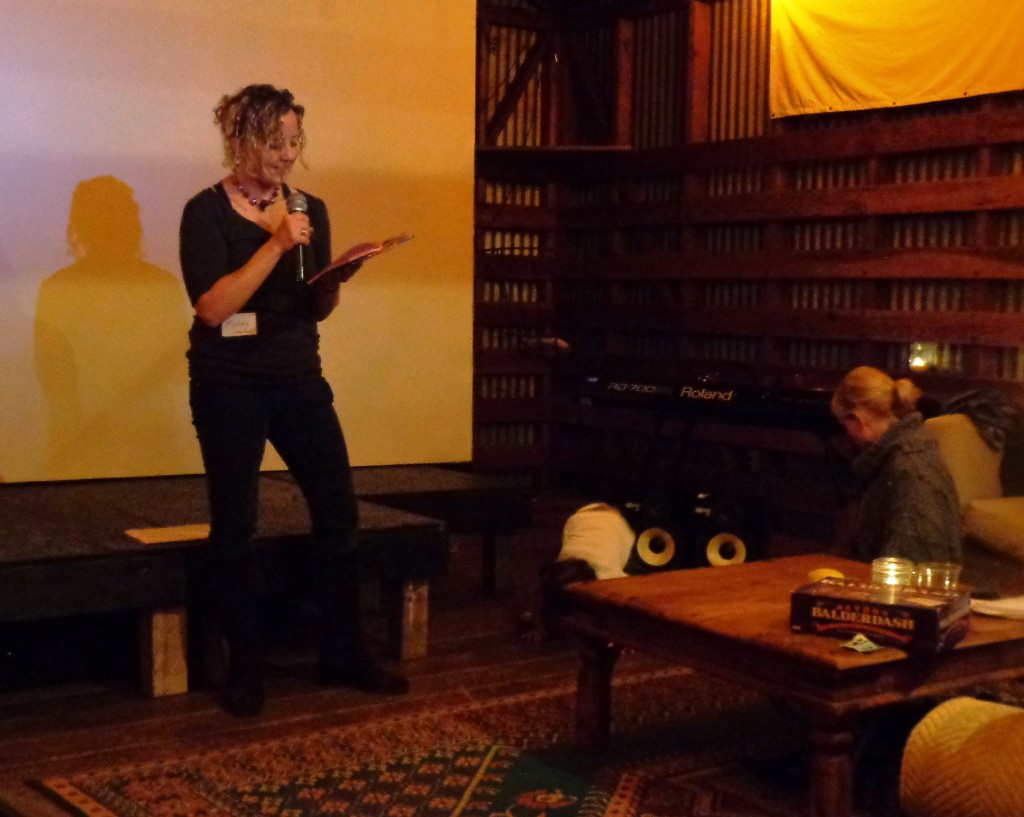 Once the acts were done and the rain had stopped, we grabbed some skewers and went out to the campfire to enjoy some s’mores.

Finally, the night ended with a 30-minute session of candlelight yoga, led by one of Teal’s former students (she teaches at an all-boys private school in Berkeley). I joined in yoga, and it was a great way to calm down and relax after a lively night.

I’m never one to turn down a healthy mind-body activity, and this was definitely the first time I’ve ever done yoga in the night after a big meal and some wine. It was rather soothing.

What a day. With a wine tour, barbecue meal, candlelight yoga and two sessions of dessert, I was incredibly full and content by the time the festivities concluded. Teal and Emiko sure know how to put together a Friday line-up.

Dave and I were back in our little room by 11 p.m., so we could rest up for the main event.

Up next will be a recap of the gorgeous wedding day, so be sure to check back for more.

What’s the most interesting wedding weekend activity you’ve ever participated in?