Hi, friends! I don’t really know what kind of news we’ll be waking up to today from Florida. It was fairly intense all weekend with the changing storm projections, but appeared to lighten up a bit as yesterday went on. I’m glad to say that my parents were able to safely evacuate their coastal home in Southwest Florida to a more inland location and hotel in Orlando. That’s where they are right now.

Also, I’m happy that Facebook comes in handy during times like this, so I could see how my friends were holding up in the storm. As you guys know from my story on Friday, I’ve been through a hurricane, and I wouldn’t wish that experience on anyone. Sending LOTS of love and prayers to my Florida people for continued safety and then a fast recovery.

However, I know that a good portion of the country and world went on with life as usual this weekend, maybe not even knowing much about Hurricane Irma, if you don’t have a connection to Florida or if you stayed away from the national news. In fact, being a slightly bi-coastal gal, when I scrolled through my social feeds throughout the weekend, I saw an extreme dichotomy — the Californians — in Napa drinking wine, chatting about sports, attending weddings, sharing their weekend shenanigans and carrying on with their fun times. Then the Floridians — asking where to buy plywood, gas and water, reporting traffic conditions on the highways while trying to evacuate and saying whether or not they had power where they were. What a contrast. But I guess that’s life. We each handle what comes at us and hopefully have compassion for those who are going through tough things.

Nonetheless, a regular weekend took place over here, outside of the worry, so let’s do a quick recap and then get to the workouts …

I had a doctor’s appointment in the afternoon, which went well (I go once a week now throughout the remainder of the pregnancy). Once that was over, I swung by Safeway for groceries and decided to treat myself to a kombucha, because, yum. 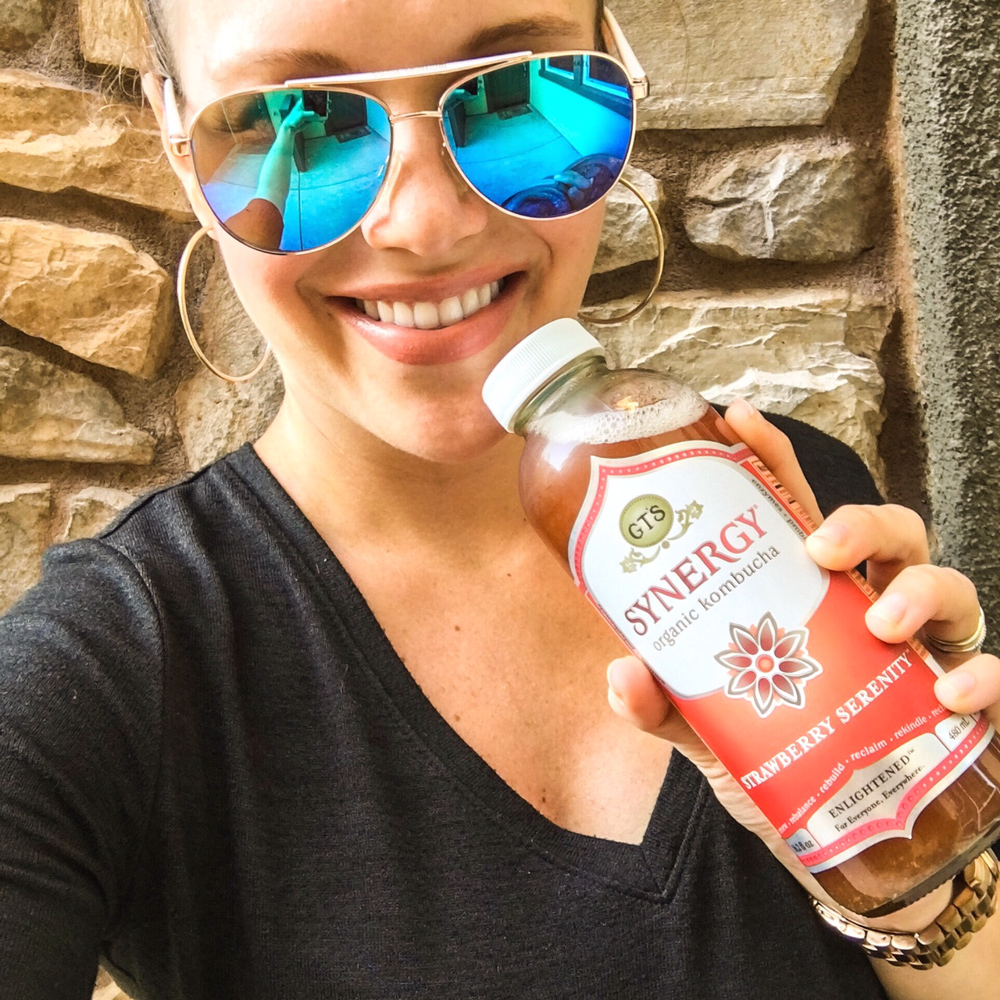 Later that evening, Dave and I had burgers and ice cream at home (let’s be honest, I had the ice cream, Dave did not). We also watched “Narcos” on Netflix — the usual. Didn’t I just say last week that I wanted to switch to a feel-good show? Well, because Dave and I really enjoyed the first two seasons of “Narcos” and the third was just released, we decided to start it, even though it doesn’t quite fit with what I was looking for.

I woke up super early to check the news of what was going on in Florida and was not pleased to see that evacuations had been suggested for where my parents live over the course of the night. I texted my Mom, and then spent a lot of time asking friends around the state what their plans were and what they were hearing. After all that texting, Dave and I spent much of the day in a childbirth preparation class in Walnut Creek, put on by our hospital, along with another 15 or so other expectant couples.

I kept an eye on my phone to check on the updates from my parents as they traversed the state, while also trying to pay attention to the real-life birth videos and discussions that were taking place in front of me. Quite fun! Those birth videos … did we really have to see that?

Dave and I loved the instructor of our class, who was a retired labor and delivery nurse, and she definitely told us everything we need to know about how babies are born and what to expect in labor and in the hospital. She was actually pretty entertaining too, and kept us engaged for the more than six-hour class with some dry jokes and total realness. But seriously, I got so uncomfortable physically sitting in that chair for so long. I moved around every couple of minutes, propping my feet up and stretching, and nothing helped. I’m officially in that uncomfortable stage of pregnancy.

We had a lunch break during the session, and I had a craving for a bagel sandwich. The good news is that we were in an outpatient office-type center right near downtown Walnut Creek, so we were able to walk just a few blocks away to House of Bagels to get just what I needed. Yum (see below)! I actually couldn’t tell you the last time I had a bagel sandwich, and it was quite satisfying. (And I have to thank the person who commented on Friday’s pancake mix giveaway post about her bagel sandwich, because I think that’s how it got in my head. Speaking of that post, did you enter the giveaway yet? It closes tomorrow.) 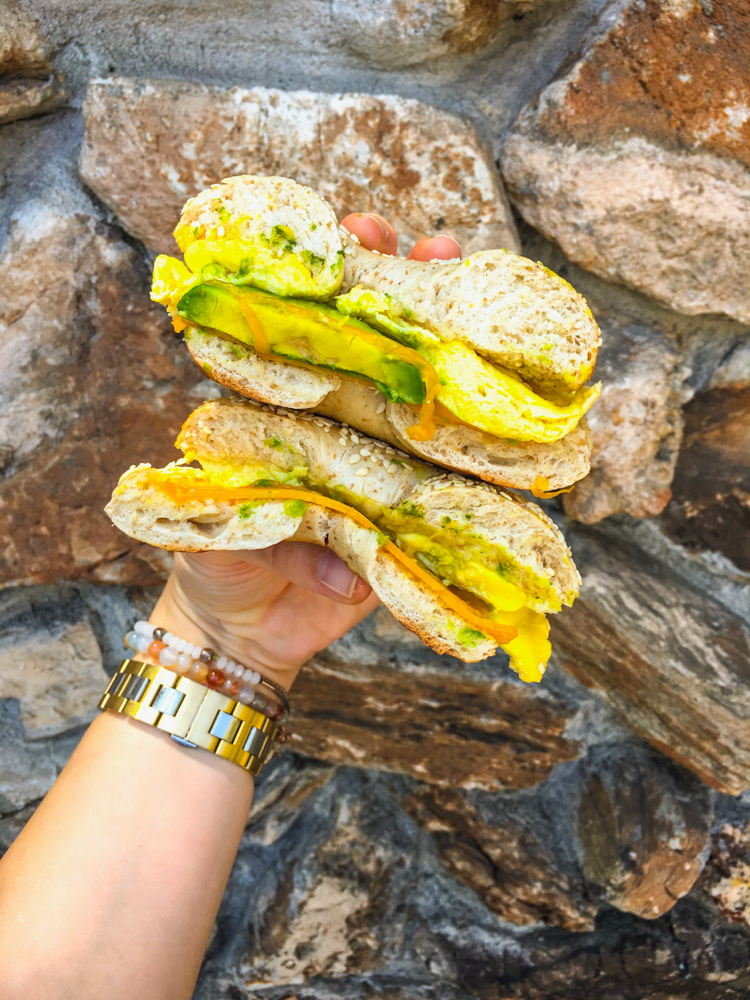 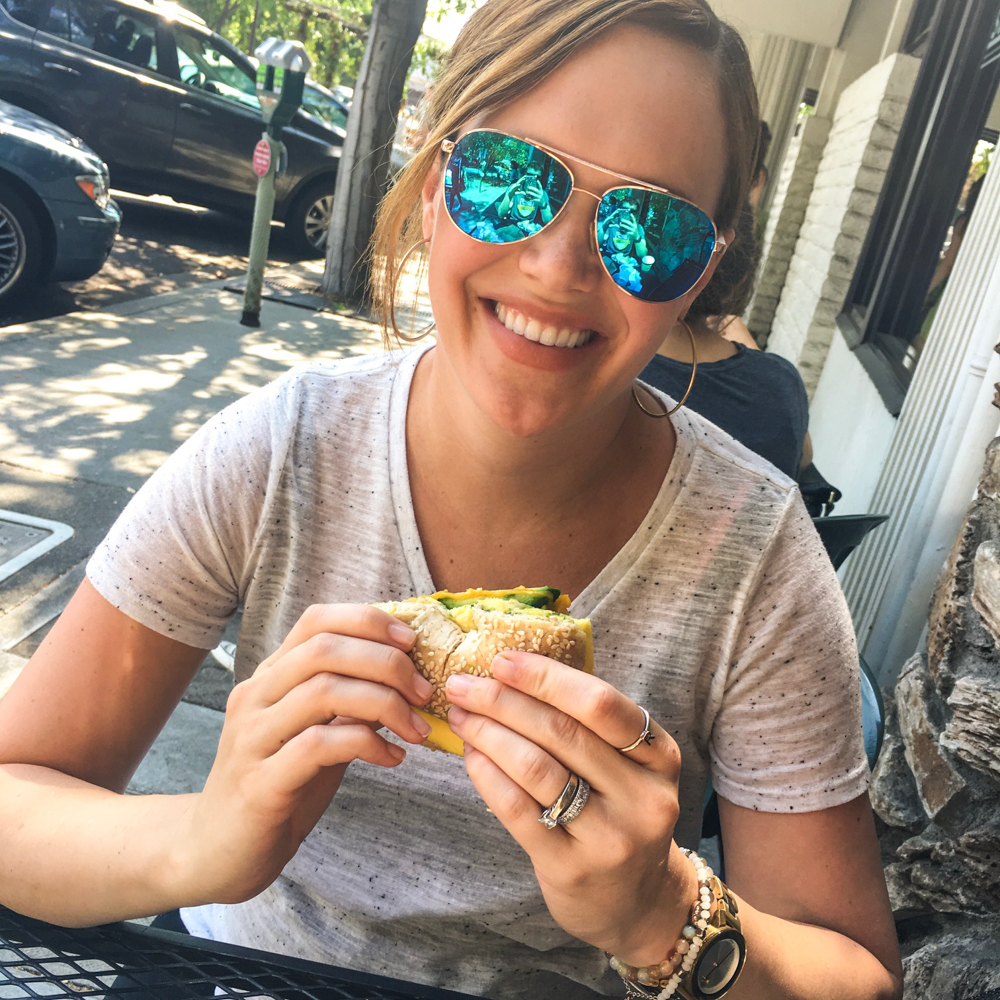 (Digging into my sammie and wearing one of my comfiest maternity tees.)

Our class ended shortly after 4 p.m., and we swung by our friends’ house to pick up Rudy (he spent the day with them, because we were going to be gone, and they love Rudy time), and then I took a much-needed nap. I take naps almost all weekend days now, in spite of my many hours of sleep at night, basically because I know my sleep is going to change very soon.

That evening, we met some friends (the same friends who watched Rudy during the day) for dinner at MoMo’s in downtown Walnut Creek. And right before we left was the perfect time for my latest bump pic … 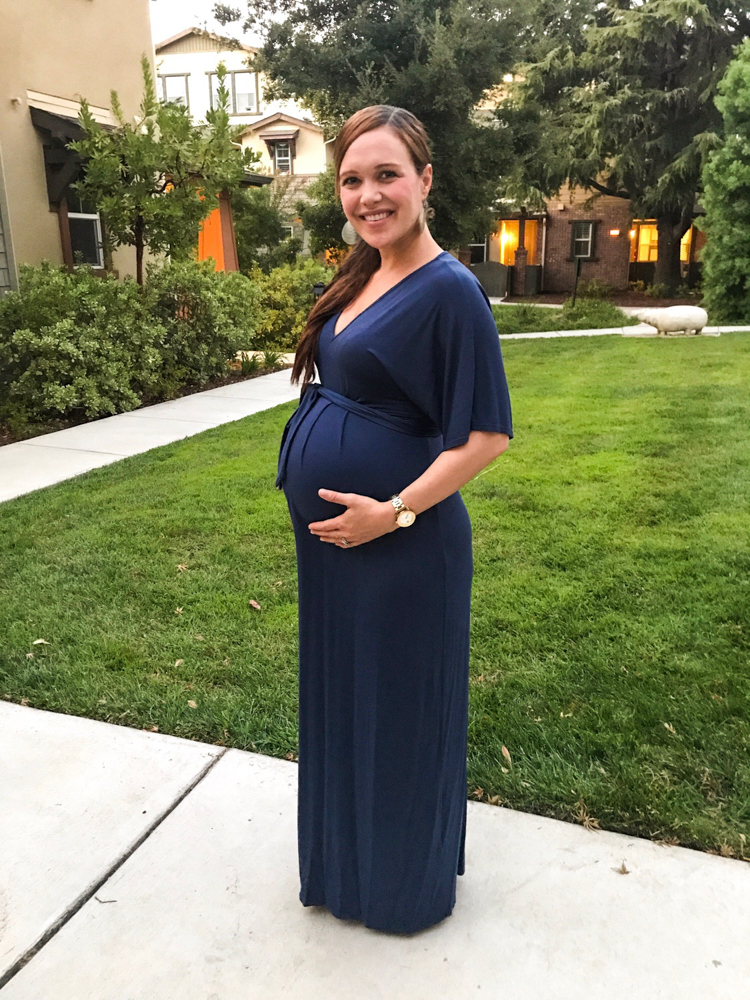 (Shown at 35 weeks pregnant in this maternity dress, which I think I’ll be able to wear post pregnancy as well. And as far as the bump? I swear it gets bigger each day.)

Dave and I had been to MoMo’s a few times in San Francisco, and a location just opened near us out here in the Creek. While the restaurant is big and nice inside, the service was so-so, and the food was just average, but the company was very good — so we had a nice time overall. After dinner, we all walked over to the Creamery for some ice cream, which was the perfect sweet note to end the night. I love that place!

Not a lot to report on Sunday. I woke up well rested and decided to make us waffles for breakfast. Then, when Dave went off to the gym, I elected to take Rudy for a 30-minute walk and do some prenatal yoga in the living room instead of joining him for a more formal workout. It felt right. 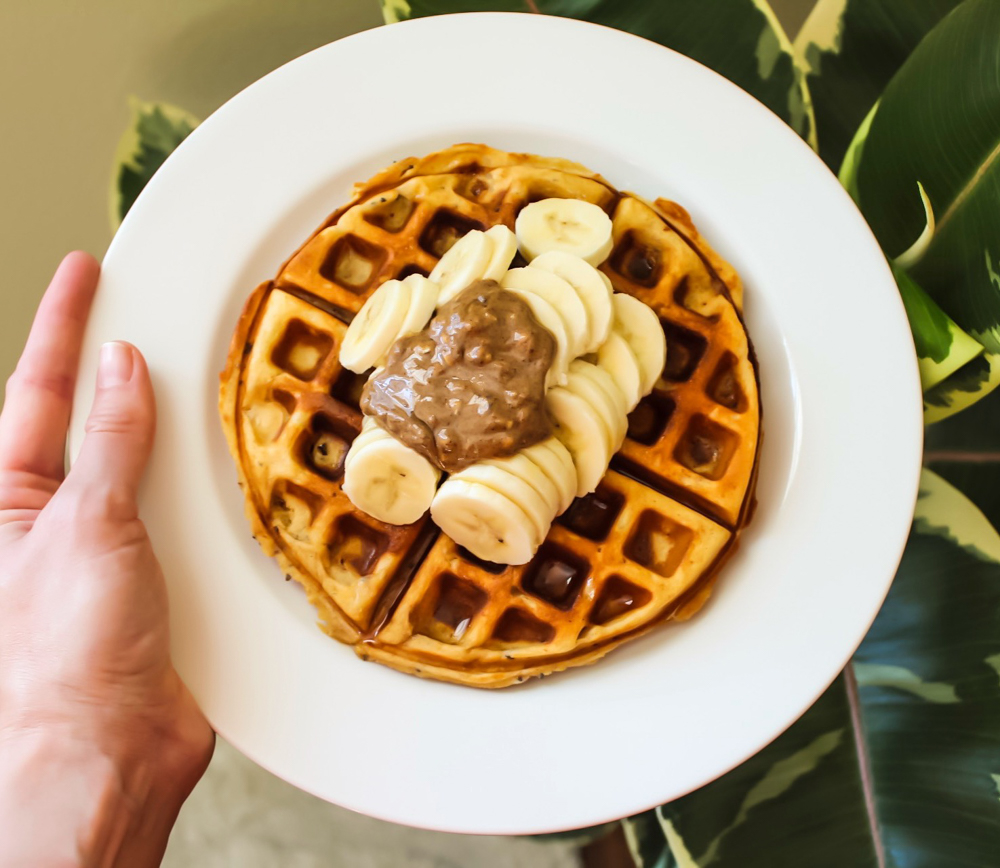 After some work on the computer for me and a bath for Rudy, Dave and I went out to lunch at Tender Greens, which has some new items on the menu (and a new logo too apparently), and I got a hot plate with the new salmon, seasonal veggies and kale salad. So good! Dave tried the new shrimp bowl, and he was a fan of that too. Here’s our spread, along with some fruity beverages … 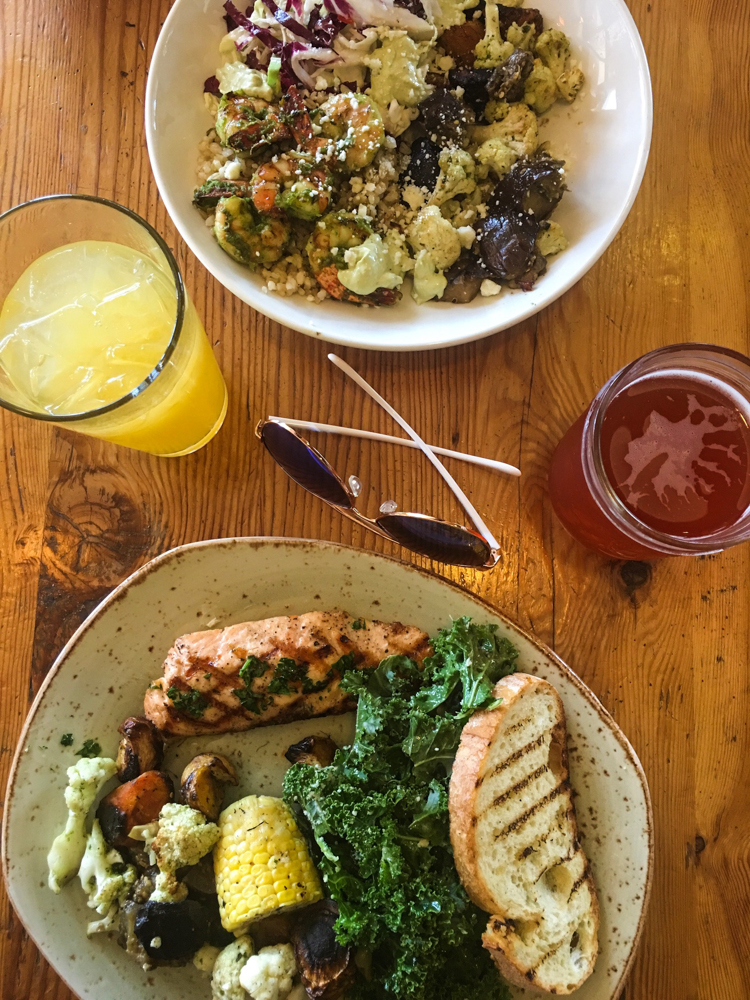 The rest of the day included some errands, another nap, talking with my Mom about the storm situation and hanging out at home. Like I said, not a lot to report, but it was a fine day. And that was the weekend!

Here’s how I’ve been moving lately …

Woohoo! I made it through another week of pregnancy and managed to exercise most of the days of the week. I kept it balanced with four at-home sessions of yoga, two walks, two barre classes, a BODYPUMP class and some weights. Not bad!

It felt good to return to BODYPUMP as a student after a couple of weeks away, and also, I ended up slightly sore from my solo full-body weights workout earlier in the week too, which hasn’t happened in forever, so at least I know I worked my muscles to fatigue.

My big tummy is in the way, and I’m constantly out of breath, but I keep reminding myself that movement is very important for me right now, so I’m making it happen as best as I can, while I can.

Hope you have a great day, my friends! My Florida peeps: I’m sending you all sorts of good thoughts! And for everyone not affected, if you’re feeling generous, here’s where you can donate to the disaster relief efforts — they will need it.

One more thing: This post is going live on September 11, which is a majorly tragic day in U.S. history. A moment of silence for the heroes and everyday people who lost their lives on that day.

A childbirth class, food and weekly workouts at 34 weeks #pregnant on A Lady Goes West today ... Click To Tweet

What was your best workout of the week?

Did you watch any of the news on Irma? If you’re in Florida, are you okay? Let us know!