To keep the holidays alive just for a few more days, today, I’m sharing all about Christmas 2015, which I spent in Southern California! 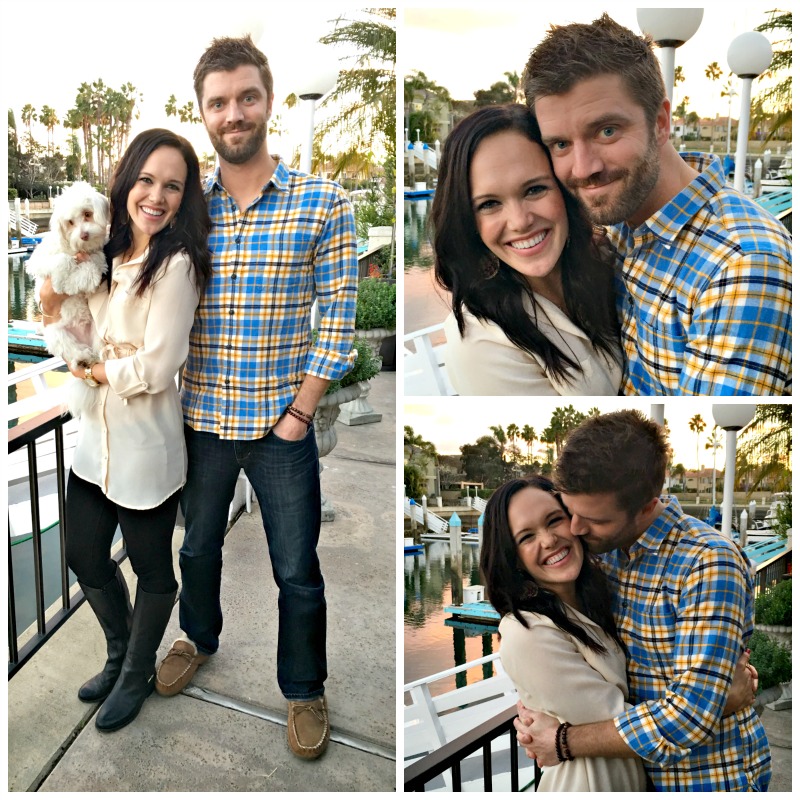 A little sunset photo-shoot had to happen, especially with a view like this.

After a fabulous birthday in Los Angeles, on the morning of Christmas Eve, Dave and I packed up and headed south to San Diego. About a year-and-a-half ago, Dave’s parents relocated to Coronado, an island off of San Diego, from St. Petersburg, Florida, and this was our third trip down to see them. We had a great time there for Thanksgiving last year and this past July. The weather is great and there’s plenty to do, so we expected much of the same during this visit for Christmas.

Reasons why? All of Dave’s four sisters had made arrangements to be there from far and wide, and it was the first holiday we’ve all spent together in several years. So good to see the greater Pitt clan!

When we arrived on Christmas Eve, we joined the family around the living room table to chat and catch up. We also got to meet the newest addition, Dave’s niece, baby Rumi, born just three weeks ago. An afternoon nap was in order, which took place before we sat down for a delicious dinner at the table. Once dinner as over, we opened our special holiday pajamas, put them on and got comfortable by the fireplace.

Due to travel for many of us, we all were more than ready for an early bed-time that night, so tucked away we were before 10 p.m.!

On Christmas Day, the family took their time getting up and having breakfast. We were joined by some other visiting family members and had a big group sitting around the living room to open tons of presents. It took a few hours to get through the gifts, which included a “Secret Santa” exchange among the siblings and spouses. Wouldn’t you know that I pulled the name of the person who drew my name too? And yes, we both loved each other’s gifts. 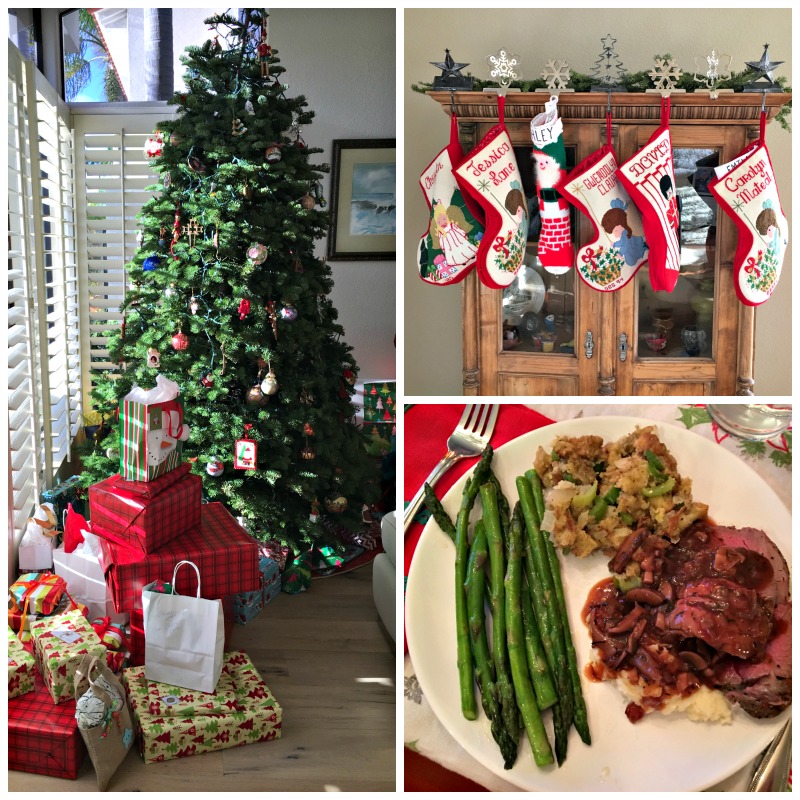 Stockings, presents and beef tenderloin? Looks like a holiday to me!

After we opened presents and put away our loot (I got some great stuff, which may or may not be coming to a “Friday Favorites” near you soon!), Dave and I hopped in the car with Rudy to head to downtown Coronado for a little snack and to pick up some last-minute ingredients and groceries for Dave’s Mom for dinner. For our dining pleasure, we stopped by Juice Crafters for a protein acai bowl and split it in the car. It was full of fruit, nuts and almond butter and was quite delish!

In the early evening, we had a festive and tasty dinner with the big group, drank a little wine and played a game of “celebrity,” which is a mix between charades and a “Who am I” game. And that pretty much rounded out the day. Once again, another early night was in order for us all.

On the day after Christmas, Dave’s parents, his little sister and I drove into downtown San Diego to explore the Gaslamp neighborhood, which is a trendy spot full of shops and restaurants. We parked, walked around a bit (it was cold and windy!) and found a fabulous lunch spot called Cafe 21, marked for its healthy food options. 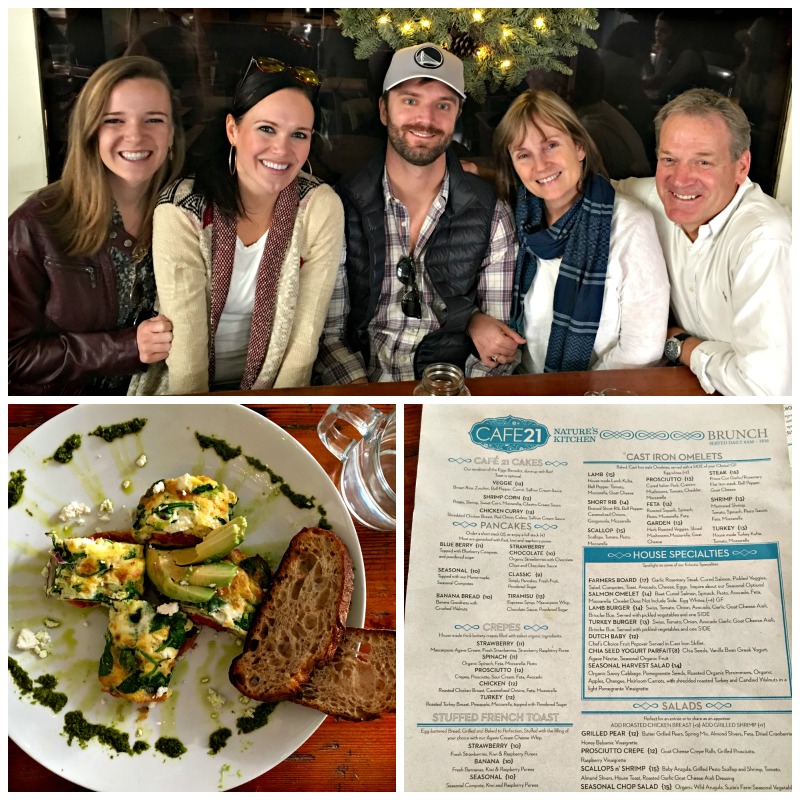 I’ve been dreaming about this omelet, which was filled with salmon, ever since I licked that plate clean. Good work, Cafe 21.

We were all super impressed with our meals and had our eyes on plenty of items we didn’t get to sample during that visit. In fact, I hope to go back there one day and order one of the famed sangria flights, which I saw many tables indulging in. After lunch, we walked around a bit more to shop and then headed home for a very chill evening with Dave’s older sister and her boyfriend.

That night, after a few family members had left, our smaller group played Super Scrabble and Smart Ass, ordered five uniquely topped pizzas from Fire + Fly and dug into some chocolate cake and ice cream. Rudy was the star of the show that night and continued to provide constant entertainment for the entire group — especially with his brand new hilarious little growl he does every-so-often when he gets scared. It was perhaps my favorite part of our entire visit, laughing with the family and trying our hand at trivia.

Of course, once again, we hit the hay early in order to prepare for a big drive back. Yes, we got a lot of sleep over the course of just a few days in San Diego, so it must have been needed for the both of us. 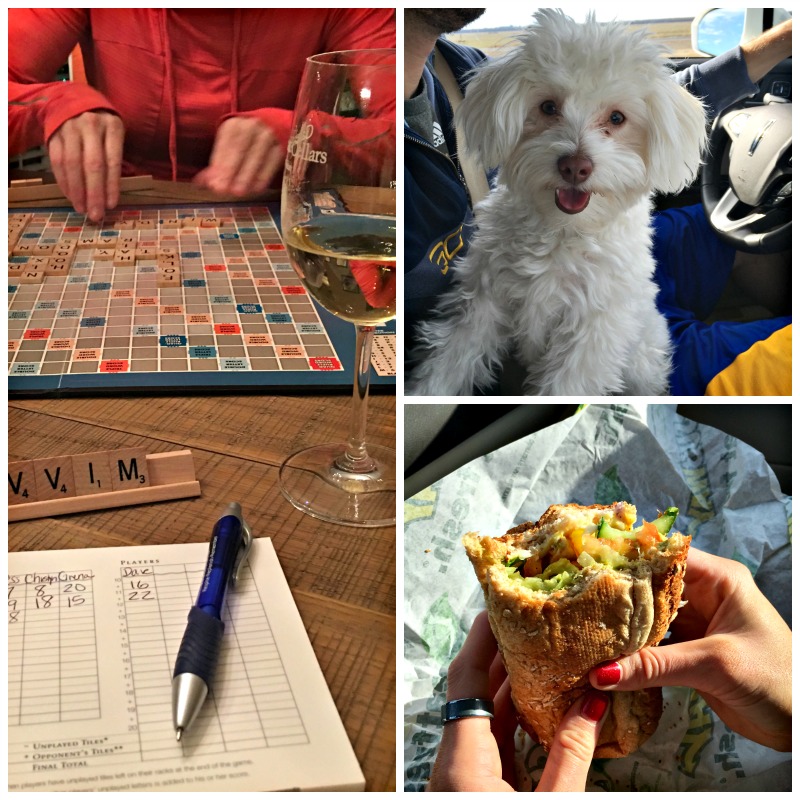 Just some casual boardgame fun, a happy road-tripping puppy and my delicious turkey sub from the one-and-only Subway, consumed in the car.

On Sunday, Dave and Rudy and I were on the road by 8 a.m. to head back to the Bay Area. Although we had no problem getting down to L.A. or San Diego earlier in the week, we didn’t have such good luck on the drive back at all. In fact, what should have been a seven-to-eight hour trip took us more than 10 hours, filled with traffic slow-downs. Not fun! However, Rudy sat on my lap in the front seat the entire time like an angel, so he provided some good distractions for me. I’m pretty sure we’ll go back to flying rather than driving on our next visit to San Diego. Nonetheless, a lovely Christmas was had by all — made even sweeter by time with Dave’s family — and now we only have to wait 360+ days until the next one!

How was your Christmas holiday?

Would you rather drive or fly?