Welcome to the weekend, friends! Before you head off on your adventures, I have another class review to share.

Over the past few months, I’ve visited more than a dozen gyms and studios to try various classes. Yesterday, I was invited to try Avant-Barre’s Signature class at lunch-time taught by the studio’s owner. The lovely Nini, shown below, is a Bay Area native and a former dancer. Nini was nice enough to speak to me after class and told me she used to work in the corporate world. She took a leap of faith to turn her love of fitness into her full-time job as an entrepreneur, and that’s how Avant-Barre got started. 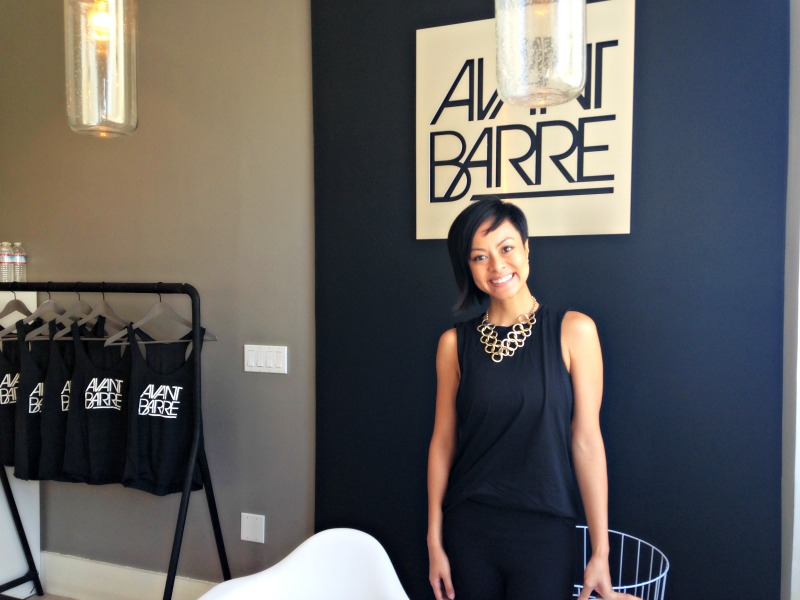 I wish you could see the backside view of Nini’s outfit, because her top was actually open back. She wore that get-up while teaching, statement necklace and all, and I loved that. I don’t think I can wear jewelry for the high-impact classes I teach, but it made me wish I could add a little more style to my sporty workout attire. So very chic …

Avant-Barre began as a pop-up and has been open in its current SoMa neighborhood location since June. The studio is very small, but large enough to accommodate everything you need. A small check-in desk, a well-styled sitting area, a cute bathroom offering hari-ties and toiletries, some cubbies for your belongings, a changing room and a brightly sun-lit studio. 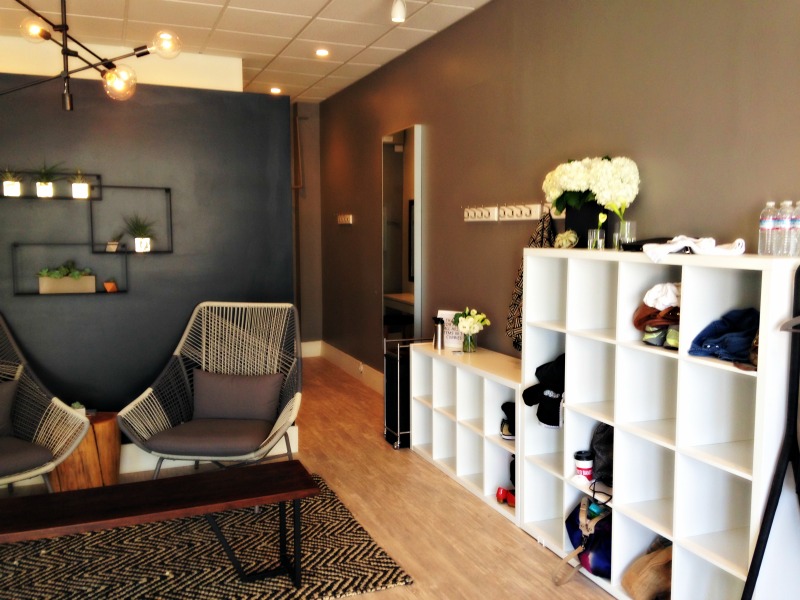 The first thing I could tell when I arrived to take my class at Avant-Barre was that there were definitely regulars in attendance. There are a few tech companies with offices in SoMa, and I’d imagine a lot of people come from there on their lunch-break. They all said hello to each other, and Nini knew everyone by name.

The studio was definitely one of the smallest I’ve visited, and every space at the barre was full. Each station was just about two feet from the other, but for some reason it didn’t seem too cramped or crowded once we all piled in. 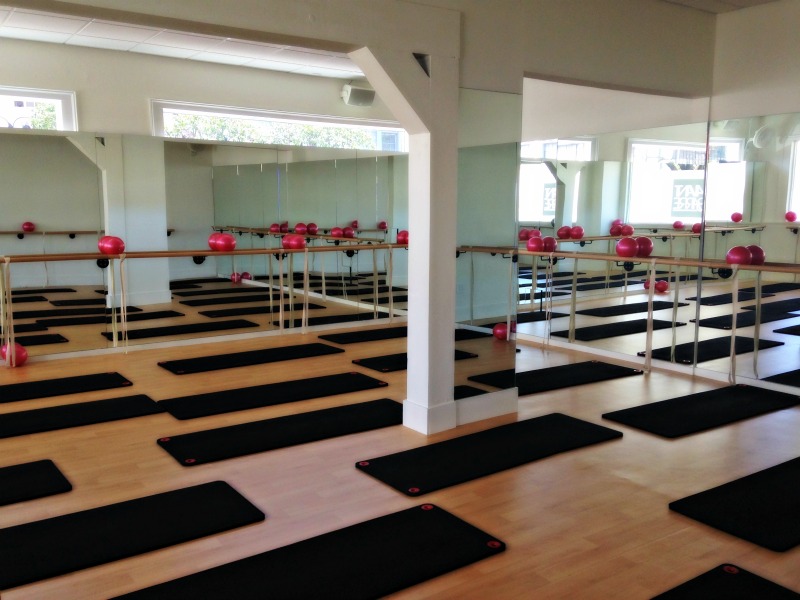 Class started right on time at 12:15 p.m. We started with knee lifts in place, then did some wide plies to get our lower bodies warm. From there we got down on the mat and held some high planks. Then we moved into a fairly challenging upper-body circuit, including plank shoulder taps, tricep push-ups, a combination of the two moves and tricep dips. None of these moves were ones that I had done in a traditional barre class before, outside of the plank, so right away Avant-Barre was a little bit different.

Then we stood up and began a large section of leg work at the barre, much of which was just like I’ve done in other traditional barre classes. During the barre portion, we did a bunch of little pulsing leg lifts on each side with our legs kicked back. We also placed a barre ball between our legs for more mini squats. Nini told us that the ball helps keep the knees in line while squatting, and of all the barre classes I’ve taken as of late, it was the first time I learned that tip. I love learning something new and appreciated it. Nini’s frequent mention of the proper muscle groups and activation made me very happy, because as a trainer, I knew she was on top of her stuff.

After the legs and thighs portion, we did some calf raises, which is something I love to isolate, but never do on my own. Then we got down on the floor on our backs for more core work. For the core, we did bicycle crunches and leg drops, while holding onto some bands from the barre. Next up, we all moved to the center of the room for a little cardio. The cardio section was just under five minutes, and we did squats and had the option to add some small hops in between for a heart-rate kicker, and this was the only time I worked up a bit of a sweat. In fact, I would have liked to have done a little bit more cardio. To finish up, we did more core and stretched.

As I always mention during class reviews, if appropriate, I love for the instructor to walk around and correct participants. Nini did just that and she even called everyone out by name when doing so. She made small physical adjustments are well as verbal instructions from the center of the room. Another plus in my book.

What was different about Avant-Barre?

It was totally informal. Nini never used “seat,” in place of “butt,” never called out “changes” and didn’t use a ton of dancer terminology. She just said the normal words you’d expect, and the words you’d need to know to do moves properly. It was less stuffy and less strict than other barre classes, in which all you hear is “tuck” “pulse” and “zip it up.” In fact, she would tell us what we should be feeling in our bodies, so we could get ourselves there. It felt like a very easy and non-intimidating way to be coached. She used a normal voice and didn’t talk like a drill sergeant or angry dance instructor.

Nini used to work at a larger national branded barre studio, and I’m guessing she created Avant-Barre to be a little bit more laid back. Unlike other barre classes, we didn’t use any weights at all, but we utilized our arm muscles during the push-ups and holds. I still felt some good shoulder work, although not as much as other classes. The leg burning was the high point for me, and there we reached some good points of fatigue. Our transitions from move-to-move were slower than other barre classes, but we still took each muscle group to fatigue and then stretched it before moving on. 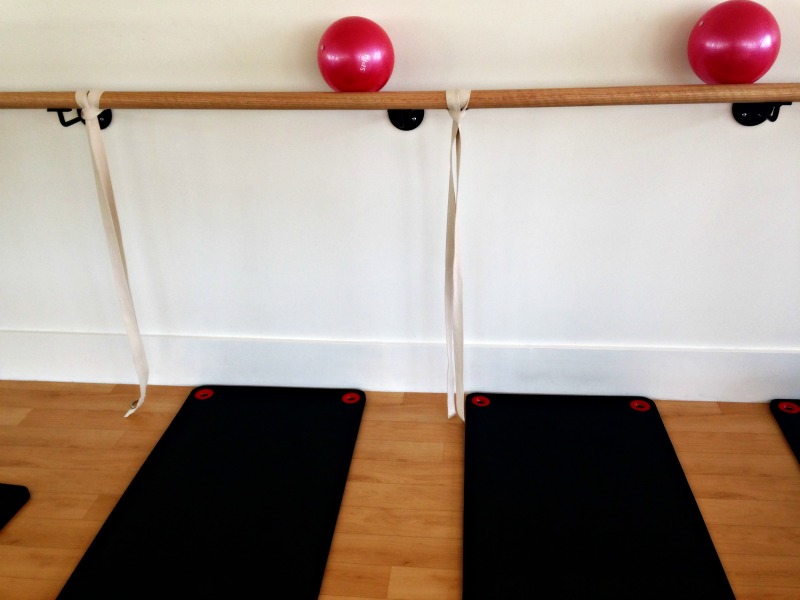 I can definitely see why people get addicted to barre classes, because you are absolutely certain you are working the right muscles during the small pulses. Avant-Barre delivers in that department. While this particular class was not as hard as some of the other classes I’ve taken, like Cardio Barre or Pop Physique, it was still a good workout. And it went by very quickly.

This type of workout seems very welcoming to all levels. In fact, I think you could be newer to exercise and come right in and take all the low options and make it through. You don’t ever have to jump or do anything high impact, so it’s totally doable. The participants weren’t your standard Marina neighborhood Lululemon gals either. They were of all shapes and sizes, and that’s another point of difference about this studio experience.

Oh, and I chose to go bare foot, which everyone else did as well. Because of the wood flooring, you could choose bare feet or grippy socks. I think I prefer bare feet for the barre setting, but that’s not always allowed at other studios with carpeted spaces.

I walked into this recent class review process a little skeptical of barre classes. But I’m starting to become a believer in the practice and technique. However, as a personal trainer, my professional opinion would be to also incorporate some additional cardio and weight-training work outside of the barre studio to round out your week in fitness.

Perhaps the best part about Avant-Barre was the friendly environment. Nini answered all of my questions, knew everyone by name, posed for a picture with me and even sent me away with a cute studio tank. 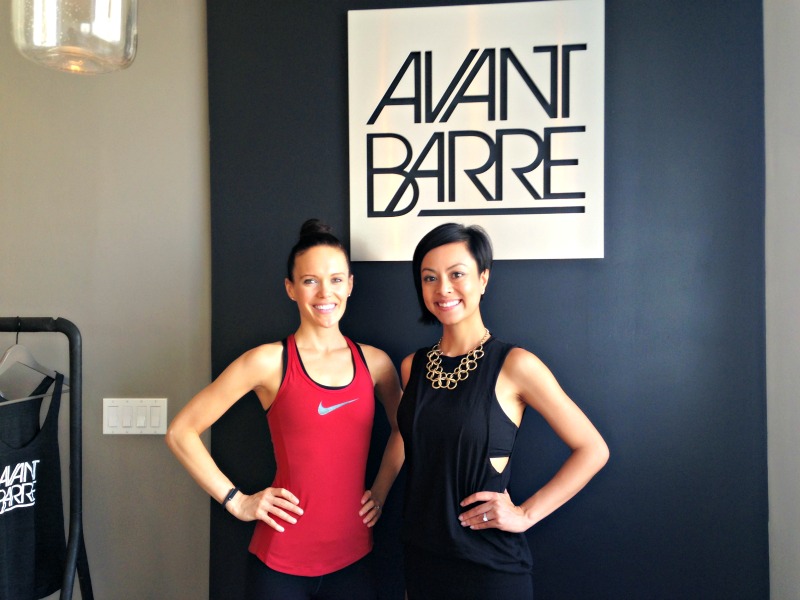 A pretty good way to spend the lunch hour on a Friday.

* Disclaimer: I attended the class at Avant-Barre for free, thanks to one of the lovely bloggers I connected with at an event who just so happens to work there and is the sister of Nini the owner.

Formal or informal? What’s your favorite group fitness style? What’s on tap for your Saturday? Any workouts planned for the weekend?