Let me set the scene for you …

The very in-shape and sweaty instructor comes out of the room, high-fives the eager participants standing closest to the door, then looks around and asks if anyone is new. When a few people raise their hands (including me), he calls us into the room to explain what is about to go down. The first words out of his mouth: “You’re going to be uncomfortable. Don’t panic. We want to take you to uncomfortable.” Well, then.

He then showed us how to operate the Woodway treadmills we would be using (which just so happen to be my treadmill of choice) and spoke to us about the importance of deep breathing, following an in-through-the-nose, out-through-the-mouth pattern. Well I knew I had that one down, because I have to drill that into my clients every single day.

What came next? We all went back outside and the entire group was called in together. Adam, the instructor, and the owner of the San Francisco Barry’s Bootcamp location, gave us each a high-five as we entered the dark room.

This all took place in a setting that has been perfected. You see, Barry’s Bootcamp is a large company that has been around since 1998. The workouts at Barry’s have been called “The Best Workout in the World” by several magazines, and that’s no small feat. They have developed a winning formula, and it’s effective.

I heard about Barry’s years ago, because it was a popular workout for celebrities in major cities. The San Francisco location across from AT&T Park opened a few months ago, and I’m so glad it is part of the ClassPass program, and I was able to check it out last week. 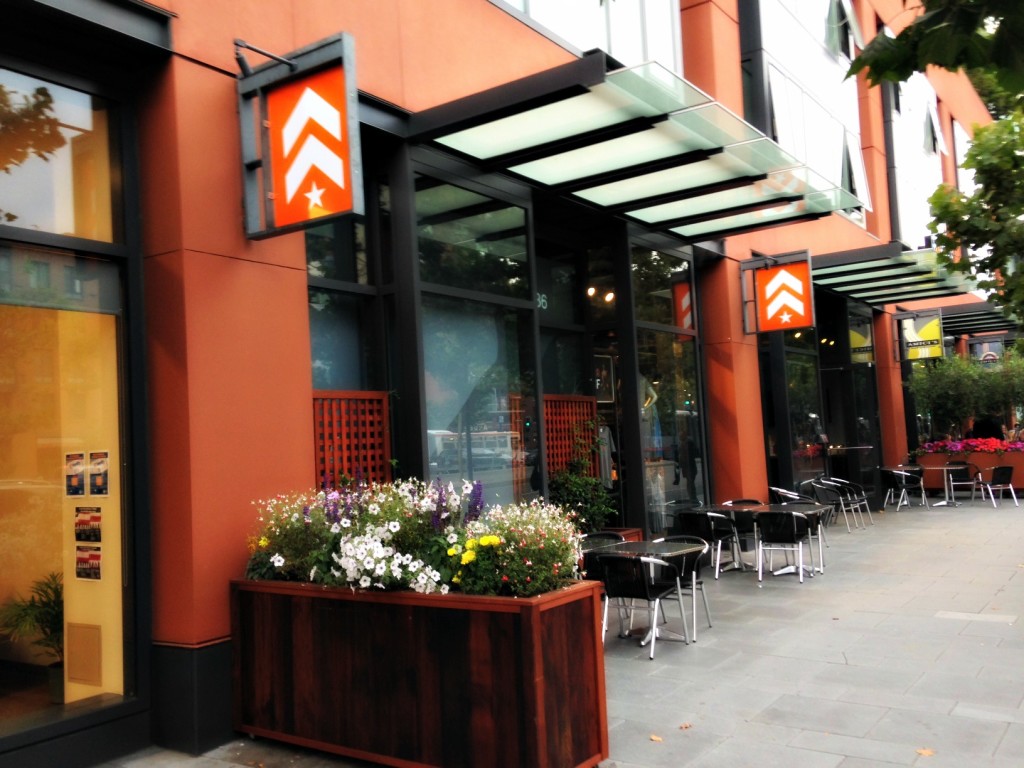 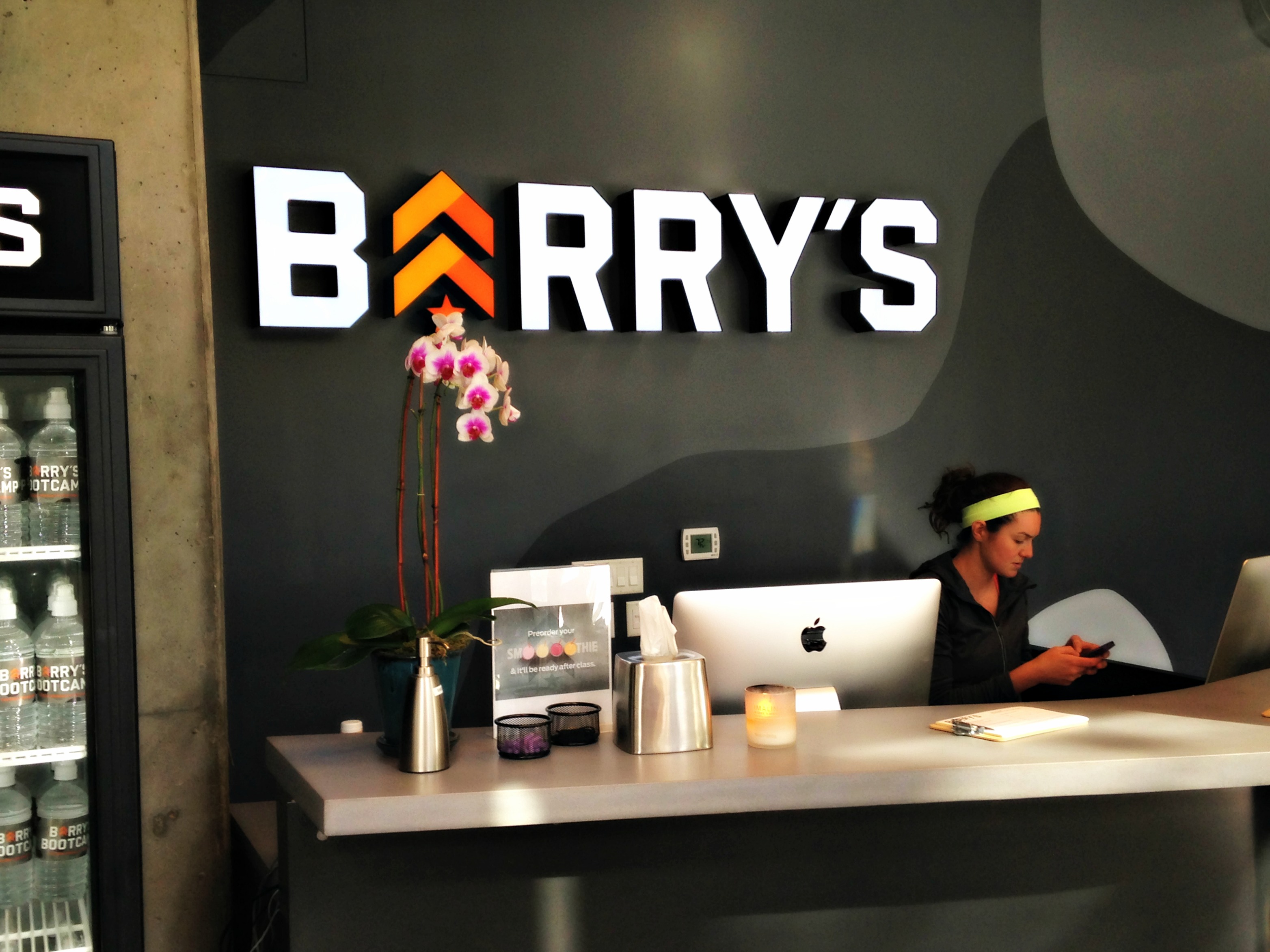 What to expect in a Barry’s Bootcamp class

There were 20 people, half guys, half girls, in attendance for the Friday 9:30 a.m. full-body class. It looked like the studio could fit more like 40 people, so there was plenty of open space.

The cool thing about a Barry’s workout is you can choose your poison to begin: Start on the treadmill or start on the weight-room floor, because everybody will be going back and forth between the two.

Once the doors closed, the lights went down, some rock music blared, and Adam talked us into the warm-up. I chose a treadmill in the middle, hopped on and began walking like everyone else. We took deep breaths and got our legs moving.

The group of people on the treadmills, he called Treaders. The group of people on the weight-room floor, he called Floor. Makes total sense. He would give each group instructions on what to do, then walk around, coach people and motivate people. At times he would count us all down for big finishes at the end of sets, so it seemed like we were always working together, even when using different modalities.

From what I’ve heard, every single Barry’s Bootcamp class is different depending on the instructor’s programming for that particular day. Abs, lower-body, chest and other body-part targeted classes are also offered, and those classes also involve the treadmills. But the class I attended was all about the full body. 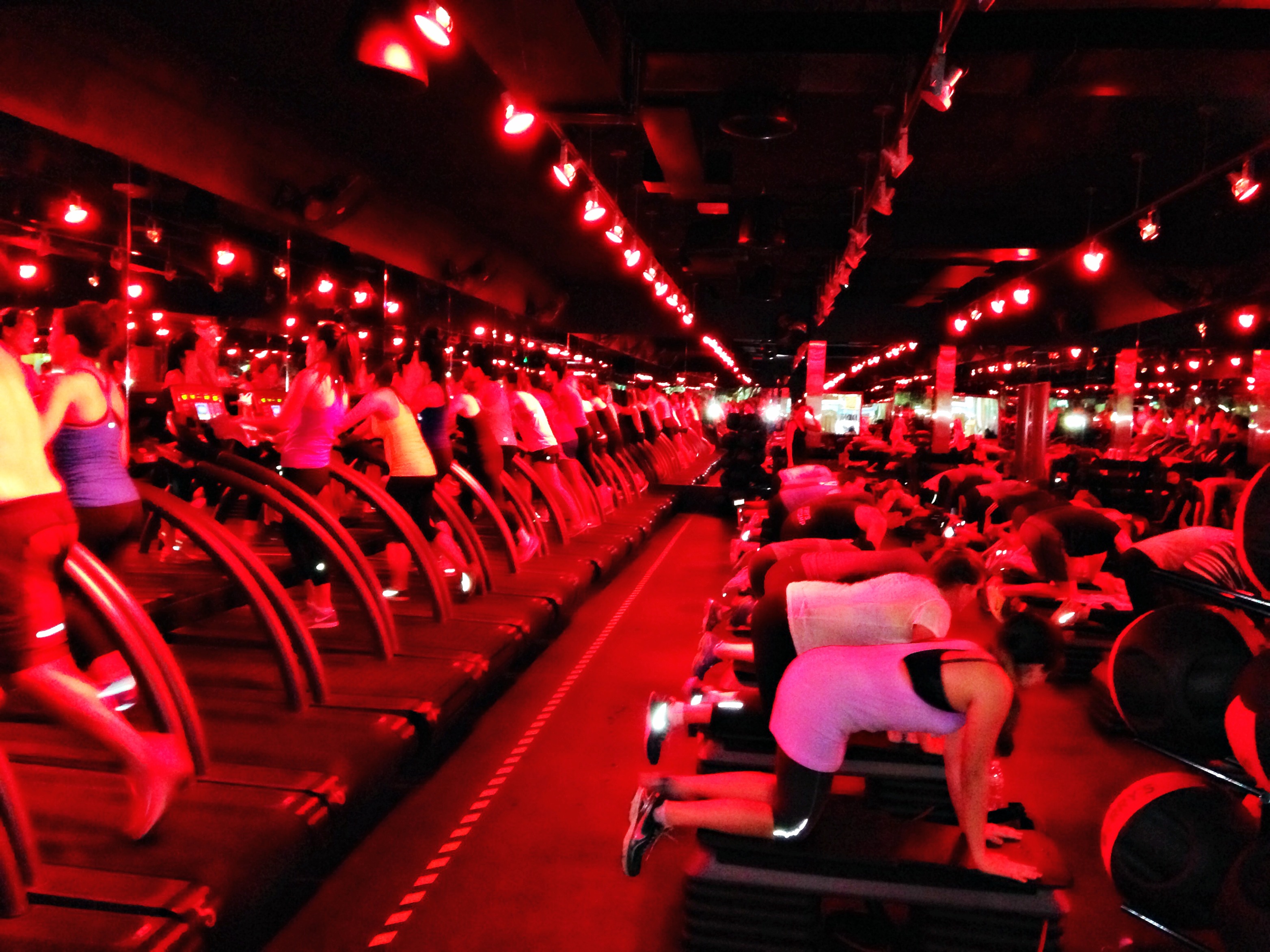 My class was set up with four 15-minute quarters. I went treadmill, weights, treadmill, weights. I’m so glad I went in that order, because I definitely felt more comfortable and relaxed during the weighted portion and was glad to have my first round of sprinting out of the way early.

During the treadmill portions, we did three-to-four sprints per session. Jogging was at a speed of 4.0, 5.0 or 6.0 and running was at least 1.0 more than that. The first treadmill session was all about sprints and the second treadmill session was all about hill runs. At one point, I was running at a 10.0 speed with an 6.0 incline, and that was something fierce. We covered about 1.5 miles during each treadmill portion, totaling about three miles during class.

During the floor portions, we did a variety of moves. It started with jumping jacks with a booty band (resistance band) strapped onto our ankles, then we did leg lifts, held a dumb-bell for front squats and did some core work. In the second floor session, we used a resistance band for bicep curls and tricep extensions and finished up with bodyweight work like push-ups, dips and a ton of crunches. And as far as weight selection with dumb-bells: For women it was 15 lbs. and 25 lbs. for guys, so no tiny weights here.

At the end of the four quarters, everyone came to the floor for a five-minute stretch and cool-down.

Class ended just as it started, Adam stood at the door and gave every single participant a high-five as we walked out. We were drenched in sweat, but feeling on top of the world.

After class, I had a moment to pose with Adam (on the left) and one of the Barry’s team members on the business side, Justin (on the right), who also took the class that day. 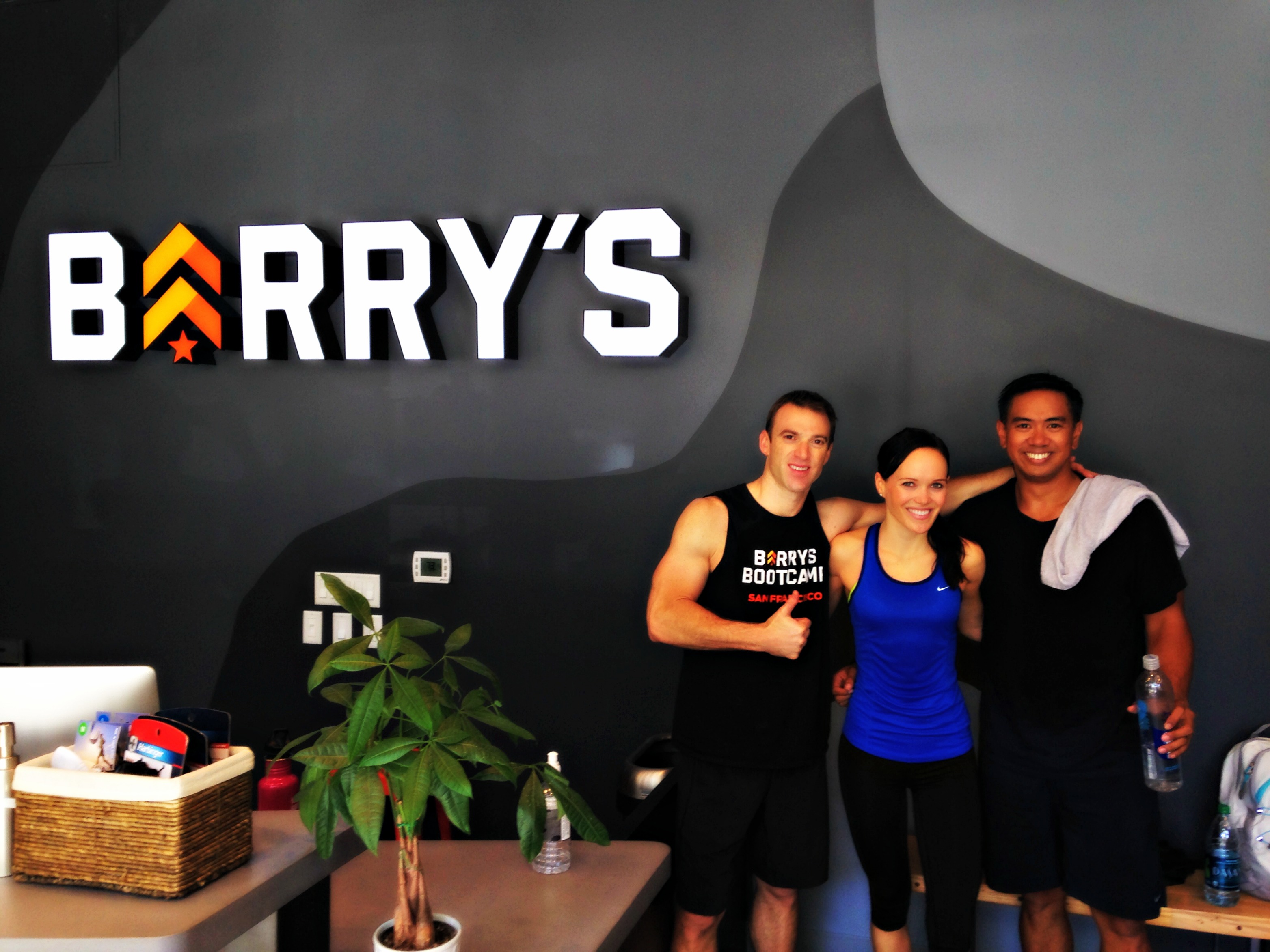 How hard is Barry’s Bootcamp class?

It’s not for beginners or those who are new to working out.

Moving from treadmills to weights means you get a huge cardio benefit, as well as resistance training in one session. Your heart-rate goes up and your body has no idea what to expect, which is great for overall fitness gains. Although you could always slow down to a walk or put your weight down if you needed, the setting just didn’t call for that. So it’s all about going hard.

I pushed myself. So did everyone else. I didn’t really see any quitters the entire class. We were given ranges of speeds on the treadmill to shoot for and ranges of weights to use as well. I chose the high option every single time, and I never needed to back down. Luckily, with all the BODYATTACK and BODYPUMP classes I teach, I’m definitely able to stand a little cardio and muscle burn. In fact, I felt like I could power through Barry’s Bootcamp almost better than an easier barre-type class, just because my body prefers the bootcamp setting.

Don’t get me wrong, it wasn’t easy. In fact, I went faster than I’ve ever run on the treadmill before. So fast that I got nervous at one point that my legs wouldn’t go that fast. But they did. And the next round, I pushed even harder and went even faster. It’s funny what you can get yourself to do in a dark room with night-club lighting, loud pumping music and an instructor barking orders at you, in the most motivational and sometimes curse-word-laden phrasing.

I went to breathless in the running and my legs were burning. I went to total burn and fatigue in my muscles (particularly my core) during the strength-training portion. Yet, I felt so awesome the whole time. I truly fed off of and loved the energy of the whole scene. In fact, there was one point during a sprint on the treadmill that Destiny’s Child’s “Survivor” came on, and man that got me through a tough run.

The music in my class was totally diverse. It started with rock, moved to hip hop and rap, and ended with some slower cool-down appropriate tunes. It was loud and bumping and fueled the workout.

Something about the orange lights and darkness seemed to put everyone in a go-hard mentality. It looked like a club. And it was super hot and sweaty and just felt right.

A few other things to note: There are hairdryers in the bathroom, really nice lockers and a smoothie bar that apparently has delicious beverages. In fact, you can pre-order your recovery drink and have it waiting for you after the workout. That’s some good customer service right there. Oh and the merchandise is cute too. If you join the cult-following as a big fan, you could be totally outfitted in Barry’s gear as you walk the streets. 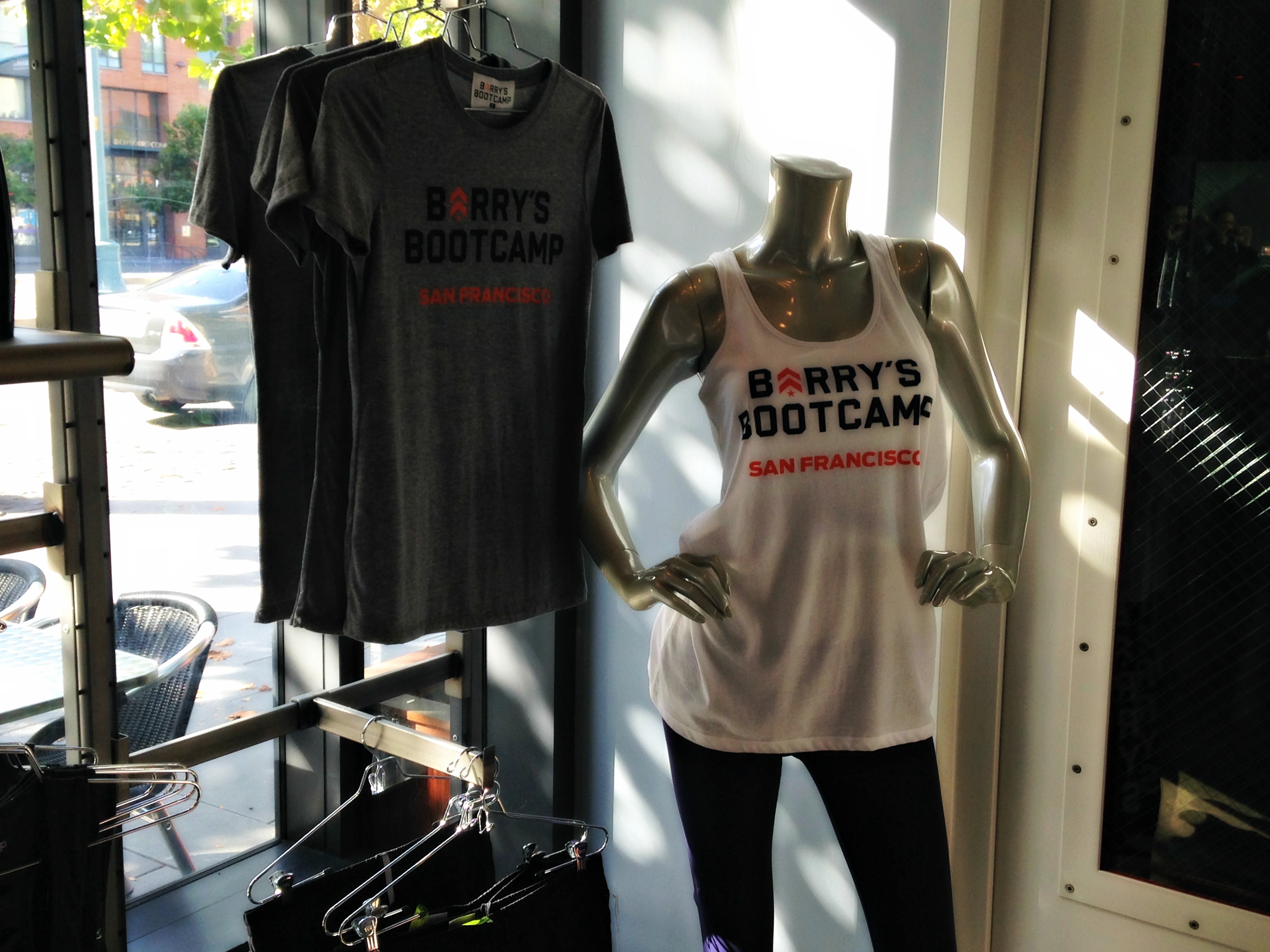 Final thoughts: Of all the new group fitness classes I’ve attended over the past few years, and especially the past few weeks using my ClassPass, Barry’s Bootcamp is by far my favorite. While it won’t replace Les Mills BODYATTACK as my true group-setting passion, it’s up there. It gives you that high that only an intense, but fun workout can. I’m definitely going back.

* Disclaimer: I attended the class at Barry’s Bootcamp for free, as part of my complimentary one-month membership to ClassPass. Learn more about the ClassPass program in San Francisco in my post about the service.

Have you ever heard of or taken a Barry’s Bootcamp class? Do you like to be motivated by an instructor or prefer to work on your own? When’s the last time you really pushed yourself in a workout?