Moxie Yoga Fitness in San Francisco’s Mission District is just what a private yoga studio should be. Small, quiet and set up perfectly for yogis.

There is a welcoming lobby and check-in area, in which you can buy merchandise and pay for classes. There is a restroom, a couple of changing rooms and cubbies for your belongings, and that’s it. It’s a no nonsense, tiny type of place.

I went to Moxie last Sunday on a day when I really needed to stretch, lengthen and relax, and I selected to try out Moxie’s most advanced class called “Moxie Elevate.” 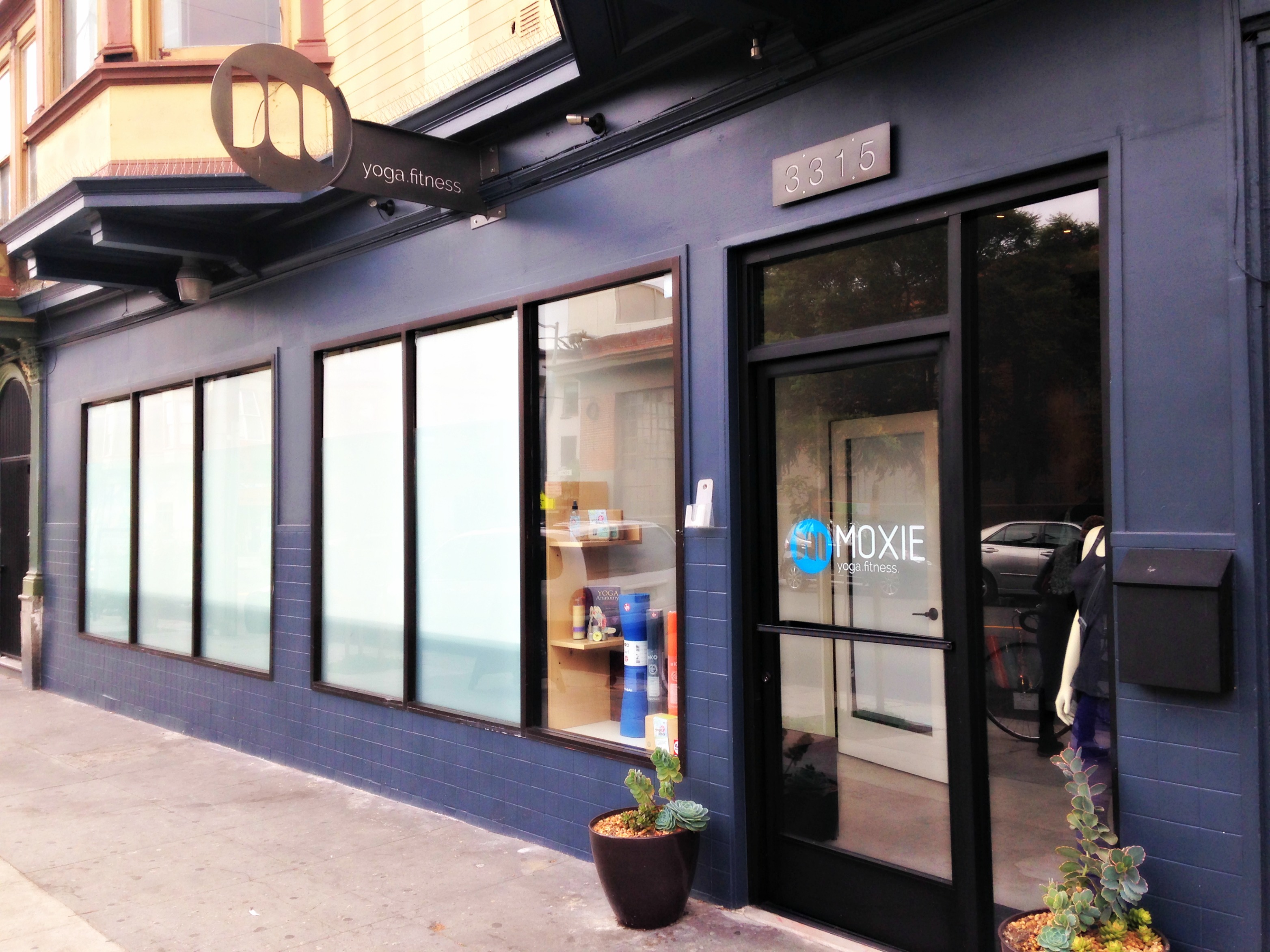 I was super happy to find parking directly in front of the small neighborhood studio. I went inside and was greeted by name. As it seems to be the case with smaller studios, the instructor, Mark, was also the person checking in participants, and because I had pre-registered and was the only name unaccounted for, he took a guess that I was Ashley. How about that? Because it was a one-person show, once all of the participants were inside, he locked the front doors and turned down the lights of the small studio space. That all happened after he gave two other new folks and me the two-second tour. 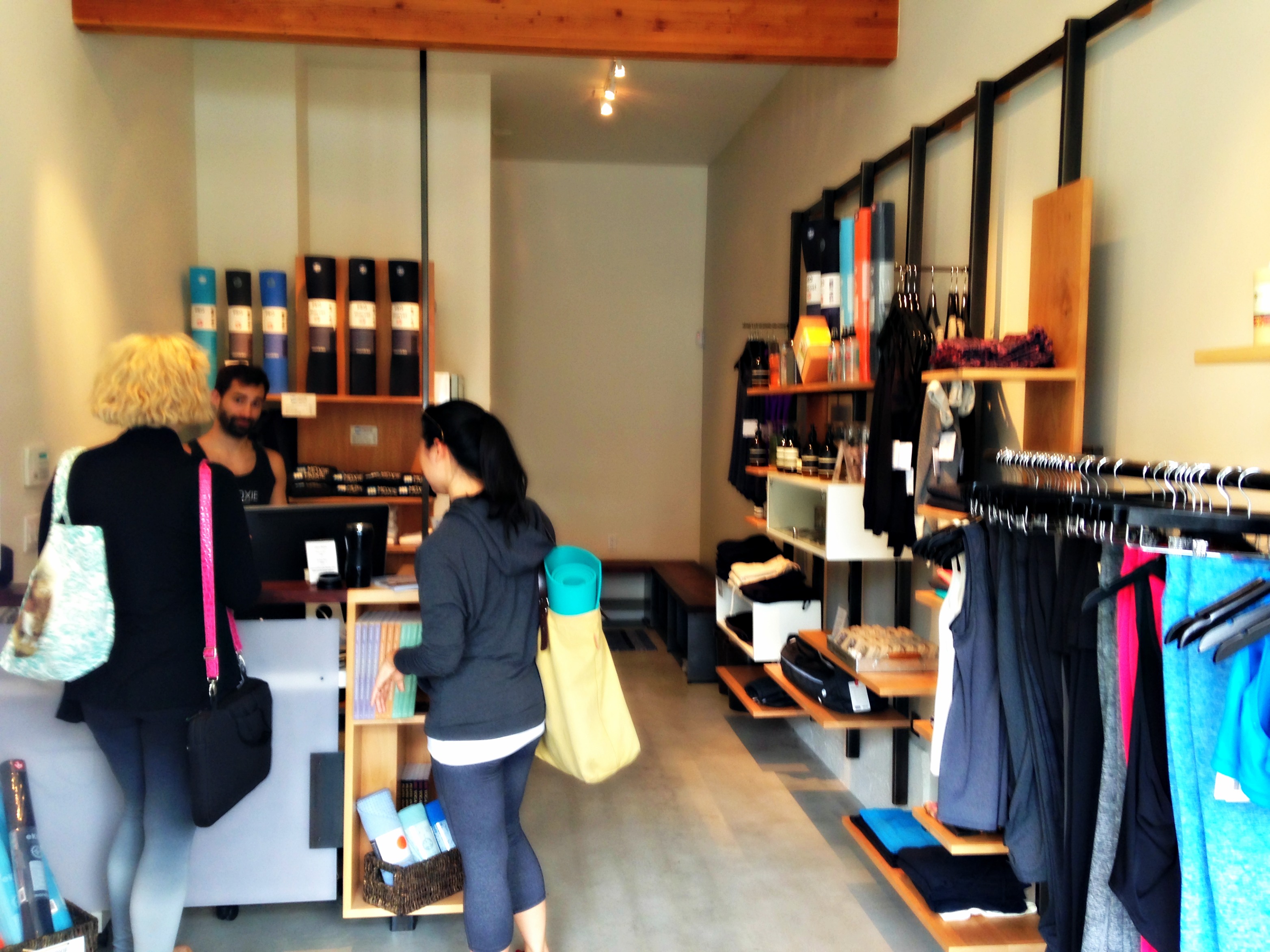 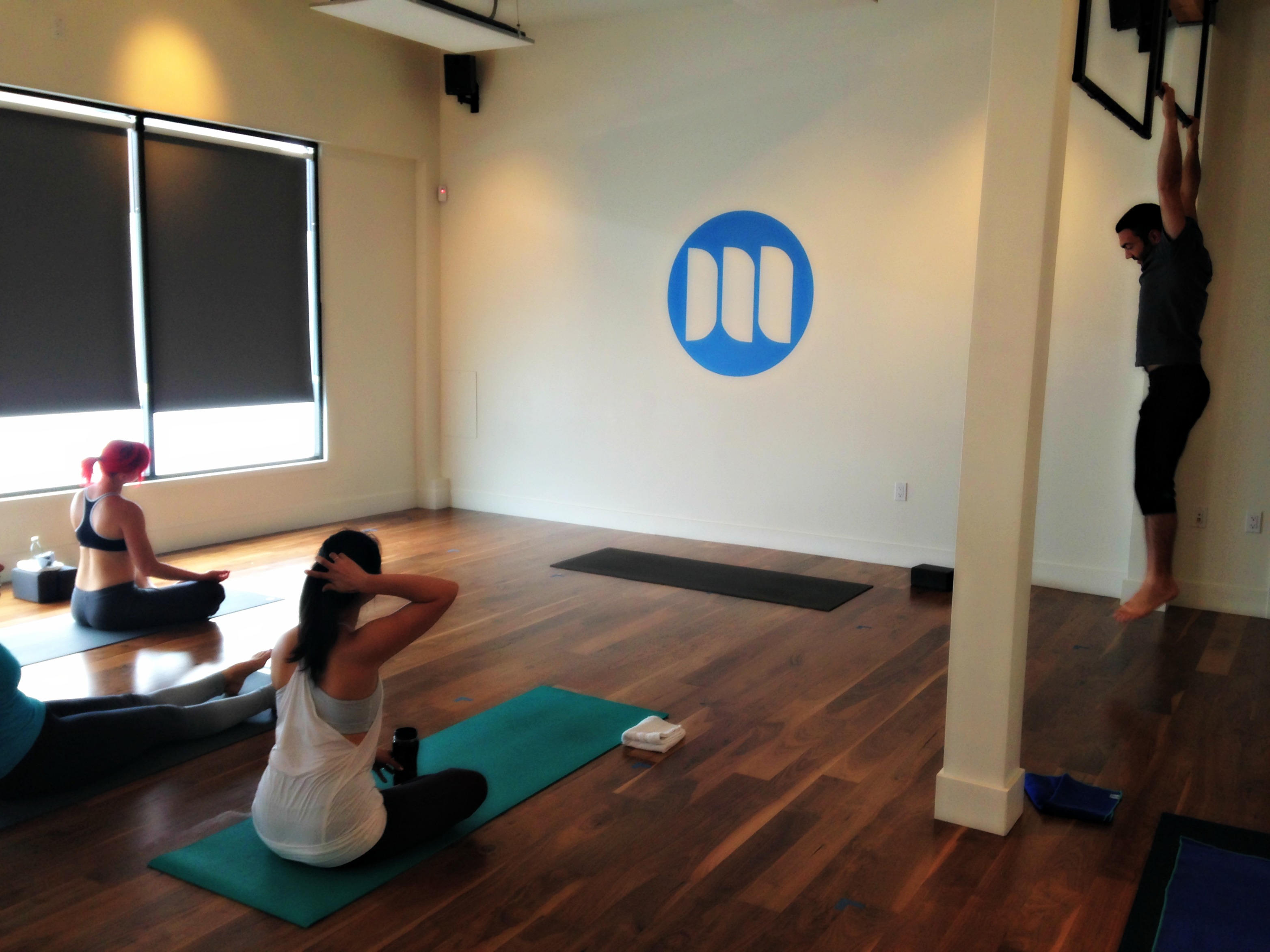 There were only five other participants in class with me, and it looked like the studio could accommodate 20, if packed in very closely. It sounded like two of the participants were regulars (in fact, one guy kept his mat at Moxie, which must be something they offer to those who buy packages, because there were individually-labeled squares for mats). But because there were new people, the instructor gave a pretty good introduction of what we should expect during the class, and he also took requests at that time. I do like it when a yoga instructor asks if anyone has any special needs. Two of us spoke up: I wanted the chance to do backbends and another woman wanted to do some hip opening moves.

Soon after that, we began.

The next hour of class went by fast. We moved through a few regular Vinyasa flowing type yoga poses, all of the Warrior poses, sun salutations, triangle poses, two different types of chair poses, some single-leg balancing and also some handstands and plenty of backbends or wheel poses, as some people call them. It was challenging. There were definitely a couple of advanced options and arm inversions that I couldn’t get into, and I broke a real sweat.

I did attempt a handstand on the wall, which is a pose I don’t normally get into on my own, but would love to master. The instructor guided me how to walk my feet up the wall to get into the right position. I held it, and I huffed and puffed. The handstand is an awesome strength-milestone goal that I even see people working through on the weight-room floor at Equinox. I’m not quite there yet, though.

Speaking of the instructor, while he did seem knowledgeable and offered personal adjustments, he was not very chipper, nor bubbly, nor super-friendly, but more of a traditional reserved yoga teacher. He got the job done though. He showed a move once in the front, then walked around and spoke. But because this was the fastest moving and most advanced class at Moxie, he didn’t show all the moves. I guess he assumed most people would know how to do them once given the name.

And by the way, even though I strive to take yoga once a week, I don’t even have my own mat, so I rented one at the studio for $2, which is more than some of the other studios offering a mat for $1. And the mat smelled a little funny, sort of like a rancid cleaning spray. But all rented mats tend to have a little bit of a tinge. I guess I just need to buy my own to avoid that.

The tunes at Moxie Yoga

Moxie is known for its music and curated playlists used as a backdrop to class. In fact, the instructor’s playlist of the day was displayed at the front desk for all to see, which I think is a good touch. 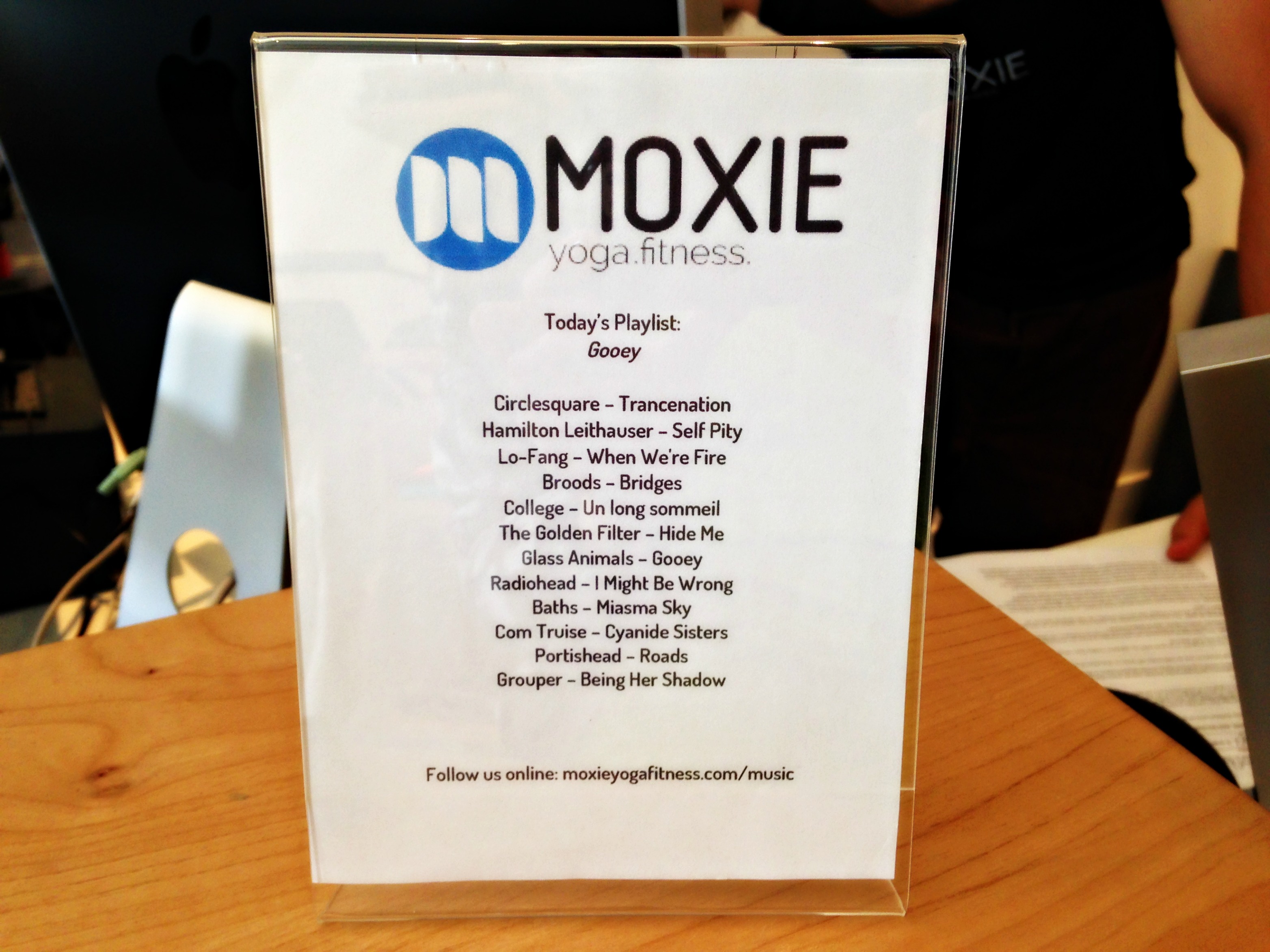 It was sort of light rock-ish music and most songs I hadn’t heard before, but it didn’t really make or break the class experience for me. Truthfully, I was hoping for some livelier tunes, but I like the thought behind previewing the music.

My experience at Moxie was above average. Overall, it was a strong yoga class and certainly not for beginners. We did all the moves I would hope to do in yoga, and I felt really good after-the-fact. The studio was clean, small and efficient. No fuss, no frills. While the experience wasn’t stand-out as far as fun, it was just what it should be. And sometimes, that’s exactly what you need from yoga. Also, there was a little bit of Pilates thrown in at the end for ab-work, which was different. 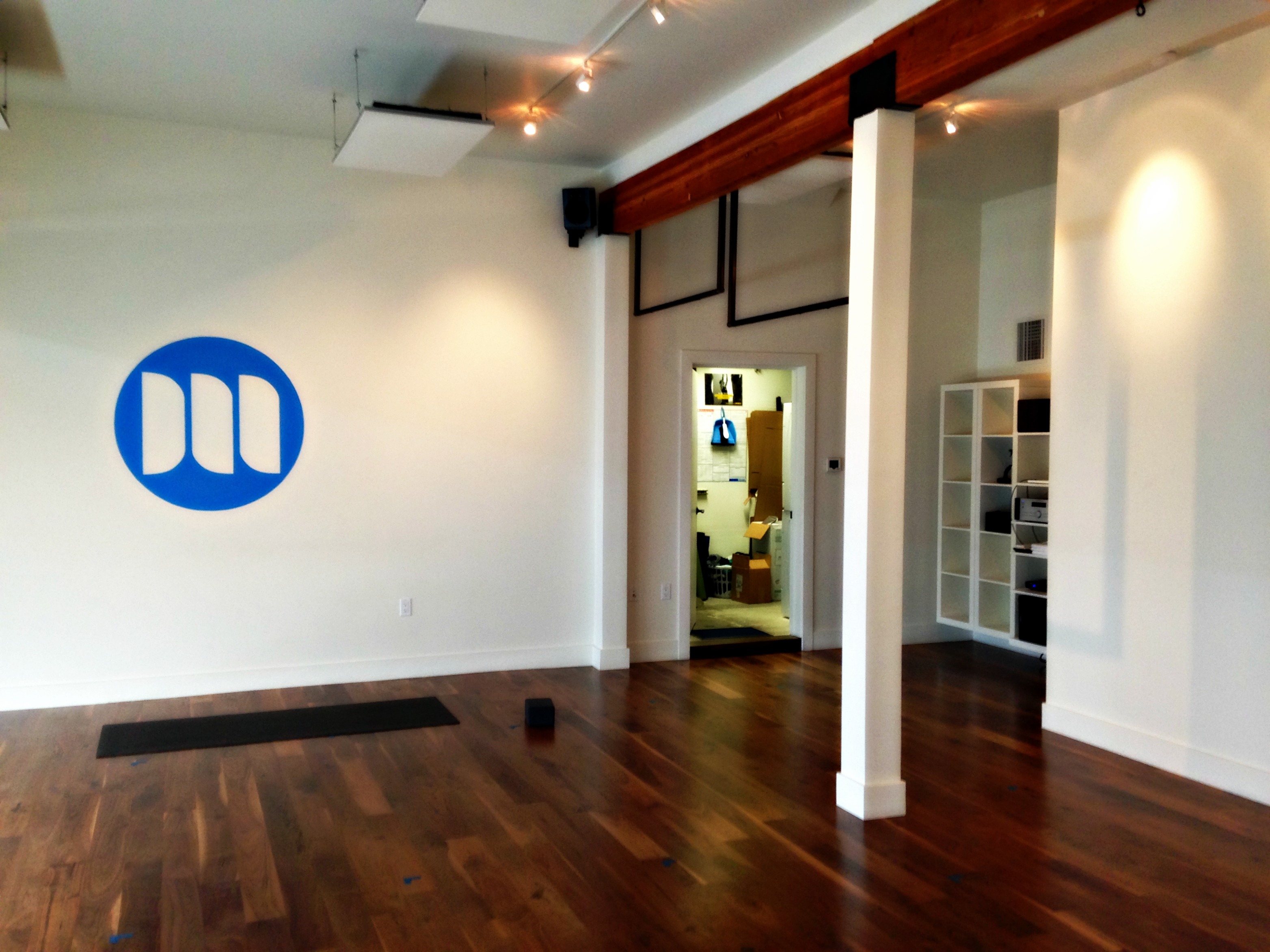 If I haven’t said it enough over the past few weeks of reviewing San Francisco classes via my complimentary ClassPass membership (which is sadly coming to an end this week), I love checking out private studios and all of their unique intricacies. I spend my days working in corporate gyms, and I’m definitely enjoying the touch of a small, intimate class setting, in which you leave your bag in a cubby and soak in the workout of the day along with just a few others.

* Disclaimer: I attended the class at Moxie Yoga for free, as part of my complimentary one-month membership to ClassPass. Learn more about the ClassPass program in San Francisco in my post about the service.

Do you like yoga? How often do you practice? How was your long weekend?