Burn, baby, burn. That’s basically what I came away with after trying Pure Barre in the West Portal neighborhood of San Francisco. Here’s my class review of Pure Barre.

I walked into Pure Barre as a barre-class novice, but not a first-timer. A few years ago, I took one official barre class at The Bar Method in Orlando, Florida, so I had a small idea of what to expect. I knew that because barre involves moves entirely different than what I do in my own workouts and classes, I was in for a challenge.

Designed to give participants a long and lean dancer’s body, barre classes are quite popular these days among women, so it was about time I got more accustomed to the craft.

Here’s how it all went down …

Pure Barre West Portal is the second Pure Barre in San Francisco, located a few minutes outside the city core in a residential neighborhood. The studio itself is in a shopping center, which is close to a major public transportation stop and has plenty of parking. 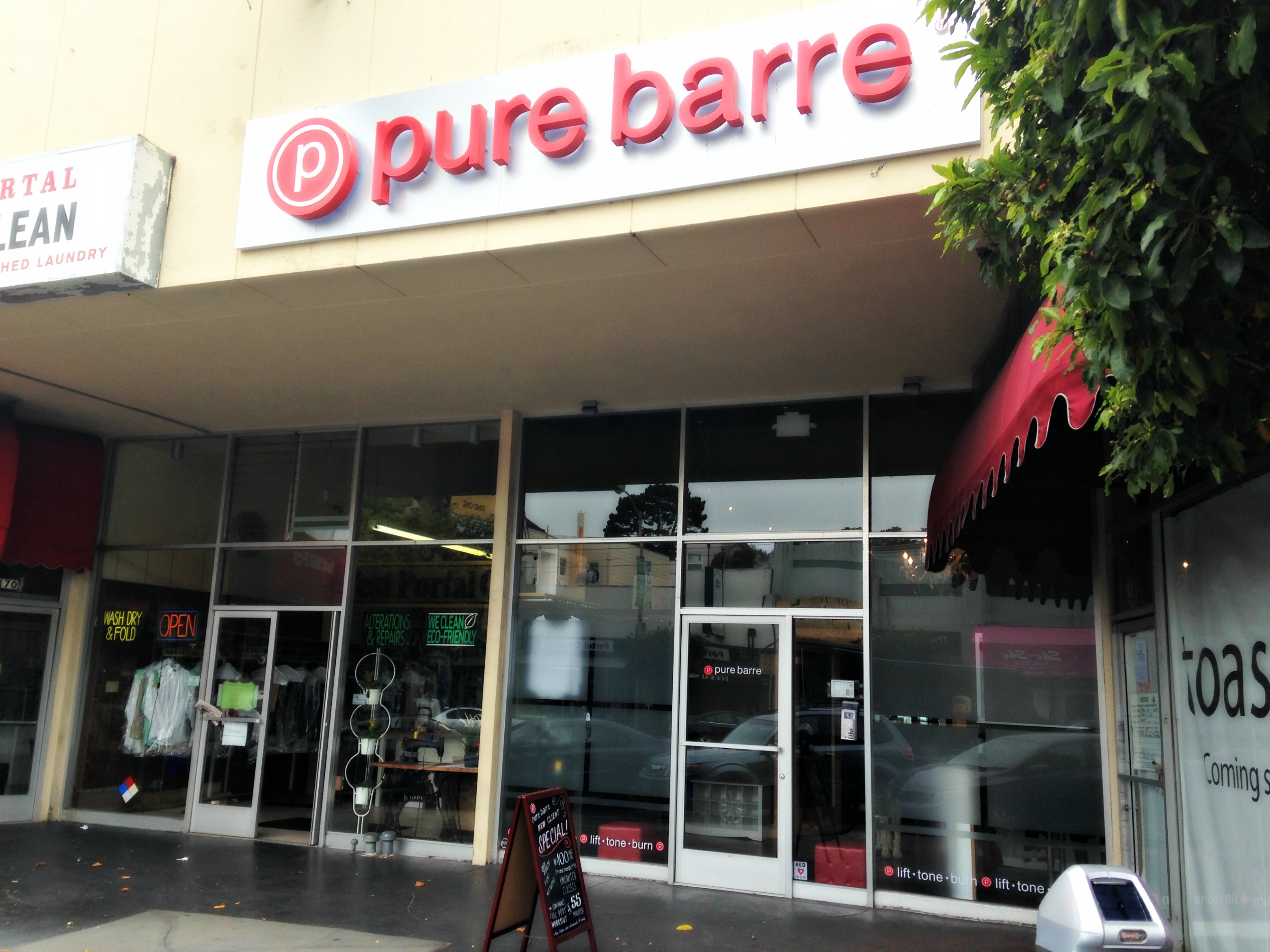 Pure Barre is a franchise, so the equipment and space are top notch, obviously following the brand guidelines for the company. As you enter, the lobby and check-in area has a small retail section to buy barre-wear, which is well designed and laid out. 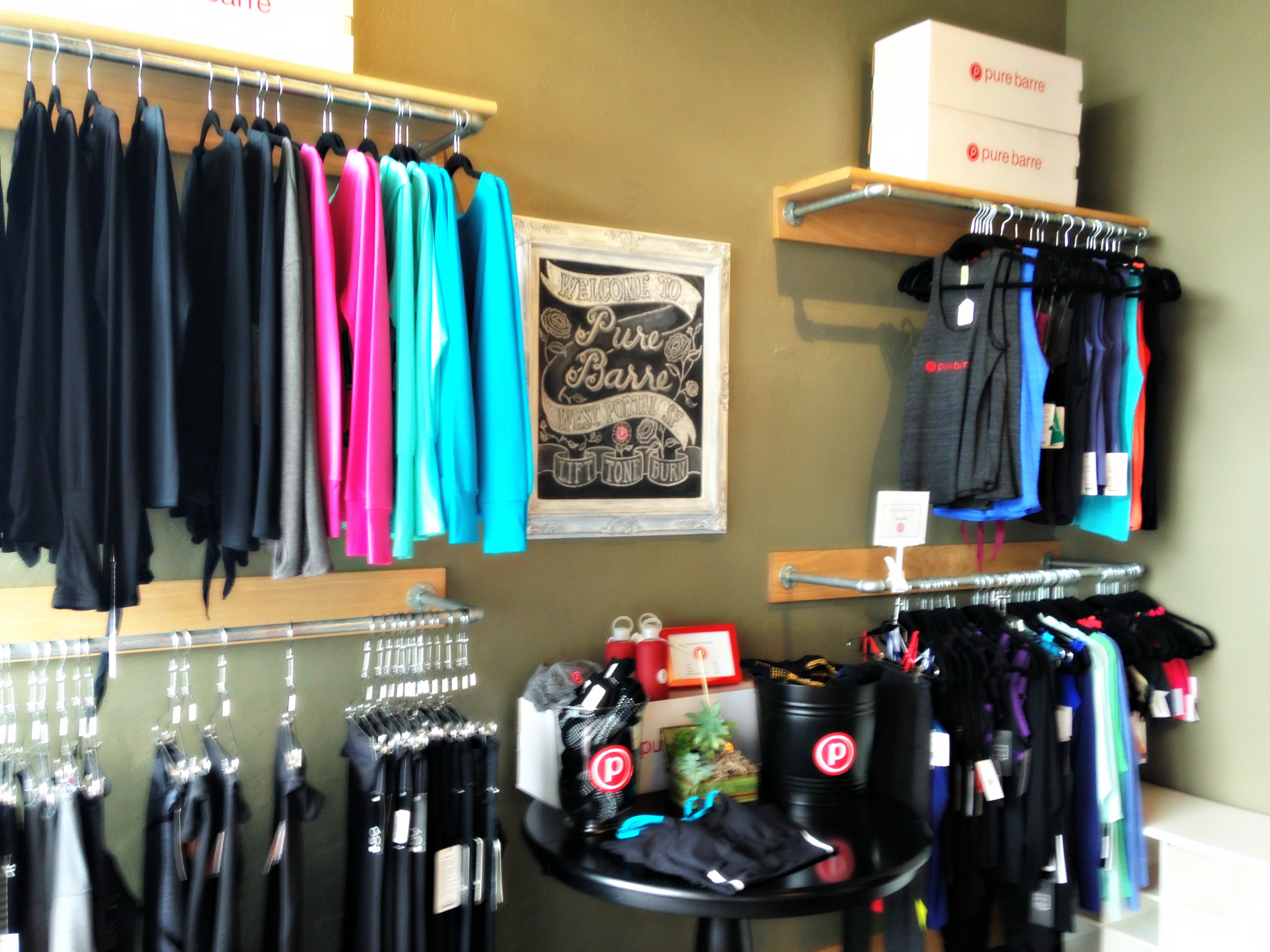 And just passed the lobby, the studio space itself is small, but clean and welcoming. 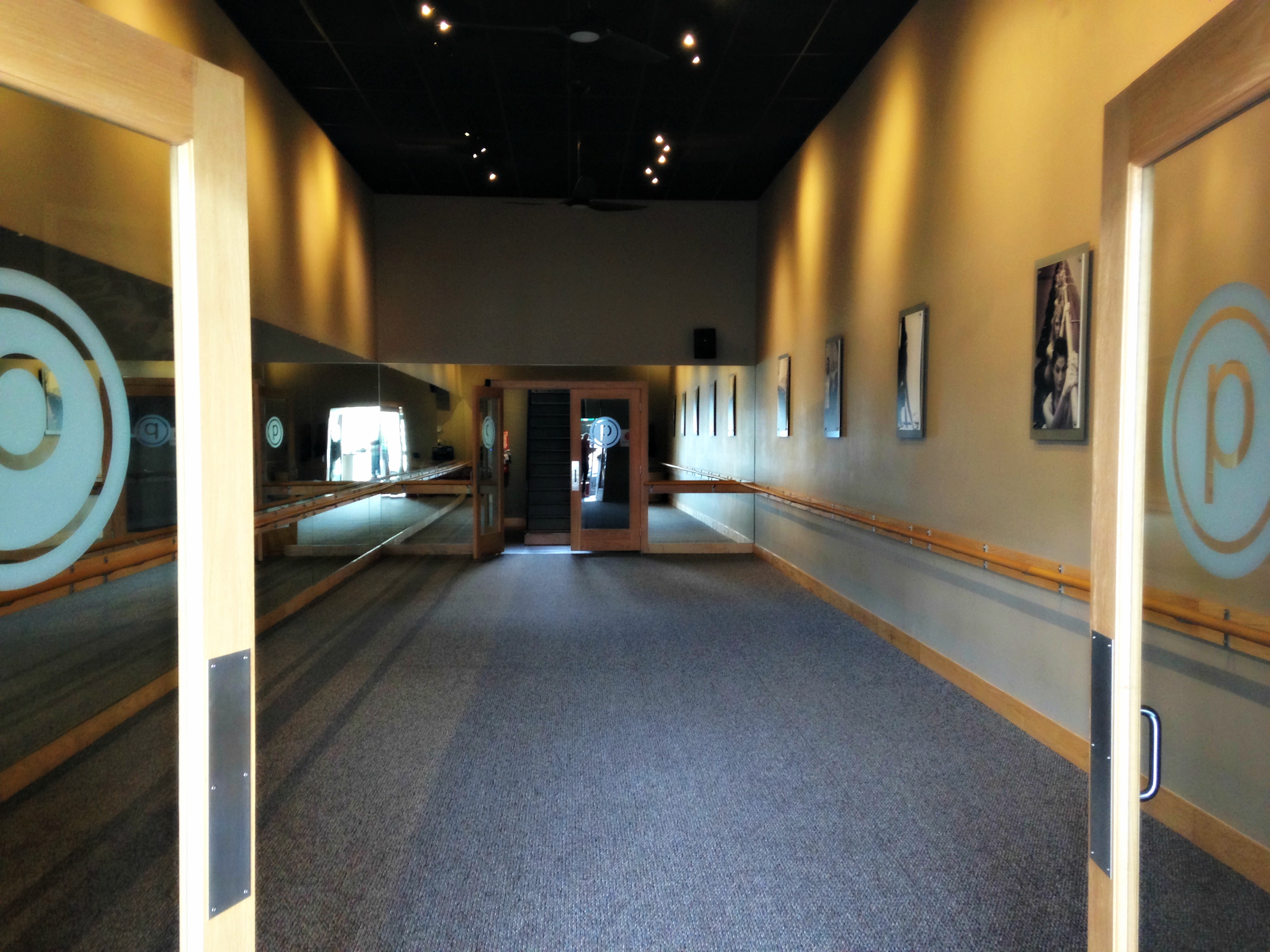 I went to the class on a lunch-break with my personal training budding from work, Lauren, shown below. Lauren and I have been working out together lately, and on that particular day, we felt like we needed to get out of the gym for a minute. I’m so glad we did. 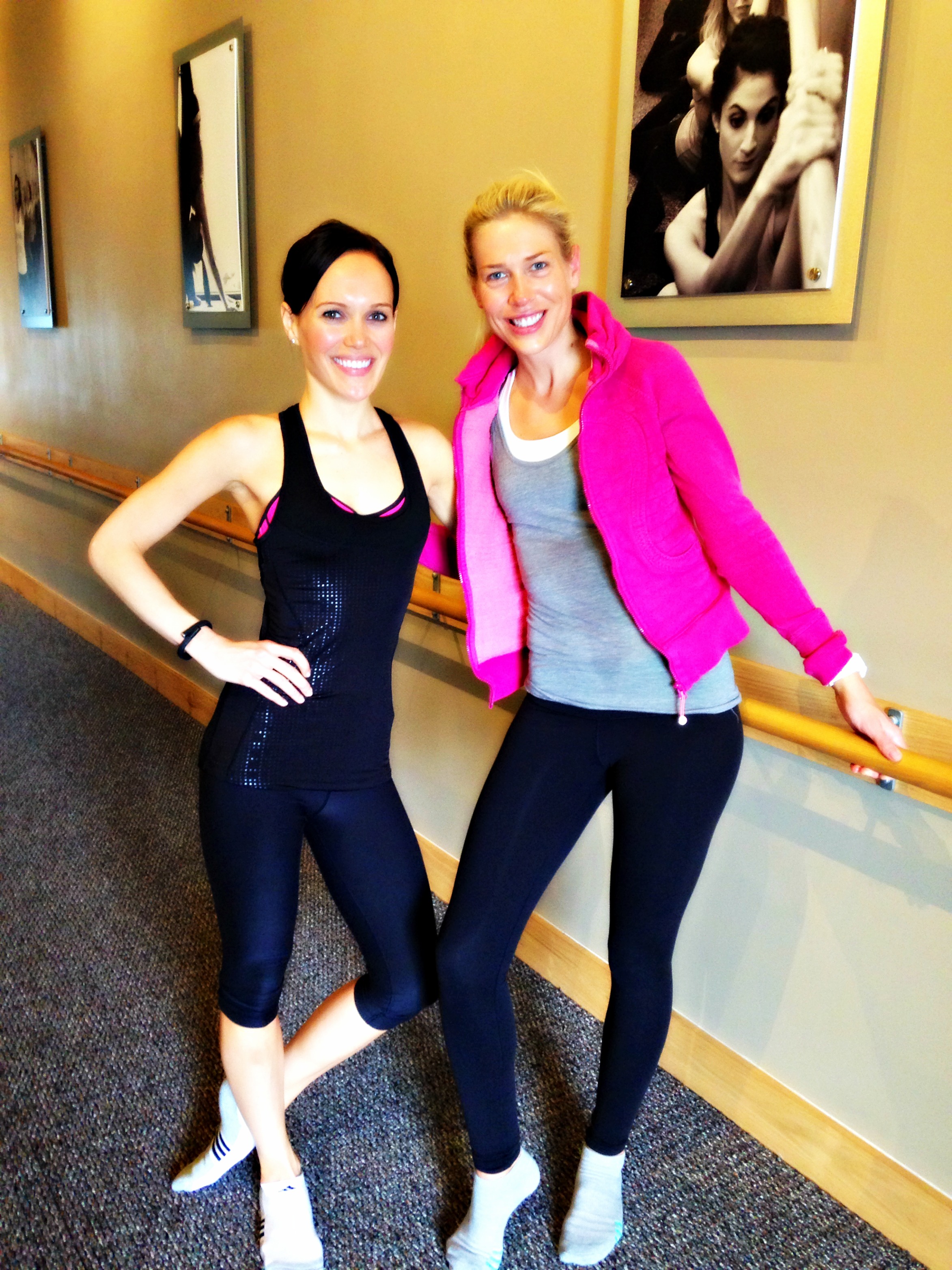 And by the way, Lauren used to teach Pure Barre classes in San Francisco, so she was a pro.

Because we arrived about 15 minutes before class, Lauren and I were able to talk to the instructor of the day, who owns the franchised studio. Her name was also Lauren, and she was lovely. She told us she opened the studio six months ago, and she lives very close to the gym where we work. She had her dog there with her, and after welcoming and registering attendees, she locked the front door and taught the class. This personal experience is just another thing I’ve noticed while checking out private studios in San Francisco: Oftentimes it’s a one- or two-woman operation, much unlike the large corporate-gym experience I work in every day.

As any good instructor would, Lauren (the instructor) came up to me before class to explain some terms commonly used in a barre class. “Tucking” involves pulling your butt under you and pushing your pelvis forward. The “tuck and hold, tuck and freeze” is a common coaching cue used to instruct rhythm and tempo. And sets of work are referred to as “changes,” and she would let us know how many changes we had left. Perhaps my favorite piece of terminology of the day was that the rear-end is always referred to as your “seat.” Never anything else. How classy.

As a group fitness instructor, I’m very picky about the sound system and microphone set-up in a studio. Pure Barre West Portal had an incredible system (based off an iPod believe it or not), with a well-chosen line-up of popular music, complementary to the moves at hand. And the instructor did something I’ve never seen before, in which she held onto a remote-control the entire class, and adjusted the volume of the music up-and-down as we moved from set-to-set, so she didn’t have to speak too loudly over the modern upbeat tunes. I loved that.

The class was full of women who seemed to know what they were doing (no men, although they are welcome), and began with knee raises marching in place, it moved on to plies and squats while holding onto the barre. Then we used very small two-pound weights for an upper-body arm circuit that truly had my arms burning. I felt like we were holding our arms up and pulsing for five minutes. You wouldn’t think it is possible to challenge your arms with weights so small, but ohhhh it is.

In a barre class, you burn out and fatigue each muscle group and stretch that area before moving on. The moves include mostly small isometric holds and contractions. In fact, you could sneak your way through class without truly getting a great workout if you wanted, because a lot of the tucking and pulsing is based on your own fitness level and ability to understand what the instructor is asking of you. That means, the better your form gets, the harder you actually work.

In a Pure Barre class, the instructor demos the move one or two times, then walks around and corrects participants’ form — something I really appreciated. There were a couple of times Lauren helped me get back into a proper tuck, which is a position that is totally foreign to me in my own workouts.

During class, you will take advantage of some expertly branded equipment … 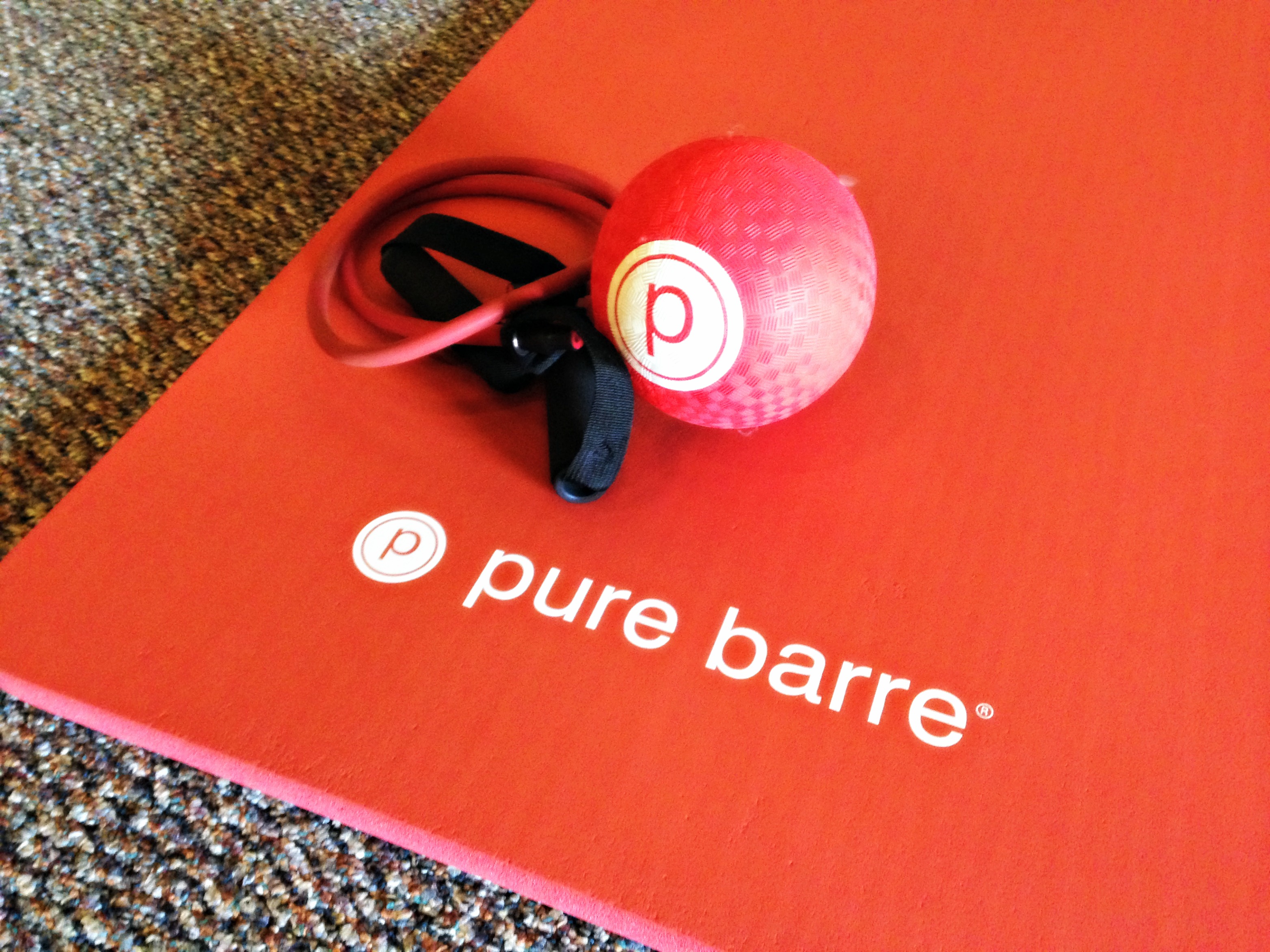 We did some leg work on the floor while holding that little ball tightly between our thighs, and we did some core work in the middle of the floor on the mat. And the resistance tube was used for stretching between changes.

Overall, I enjoyed the workout. It’s low impact, so anybody can do it. It went by very fast, and definitely provided moments of real challenge and burn. But it wasn’t a killer. Even though it’s ballet-inspired, there aren’t any big dance moves at all. There is actually no dancing, so no need to be intimated by that factor. Almost all of the work is done in one stationary spot, which makes it more welcoming for all levels. And it leaves you feeling strong and long, not defeated — another major benefit.

I expected my thighs, legs and butt to be super sore after Pure Barre, because we spent so much time working them, but they weren’t. However, my triceps were a little bit achey.

I think barre classes are a great addition to a fitness routine, however they definitely need to be complemented with some additional cardio and heavier weight training throughout the week. You shouldn’t rely solely on a barre workout. Even though I felt the burn, I still could have done a little more working out after the class was complete. I got a little heated throughout, but didn’t break a big sweat. My body felt like it could’ve done more.

Would I go again? Definitely, I can see how the barre workout helps people achieve that long and lean dancer’s body. And well, quite frankly, I like the fact that it burns.

* Disclaimer: I attended the class at Pure Barre for free, as part of my complimentary one-month membership to ClassPass. Learn more about the ClassPass program in San Francisco in my post about the service.

If you’ve enjoyed this class review of Pure Barre, feel free to check out my other reviews here.

Have you ever taken a barre class? If so, are you a fan?