Sometimes I like to go on a food tour and do it up right.

In addition to taking our Florida visitors, Jess and Amanda, to Fort Mason Park, I was adamant that we take them on a food tour of a San Francisco neighborhood to really experience the cool factor of this city.

Luckily, we were able to score some tickets to Chris Milano’s Foodie Adventures walking culinary tour of the Mission District. Chris is a sixth-generation San Franciscan and a pretty big deal in the food world. In fact, he’s been on the Food Network and countless national outlets as a chef and food resource. If there was a tour guide you’d want to teach you about local food, it would be him.

This wasn’t my first food tour in the City. Dave and I went on a food tour of the North Beach “Little Italy” neighborhood with Local Tastes of the City a few months after moving to San Francisco and had a grand time. So we walked into this experience with high expectations. Especially since we were bringing along some out-of-towners, who weren’t quite sure what they were in for.

We met Chris and a group of about 15 other people in front of a restaurant at 10:30 a.m. on a Saturday morning. Chris introduced himself and his background and then off we went on foot. Suffice to say, we ate a lot, and we walked a lot. I was wearing my Jawbone UP24 band and tracked that we covered just under two miles, strolling from place-to-place.

Our tour covered the Mission District. The Mission is one of San Francisco’s hybrid neighborhoods, which is home to an eclectic mix of hipsters, Latino roots and new-age tech money, including one of the pads of some skinny guy named Mark Zuckerberg.

It’s an area known for it’s delicious Latin food. And although Dave and I have gone to a couple restaurants in the area, as well as Mission Delores Park, we had never truly gotten the Mission experience, so we were excited to be doing it with a pro.

What happens on a food tour?

On the tour, we made seven stops, in which we had food and drink and even took in some local art.

Chris had selected the eateries ahead of time, and our prepaid $83 per-person ticket price covered all of the food at each stop. At some places we were given a choice, but mostly the menu was set and we ate what was offered. Clearly, Chris had a great relationship with the owners of each place, and they each took a minute to talk to us about their food and history.

These were not chain restaurants. They were local spots, some of which looked a little questionable on the outside. There’s no way Dave and I would have ventured out to these places on our own, because we wouldn’t have had any idea what to order.

First up was King’s Bakery, where we had coconut buns, brownies and french bread. The coconut buns were to-die-for, and are one of the items on San Francisco’s infamous 100 The Big Eat list by 7X7 magazine, which details the best bites in the City. 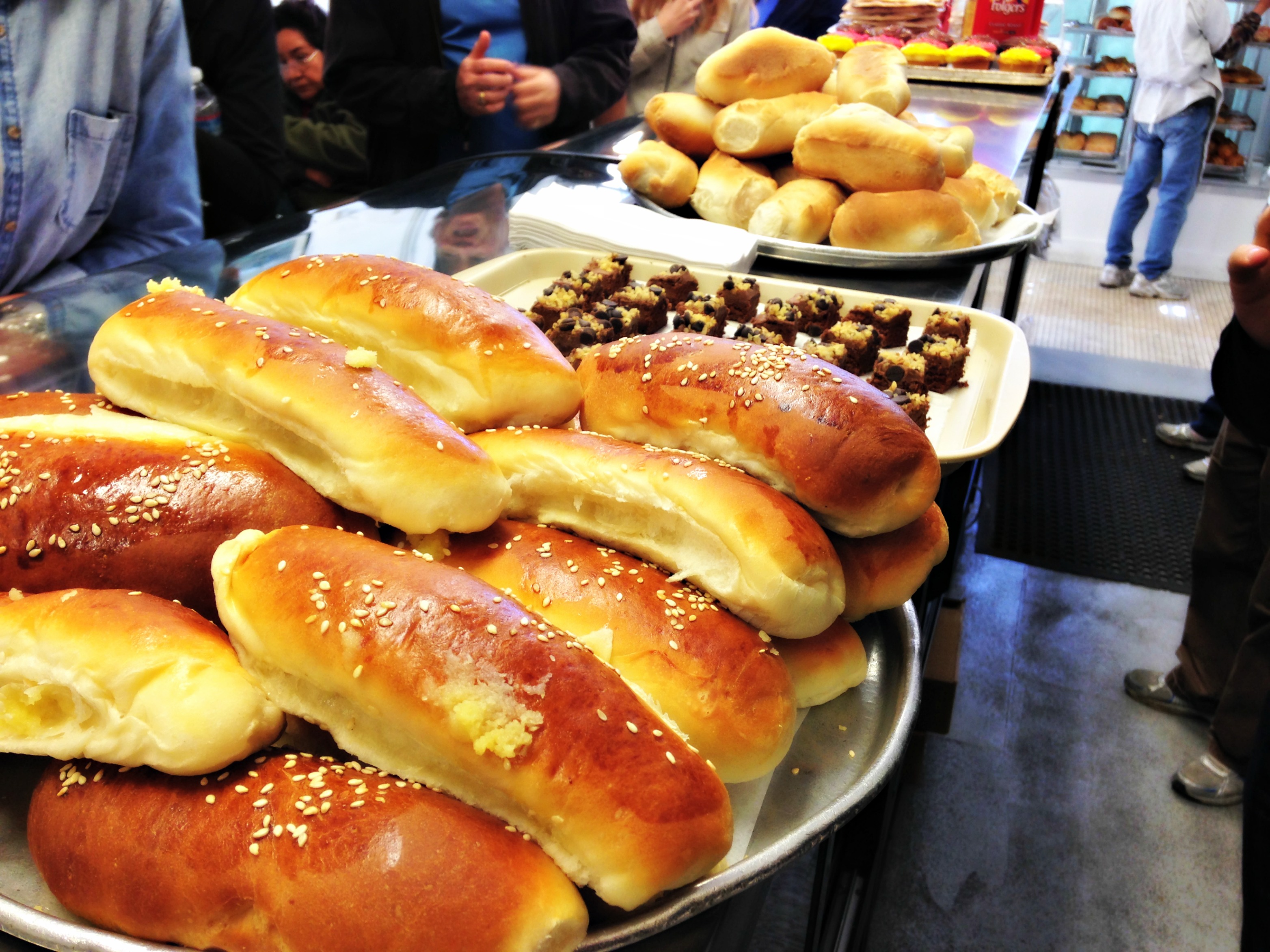 We were encouraged to take photos, so our group (from left to right: Jess, Amanda, Melissa, me and Dave) posed with the bakery owner. 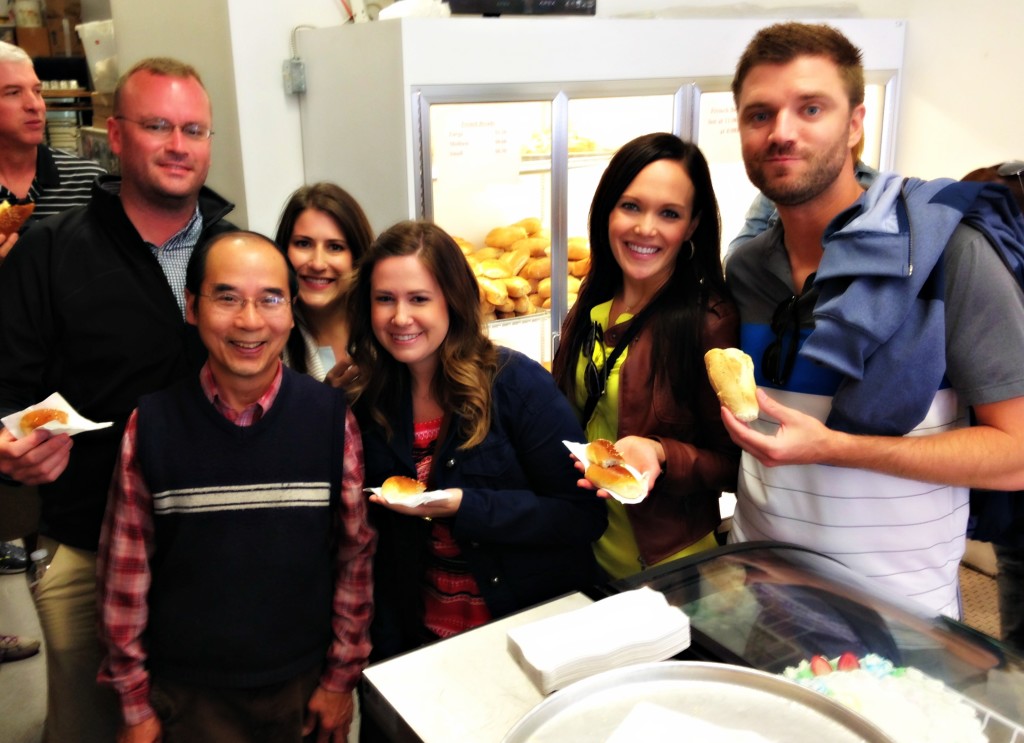 Next up, we visited Tortas Los Picudos for some strange torta Mexican sandwiches and a vegetable and fruit smoothie, which tasted like a virgin Bloody Mary. It was the perfect complement to the spicy food. 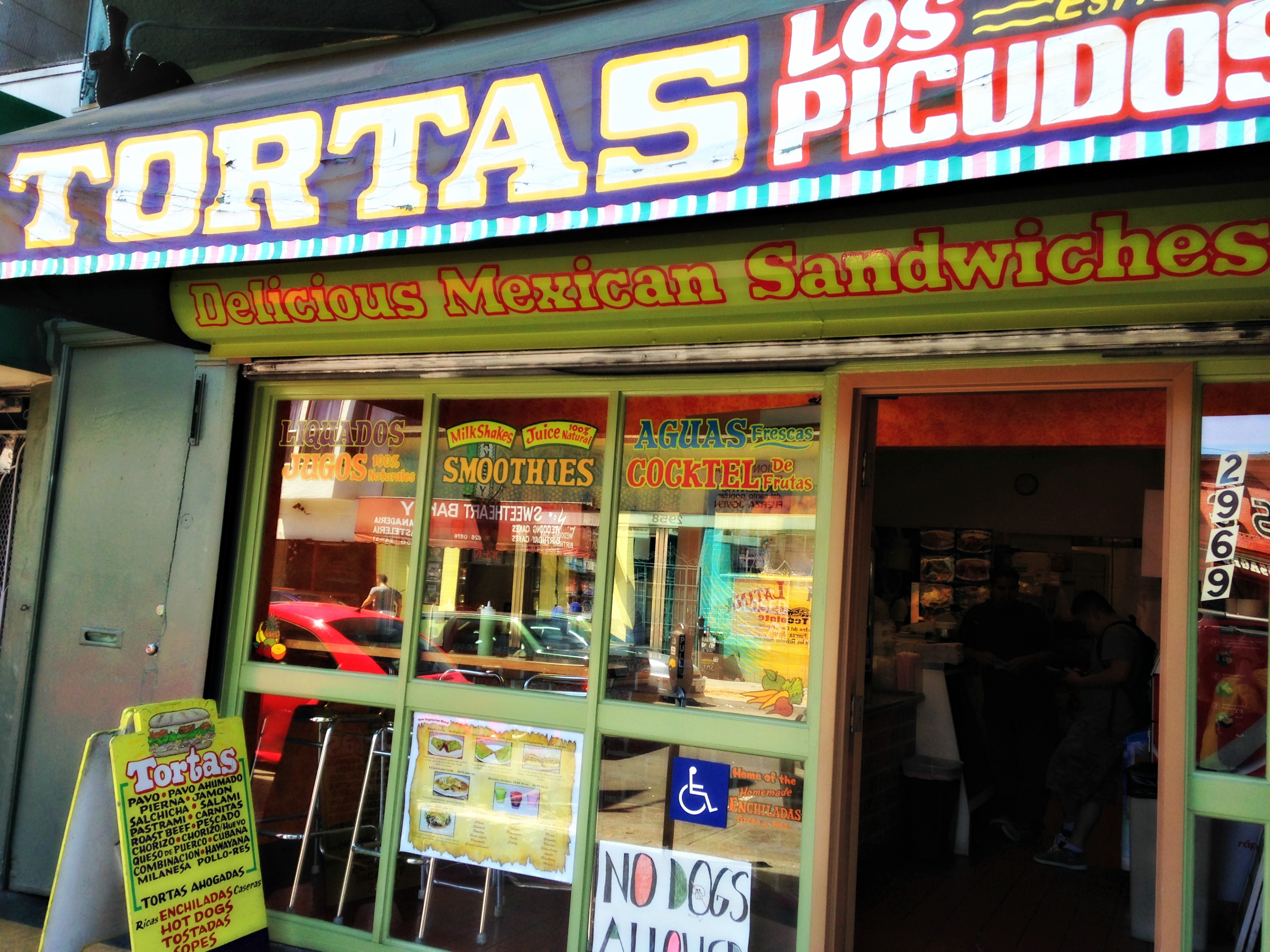 Here is Chris, our tour guide, passing out the drinks. We were told there were nearly a dozen fruits and veggies in this beverage and to make it at home would be very expensive. 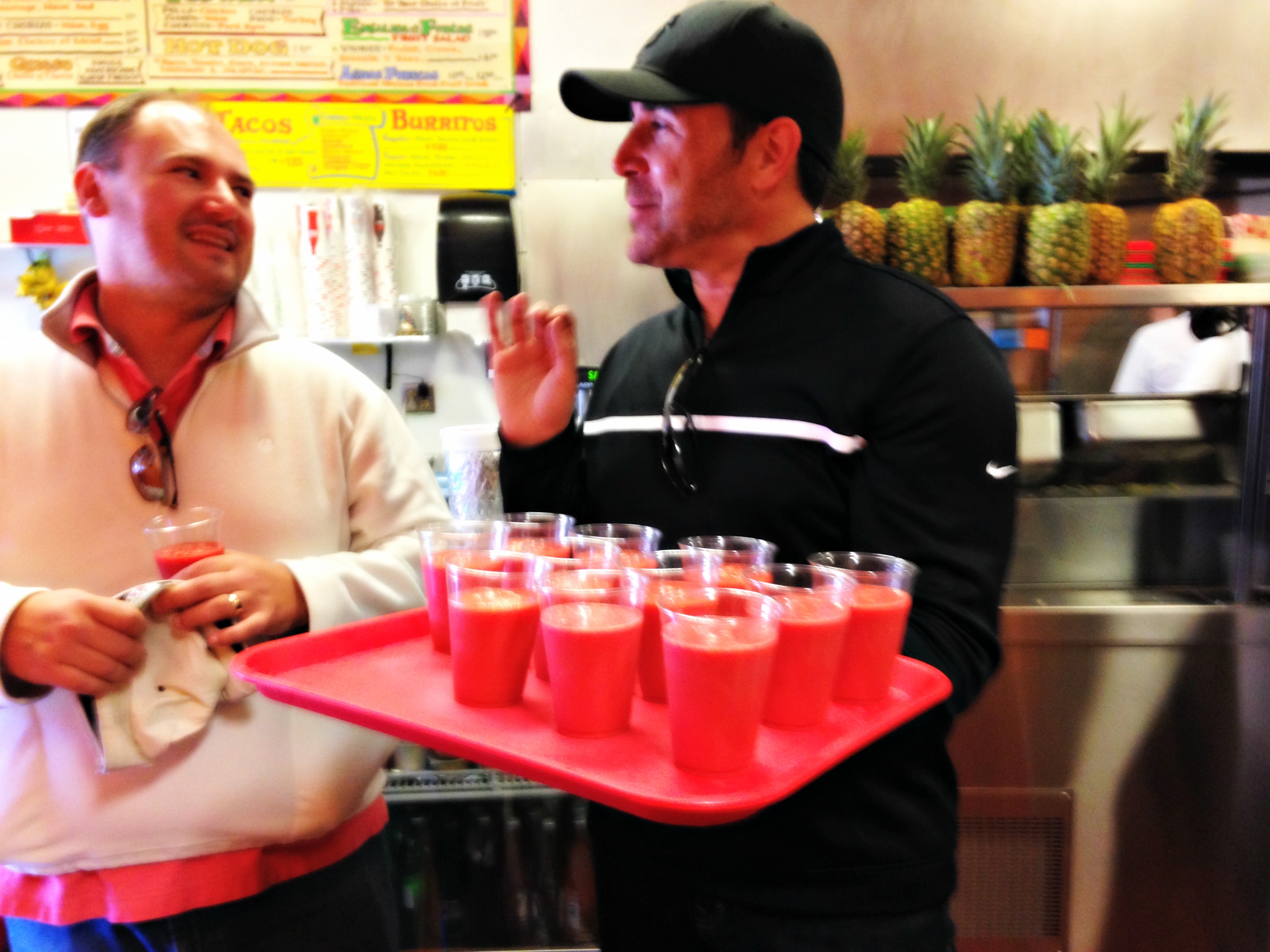 And here is Dave enjoying his torta. I found the torta a little too wet, as it was doused it sauce, but overall it had a good flavor to it. 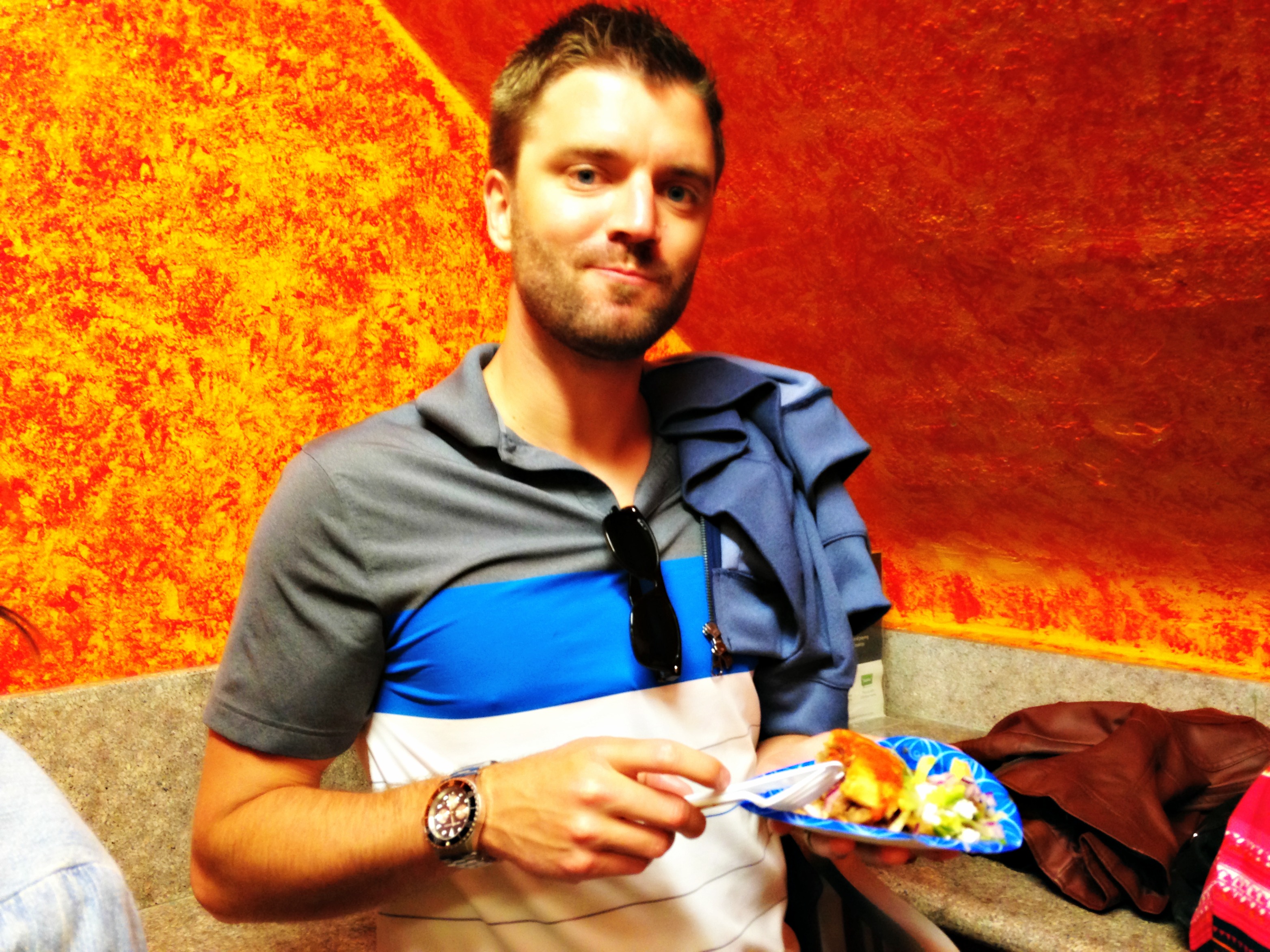 From there we went to Belmar La Gallinitas Meat Market, in which we got a history of a particular cut of meat directly from the butcher who discovered it. 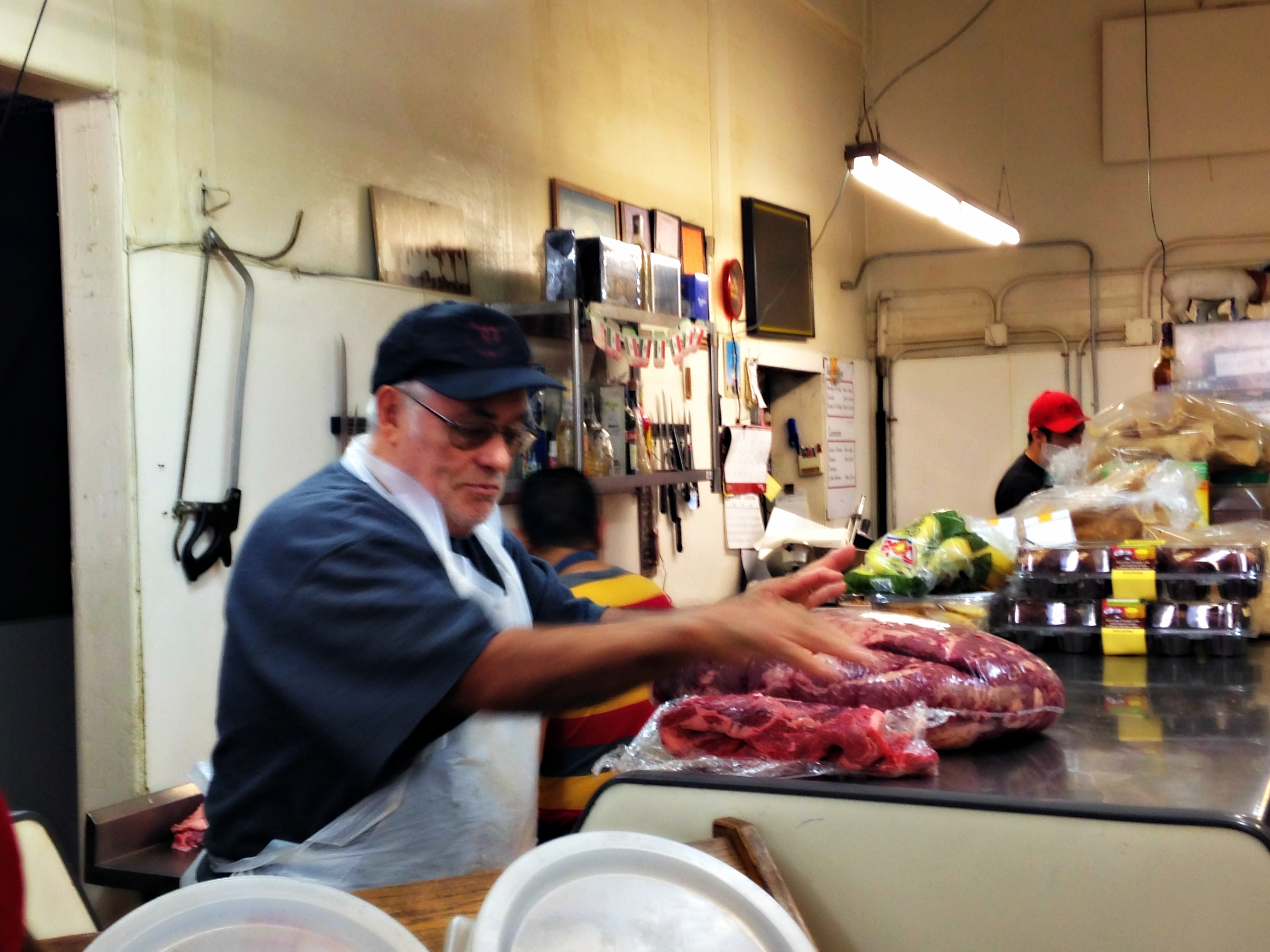 After the history lesson, we all waited in line to retrieve our chorizo and carne asada tacos. I wasn’t a fan of the chorizo, but loved the carne asada, shown below on the right. 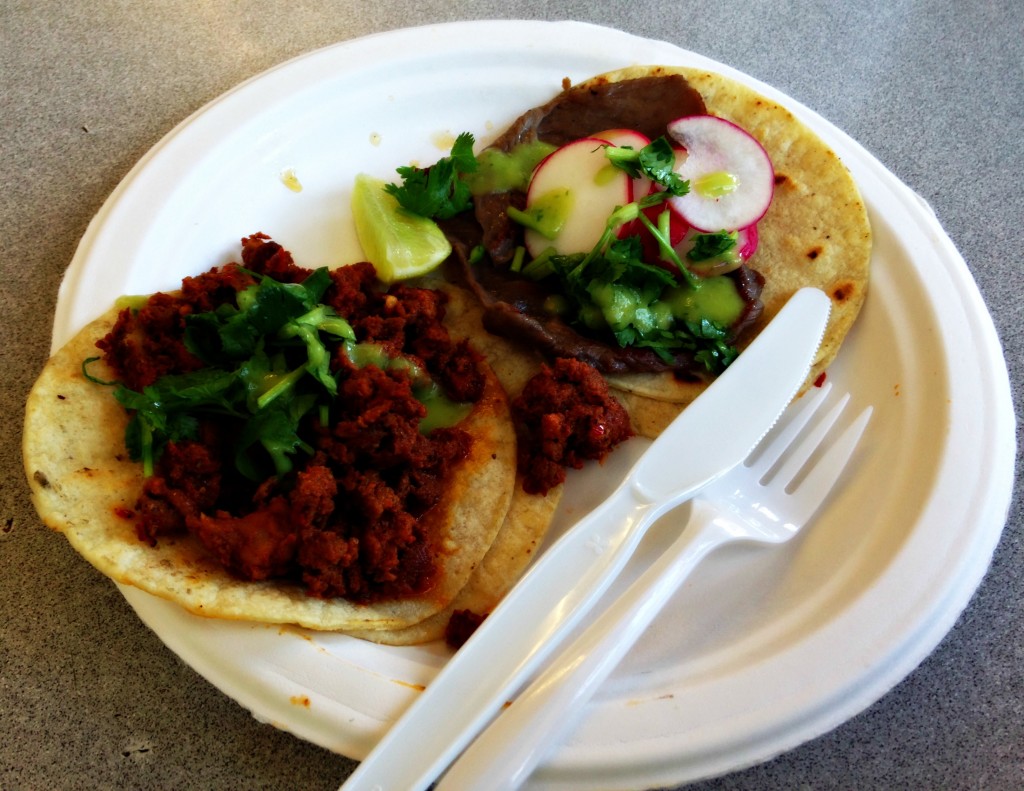 These were some of the freshest tortilla wraps I’ve ever tasted. It was clear everything we were eating was made-by-hand that day, which is a big change from the wraps Dave and I buy for our weekly Sunday night taco night.

By that point, after three stops, we were all getting a little full, so it was the opportune time for a food intermission. Then, Chris took our group on a scenic stroll down a street called Balmy Alley, where several gorgeous colorful murals were painted on garages and walls. I didn’t even know this street existed and am so glad to have experienced it.

The following mural was one of my favorites, as it depicted the social issues in present-day San Francisco, like housing, gentrification and the loss of the middle class. 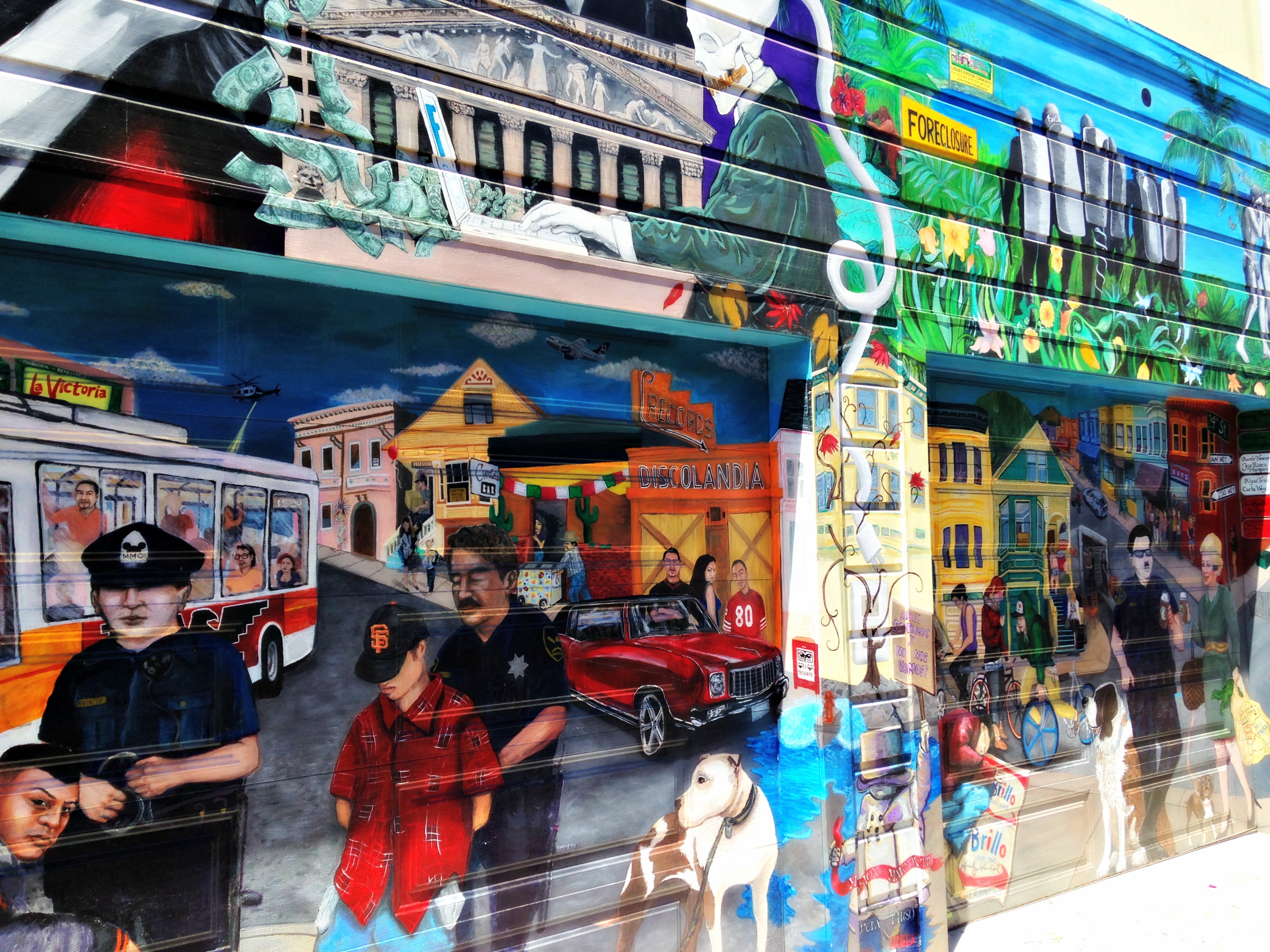 And this one was a little bit more religious and full of pretty colors. 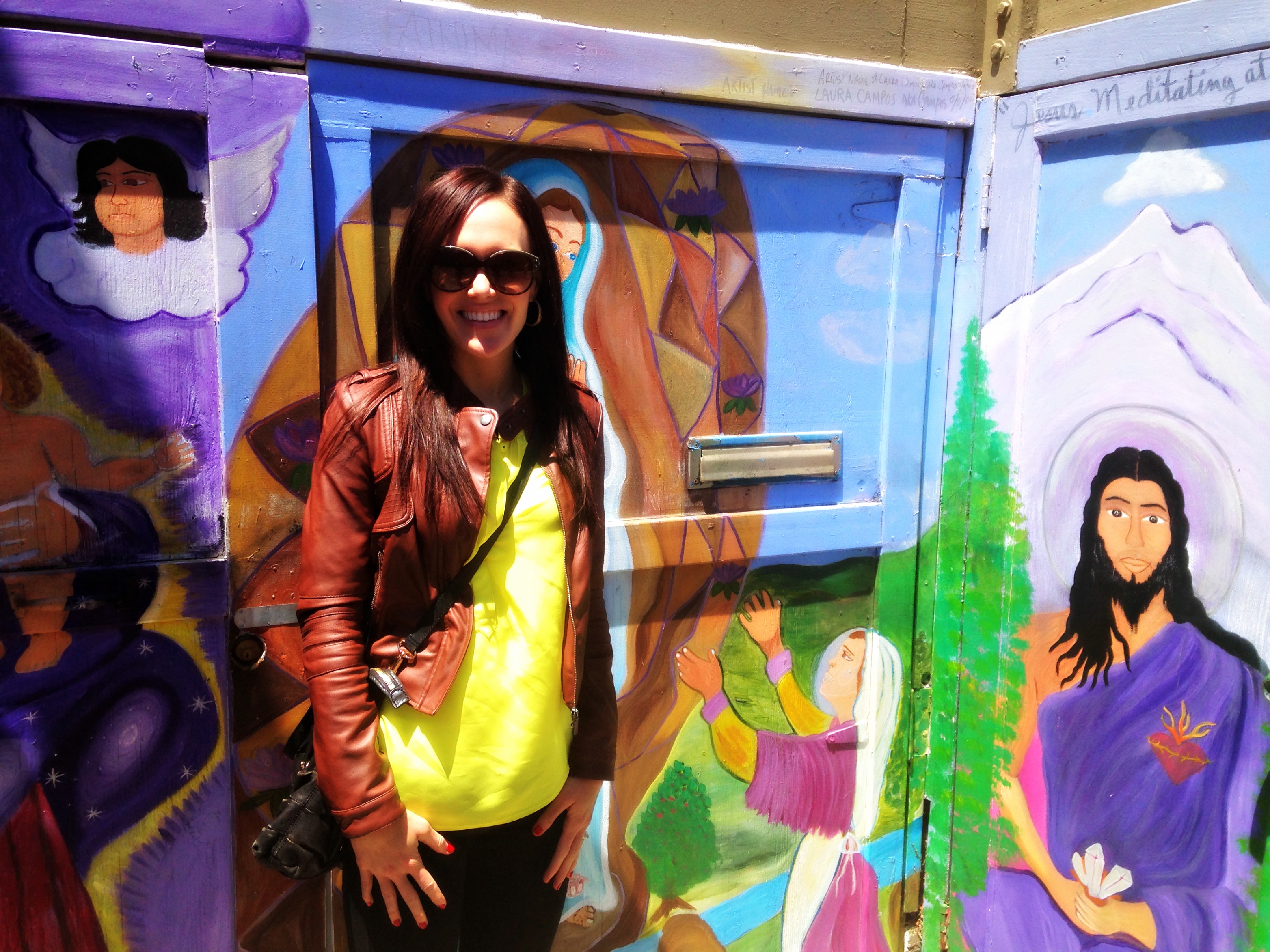 Of course, we had to get a group shot. 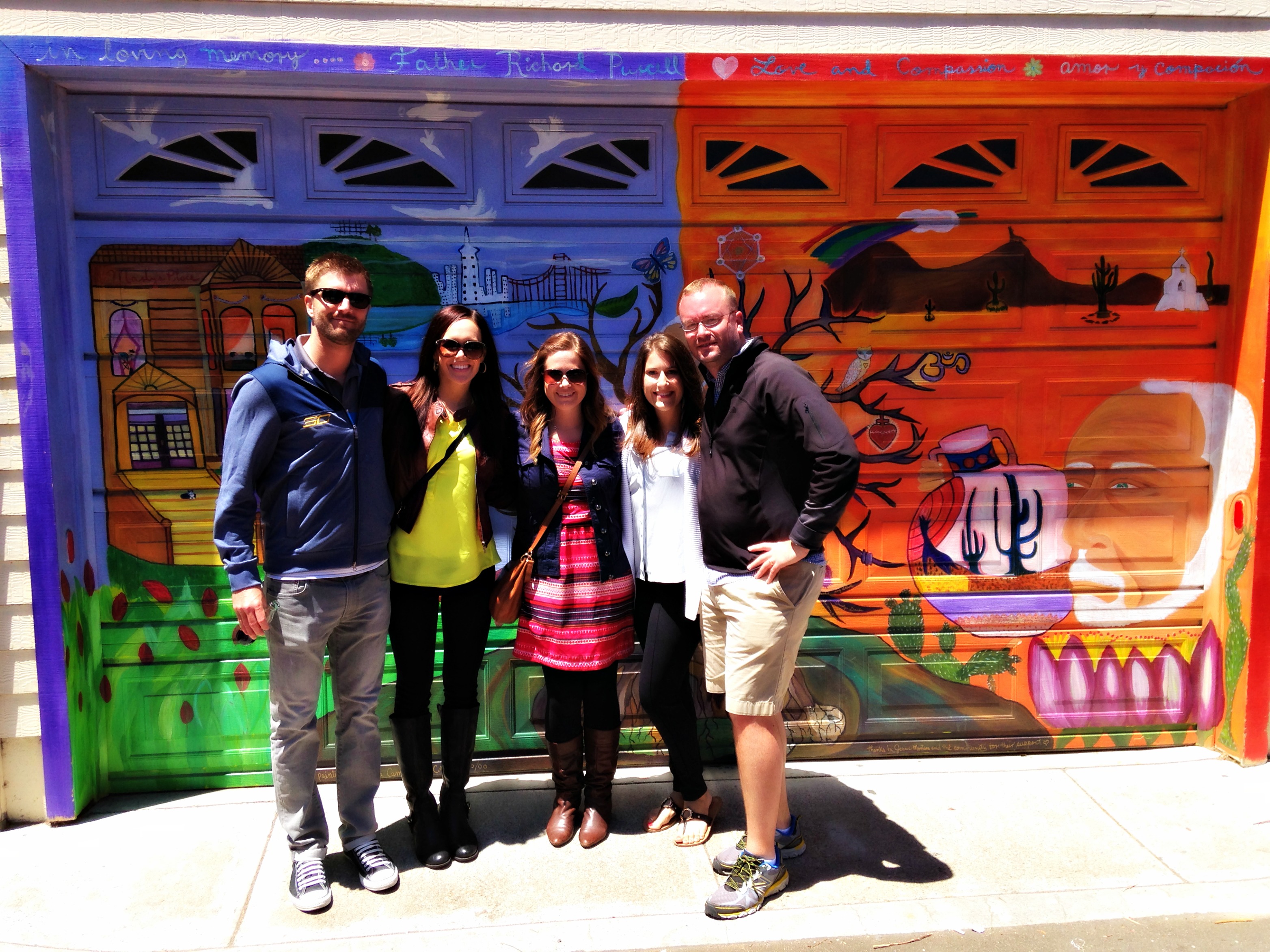 The art walk helped clear room in our bellies before the second half of the food tour took us to some of the best eats of the day. And that’s no small feat.

Just a few steps away we stumbled on La Palma Molino Y Tortilleria for the shop’s famous masa. 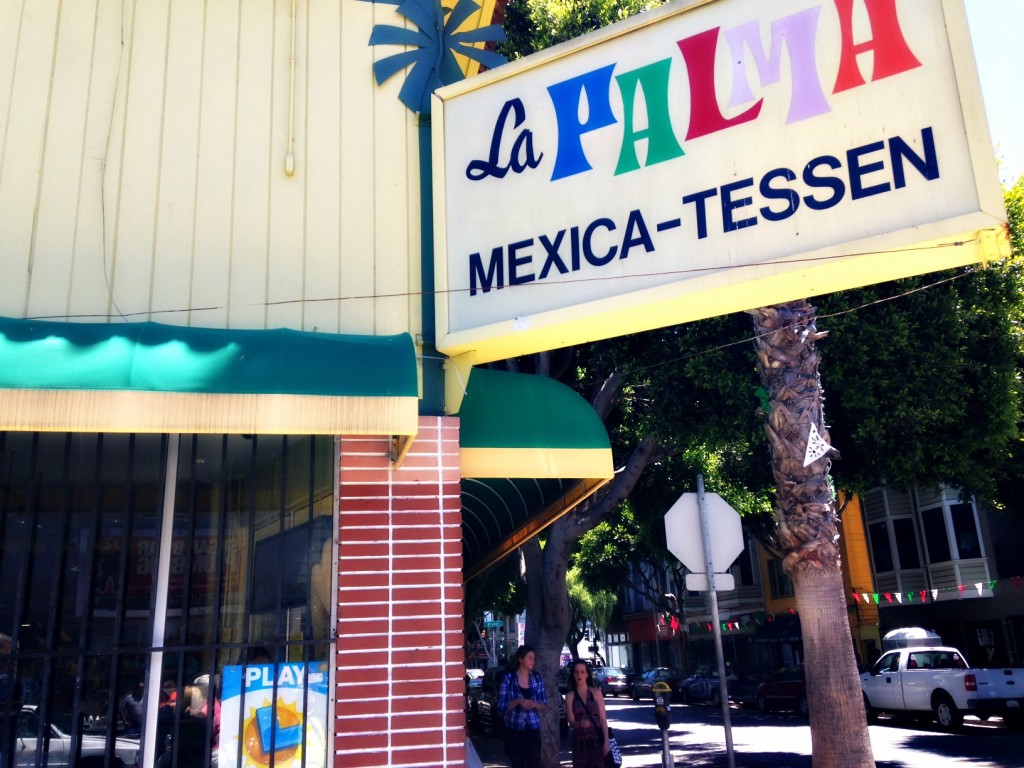 Most of us hadn’t tried masa before, and we learned it’s basically Spanish cornmeal dough with various flavors stuffed inside. Ours was stuffed with cactus. It was moist and strange and very doughy.

This was Dave’s favorite item on the tour. Here’s a look at the plate our group shared. 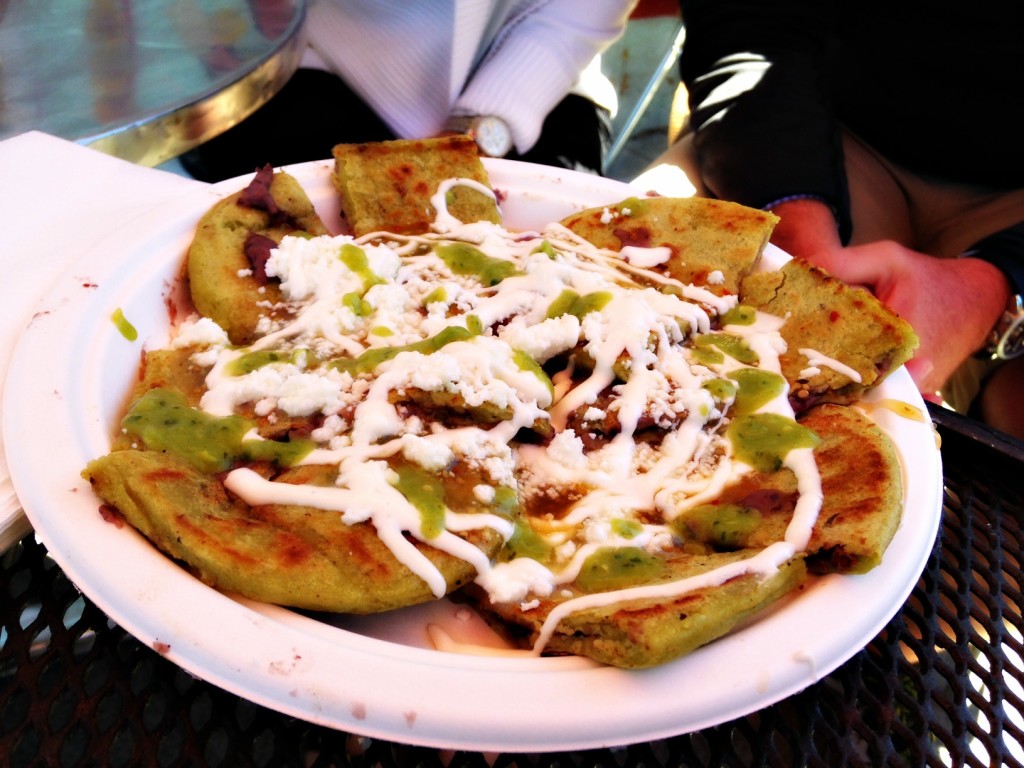 Next up, we moved on to another taco joint, where we had pork tacos and some of the freshest fruit-infused water I’ve ever had. I didn’t grab the name of this spot, but it was orange and red on the outside and there was a long line, so clearly it was a neighborhood favorite. 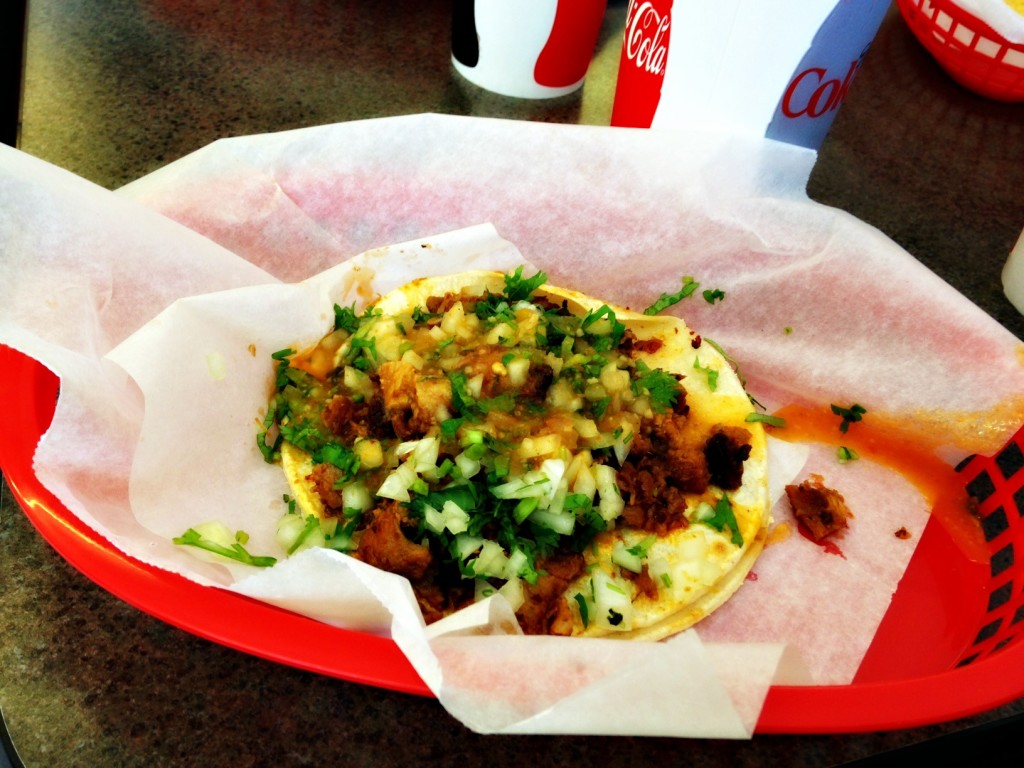 So yummy, so fresh … 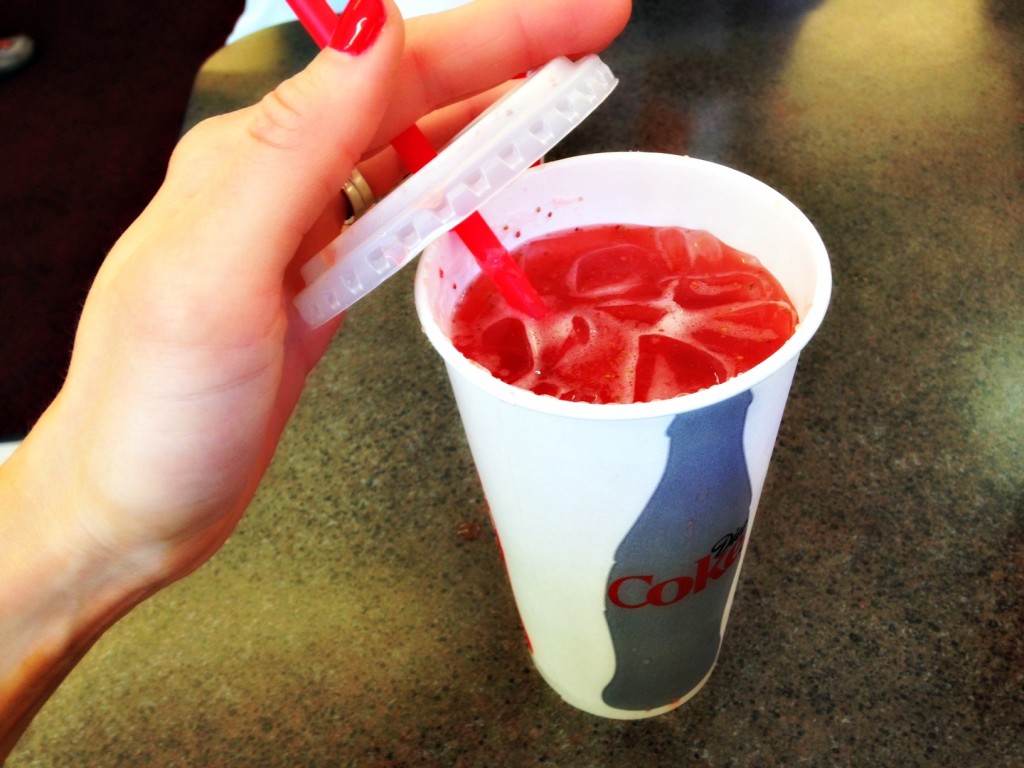 At our second-to-last stop, Chris left us to eat while he went to a nearby market and came back with my favorite item of the food tour called a guavabombo.

Guavabombo is basically heaven. It’s sweet powdered dough with a rich fruity inside. I devoured mine. Devoured it. I’ve never tasted anything quite like it before and I sure hope I do again.

Here’s Amanda showing off the goods … 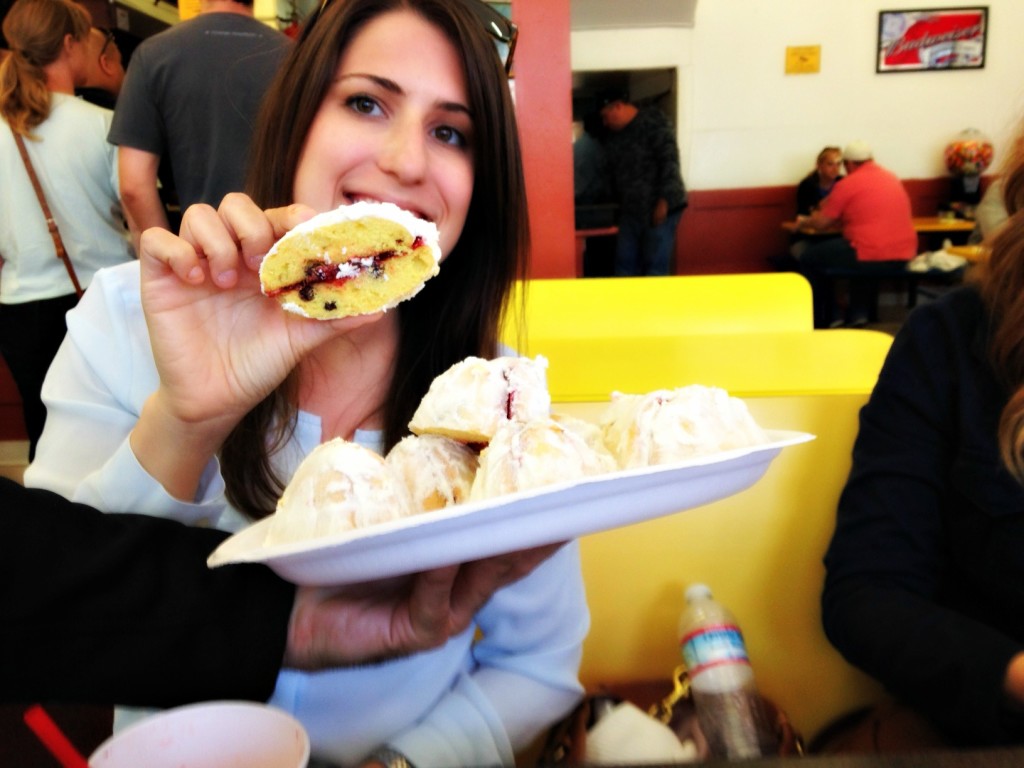 Our last stop took us through a local groceria, where we picked up our choice of frozen Mexican ice cream and learned about some of the imported products carried there. I selected a nutty flavor, which was a little bit bland. 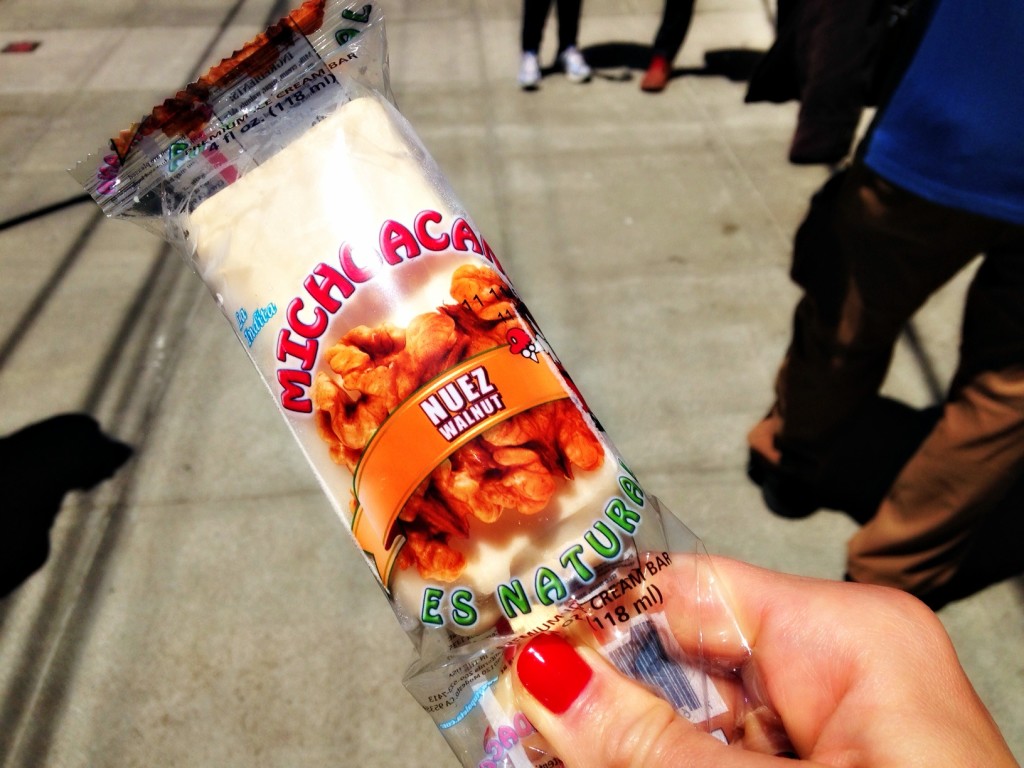 Too bad that was my last bite, instead of the guavabombo, which would have been a much stronger ending.

We were definitely stuffed by the end of the tour, even though it spanned four full hours. I didn’t finish every bite, but nearly every bite, because it was all so good.

A few of us were a little tired that day, because we had a big Fourth of July the day before, but I can say it was absolutely the highlight of the weekend for me. I love learning. I love food. I love walking. I love San Francisco. Because of that a food tour is pretty much the main event for me.

The rest of the group enjoyed the experience too, but I’m pretty sure I was the biggest fan.

Chris Milano did a fabulous job, and I’d recommend his tour to visitors and locals alike. He even sent out this group shot of everyone on the tour later that afternoon. That’s good follow-up right there. 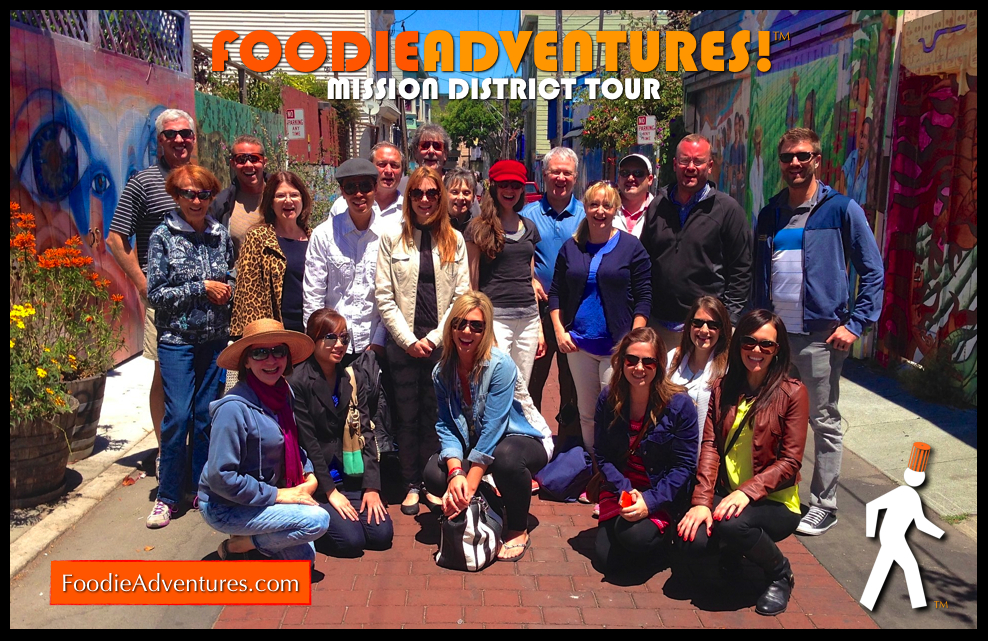 Can you tell he had us say “TEQUILA” for this shot?

Thanks, eateries in the Mission.

Thanks, friends, for humoring me and going on this adventure.

Have you ever been on a food tour? Do you like to check out local gems or do you prefer the safety chain restaurants?