Hey, friend! How are you?

I’m doing well! This past week was not quite as crazy as the one before when I was planning for Brady’s party alongside doing a bunch of extra work projects, thank goodness.

This week, I spent some time wrapping up party stuff (making and sending digital thank-you notes and returning the things we borrowed), I taught my usual five classes, I worked (one morning at a coffee shop, which is always a treat), I took Brady to his 5-year check-up (and he got two vaccines, so he wasn’t too pleased with that appointment), I went shopping with my mom for a dress for me for an upcoming wedding, and that’s about it. (I also made this little video for you, so check it out if you need a boost.)

And I’m still enjoying some sunflowers I put out for Brady’s party. They always start to open up days later and get even more bright and pretty. 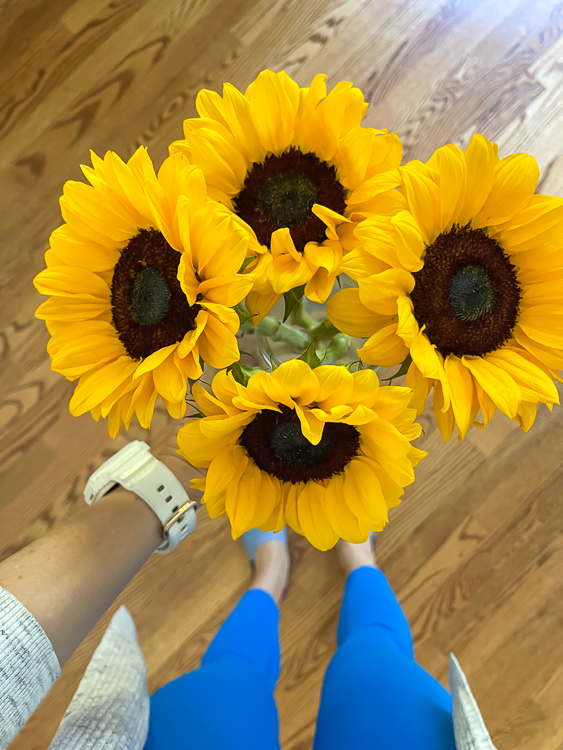 This coming weekend, Brady has soccer, I have tennis, we’re going to a birthday party for one of his school friends, we’re going apple picking (rescheduled from a couple weekends ago), and Dave and I may get out for a dinner date as well. I know I say it all the time, but our weeks fly by, and then our weekends do too. I wonder why? 🙂

Let’s move into the faves for the week …

Taking Brady to Disney on Ice at Bojangles Coliseum

Honestly, I don’t know who had more fun at this activity, Brady or me. I heard that Disney on Ice was coming a couple months ago and jumped on tickets, because I really wanted to go, and I was eager to take Brady to his first live performance. Dave wasn’t super interested, so I decided to take Brady alone, and we had the best time together (Dave definitely missed out).

But we did go to lunch with Dave and my mom before the show at our nearby favorite, Sunflour Baking Company in Ballantyne, so they could send us off with full bellies … 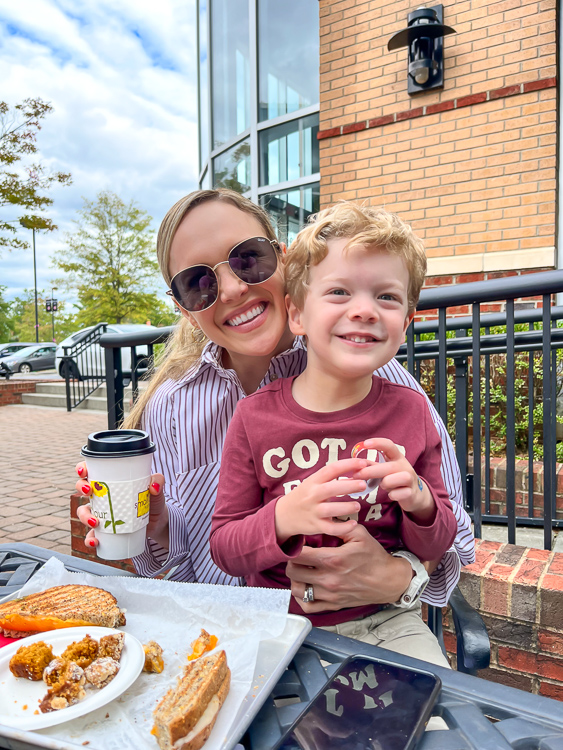 I bought fairly inexpensive tickets for Disney on Ice, but once we got there, we had really good seats, which was a nice surprise. I was expecting us to be much further away from the action, but we were super close, and that was awesome.

I had never been to Bojangles Coliseum in Uptown Charlotte (which is downtown, by the way) before, and it’s an old arena (apparently built in 1955, I discovered upon a bit of research), and it really shows its age. But that didn’t matter for this activity, because all we did was hit the potty, head to our seats, hit the potty again and leave.

During intermission, I was taking a selfie of Brady and me when a nice dad from another family offered to take our picture. We appreciated that, even though there was too much going on for Brady to look at the camera, of course. But we did capture this memory … 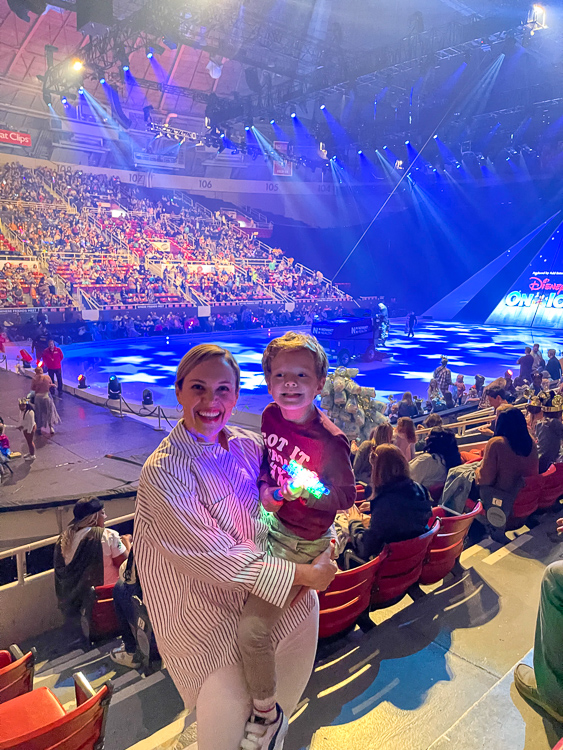 (My oversized button-up shirt is sold out, but here’s a similar button-up version. And I’m wearing it with my favorite white jeans, which happen to be on sale right now.)

However, I will say that getting there wasn’t fun. It was only supposed to take us 27 minutes to get to Bojangles from our house, and the traffic was insane to get off the exit. I found out once we got there that there were some parking issues, which backed up all the way onto the highway. Nonetheless, we sat in stand-still traffic on the highway for about 25 minutes and ended up walking in to the show 10 minutes late, after having given ourselves a full hour to get there. We weren’t the only ones, and the lines to get in were long even that late. No big deal though.

The good news is that we didn’t miss much, and Brady didn’t even know we were late. What’s super cute and funny is that I had told Brady several times we were going to Disney on Ice. But in the car on the way there, when we were talking about it, I realized that he thought Disney on Ice was a movie. He didn’t know there would be real people performing and skating, and once he understood that he was even more excited than before.

Once we got into the arena, Brady was entirely silent, which is very strange for my talkative boy. He was mesmerized, transfixed and in awe. He asked me to keep my arm around him for the first half of the performance, then he sat in my lap the second half. During intermission, he had his eyes on the Zamboni machine on the ice, once again, transfixed.

Overall, the entire thing was fun for him, and it was the biggest crowd he’s ever been in. He did really well, although I did carry him out of the arena and back to the car, which was a 15-minute walk, and that was tiring.

Our Disney on Ice performance was half “Frozen” and half “Encanto,” and they did a truncated version of each story, with ice skating and music. In order to shorten the stories, one of the characters from each storyline narrated and filled in the blanks, which worked out really well. The skating was awesome (outside of poor Elsa taking a tumble during her big rendition of “Let It Go”), the costumes were awesome, and there were some fun special effects like fire on the ice, Isabella swinging from the ceiling on a flower swing and much more. Also, to top it off, Mickey Mouse, Minnie Mouse and the classic Disney crew opened and closed the show, and some other Disney characters came out too. 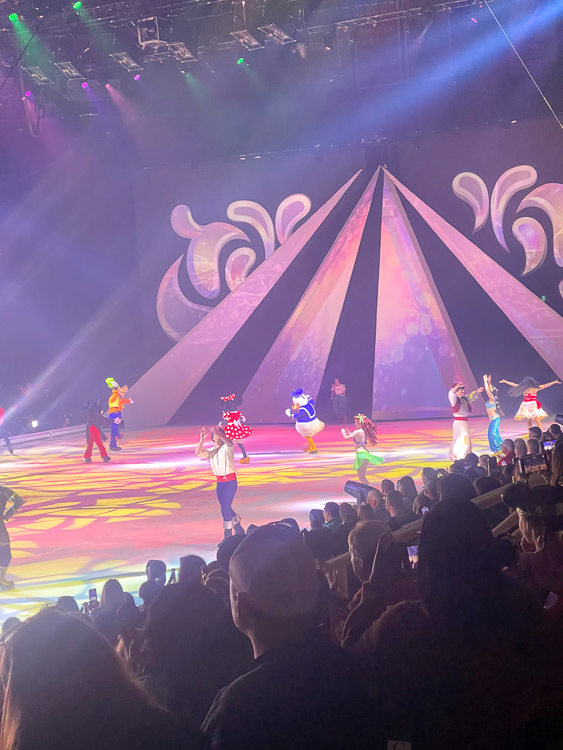 The music was loud, but not too loud, and many kids were definitely singing along. But in case you’re wondering, the singing is definitely not live. I wasn’t sure if it would be, and it wasn’t. Brady was silent, but we clapped together, and he was having the best time — he even whispered to me “thank you for taking me to Disney on Ice, Mommy” during the show, which was basically the only thing he said the whole time.

I love a good performance, I love Disney, I love ice skating, and I love that I took my little man to experience this together. He was an angel, and I want to find us something else to attend ASAP. This activity was a slam dunk. 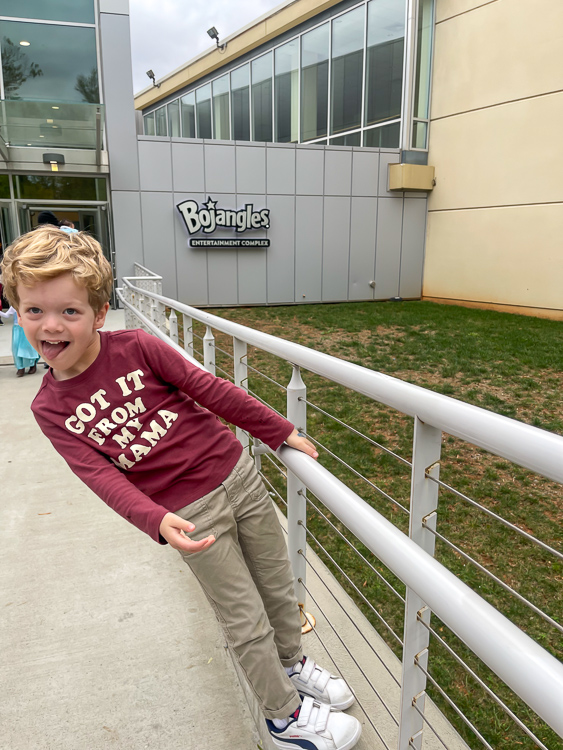 Also side note: The light-up wands that a lot of kids have during Disney on Ice are super expensive, so our friends who had gone the day before let us take one of the wands they bought off Amazon. It saved us $40, and we were appreciative of that. Although, Brady broke the wand, so we owe our friends.

A weekend of celebrating Brady

I’ve already shared a recap of Brady’s 5th birthday party, but we did a lot of celebrating even before the party. Brady didn’t have school on his birthday (local schools were cancelled for the tropical storm, but we didn’t end up getting very bad weather after all), so we took him out for donuts in the morning. 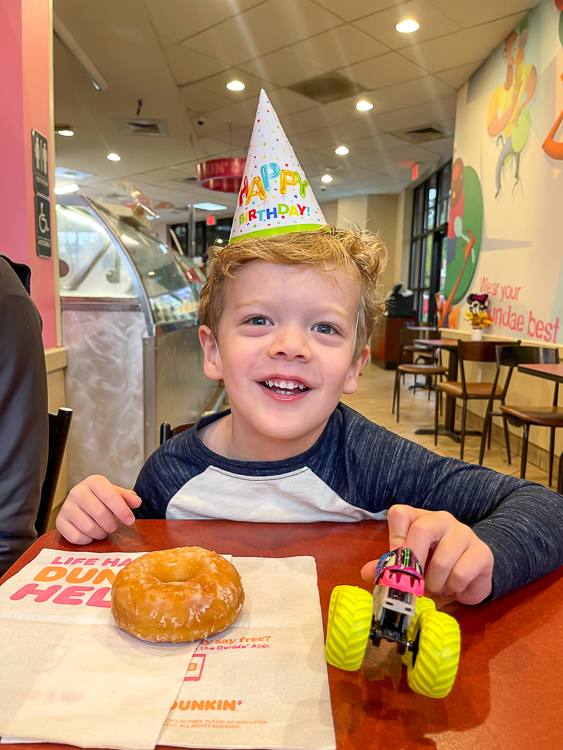 While we normally like to patronize local establishments, we went with Dunkin’ this day. Brady likes super simple plain-glazed donuts, and I got a pumpkin spice latte with oat milk, which was actually really good. 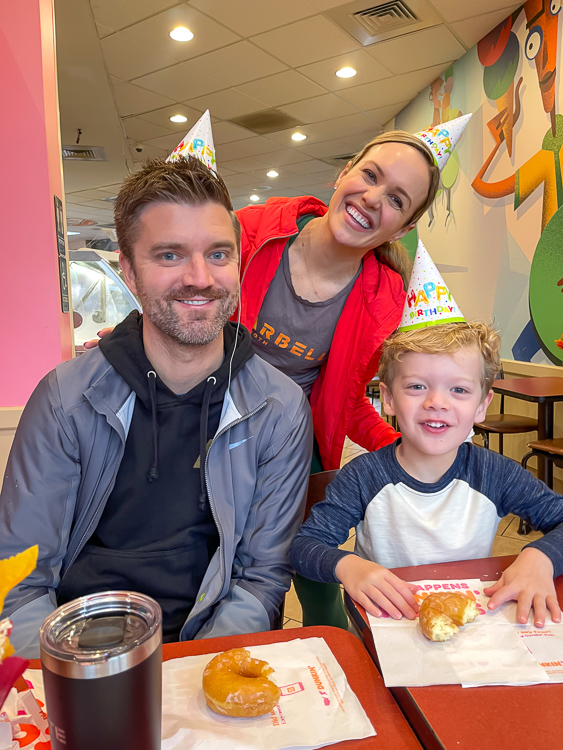 To top it off, we had my mom with us. Later that day, I took Brady to the gym with me, and because it was his birthday, he had a “5” on his gym kid-care sticker, and he told everyone it was his birthday. This was fun for him. Some of our sweet friends at the gym even brought him balloons and cookies, which was so nice.

Overall, this little man felt super loved, appreciated and celebrated during this birthday weekend. And he got to open presents two times, which he enjoyed. While we try not to promote materialism, he’s very much into gifts, and now he has a ton of new stuff to play with.

My workouts from last week

Here’s where I share a recap of my previous week of workouts. I share this to show you how I try to get diversity in my week, and how I always take a rest day (almost always). But remember, I do a little bit more than the average person, because I’m a group fitness instructor. 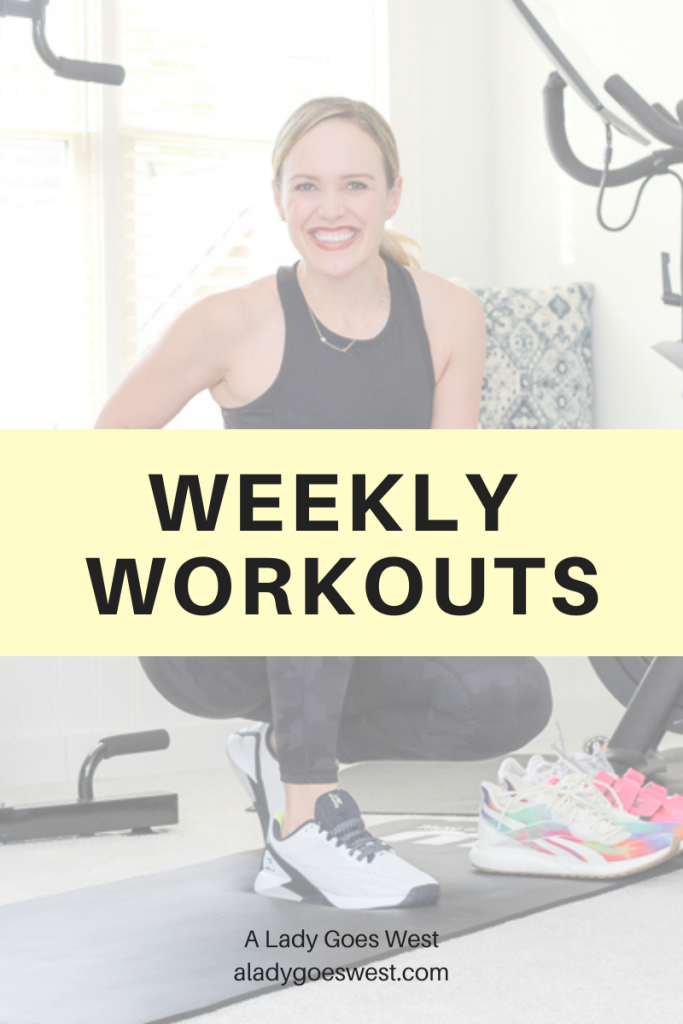 Workouts from the week of 9/26

This past week was full! I taught six classes, I went to tennis, I took a rest day with nothing but a slow walk, and I did one solo weights workout at home. I didn’t get in any yoga, but it seems I can never quite fit everything, so overall this week of movement was diverse and fine.

Discount of the week …

My favorite protein bars. I talk about these G2G Bars a lot, because I love them so much, and I eat them several days a week. Right now, you can mostly only get them on the G2G website, and they are worth the online order. Minimal ingredients. 18 grams of protein. Great flavor. You keep them in the fridge until you’re ready to eat, then let them get up to room temperature, although they can stay out of the fridge for up to 30 days if you need. If you’re in the market for a hearty protein bar, try G2G and use my code ALADYGOESWEST for 15 percent off at check-out on the G2G site here. 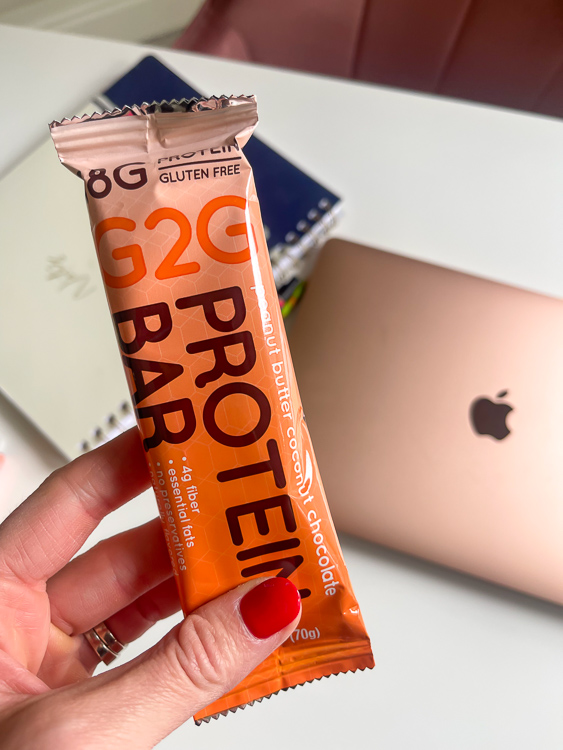 Best read of the week …

Here’s a light read that I thought was interesting:

Habits that have been wiped out. I’m lucky to have been a teenager before social media or the widespread use of cell phones. I remember what it was like to call someone’s house. I remember being required to read the whole print newspaper before showing up to work at a public relations agency back in Orlando. And I remember using a print map while trying to navigate around the streets of Florence when I studied abroad in Italy during college. Well, you don’t have to do nearly any of these things any longer. This one is not related to health or wellness, but it’s a fun/light look at some habits that have been wiped out over the years.

Quote of the week …

Here’s a thought from a recent meditation on Headspace that I wanted to share here: 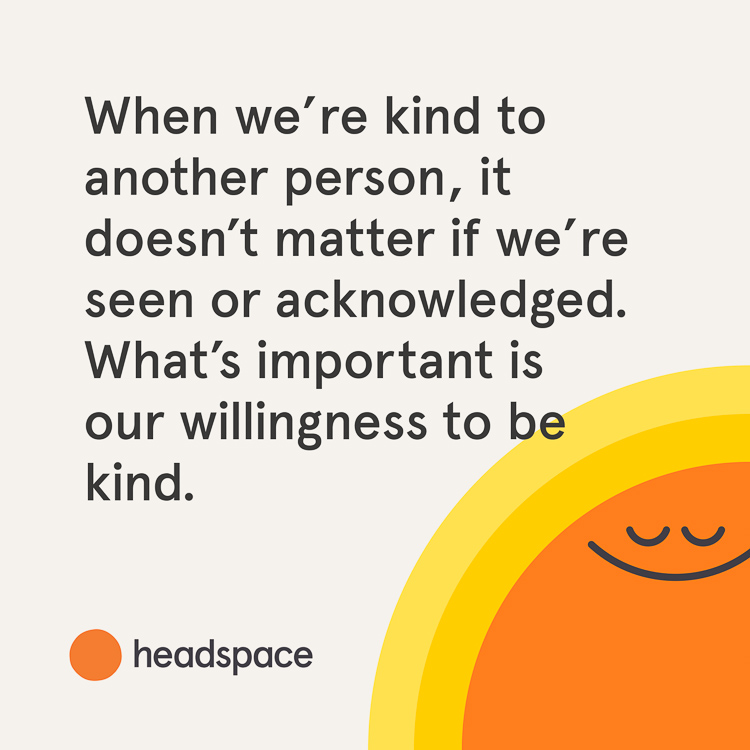 Blog archives of the week …

Let’s look back at two blog posts worth revisiting, including a recent one: 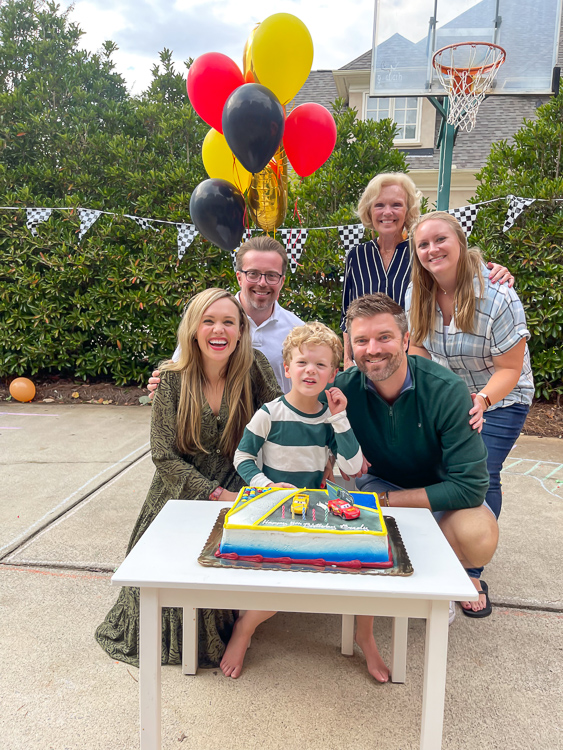 Acupuncture. I recently shared this post with someone who was asking about acupuncture, and I thought it would be a good one to revisit. I need some acupuncture back in my life … “What it’s like to get acupuncture and why you may need Traditional Chinese Medicine.” 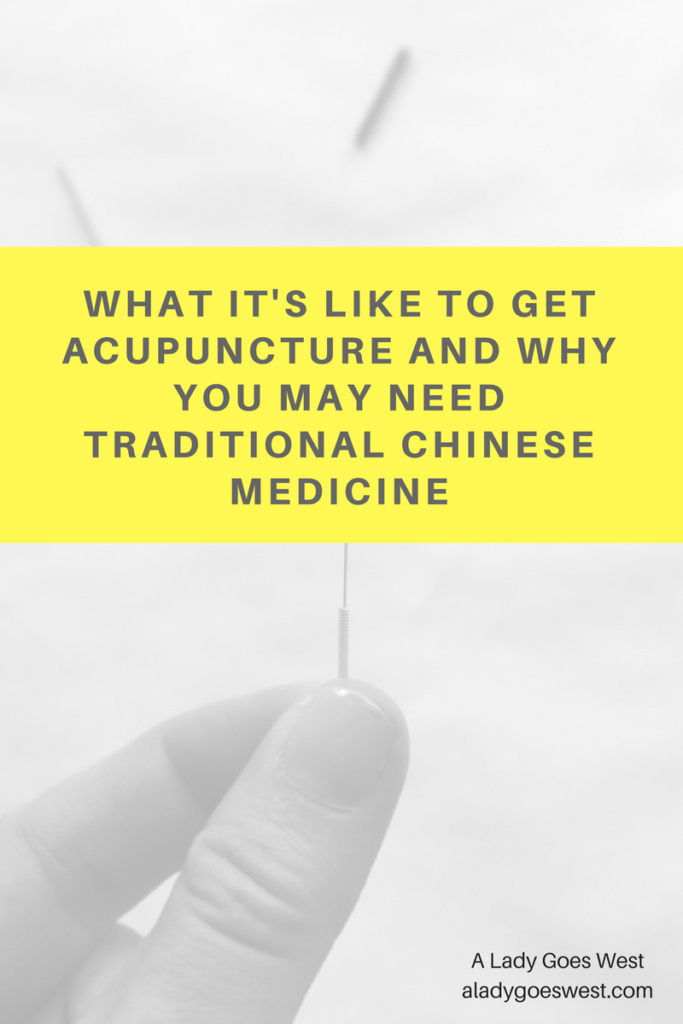 That’s it for today, my friend! Please have a safe, healthy and hydrated day and weekend. I’ll see you back here soon. 🙂

Questions of the day for YOU …

How was your week?

What’s one thing you’re looking forward to this weekend?

Are you a fan of fall activities?