The Greek Theatre on the University of California, Berkeley campus is an incredible place to see a concert. The only other venue that I’ve enjoyed as much is the House of Blues in Downtown Disney in Orlando, Florida because of its incredible acoustics in an indoor setting.

On Saturday evening, Dave and I attended our third ever Dave Matthews Band concert and our second concert at the gorgeous outdoor Greek. (We went there last year to see Guster and Dispatch and had an awesome time.)

As expected, this evening outside of the San Francisco city limits was a major success.

We left the city around 3:45 p.m., took a 20-minute BART subway ride across the Bay and hopped out at the downtown Berkeley stop, which is right in front of the university. Here we are on the BART armed with excitement and backpacks … 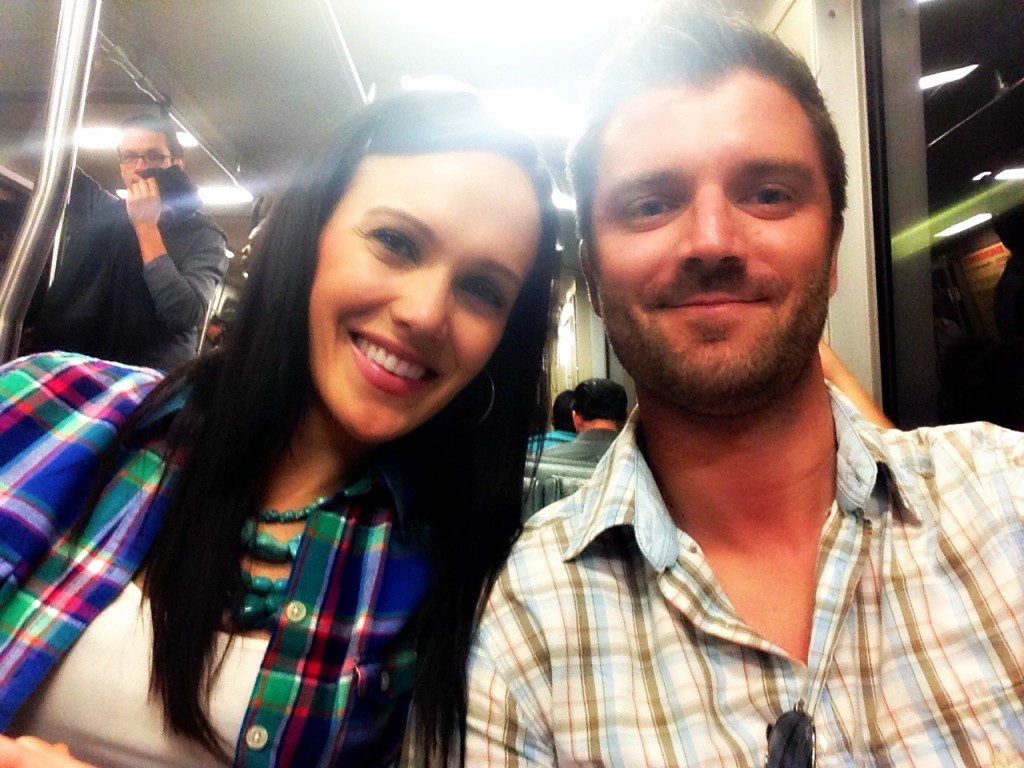 No, we didn’t plan to both wear plaid. But now that I look back at the pictures, it sure was matchy-matchy. We seem to do that sometimes, and always unintentionally.

Nonetheless, once we arrived in Berkeley, we walked across the UC campus and saw a bunch of parents touring around with their kids, who must be about to start their fall semester.

It was much warmer over there, and the walk was a little bit uphill. I didn’t particularly enjoy that aspect of our day, because my legs were absolutely dead from teaching BODYATTACK earlier. But we made it to the venue, and got in line for the concert at 5 p.m.

Even though the line was incredibly long, we were only in it for like 30 minutes before the doors opened at 5:30 p.m. Once we went inside, it was free reign for everyone to find a seat, because all of the tickets were general admission. And lucky for us, we got great seats about halfway up the cement coliseum seating on an aisle. 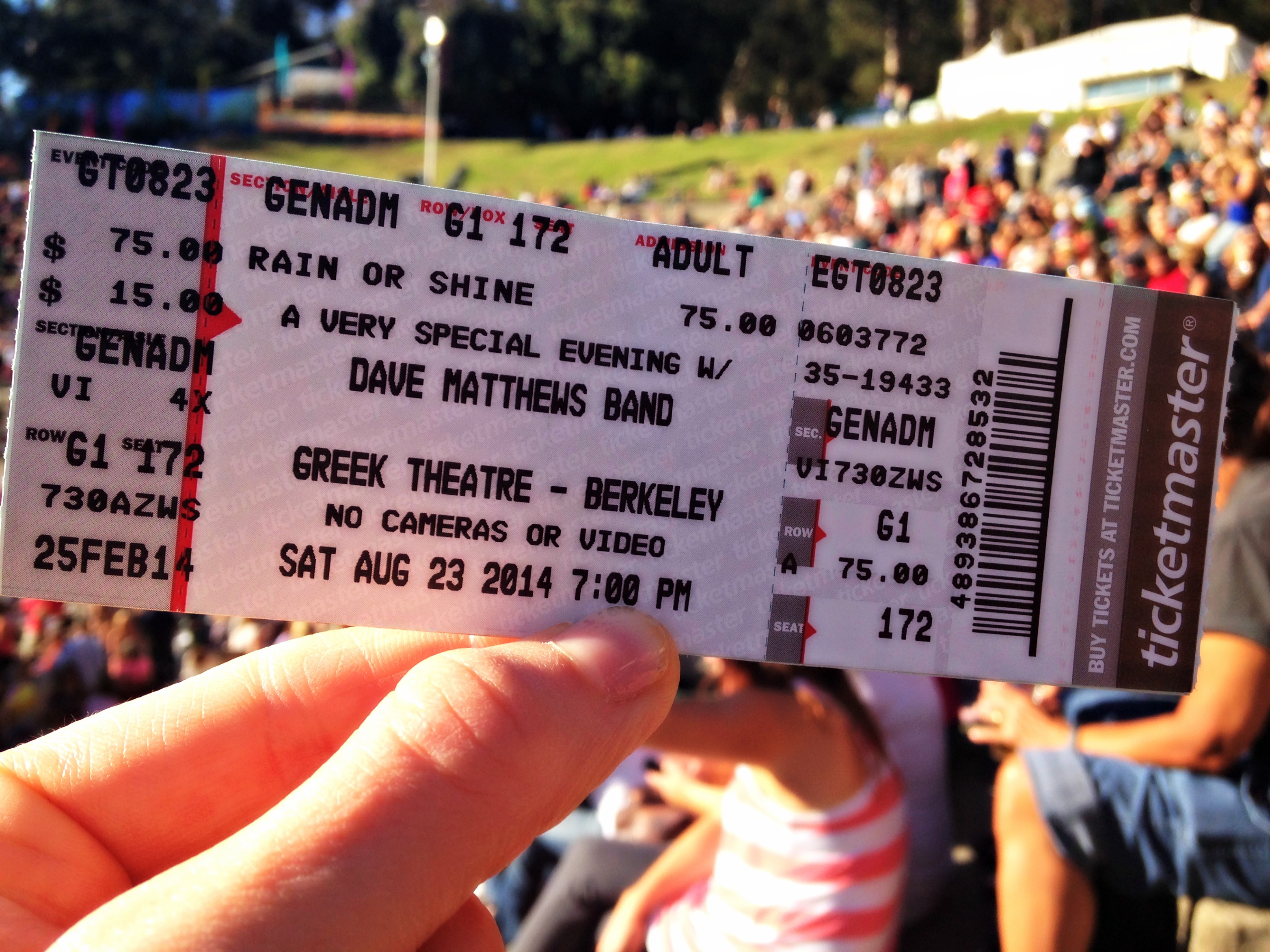 Do you see that the ticket says “A Very Special Evening with Dave Matthews Band”? Yes, it sure was. 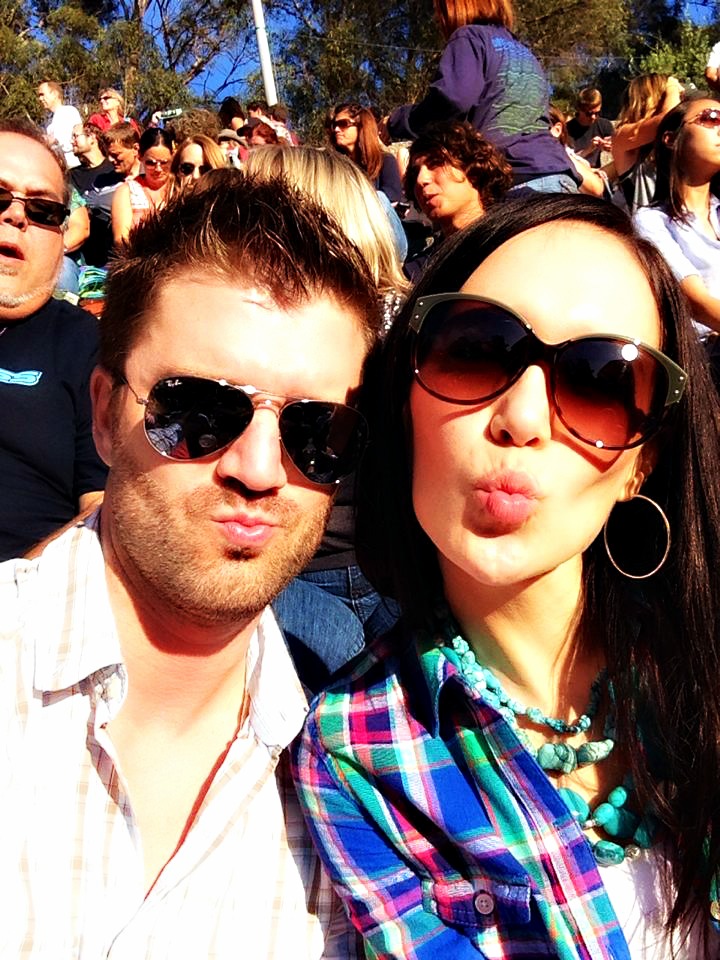 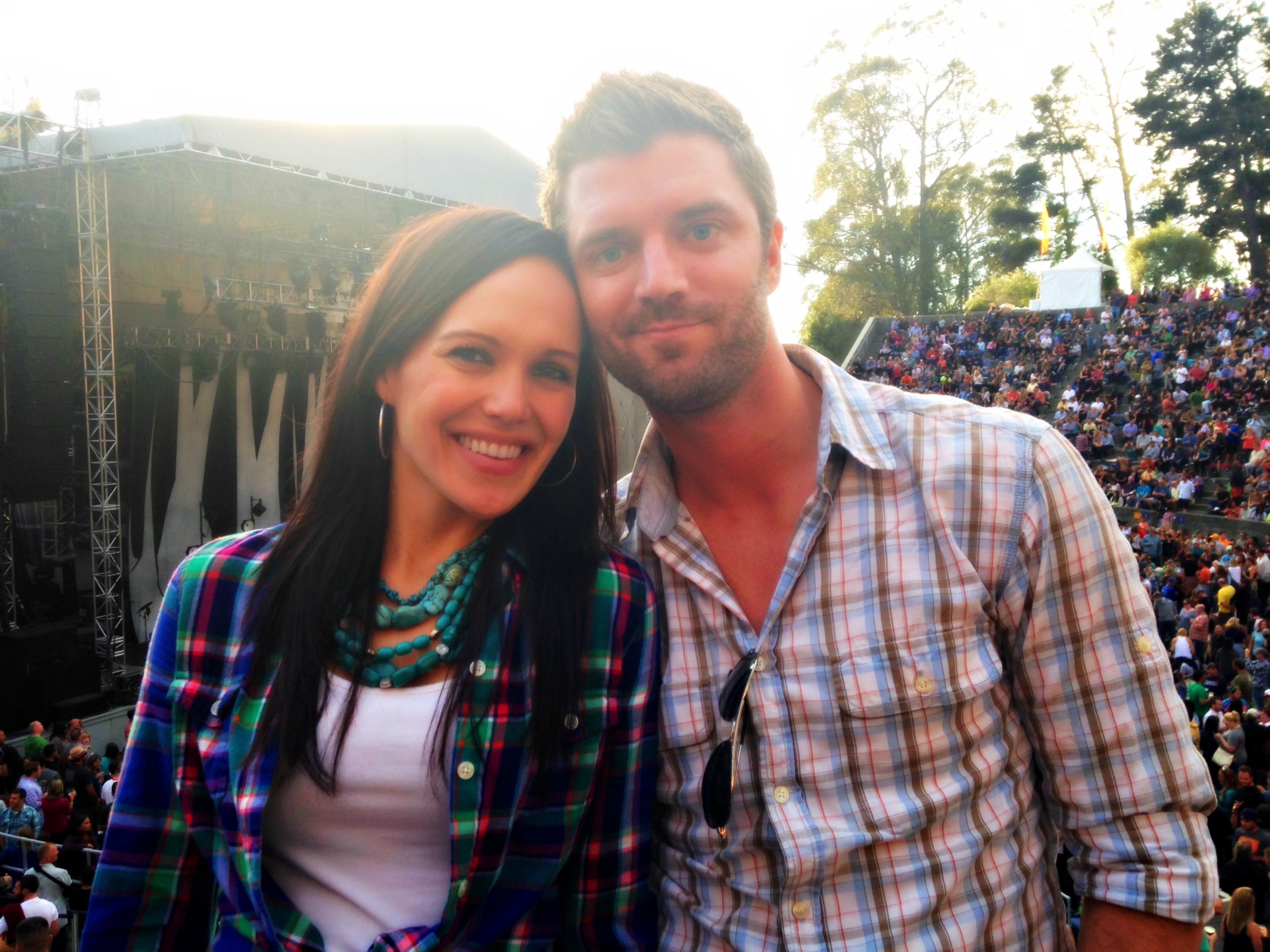 There was no opener, and Dave Matthews Band came on just a little after 7 p.m. At first he played strictly acoustic tunes, then after an intermission, he invited out the rest of the band for the electronic portion of the show, which also featured some back-up soul singers. Dave and I haven’t purchased the latest DMB album, so there were a few new songs we didn’t know. Otherwise, we sang along the best we could to all of our old favorites. 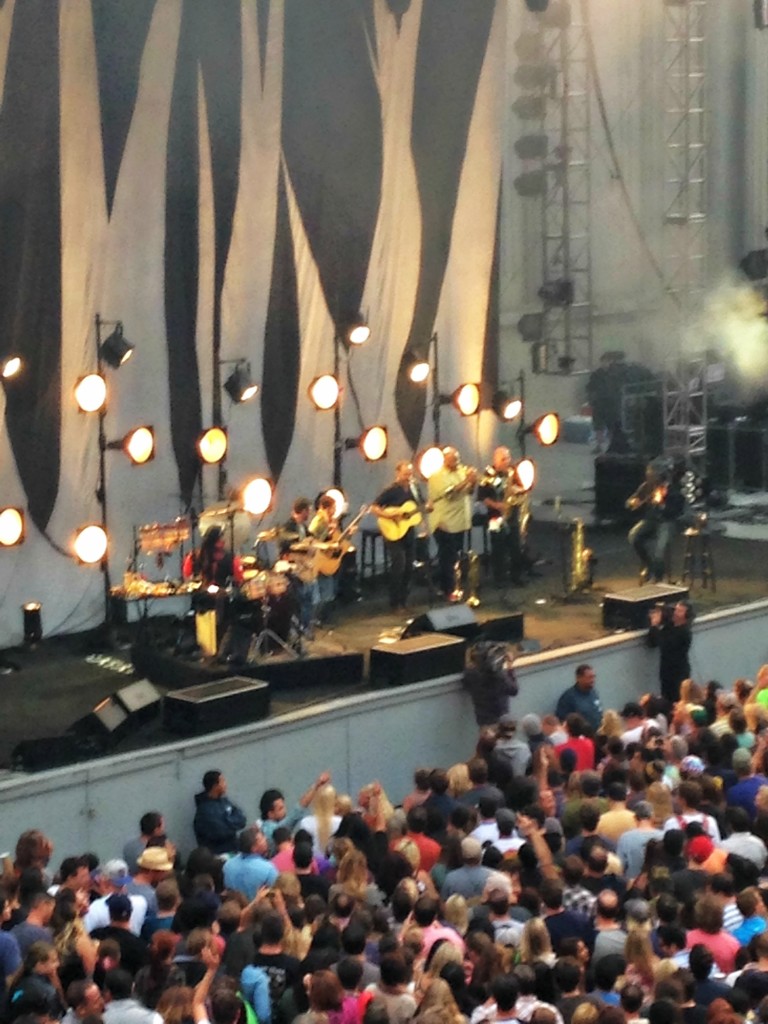 This view is much closer up than we’ve been during previous DMB concerts.

In fact, this DMB experience was much different than our last two, both of which took place at the West Palm Amphitheatre in Florida after long, silly and hot tailgating pre-game sessions with friends outside the venue. This time, without the tailgating, the people and the setting were much more laid back and much more focused on the actual concert and music.

But in order to have a little fun, guess what we did do? Snuck in a beverage. That’s right, security at the Greek is not super tight, and so I just happened to have a little closed-off cocktail tucked into my backpack that made it in just fine.

We also brought some of our own food, which is something that is actually allowed at the Greek. Right before the show started, we each pulled out a tasty Trader Joe’s salad, and then hit up the concessionaire for some beer and a chocolate chip cookie for dessert.

Outside of a few trips to the bathroom and bar, we spent much of the night just reveling in the perfect weather and scene … 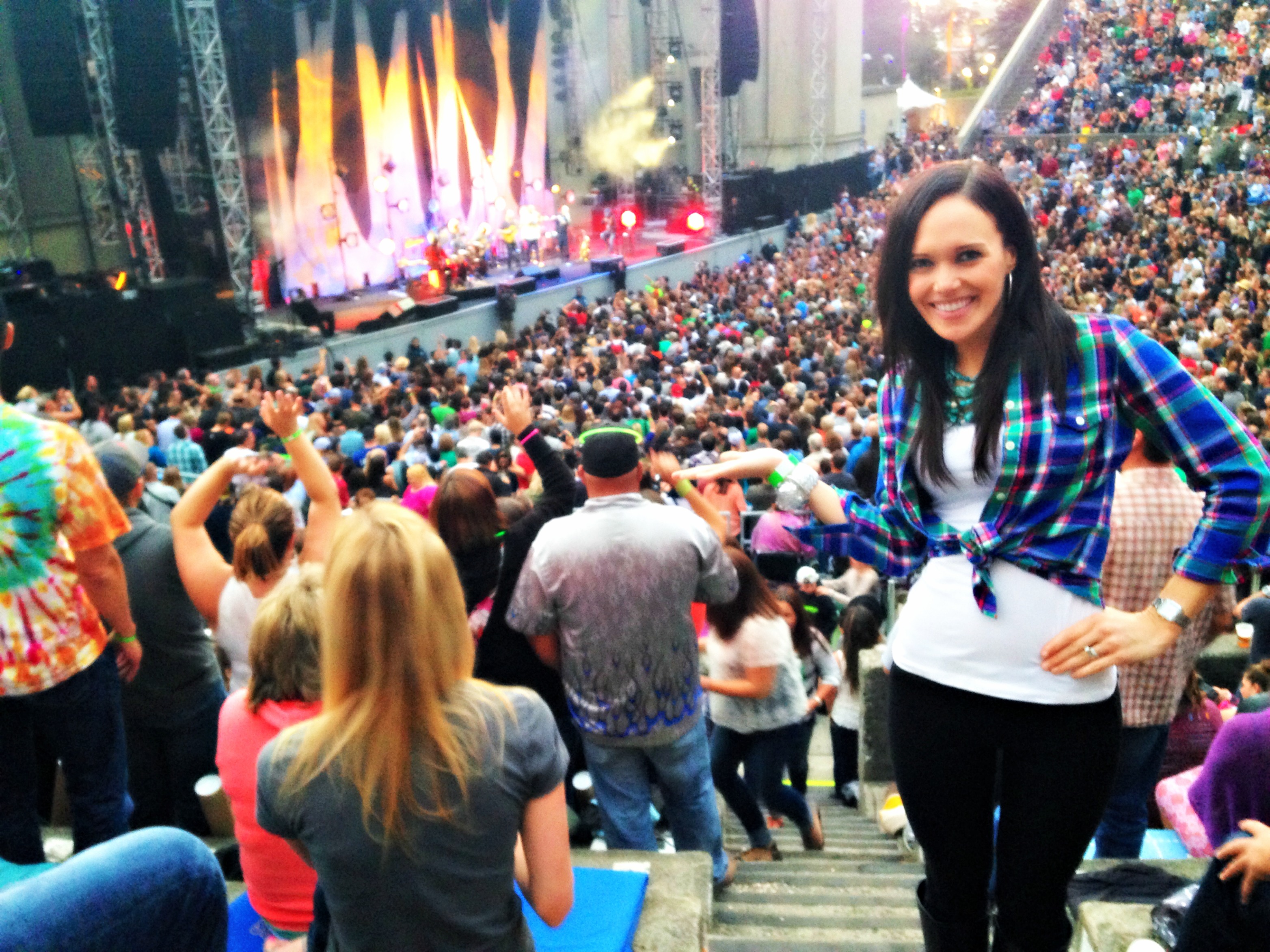 Everyone around us was very nice, and we chatted with our neighbors throughout the show. We danced, we sang, and we enjoyed the breeze.

The concert was pretty long, and even though we left during the encore, the exiting process was not fun. There was a heavy crowd of people walking to the BART station on a sectioned-off path through the university directed by cops, and it took forever to walk. I logged so many miles that day (according to my Jawbone UP24 band, I took more than 21,000 steps, covering 11 miles), therefore I was not super enthusiastic about ending a great night with another long trek. And then, once we finally made it the station, we realized we would need to make a transfer to get back to our stop in the city because of the late hour, so instead we decided to get a very expensive Uber ride.

We arrived home just before midnight, pooped, but happy. So pooped in fact, we slept through our very first San Francisco earthquake that night.

Overall, it was a fun night out at one of the greatest live music venues around. There’s not much I like to do more than enjoy good music in a good setting. And for those of you that have plans to attend a concert at the Greek one day, feel free to stow some sustenance and spirits in your backpack. But you didn’t hear that from me.

What was the last concert you attended? Do you prefer indoor or outdoor shows? How was your weekend?