Hiya friends! I’m coming at you with a world of good things today, including what I’ve been up to, my latest favorite products, inspiration, talk of the weekend and more. Shall we?

This week has been a busy one. Teaching BODYPUMP 100, working, doing a training session (I’m using up a small package of personal training sessions once a week and totally loving the extra full-hour strength session with my trainer/friend Will), working some more, teaching Bootybarre and hanging out with Dave and Rudy. This upcoming weekend, we’ll be having dinner out, maybe going on an outdoor adventure and then watching the Super Bowl with friends, of course. Dave’s originally from Maine, so he’s a huge Patriots fan. I, however, like the food table and commercials. You’ll find me in the kitchen or standing in front of the TV during commercial breaks. What about you?

Do you guys watch my Instagram stories? If so, you got a major flood of excitement from me this past Friday night. Dave and I were in the City for a cool event at The Fairmont Hotel in the Nob Hill neighborhood of San Francisco (just a street away from where we used to live). We got to the event very early after another appointment, so I actually used the fancy bathroom at The Fairmont to do my hair, make-up and jewelry — and change my shoes, because clearly I wasn’t wearing heels on the BART or on the uphill walk to the hotel. We sat in the lobby for a bit chatting and people watching, before it was time to check into the Coaching Corps Game Changer Awards Gala. (Coaching Corps is an organization that makes sure all kids get to work with a coach in sports, regardless of their socio-economic status.) 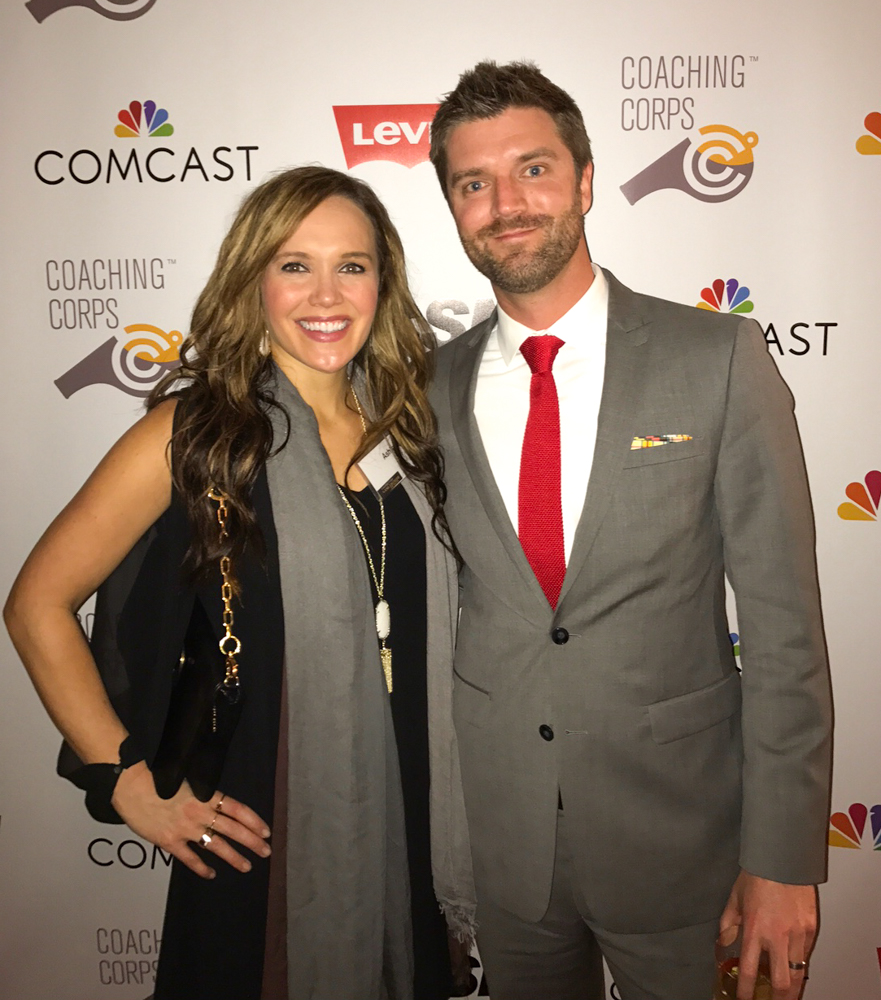 From there, we went to a VIP reception and met up with several of Dave’s coworkers and enjoyed a sparkly beverage, a speech and cheers. That was followed up by another cocktail hour, before we finally ended up in the grand ballroom around 6:30 p.m. for the program and seated dinner. While the food, drink and scene were excellent, the real reason I wanted to tell you about this event was the inspiring messages that I heard.

There were four professional athletes who were there to honor the coaches that made an impact on their lives, and it was SO MOVING. These athletes weren’t always famous or stars, in fact, many of them had rough starts, and it took a positive role model to shape them and help them to grow into the successful men they are today. While it would have been nice to see a professional female athlete up there, I still really enjoyed everything I heard and learned. The whole deal was televised on ESPN two nights later, and we never checked to see if we made it on-screen, but you never know. We were sitting at the table behind Draymond Green and George Kontos (Warriors and Giants players, respectively) and so perhaps our little faces appeared behind them when the cameras were affixed on them. 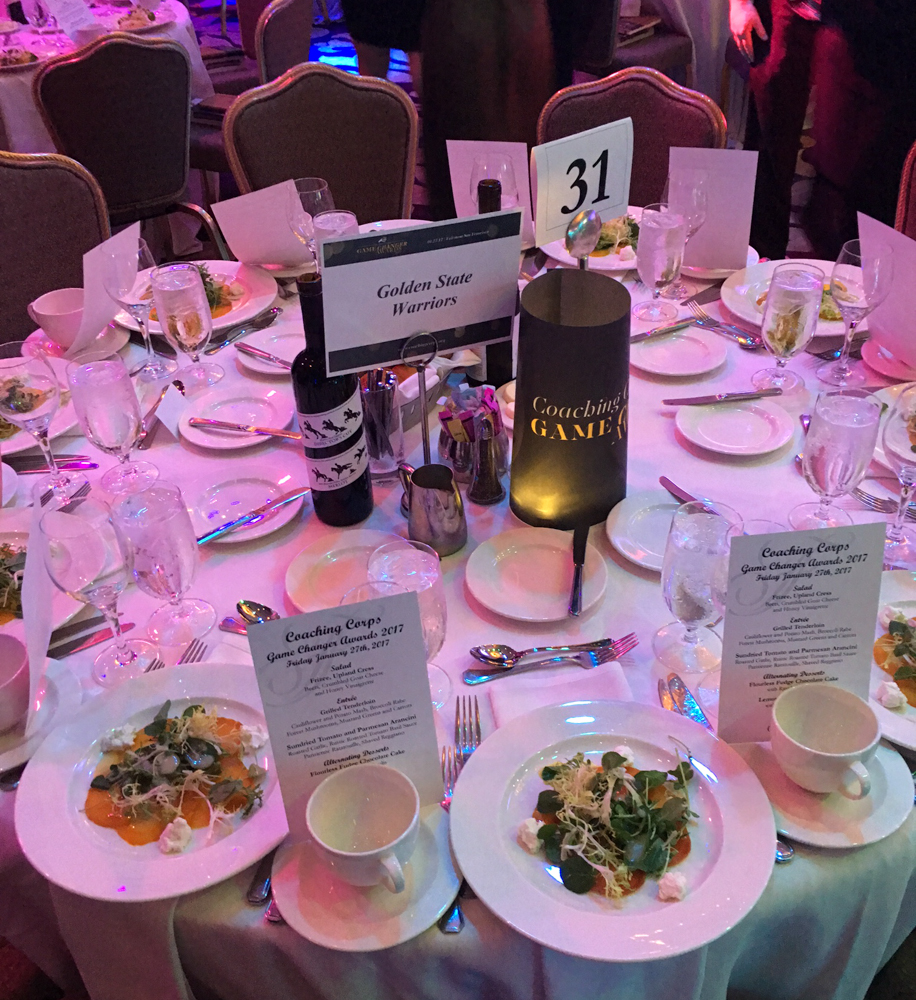 Moral of the story: Be a coach. Be a mentor. Help others. You never know who will be making millions one day and come back and thank you for all you did for them. Or just do it out of the goodness of your heart expecting nothing in return. Either way, do it. 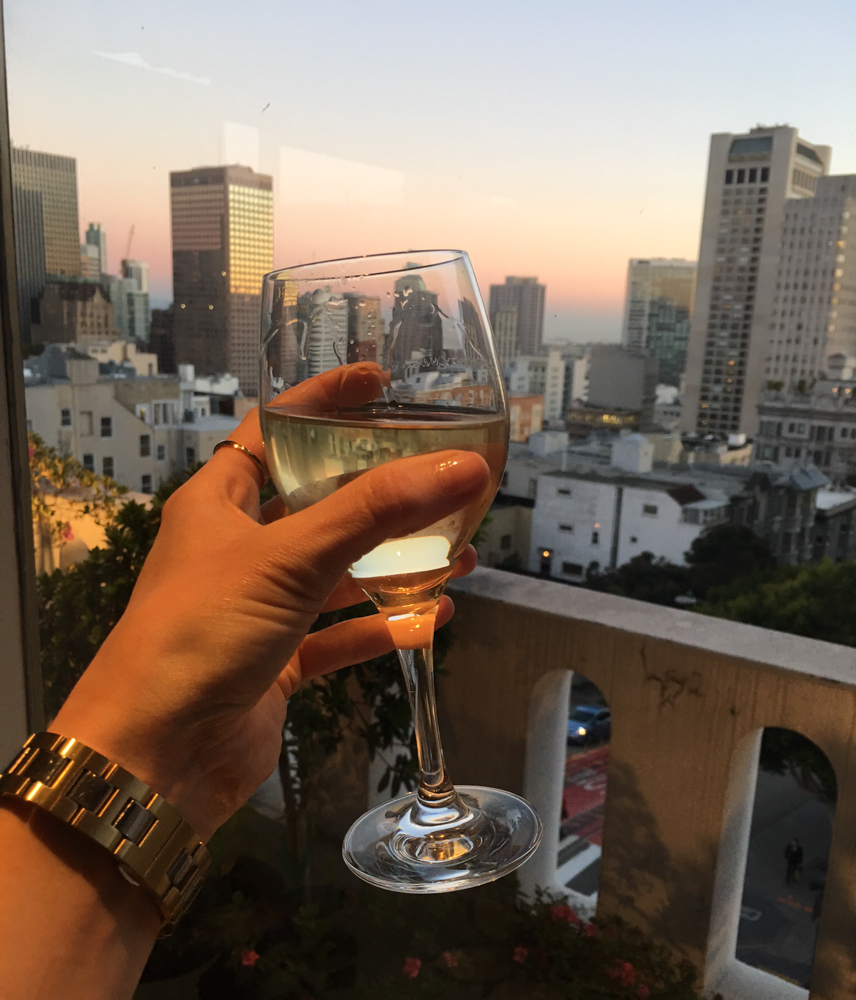 A lot of times the “healthier” low-calorie products are not as tasty. However, when it comes to Halo Top ice cream, well that’s not the case. It’s darn good. I posted a pic of this stuff on my Instagram a while back and many of you said you couldn’t find it in the stores. From the looks of the website, you should be able to find it at Whole Foods, Safeway, Publix or specialty stores. (By the way, you can always ask your local Whole Foods if they would carry it with a request at the front.) My favorite flavor is the red velvet, but all the ones I tried were delish. I would love to try oatmeal cookie next. 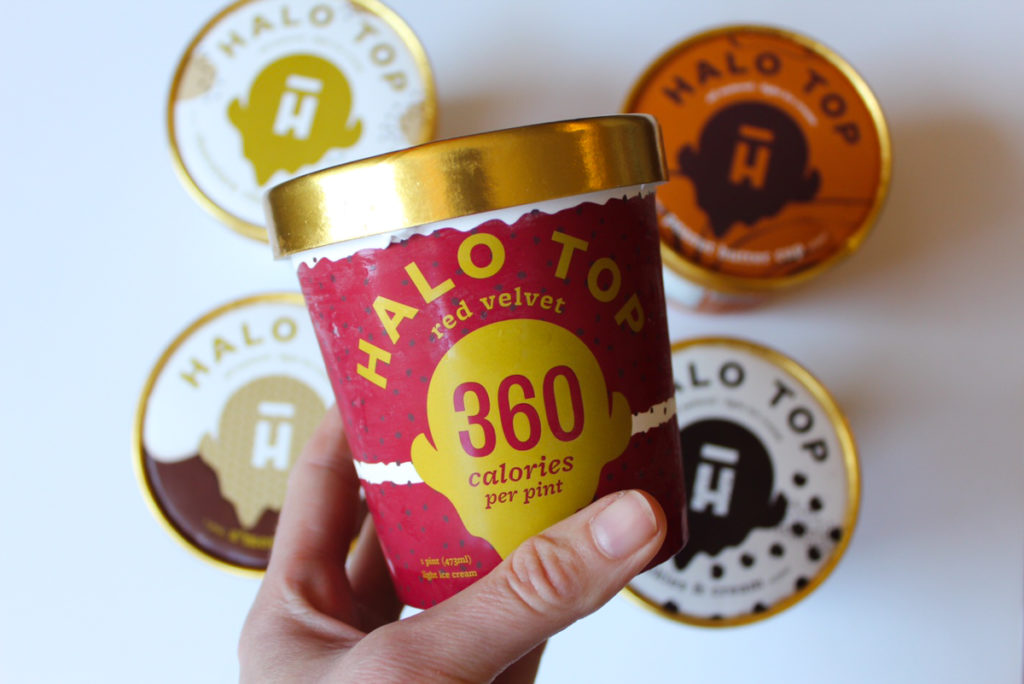 The Halo Top peeps sent me five pints to try, and I finished them in three weeks. Is that bad? I think that is reasonable. I also mixed some dates in there for an extra bite. Props to you Halo Top, for creating a tasty dessert that is lower in sugar than other ice creams and has extra protein too. If you compare the calories, carbs and fat of Halo Top with Ben & Jerry’s, well, Halo Top has a fourth of the calories and carbs. And while it’s not as decadent as a slice from The Cheesecake Factory, it certainly satisfies my sweet tooth, if that tells you anything.

Manduka yoga towel in my POPSUGAR Must Have Box

I’m embarrassed to say that I’ve been a practicing yogi for about three years and never had my own yoga towel until now. I tried using a beach towel over my mat, and it just doesn’t work. So I would sweat allover my mat, then scrub it down after each use. Not very convenient. Well leave it to my January POPSUGAR Must Have Box delivery* to take care of that. I got this blue Manduka eQua Mat Towel, and already tried it out at CorePower Yoga this past weekend. It totally stays in place and absorbs the sweat and dries quickly. It goes for $38, so it’s well priced too. I washed it up and am ready to use it again! Namaste! 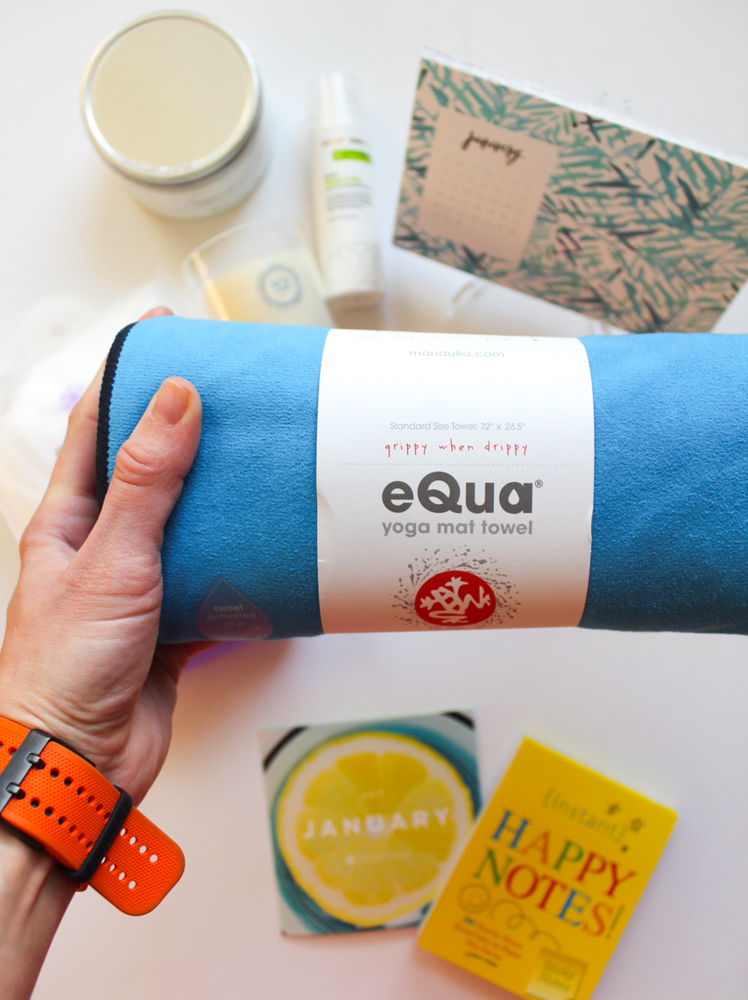 There were a couple of other items in this box that got me — the happy notes sticky pad by Sourcebooks Inc. is amazing and totally makes my day. As you guys know, I’m all about working on my gratitude these days, and a bright pick-me-up in the form of a sticky is a great way to get that going. (Gratefulness is not easy, but it does a world of good!)

You know I love these Must Have boxes, so head to the site if you want to get one for yourself. The other items — all of which would make great gifts to treat yo’self …

*Thanks to POPSUGAR for the complimentary box. And some of the links above are affiliate.

Best things from around the web to read

Oh and a little sneaky giveaway for you: Leave a comment on this post for a chance to win a $10 gift card to Jamba Juice. I’ll pick someone next week. I went this past weekend for a Greens ‘n Go smoothie after yoga, and it was delish. 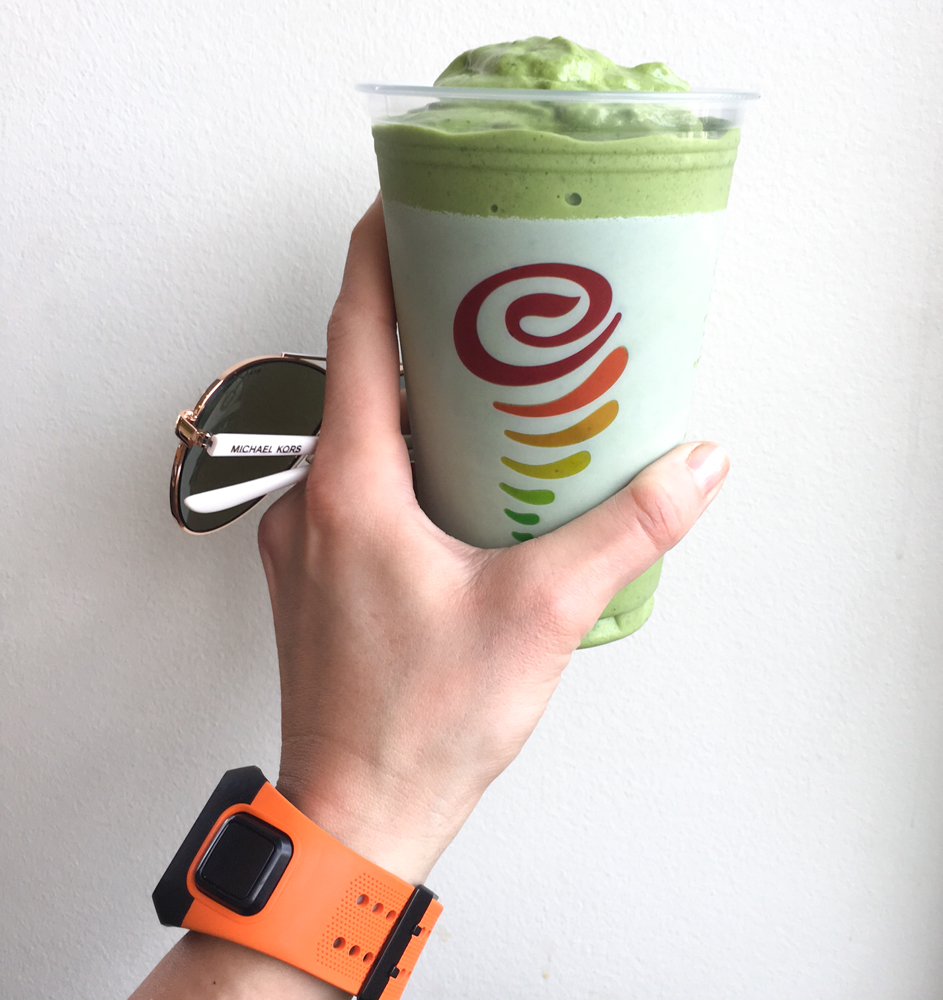 Have a wonderful day and weekend! And before you go, I’d like to note that there’s some rough stuff going on out there in the world/nation, so we each have do the best we can to get by. Be nice, be strong and keep on keepin’ on.

And by the way, I’m actively taking reader requests for the blog, so email me at aladygoeswest@gmail.com if there’s anything you want to see. I’m here for you, lovelies!

What’s something good going on in your life?