This weekend, I attended an incredibly memorable wedding in Boonville, California. In case you missed it, here’s a look at the first day of the trip.

For Dave and for me, it was a vacation weekend, far away from the hustle and bustle of the city. We thoroughly enjoyed soaking up the scenic locale Boonville has to offer.

On Saturday morning, we feasted on the complimentary breakfast at The Boonville Hotel, which included home-made granola, yogurt, tea, fresh apple juice and the most decadent and moist scones I’ve ever had. Not always into scones, I split one with Dave because we were told they were to-die-for. They sure were.

After a leisurely breakfast, we hopped in the car with Dave’s Dad and sister to tag along on a wedding errand to a nearby apple farm. The little operation we visited used an honor system for payment. So basically, you walk up, choose what you want and drop some cash in a box. That’s how they roll in Boonville.

We spent the rest of the morning lounging around the lobby, catching up with some family.

For lunch, Dave and I walked across the street from the hotel to the Boonville General Store.

The General Store is an adorable spot that sells fresh food, made-to-order sandwiches and salads and even local treats. 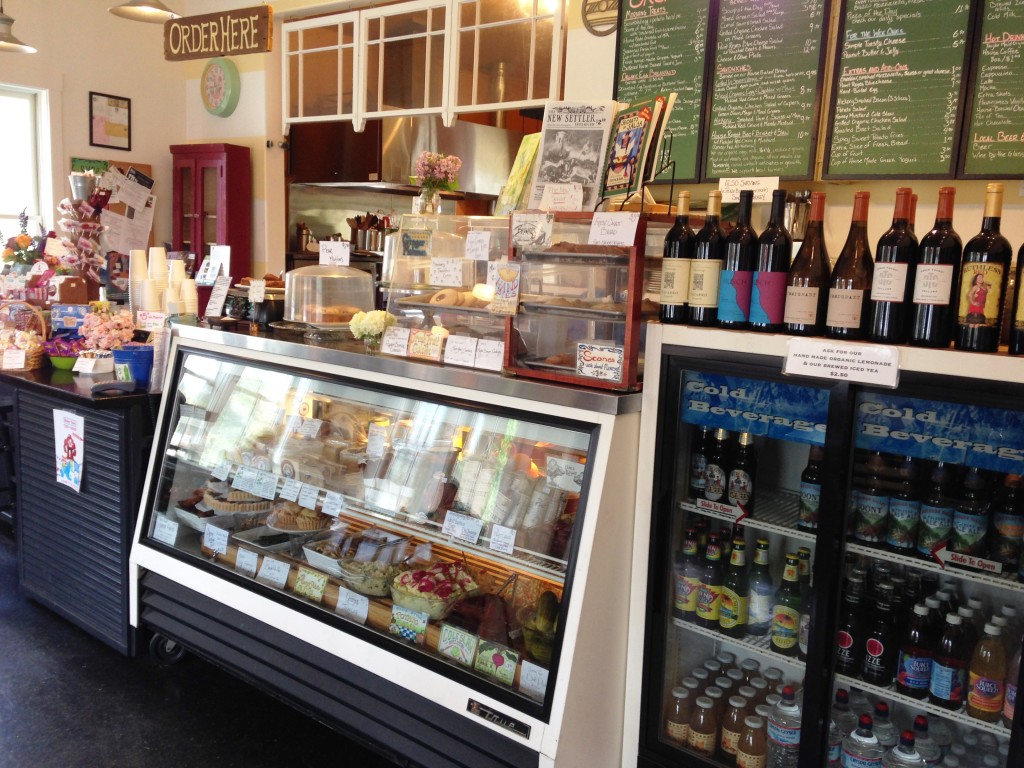 This is the same place that catered the rehearsal dinner the night before, and I was glad to see that much of what we already enjoyed was on the menu on the special’s board.

I had no problem ordering once I saw that and selected the salad plate of the day. The salad featured roasted beets, mixed greens, fruit, cole slaw, quinoa, pickles, grilled asparagus and thick and delicious honey wheat bread. It was colorful, healthy and tasty and filled me up. 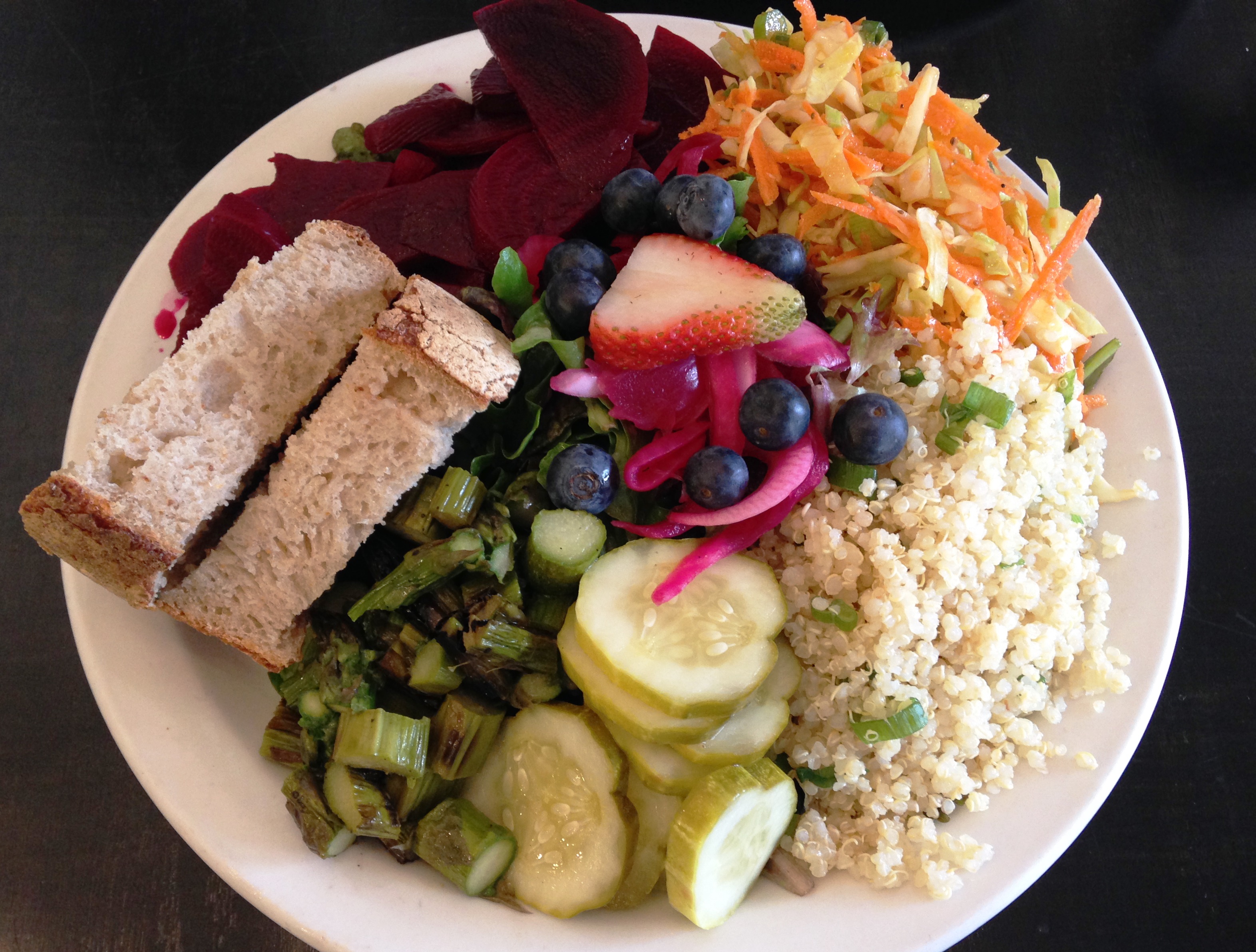 Dave ordered a calzone, which was plated with a little side salad. The dough was incredibly fresh and tasty, and he enjoyed every last bite of his selection too. 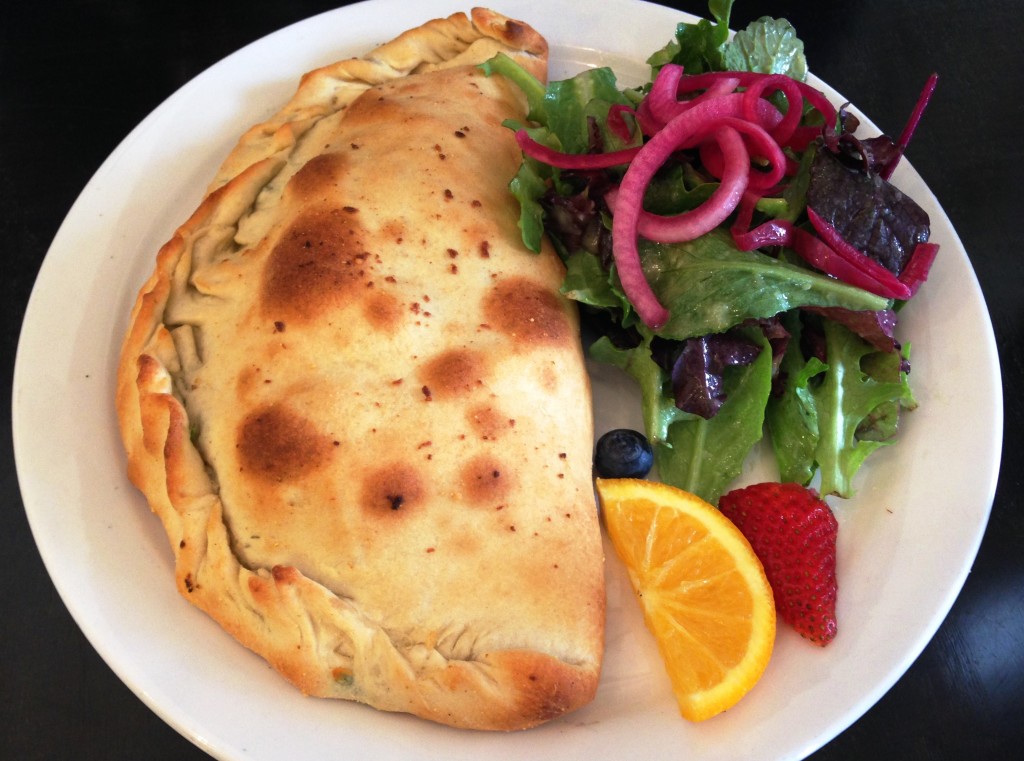 After lunch, we went back to the hotel to put on our wedding attire.

Because it had been raining recently, we were a little worried that the ground at the ceremony location outside would be muddy. And because it was chilly outside, we were told to dress for warmth and comfort. Therefore, this was an interesting set of criteria to devise an outfit.

I purchased some new cowboy boots for the occasion and threw those on with some classics from my closet I hadn’t worn in a while, with fingers crossed the boots wouldn’t get ruined. Here’s a pre-wedding shot, with the The Boonville Hotel as my backdrop. 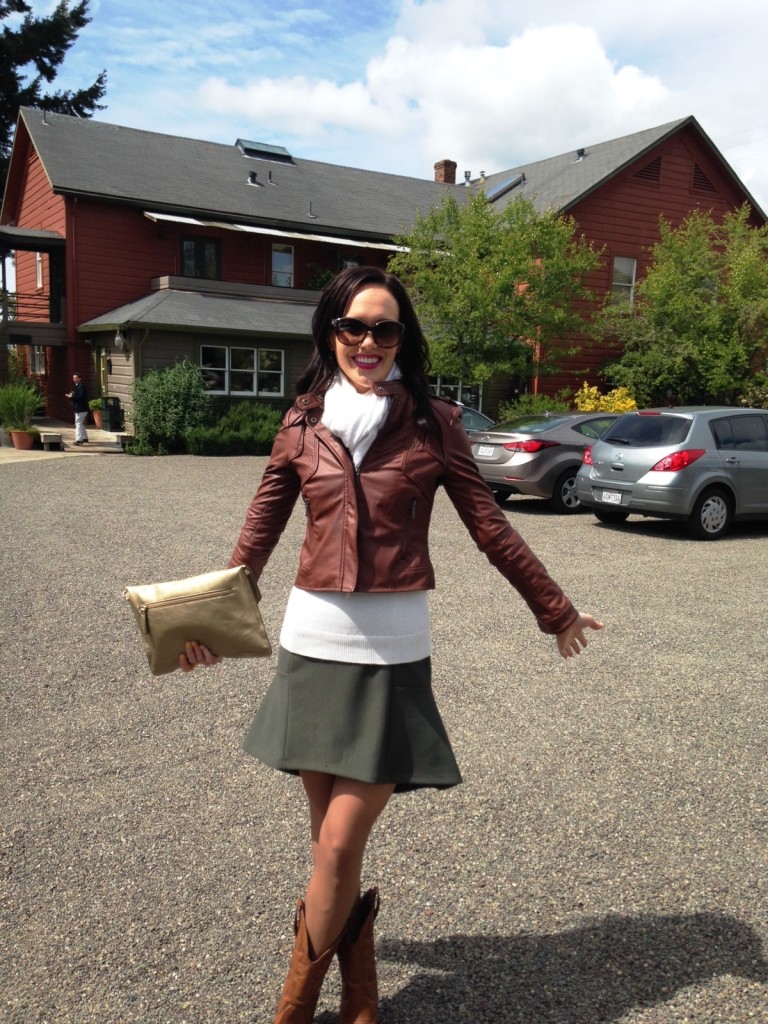 Yes, that’s a sweater over a dress. Because I needed it.

Even though the weather was terrible on Friday, on Saturday, the skies cleared and the sun even peeked out, just in time for the festivities.

The wedding ceremony took place at Hendy Woods State Park, a short drive from the hotel. Guests were asked to arrive 15 minutes early to enjoy a walk under the canopies of the redwoods before emerging into the open field, where the ceremony would take place.

We knew we arrived at the right spot, when we noticed one of several home-made signs on old wood cabinet doors letting us know we were heading to the wedding site, hosted by Mateal (Teal) and Emiko. These appeared throughout the trail, silently guiding our way. 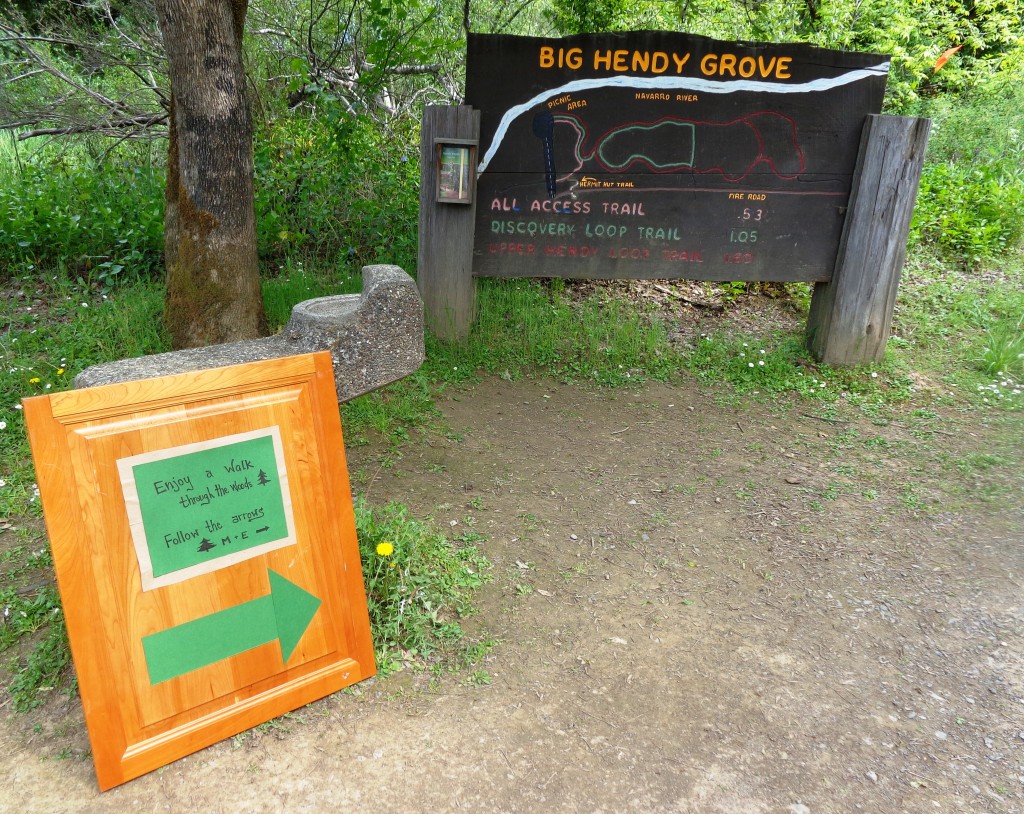 It was cool under the canopies, and we were in awe of the size of the redwood trees. Dave and I have explored redwoods in Northern California before, and this area had the same quiet, which just begs for silence as you walk and take it all in.

After about 10 minutes, we emerged from the trail and saw this picturesque view of the mountains. 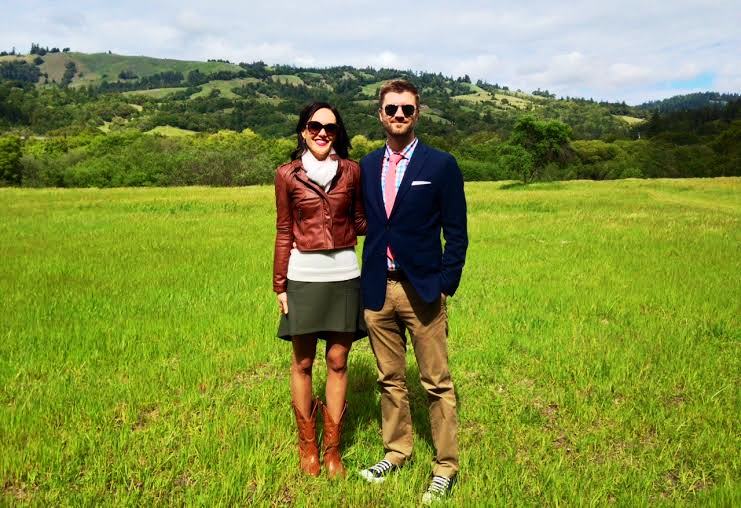 In addition to the view, we were welcomed to the official ceremony area by Emiko’s brother who directed us to a little table with small cups of calming tea for everyone to sip on before the service began. There was also a basket of stones, and guests were asked to write a blessing on a stone for the couple.

Dave and I were a little unsure of what to write on such a small canvas. Normally, I write long messages and drawn-out thoughts during this type of significant occasion, but instead I settled for something short and sweet — the word “Love” repeated. However, when I went to put our stones with the rest completed by other guests, I noticed most people had written a lot on theirs, even full sentences, and just done it in small handwriting. Whoops. I guess that was a total fail on our parts. Sorry, Mateal and Emiko for the poor stone performance by both Dave and by me.

Just a few minutes after arriving in the field, Dave’s Dad, the officiant of the wedding, asked us all to stand closely in a semi-circle around a large tree and table, which served as the altar. (Dave’s Dad also did our wedding and is an incredible speaker and pastor.)

Then, the magic began.

As a live string-duo played, the brides each walked in from opposite openings of the field, arm-in-arm with their parents. 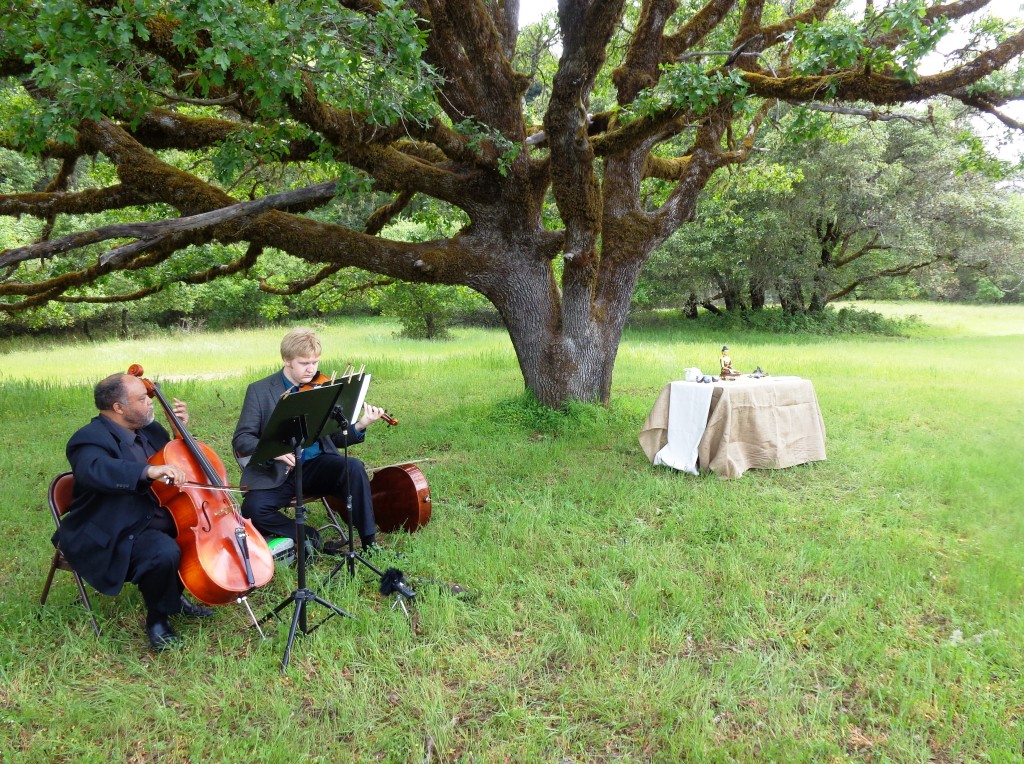 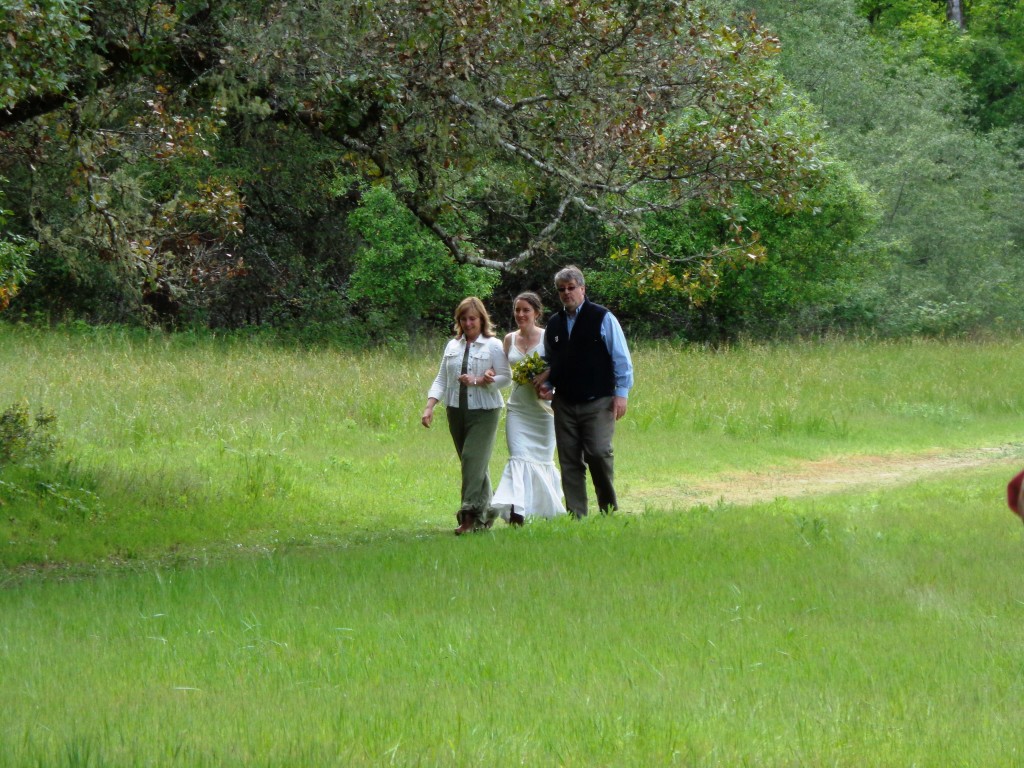 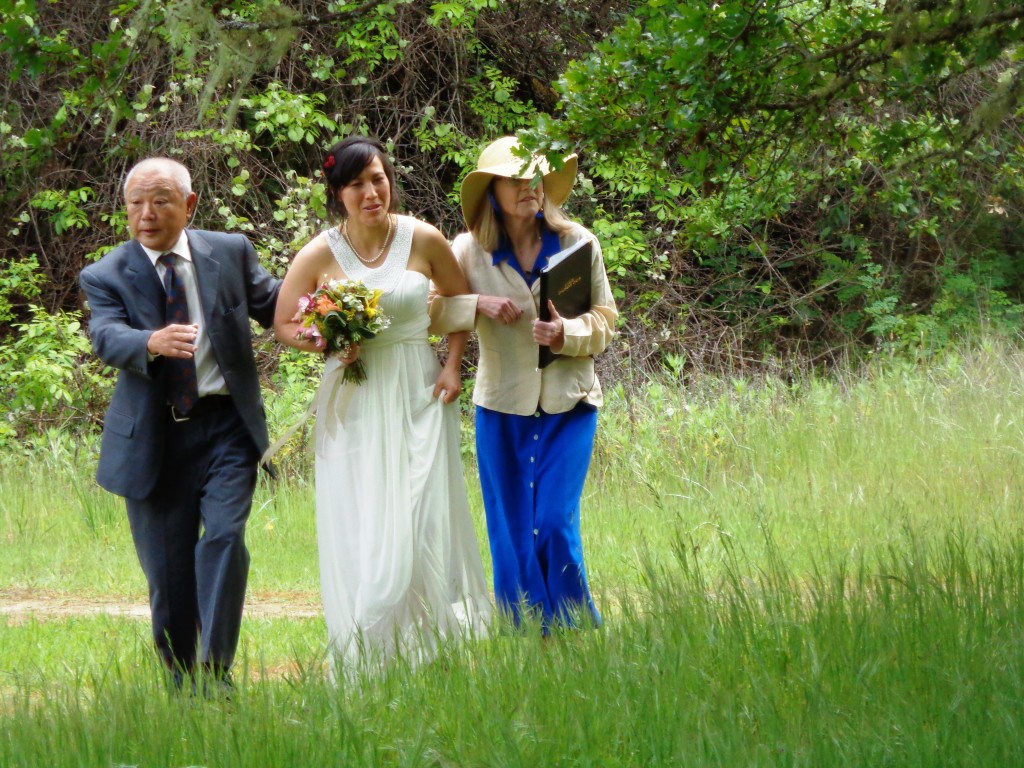 They caught eyes, continued walking and met in the middle in front of their standing friends and family, right under the tree. From there, Dave’s Dad took over, welcomed the group and lead everyone in a moment of silence for us each to pray according to our own faith. 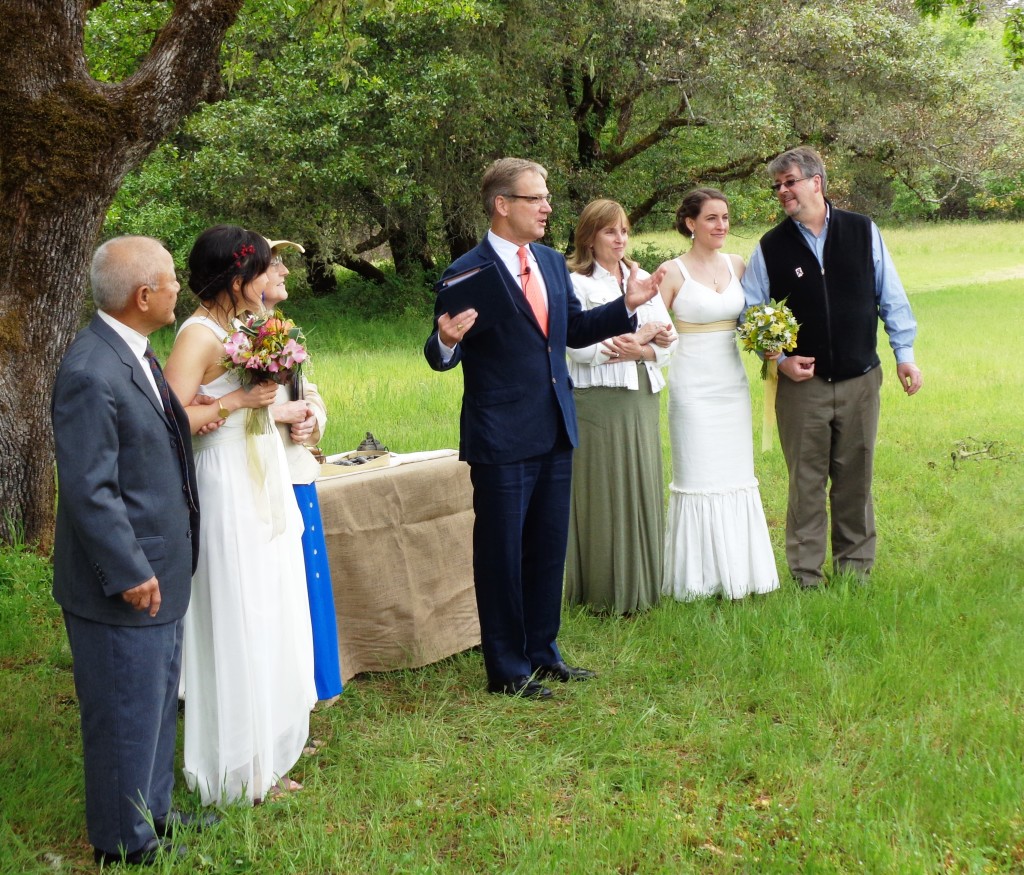 Mateal and Emiko had a very unique way to honor and include their parents in the service. Instead of a unity candle, which you often see at weddings these days, the couple had each set of their parents (one set for Emiko and two sets for Mateal) drink a ceremonial tea.

It was so different and just another unique touch by the couple, who clearly planned every single detail with great thought. 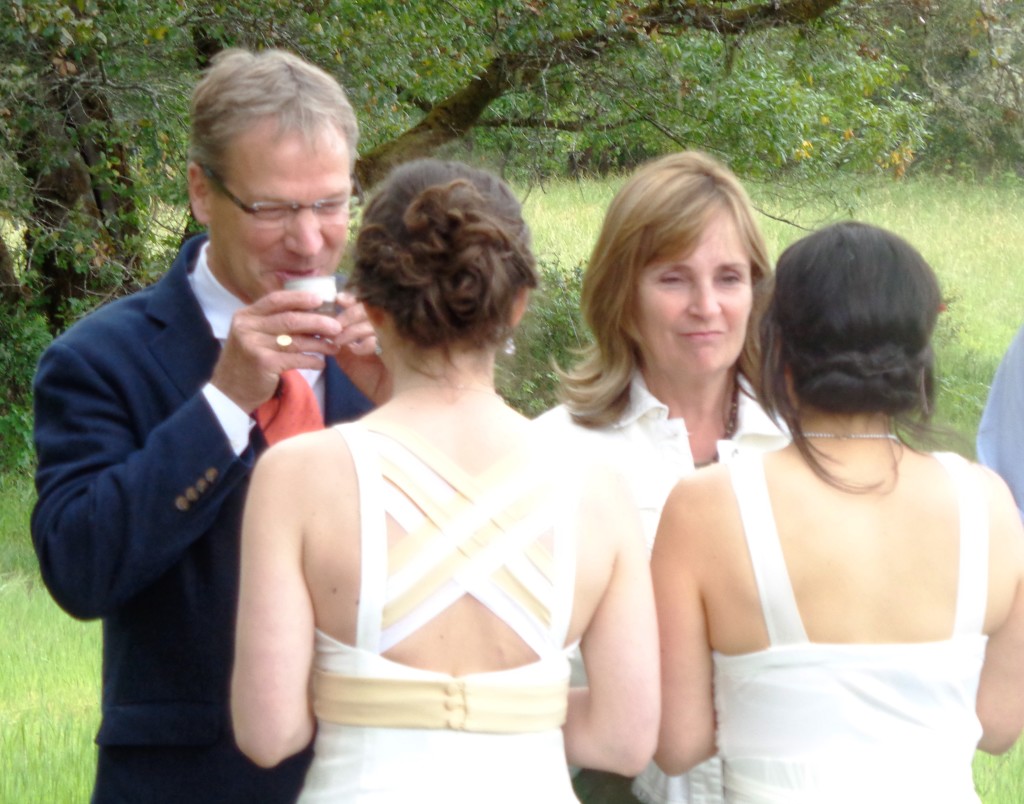 Their inclusiveness didn’t stop there. Mateal and Emiko also called up Dave’s sister Chrystn and her wife Louisa to be honored. Although Chrystn and Louisa have been happily married for nearly two years, they had a very small private ceremony and had never had the chance to be honored in front of the whole family. They didn’t expect this moment, and it was really moving. 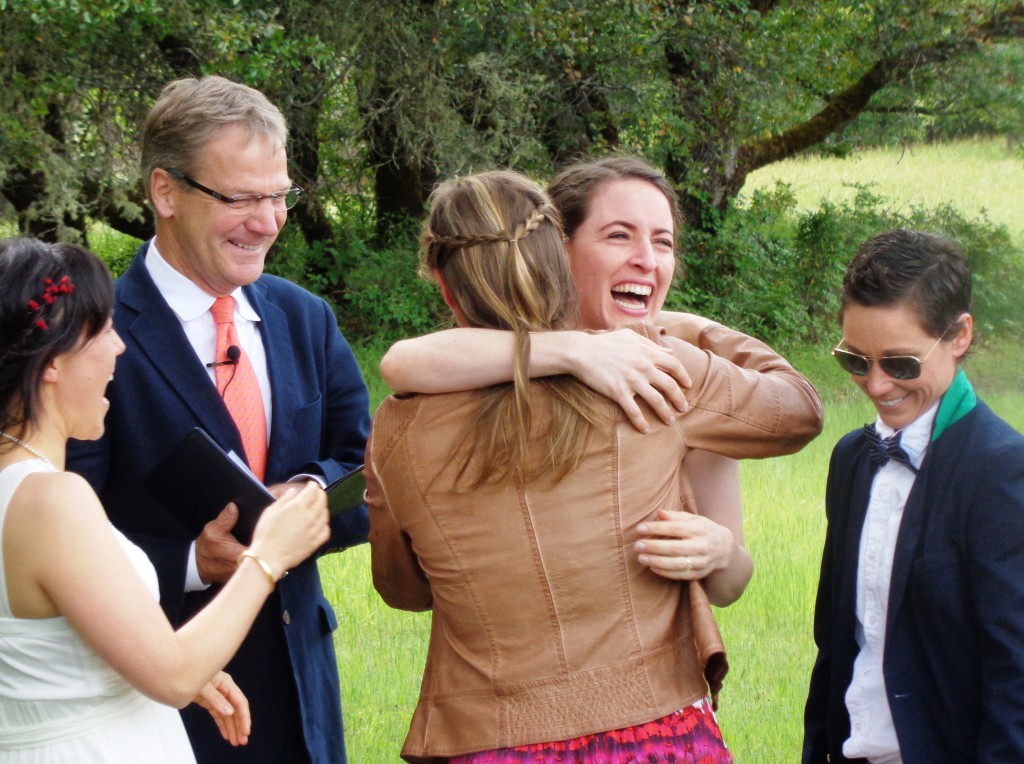 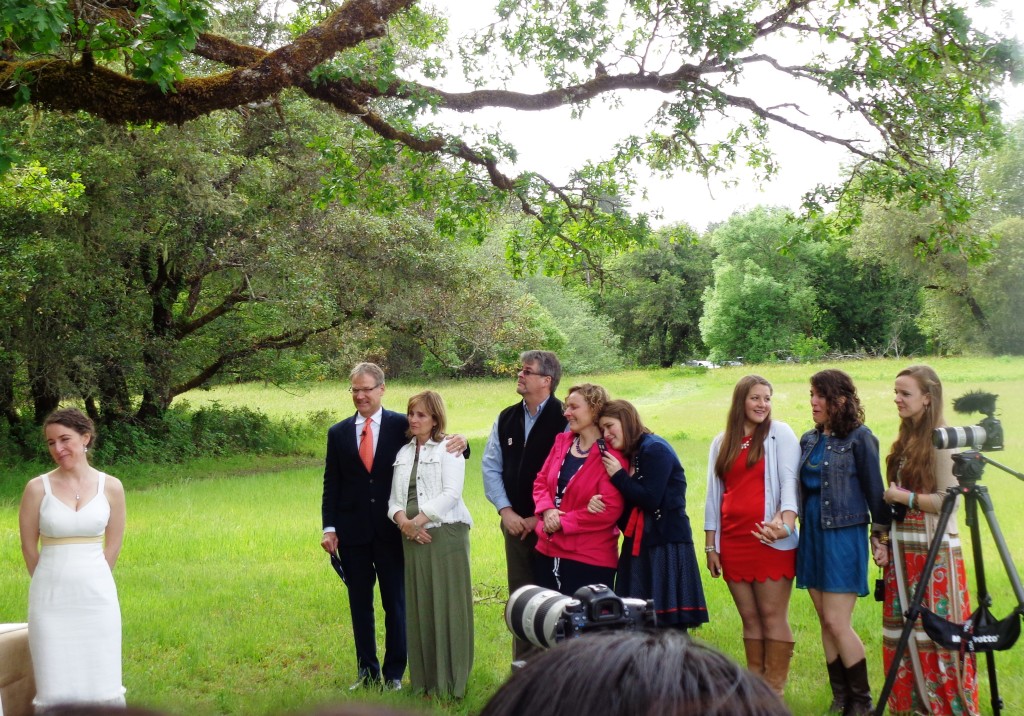 After that, Mateal and Emiko recited their own vows. Mateal spoke incredibly eloquently about her love for Emiko. Then Emiko’s vows came in the form of a song, which she wrote for Mateal and played on her guitar, surprising everyone, who didn’t know she had someone stash her guitar under the altar table.

Her voice is angelic, and the entire 40-50 wedding attendees were just mesmerized by this moment, as was her bride. 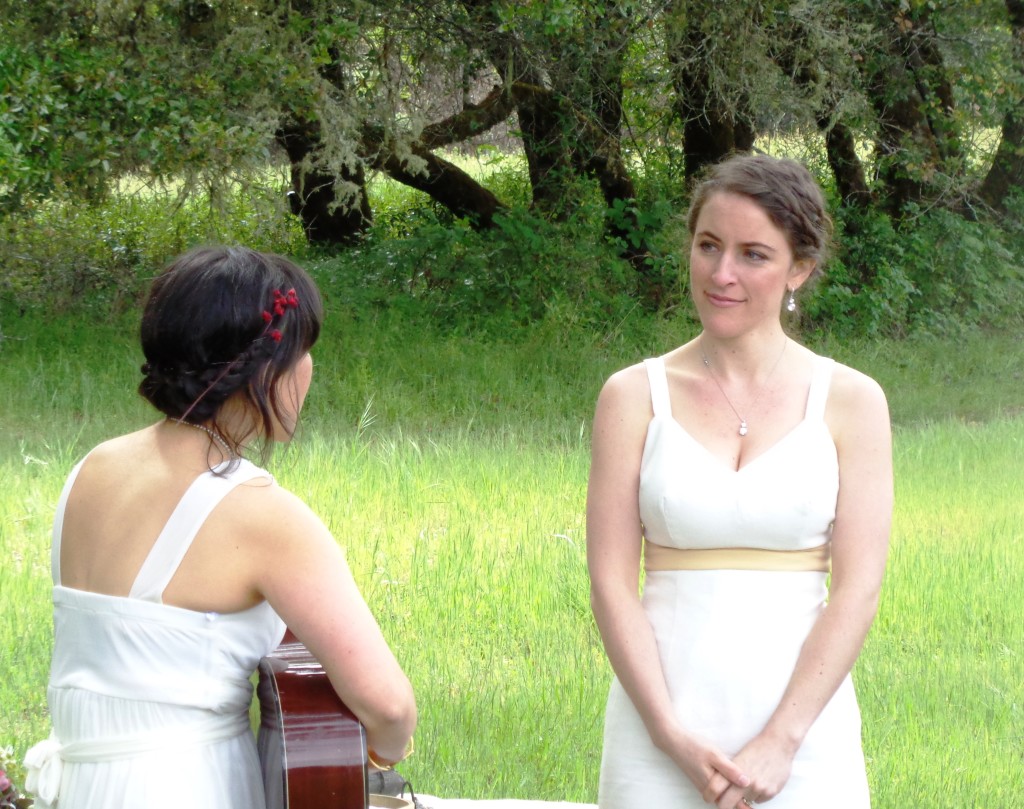 Then came the rings, carried by an adorable ring-bearer. 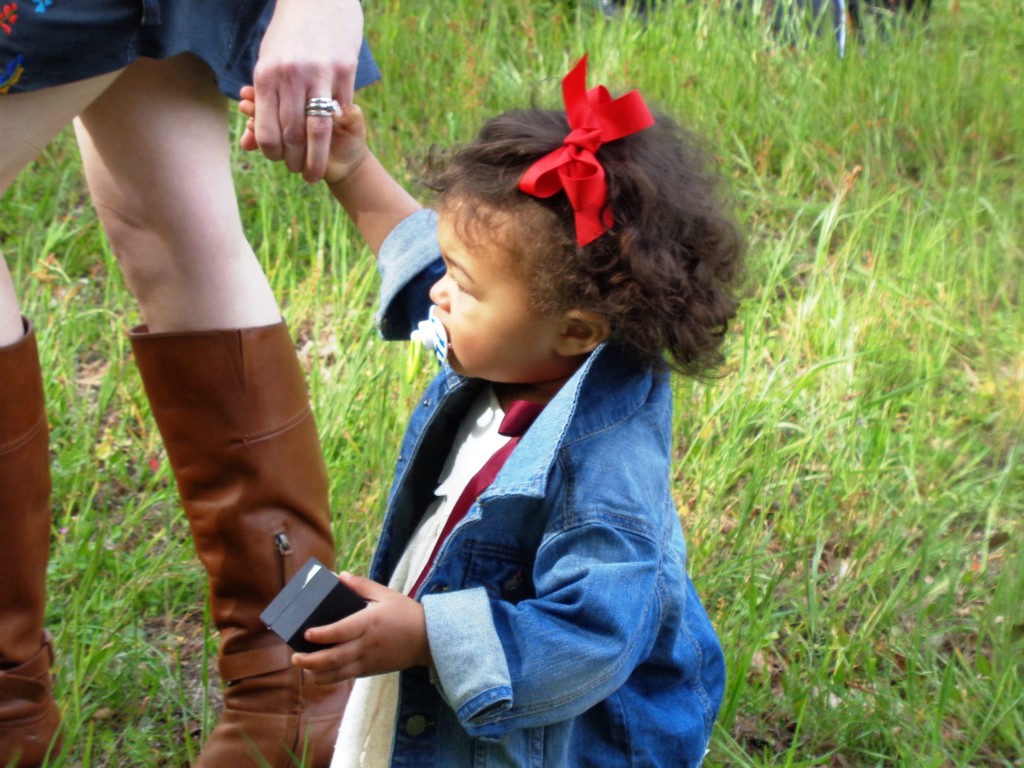 Within 20 minutes, Mateal and Emiko were declared partners for life, and we all clapped and congratulated them.

It was pretty cold outside, so other than a taking few pictures, most attendees scurried off to their cars to get back to the hotel. 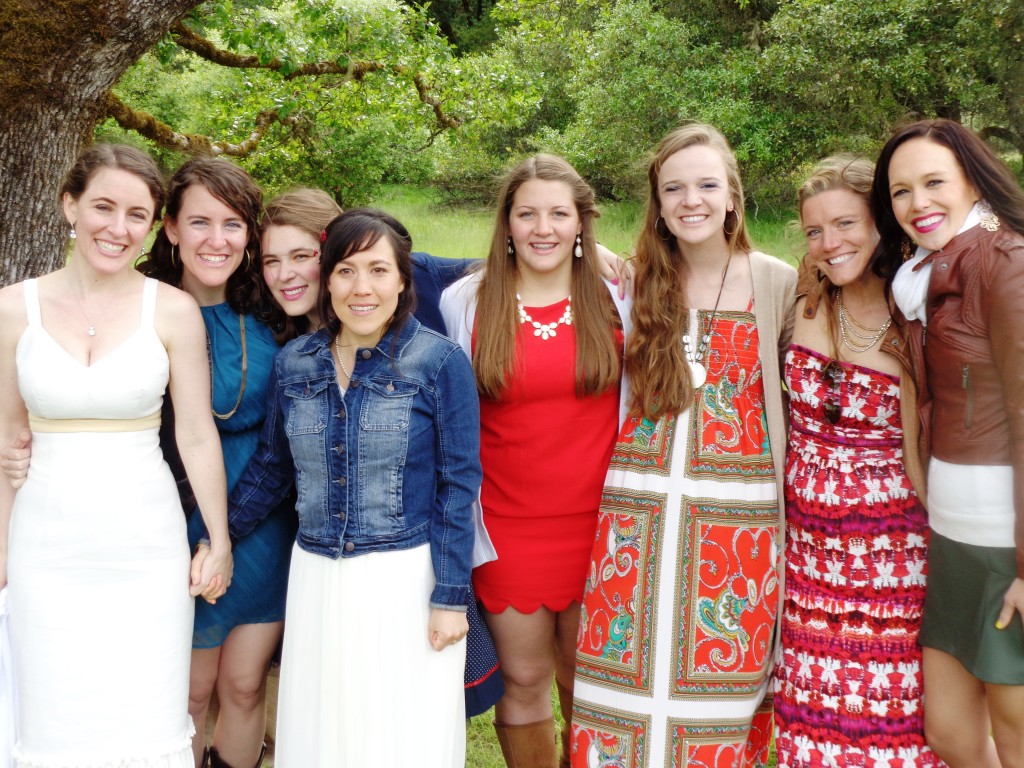 Reception at The Boonville Hotel

Cocktail hour was held outside on the patio of The Boonville Hotel. We could choose from local beer or wine and a handful of passed tasty vegetarian appetizers.

I had some white wine, while loving the rustic look of the surroundings. 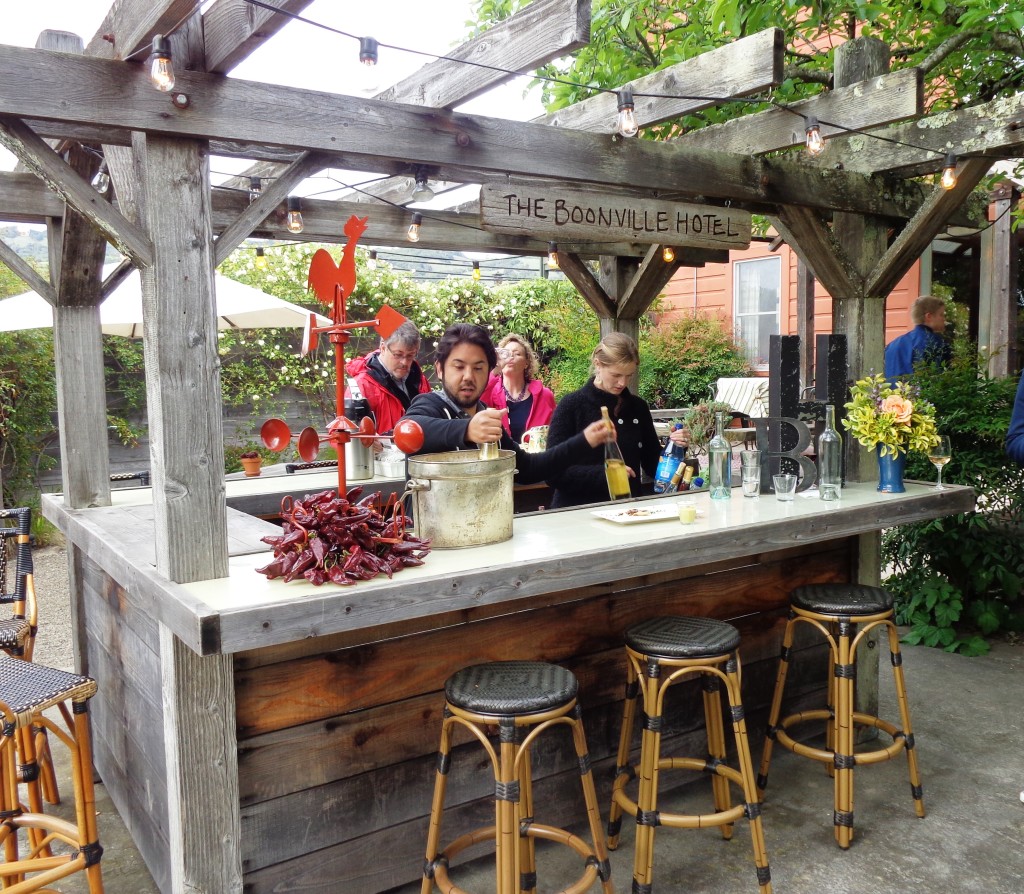 Chrystn and I spotted the wedding cake immediately and had no choice but to pose for this picture. 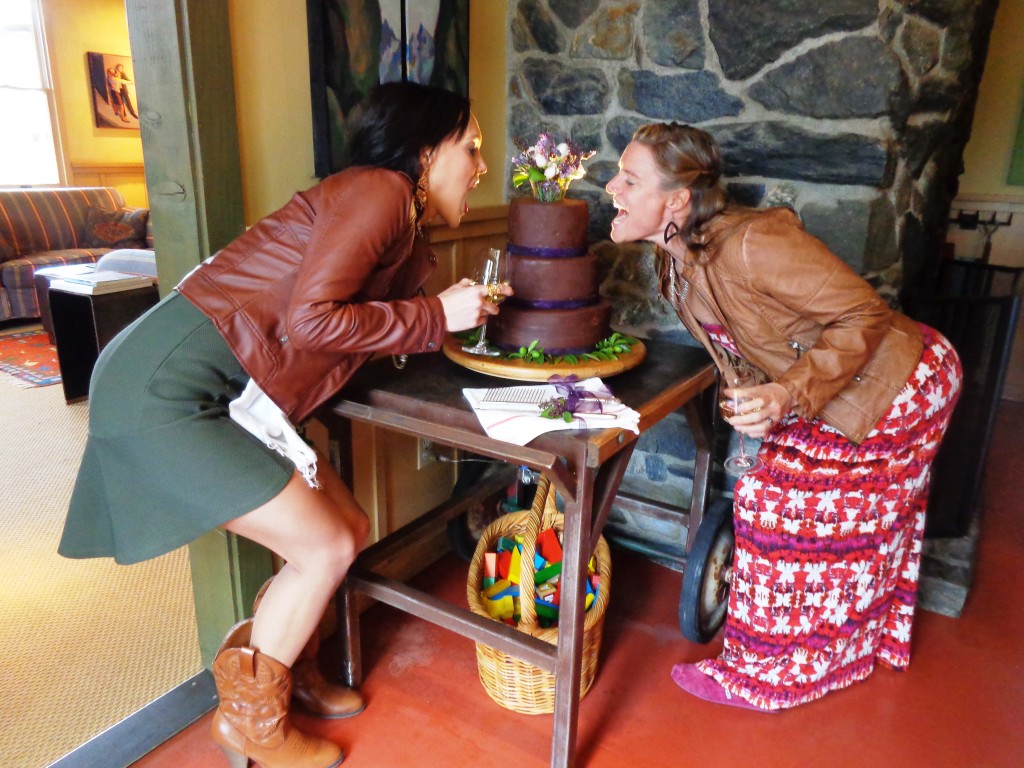 The cake was made by Mateal’s friends, and it was chocolate ganache with walnut and all sorts of wonderfulness. It tasted just as good as it looked. 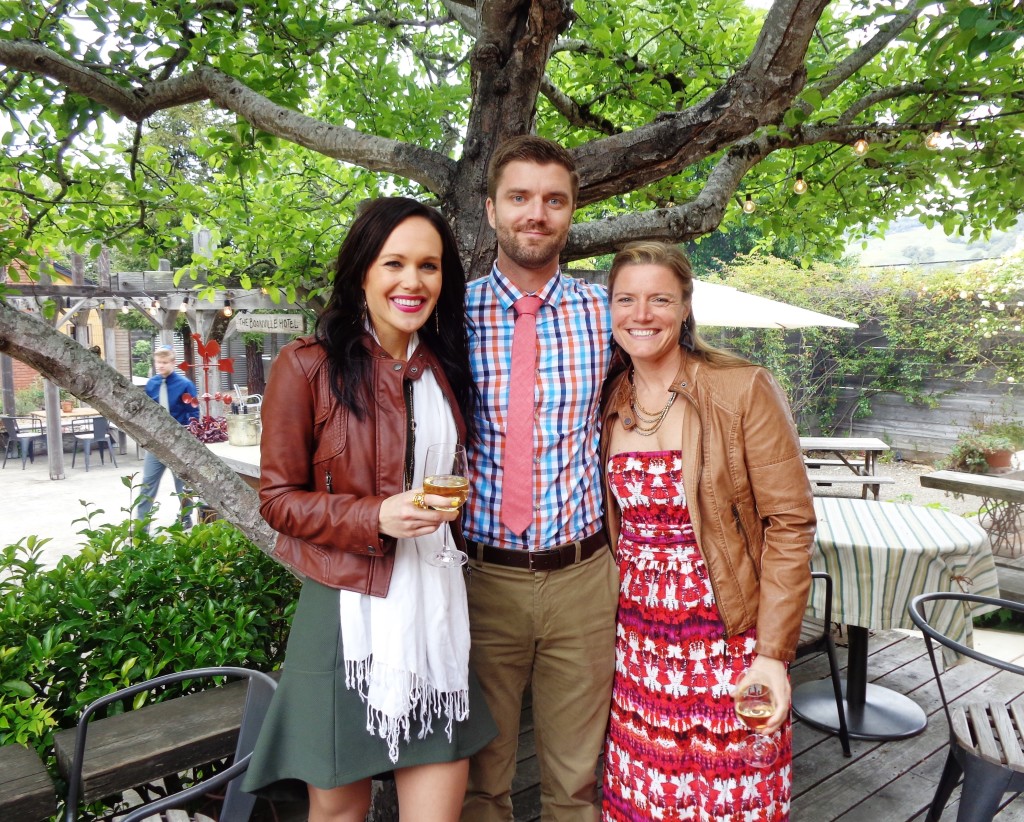 It was really cold during cocktail hour, so I actually went ahead and borrowed one of the afghans to wrap around my legs while outside. But I did manage to put it aside for a couple of pictures that would show my new boots. 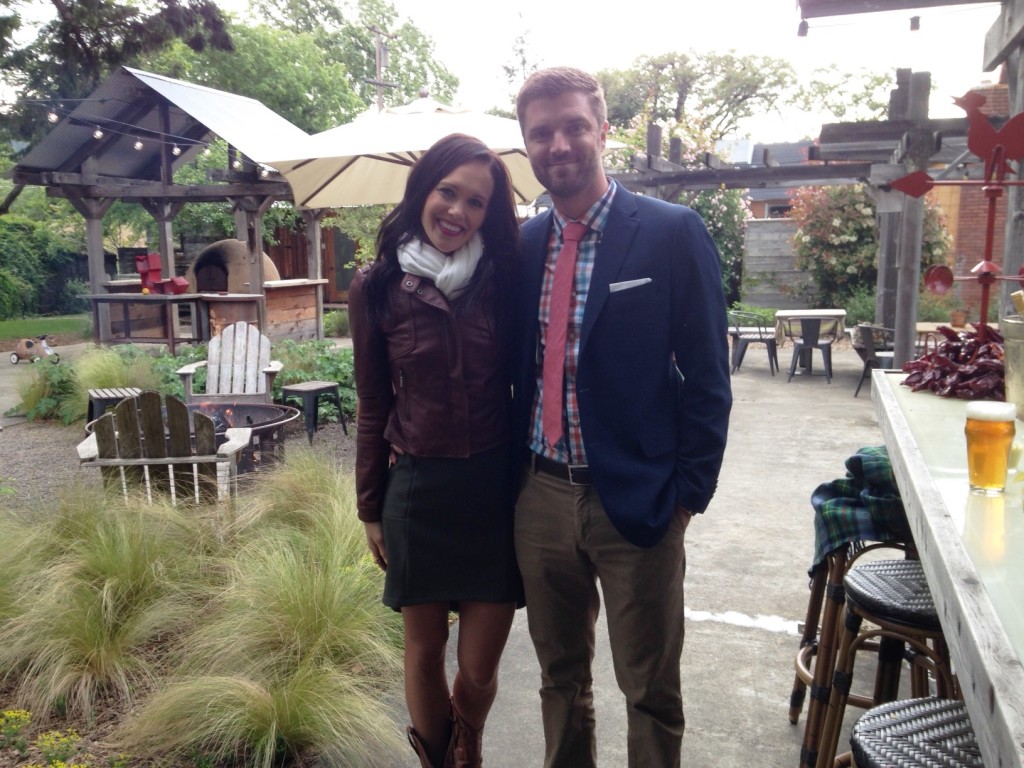 After about an hour, we were called into dinner in the hotel’s dining area.

The menu at each place-setting let us know of the courses ahead. We also learned from the menu that nearly every single thing we would be eating was sourced from within 100 miles of the hotel, and who doesn’t appreciate that. 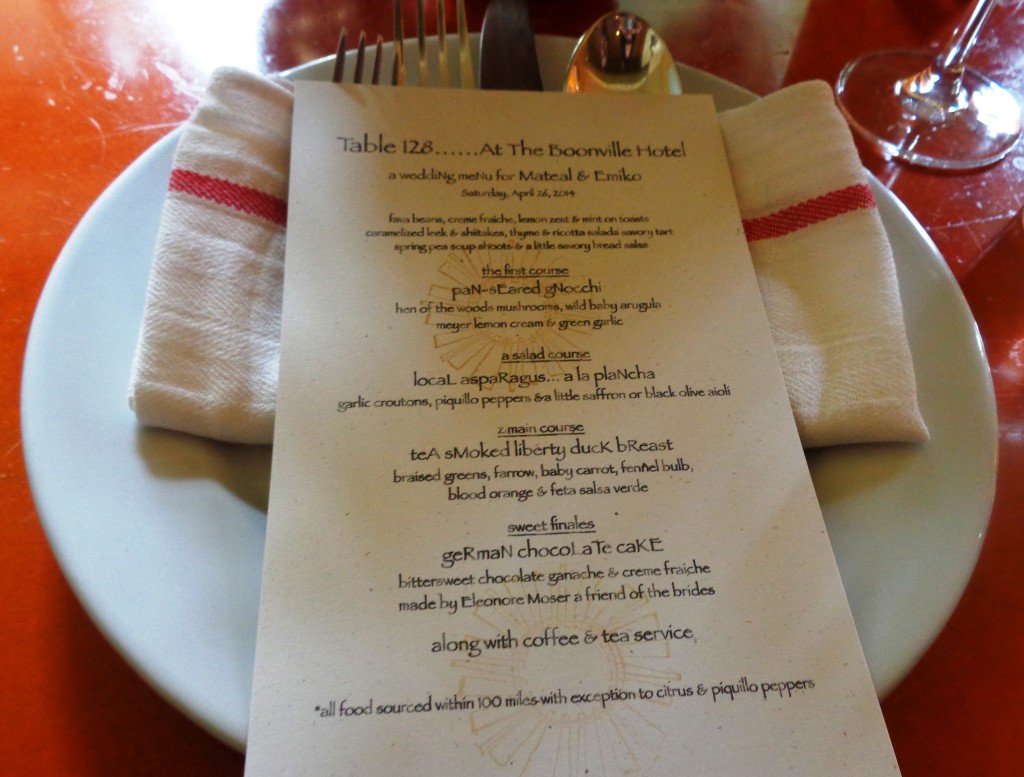 The first course was gnocchi. 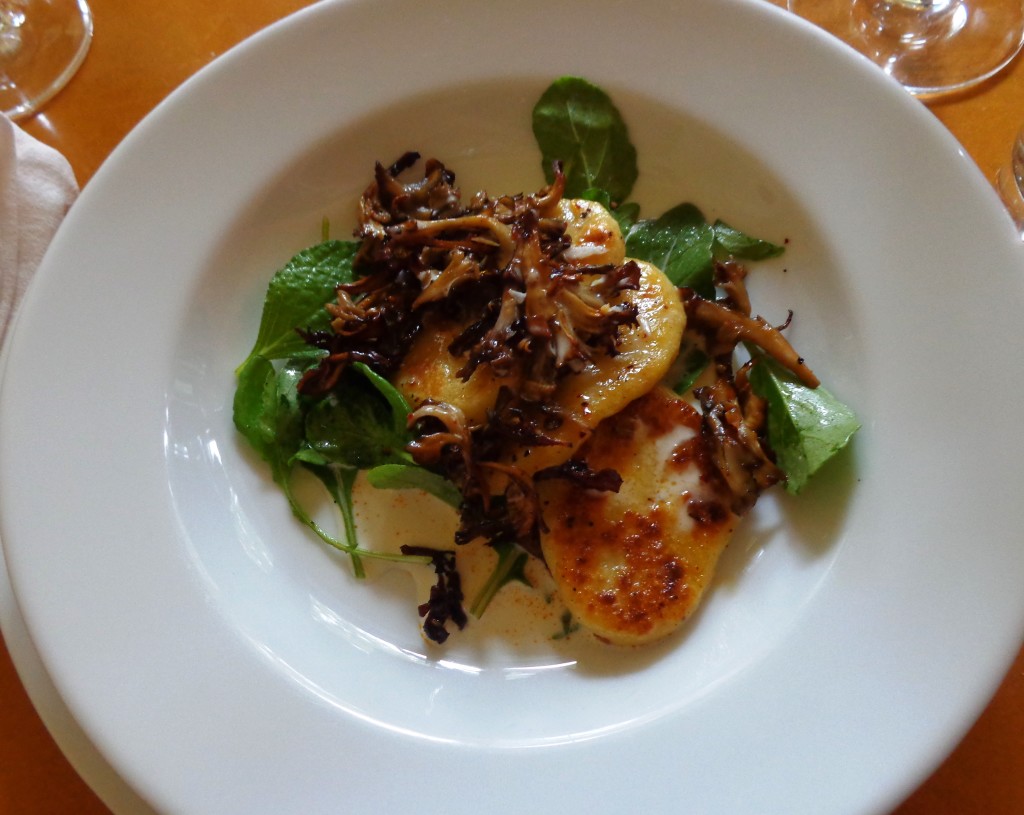 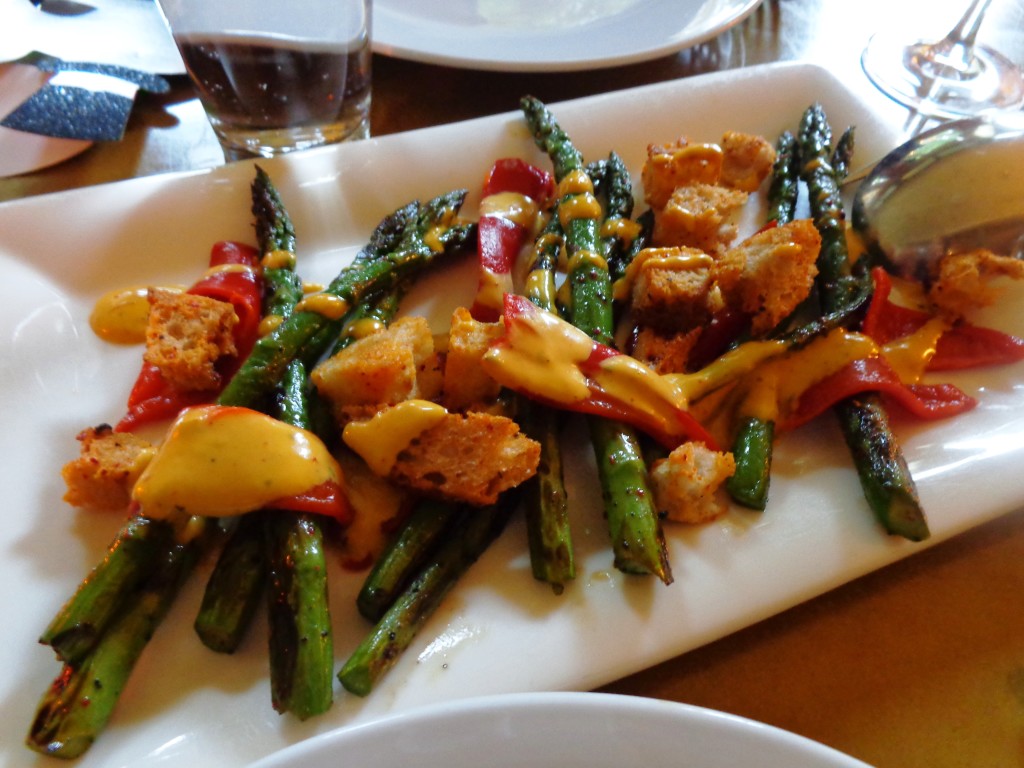 The second the duck platter was put on our table we dug in, so I didn’t even bother getting a picture of that dish. But it was even better than the first two delicious plates — not an easy feat.

I’ve said it already, but Boonville sure provides some good eats. Every bite throughout the weekend was superb.

During dinner, both Emiko and Mateal’s parents and siblings gave speeches and so did one of Emiko’s friends. They were all great speakers and each offered some insights into their relationships with the happy couple, as well as shared some good wishes.

Square dancing under the stars

After a filling and tasty dinner, it was time for dancing.

Emiko and Mateal hired a live contra-dance band with a caller to lead the group in some square dancing. Nearly everyone participated on the patio and learned to do a few dances. It was such a great experience under the Boonville moonlight.

However, the dancing wasn’t that easy and was pretty fast-paced. In fact, the caller seemed to choose the intermediate-level for our group, which proved challenging.

Nonetheless, we do-see-doed, see-sawed, squared-up in fours, swung our partners round-and-round and peeled-the-banana with the best of them. Even if we all felt a little behind the entire time.

We finished the night with a cake-cutting and some more dancing to modern music, in which Dave’s little sister Gwena unofficially took a few of us through some Zumba. So fun.

It was such an intimate, casual and laid-back wedding weekend, full of love and full of happiness. I couldn’t have pictured anything more perfect for those two.

They are off on a honeymoon to New Zealand this week, and the rest of us are still smiling from the weekend that they allowed us to be a part of.

Much love to the happy couple!

Dave and I had to wake up early on Sunday and miss the family brunch, to drive back to San Francisco for a Warriors playoff game.

Now, it’s back to reality, with some exciting changes coming up for me during the new month.

And with that, my recap is complete. Be sure to check out Friday’s events as well.

Have you ever square danced at a wedding? How was your weekend?