I learned a thing or two during my first ever camping trip in California this weekend.

And now, let’s look at how I came to these conclusions.

Arriving to camp at night

On Friday evening, after I taught BODYPUMP, Dave and I headed south to Big Basin Redwoods State Park, said to be the oldest State Park in California. While it was only about 65 miles from San Francisco, the narrow and curvy mountain roads took a long time to climb via car, and it ended up being a two-hour trip door-to-door to get to our destination.

We arrived in the cold, dark night, checked in at the park ranger’s office just before it closed and pulled up into our camping parking spot at the Blooms Creek Campground around 9:45 p.m.

We were the last of the group of 16 to arrive to the campsite, but were welcomed with open arms. In fact, a couple of the guys jumped in with their lanterns to help Dave get our tent set up in no time. Within 20 minutes of arriving, we were already sitting around the campfire with everyone else, cold beverage in-hand.

The group was there to celebrate a birthday and to get away from the hustle and bustle of the city. Dave and I had met about half of the attendees before, and everyone hailed from San Francisco, with one from San Jose. It was the perfect laid-back group of people to spend the weekend with, including a fellow Florida Gator in the crowd.

Even though we got there late, I’m still glad we made the effort to be there the first night and settle in. After a little chatting, the group dispersed around midnight, and we retired to our tent.

Tent sleeping in the woods

I was a little anxious about the sleeping situation out in the wilderness in a tent. It wasn’t terrible, but it wasn’t exactly good either. While the part about being outside didn’t really bother me, it was the comfort level of our gear that really did us in.

Although Dave and I had sleeping bags and sleeping bag pads, it felt like we were sleeping on a hardwood floor. I had no problem falling sleep, but when I woke up I was seriously sore and uncomfortable. I tossed and turned in my tightly-zipped-up sleeping bag, trying to find a comfortable way to lay throughout the night. I probably got about six hours of sleep, which just isn’t quite enough for me. (For reference, note my discussion on the importance of sleep.)

We found out the next morning that most of the group, many of whom are camping pros, had brought air mattresses to sleep on in their tents.

Dave had even suggested ahead of time that we rent a larger tent and bring our air mattress, but I told him I didn’t think we should. Whoopsie.

I think our tent was pretty cute. Here’s a look at our set-up. 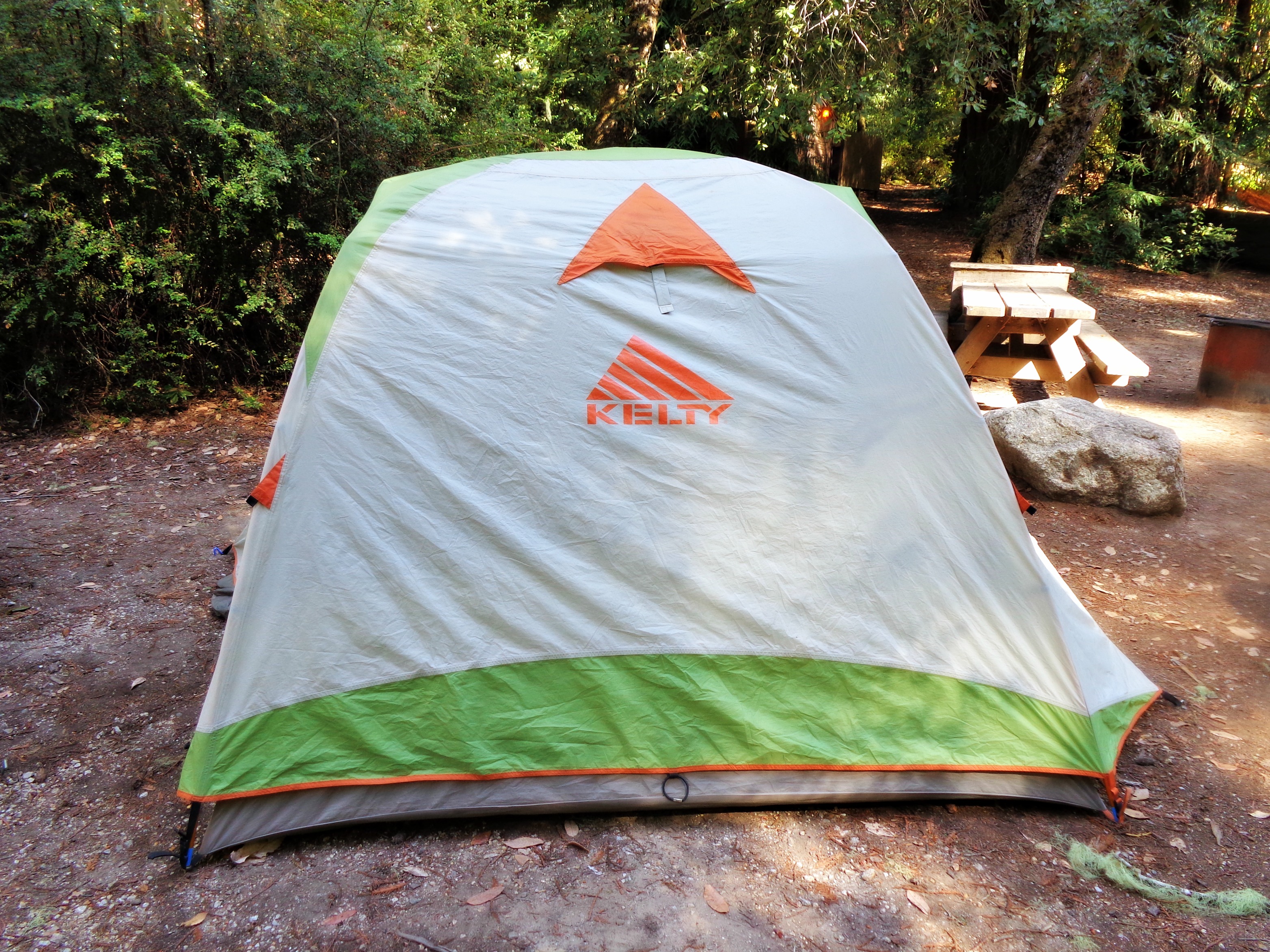 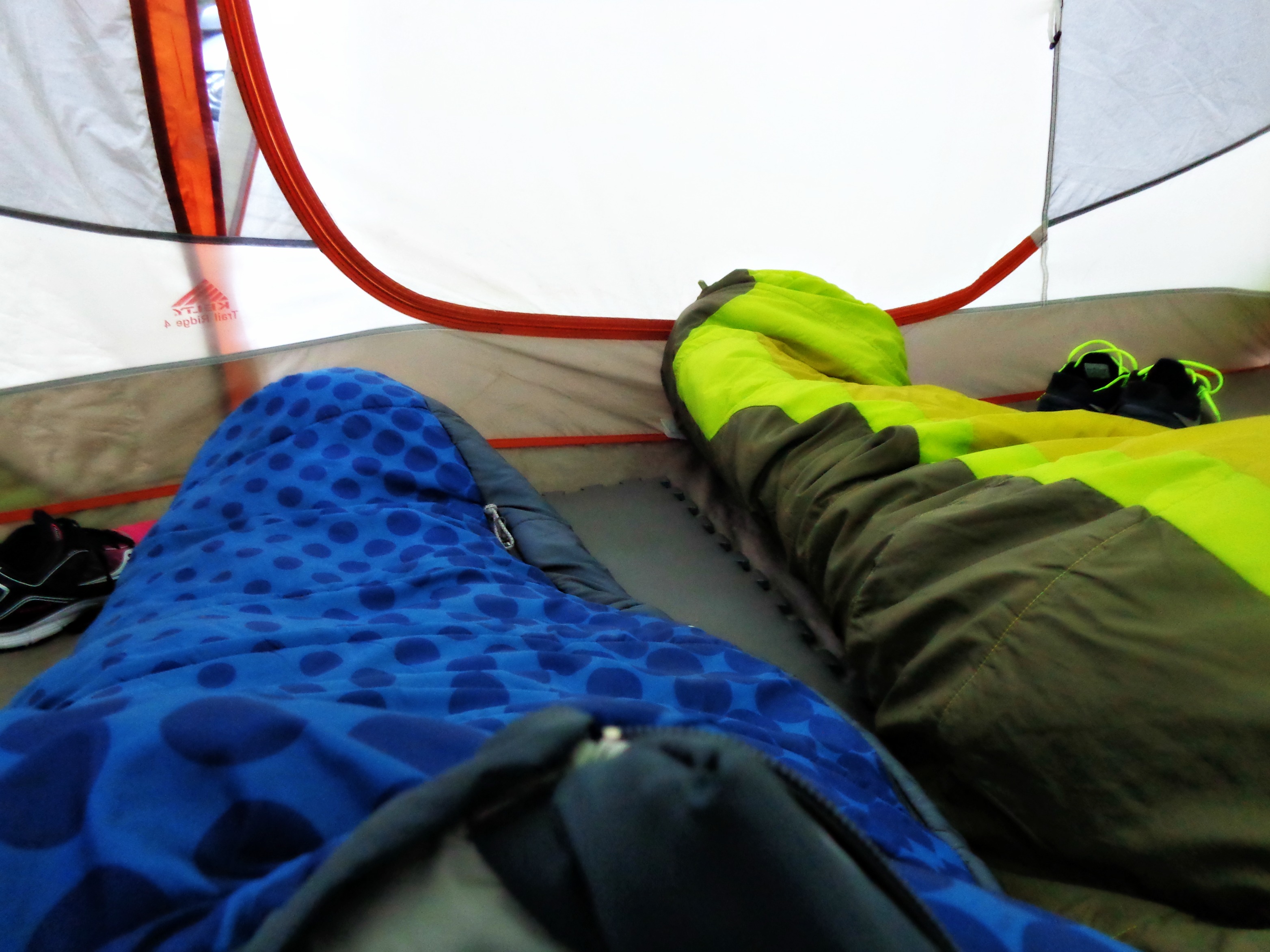 Even though we weren’t super comfortable, the location of our tent was perfect. That’s because our reserved spot was right behind our car, which meant we kept all of our food and gear safely stowed away, but within close reach.

This is how it’s done in Blooms Creek Campground. As a tent-only area, individual parking spots are assigned near each site. It’s a super easy way to camp, because you can drive right up to where you stay.

We were also very close to these restrooms. 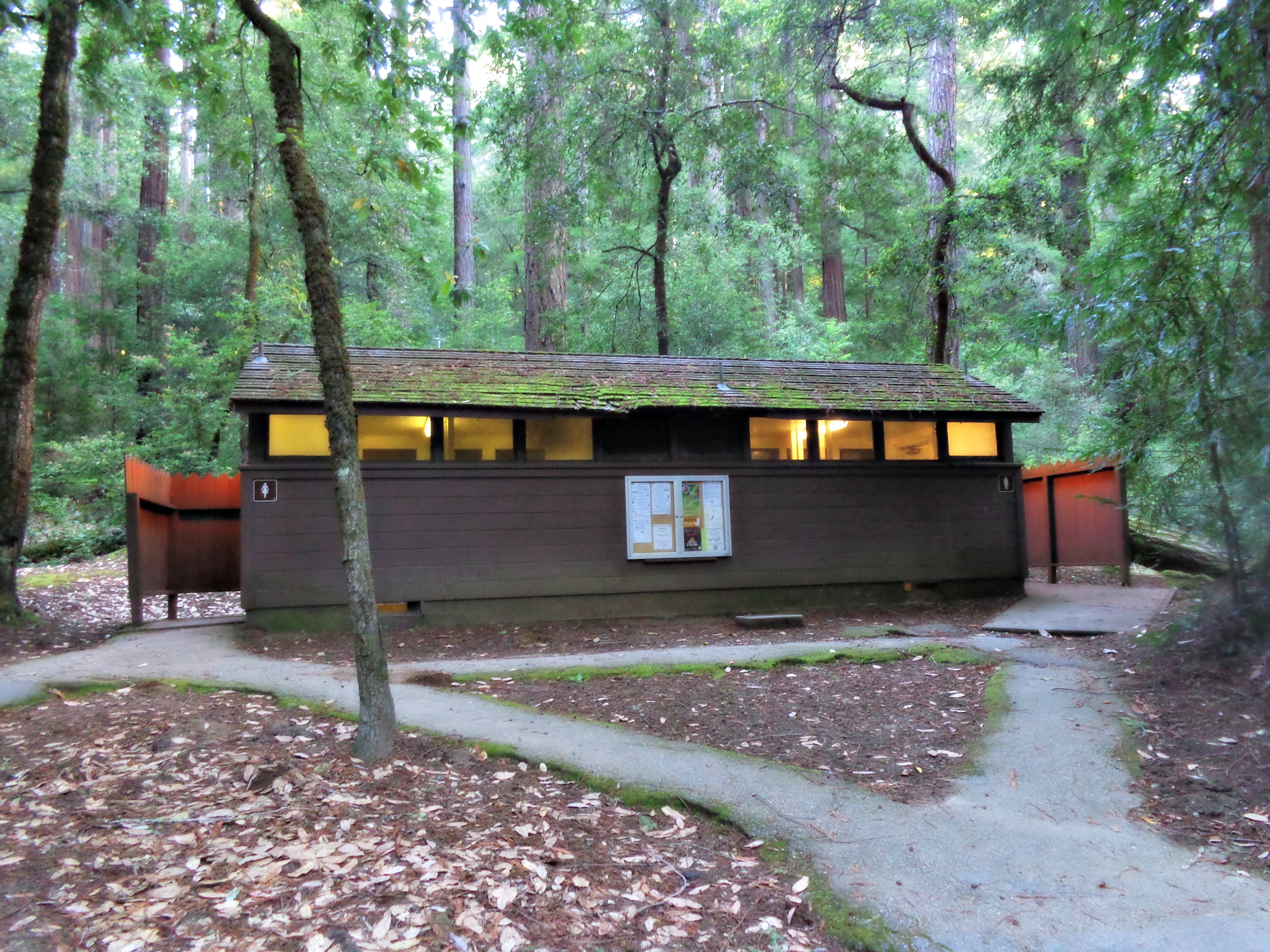 On Saturday morning, everyone woke up slowly and emerged from their tents to meet back at the campfire for breakfast.

Here’s a happy camper, if I’ve ever seen one. 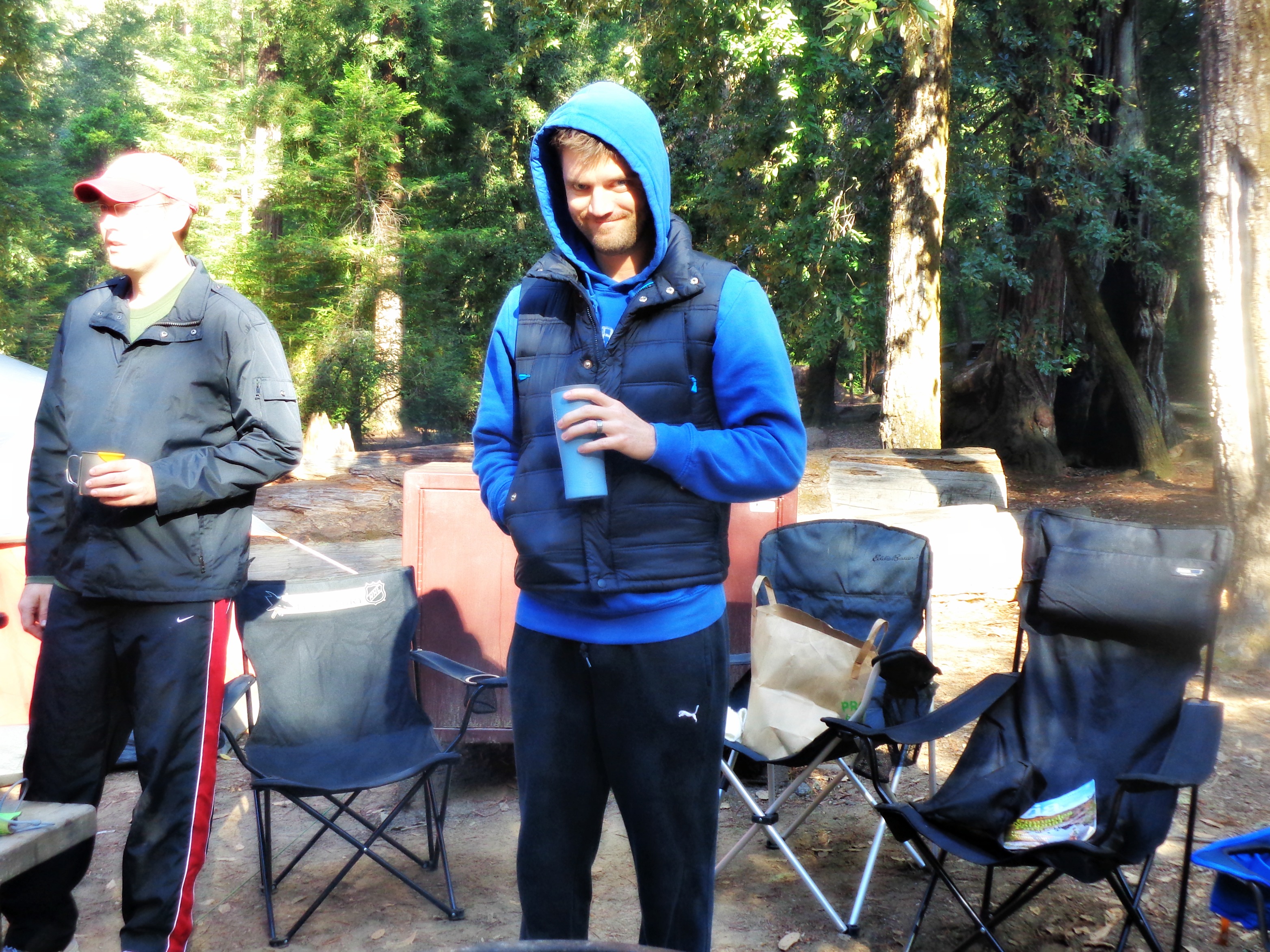 When you’re camping and cooking on burners and over a fire, it takes a long time to prepare meals. It was nearly a two-hour production to get the coffee, tea, bacon, eggs, potatoes, etc. ready for consumption. 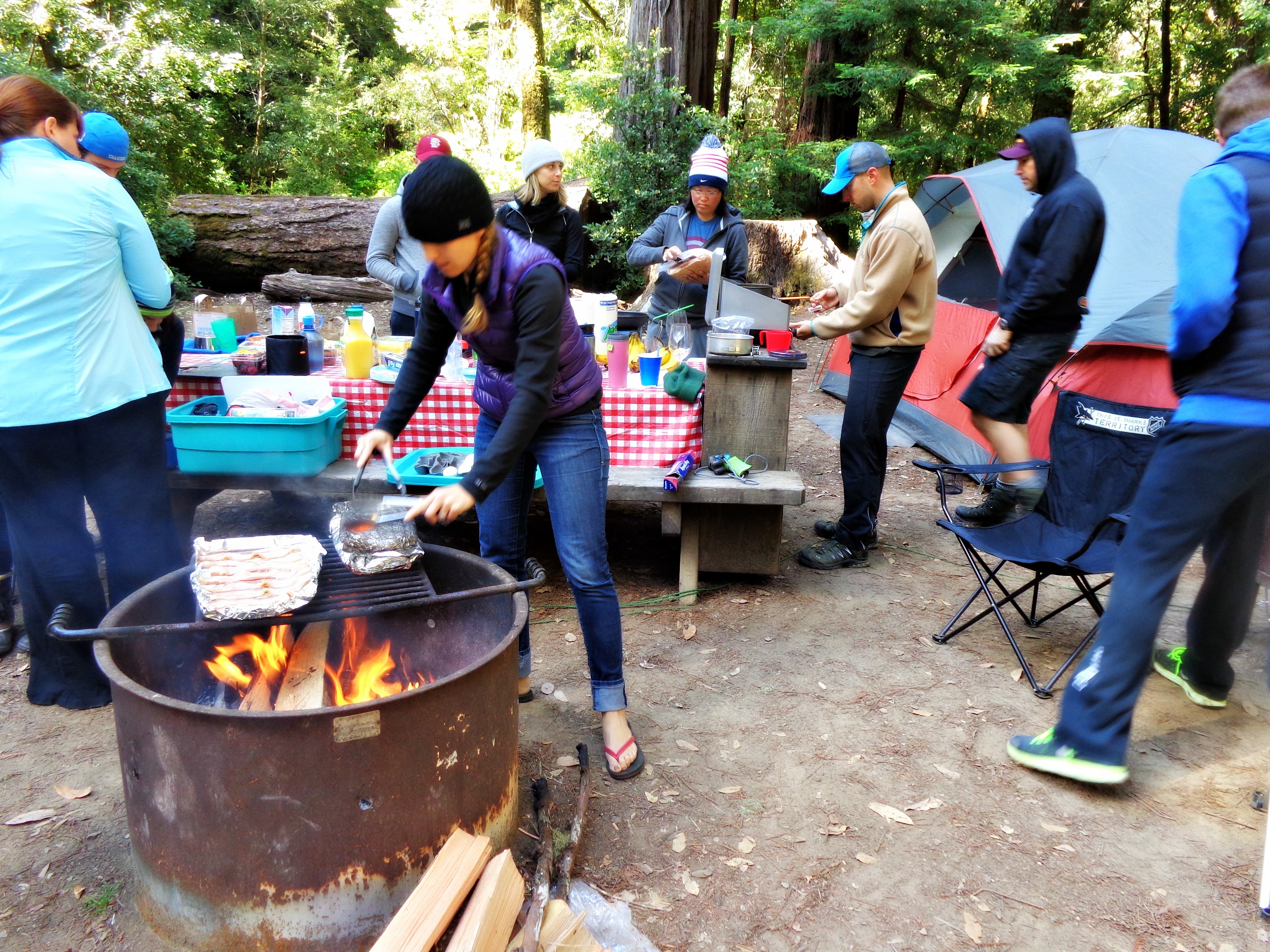 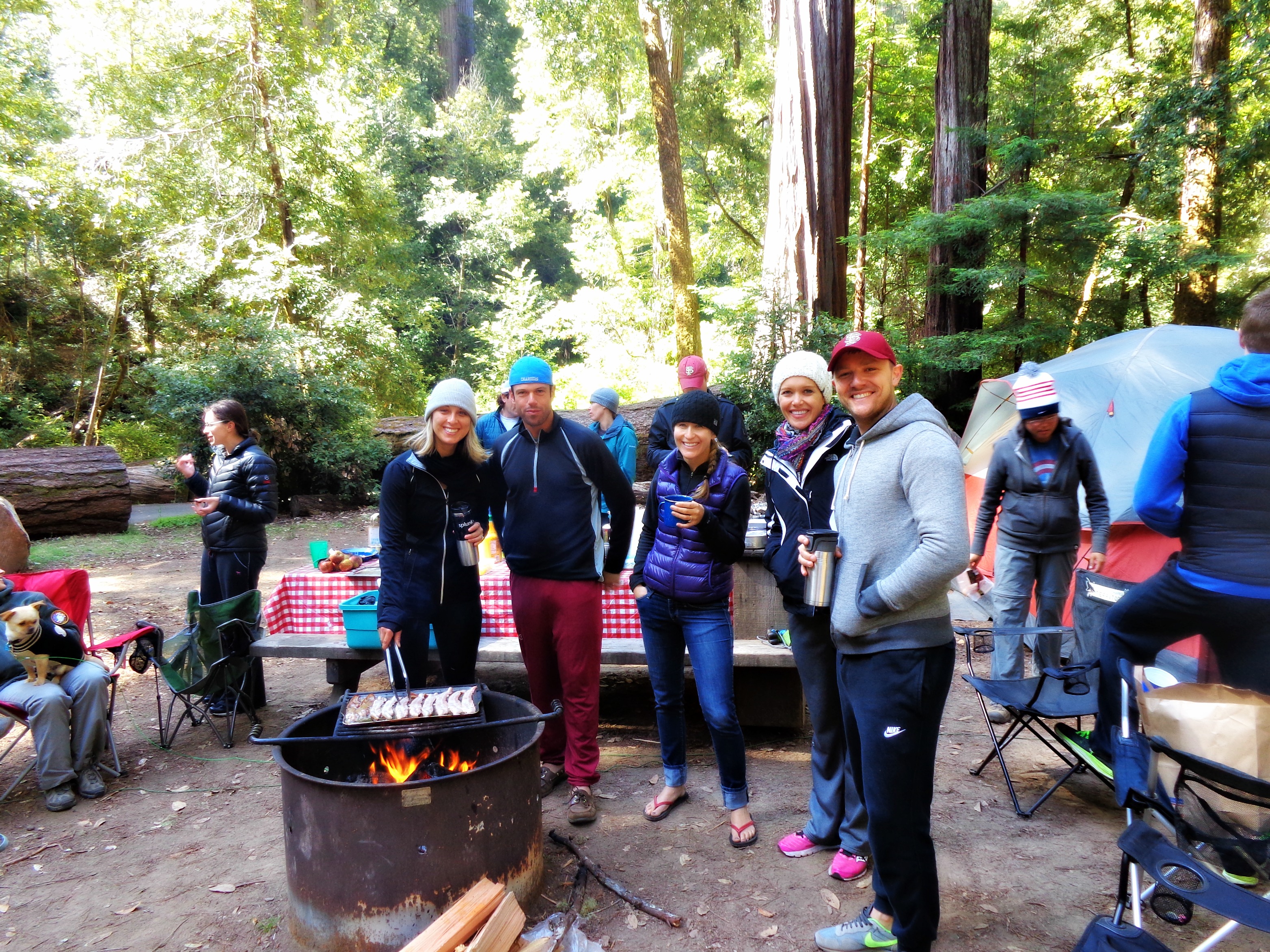 But you have to be diligent during food prep and eating, and that’s because you aren’t allowed to drop crumbs on the ground at all. We all had to sign a waiver called a “Crumb Commitment” indicating we were warned that an $875 fine was possible if you were caught dropping a crumb or leaving your food unattended. And that’s just one example of the strict rules at the park.

After breakfast, almost the entire group headed out on a hike. We chose to do a portion of the Berry Creek Falls loop, which was 3.9 miles of strenuous-level hiking to reach a waterfall via a shaded-path through the redwoods. 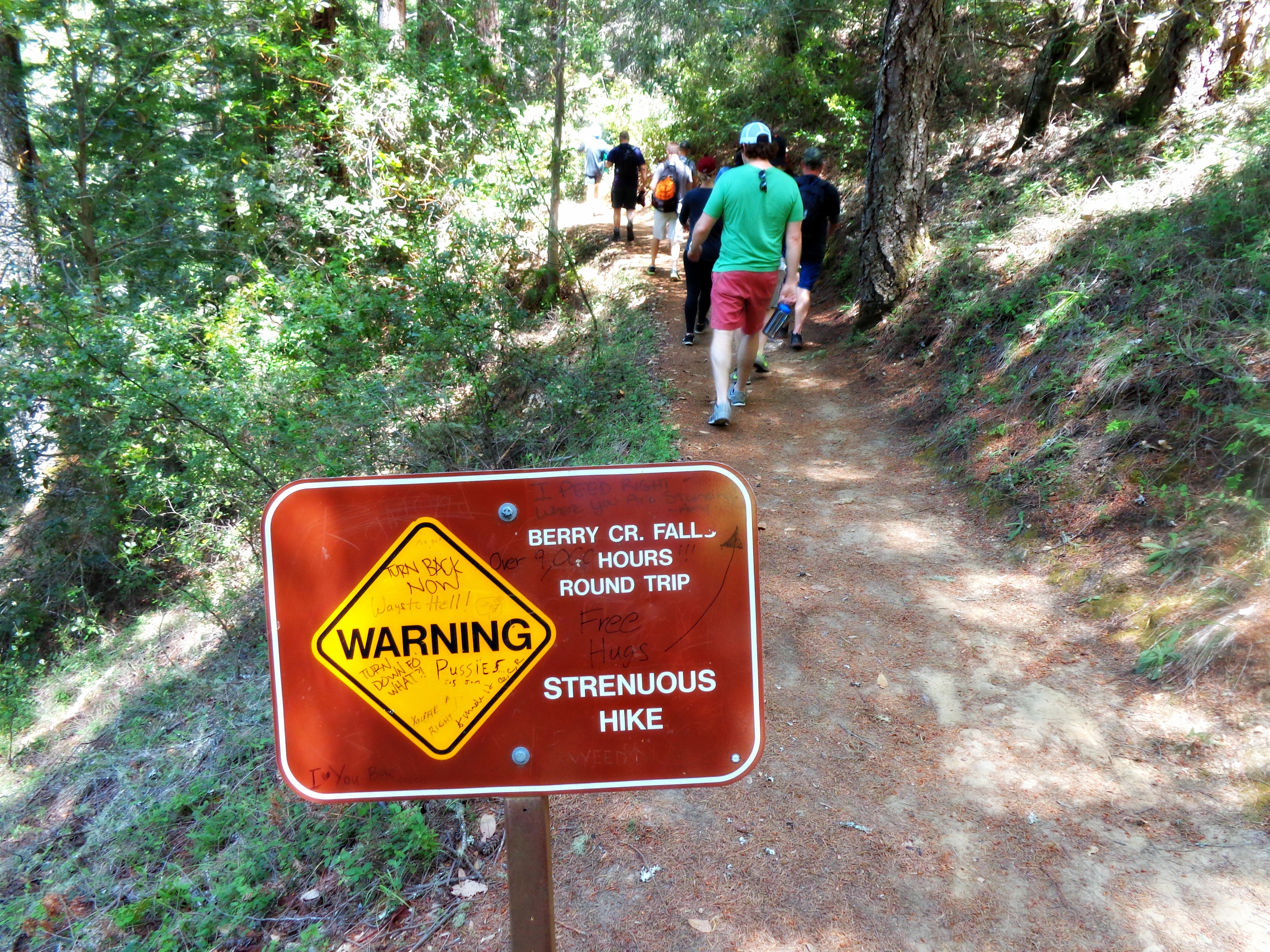 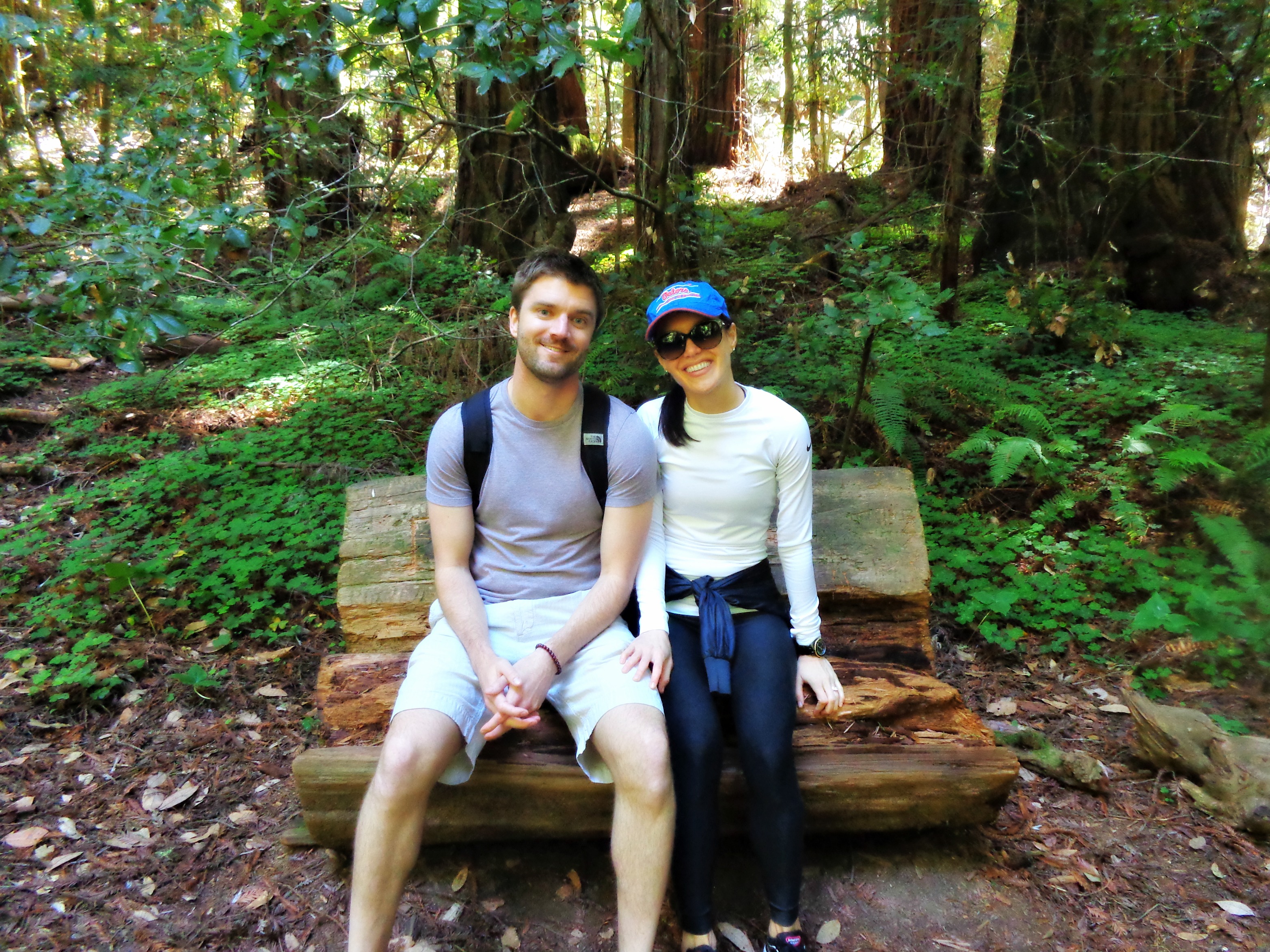 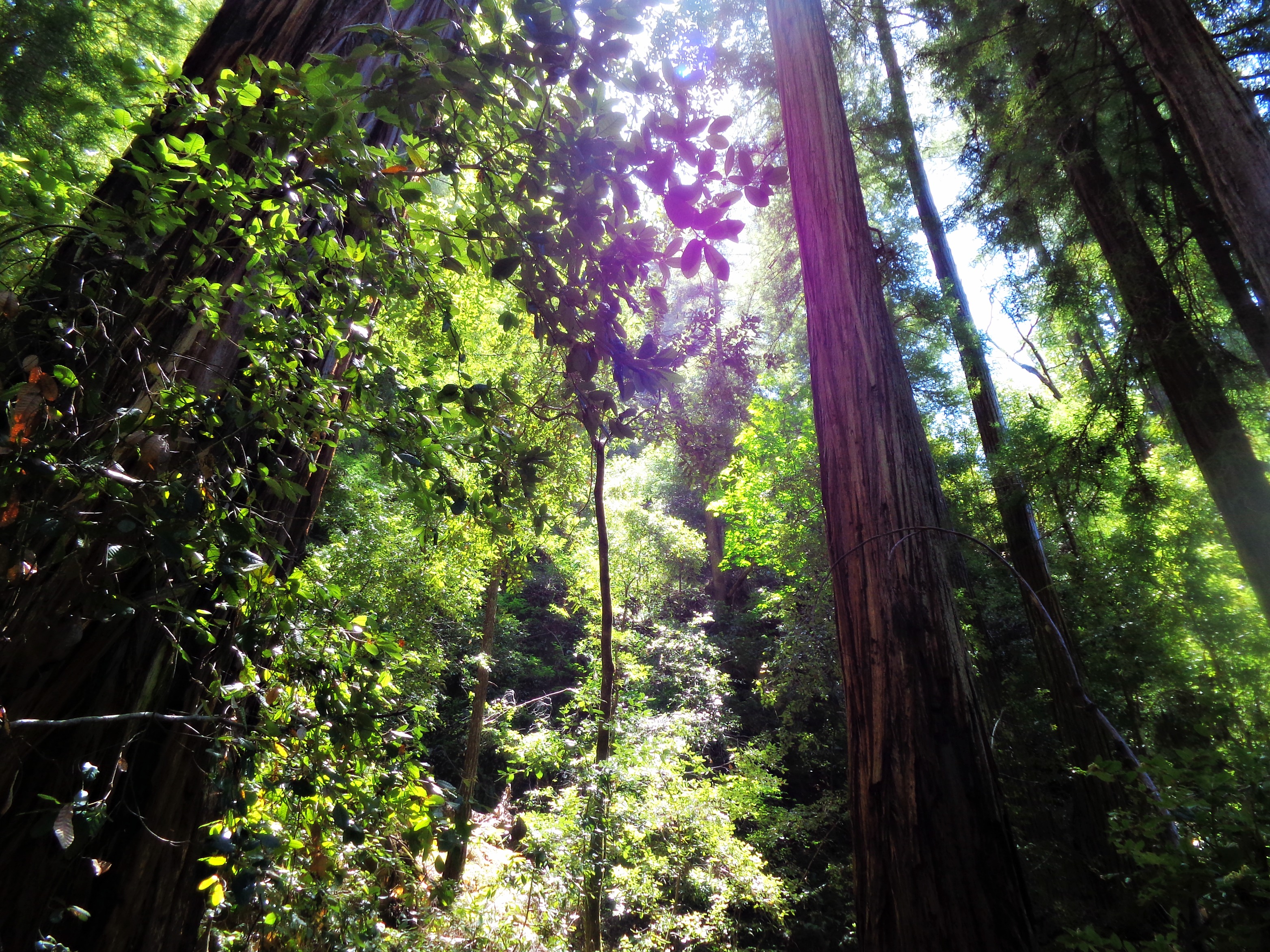 It took us about an hour-and-a-half to get to the waterfalls, where we stopped for lunch and pictures. Some parts of the hike were a little challenging, but I wouldn’t really put it in the strenuous category.

But the length of the hike was what got us. On the way back, we were all feeling heavy legs from all the effort and were very glad to reach home-base around 4 p.m.

The weather was cool, and the sound of nature was awesome. Although we spent most of the hike chatting, at times I would just lag behind a bit and enjoy the silence.

Here’s a shot of the ladies just before the last leg of the hike. 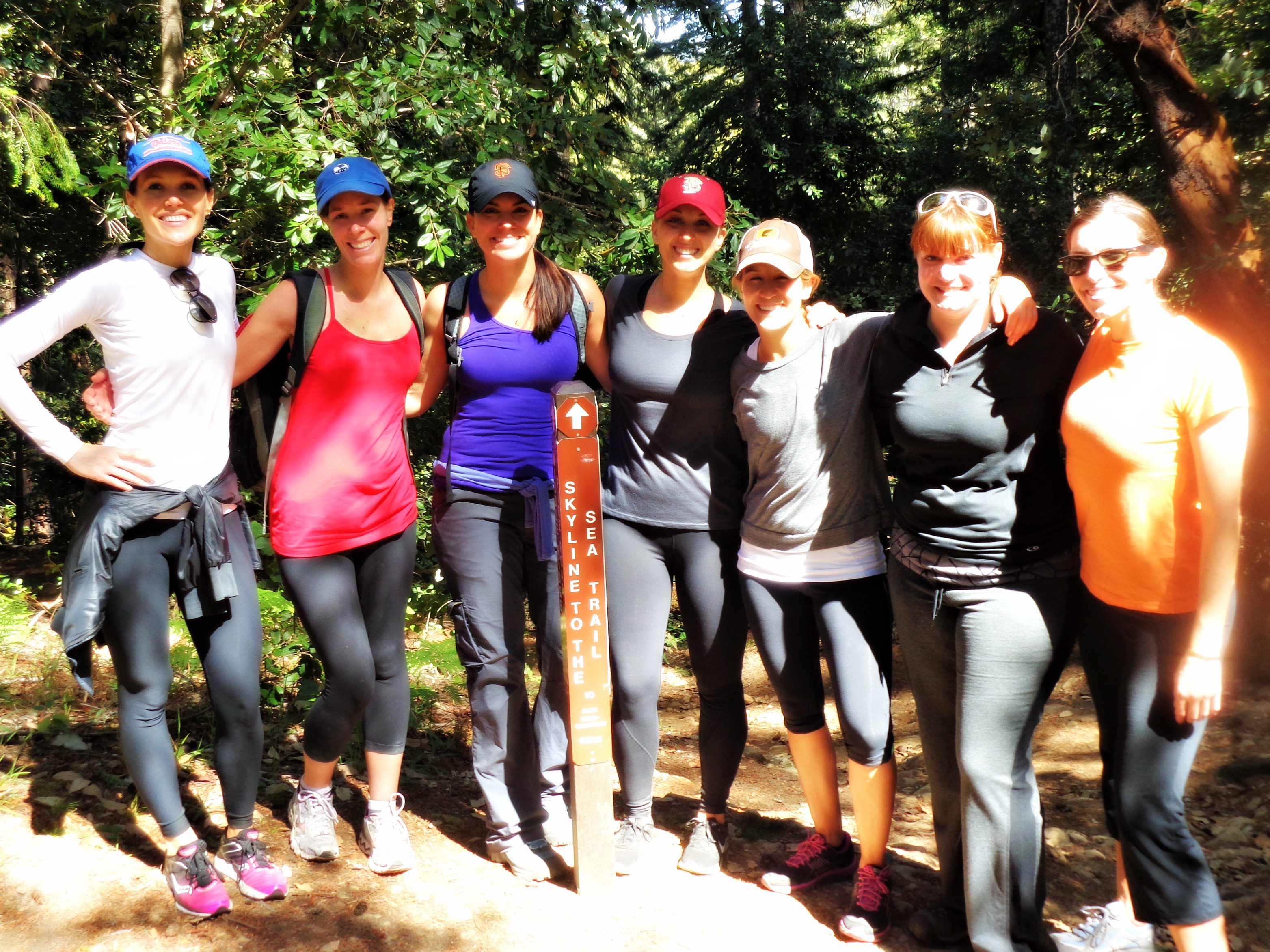 And the gentlemen, all showing off their pasty-white stems. 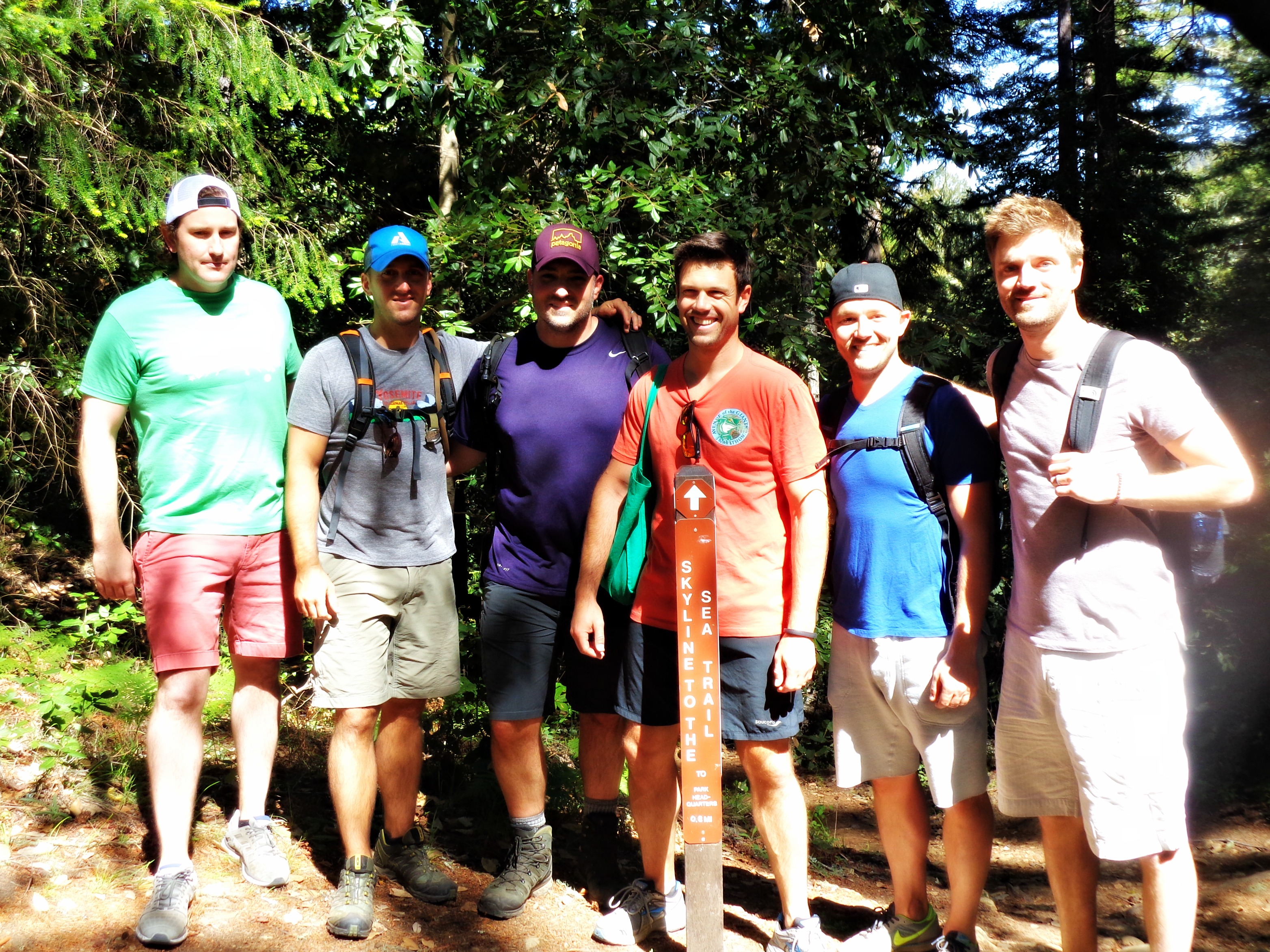 When we got back to the campsite, I led the girls in a quick stretching session. We could all tell our legs were going to be tight, so we made the smart effort to ease the stiffness before sitting in our chairs. And yes, my legs thanked me for that the next morning.

After stretching, we all changed into some more warm clothing and met back around the campfire.

Dinner-time in the woods

Just around 4:30 p.m. we pulled out some beverages, appetizers and started the process of cooking dinner. Appetizers included a colorful display of veggies, hummus, salsa, dip, etc., which we each contributed for community consumption. 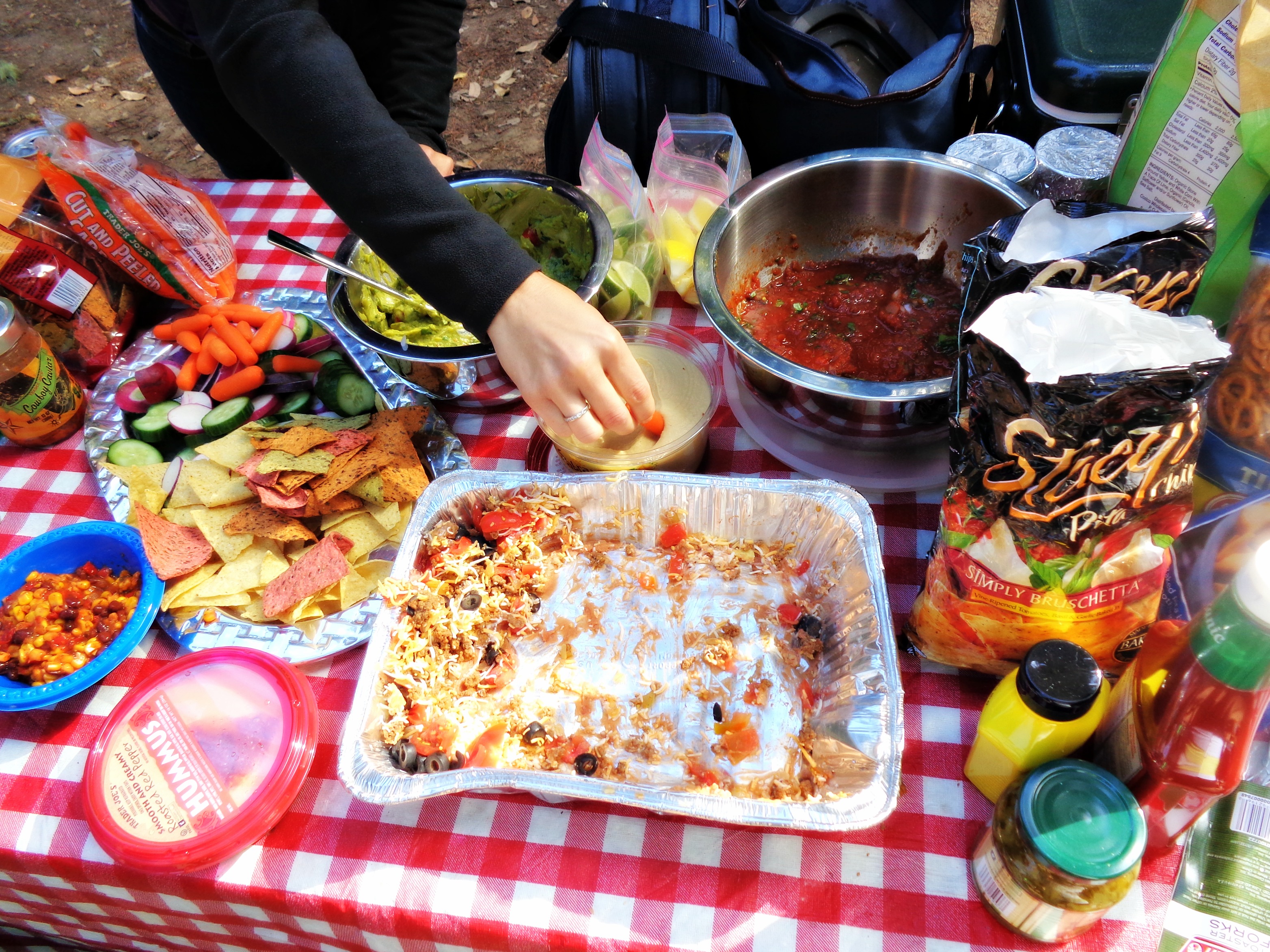 And beverages included whatever you brought in your cooler. Check out my classy wine glass below, filled with chardonnay. 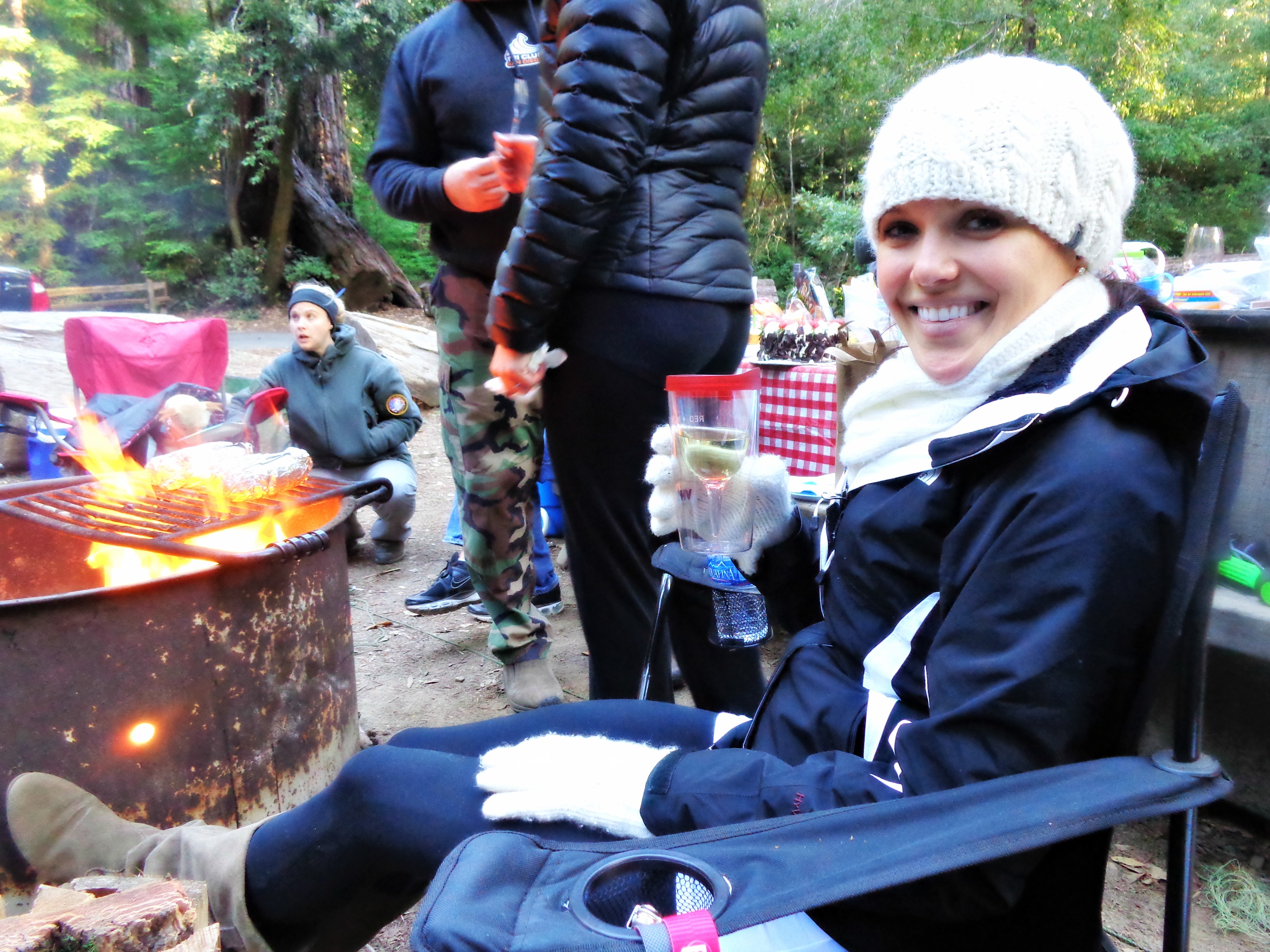 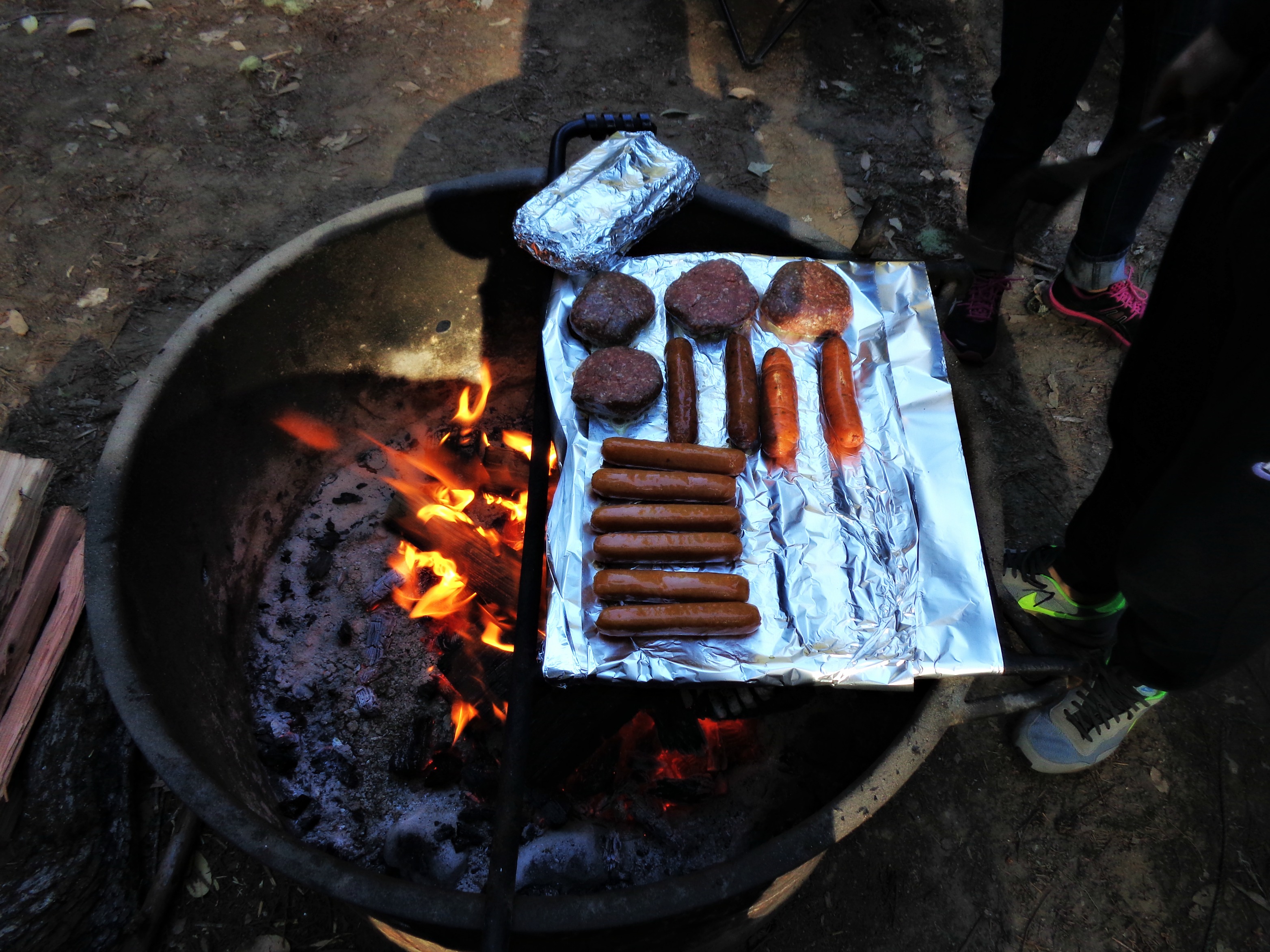 And dessert was plentiful, including birthday cake, cupcakes and s’mores. Here’s a shot of the birthday boy blowing out the candles on his gorgeous and tasty birthday cake, which his wife toted all the way from the city. 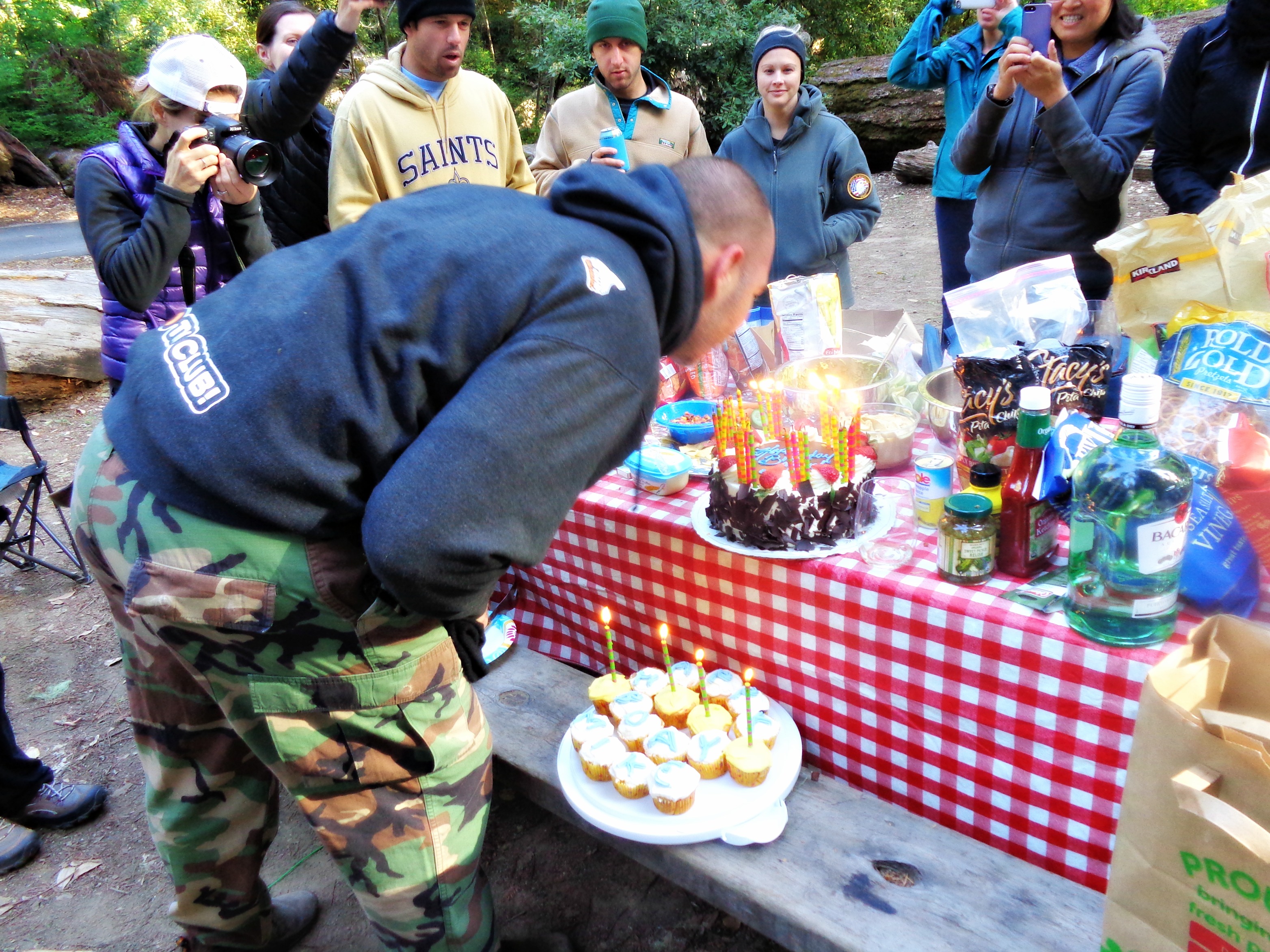 After dinner we played a rousing game of Cards Against Humanity, which I’d never experienced before. 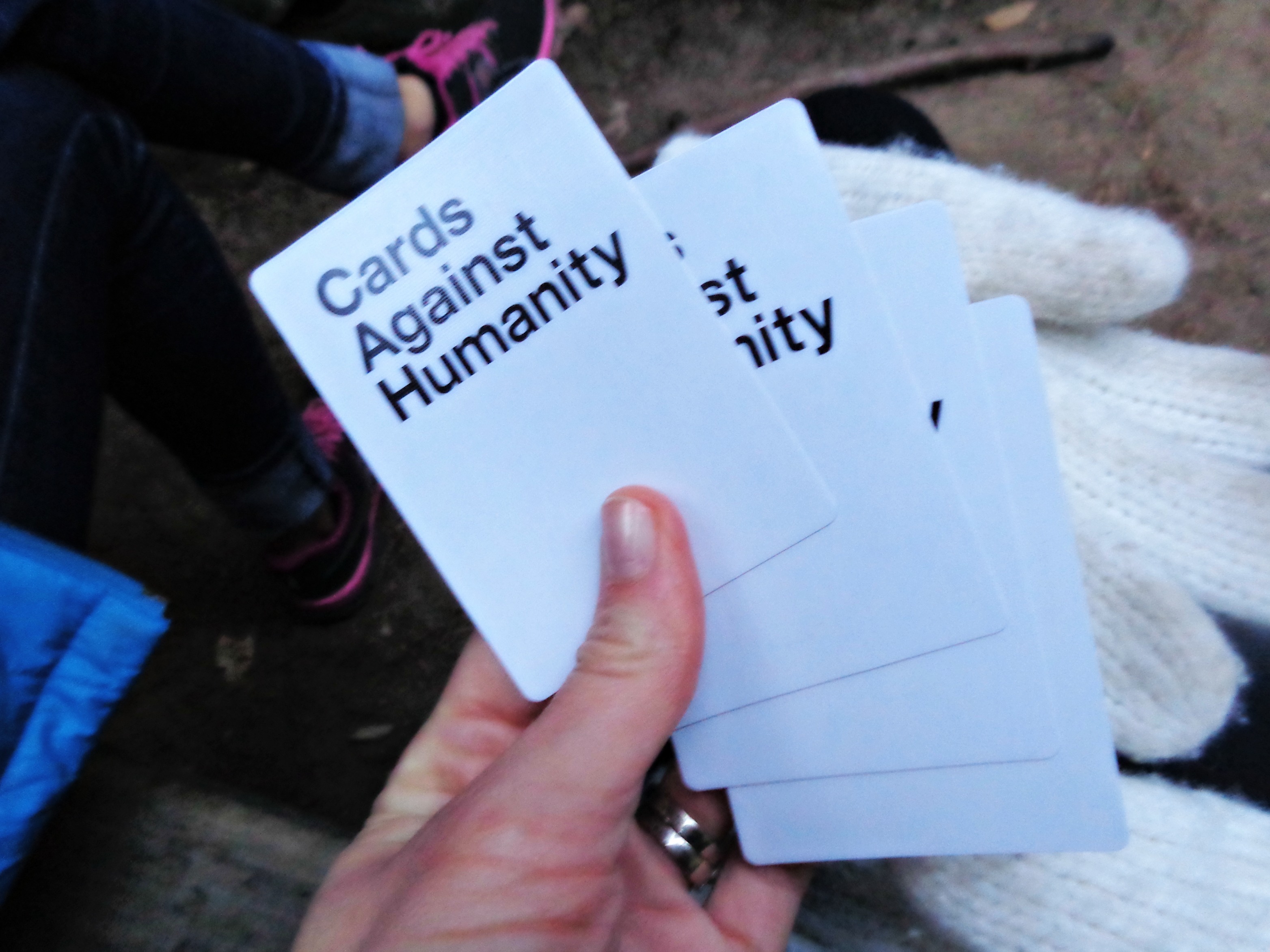 To give you an idea of the tone of the game, the box describes it as “A party game for horrible people.” If you haven’t played it, you’re in for a surprise. It’s basically a raunchy version of Apples to Apples. I loved it, but I didn’t do very well. In fact, I didn’t win a single round.

We also got into a little game of Never Have I Ever, which is something I probably haven’t played since college. Good times ensued.

In addition to those games, there was a friendly s’mores competition with three entrants, in which I self-selected myself to be part of the esteemed judging panel. Because of that, I felt justified in eating numerous s’mores to make sure I made the right decision. When in Rome …

With food, drinks and games, the hours passed quickly and soon it was nightfall, with everyone sitting around enjoying the fire and company. 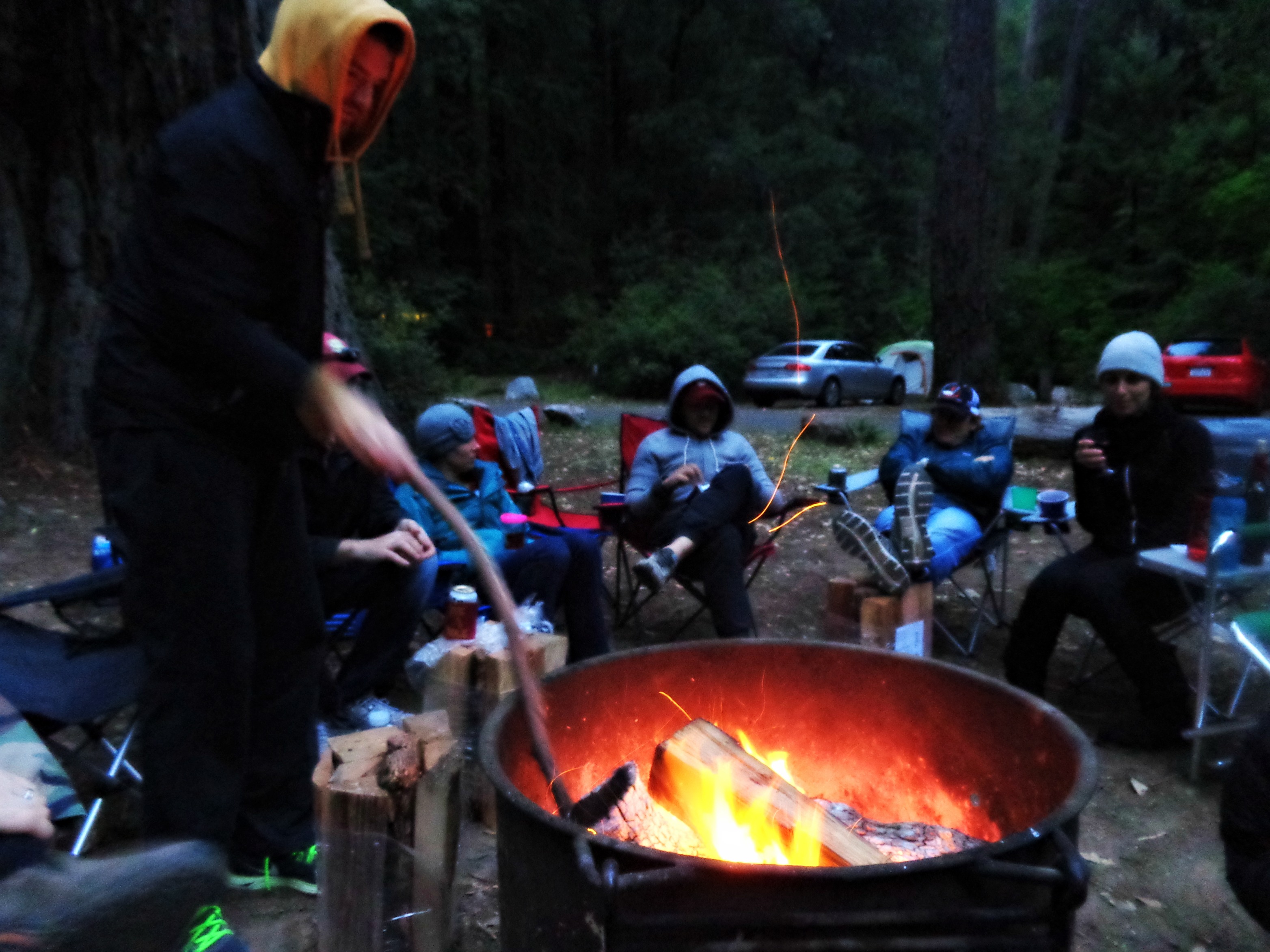 Our party got a little rowdy when the sun went down.

At one point during the night, a neighbor camper from another area walked over to us, shushed us and asked us to keep it down. Well, I’m pretty sure that only made us louder. We did turn down the volume on our country tunes though.

Because it had been a long day of eating, hiking and some more eating, we all checked out a little earlier than the first night and hit our respective tents around 11 p.m.

Here’s the last shot of the night before we signed off. 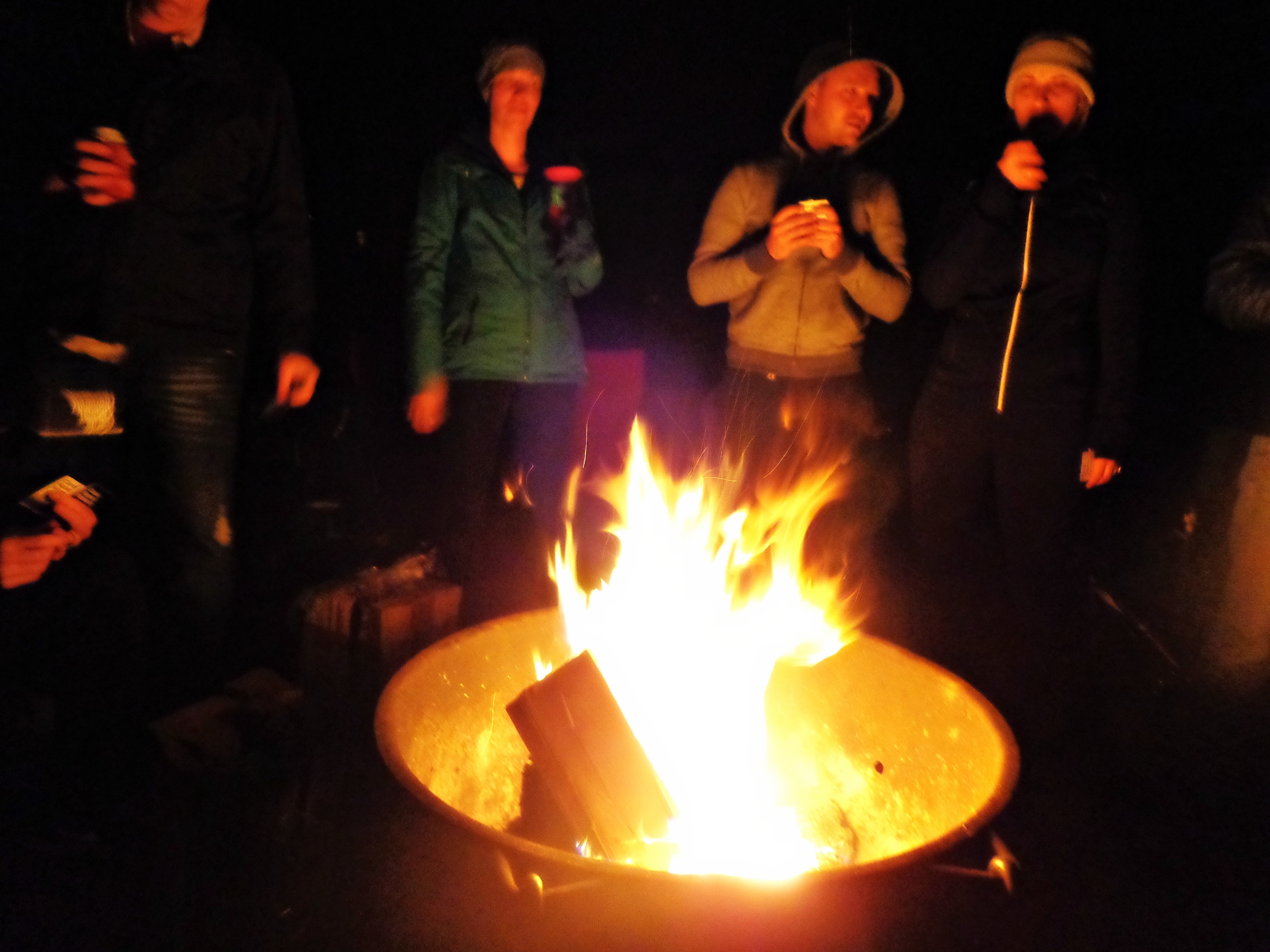 I wouldn’t say I slept any better the second night, because the ground was just as hard as the first, but I did sleep a little later, which was good.

Closing up shop on Sunday

On Sunday morning, we all came back around the campfire to cook up breakfast, recap the fun of the night before, pack up our tents and hit the road.

And let me tell you, the winding, curvy, narrow mountain road is even less fun on the way out than it is on the way there.

Once back in the city, Dave and I went straight to Sports Basement to return our tent and sleeping bags before coming home.

This was my first real camping experience, save for a hiking trip in college, and I was pleasantly surprised at how easy it is. Dave and I would definitely go camping again, but next time we’re bringing an air mattress.

The best part of the camping trip was the people we spent it with. Dave and I had a big group of fun friends in Orlando that we did these types of activities with often, and that’s been hard to find and establish since we moved to San Francisco. We’re really lucky we’ve found at least a few great people who’ve let us tag along with their inner circles.

Overall, a weekend of camping is full of a lot of things I love: friends, being outdoors, getting active and eating good food. You can’t beat that.

Have you ever been on a camping trip? What’s your favorite campfire game?

I love sitting across from these faces. Sending a

If we were having coffee together right now, I'd t

Like many of you, we haven’t had the easiest yea

You can't go too far without good sleep, even if y

Before class vs. after class and definitely not as

That feeling when you have missed travel, events a