Group fitness loving friends! It’s time to review the latest Les Mills group fitness BODYATTACK release number 86. Every three months, Les Mills — which is the international company that produces more than 11 group fitness programs including BODYATTACK, BODYPUMP and CXWORX to name a few — “releases” new choreography, music and moves for each program around the world in more than 80 countries.

I’ve been teaching Les Mills programs for a long time, and BODYATTACK is my newest. I’ve been certified in BODYATTACK for more than a year. Over that time, BODYATTACK has been changing a bit. It used to be thought of as too hard for the everyday person, due to all the jumps and high-intensity work, and it used to have more of a dancey vibe in the aerobics portions. But the creators of BODYATTACK have made it much more welcoming for all levels, while still offering huge challenges for those who want them and taking away some of the dance.

In case you’re not familiar with BODYATTACK, it’s a 55-minute cardio class focused on aerobics, strength and sports movements. For the basics on BODYATTACK, head on over to my post on BODYATTACK tips for first-timers, or check this out straight from the folks at Les Mills:

And when you finish a class, you’re red-faced and dead, but feeling on top of the world. Just look at these smiles post-ATTACK a few weeks back in my Saturday morning class … 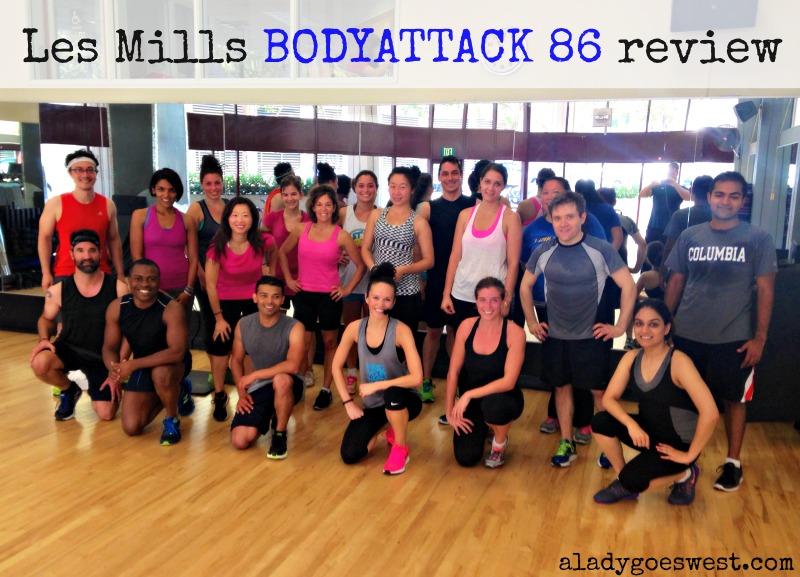 Overall, my thoughts on BODYATTACK 86:

And now for a track-by-track breakdown. Please note the exact remix of each song wasn’t always available for linking, so some of these are just similar if you care to click through and hear the tune.

I found that BODYATTACK 86 took a little while to learn because a few of the tracks have different sets throughout. That means you have to spend a little bit of time setting members up with the move name and compulsory cue during nearly every set, so be prepared with short and sharp cuing. And other than the arm combination in track three, the arm-lines are not emphasized as much throughout, and that seems to make the entire release seem more sporty and less aerobicy. Once again, if you’re offering low options, try to say something other than “low option” each time, perhaps something like “your choice” “a different path” or “pull back with this.” Have fun with this one, and make sure you welcome everyone, set a great tone and go super hard in track four and track nine.

Enjoy the ride of this release. It’s not so much about being perfect, as it is about working at your own level and being a part of something big — that’s the vibe of BODYATTACK. Push yourself hard when it’s time to push, but just feel the music and energy during the other tracks and don’t think too much. You’ll work hard, you’ll sweat and you’ll feel the burn, but somehow at the end of the class you’ll feel amazing. Every single time.

There you have it. Les Mills BODYATTACK 86 has been reviewed. I’m going to keep teaching this release a couple more weeks before bringing in some older tracks. This release has not become my new favorite, but I really like it. As the program grows and changes, I can’t wait to see where BODYATTACK goes for release 87.

If you enjoyed this review, please check out my previous Les Mills posts:

Check back soon for a review of BODYPUMP 91. But for now, I hope you’re having a great day!