All you group fitness lovers, today’s the day we finally talk about the latest Les Mills BODYATTACK release number 88. I’ve taught this release more than a dozen times, and although I’ve gone back to teaching older releases, I didn’t want to miss the chance to discuss the moves and tunes. 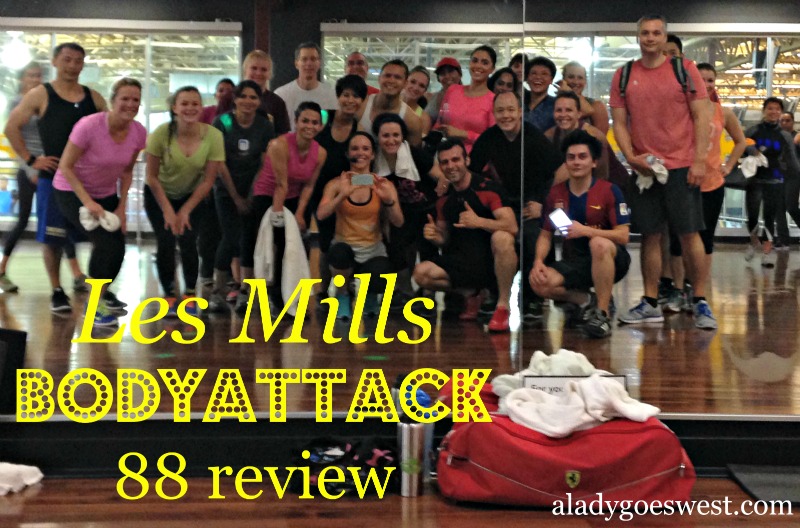 First, here are a few things you may want to know about BODYATTACK:

And for some more background information …

What is a Les Mills release?

Every three months, Les Mills, the international company based in New Zealand that produces more than 11 group fitness programs including BODYATTACK, BODYPUMP and CXWORX to name a few, “releases” new choreography, music and moves for each program around the world in more than 80 countries. That means people speaking different languages in different time-zones are doing the same quality workouts, led by Les Mills instructors, who are all part of the “Tribe.”

As an instructor, you get the release about a month or so ahead of time to prepare and teach the program on a designated “launch” day decided by the gym where you teach. I debuted BODYATTACK 88 during the first week of April at 24 Hour Fitness.

For the nitty-gritty on BODYATTACK, head on over to my post on BODYATTACK tips for first-timers, or check this out straight from the folks at Les Mills:

Overall, my thoughts on BODYATTACK 88:

And now for a track-by-track breakdown, with links to some of the songs.

There you have it! BODYATTACK 88 has been reviewed. It’s a strong release, with some hard parts and some easy parts. A holistic ride if you ask me.

For instructors: This one was pretty easy to learn because of all the repetition. Make sure you master the new moves before teaching them (like the side step over, high ice-skater, etc.), and be prepared to give plenty of options during each track to help people of all levels be successful. Also, if you teach a shorter BODYATTACK format, refer to the choreography notes for the new track line-ups to make up the 30-and 45-minute versions. For more tips, check out: Top 10 ways to grow your group fitness classes.

For participants: Be ready for a good time with this release. The music is fun, the workout will challenge you, and you’ll have plenty of chances to run around the room an interact with your instructor and fellow participants. Oh and during track five, try to do as many sets of push-ups as you can on your toes. You’ll get stronger so quickly! For more tips, check out: How to get better results from group fitness classes.

As you can see, I have a lot to say about Les Mills. If you want to read a little bit more, please check out some of my previous posts:

I hope you have an awesome day, my friends! I’ll see you back here tomorrow for “Friday Favorites.”

Have you tried BODYATTACK 88? What are your thoughts?

What has been the best workout you’ve done lately?