Hello all! It’s about that time for a review of the latest Les Mills BODYPUMP group fitness release number 93.

But first, let me share these fun facts with you …

My history with and love for Les Mills group fitness

It’s clear that I’m a huge believer in the power of working out in the group setting and Les Mills group fitness programs in general. In fact, the first time I ever lifted weights was in a Les Mills BODYPUMP class. Fast forward to today, more than six years later, and I’m an instructor of the class, as well as an instructor of several other Les Mills programs and am a certified personal trainer. I think it’s safe to say that BODYPUMP has been a game-changer for me, as well as for many other people. I’ve seen so many participants throughout the years change their lives by improving their fitness, body and health, just by attending regular classes. They attend those classes because they enjoy them. There’s just something different about a Les Mills workout. The moves are choreographed to great music, and the energy is high. And Les Mills continues to innovate by “releasing” brand new moves and music to instructors around the world every three months.

The 24 Hour Fitness gyms in the San Francisco Bay Area where I teach “launched” or “debuted” the latest Les Mills releases during the first week of April. I’ve been teaching the latest releases for a couple of weeks, so now I’m ready to share my feedback with you. (If you need a primer on all things BODYPUMP first, check out “BODYPUMP overview and tips for first-timers.”) 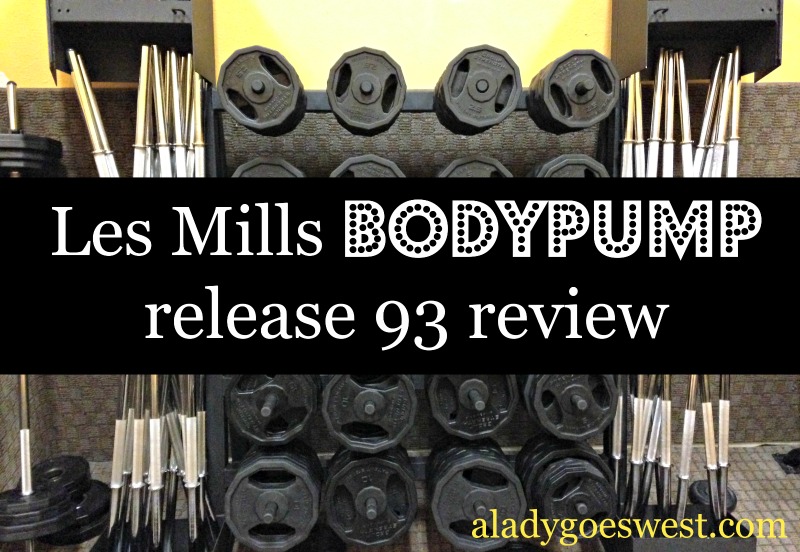 *There are also alternate chest and triceps tracks, which I have not taught. I generally stick to the original line-up with every release.

I found this release very easy to learn because of all the repetition. However, I practiced this one with weights quite a bit, to get the feel of some of the more challenging tracks. As a reminder, it’s important to find and locate new people in the class and let them know that they can leave after the first four tracks, as this is something stressed in the education and notes portion of the release. Other than that, work on your timing and tempo, because that is critical in many of the tracks on this release. And if you’re looking for a few tips on how to pack your classes, check out my post on “Top 10 ways to grow your group fitness classes.”

Go up in weight! It’s time to start challenging yourself, and BODYPUMP 93 can be the release to do that. Just pick a couple of tracks and add some extra weight on your bar. In order to keep getting stronger, you have to keep testing your limits, so don’t be scared. And if you want to make sure you’re getting the most of the other classes you take, check out my tips on “How to get better results from group fitness.”

That about does it for BODYPUMP 93! I can’t wait to see what’s in store for the next release.

As you can see, I have a lot to say about Les Mills. If you want to read a little bit more, please check out some of my previous posts:

That’s it, guys! I hope you have lovely Tuesday! See you back here tomorrow for some talk about food.

Have you ever taken a BODYPUMP class?

For instructors or participants, what are your thoughts on BODYPUMP 93?

What type of music do you like to work out to?