Hi, friends! Happy May! I hope your weekend was great. Mine was pretty full. Weekend stories and my weekly workouts coming right up.

Not much to report about Friday. In the afternoon, I taught my usual Bootybarre class, and then picked up Dave from the BART station shortly thereafter. We made grass-fed burgers and butternut squash fries at home and watched TV, because we were each preparing for an early wake-up call the next day. (And P.S. is anyone watching “The Voice“? This is my first season watching it, and I totally love it! So much talent!)

On Saturday morning, I was up before 6 a.m. to pack up and make the just-under-an-hour trip down south to San Jose for the Les Mills Super Quarterly event. I’ve been to two quarterlies before, once in Orlando and once two years ago in Livermore, which you can read all about here: an amazing day of group fitness at the Les Mills Super Q. And these events bring together Les Mills instructors and fans to take masterclasses from super-talented presenters from all over the nation. You also get to experience the latest releases together, before the programs hit the gyms. It’s a good time! 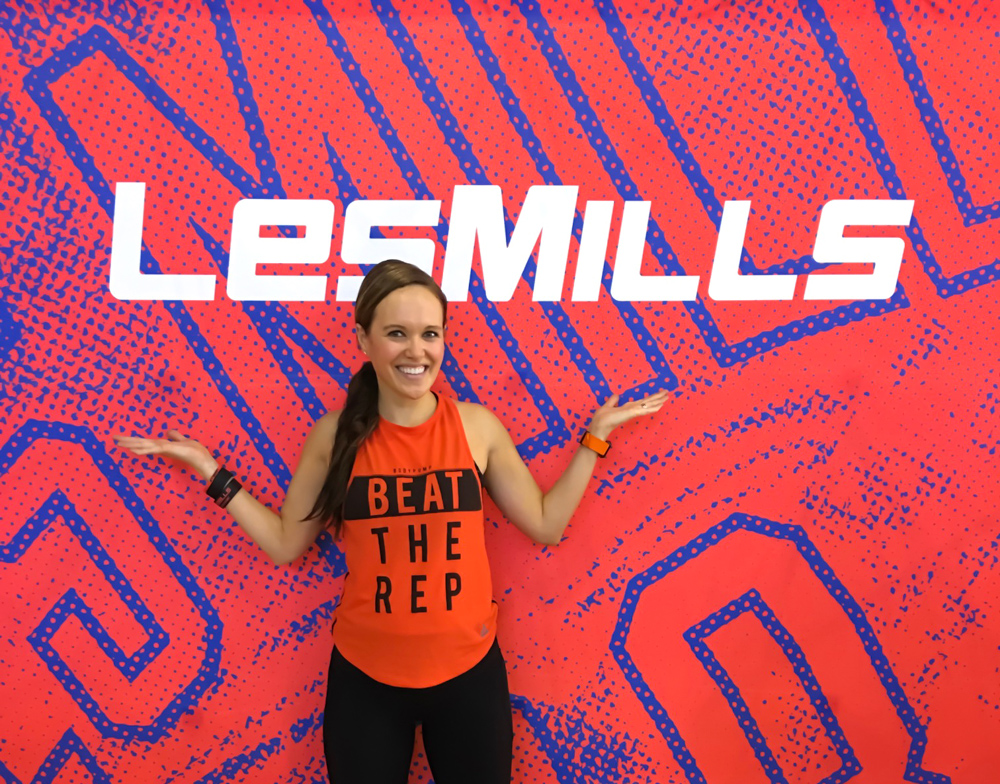 I didn’t actually make plans to go to the Super Q until the very last minute, as I wasn’t sure if I would be up for the many hours of group fitness in my current state. But as expected, I’m glad I decided to go. It was not without its ups and downs though. On Friday afternoon, I got my first headache of my pregnancy, and it lingered throughout the entire weekend.

On Saturday morning, I was a little upset to see it had stuck with me overnight and then it basically hurt the entire time I was at the Super Q. Loud music + tough workouts, does not equal a great environment for a pounding head. But that is neither here nor there, because I hydrated, applied some peppermint oil to my temples and attempted to cope. Because I seriously love group fitness events with tons of uber-excited Les Mills people running around ready to go hard. 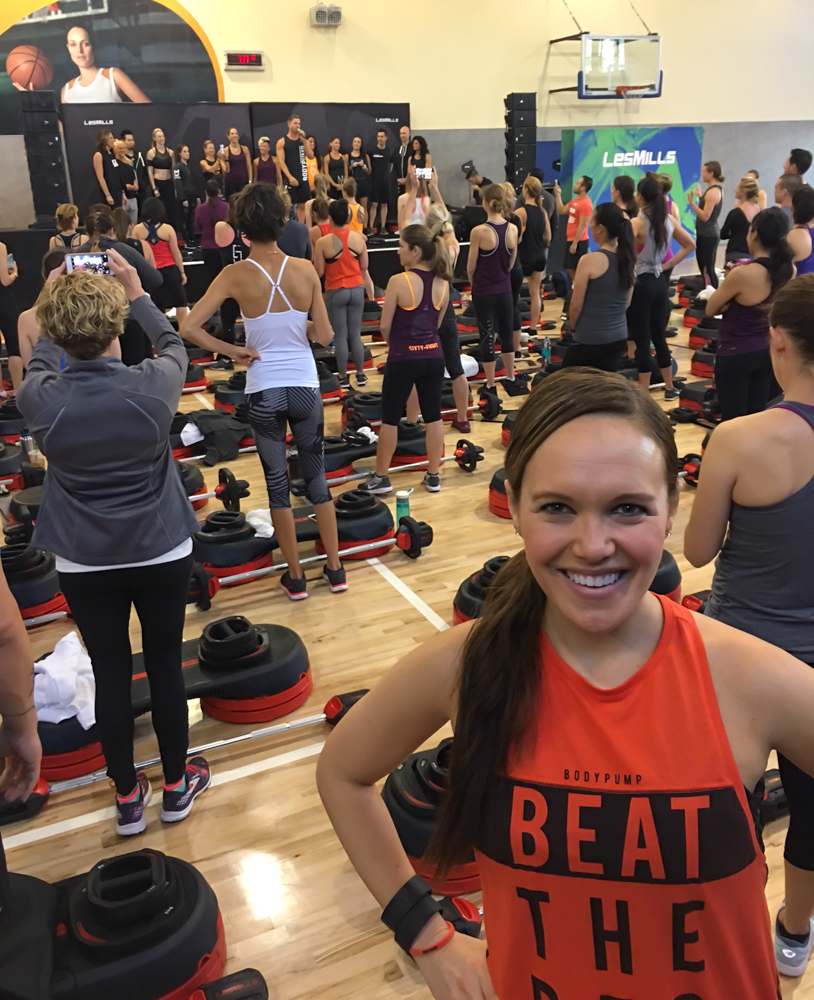 First up at the Super Q was BODYPUMP 102, which is great release. There are some old-school BODYPUMP moves included, like the Arnold press, and some chances to work your arms one at a time in the biceps and shoulder tracks, which is a nice change of pace. I was very proud to see my fellow Walnut Creek instructor, Will, (who I always team teach launches with), making his debut on the stage at this event during BODYPUMP. He did great! Another stand-out from the day was seeing Adam Snow Bramski present BODYPUMP. I’d never seen him in person before, and he has an incredible presence and style. Two thumbs up for him! Funny story: I was actually in the bathroom when BODYPUMP 102 started somehow. I thought we had a lot of time left before they began, but apparently not. I came back to the packed basketball court to find we were about halfway through the warm-up. Whoops!

Next up, I took about 25 minutes of BODYSTEP 108 with Amanda Scales, who has led both my AIM 2 for BODYPUMP and AIM 1 for BODYATTACK years ago. I really enjoy BODYSTEP and wish it was offered in the Bay Area. It is definitely not a cheesy step class of years past and is very athletic now, including weights and conditioning. And it’s fun. It’s a program I would want to train on in the future, and Amanda (and her team) delivered it flawlessly.

From there, I got my first chance at trying out the SH’BAM 28 dance workout. It’s only 45 minutes long and is a little bit more laid-back and relaxed than the more difficult BODYJAM, which I’ve taken a few times. I had a great time trying out this class. It was fun, easy to catch on, yet not at all too easy. It’s all about feeling like a star in your own dance session, which is such a cool concept. I only did about half of this class as well, because my head was pounding though. So sad!

My last bit of working out for the day came in the form of the first few tracks of BODYATTACK 97. I haven’t been teaching BODYATTACK in the last few months, so I knew I needed to take it easy. In addition to the headache and the pregnancy, I had a lot going against me in this class, as it came just before lunch-time. Nonetheless, I stuck around and watched the whole workout after I bowed out, and it seems that BODYATTACK is getting more and more challenging! Like push-ups in the second peak of track nine, nearly at the end of class. What?

(And for another snafu from the day, the lunch I made ahead of time on Friday night was left on the counter and not refrigerated, so I had to toss it. That meant, in the morning, I made a PBJ on sprouted bread in a pinch, and it wasn’t what I planned to eat, but was quite satisfying.) 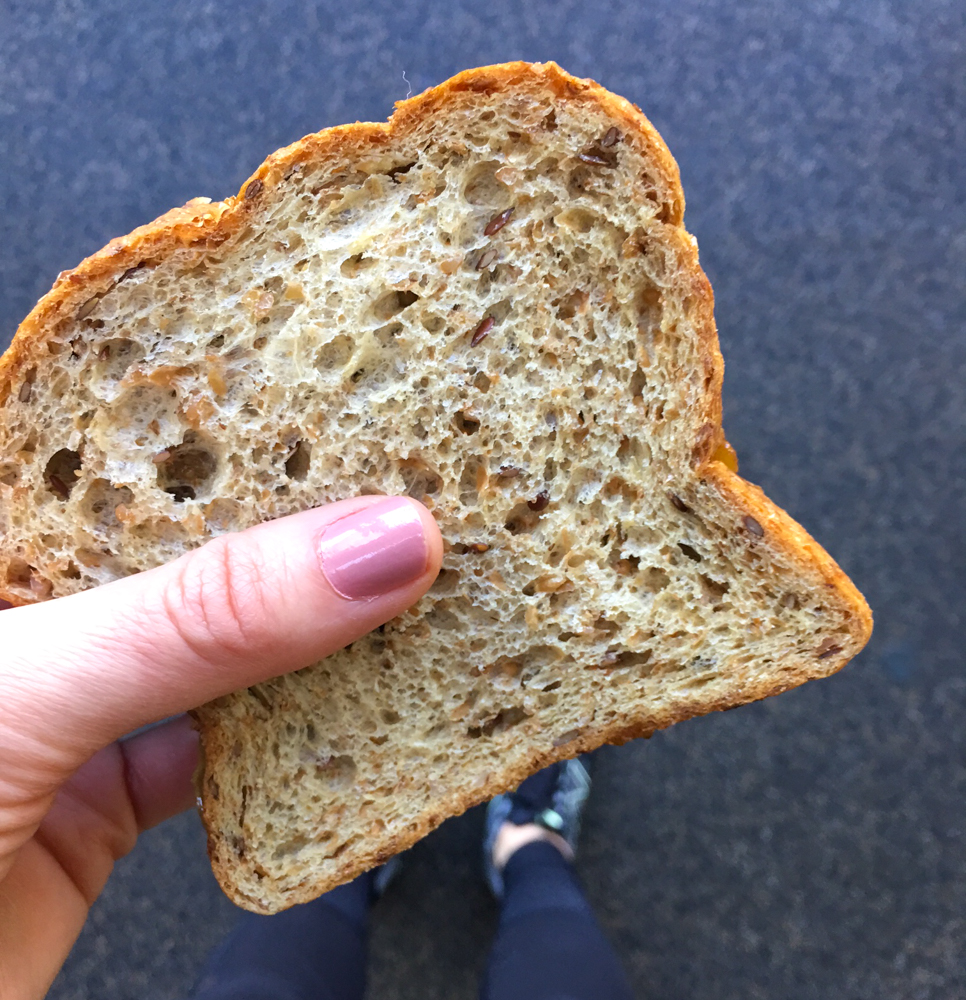 In between workouts and classes, I chatted with my fellow instructors, ate all of the snacks that I packed and soaked up the Les Mills scene. I also stayed for a portion of the education session, which was all about improving “layer 2” coaching when you teach. In Les Mills terms, layer 2 is when you give follow-up cues after the initial set-up to get people improving their form or manipulating the intensity of moves. While it sounds easy, layer 2 is one place where many instructors need a little help, so it was a good refresh.

And that was the day for me. There were a couple more workouts left, but I was totally spent, so I headed out around 2:30 p.m., having arrived at 7:30 a.m. And even though I didn’t get to go all-out in all of the classes, like I would have wanted, I still burned a few calories … 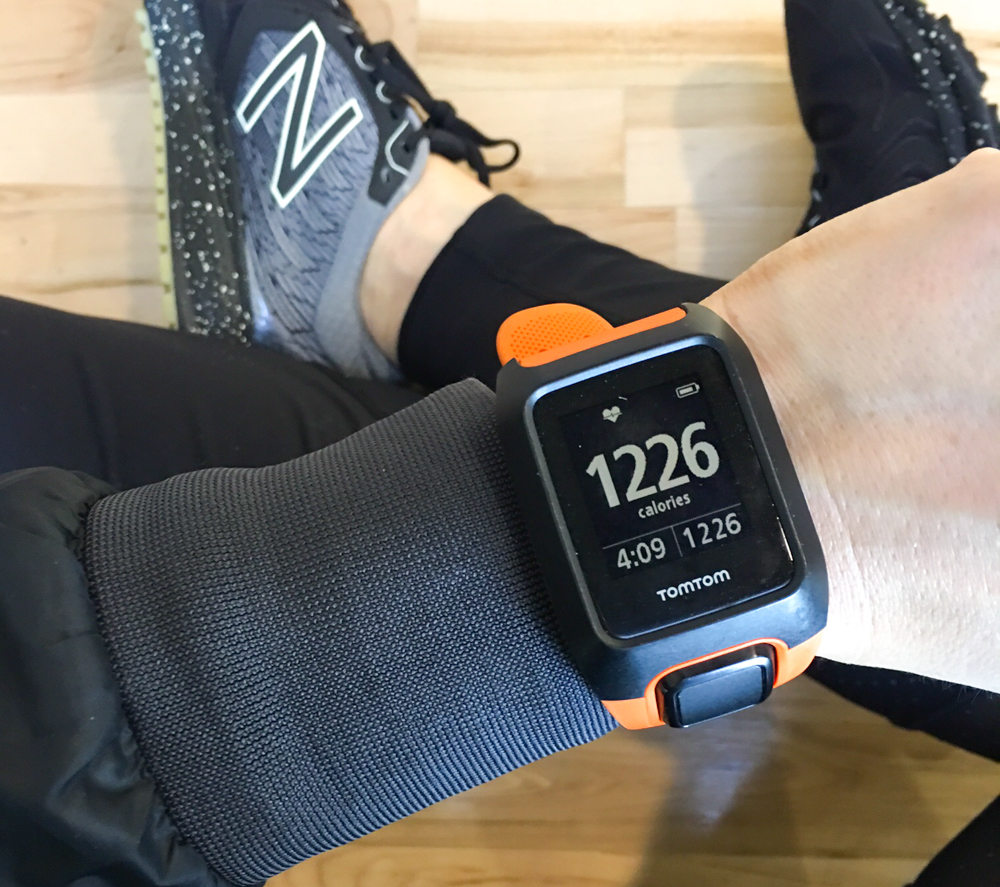 Dave had been gone all day as well at a golf tournament and made it home just before me. That afternoon and evening, my headache was pretty bad, so after a long hot shower, I tried cold compresses and heat to soothe the pain, and nothing was very helpful. We ended up ordering take-out from a Thai place and laying low on the couch. I was exhausted, but ultimately glad I made the trip down to hang out with my Les Mills tribe. If you want to attend a future event, check out the Les Mills schedule here.

We’ll keep it short about Sunday. We did stuff around the house, ran some errands and ended up going out to lunch. While I was all set to head to Lettuce, our usual spot for a huge salad, Dave thought we should branch, so instead we went to Tender Greens. I opted for a falafel salad, and it was decent, but not as amazing as some of the other things I’ve ordered there. 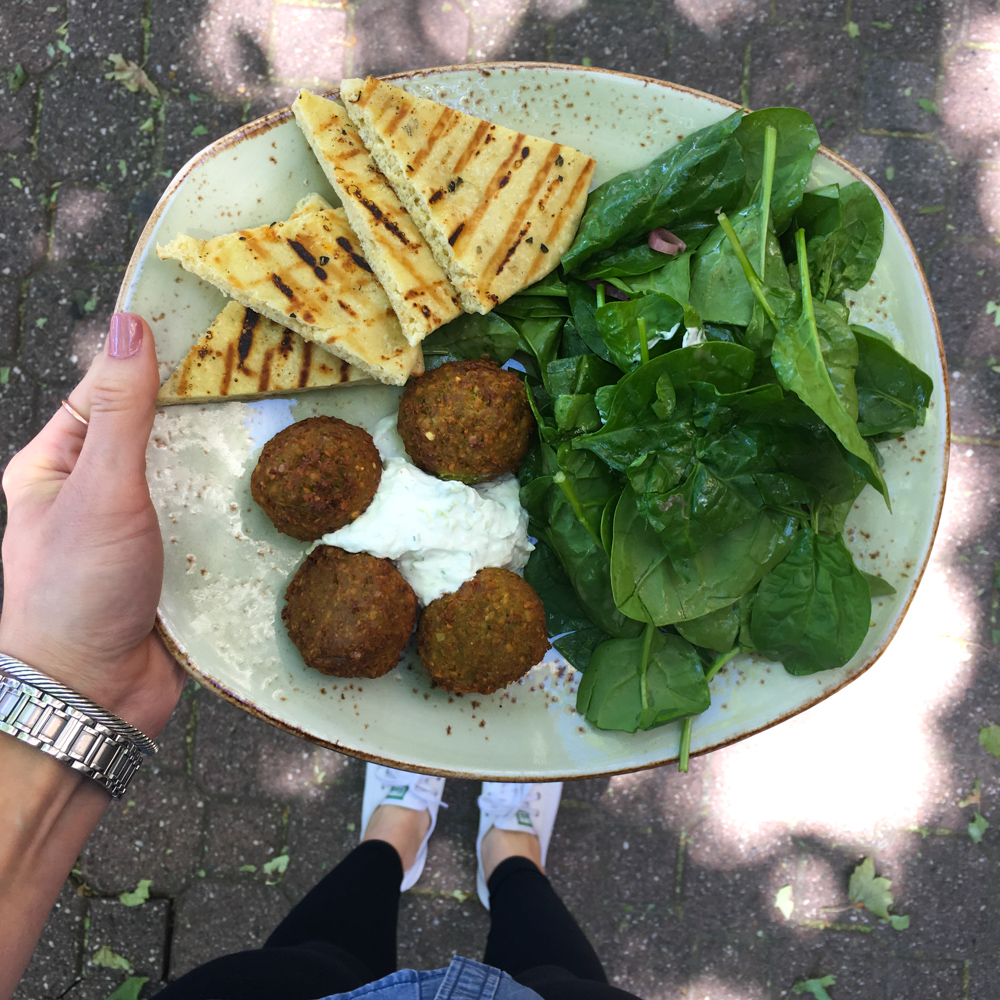 After lunch, we finally went to the San Francisco Creamery in downtown Walnut Creek on Locust Street, just a few doors down from Tender Greens. This place is actually pretty noteworthy because it’s been featured on “Man V. Food,” and we’ve been meaning to go for a long time. Because we were still a little full from lunch, we each just got a junior scoop after sampling a few options. I selected pumpkin pie, while Dave went for some chocolatey peanut butter goodness. So delicious! And creamy! We will be back!

By the way, this place has a huge sundae called the “Kitchen Sink,” which has three bananas and more than eight scoops of ice cream and is a challenge for six people to eat. If you do it alone, you get your picture on the wall. Sounds fun, but maybe not something I will ever take part in. But never say never to trying it with a group! 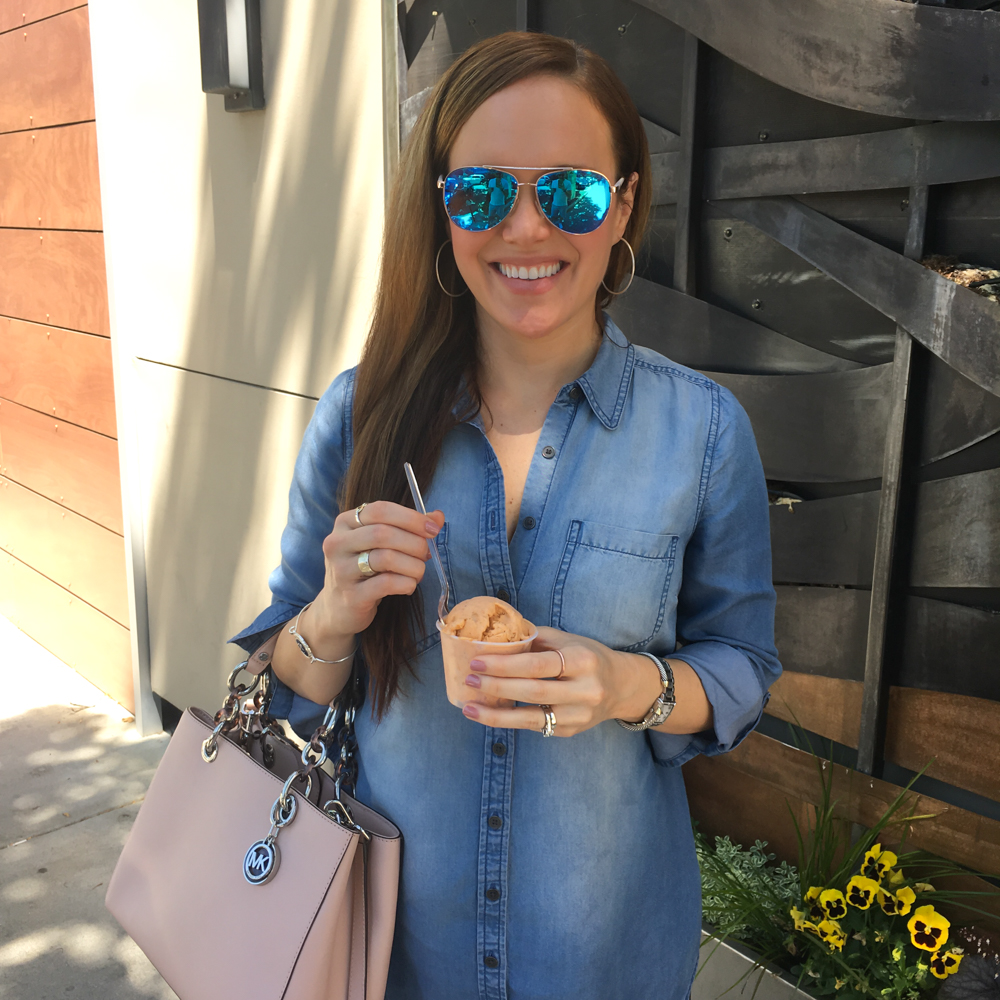 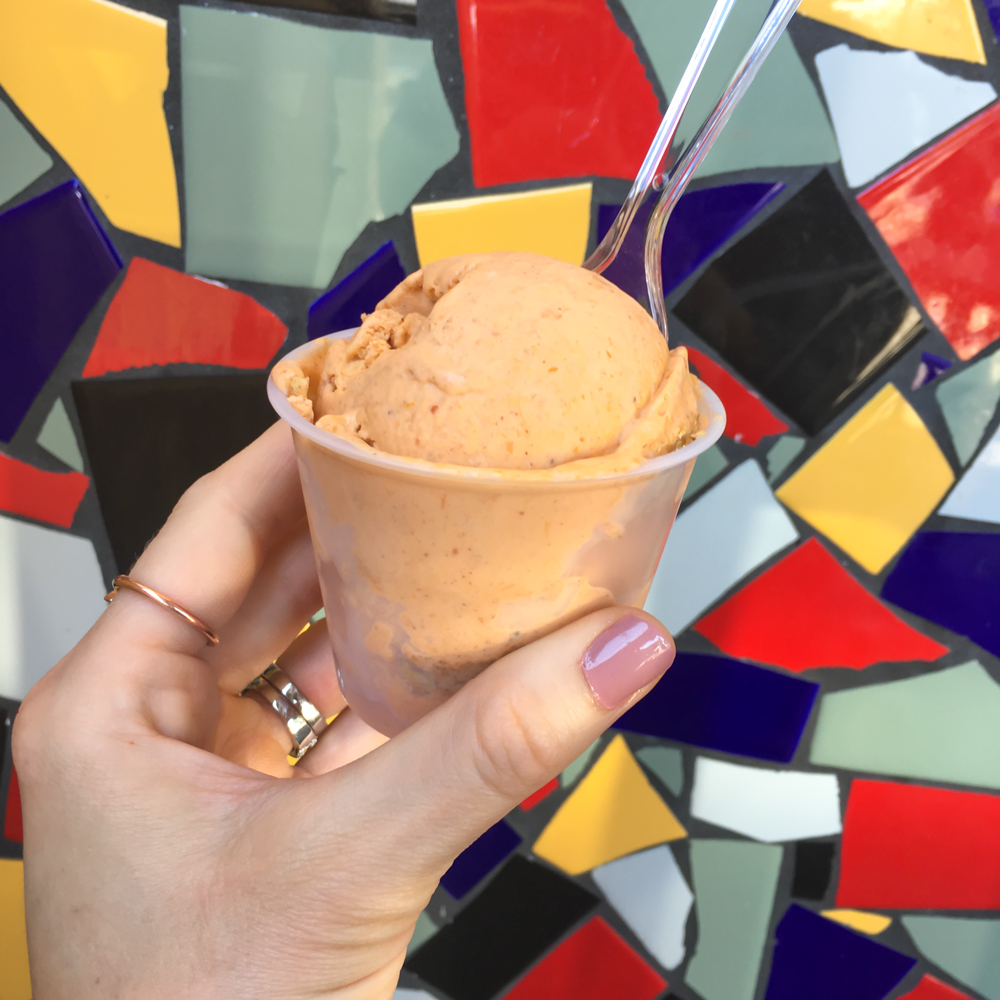 From there, we stopped by the grocery store to get fixings for tacos for dinner. And the afternoon included a nap, some work and some more time on the couch.

Perhaps one of the other highlights of the weekend was that I finally ordered and wore an actual maternity outfit. These leggings will be the only pants I put on my body outside of workout pants and pajamas for a while, I can tell you that for sure, because they are unbelievably comfy. And this top is cute, light and provides perfect coverage. This is my new happy outfit. Thank goodness, because my regular pants were getting TIGHT! And I woke up on Sunday with an ever-growing bump, so it was time for some new duds. 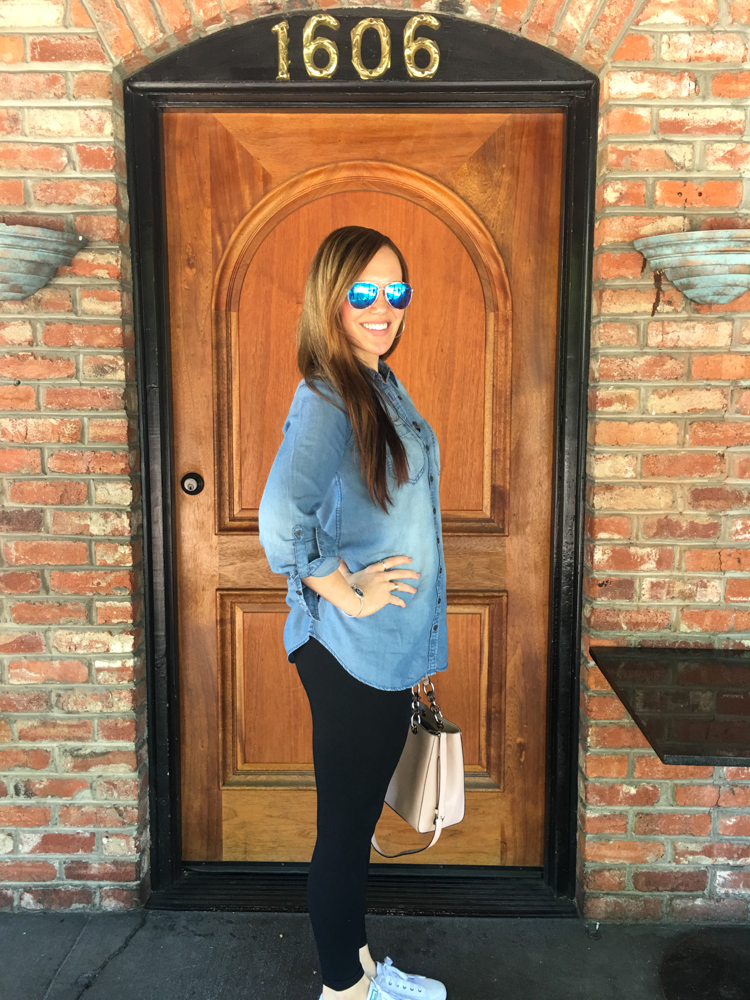 This past week of workouts was especially full, due to the multiple hours of group fitness I did on Saturday at the event. The good news is that I lifted weights three times, all of which were BODYPUMP. The other good news is that I did plenty of other moving around with power walking, barre and the addition of portions of BODYSTEP, BODYATTACK and SH’BAM at the event. Overall, I felt great most of the days and enjoyed a nice full rest day on Sunday.

Hope you have an amazing start to your week and month, my friends! Be well!

When is the last time you tried a new restaurant?