And just like that, little Brady and I have been in four states in the past two days! We flew into Chicago, Illinois, went to a bridal shower in New Buffalo, Michigan and had dinner in Michigan City, Indiana, all in the span of less than 48 hours. Wow!

We traveled to the Midwest to celebrate my future sister-in-law’s bridal shower with her family and friends. Stephanie is marrying my older brother, Matthew, in Atlanta next month, and this was our first time meeting her family in her hometown.

Stephanie and Matthew met and live in Atlanta, and they have been together for several years. Our family loves Stephanie very much, and we’re pretty darn excited she is marrying Matthew. And I can’t WAIT for their wedding! I’m a bridesmaid, and Dave is a groomsman too. 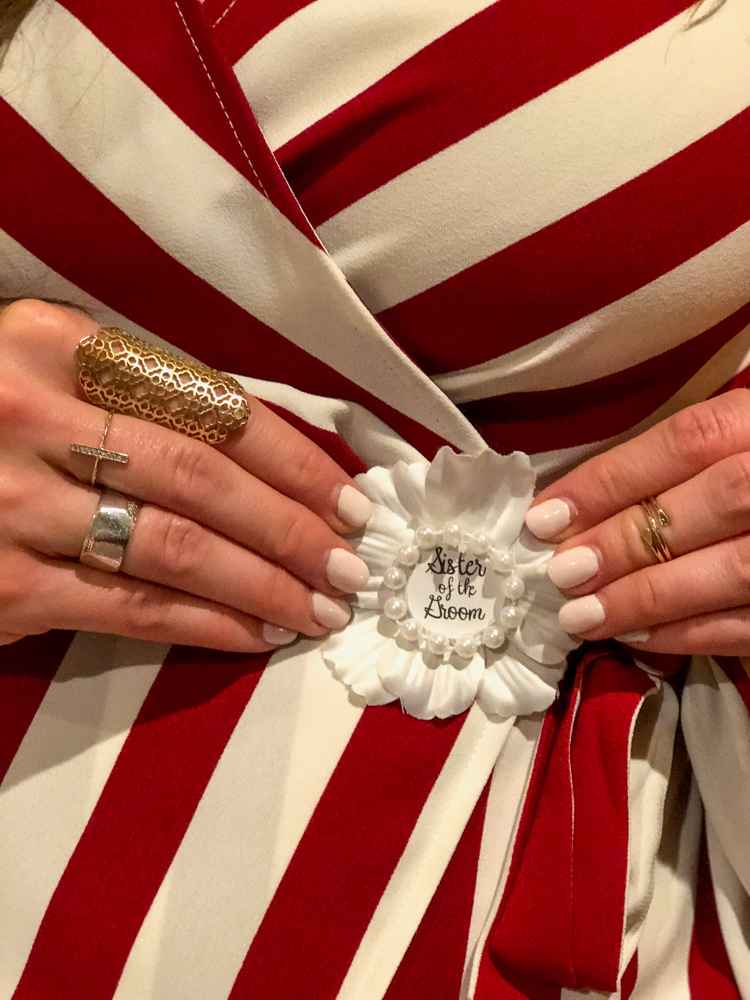 Anywho, back to the weekend. Brady and I flew into Chicago late on Friday night and met my mom there (she flew up from Southwest Florida), and we stayed in a hotel in Chicago near the airport on both nights. Brady did fairly well on the four-hour flight there, and although maneuvering around with him wasn’t easy, he was in mostly good spirits the whole flight, with a few minor outbursts. By the way, major props to parents who travel alone with kiddos. It ain’t easy. And yes, I said ain’t.

I’m also really happy we had the flying warm-up to San Diego a couple of weeks ago, so I had a better idea of what to expect, except I had Dave around for that one, and it was super short — so wayyyyy easier than my solo voyage across multiple time zones.

This trip was a very quick trip, but in typical fashion, my mom (and Brady) and I made the most of it. We ended up having so much fun in such a short amount of time — as we always do. I love my mommmma!

On Friday night, we had some cold take-out from the nearby T.G.I.Fridays (which my mom went out on her own on foot and procured for us, before we arrived in town), and then we caught up in the hotel room.

Bright and early on Saturday morning, we grabbed some breakfast from the hotel’s free spread — I used their tea and added my own stevia and collagen, then I also got a big bowl of oatmeal from the breakfast bar and a banana and added my own nuts, almond butter and coconut crisps to make one delicious and filling meal (no pictures of that, because it was ugggggly, but good). After breakfast, I went off to pick up our rental car — then we began our mini road-trip to New Buffalo, Michigan for the bridal shower at a restaurant. The drive was super easy, took less than 90 minutes and had us going through some open space and fields, which I don’t ever get to see a lot of in the busy and crowded Bay Area. Loved it!

We arrived at the shower right on time, which was super confusing, because it was actually in the Eastern time zone, whereas Chicago is in the Central time zone (and driving across time zones is not something we were used to, but we were alerted to it ahead of time so we didn’t mess things up). But nonetheless, we were immediately greeted by Stephanie’s lovely mom and sister (who both hosted the shower). From the second we walked inside, until we got back into our rental car to drive back to Chicago on Saturday night, we had the nicest time, and everyone at the shower and in Stephanie’s family was incredibly sweet to us — we felt like family already!

Here we are with the adorable bride-to-be … 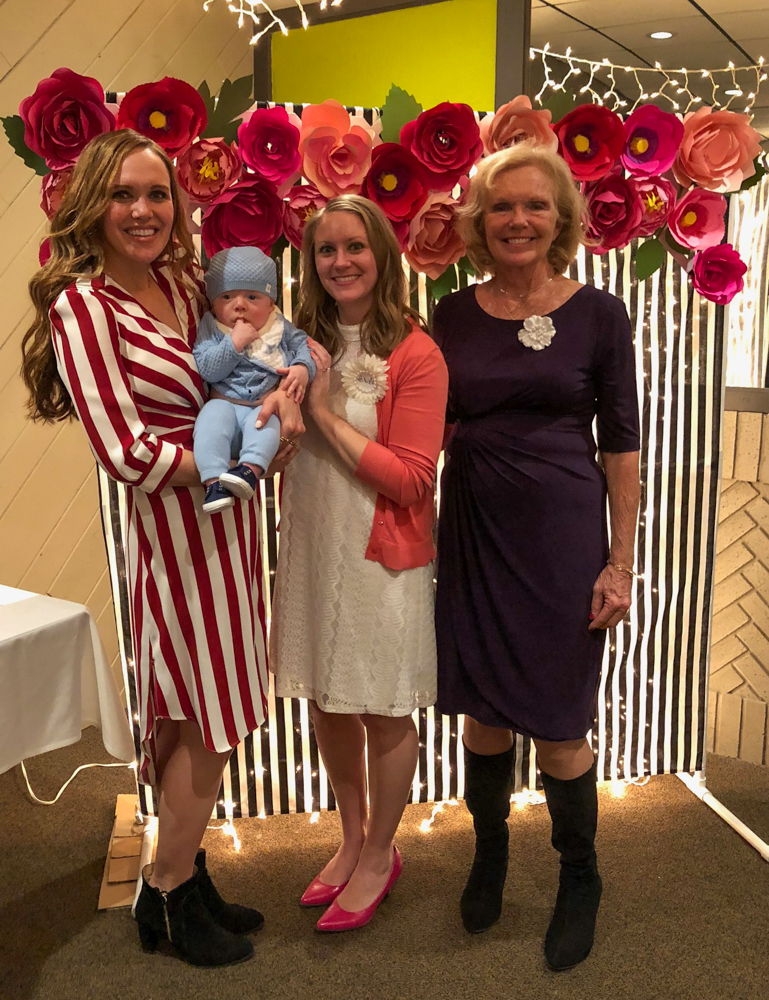 The shower itself was decorated so nicely, and we had a nice spread of lunch and mimosas, played a couple of games, chatted and watched Stephanie open a lot of gifts. It was so awesome to see her truly showered with love before the big day! 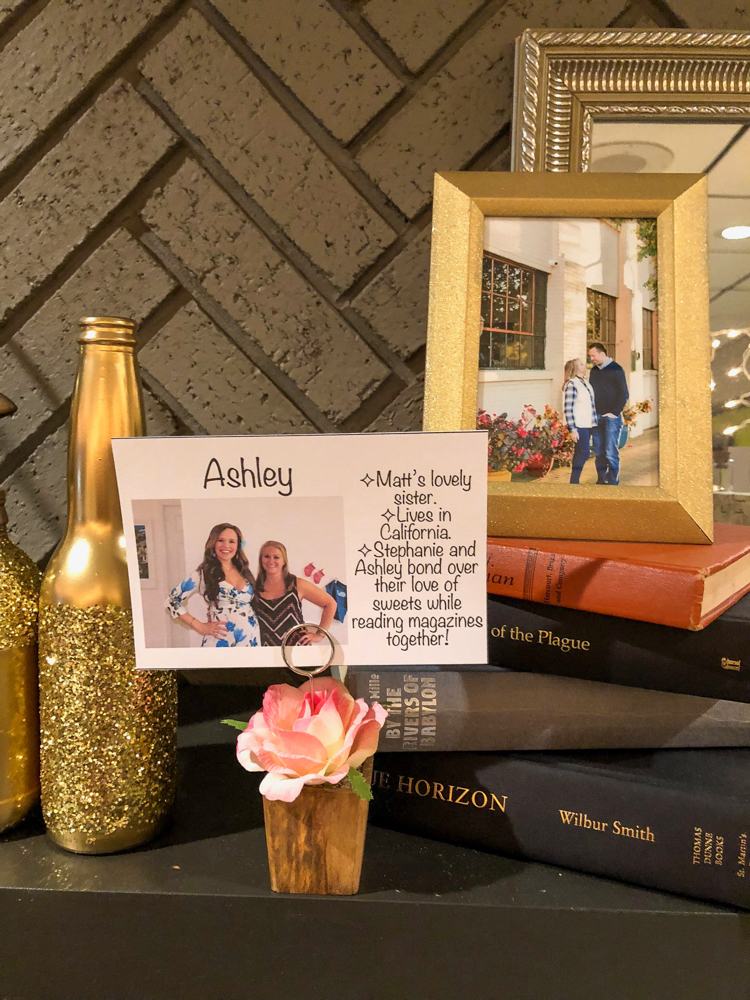 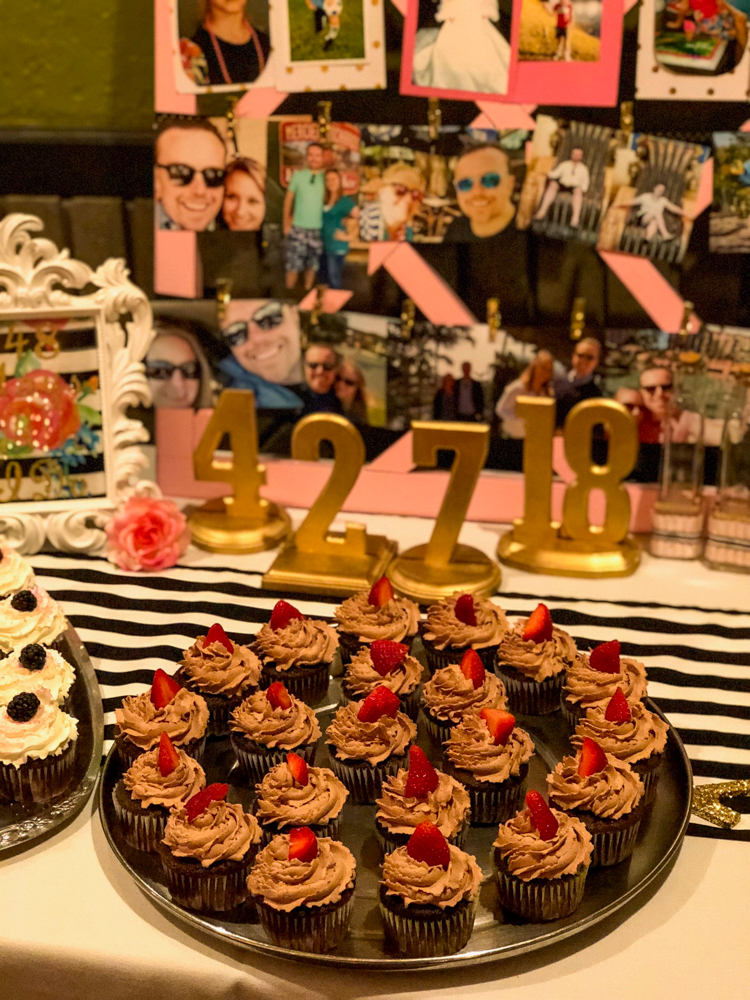 Brady was one happy camper the entire time and got passed around quite a bit, as everyone wanted to snuggle with his cuteness. Clearly he got partied out, and I came back to the table at one point to find him totally passed out on my mom. So sweet! 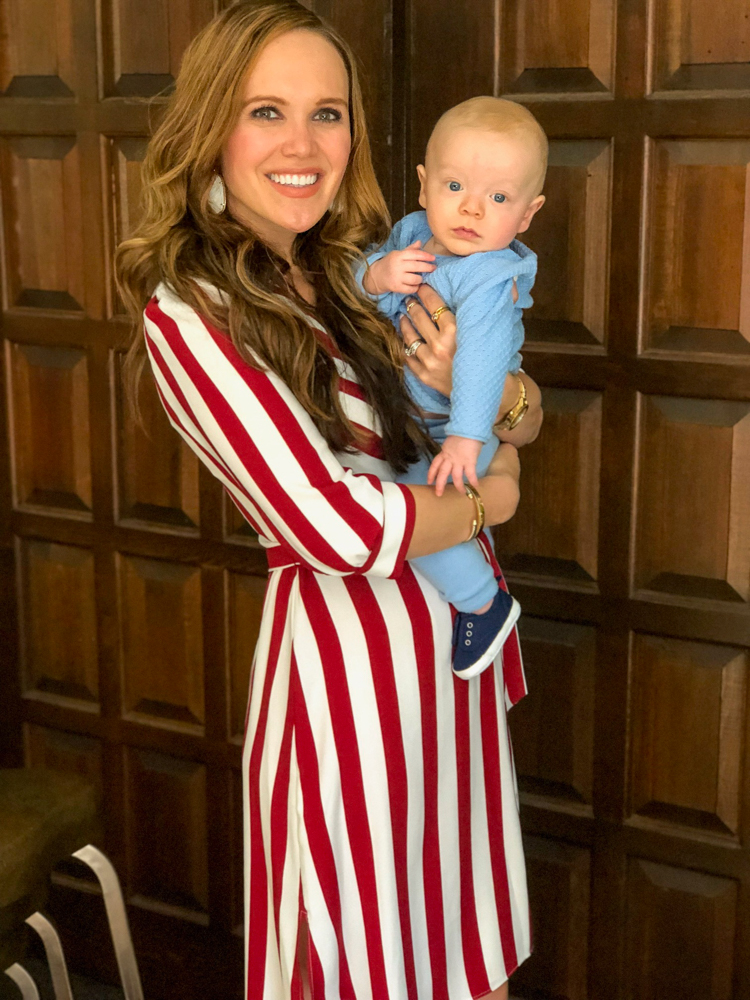 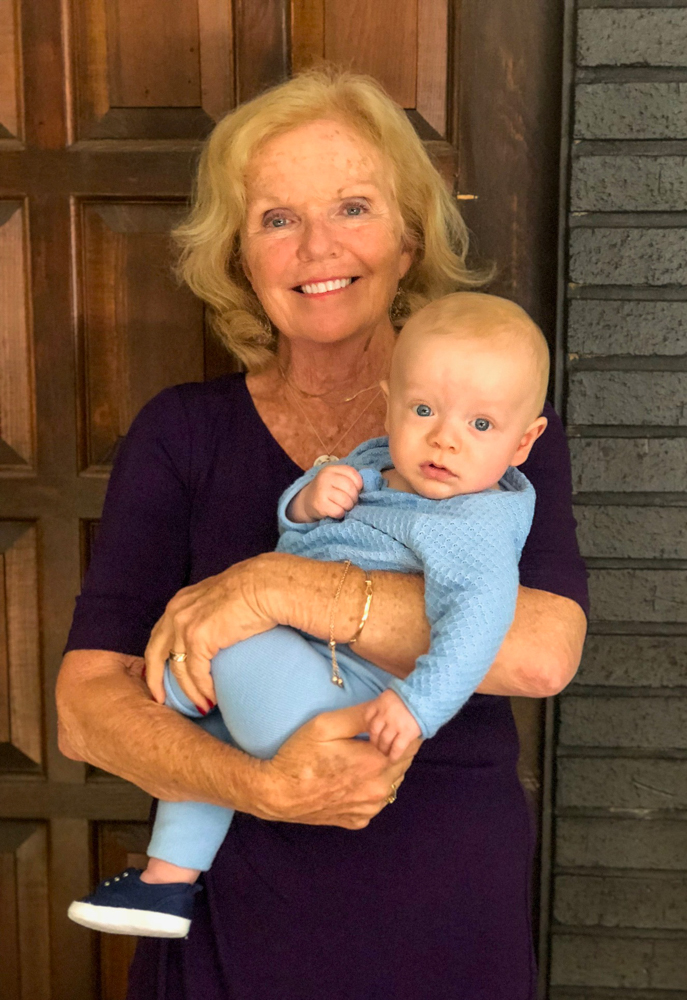 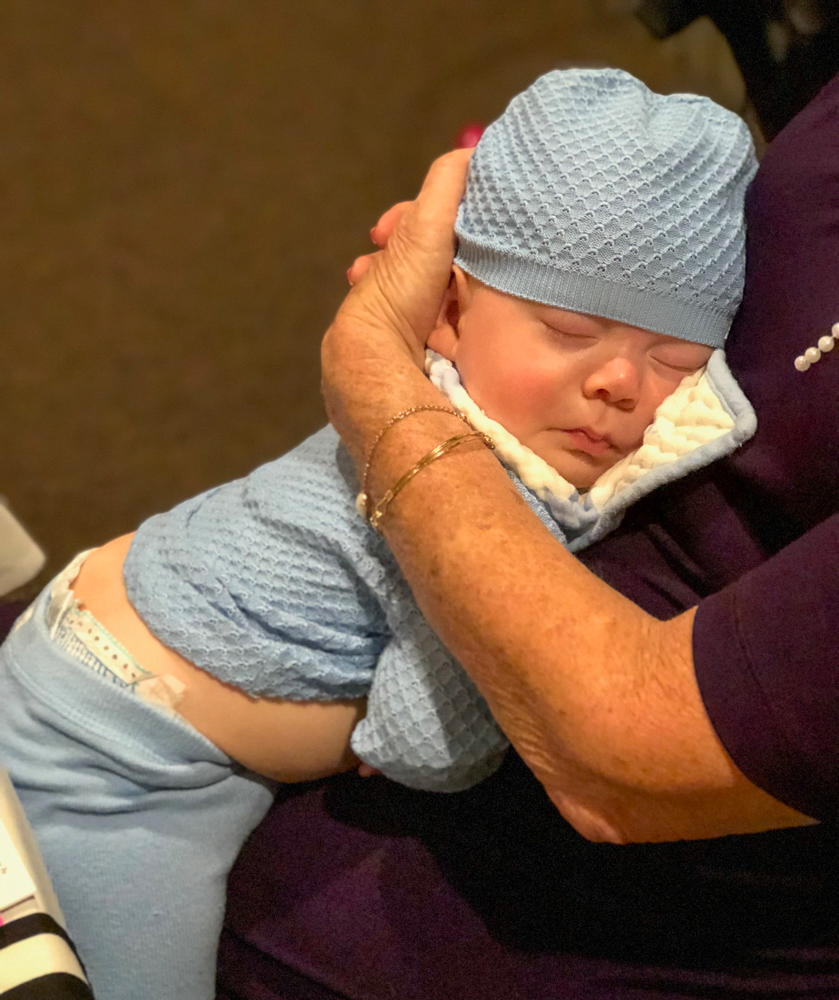 After the shower, we did a tiny bit of touring and drove to check out the waterfront in downtown New Buffalo, and then we went to Stephanie’s parents’ house in Michigan City, Indiana and had an early dinner with the fam featuring salad, lasagna and home-made pound cake. It was such a laid-back and comfortable time to hang out with them and get to know each other — but quite honestly, I feel like I’ve known them forever!

That evening, my mom and Brady and I got back into our car around 6:30 p.m. to make the trip back to Chicago, which went pretty darn quickly with zero traffic or disturbances. I took the rental car back that night (and left my mom and Brady in the hotel room, so I actually enjoyed this solo time out and about without my tiny passenger in tow hehehe), and then my mom and I sipped on wine, dug into some chocolate and looked at dresses online for the remainder of the evening. Good stuff! Before we knew it, it was midnight and well past our bedtimes.

Truth be told, I didn’t sleep very well in the hotel at all either night, due to the time change and travel and everything else. And we had to be up super early, in addition to springing forward on Sunday morning to head back to the airport. So although this weekend was a really fun and special adventure, it was pretty tiring.

Unfortunately, my flight home with little Brady wasn’t very fun at all, as it was incredibly full, and Brady was ready to get off the plane about an hour into the more-than-four-hour flight, so I was VERY happy to land back in Oakland and see Dave (and Rudy) waiting for us at baggage claim. I needed an extra set of hands, ASAP!

Brady had some major fussiness and only fell asleep for two, 20-minute segments, which was not exactly ideal. I was fairly frazzled, but couldn’t get mad at him, because he was so darn precious, in spite of his grumpiness. He also made some friends on the plane, and a nice man tried to entertain him with peek-a-boo for a while too. Thank you, strangers. Thank you! 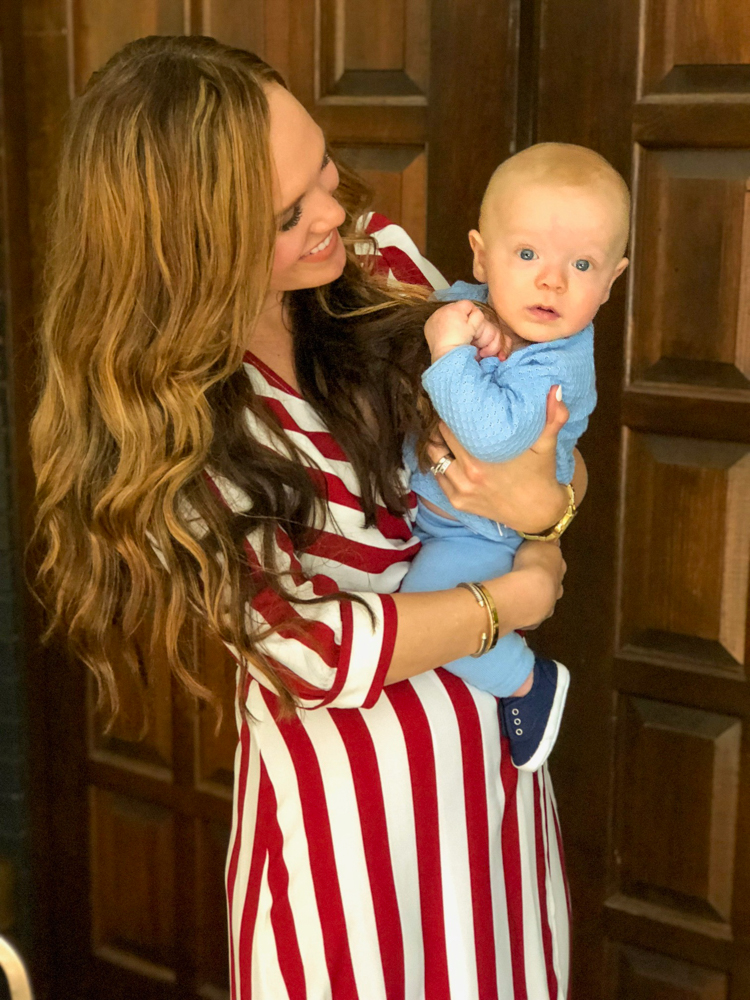 (Here’s my dress, which is a recent purchase just for this occasion.)

Sunday was spent unpacking, doing laundry, getting organized, treating myself to a fresh manicure, pizza from the pizza oven and writing this blog post! It felt good to be home, but boy, I sure would have liked to have stayed a little longer with my momma. Oh well. Weekend complete!

Moving on, as we do on Mondays, let’s look at my workouts from the past week … 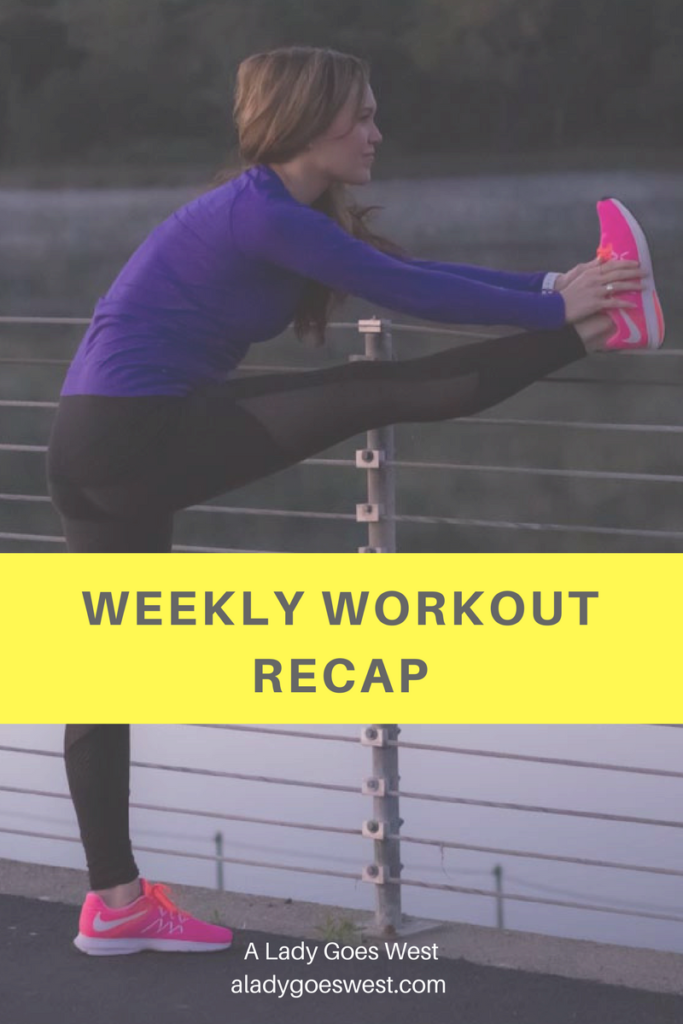 Last week, I decided I needed some yoga in my life, so this past week, I found a yoga/barre workout from POPSUGAR and completed it, and it felt great. While I do plenty of stretching in between sets during barre workouts, there’s nothing like a few yoga flow sun salutations to make you feel loose, open and mobile. Yay for yoga!

This past week was a bit lighter than usual with my two full rest days and travel, but I got in some diverse movement throughout the other days, so it’s all good — although I did fall short of my goal of three big resistance sessions. By the way, I’m thinking of switching up my workouts, and there’s more to come on that soon!

Have a GREAT start to your week, my friends!

What time zone do you live in?

Where was the last place you traveled?