I have to admit, I have not always been the biggest yoga fan. In fact, there have been times when I have flat out despised it.

However, as a group fitness instructor who now teaches more than five or six intense classes a week, my body has come to crave yoga.

Until today, it had been almost five months since I last attended a yoga class. And just one hour later, my limbs are already thanking me.

I’ve had some interesting yoga experiences thus far in the City of San Francisco, including a touchy-feely session at Urban Flow and a sweaty session at Bikram Yoga North Beach.

Today’s hour-long Iyengar yoga session was not sweaty, nor touchy-feely, but it was just what the doctor ordered.

I attended a lunchtime class at Bay Club Financial District (which is the gym where I teach early morning BODYPUMP one day a week).

For those of you who haven’t tried Iyengar yoga, it is a type of yoga that is open to beginners and offers a good place to start your practice. Although, you can also take advanced options if you are further along in your yoga journey and still get a lot out of it.

What makes Iyengar different from other types of yoga is the use of props and the focus on alignment of the body, rather than movement. The list of props can include foam blocks, straps, blankets, towels or even roll-like pillows, which help you get your body into better positions to get the most out of each pose. The official Iyengar website explains a prop “helps the practitioner to achieve perfection in all the postures.” Poses are typically held a bit longer than other types of yoga as well.

Here’s what a typical Iyengar yoga setup looks like. Today, mine was super colorful. 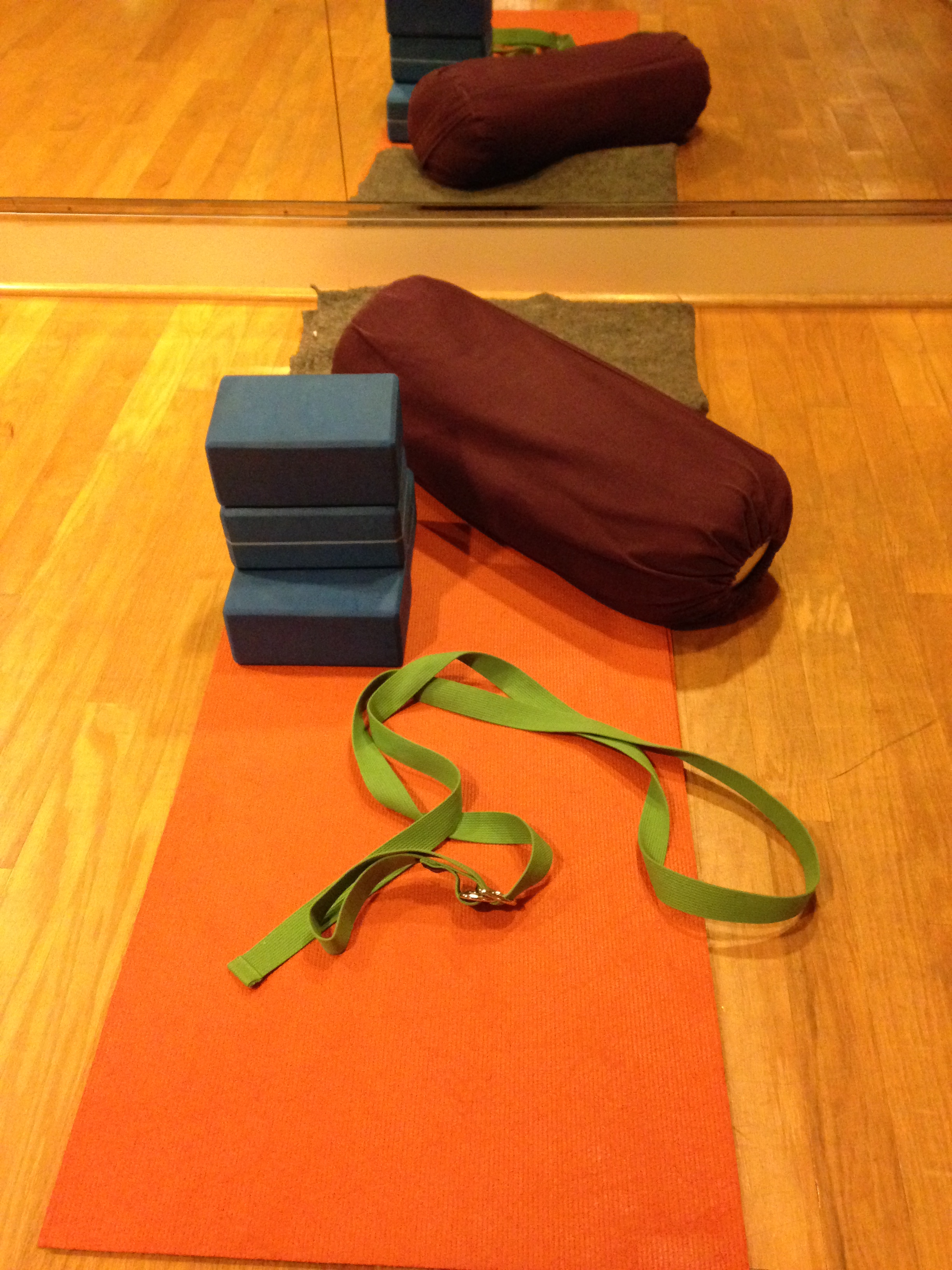 Today’s instructor was a good one, who I had taken class from before. I had attended a few of his Vinyasa yoga classes at Bay Club and always liked his style (which is so very important in a class like yoga). My favorite form of yoga, Vinyasa, is a practice in which you move more vigorously from posture to posture, raising your heart-rate and using a certain rhythm of breathing. I prefer Vinyasa, because it makes me feel moments of fatigue and spikes in cardio, while still getting the benefits of stretching and the meditation at the end.

Although I’ve selected a favorite type and have dabbled in yoga here and there over the past couple of years, I would still consider myself an intermediate yogi at best. Therefore, I like it when the teacher corrects my postures or offers individual help to get me exactly where I should be.

Before class began today, the teacher asked if anyone had any areas they would like to work. As any Les Mills BODYPUMP instructor would, I requested some extra attention to the hamstrings (thank you to the hundreds of weighted squats and deadlifts I perform each week). Toward the second part of class, we focused on hamstrings for several minutes while using the green strap shown above.

During the course of class, I felt my muscles relax and the tightness ease, and that was such a wonderful thing.

But perhaps the highlight was the instructor’s tidbits of narration, which always makes the class. For instance, during a particularly challenging triangle posture, the teacher said in a mellow and soothing voice …  “hug your muscles to the bone as you exhale.” It’s a strange thought, but it works.

Oh, and I can’t forget to share that he also had tiny finger-symbols, which he tinged as we meditated during the final moments of class … just one of those things that makes it hard to get into yoga, and then once you do, you can totally appreciate.

Here I am post-class: Light, relaxed and ready to take on the rest of the day (while at the same time hoping no one walks around the corner and sees me taking a picture of myself in the mirror!) 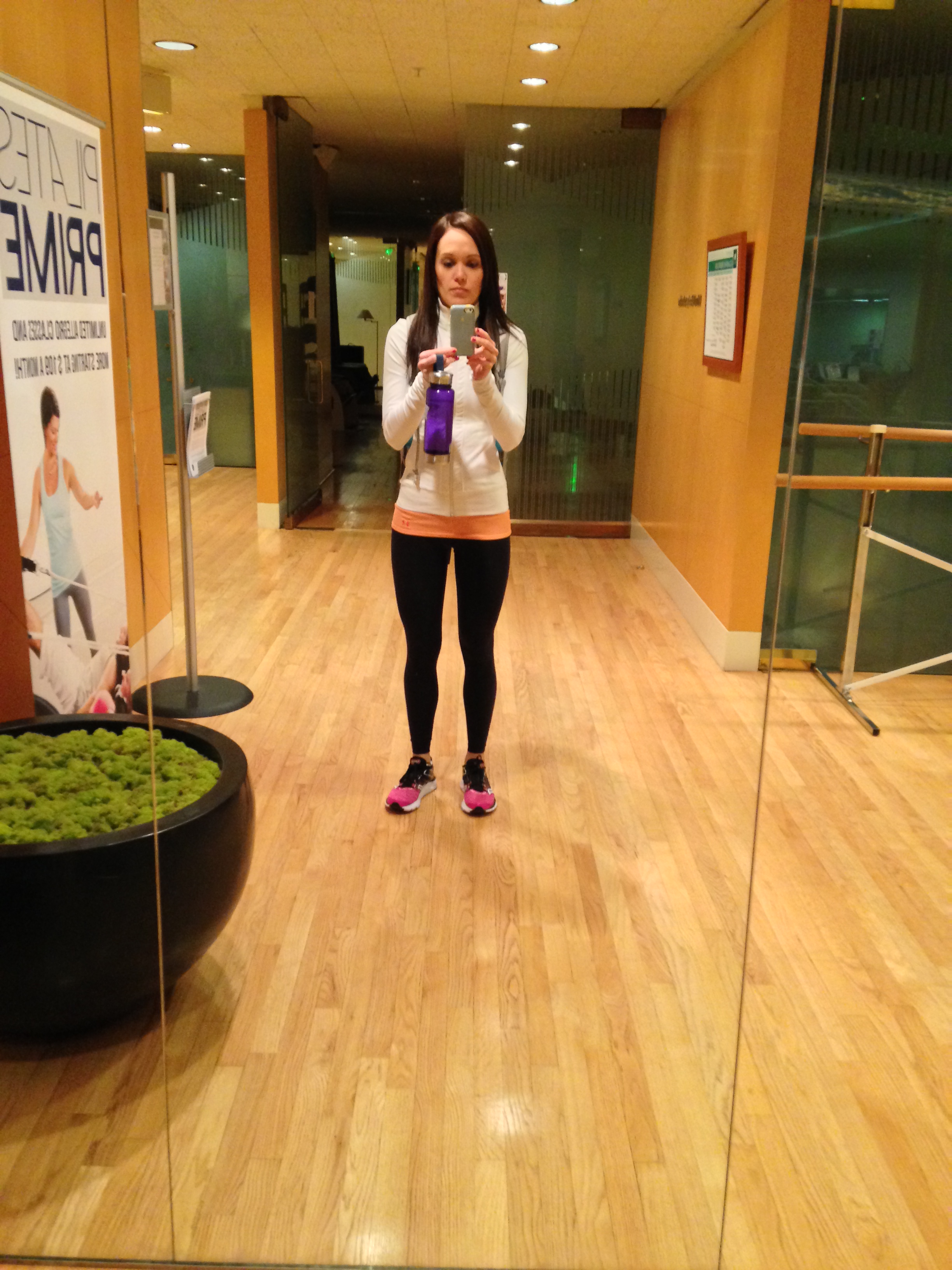 From here on out, I absolutely plan to add a yoga class into my weekly rotation. Not only do I have the ability to attend so many excellent classes at local gyms for free as a group fitness instructor, but also, my mind and body come out noticeably improved with each session.

And might I mention that walking the inclines of the Nob Hill neighborhood is so much easier with loose legs.

I'm a writer, trainer, group fitness instructor, new mom and foodie, and A Lady Goes West is where I share my healthy lifestyle, simple meals, fitness tips and experiences living in the San Francisco Bay Area.


When everything is a little bit sideways, sometime

New hat, new cert, same me. But for real: I learne

Current weekend plans. Throughout all of this craz

Throwback to the last time I put on jeans and anim

Literally over here going with the flow. As everyt

Motherhood is a natural workout, I tell ya. Instea