This week I visited Mint Studios in the SoMa neighborhood to try my hand at the Pilates Reformer machine, thanks to my membership with ClassPass.

The Pilates Reformer is a bed-like contraption with a movable carriage, adjustable resistance and even a detachable jump-board for the feet. The machine allows participants to go through stretching and exercise moves lying on their back without ever standing up, thus there is less pressure and impact on the joints. Originally used for rehab work, today Pilates Reformer classes are more advanced and even involve cardio, like the one I took this week.

These are the Pilates Reformer machines at Mint Studios. 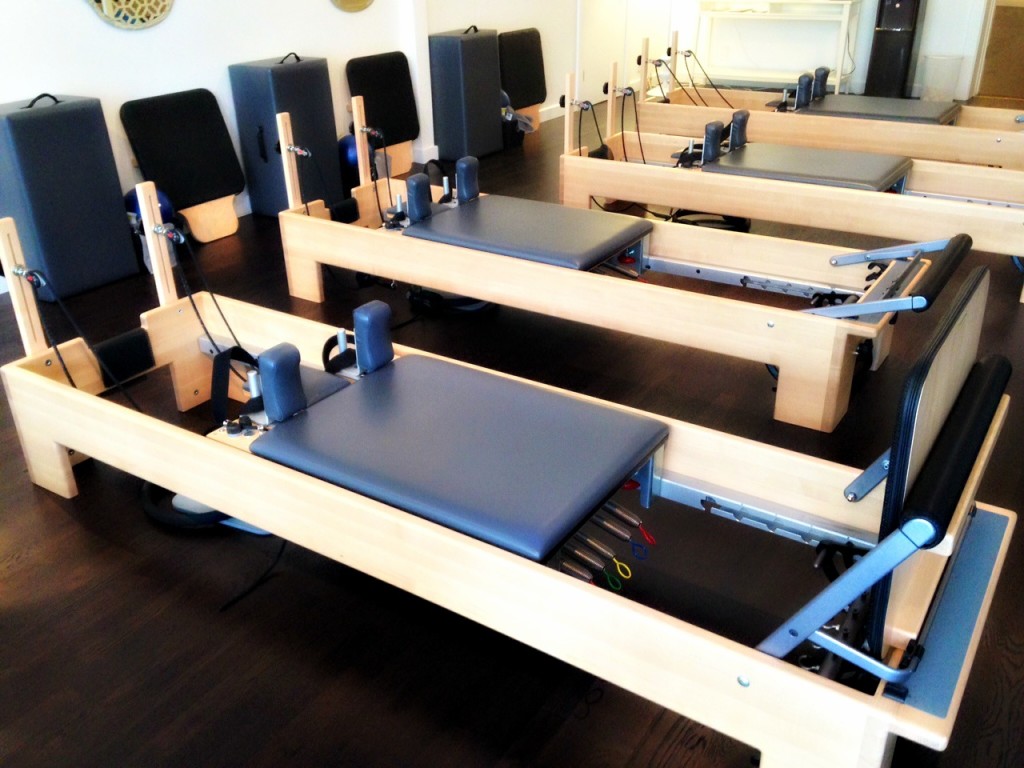 But let’s back up. First of all, what exactly is Pilates?

It’s a form of exercise, apparently named after Joseph Pilates, who created the practice in the 1920s.

Pilates is a system of over 500 controlled exercises that engage the mind and condition the total body. It is a balanced blend of strength and flexibility training that improves
posture, reduces stress and creates long, lean muscles without bulking up. Pilates works several muscle groups simultaneously through smooth, continuous motion, with a particular concentration on strengthening and stabilizing the core (the abdomen, back and
pelvic girdle region, sometimes referred to as the “powerhouse”).

It’s different from yoga, because the moves are repetitive and mostly involve lying down. Yet, it’s also in the mind/body realm.

I’d only ever taken one Pilates-inspired class before, so was pretty much new to the whole scene when I arrived at Mint Studios for the Cardio Sport Pilates Reformer class.

The studio at Mint is adorably small. It’s located on a busy street in the industrial SoMa neighborhood of San Francisco. I showed up about 20 minutes before class and even beat the receptionist and teacher. There was nobody in the studio, so I stood outside the locked doors for a couple of minutes. 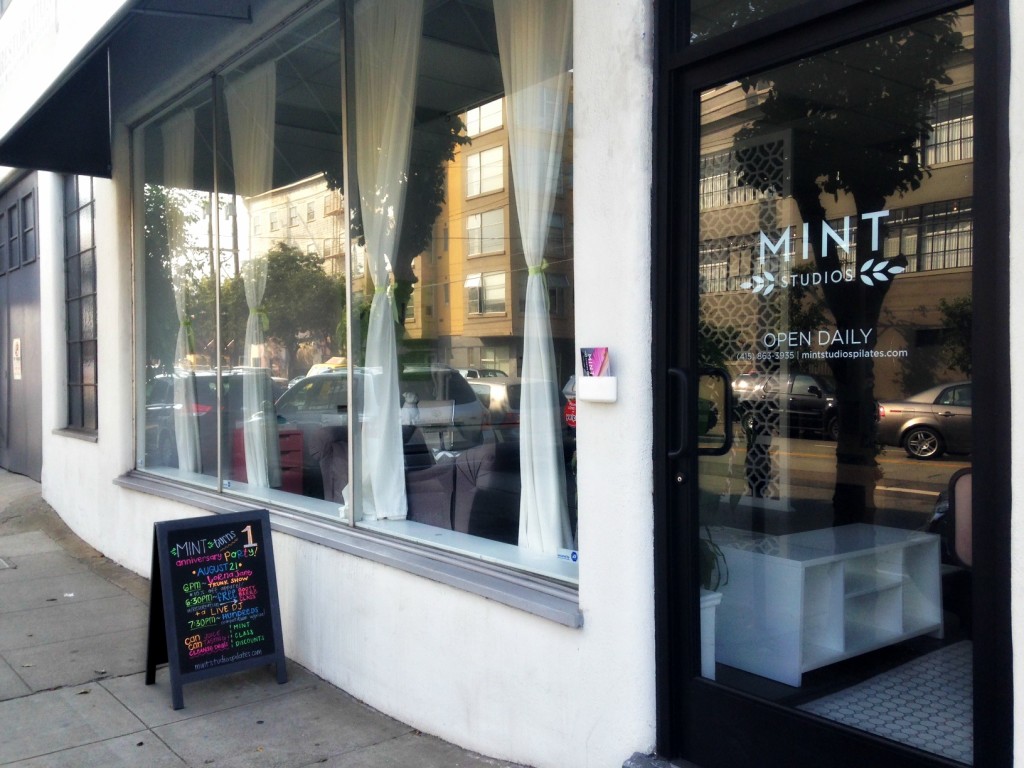 Once the friendly receptionist (who is also a teacher at the studio) arrived, she welcomed me inside.

As I could see from the window, the entire studio includes a lobby, a handful of Pilates Reformer machines, a small dance-room and a bathroom. You can see the whole place from the front door. 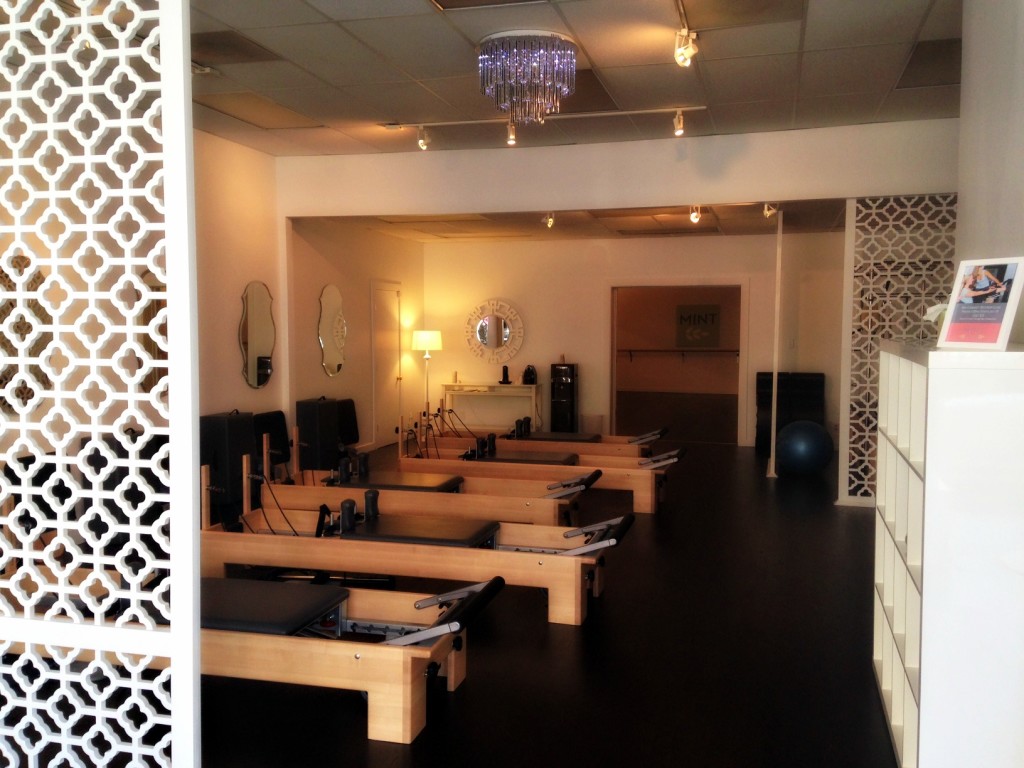 As you can see, it was decorated straight from a feminine mint-colored Pinterest board. I was told that the owner chose the color scheme based off her own wedding when designing this dream studio. She used to work out of her home, but business expanded enough just one year ago to open a full studio.

It was a true “private studio” experience, in that there was no one else in the place except for those of us taking class, and the receptionist took the class too. I loved this aspect of it, because it felt so laid back and comfortable. As someone who spends my full-time fitness career in huge corporate gyms, it’s a nice change to see the boutique side of fitness, which also has its value. It’s personal.

The instructor of the class, Gaby, was friendly, bubbly and did a great job leading me and the two other participants through the class.

As a group fitness instructor and trainer, I tend to be very particular about class experiences. Gaby was sure to explain set-up, proper form and execution of every single move, so she gets a passing score from me in that capacity.

It had some cardio in the beginning, then moved into muscle strength endurance.

It started with us standing next to the machine doing a full body roll-up and ended that way too. The 50 minutes of work in-between was done entirely on the Pilates Reformer machine.

We began with about five minutes of jumping continuously off the jump-board, while laying on our backs and moving the carriage back and forth away from the board with our feet. While it seemed easy at first, it began to burn. We did double-leg and single-leg jumping which had my quads completely on fire (not to mention, they were already sore from the previous days heavy weight-lifting session).

Then we went into some crunches, then we picked up a two-pound weighted ball, which we used with our arms extended for some light arm work. We also pulled on the Reformer machine’s handles for some rowing motions. The class incorporated several props, including the small weighted ball, a small Pilates ball, as well as a box, which we placed on top of the Reformer machine and put our chest on for some back extension work.

There was some light music playing in the background and the instructor was pretty clear with us what was coming up next and how many reps we had to do for each side. She walked around the three participants and continued to correct our form. She used our names and connected with us very well.

Here I am with Gaby, the instructor. 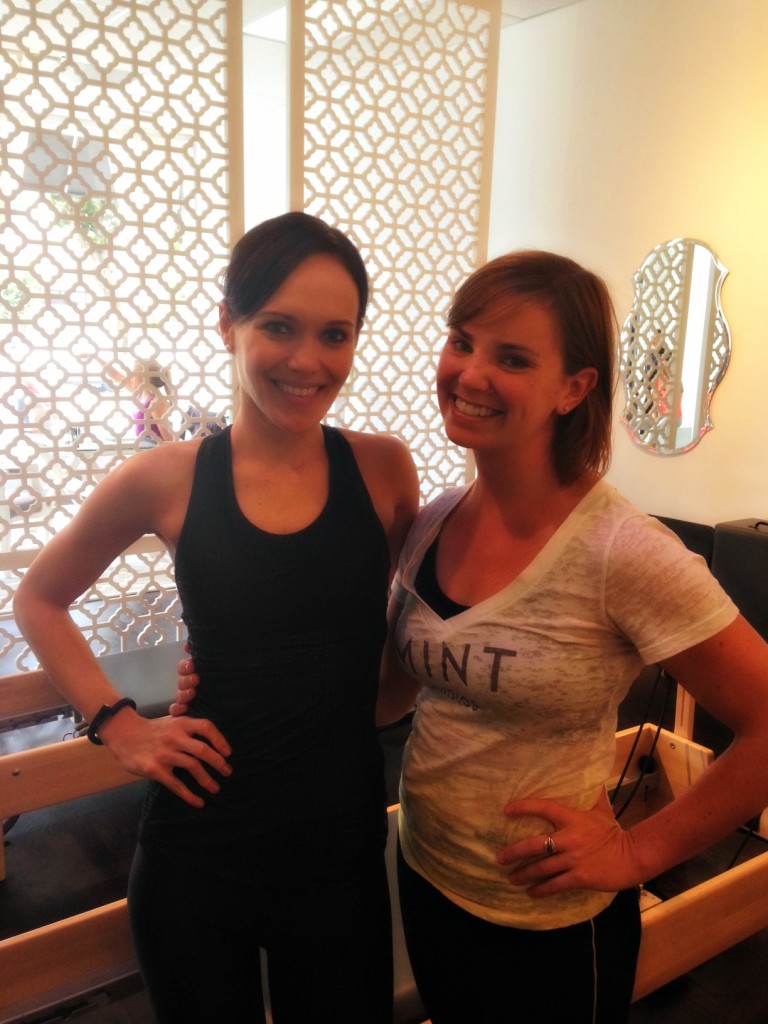 Oh how I just can’t seem to take a normal post workout picture, but alas, needed to show a shot of Gaby’s smiling face …

Overall, it was a totally different workout than I am used to. Not only had I never been on a Pilates Reformer machine before, but I had never really done a full Pilates class either. I had to continually readjust my body to make sure my form was right, because the movements were foreign to me. The small movements, isometric holds and repetitions of every little move definitely make your muscles burn. However, it’s different than a heavy-weight training burn. Outside of the leg-jumping portion in the beginning, I didn’t feel truly exerted throughout class, like I do in my own workouts or classes. Yet I knew I was working and benefiting my body.

Pilates is known to give people long and lean physiques, which is probably why it’s so popular for celebrities and models to work on the Reformer machine. It’s not designed to build big muscles, merely provide length and tone to a body. It’s definitely not grueling and intense, but offers a challenge.

The class went by quickly and without breaking a sweat, I felt good at the end.

As for me an my Reformer Pilates career, I don’t know that I’ll become a regular, but I’m up for trying again. Especially in the comfort of an adorable private studio like Mint.

* Disclaimer: I attended the class at Mint Studios for free, as part of my complimentary one-month membership to ClassPass. Learn more about the ClassPass program in San Francisco in my post about the service.

Have you ever taken a Pilates class or tried the Pilates Reformer machine? Do you have a good workout planned for the weekend?