Healthy toddler eats coming at you today! It’s crazy to think that my little human was a terrible eater when we first introduced solids to him at around 6-months-old and for the first few months after that. He didn’t want to eat anything at all, and it totally stressed me out. Well now, at just under 2-years-old, things are much easier. In fact, he can ask for the food that he wants by name and is quite a little eater, which I love to see. (But of course, we still have our occasional mealtime messes and meltdowns, so don’t think everything is easy peasy over here. There’s always some food left on the plate and a lot on his face and on the floor too.)

While I’m not a registered dietitian or nutritionist, I am a mom who likes to feed her son mostly healthy food that he enjoys, and that food has to be super simple. You see, even though I eat most of my meals at home and like things healthy, I don’t cook many “original recipes” if you will, I mostly just assemble things — so that’s how Brady eats too. Maybe one day I’ll change that? But for right now, the less time in the kitchen for me, the better.

Also, I don’t know if your kids usually eat what you eat, but I’m here to tell you that Brady and I eat pretty similar food. We share food often, and he’s sort’ve like a little mini me, always asking for whatever it is that I’m having.

I thought it would be fun to see some of his favorite foods currently at almost 2-years-old.

Here are a few of his favorite foods … and as a note: this is NOT an exhaustive list of everything that Brady eats, but it’s his most popular food right now. He definitely gets more variety throughout the week when we try new things, but also likes to stick to his staples. 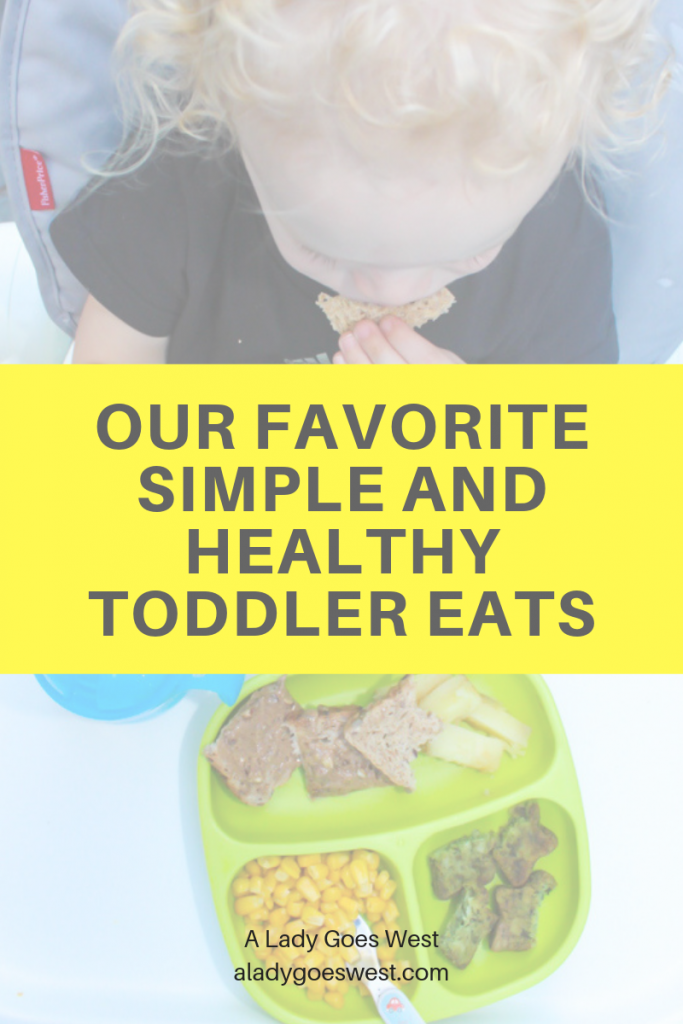 The apple doesn’t fall far from the tree. And the reason that a banana covered in almond butter became Brady’s breakfast is because I’ve been eating this for a long time, and he kept wanting to steal bites from my plate. Thus, now he gets his own full-sized banana sliced-up with lots of chunky almond butter on it. This sweet only child usually gets to eat this breakfast on my lap outside or while reading a book with me. He’s got it good, I tell ya. 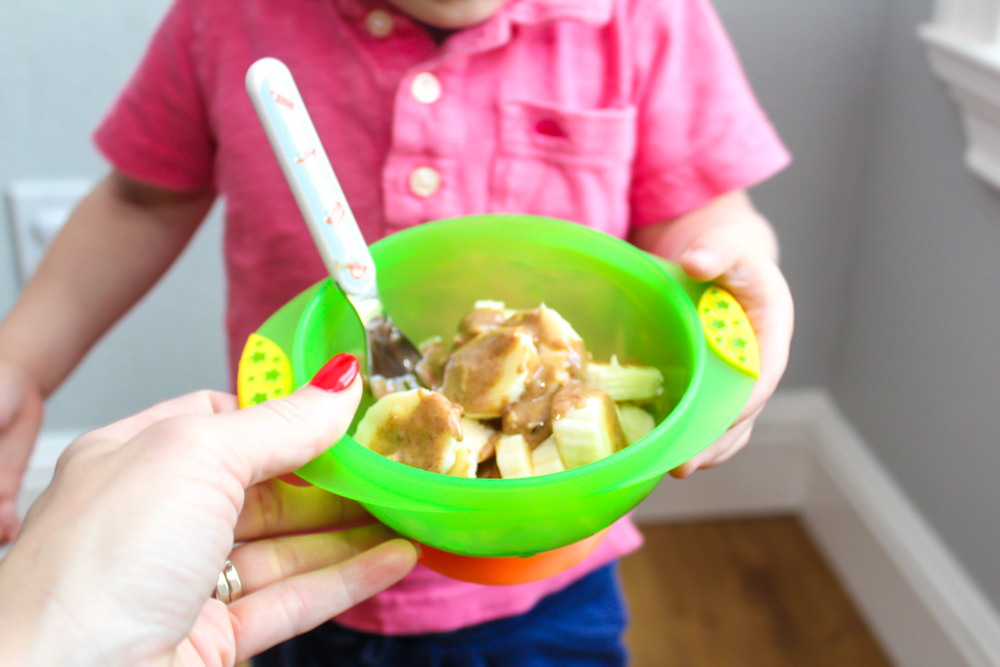 If you’re wondering if Brady gets cow’s milk, yes, he does. Brady still gets three bottles of organic whole cow’s milk a day, clocking in at about 20 ounces total. He loves his milk and has it when he wakes up, before nap and before bedtime, but we’ll list it under breakfast for now.

Lots of great protein in “oggie,” which Brady calls it. He feeds himself with a spoon and typically has yogurt with lunch or dinner. It’s a messy experience, but so cute to see him work so hard.

It’s funny that I’ll call blueberries his favorite, because every now and then, Brady has a few days in a row where he doesn’t want any blueberries at all and is offended that I even offer them to him. Then the next day, he wants to eat the whole carton. I always buy organic berries and wash them up before giving them to him.

The sweet potato can do no wrong. I bake up a few huge white or orange sweet potatoes at the beginning of the week, and Brady likes little chunks of the inside with his dinner. He doesn’t eat the skin, but I guess I’ve never tried giving it to him with the skin on, I really should, because I love the skin. I always buy organic for these. 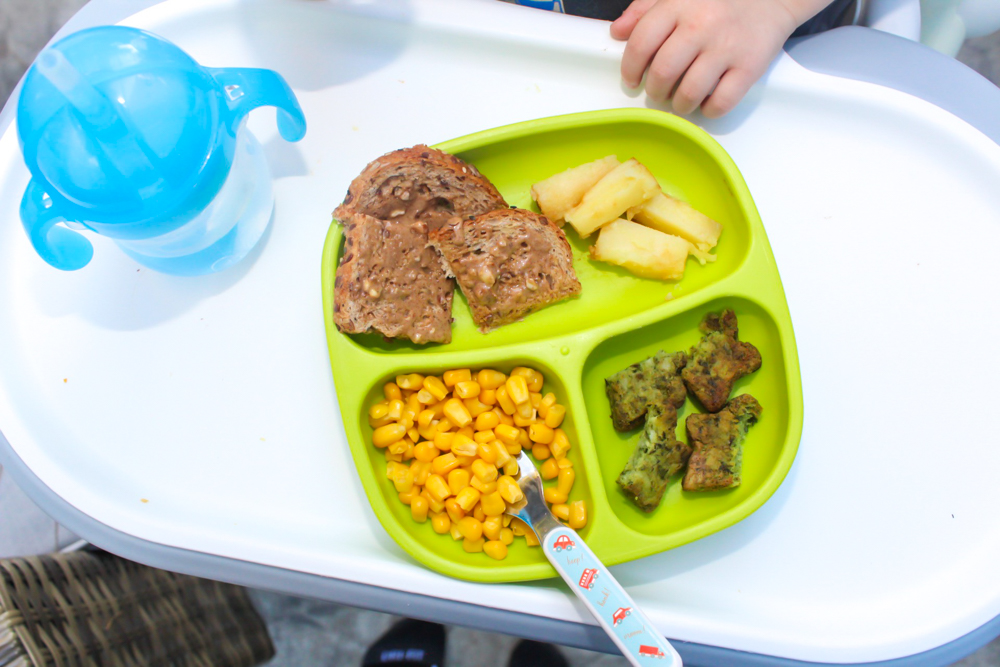 We buy loads and loads of boxes (not cans) of organic no-salt black beans from Whole Foods, and that’s because “beebees” are a hit around here. I know some people rinse their beans, but I don’t rinse them (it’s said that rinsing beans makes them easier to digest, not to mention, much of the sodium is in the liquid in the can or box). I have never rinsed them, but I do remove the liquid, so he only gets the bean part on his plate. Sometimes he uses a fork or a spoon, but oftentimes, beebees are a finger food with dinner. 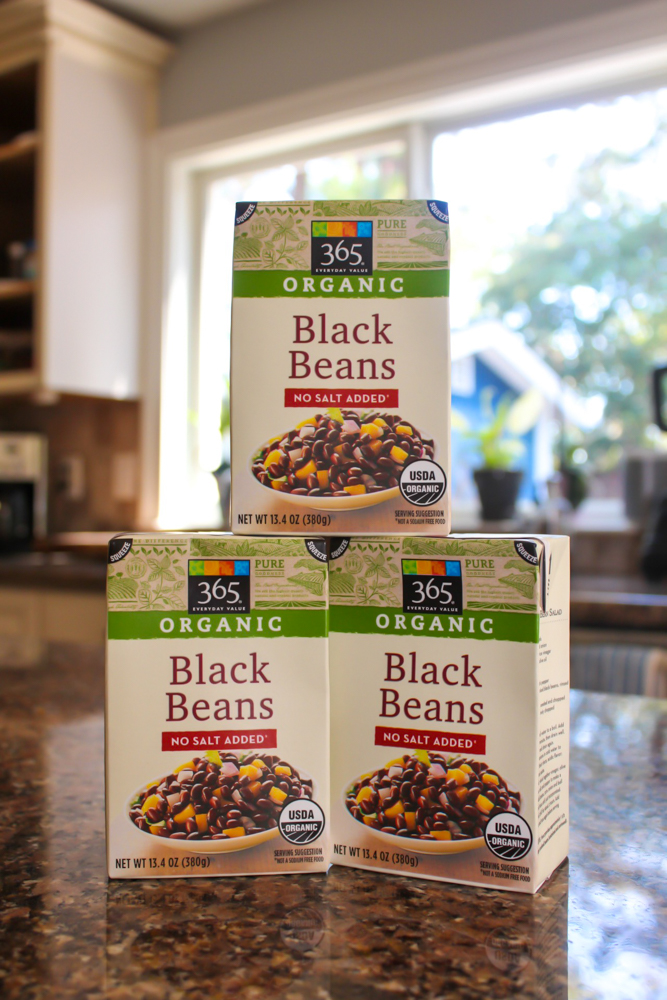 Here’s where we differ, because I don’t actually like peas or corn, but Brady does. I buy bags of organic frozen peas and corn, and all I have to do is defrost them, and Brady likes to eat these cold with dinner. So simple!

Avocado is another hilarious word that Brady says, “aco.” He LOVES avocado, but honestly, doesn’t get it every single day. It’s more of a weekly thing ehehehe — because avocados are so expensive, and I’m always holding on to them for our own dinner, not Brady’s. Nonetheless, he gets SO excited about avocado, and he eats it plain. I don’t always buy organic avocados, in fact, usually conventional. Because the skin is so thick, I don’t worry about the meat inside.

Dave and I eat pizza for dinner every Sunday night, and most of the time, it’s a homemade pie, with fresh and delicious ingredients, like marinara sauce, mozzarella, organic bell peppers and lots of basil leaves (or we buy the frozen Home Run Inn cheese pizza from Sprout’s). There are usually two slices left, so those slices become part of Brady’s lunch or dinner during the first couple of days of the week. He LOVES pizza and looks forward to it. Me too, bro, me too. Because the pizza that we eat is pretty clean, I don’t think of pizza as bad in the slightest (this is not Domino’s we’re eating, folks), so I like Brady to enjoy it too.

A carb lover, much like his parents, Brady likes to munch on little bites of whole grain toast with his meals. He shares Dave’s Dave’s Killer Bread, and eats his bread plain or toasted with a little peanut butter on it.

Brady and these veggie burgers have a love/hate relationship. He ate a few almost every single day for months upon months, until one day he didn’t want them anymore. We took a break for a few weeks, and then he liked them again. Ohhhh these toddlers. Nonetheless, I think these veggie burgers (they come in all sorts of flavors) are a great and easy little part of a lunch or dinner for little ones. The ingredients are pretty good (not super clean, as they have canola oil, which is not the best oil), but overall, a convenient item. 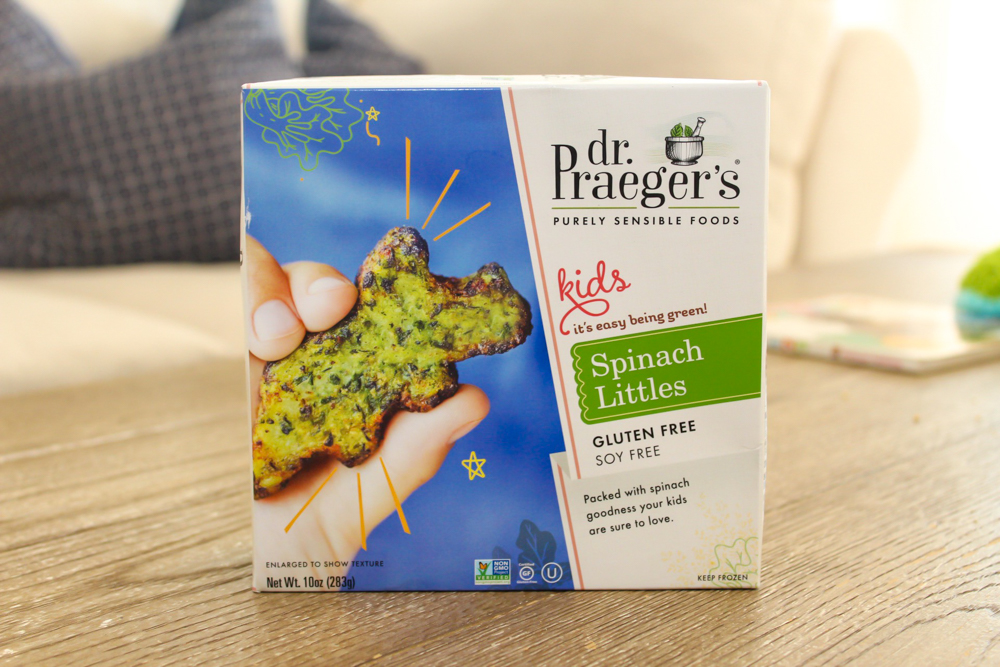 It’s no secret that I am a huge Larabar fan, and so when it was time to let Brady have a bite, I was excited to see that he is too. But here’s the thing: I only give Brady two of the flavors of Larabar, because they have the cleanest and most minimal ingredients. He gets Peanut Butter Cookie (ingredients include dates, peanuts, sea salt) or Cashew Cookie (ingredients include cashews and dates), and don’t you know that those two happen to be my favorite flavors too. We buy these in massive quantities at Target, where you can usually find the bars for around $1 each. Brady loves to run up to the pantry and say “bahhh,” which means bar. 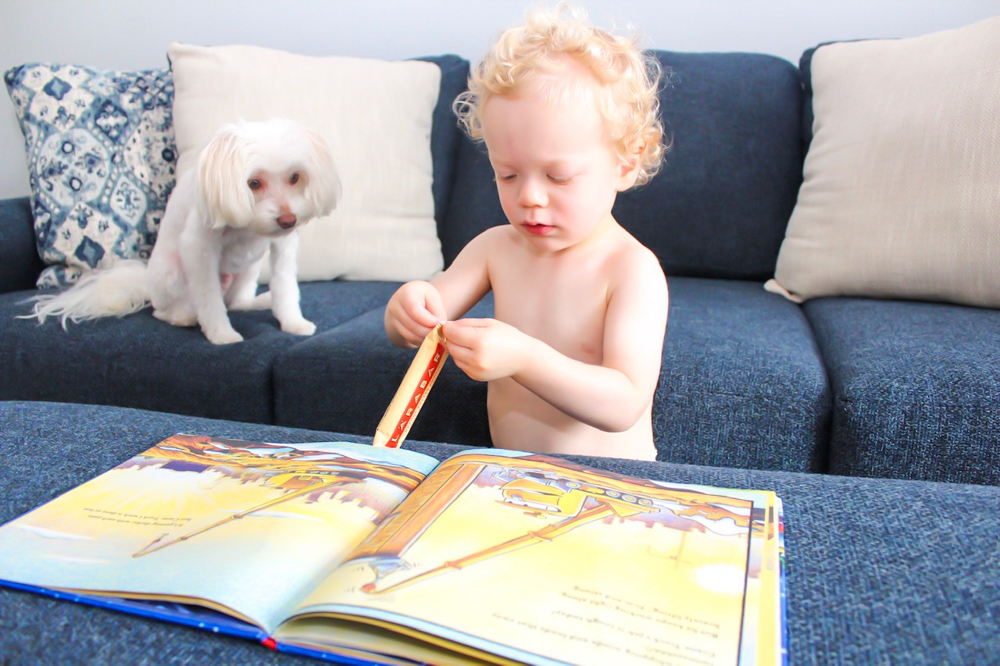 I don’t really buy a ton of Brady “kid food” if you will, always avoiding the packaged kid snacks, but these little crackers are just so cute. The best part is that Brady calls all crackers “kookies,” and so that’s what these get called too. The ingredients are pretty good, and he can take a small handful as a morning or afternoon snack. 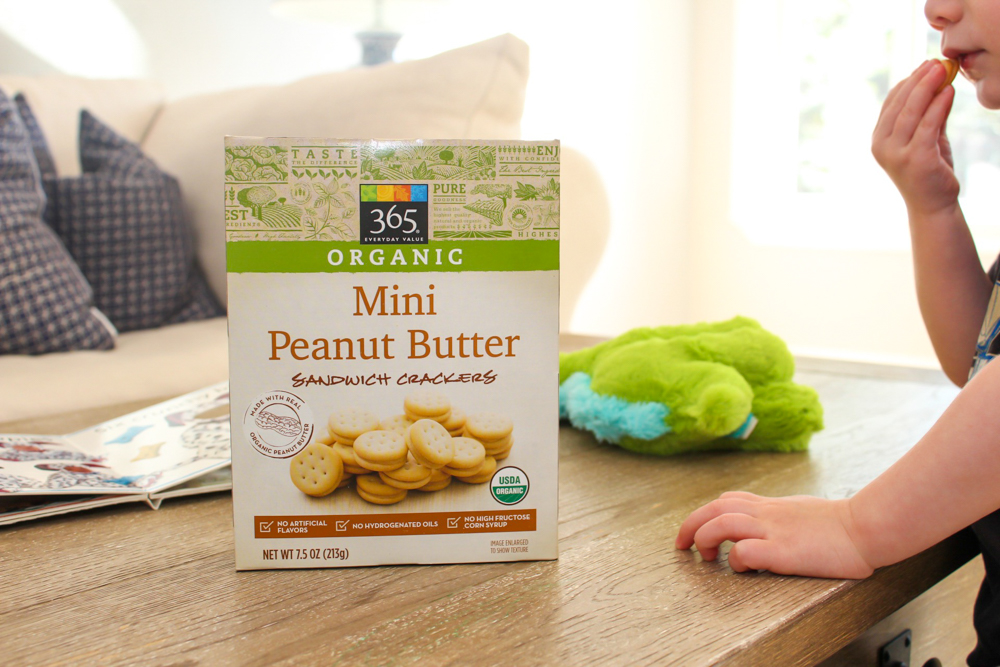 Once again, Brady calls all crackers “kookies” and he walks up to the pantry when he wants one of these. We usually buy the Whole Foods 365 brand.

Fruit and veggie pouches were the first foods that Brady ate. When we first started doing solids, I was pureeing up things on my own, and I quickly realized that was NOT how I wanted to spend my time and effort. Now, we buy these pouches and keep them in the fridge, and Brady usually has one as an afternoon snack. I always buy organic and try to get the ones that are only made of veggies with some fruit. We’ve tried a lot of brands, and he seems to like them all, so I just pick out whatever organic one is on sale at the time, like Happy Baby. 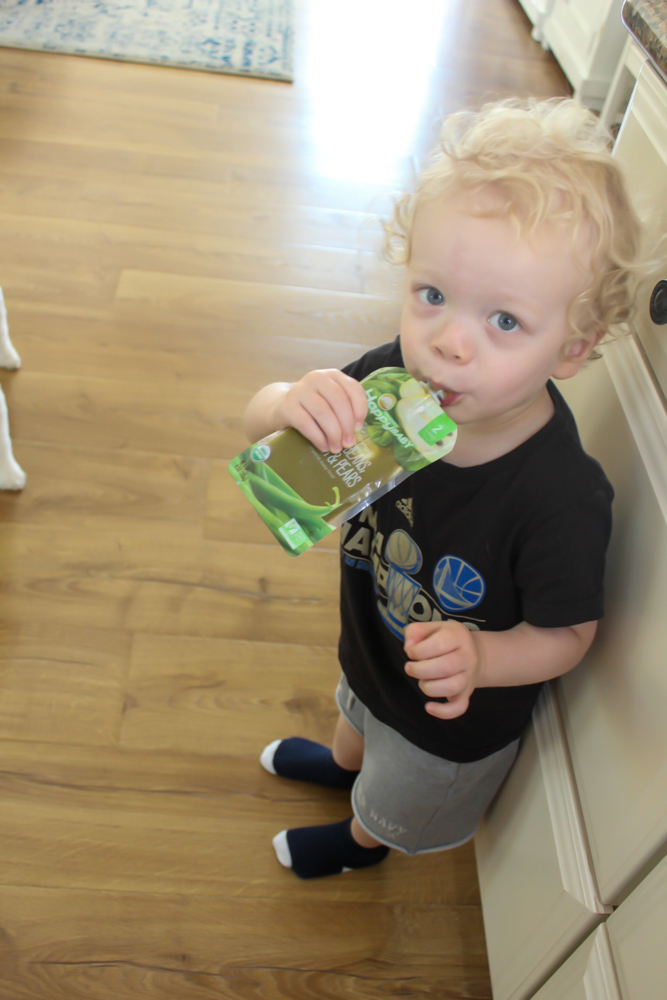 If you want to hear something cute, it’s how Brady says coconut water, “coco wawa.” We always buy coconut water on the weekends when we’re out and about, and Brady recognizes the cans and asks for it. He gets a few sips from the can, and then we pour some straight into his little water cup. He loves it. He doesn’t get any juice, so coconut water is as close as he comes to flavor in his liquids.

Brady hasn’t ever had real ice cream, and we really should change that soon, but he has had a handful of fruit-filled freezes from Pressed Juicery, and he loves them. We call it ice cream, and he knows where we go to get it.

Have you ever met someone so obsessed with dates as me? Probably not! We never ate dates until we moved to San Francisco and then they became a little post-meal dessert. Now, I buy boxes of this brand at a time of the coconut-covered dates, and they aren’t cheap. Brady loves dates as a little dessert after dinner or a mid-day snack. I even bring them out to lunch with us to have after we finish. Like I said … obsessed.

And that about does it for Brady’s current favorites line-up. You may notice that there’s no meat on this list, and that’s because I don’t make meat or fish at home. We take Brady out to eat about once or twice a week, and he always has bites of fish or meat off our plates at that time and seems to be a fan. We’re just not big meat eaters, so he isn’t either. I eat a ton of eggs and Brady was a little reactive to them the first few times he tried, but it’s been long enough that I may give those another go. I’ll keep you posted.

Overall, I think Brady has a pretty good diet, and I’m happy to say that he loves so many of my favorites too! Hope you enjoyed this one!

What’s something that your kid likes to eat that you don’t?

Do you rinse your beans or cook them straight from the can or box?