For my Valentine’s Day present, Dave bought us tickets to see Cinderella at the ballet during its limited-time showing. Yesterday, we saw the very last show in the run.

Because we were attending a day-time matinee on a Sunday, there were quite a few families and kids in attendance.

I should note right off the bat that people in San Francisco seem to pull it together a little better attire-wise at the ballet than they do at the symphony. Note my thoughts on what people wore to the San Francisco Symphony for a reminder. 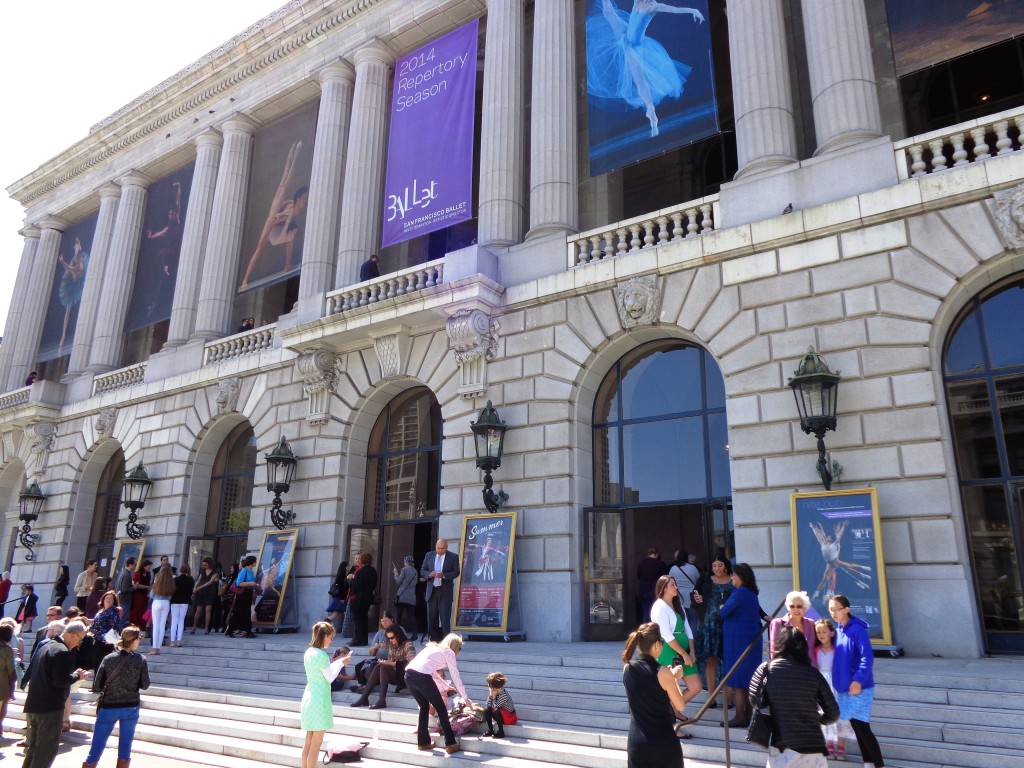 It was bright out there, and we asked someone to take our picture. Guess how many shots it took before we both had our eyes even slightly open? Here you go … 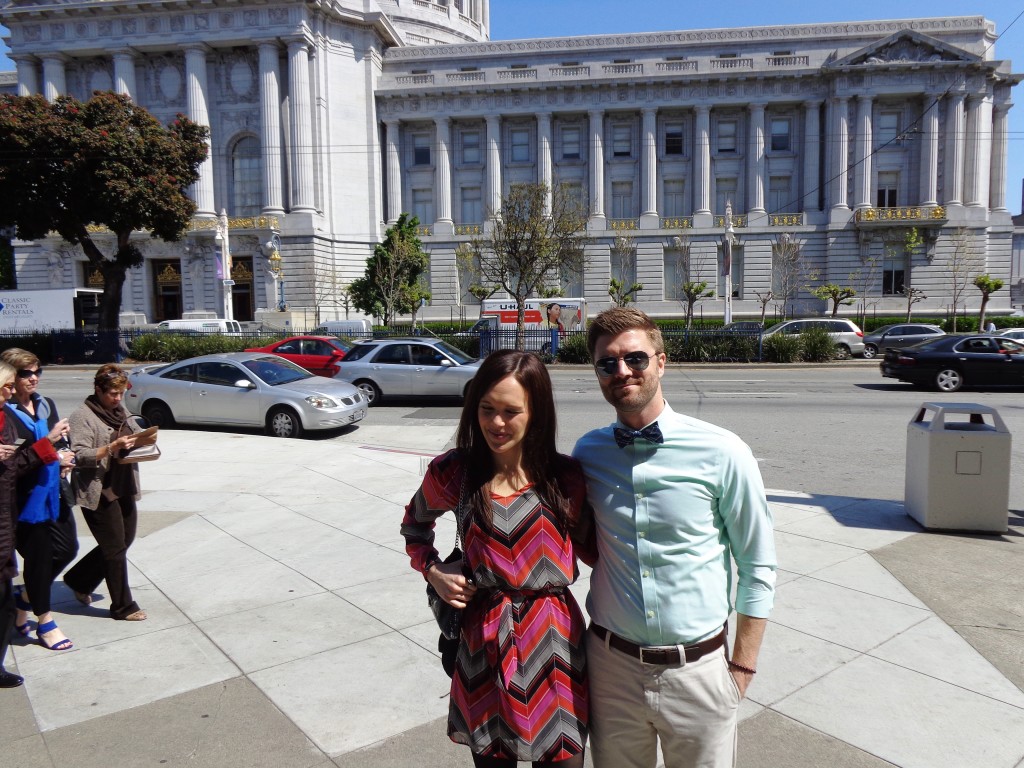 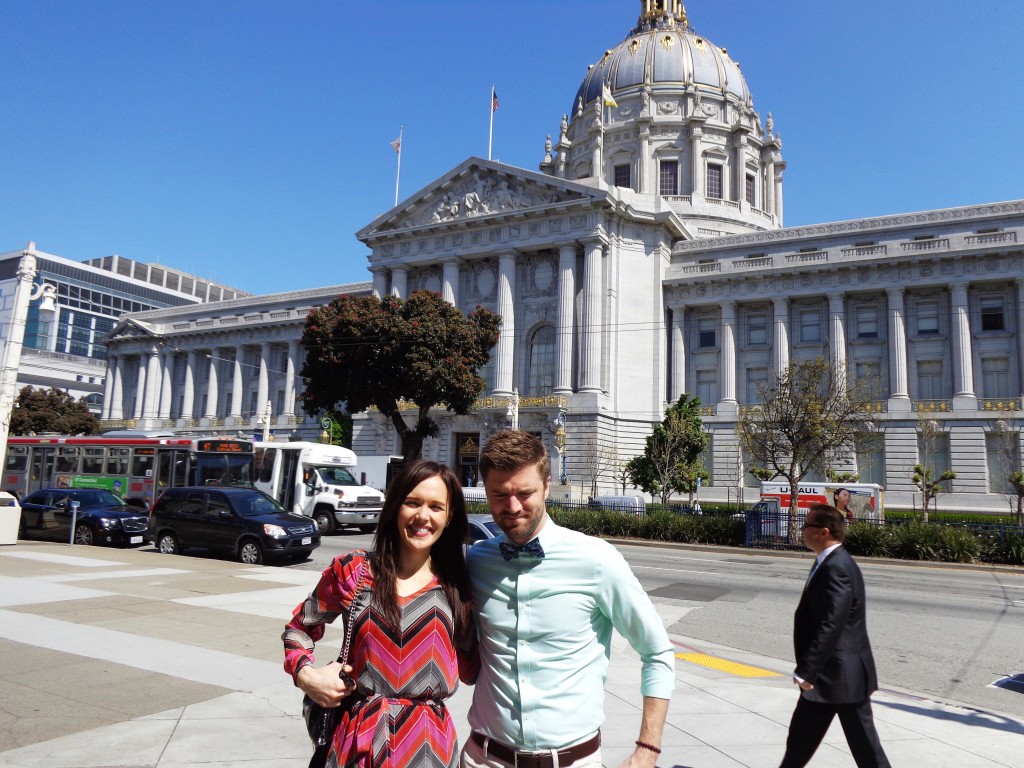 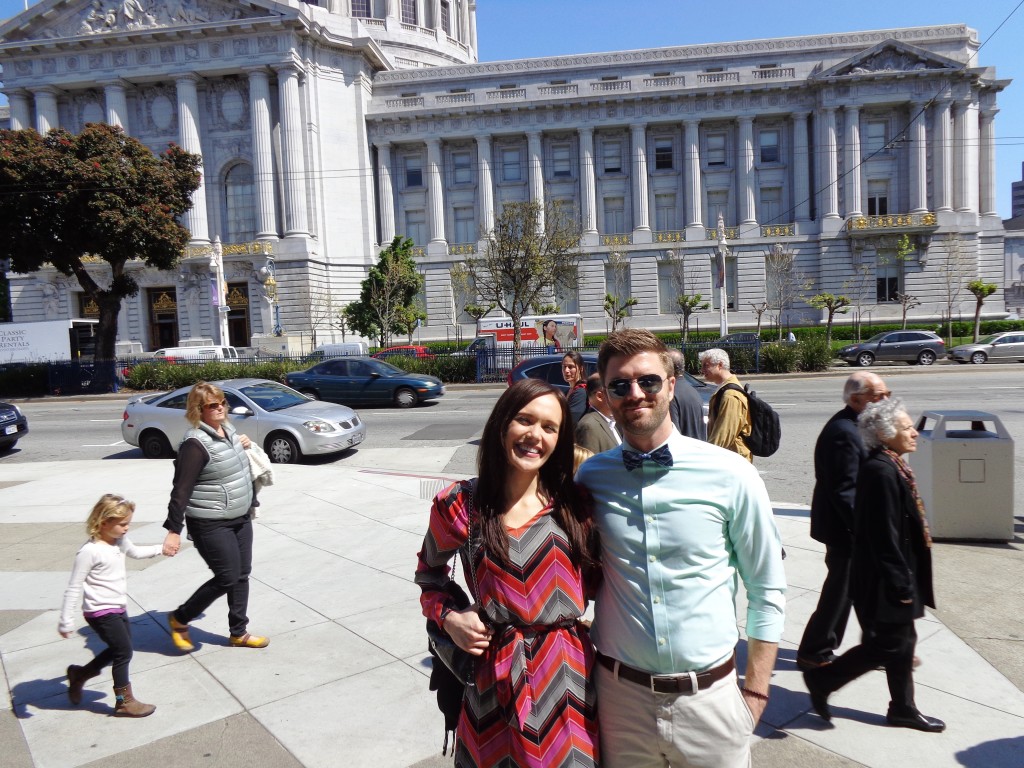 And this is the best we could do. 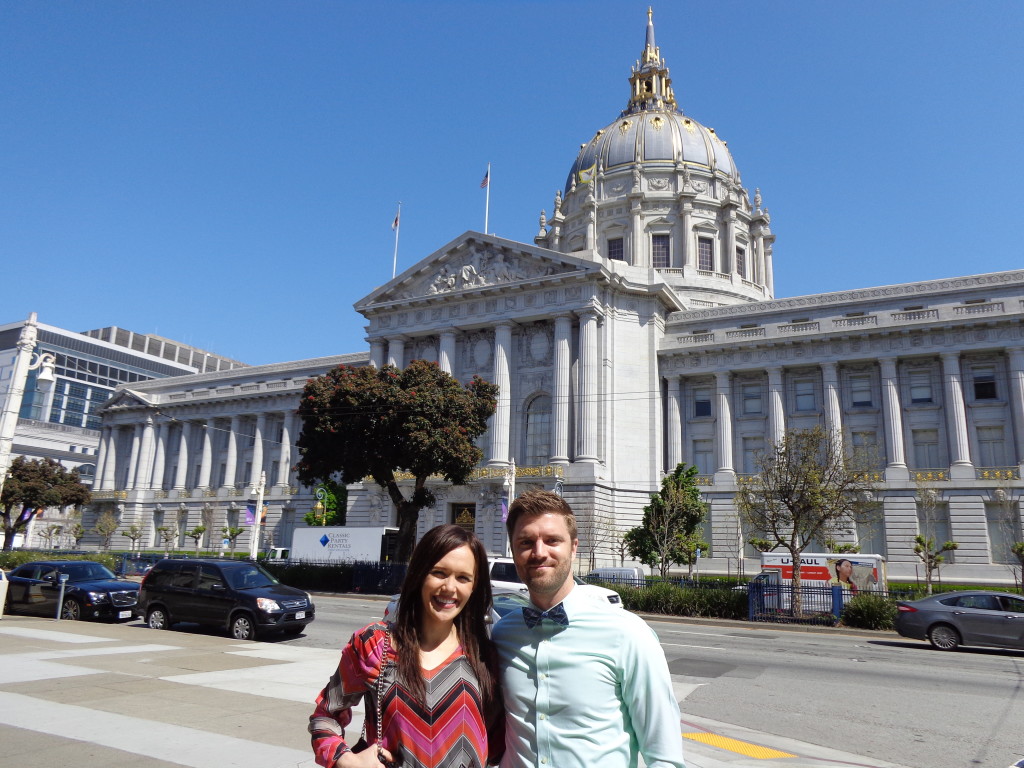 Still a little squinty. Thus, we tried again inside during one of those “hey would you take our picture, oh yeah, of course we will take your’s too.” 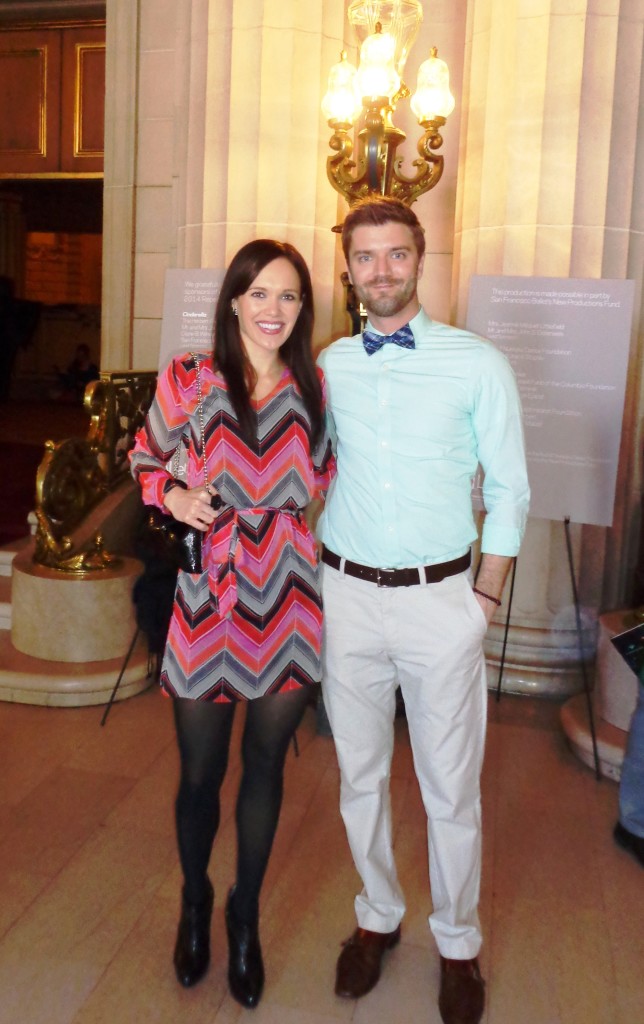 A little better, but mostly, I just love his bowtie and the fact that we are both looking at the camera.

We got there just in time to do a photo-shoot, visit the facilities, run into a friend and sit down.

Our seats were in the bottom-level orchestra area in row T, so not terribly far from the stage. They were in the perfect spot, because we could clearly see the conductor in the orchestra pit and the facial expressions of the dancers. And we were close enough to the doors to slip out at the two intermissions to be first in line at the bathrooms. 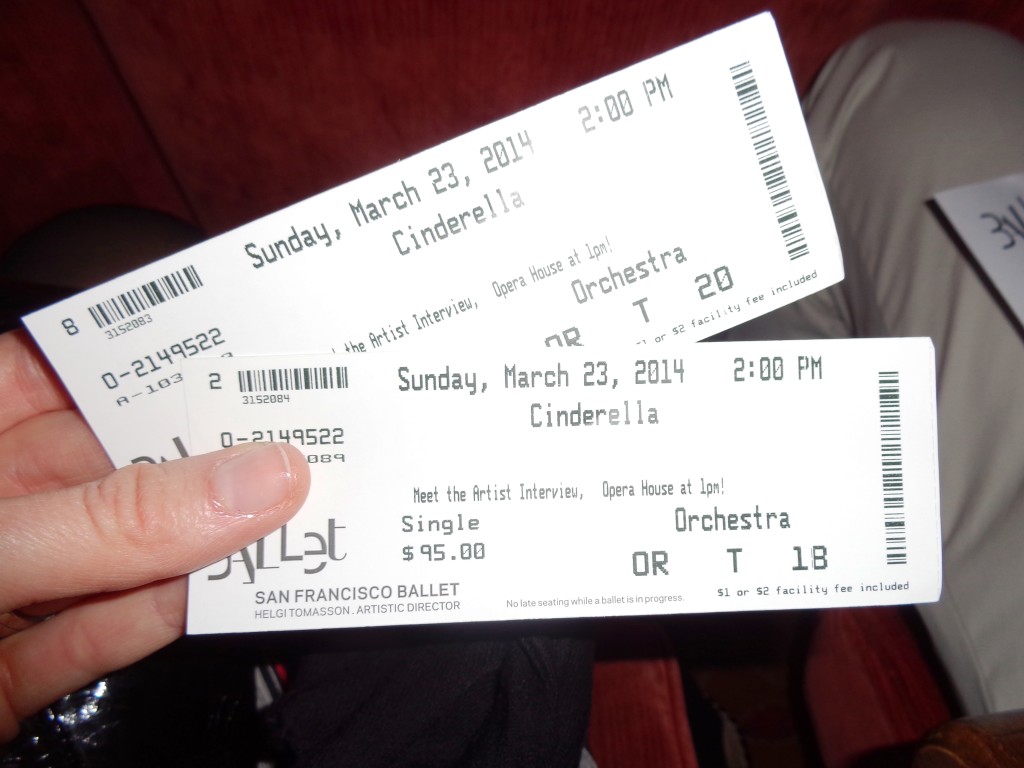 Sorry about the bare nails, but I’m trying this new natural thing.

The Cinderella ballet debuted last year in the U.S. in San Francisco and was so popular it returned this year. It was one of the most in-demand productions ever done by the Company at San Francisco Ballet. And that’s important to note, because according to the program, the San Francisco Ballet Company is the oldest professional ballet company in America, founded in 1933.

I had wanted to go last year, but we never made it happen, so yes, I was ecstatic when Dave presented me with the tickets as a surprise last month.

We’ve seen a lot of shows, but this was our first ballet together. It was a bit fancier than our other musical and cultural outings as of late, such as Cirque du Soleil.

Clearly, no photography was allowed inside, but I did snap this shot before show-time of the lovely interior of the Opera House. 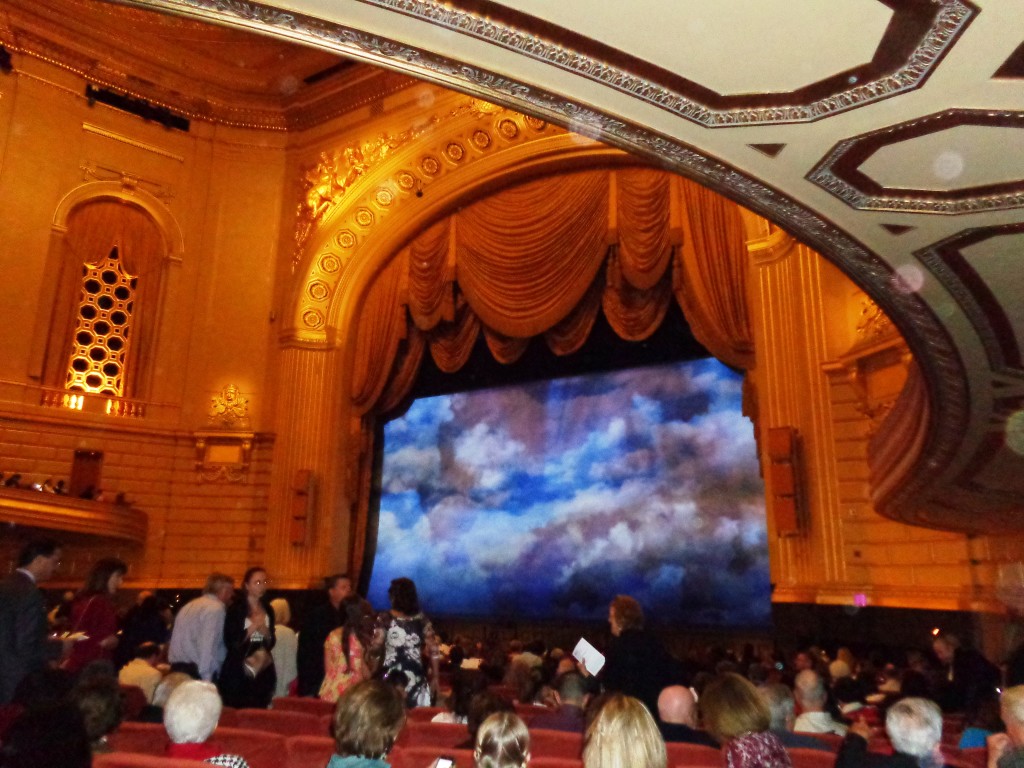 I have to be honest, the first act of Cinderella was a little slow. It lost Dave. It was dark and somber and very emotional. He started getting tired, so we got him an Irish coffee at intermission to keep his eyes open.

Act II and III were much more exciting. All of a sudden large chandeliers dropped from the ceiling on the stage, the lighting became more dynamic and the costumes were larger and more colorful as events starting taking place on stage.

I knew ahead of time that the ballet version of Cinderella would not follow the exact storyline from Disney, in fact it took themes from the Brother’s Grimm version, rather than the fairytale most of us know and love.

However, as silly as it sounds, one of the bigger issues to me was that Cinderella was played by a brunette. That definitely threw me for a loop.

There was no Fairy Godmother or pumpkin coach, but there was a darker side to the story portrayed by the dancers, based on the creator’s goal to produce a more serious Cinderella. There were live trees dancing on stage and a group of four darkly dressed male dancers called the Fates, who seemed to move Cinderella from scene-to-scene offering guidance and protection.

The crowning moment was at the very end of the slow first act when Cinderella left her ragged dress behind for a gold gown. The long tailing train-like piece of the gown was fluffed into the air to make it look like she was on her horse-drawn coach. Hard to describe, but one of the best effects of the show.

That’s all fine and dandy, but I must confess that there were several main things going through my head during this performance.

Here are some of the thoughts that were prevalent as I watched the show:

There you have it. As I sat at the very fancy San Francisco Ballet, my mind was running with some deep questions about life.

All in all, the dancing was incredible. The costumes, scenery and the different storyline really impressed me as we moved along in the second and third act. But it wasn’t the best production I’ve ever seen on stage. I wasn’t moved to give a standing ovation, although I did walk out of there very happy I had experienced it. (Funny enough, only a couple of people stood at the event, so I must have not been the only one feeling that way.)

However, there was a bit of an issue.

Dave and I sometimes tilt our heads slightly toward each other during a show, so we can whisper or lean on each other, nothing out of the ordinary. We didn’t say a peep during the show, but apparently this wasn’t okay with our fellow attendees. At the intermission, we got a tappy-tappy-tap on the shoulder from a woman behind us, who said she had just a small crevasse to look to see the show. And that’s all she said. We understood.

Even if Cinderella wasn’t over-the-top incredible, it was still fun for me to dress up and get out on a Sunday and do something different. It was a great gift from Dave.

We turned our Sunday into a Sunday Funday and had a fancy brunch at home before the show. After I returned from teaching BODYPUMP, Dave cooked us some veggie scrambled eggs and even prepared a smoked salmon and cream cheese wheat waffle specialty for me (he had his waffles with real maple syrup of course). Delicious.

But for real, those ballerinas are some toned skinny-minnies. I’m guessing they keep a pretty clean diet. No, they probably don’t have a sweet-tooth either.

What’s your favorite kind of performance to attend? Have you ever been to a ballet?

People often ask if we like living in Charlotte af

With Thanksgiving coming up in the U.S. next week,

Real talk on food. Every once in a while, I like t

A first for everything. Before we moved to Charlot