I’ve always wanted to try surfing. After attending a SURFSET Fitness class this afternoon, I’m led to believe that surfing may be even harder than snowboarding (which didn’t go well for me the first time).

What is SURFSET Fitness?

The idea of SURFSET Fitness is really quite brilliant.

Think about the toned and glistening bodies of surfers? They all usually have long and lean physiques with chiseled abs, resulting in a shape that anyone would want. In fact, the SURFSET Fitness company was founded by a surfer, who built the official SURFSET equipment because he wanted to maintain his surfing body even when he was at home land-locked and away from the waves.

Lucky for me, Bay Clubs (I teach BODYPUMP for one location and can attend classes as I wish) was one of the first major gym chains to take on the program. Having just launched in 2011, as of now, SURFSET is only offered at 150 locations in the U.S. and Canada.

If the idea of SURFSET sounds familiar, it may be that you saw it on TV. Yes, that’s right, the co-founders appeared on ABC’s Shark Tank and received a round of funding from Mark Cuban to get their prototype and idea off the ground and out into the world.

Although the website says that classes are typically 45 minutes in length, the Bay Club class I attended was only 30 minutes.

It was the perfect amount of time. Those 30 minutes absolutely flew by, because I was so focused on maintaining my balance and listening for the positioning cues from the instructor that I couldn’t ever turn my head to look at the clock. (Side note: if you find yourself watching the clock in a class, it’s not a good thing.)

To complement the entire experience, the instructor turned the lights low and had some good ole’ California beach music on the stereo as a background. It really set the scene.

Basically, a SURFSET class contains normal everyday exercises, performed on top of a surfboard contraption that mimics the feel of waves and water. There are different settings to make the board less wobbly, and since I was a first-timer, the instructor latched both straps to ensure my board was at the easiest setting. Easy it was not. 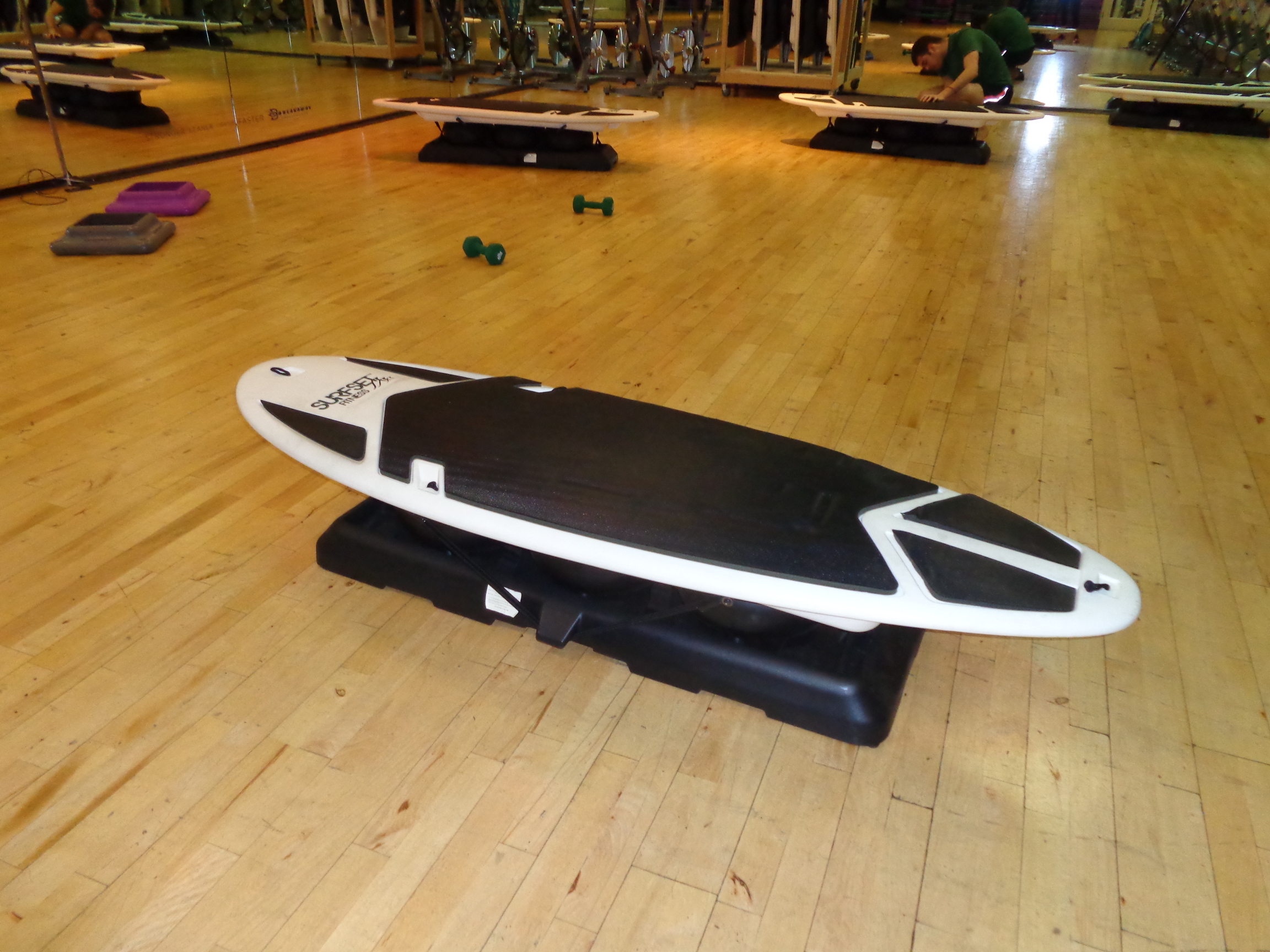 I actually felt nervous during much of the class, because there was a large likelihood of falling off. Even though it would have only been a foot down to the ground, I didn’t want to be the only one falling.

There were only a handful of attendees today (since the room is small and each board takes up a lot of room), and most of the students are regulars. I held my own and took as many high-options with difficulty as I could to make sure I was getting the most out of class.

The class began with us standing on the board to one side (the typical surf stance) and doing squats. Since the board moves back and forth like it is on the water, you instantly had to brace your core to maintain balance. From there, we did planks, mountain climbers, lunges, tricep push-ups, sit-ups and a few surf-inspired moves right on top of our boards. There was one move called the “starfish” sit-up, which required crunching up into a c-crunch with legs and arms, then slowly lowering everything to the ground for eight counts, making the shape of a starfish. It may be silly, but I really appreciated the beachy names of the moves. (I’m one for theming.)

Then we did some real surf moves that required quite a bit of core strength and balance.

Those moves included “duck dives,” which happened when we were on our stomachs on the board. We went from strong paddling (even the swimming portion was tough, particularly for someone like me who admittedly is not the most graceful swimmer) and then tucked our toes and moved our bodies up and under the waves, engaging the core, shoulders and triceps.

The signature “pop-up” surfing move is that one you always see during a surfing lesson, and it’s not easy either. In fact, it’s scary to go from stomach down laying on the board, pushing off with a jump and landing on your feet to the side. How do surfers make it look so easy?

We finished up the class with some yoga postures on top of the surfboard and then completed a short stretch session on the floor. Done and done.

I spoke briefly to the instructor after class, and she said there is a basic format for all classes, but it’s also up to the instructor’s discretion to choose the music and fill in the exact moves. She done good.

SURFSET Fitness is a great core and balance workout, with moments of cardio, but generally a strength-based program. There were times when we did high-knee runs in place off the board for a little kicker, but the majority of the class is done on the board.

The class was not exactly high-intensity, but more of an enduring challenge. My legs were feeling it from the first minute and that stayed with me through the end. You could push yourself according to your level of fitness, but you had to have at least some core strength and balance to complete the exercises.

But you’ve got to be ready to get out of your comfort zone a bit, because in addition to the challenging strength moves, there’s a little bit of “danger” with the chance of falling off the board during every move.

As a group fitness instructor, I love going to a class for the first time and feeling nerves and challenge, because it makes me appreciate and be prepared for those first-timers who join me for any of the Les Mills programs I teach.

With no beach vacations on the horizon, I don’t think my real surfing career is going to take off any time soon, but I might go back for some more duck-dives and shark kicks from the safety of the gym.

Have you tried any unique workouts lately?