Well, hello 2016 — there you are! Greetings to you in the new year, my friends. I hope you’re having a great start so far. 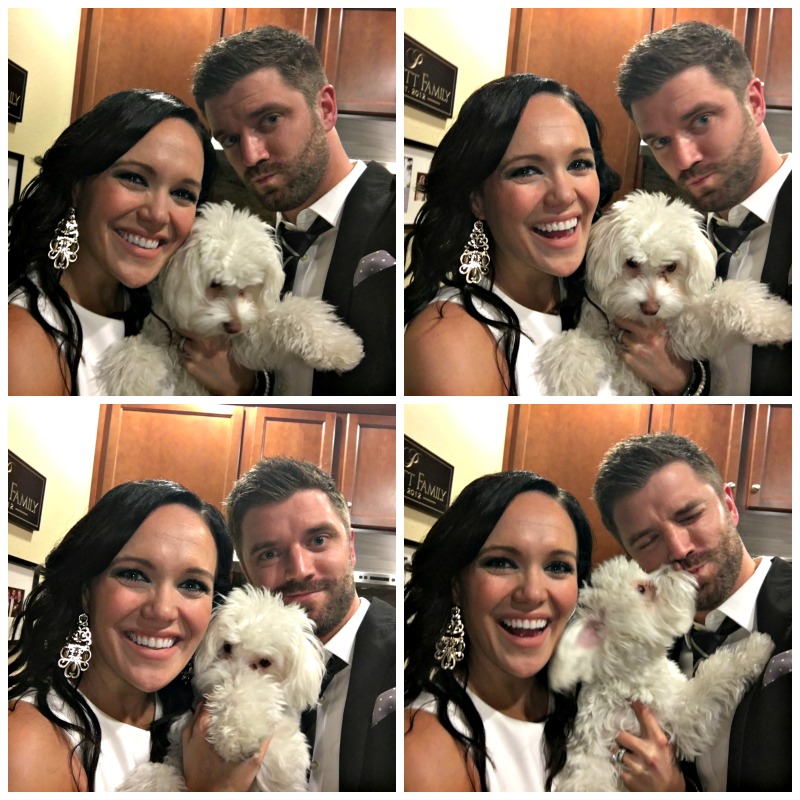 Selfie attempts in the kitchen on New Year’s Eve are a must.

I’ve already had to write out “2016” two times and nailed it, so I’d say the year is going well for me. Let’s chat about some of the fun of the New Year’s Eve weekend and then get into the workout round-up.

Kicking off the weekend with a workout

On New Year’s Eve, Dave and I started the day with a sweaty 45-minute cycle class at FlyWheel Walnut Creek. We had been together one time before, so knew what to expect and both tried to push pretty hard — but I just didn’t perform that well for some reason. The top five women and top five men received a Lululemon gift card during that class, and Dave earned a card, but not me. However, now we both have a gift card for Lulu, because I received one for $100 from some members of one of my group fitness classes just before Christmas (how sweet!). I’m hoping to pick up some new loot using the gift card this week. 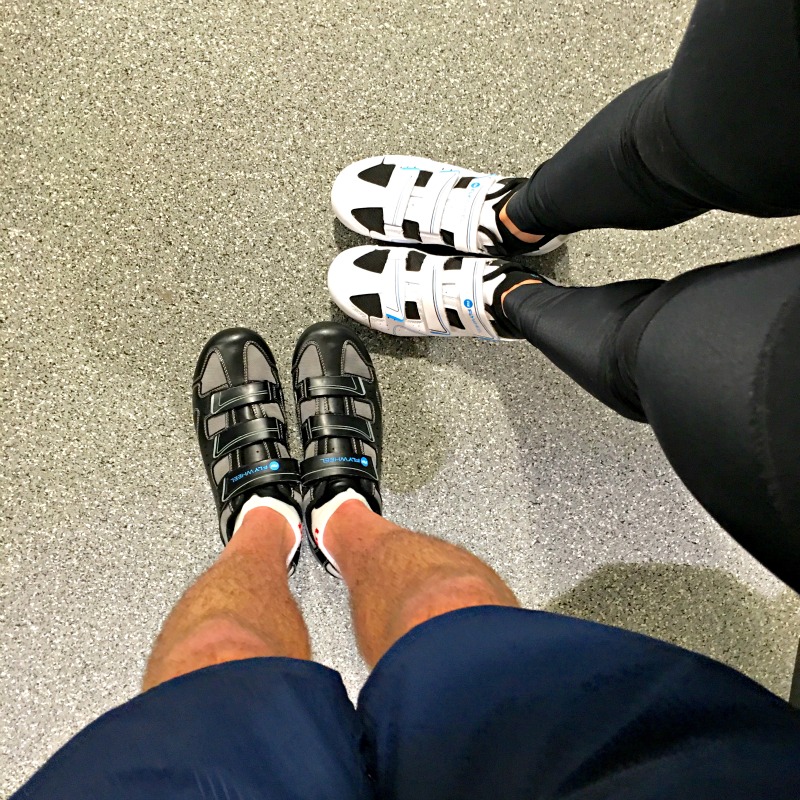 His and her cycle shoes. And yes, a FlyWheel review is coming soon.

In the afternoon, we took down our Christmas decorations and did some relaxing, gearing up for the big event. In the evening, after eating a lovely steak dinner at home, we got all dressed up and jumped on the BART (subway) to go into the City for the fun portion of the night.

Dave had been invited to a special event at the W Hotel, and we were able to bring a couple of friends along with us to experience the celebrations in style. We arrived at the W in the SoMa neighborhood about 9:45 p.m., were dropping off our coats at coat check in the VIP section by 10 p.m., and had a glass of champagne in hand by 10:05 p.m. 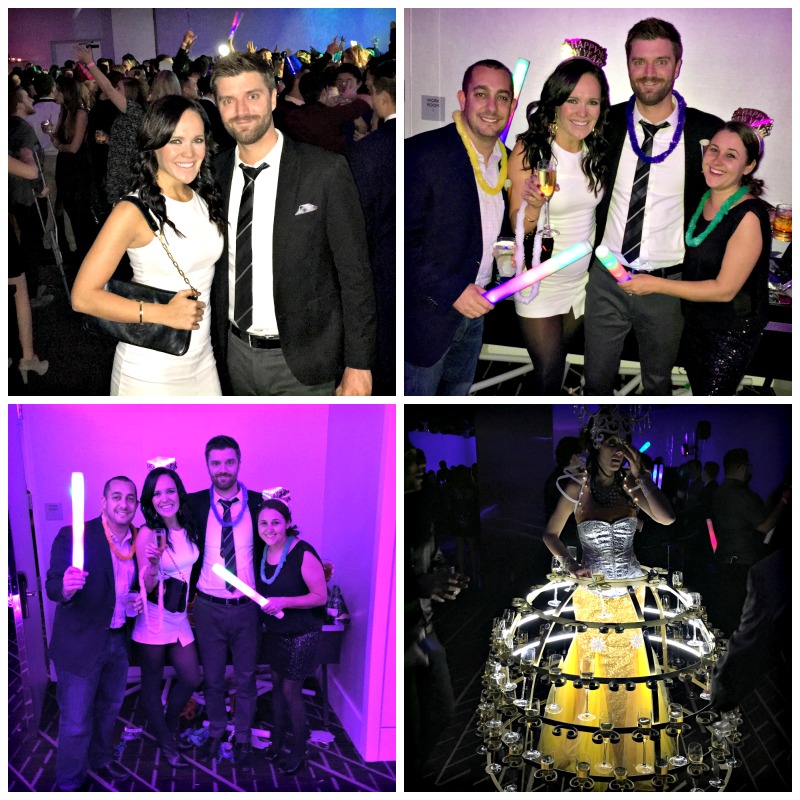 Yes, that lady is wearing a skirt holding champagne. And no, I didn’t take one from her. Also, tons of hats, props and noise-makers were provided, and we seemed to pick up more and more stuff as the night went on.

The next three hours we spent dancing, people-watching, popping into the photo-booth and hanging out with our friends, Nick and Clare, who met us there. It was a super fancy cocktail party and people were so well dressed. I absolutely loved it! There were several rooms with DJs playing different type of music, and we moved around, finally settling on a hip-hop room to ring in the New Year and partake in the countdown.

Dave and I elected to take a very expensive Uber ride back to Walnut Creek shortly after 1 a.m., and although it was pricey, it was definitely a warmer and easier option than walking to the BART. True story: For the entirety of our relationship, Dave and I have been to house parties for New Year’s (and stayed home last year at our own place), so it was a big change for us to be out and about, and I’m so glad we did. It was great!

On New Year’s Day, Dave and I did a ton of chores at home. We basically cleaned the entire house, gave Rudy a bath and then even hit the gym — (which was not busy at all). It was a very productive day, which we concluded with a huge dinner at P.F. Chang’s in downtown Walnut Creek. 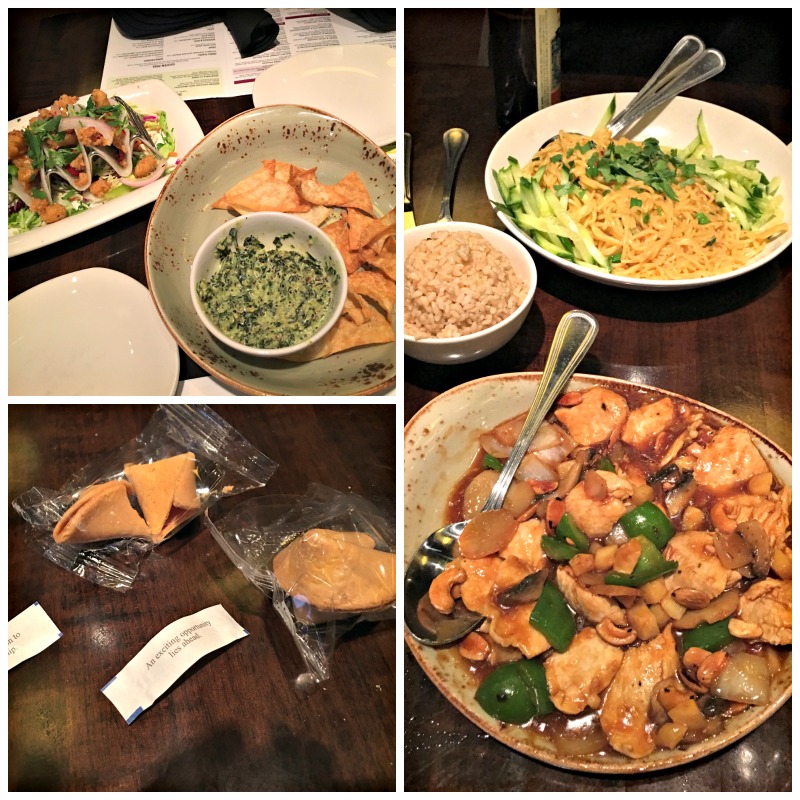 Some delicious items include lobster street tacos in jicama wraps, kale and quinoa dip with seaweed chips, fortune cookies and the main entrees — cashew chicken, garlic noodles and two sides of brown rice. Unpictured: The Great Wall of Chocolate cake, which we took to go, and we (I) devoured at home on the couch. No apologies.

We rarely go to chain restaurants, but when we do, I’m reminded that they are cheaper and offer much bigger menus and portions. We sat at a high-top in the bar area, ordered a bunch of tasty items and walked out of there totally stuffed. Good stuff!

A low-key couple of days in the Creek

The rest of the weekend was pretty uneventful for us, and I took little-to-no pictures. On Saturday, Dave and I both went through our closets and drawers and pulled out a bunch of stuff to donate. We also hit up the grocery store, made a Christmas return and then ate an oven pizza for dinner at home. Dave joined some guys at a bar later that night, and I stayed home and watched a special about William and Kate with Rudy on the couch. Fabulous stuff. 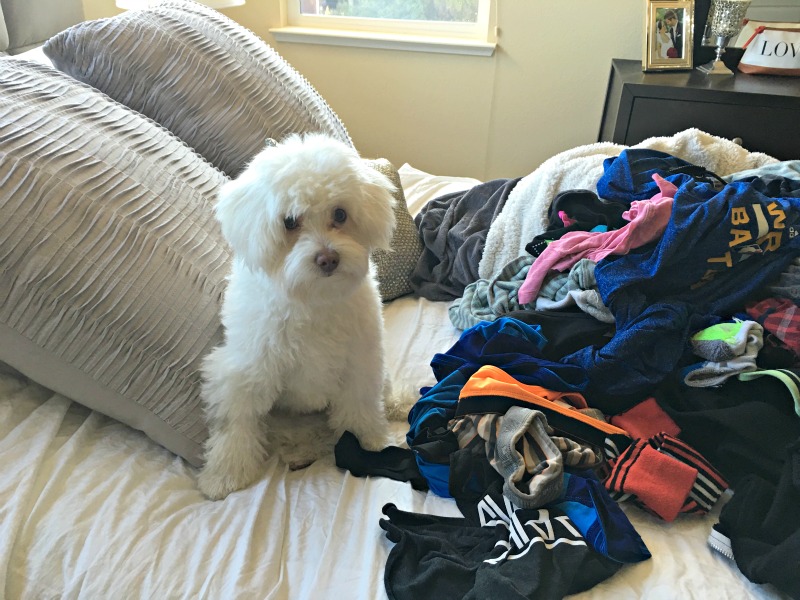 Rudy was super helpful this weekend with all of things we got done around the house. Particularly the laundry, typically he lays on top of the pile, which is where he ended up shortly after this picture was taken.

On Sunday, once again, we didn’t do a ton. After a quick yoga session at home, we went to a late and delicious lunch at Sunrise Bistro in downtown Walnut Creek, ran some errands, and then picked up all the fixings for a roasted chicken meal Dave cooked from our The Newlywed Cookbook. Then we laid around to soak up the last few minutes of freedom before the first big week of the year.

What could have been better about my workouts?

Because my heavy workout schedule has taken a back-seat this holiday season, I’d say this past week was perfectly full and challenging without going overboard as I jump back into it. I’ll take it!

I hope you have a great start to your week and year, my friends! (P.S. Thanks to Meghan for hosting today’s “Week in Review” link-up.)

What did you do to celebrate New Year’s Eve?

What’s on your workout plan this week?