I’m so glad to have woken up to clear skies today.

Yesterday it rained all…day…long. In fact, it was raining so badly in the morning, that Dave dropped me off and picked me up from teaching BODYATTACK, so I didn’t have to walk the 1.1 miles to the gym and get soaked.

In case you didn’t know, the Bay Area has been in need of rain. Over the last year, we’ve had less than half of the normal amount of rainfall, and it’s been causing plenty of drought-like problems for farmers and even almond growers. Gasp.

After a relaxing afternoon at home laying around, in the evening, Dave and I suited up and headed out in the car on a rare trip outside the City.

We drove south to downtown Los Gatos to meet up with two of his coworkers and their wives for our second group gathering dinner. The first of which took place in San Francisco in September at Amarena in the Russian Hill neighborhood.

Dave and I were not super excited to drive an hour to dinner, but of course, the second we arrived, were glad we did. We met at Cin Cin Wine Bar, a cute neighborhood place that even had parking.

We gathered at the bar for a bit, then sat down in a very cozy table. The dining room and the bar were totally full and stayed that way during the entire four hours we were there. 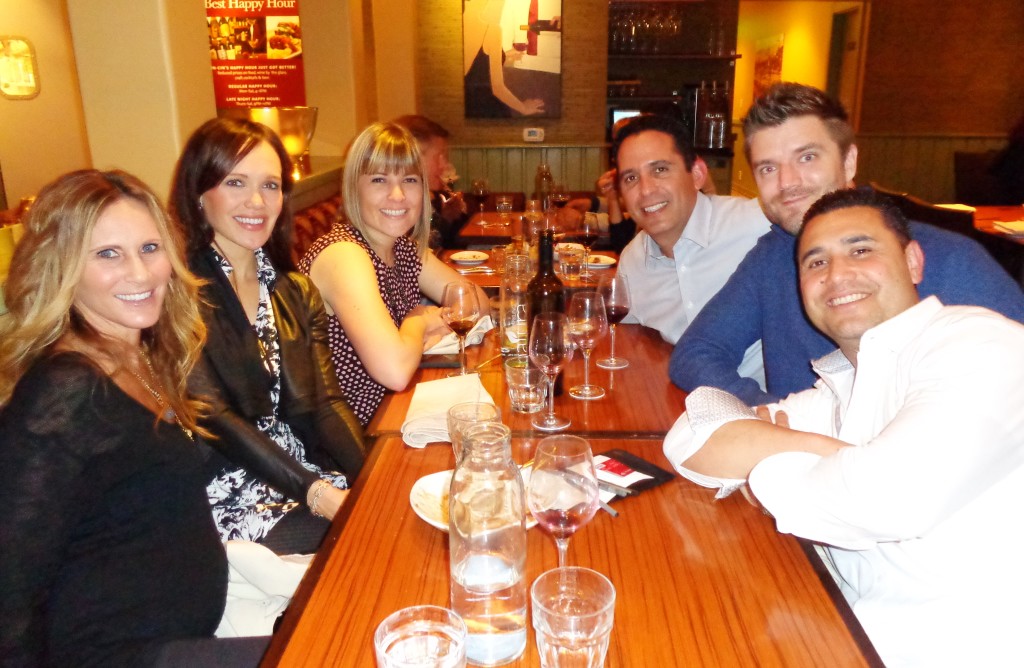 Men on one side, women on the other.

The food at Cin Cin

Most of the menu included small plates, so we opted to share everything.

I tried the empanadas, Korean tacos, fish tacos and a hearty helping of both salads, all of which was excellent. The good thing about ordering small plates like this is that every single bite is pretty satisfying, so even if you don’t select the healthiest of items, you don’t have to eat a ton. Moderation, my friends!

Both Dave and I, and another couple, brought a bottle of wine from home, so we shared some red wine among the group as well. We called ahead and found out that the $20 corkage fee would be waived if we purchased a bottle, so of course, we had to do that too.

However, our waiter didn’t automatically take one of the corkage fees off our bill, and we had to let him know about the policy. He hadn’t heard of it, checked with the manager, then came back and apologized, removing $20 from our tab. Not exactly a good point for our Cin Cin experience. Yet, prices in Los Gatos are quite reasonable compared to the City, so we really couldn’t complain.

The highlight of the meal came at the end when we ordered three desserts, and they were completely photo-worthy. (I tried not to disrupt the quick pace of the small plates being delivered through our entire dinner, thus none of the tapas were pictured.) 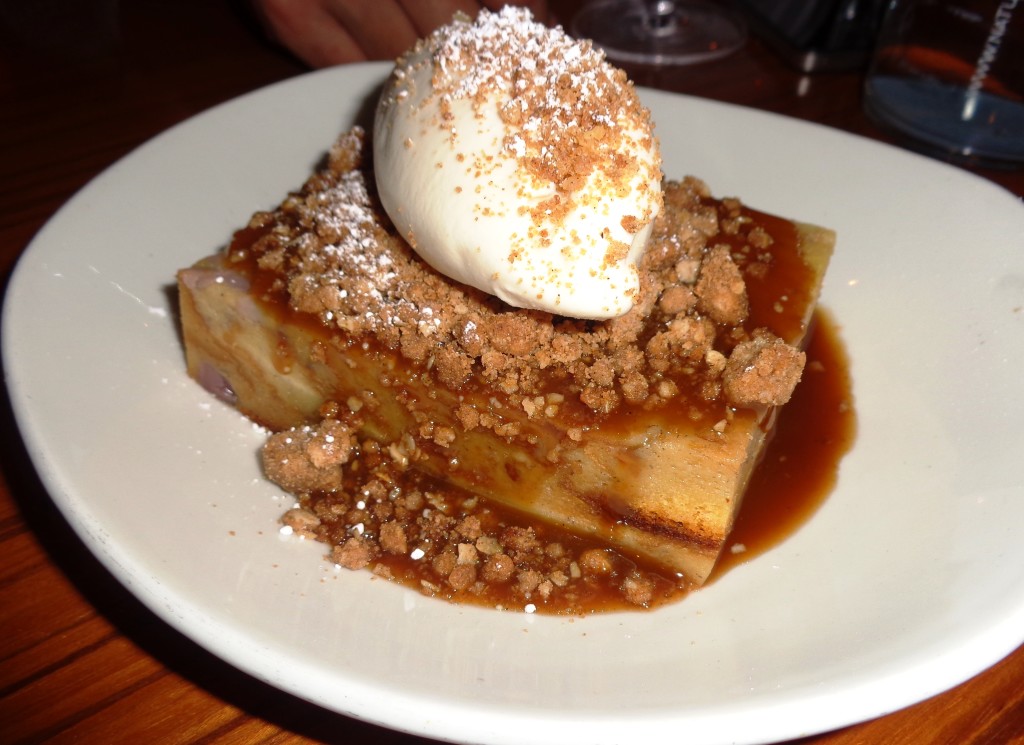 So moist and delicious.

And one hazelnut brownie bar, topped with hazelnut gelato. 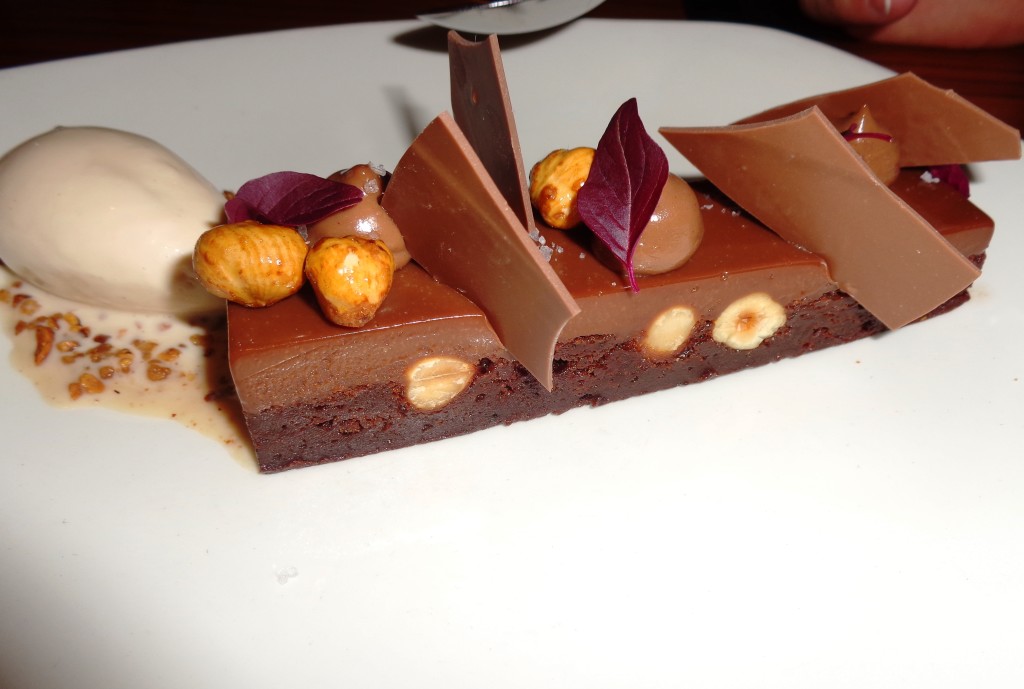 Can you see the spoon heading toward the brownie? I couldn’t even snap a shot before that one was attacked.

And no, not a bite remained on those dessert plates when we were finished with them.

Dave has two main core coworkers in his department (shown with him above), and they all live very far apart. Therefore, after meeting up in the City for the first dinner, it was our turn to drive south for the second dinner. The third will take place out in the East Bay. It’s a great excuse for us to explore areas where we normally wouldn’t go on a Saturday night.

Just before 10 p.m. our group called it a night, and we all went our separate ways; two couples driving an hour and one hopping in a cab just three minutes from home.

When we got home, we noticed we smelled like food. The rich scents of the small plates had sunk into every piece of our clothing, even our hair. I haven’t been to a restaurant when that happened in some time. The smell was as strong as post-Benihana. Wow.

Drive, smells and bill issues aside, it was a good night. I love a laid-back and long dinner, complete with tasty food, friendly company and tons of laughter.

I look forward to the next get together and hope it doesn’t take another five months to schedule.

Now, I’m off to sub a BODYPUMP class.

Do you like to eat tapas-style or do you prefer your own plate when eating with a group?