Yesterday I had the chance to try out the new Strala STRONG yoga class at Sports Club LA San Francisco.

I had a complimentary one-day guest pass to check out Sports Club LA expiring at the end of March, and as a gym aficionado, I made a point to use it.

The club is pretty swanky. It’s located on Market Street close to the Financial District and Union Square in San Francisco. Here is the street entrance, which is in the same building as the Four Seasons Hotel San Francisco. 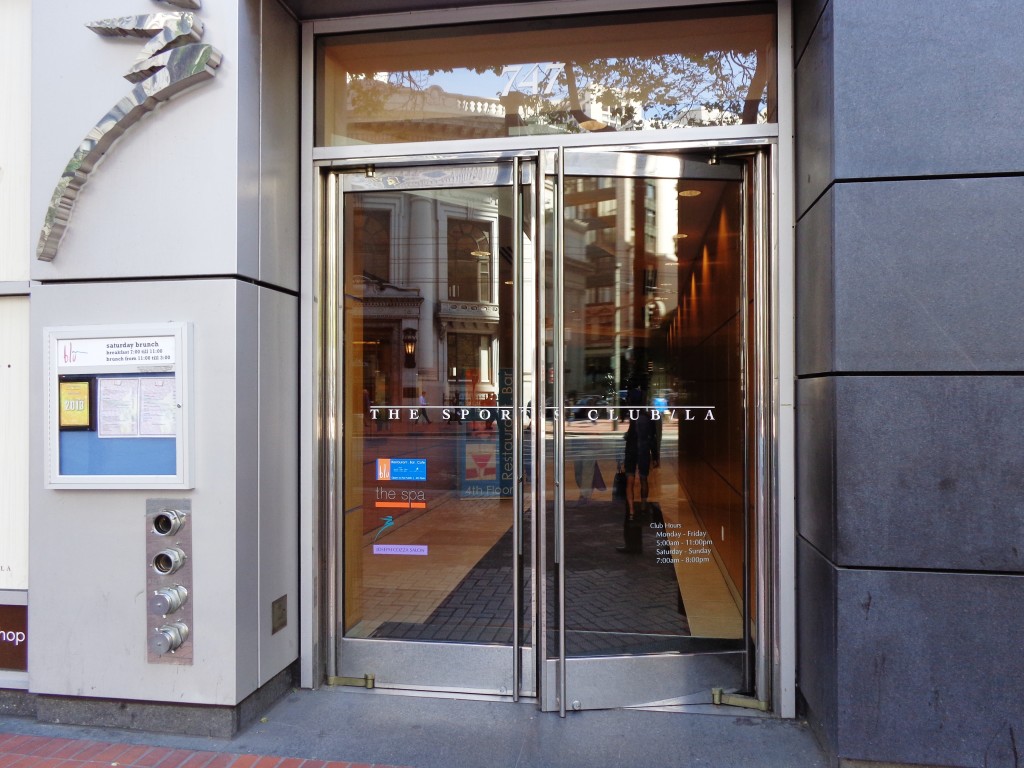 The first thing I noticed about Sports Club LA is the welcoming reception area. When you get off the elevators, it looks more like a nice hotel than a gym. There are several seating areas, where people were working on their laptops or talking on their phones, perhaps pre- or post-workout. Those areas are the only places where cell phones are allowed, so it’s convenient that they are allover the gym.

Now let’s get to the class.

I went to the gym at the right time to attend a noon Strala STRONG yoga class, because I had heard a few things here and there about the creator of Strala, Tara Stiles. She is a former dancer, who has been called a “yoga rebel” by the New York Times. She has written a couple of books and has her name on a Reebok-branded yoga line. Clearly, she has some street cred.

I wasn’t totally sure what to expect in the class, so I did a bit of online research to learn that Strala STRONG is one of four types of Strala yoga classes started by Stiles. The others are RELAX, ENERGIZE and BASICS. Stiles has a flagship studio in NYC, and Sports Club LA is the first and only chain debuting this year the Strala program throughout its few U.S. locations. I love trying something early on, so was sold on attending Strala class.

Strala is a movement-based system, and the word literally means to move with ease. The classes are designed to have you feeling fantastic when you walk out. You don’t have to worry about not being able to get into certain poses, and you don’t have to be burdened by the stuffy yoga atmosphere of some other formats. There are no strict rules. In fact, it’s known as a laid-back form of yoga, which is set to the backdrop of great music. It’s not your usual yoga background sounds either, and my class featured a mixture of 60s and 70s tunes, which I loved.

As I was checking out the gym and wandering just outside the mind and body room, the instructor was entering the studio for class. As any good instructor does, she introduced herself to me, as Arletta, and told me a bit about the class.

Arletta said Strala is very new to Sports Club LA, and a lot of people haven’t had a chance to try it yet. Thus the class was not full. There were only four participants, including me.

Here’s the studio where the class took place. 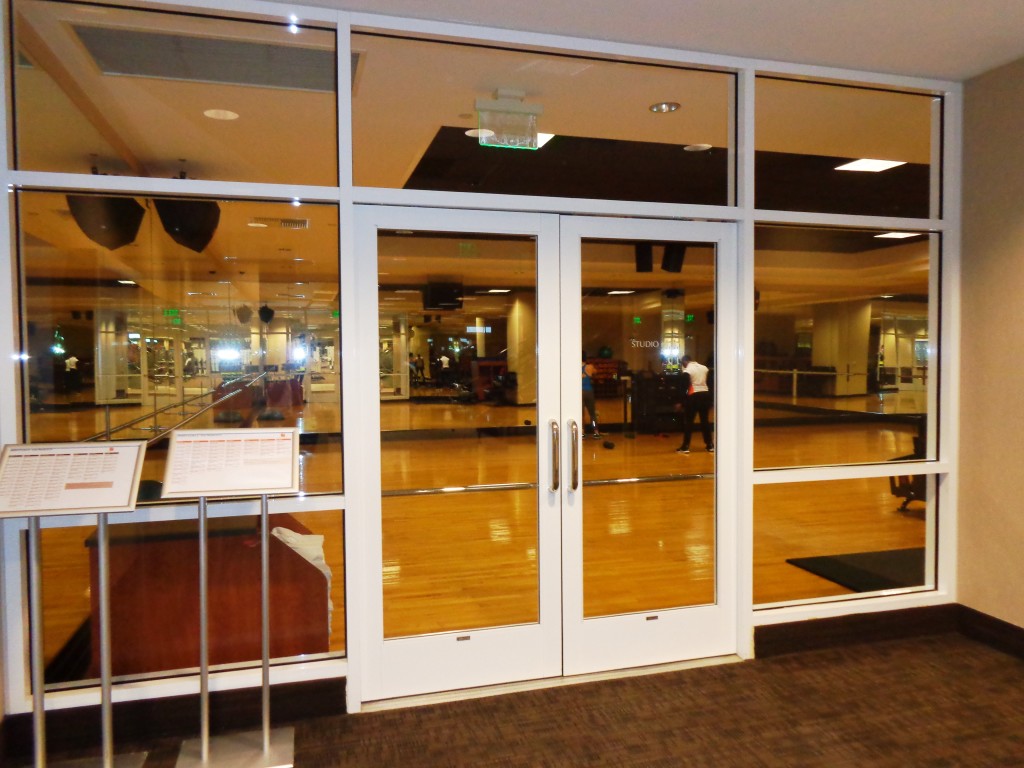 To participate in Strala, all you need is a mat. 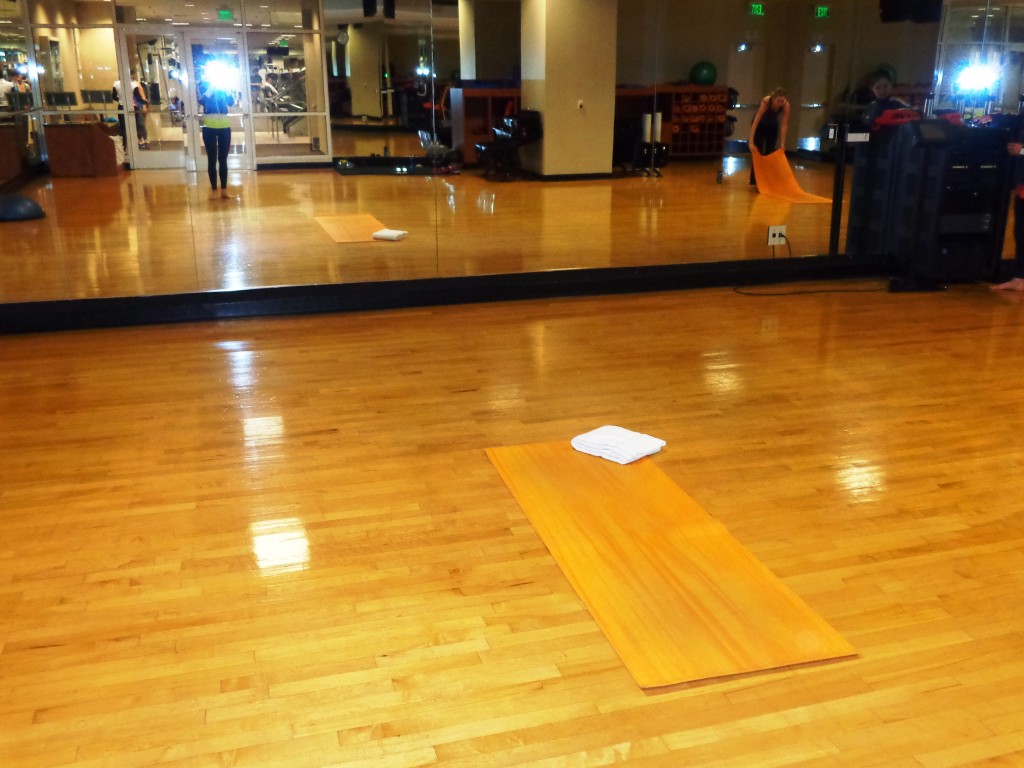 The class started with some seated deep breathing. Then we moved into some basic yoga postures, like downward dogs, warrior poses, push-ups, planks, lunges, triangle poses, crow poses, you name it. We moved from pose-to-pose, without really stopping. Each time we hit a posture, we moved through it fluidly and sometimes wiggled around on our own to explore how it felt. I really enjoyed this type of yoga, because it got my heart rate up a bit, and I even broke a sweat.

The abs portion at the end of class only lasted the length of one song, but it was very challenging. More so than the abs portion of any other yoga class I’ve taken. We did some V-sit crunches, lifting our arms and legs and lowering down slowly. I certainly felt the burn there.

Popping into an assisted handstand during class

To me, the highlight of my Strala experience was when we were encouraged to explore a handstand. I haven’t done a real handstand in so many years, and quite honestly, my body was scared. Well, Arletta came up behind me, told me to lift my legs, and as I pushed up into a real straight handstand, she guided my legs and stood there as I held it. It felt incredible. It was very challenging, but knowing she was there gave me the courage to hold it for a bit. And when I came down, I let out an “ahhh” because it felt so darn good to reach that posture.

As a group fitness instructor myself, I appreciated the personal attention from her. That’s the sign of a good one, in that she offered a challenge but provided a little back-up. Thanks, Arletta. Maybe I will try a handstand again sometime at home and see if Dave will hold my legs.

What makes Strala different is that it really isn’t about the pose at all. It’s about the movement and feeling free. It was unlike any other yoga class I’ve ever taken, and I felt very comfortable the entire time moving how I wanted rather than comparing myself to others or competing.

I asked Arletta to pose with me for a quick shot, and she was kind enough to speak to me after class to talk a bit more about the background of Strala. 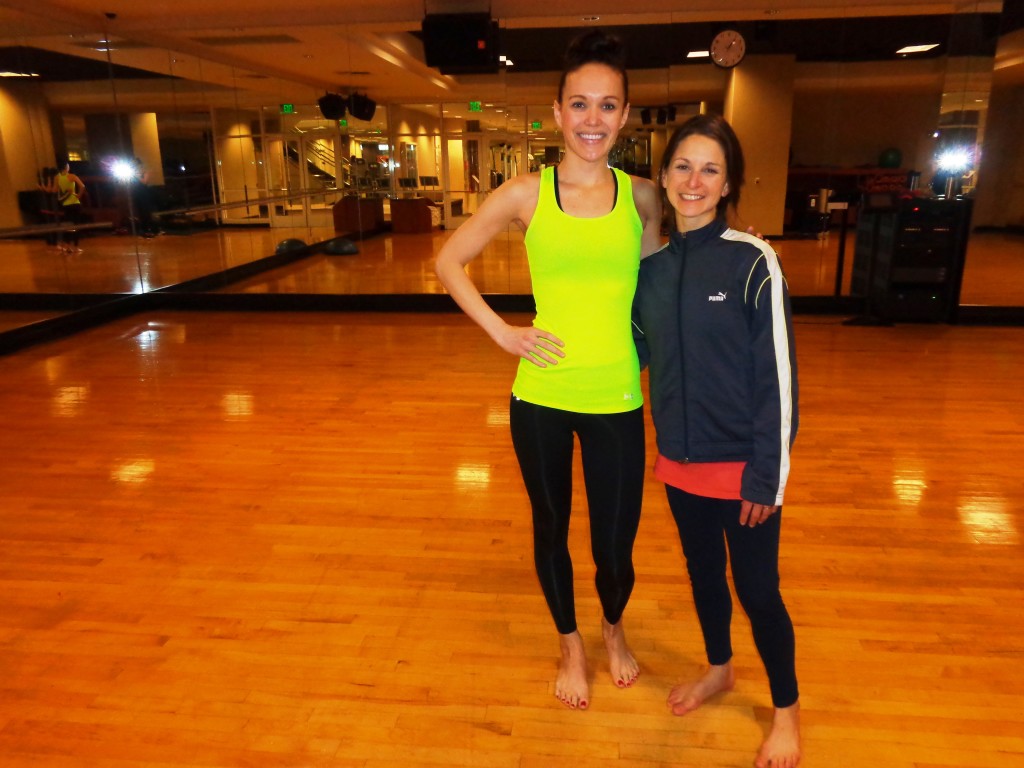 I really did walk out feeling good.

If you are curious about Tara Stiles and her yoga practice, check out the Tara Stiles YouTube channel to try some Strala. You can also purchase a full one-hour class to watch online.

Because checking out the club was the purpose of my visit, let’s get back to my thoughts on Sports Club LA.

The club’s class schedule is very robust. There are early morning, mid-day, evening and even late-evening classes most days of the week. While they don’t have Les Mills group fitness (which of course, is what I am certified to teach), they do have a good variety, including different formats of yoga, barre, tabata, Pilates, ballet, cardio kickboxing, Zumba, ballet, etc.

For those that choose to workout alone, there is a huge cardio area, full weight-room and TRX setup. There is also a cycle studio, large group fitness room and a separate mind and body studio. And because the gym is on Market Street, there is a great view for those breaking a sweat on the machines. 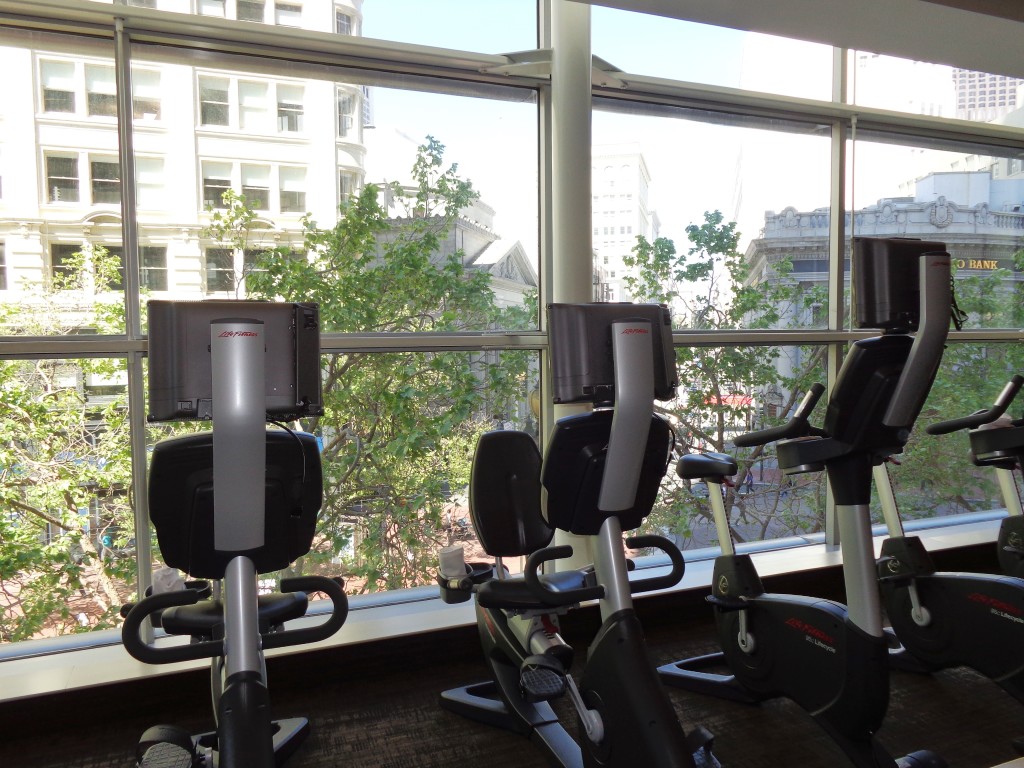 It’s not a cheap gym. Everything is high-end. There is a salon, a spa and even a bar. The clientele seemed pretty high-end too.

I was very impressed with the women’s locker room. There was an attendant who divvied out keys and even asked me if I preferred a top or bottom locker. There were plenty of fancy vanity stations around and basic toiletry products available. No, I couldn’t take any photos of the amenities since there were naked women running around, but I will attest that it was the nicest locker room I’ve ever entered.

Another high point for Sports Club LA is the dining options. The food selection is better than some restaurants. It looked like a robust farmer’s market buffet, with made-to-order sandwiches and salads available, in addition to the full restaurant and bar, called Blu. 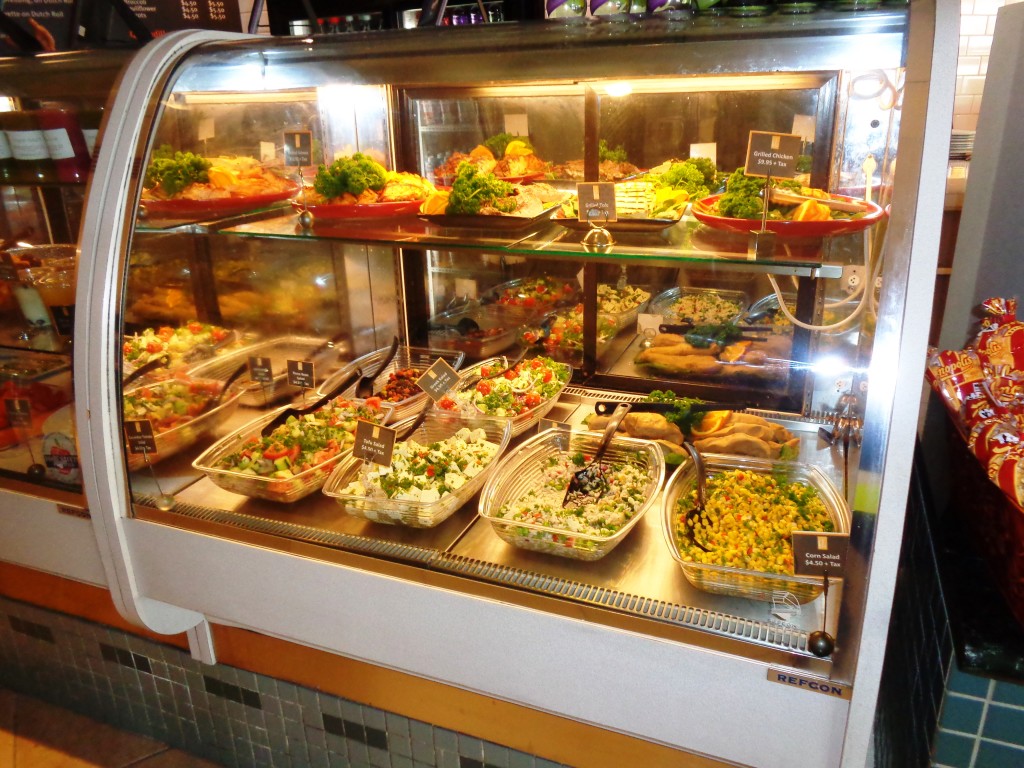 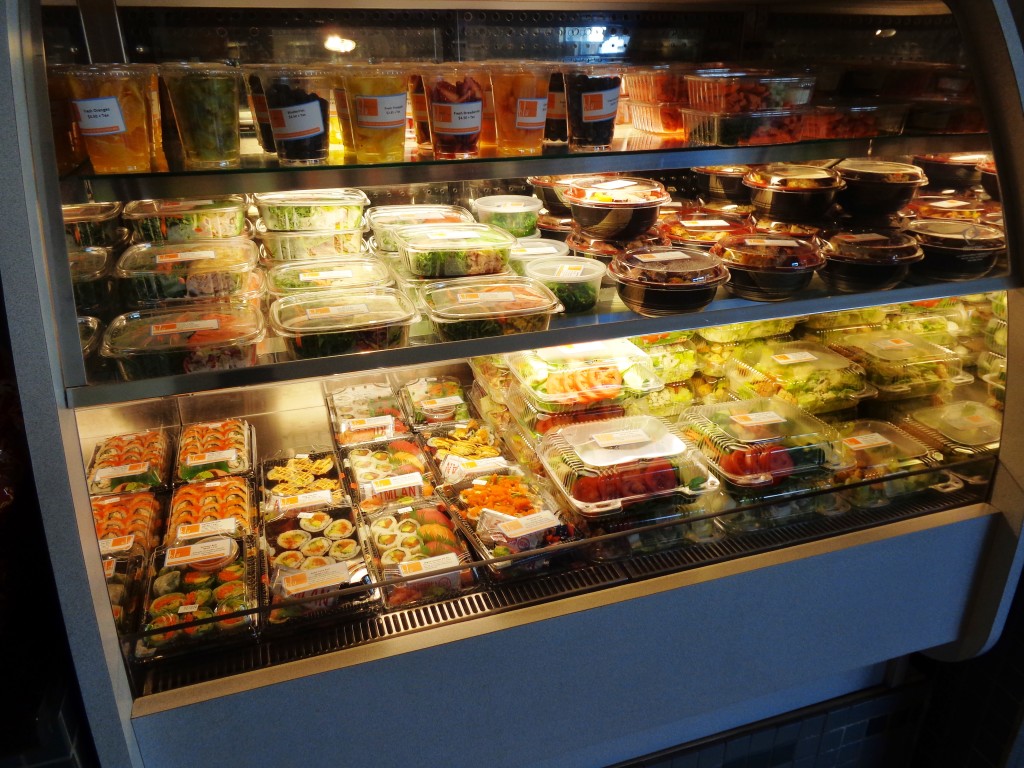 Because I was visiting the gym on a guest day pass, I did speak to a membership director before the class. He told me that the monthly rate for membership was $185 per person, which is pretty steep. However, that includes the full class schedule and access to everything.

I don’t think I will be joining anytime soon, especially since I can attend so many gyms around San Francisco for free as an instructor. But it’s super nice, and might be one of my top choices if I needed a new gym.

After my experience yesterday, I’m definitely going to have my eyes and ears open for the next Tara Stiles event as she travels from city-to-city, and you should too. Strala yoga is absolutely worth a try, especially if you’ve been turned off by other yoga classes before. This one lets you feel good.

For more on some of my recent yoga experiences, check out my reviews of Urban Flow, Bikram in North Beach and Iyengar.

Have you ever tried yoga? Are there any types of workouts that you are hoping to try soon?