You win some, you lose some.

This week, I substitute taught an extra BODYATTACK class for an instructor who was away, but I also had to miss one of my own BODYATTACK classes due to a conflict with my day-job during the week. When I showed up to the gym on Saturday morning to teach, I saw the leftover flyer near the check-in desk notifying members that Thursday’s regularly scheduled BODYATTACK would in fact be turned into a BODYPUMP, with apologies for the unscheduled late-notice and change.

This change had to happen because no other BODYATTACK instructors could cover for me, so my group fitness manager allowed me to find someone to teach a BODYPUMP class instead. So sad. I hope the members aren’t upset with me when I return this Thursday to the regularly scheduled programming. I rarely get subs for my classes, because I like to show the members how important it is to be consistent with their workouts. So while it was a rare occurrence for me to miss, it certainly bothered me.

I quickly got over seeing that flyer on Saturday morning, when I had some friendly international visitors in my class.

There was a woman from Germany and a man from Holland, who both worked for different airlines and both found their way into the City (which is 30 minutes from the airport) just to take a Les Mills BODYATTACK class before they took off again. I knew from the second he entered the room that one of them was a fellow Les Mills instructor. Not only did he set up in the front row and display excellent form with his kicks, jump-jacks, plyo lunges and tuck jumps, but he also had on a blue and yellow official BODYATTACK shirt.

I LOVE to have other instructors in my classes, especially when they come from far and wide and share that same passion as I do for group fitness. Everytime I knew a moment of fitness magic was coming up, I’d look at him right in the eye and he’d do it with me. So fun! (Notice my use of FitSnap for this picture, an app I mentioned on my first list of Cool new stuff.)

Dave picked me up from class (so I didn’t have to walk 30 minutes back up the hill), and we went to Safeway to load up on sustenance, then spent a few hours on the couch. Saturday afternoons are basically our only free down-time these days, and boy, do we treasure it.

In other news, Dave’s parents have officially moved to the West Coast.

It was more than a year ago that they decided they were ready to leave Florida behind. And that they did.

They arrived in Sausalito last week (over the Golden Gate Bridge from San Francisco) to take residence in a short-term rental for a few weeks while they decide which California city they will land. Current choices include: San Diego, Monterrey and San Rafael on their short-list.

Last night, we made our first trip to visit them in Sausalito to see their little place and have dinner. We were joined at dinner by Dave’s visiting aunt, uncle and cousin from Iowa, and his sister, who drove all the way from Oakland in the East Bay.

Our party of eight walked to dinner from his parent’s place, dining at Barrel House Tavern on the water. The food was excellent. I enjoyed a butter lettuce salad and the popular wood-fired trout, which was served in a ceramic dish with the whole fish, including the head and eyes. Yummy. Check it out … 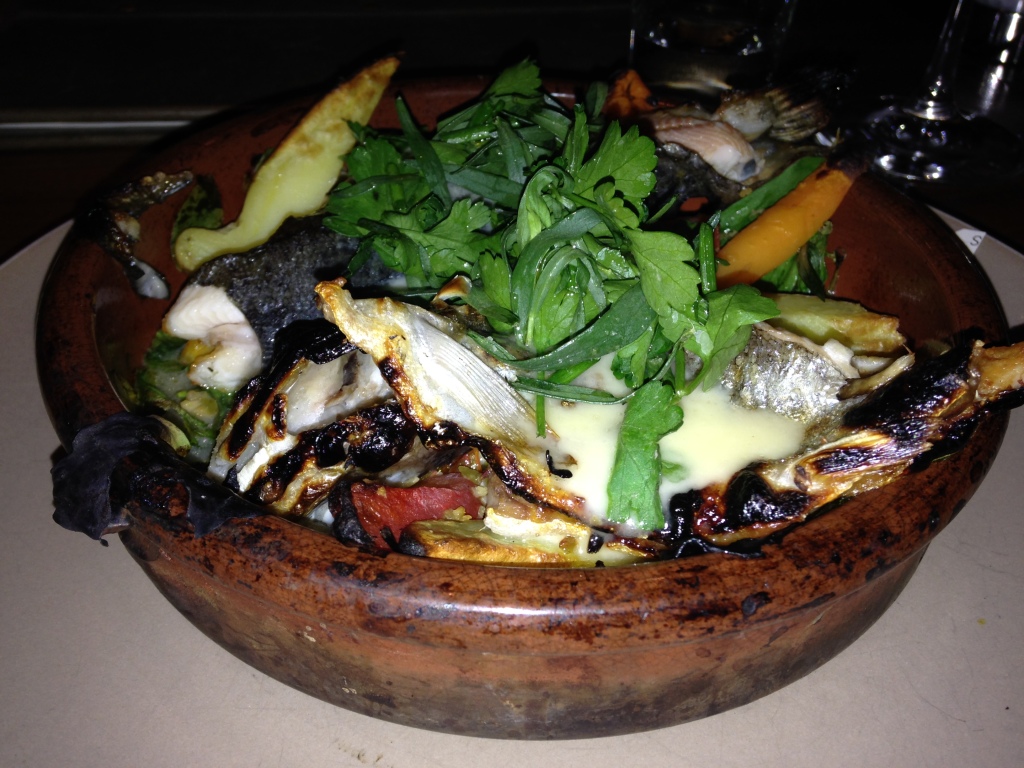 Sausalito is a picture-perfect little town, where people bike and walk the street that lines the coast. We’ve been there a few times before, including an epic bike-ride, a visit from my girlfriends and a visit from my Mom. We’ve always said that one of the best parts of Sausalito is the views of San Francisco from across the Bay.

Yet, we had never been there after dark. Night life = not so much. After dinner, the town was totally dead and the streets had completely emptied out.

We walked back down the empty sidewalks in the chilly breeze and stopped for a photo-shoot in the lobby of his aunt’s hotel. I set up right in front of the grand fireplace to warm myself as we said our goodbyes. 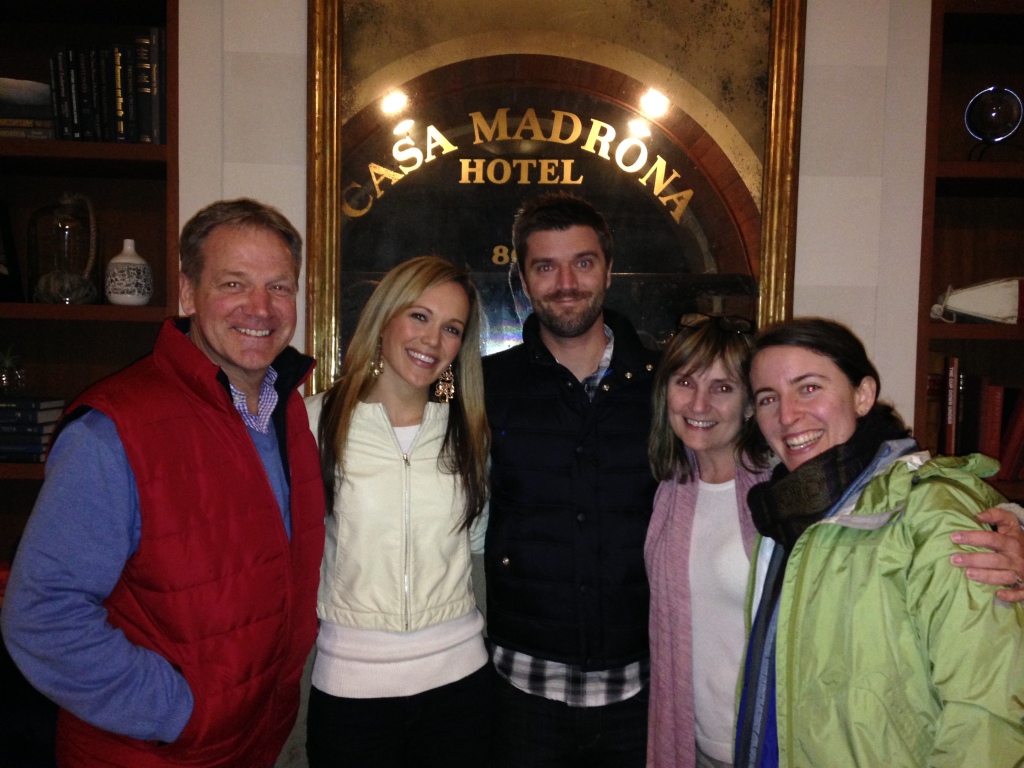 There you have it. Another Saturday full of group fitness, laundry, grocery shopping, catching up on TV and dining out on fresh seafood. Although last night, we got home at a much more reasonable hour than the week before’s shenanigans.

And just like that, it was Groundhog Day, and we’ll do it all again.