San Francisco is one amazing city. After yesterday, I can truly appreciate the uniqueness of the population that makes up this great place, because I finally did something that all San Franciscans must do.

Bright and early Sunday morning, Dave and I joined the fun of the “Bay to Breakers” event, which is the oldest consecutively run annual footrace in the world, first taking place in 1912.

What is Bay to Breakers

Each year the race is a glorious celebration of the human spirit – a giant wave of athleticism, fun, frivolity, and determination flowing across the City from the Bay to the Pacific Ocean.

That’s right. San Francisco is seven miles across, from one coast to the other, and this race goes right through the City.

There are plenty of serious runners with race-numbered bibs who take off on the challenging course without stopping to joke around. This year’s winner, like last year’s, was a Kenyan who finished the 12k race in just 35 minutes and 10 seconds.

Other than the real runners, there’s the rest of the City — more than a 100,000 costumed crazies, who were walking, jogging, hopping, dancing or just watching the course from the race route.

Dave and I joined nearly the same group from our awesome camping trip the weekend before. But this go round, we weren’t decked out in sweats and casuals, we were in costume. Dave and I got our costumes last minute on Saturday afternoon via a quick Target trip. I found my Snow White princess dress in the children’s toy department. I couldn’t believe I could put it on my body, but once I did, I knew it was perfect. The rest of our group stuck to a cereal theme, and Dave was a cereal eater, outfitted in pajama pants. Therefore, we dubbed the hashtag of the day #TheBreakfastClub, and I added #WithaPrincess.

Here we are in all of our glory … 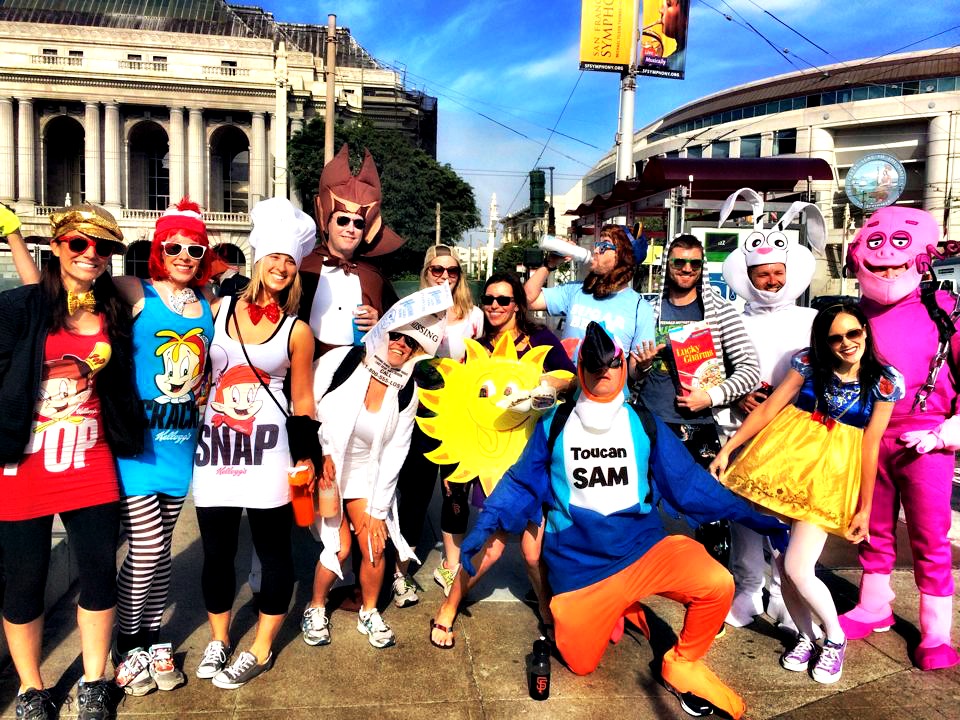 Can you name some of the cereals shown above?

Just like the camping weekend, in which there were some professionals among us, a few of the people in our group have been doing Bay to Breakers for years. That meant we had a full game plan in place days ahead-of-time and a detailed group email going around with instructions for participation (hydrate, hydrate, hydrate was on that list).

We met our group at a bus-stop just before 8 a.m. This was a strategic move, as the City is very crowded and roads are closed.

I was smiling ear-to-ear with my surroundings in an instant. There was even glitter blowing in the wind for no reason. True story.

We hopped on the 47 bus, and to our delight, the driver let us all board for free in honor of Bay to Breakers. Right off the bat, we met friends dressed in tie-dye. 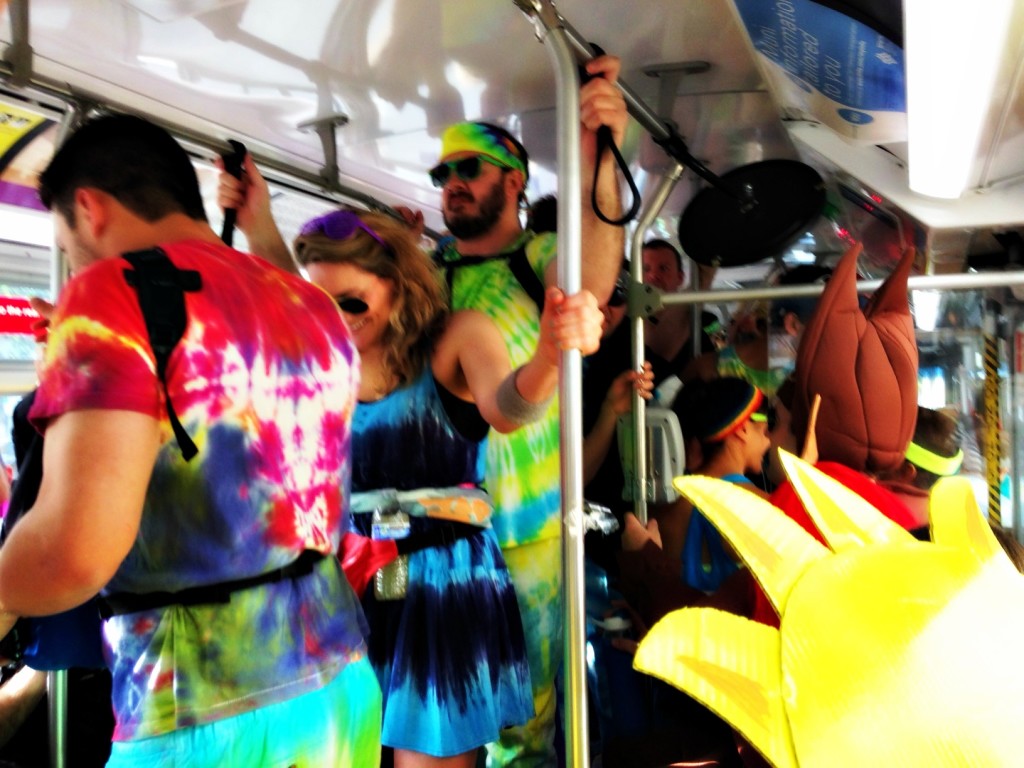 We got off the bus around City Hall and began walking the race route. Yes, we saw plenty of naked people. (Fun Fact: Nudity was banned in San Francisco just about a year ago, but Bay to Breakers is one of the days of the year in which it is totally allowed.)

Don’t worry, this is SFW (safe-for-work), because I’m not going to share the juicy photos.

Here are a few shots of the course … 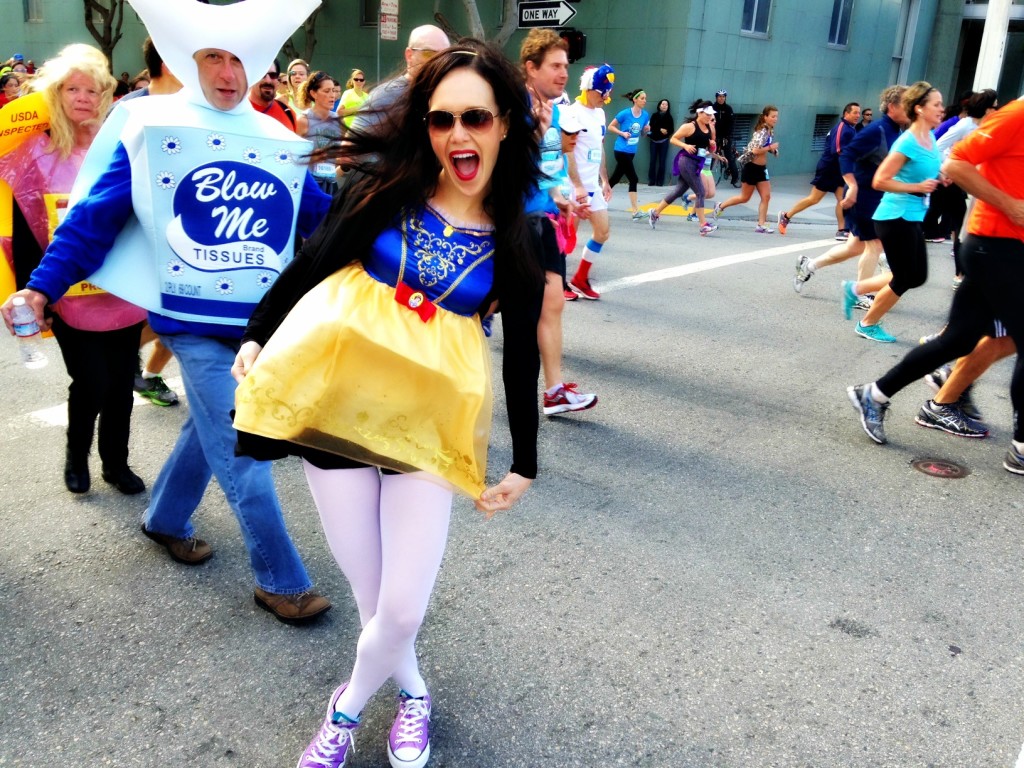 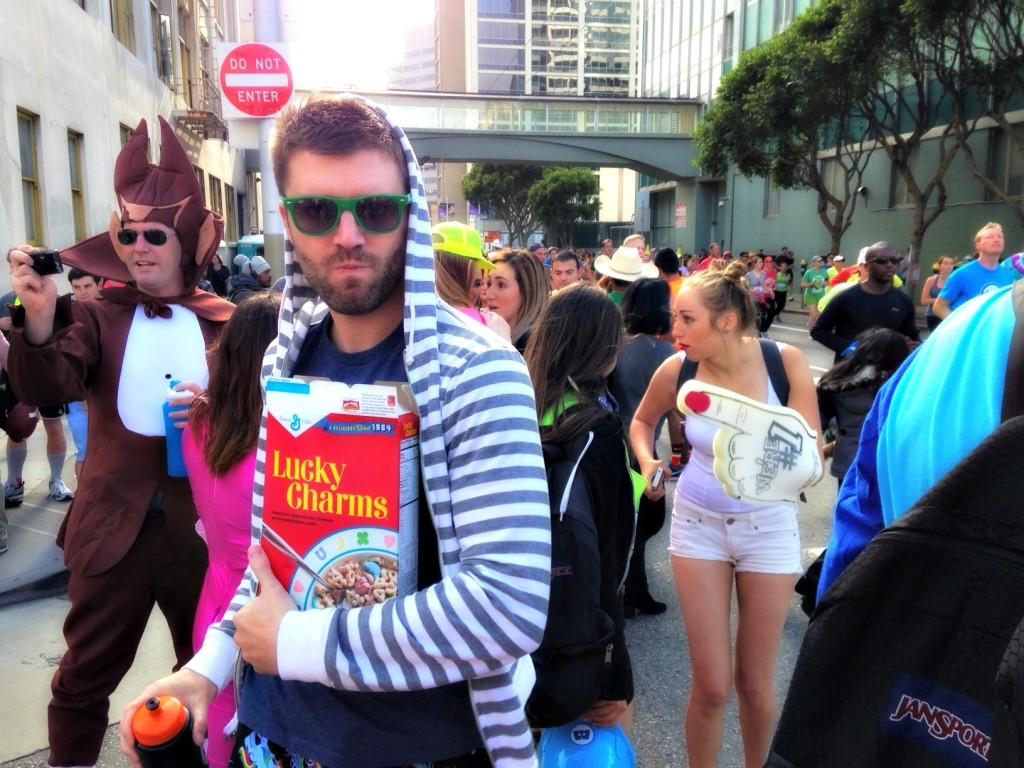 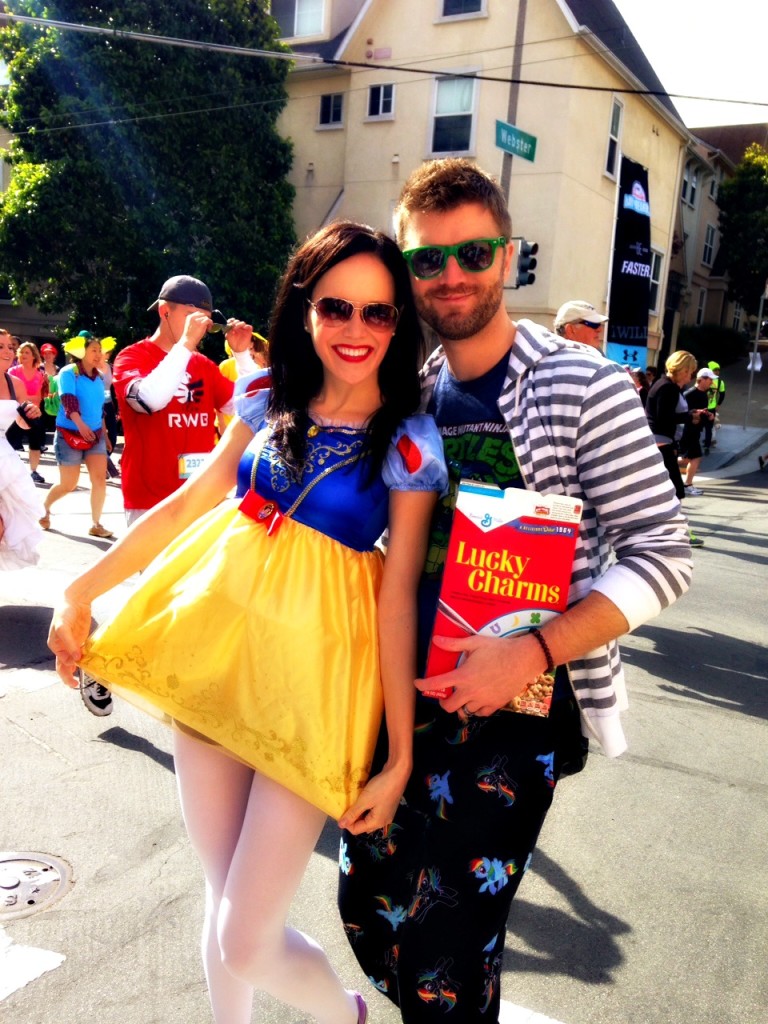 We did see some marginally competitive runners who were wearing the official race shirt. But mostly, we saw fun-loving people, who were smiling and enjoying the rarity that is Bay to Breakers.

There was even a group dressed in salmon costumes, who were heading upstream and against the flow of the course. Apparently they do it every year. 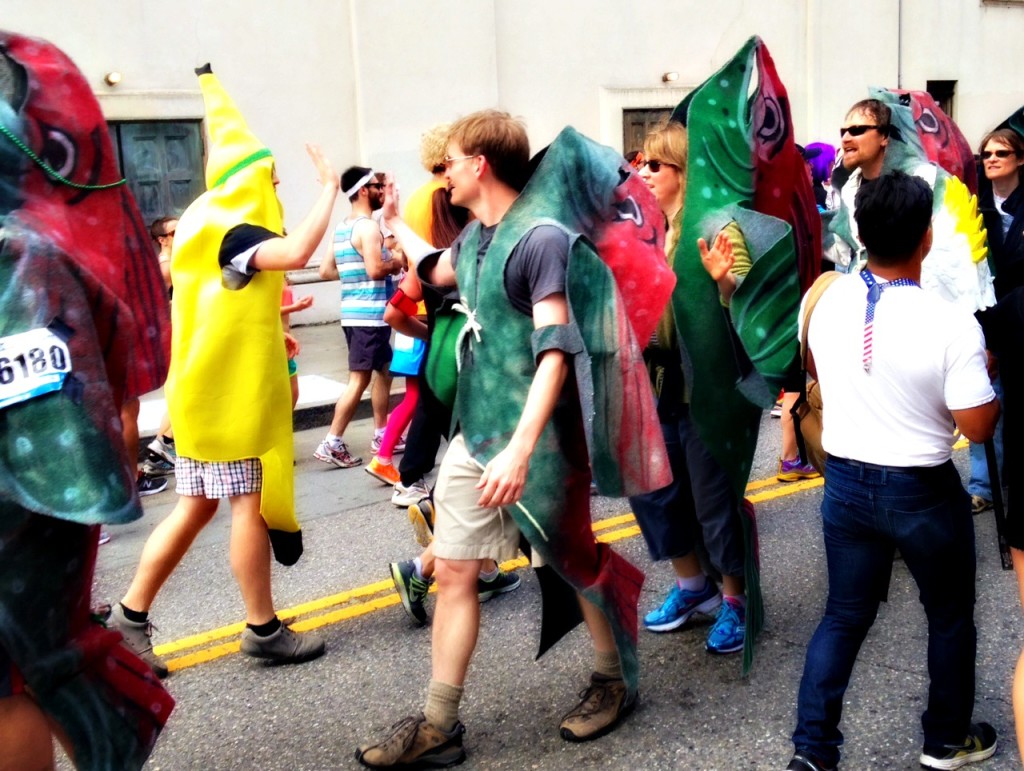 We walked the race course for a little more than two miles, taking our time, and enjoying the scenery. There were crazy house parties along the way with speakers blaring. I especially loved this one that offered its own hashtag for music requests. 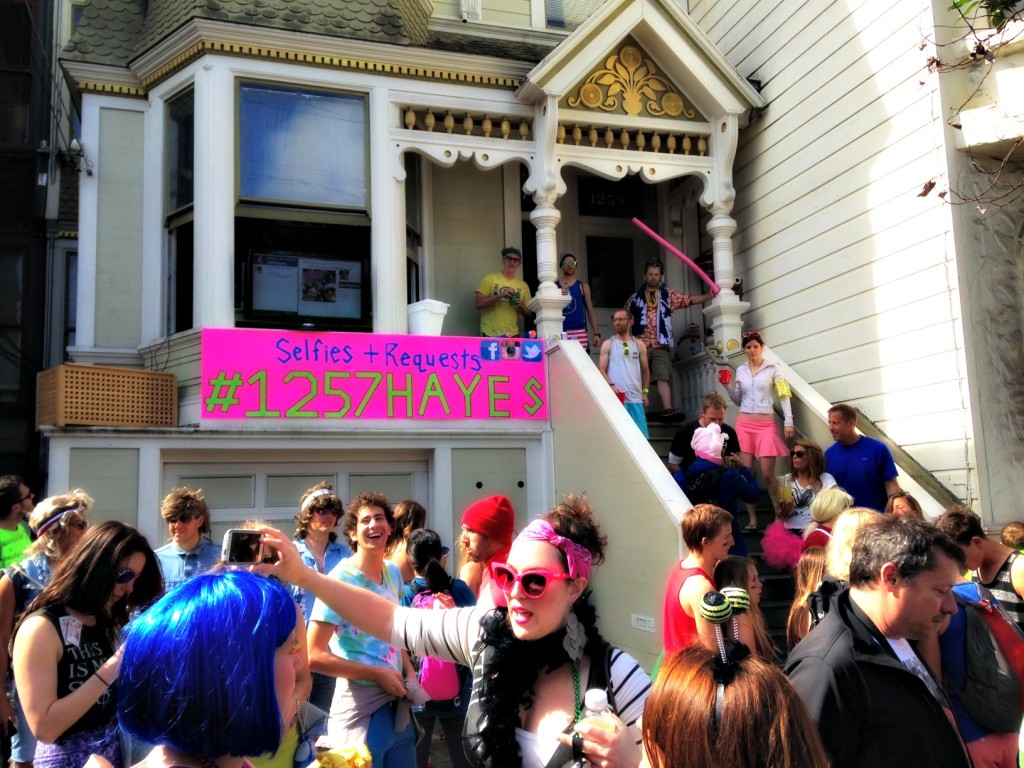 We even got free healthy snacks … 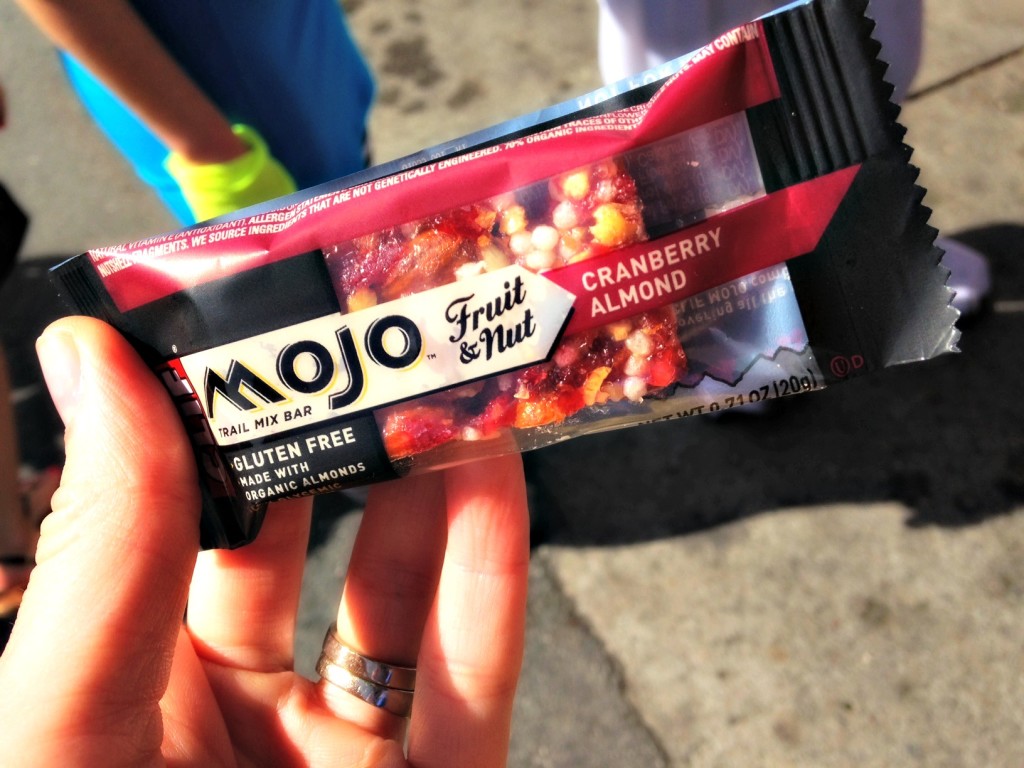 And saw some really cute costumes … 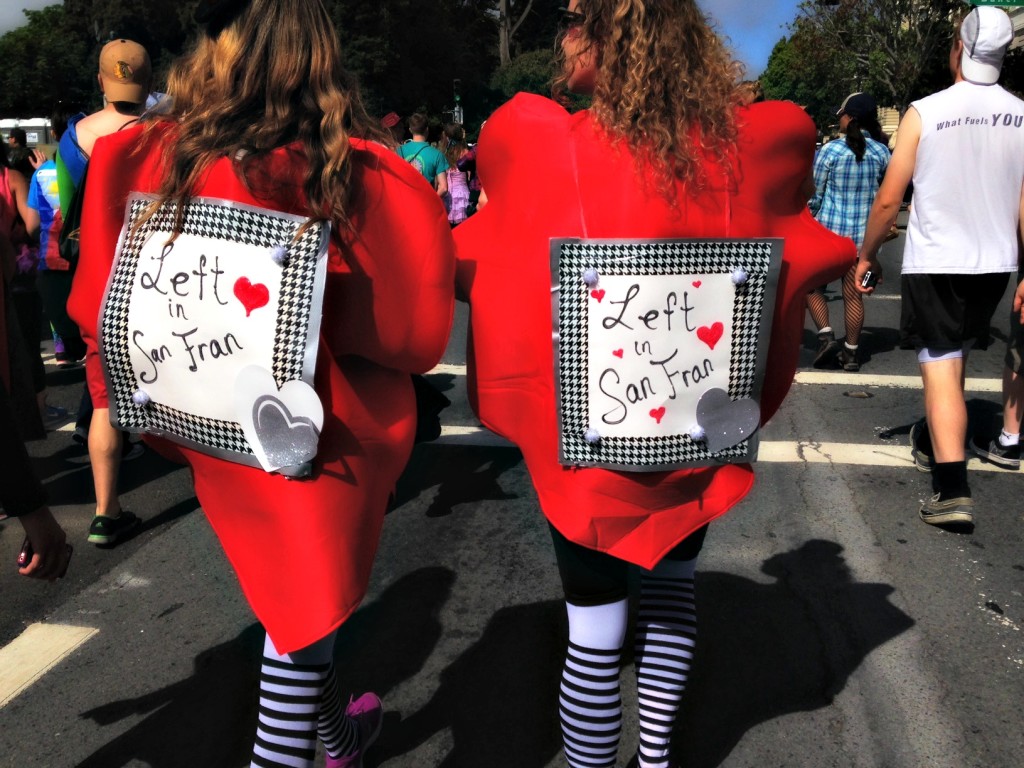 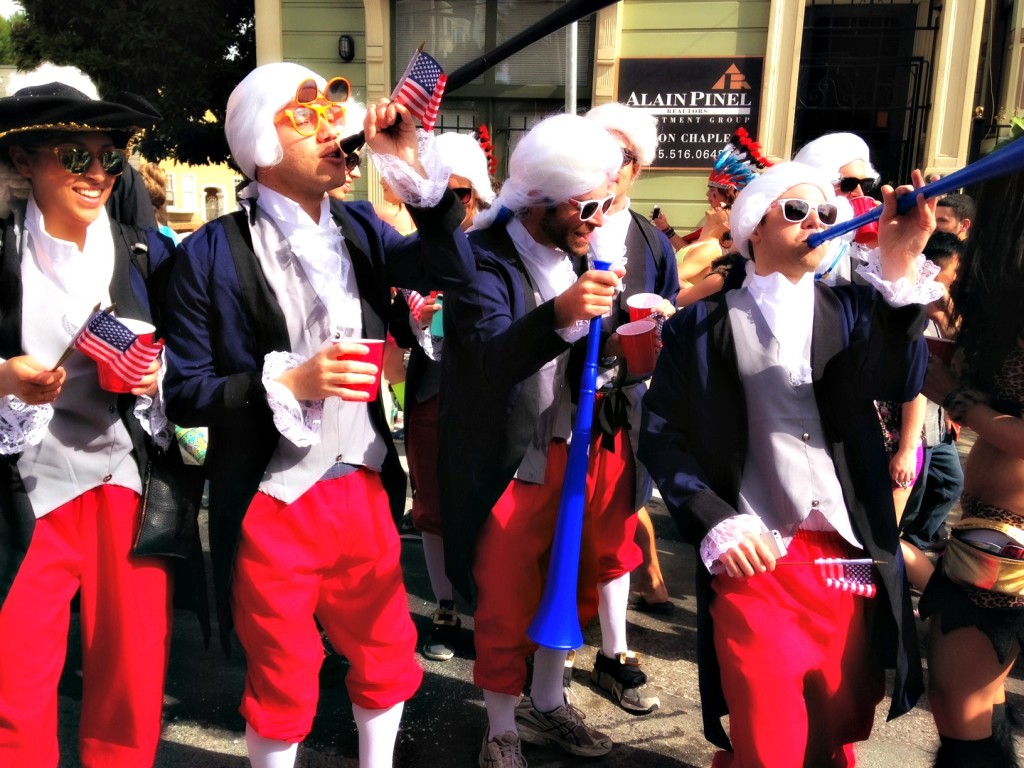 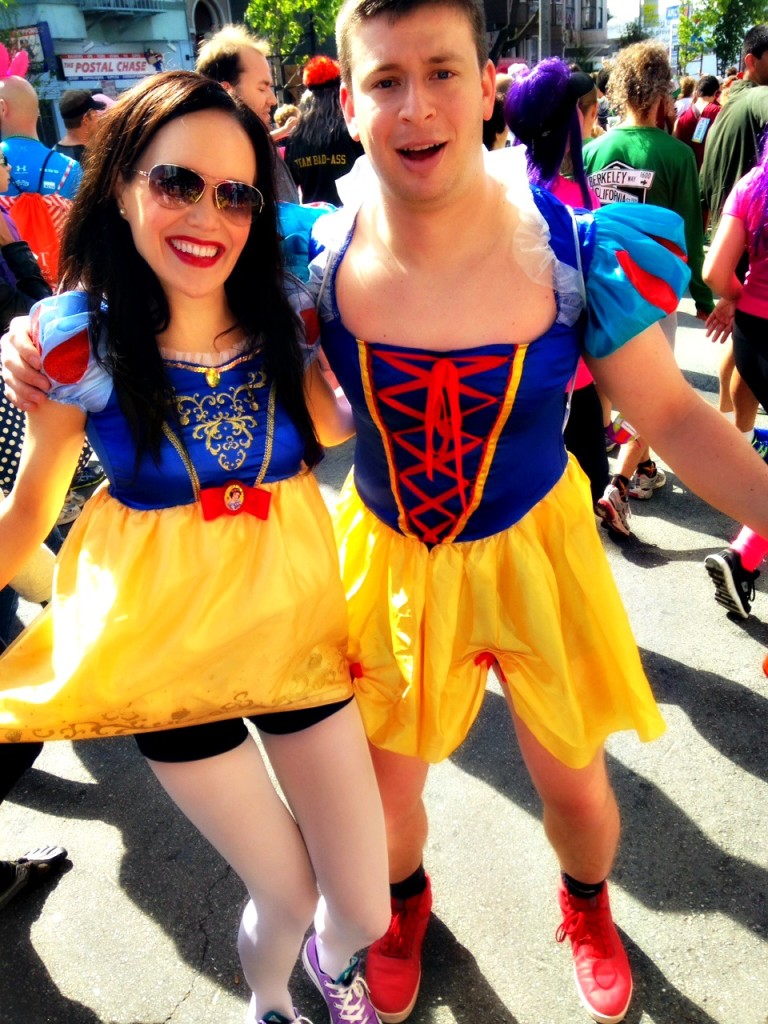 Our group was smart enough to park a car a day ahead-of-time full of food and drink, which we walked to. Then we took our supplies with us to Golden Gate Park to set up shop for a while. There we had a shaded area to hold camp, but mostly we continued to watch the course, make friends and take plenty of pictures. 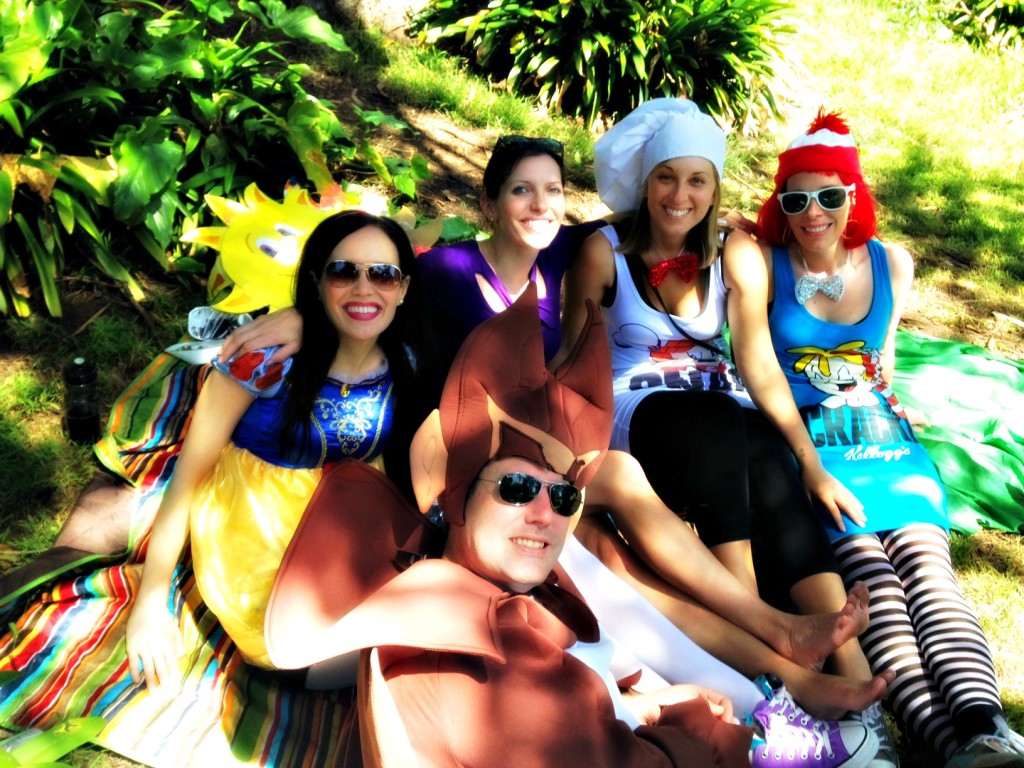 The race continued on past Golden Gate Park to the beach, but we purposefully didn’t go all the way to the finish line. 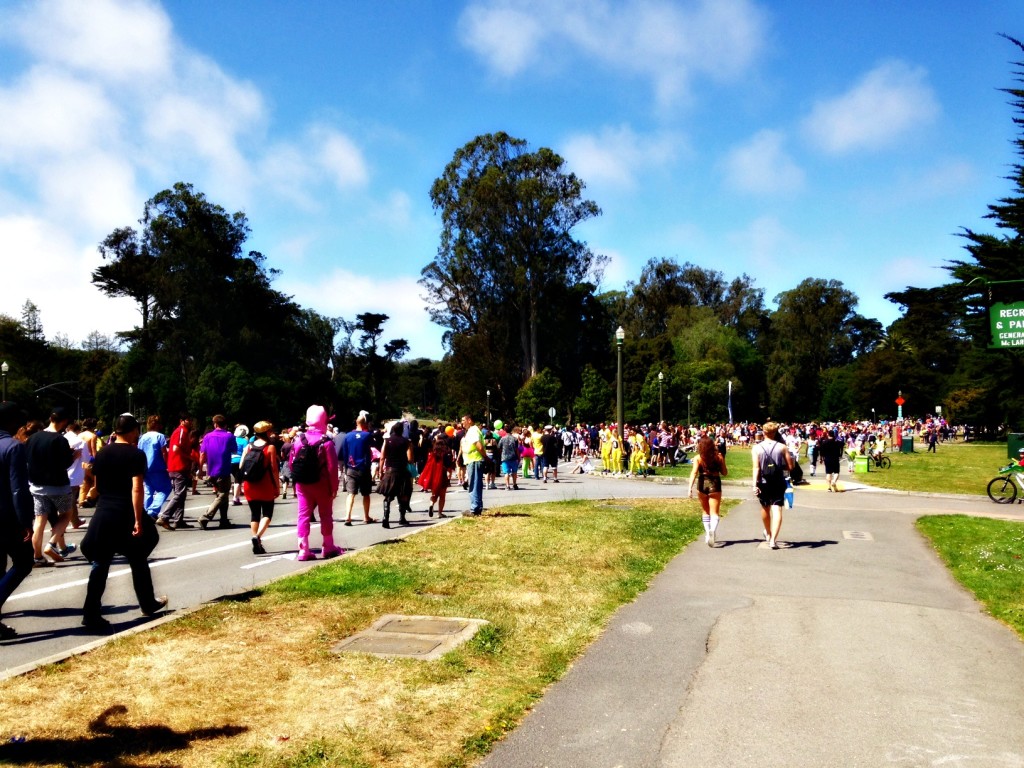 In fact, we hadn’t even registered for the official race (nor do most people) and we only picked up our pace into a real run a few times, and that was just when one of us fell behind the rest of #TheBreakfastClub pack.

I actually got a few good compliments on my get-up, even though it was completely on the conservative-side of what was out there.

I mean, it’s not everyday you get to wear plain-white pantyhouse with Converse sneaks and feel good about it. And of course, I tried to stay in character all day with the following pose. 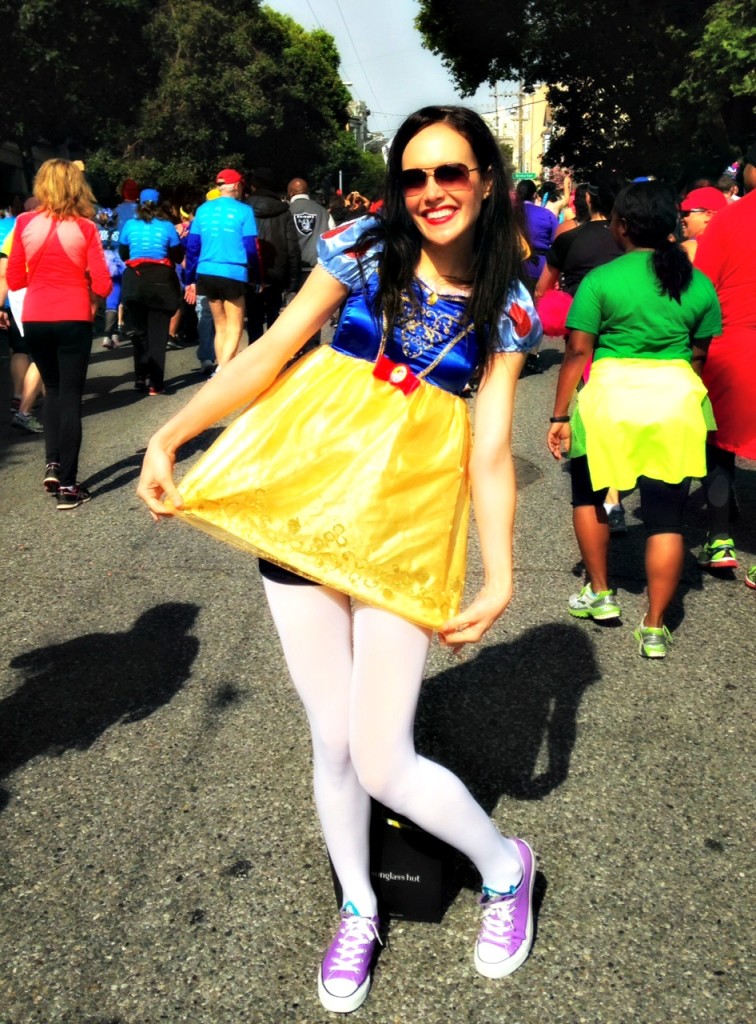 By about 1:30 p.m. it was time to hit the road. The remaining part of our group walked to the Hayes Valley neighborhood and filled up on a nutritious lunch at The Herbivore before going our separate ways. Dave and I went home to nap for a bit and wash off the fun. Then we ordered take-out sushi and watched an episode of House of Cards on Netflix. We were spent!

Reflections from a first-timer

Dave and I waivered on whether to do B2B this year or not. It requires a lot of effort to find a costume (which ended up being easier than expected), pack your gear, wake up super early on a Sunday and go. But I’m sure glad we did.

It felt fun. It felt light. It felt like a day meant to bring happiness to everyone. I had been told before that Bay to Breakers is one of those things you have to see to believe. It really was. It was an amazing display of each and every type of person that lives in the Greater Bay Area, all coming together to move, play and celebrate “Everybody’s Favorite City.”

Everyone else, does your city have an annual event that brings together the entire community to celebrate?