Hey, friend! A new one coming at you today! Listen, I’m all about the real thing. But sometimes, there are affordable imitation items that work out really well.

I thought it would be fun to show you just three things I’ve bought in the last year or so, which are cheaper knock-offs of some more expensive items and are totally worthy of substituting for. 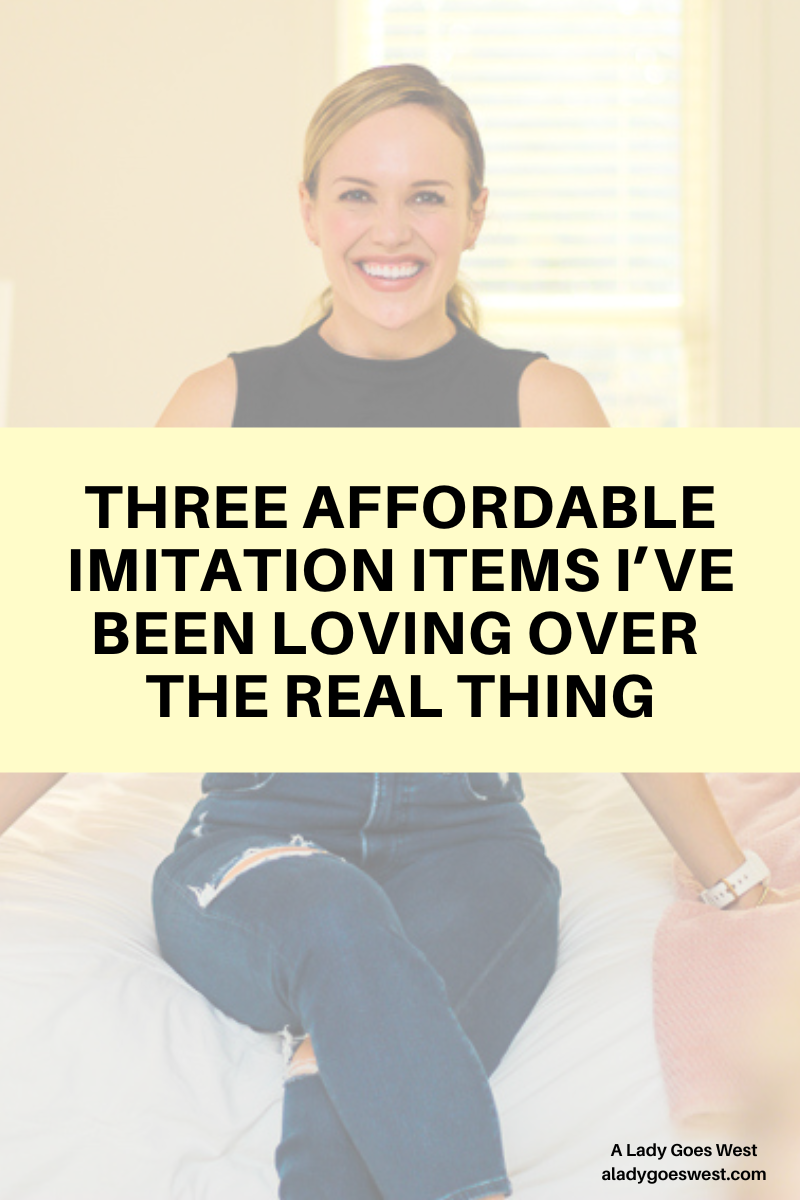 So a bit of a sad story, but I had some beautiful real diamond stud earrings with screw-on backs that my dad bought me for my 21st birthday. For 16 years, I wore them five days a week at a minimum, always taking great care of them. Then, one day last year at the gym, one of the studs fell out while I was washing my hair (the screw part had gotten loose over the years), and I was devastated. I asked some gym friends to help me search for it, and we came up short. But a little bit later, one of the awesome Life Time maintenance people found the earring in the sink. I hadn’t even gone to the sink. It was amazing. I felt so lucky to have it, and I promised myself to be more careful with them, because I loved those earrings so much.

Well, about a month later, the same stud came out again at the gym, and we weren’t able to find it that time. It was officially gone. Not only was I sad to lose a real diamond, but I was sad to lose a special gift my dad had given me. I was pretty down about it for a while.

I wore some other stud earrings for a few weeks that I didn’t love. And one day, I was talking to a friend at the pool about my earring loss, and she mentioned she wears cubic zirconia studs as opposed to real diamonds when she’s at the pool or doing other stuff where they may get lost. A light went off for me. I really had not even thought about cubic zirconias, a much cheaper option, which if lost, wouldn’t be such a big deal (because I definitely wasn’t planning to replace the real diamonds with real diamonds after seeing how much that would cost). 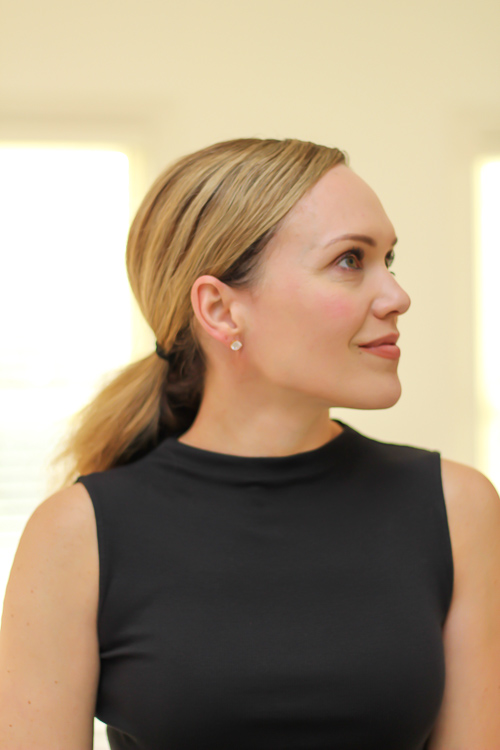 I looked around on Amazon but wanted to see the cubic zirconia earrings in person to gauge the size and look, and I actually found these little beauties during a mall trip with my mom, Dave and Brady. Literally, since the day I’ve bought them, I’ve worn them maybe six days a week, all day. They never move, they never fall out, they don’t show their age, and they also don’t show the fact that they cost less than $30, but they look like a million bucks.

I’m a total convert! Yes, I have a couple real-diamond pieces of jewelry, like my wedding and engagement rings, and a pretty ring Dave got me for our 10th anniversary. But other than that, I’m good with the fake stones. I’m not scared to lose them, and they look just as sparkly, most of the time. A win-win for me and my wallet!

Okay, I’m making myself out to sound irresponsible with my belongings, but I’m really not. I am, however, guilty of losing two sets of fancy Apple AirPods. The first time I lost just one of them, and the other one fell into an air vent into my leased car back in California, and we never got it out, and then I returned the car. It was super annoying and not useful to only have one. Therefore, that set was trashed.

Then, I got a new set of AirPods, and earlier this year, I left them in a robe pocket one day when I was at a spa. I had the carrying/charging case, but I left the actual AirPods, and they were never found in the laundry at the spa, even after I called and asked them to check. Once again, a total fail, and I was pretty upset with myself about this loss.

Rather than buying another set of pricey earbuds (that I didn’t really deserve at that point), Dave suggested we get me some fake AirPods. He found some on Amazon and ordered us both a set. They were less than $40, and I’ve been keeping them safe ever since. 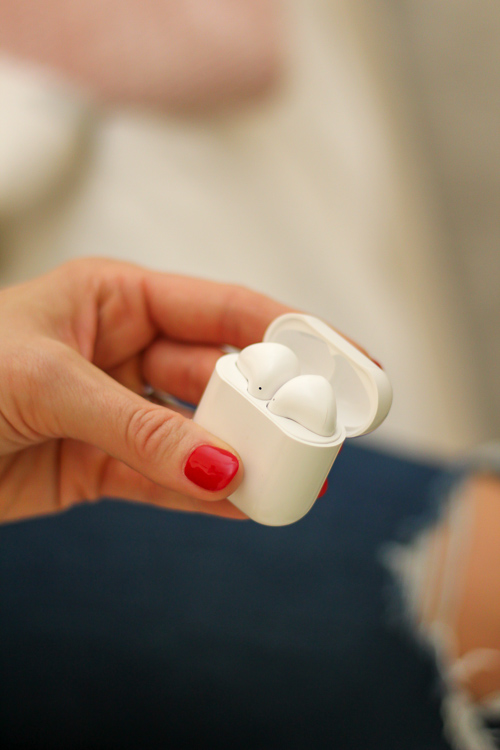 Now here’s the deal, these don’t have quite the stereo/sound quality that AirPods have, but they do everything else nicely. I also like that I don’t have to be so worried about them all the time. And of course, because I’m not as worried about them, they’ve stayed super safe.

I wear these for workouts, to do my meditation if I’m not at home with my bigger headphones, and I always wear these for my Sunday walks when I either listen to a podcast or review my class choreography for the upcoming week. They work great, and they’re so very similar to the real thing.

Yes, I love Apple products and am typing this on a real MacBook Air, but I also love a deal and finding good substitutions for really expensive items I need. This is definitely a good substitution for me.

Find the fake AirPods I use here.

I officially stopped buying expensive sunglasses shortly after I became a mom, so this is one area where I’ve been saving for a while.

I have three pairs of sunglasses right now, and all of them cost under $65. My favorite brand is Quay, which you can get at Nordstrom, and they look about as cool as all the other designer varieties (they are all pretty similar to Ray Ban, so that’s the comparison here), but they hover around the $60 mark, instead of the $200-$300 mark, which is just far too much to pay for sunglasses, if you ask me.

I find that I’m not very careful with my sunglasses. I sometimes don’t put them back in their case before they head into my bag. And I’m constantly dropping them or sitting on them. Before that, Brady was always pulling them down or throwing them, so I knew I needed to stop investing in sunglasses, because they kept getting ruined. 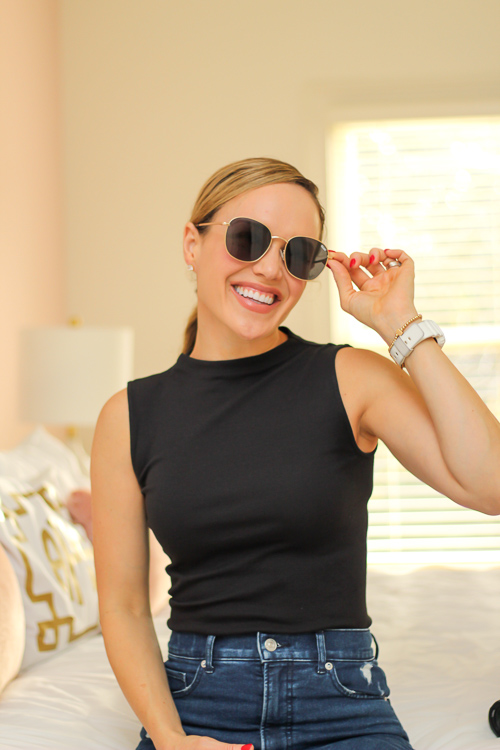 I was hesitant to buy cheaper ones at first, but now that I’ve been doing it for a while, I see that sunglasses are an area where you don’t need to spend too much to be pleased.

I even have a polarized version of cheaper sunglasses I ordered online a while back. I’m a fake/cheap sunglasses convert.

And what will I do with all that money I’m saving on sunglasses? I don’t know … maybe buy myself a pricey piece of cheesecake at The Cheesecake Factory, because dessert is an area where I prefer the real thing. We all have our standards in different areas of our lives, right?

And that’s it for today all about affordable imitation items!

In conclusion, yes, I love to get the real thing (especially when it comes to food and clean skincare), but with these three items, I’ve found that the cheaper/imitation alternatives are working great for me right now.

Thanks for stopping by the blog, and have a great day, my friend.

Also, a special shout-out to my photo assistant, shown below … 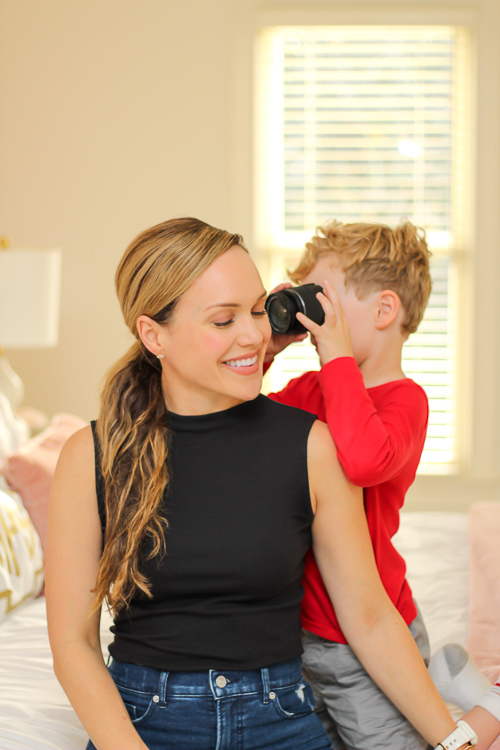 Questions of the day for you

Do you have any “fake” pieces you really love that are worth sharing with us?

What’s one good thing going on in your life right now?