Last night, I was invited to attend the “Fall into Fitness” party held by ClassPass, which is a cool service that recently launched in San Francisco offering access to private studios around the city for a monthly membership. I became a quick fan of ClassPass while trying out a complimentary month and have gone to tons of local studios and gyms through the service.

The party took place at Studiomix SF, which is a massive multi-room studio on Van Ness Avenue in the center of town that I’d never been to before. I was blown away by this place. There was a cycle room, main group studio, TRX room, strength room, core room and a climbing room in more than 30,000 square feet of space, designed just for classes and personal training. I was super impressed, and I didn’t even get to see all of it. 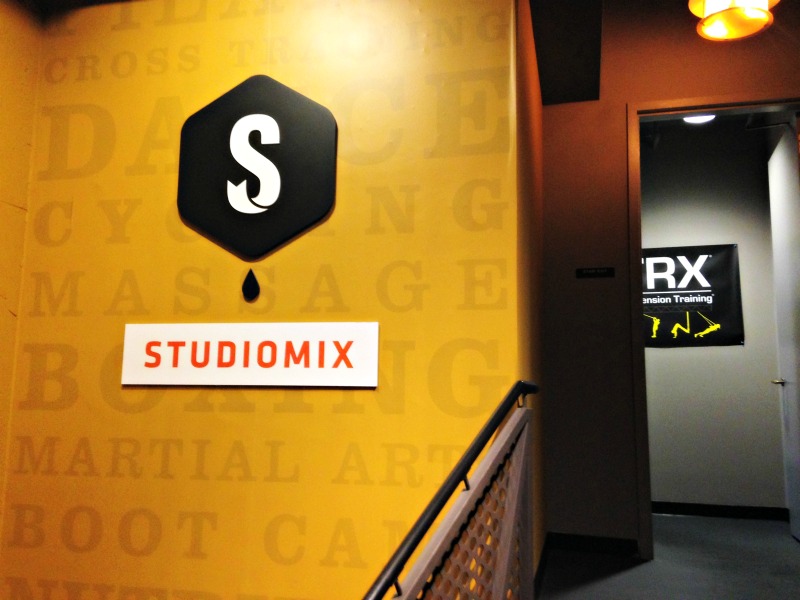 The bottom floor of Studiomix is housed in the same building as a movie theatre.

The ClassPass party attendees were able to select a class for the night, and I chose TRX. I had taken one TRX class before at the flagship TRX Training Center and was eager to do another. And of course, the class took place in Studiomix’s dedicated TRX room, which was dark and airy and had set-ups for about 20 people or so. 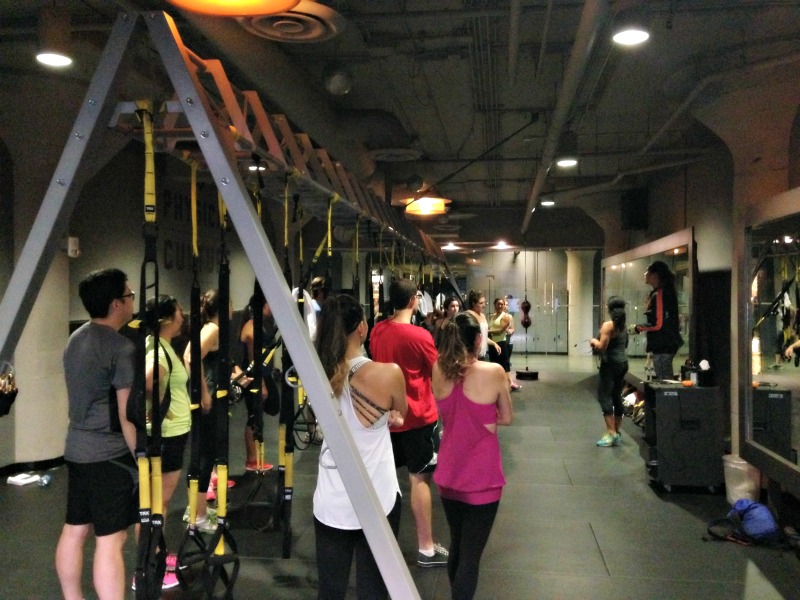 A shot from the end of the room as the instructor welcomed us to class.

The class was taught by Vanessa, a Bay Area instructor who I recognized from Equinox. While the class seemed a little longer than 45 minutes, it went by quickly. We started with some stretching using the TRX, then went into a cardio circuit on the floor away from the straps. The warm-up included jumping jacks, high-knee runs in place and push-ups. When we started doing high knees and jumping jacks, I was not excited to be in another cardio class, as I get plenty of cardio with the three Les Mills BODYATTACK classes I teach per week and had been expecting more resistance work for some reason. Yet, the cardio bursts were less than five minutes each time and weren’t bad at all.

From there, we went into several exercises using the TRX. Vanessa set the class up so that we did a series of three or four moves, then repeated them all. The circuits included TRX lunges, TRX squat jumps, TRX push-ups, TRX pistol squats, TRX planks, TRX crunches, interwoven with cardio circuits away from the TRX. Vanessa would demo a move on the TRX, then move away and walk around and coach people. She had the music blasting and did a great job of providing set-up and follow-up cues, which is something I look for in an instructor. She also encouraged us to count out loud and let loose like children. She didn’t want a bunch of boring adults in her TRX class. Well said.

TRX Blitz offers a workout for all levels

There were definitely all levels of fitness among the participants in our class, and Vanessa offered low options and no-impact options for everybody. In fact, if you’d never done TRX before, you could safely get through this class, because she explained everything thoroughly and didn’t move very fast. Not to mention, we never changed the level of the straps, which was one of the most challenging things for me in the first TRX class I took. Yet, the hardest moves of the day were certainly the TRX pistol squats (one-legged squat) and the TRX crunches at the end. Those moves had my legs and core burning!

The class ended with a five-minute stretch, and then Vanessa closed out by having us put our hands in prayer and say “Namastizzle,” which was a totally funny way to end.

After last night’s TRX class, I’m even more of a believer in this modality for working out. I love the way that you can challenge your body to increase flexibility, strength and cardio stamina with just two straps. And somehow, it feels so much easier on the joints than actual weights.

Even though there were moments of challenge, Studiomix’s TRX Blitz is not as intense as the TRX Circuit Challenge class I took at the TRX Training Center. That one was not for beginners and moved a lot faster with harder moves. However, having done a brief workout earlier in the day in the weight-room, I was perfectly satisfied with the level of challenge offered. Would I go again? Yes. If only just to hear Vanessa say “Namastizzle.”

Because I was there to support ClassPass during it’s fall party, I walked out of class to hear pumping music and see crowds of sweaty people in the main studio lobby, who had all just taken other classes. Although there was a loud DJ and plenty of wine designed to keep the party running all night, I was actually pretty tired post-class and didn’t stay long, outside of a quick chat with Vanessa and picking up my swag bag. But first of course, I had to try the new Passion Fruit flavor of Zico coconut water, and it was quite tasty. I usually prefer the plain flavor, but this one was good. 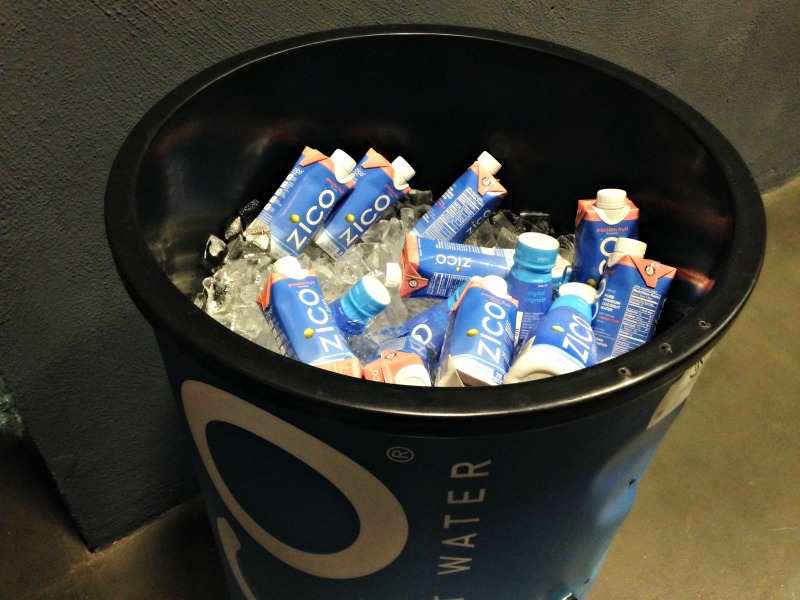 Thanks to Zico, one of the event sponsors, for all the hydration.

There were definitely more people than I expected at the event, and it was a little bit overwhelming to move around. I’d imagine ClassPass wanted to use the chance to thank all of its members, so the more the merrier. And with a facility as big as Studiomix, they might as well have filled up all the rooms they could. Speaking of Studiomix, if you’re a Bay Area resident looking for a place to take classes, I’d check it out. I’m definitely interested in seeing what else is on the hefty schedule, because I want to explore all the other rooms. 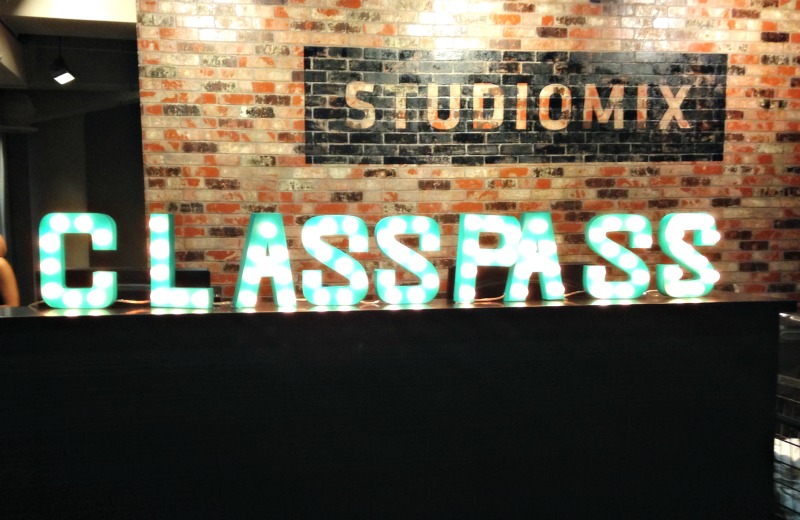 How much do you love the ClassPass name in lights? Such a good touch!

Before I left, I said my goodbyes to the ClassPass folks, zipped up my hoodie and hoofed it home. I walked in my door just after 8 p.m., and didn’t even open the bag of goodies until the next morning. It was pretty good and had a few of the same items I received at the ClassPass launch party. I’m most excited about the $20 Uber credit, because I know I’ll use that one soon, perhaps on my way to the airport on Friday morning. 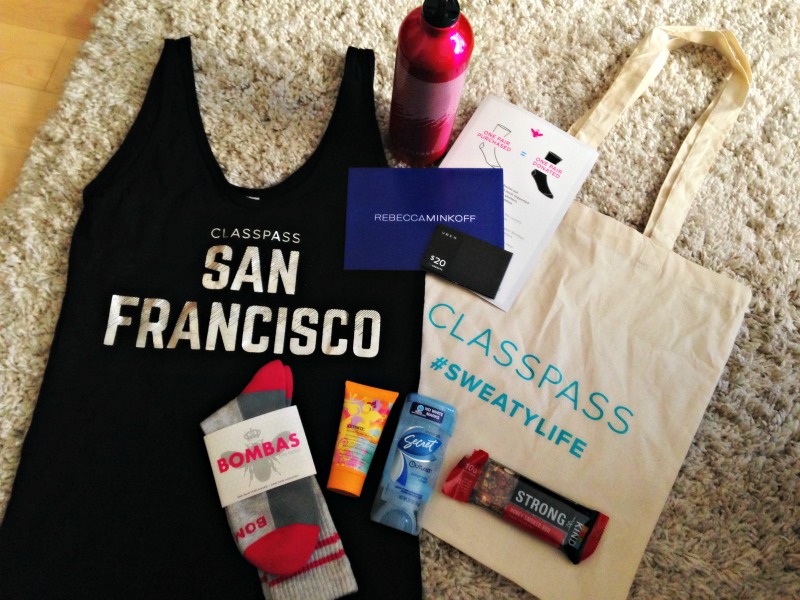 Those socks? They look pretty cushy. That KIND bar? That will be stashed in my bag on my trip this weekend.

There you have it, another successful ClassPass experience in the books. I’m so glad I’ve been introduced to the service and they keep inviting me to try classes and attend events. It’s a pretty sweet deal.

And now, I’m off to teach a double-header of my own group fitness classes. Have a great evening!

If you’d like to see more of my recent class reviews, may I direct you to the following posts:

Have you ever done a TRX class? What’s your favorite non-water beverage? Are you a coconut water fan?