Over the past few days, I’ve visited two private yoga studios in San Francisco, thanks to my month-long membership in ClassPass.

Both experiences have had their pros and cons. Now, let me preface this by saying I’m not a yogi, nor a yoga lover. I try to go to one yoga class a week, simply for the benefits of breathing and stretching. Over the years, I’ve tried several different types of yoga (recaps on the blog include: Ashtanga, Bikram, Strala STRONG, Vinyasa, Iyengar), and after all that, I’ve decided that basic power vinyasa yoga is my favorite.

I look for a class in which the moves flow fairly quickly, the teacher offers plenty of modification options to make poses harder or easier and also adjusts participants in the room by walking around and touching. Music playing in the background doesn’t hurt either.

Here are my experiences as of late … 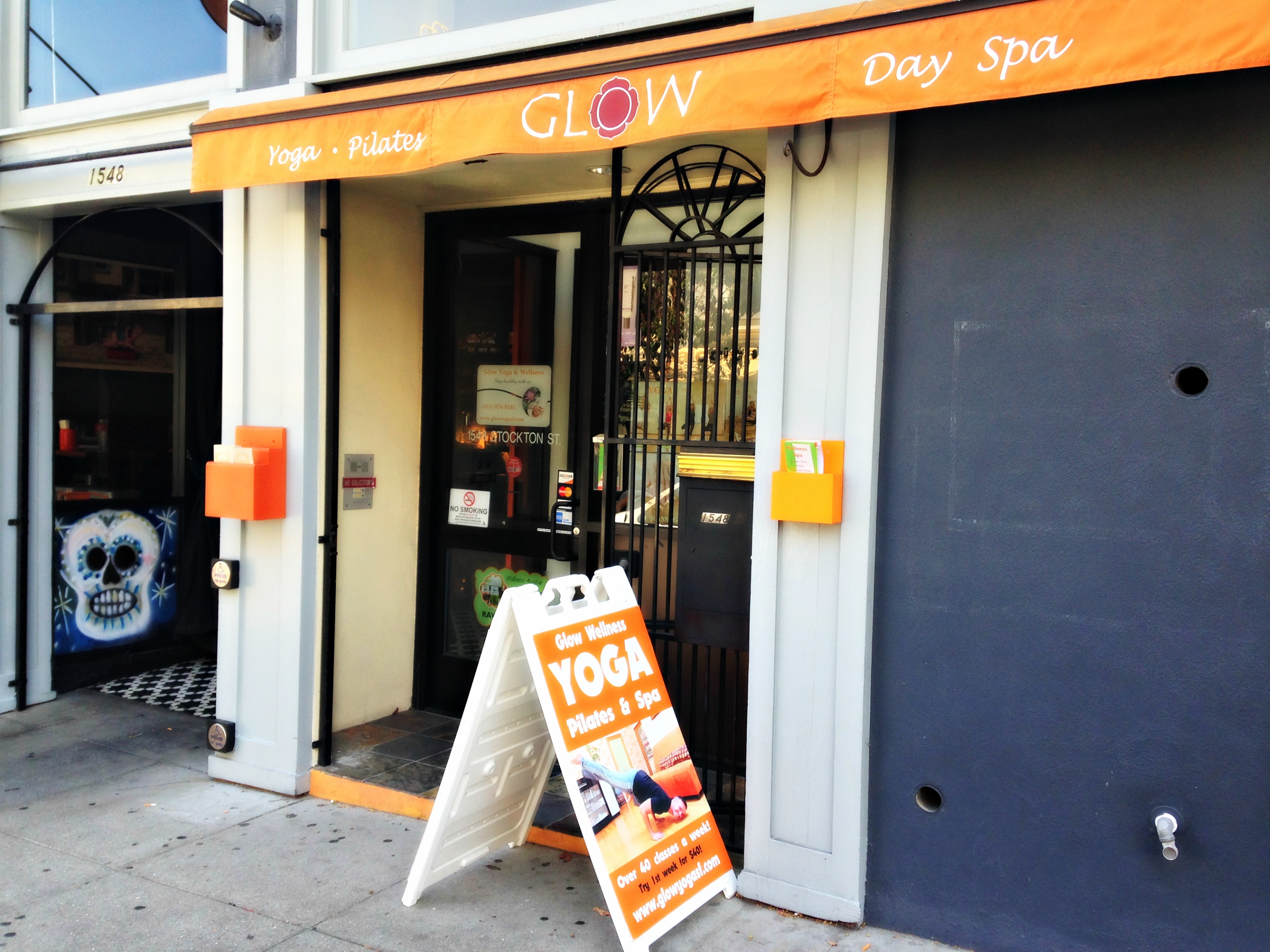 It was small, included a little lobby, studio, a spa room, a bathroom and some bright artwork on the wall. The ceiling had a sunlight in the lobby, so it seemed very cheery inside on a sunny day. 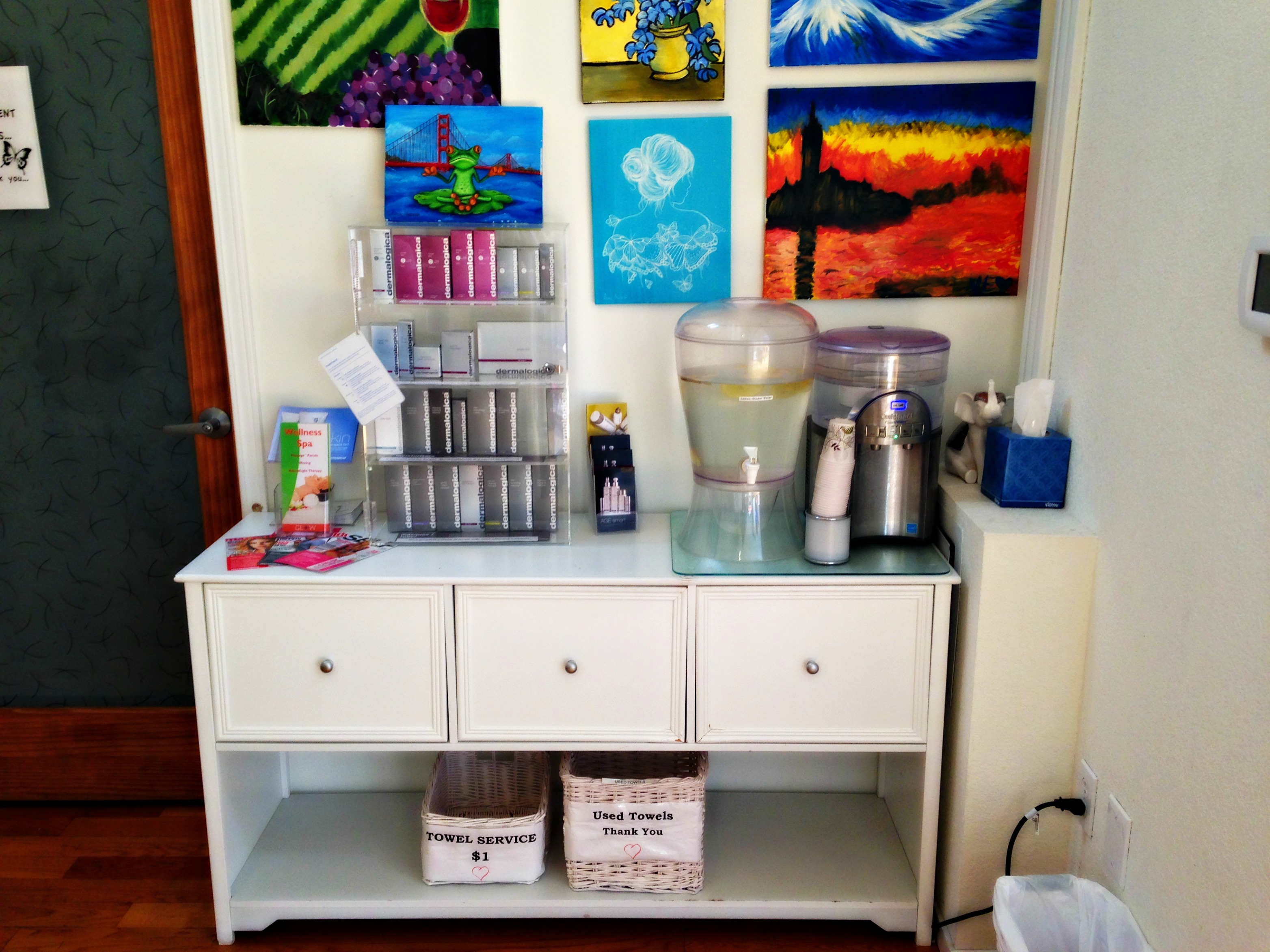 Glow gets major points for offering lemon-infused water to patrons, as well as some samples of things like whitening toothpaste. Major score. You can bet I took home one of those.

The inside of the studio maintained the cheery vibe. 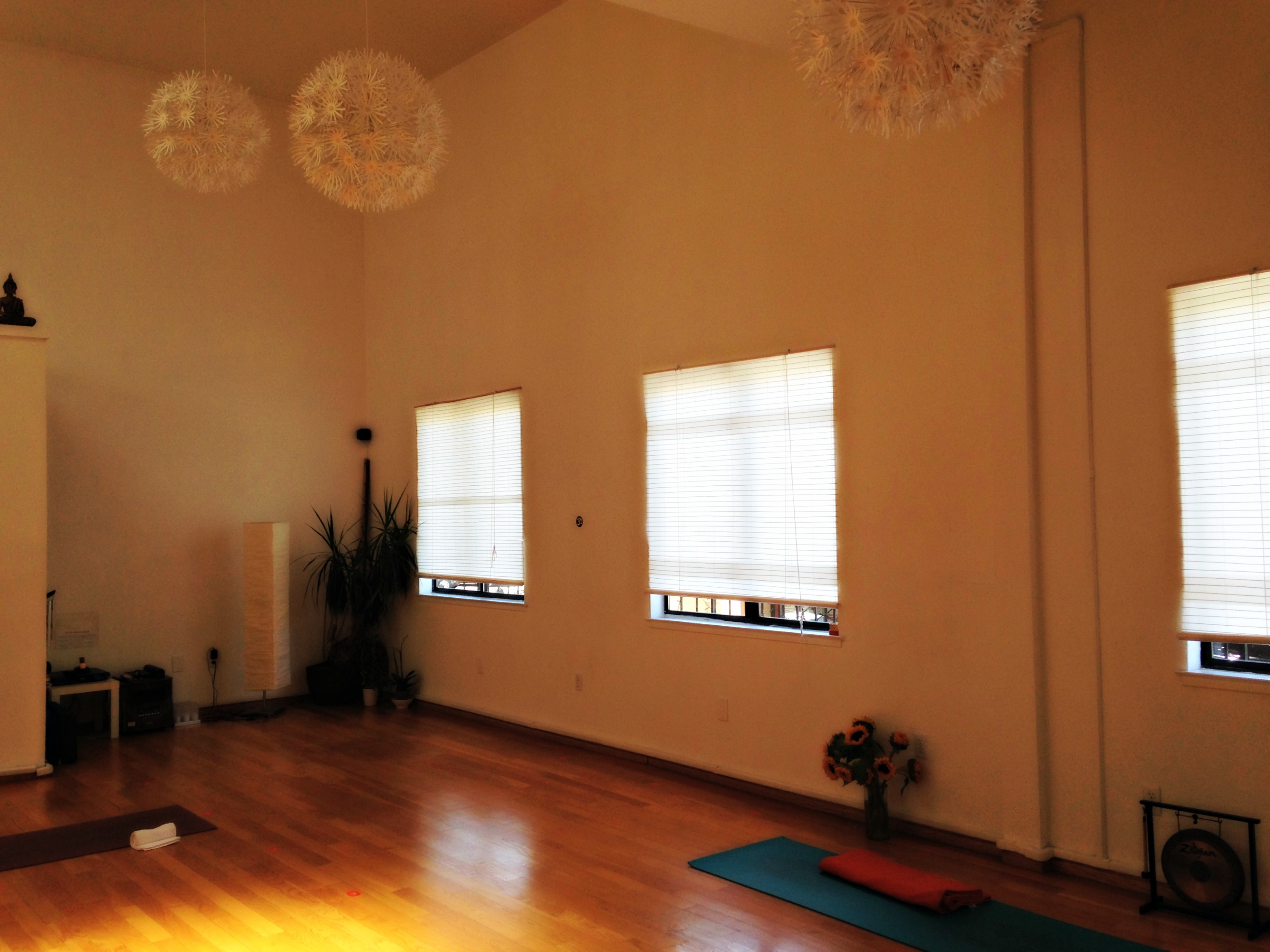 My favorite part about visiting Glow was that everyone taking class was told to find the mantra sticker that spoke to them on the floor in the studio and set their mat up in front of it. I chose this one … 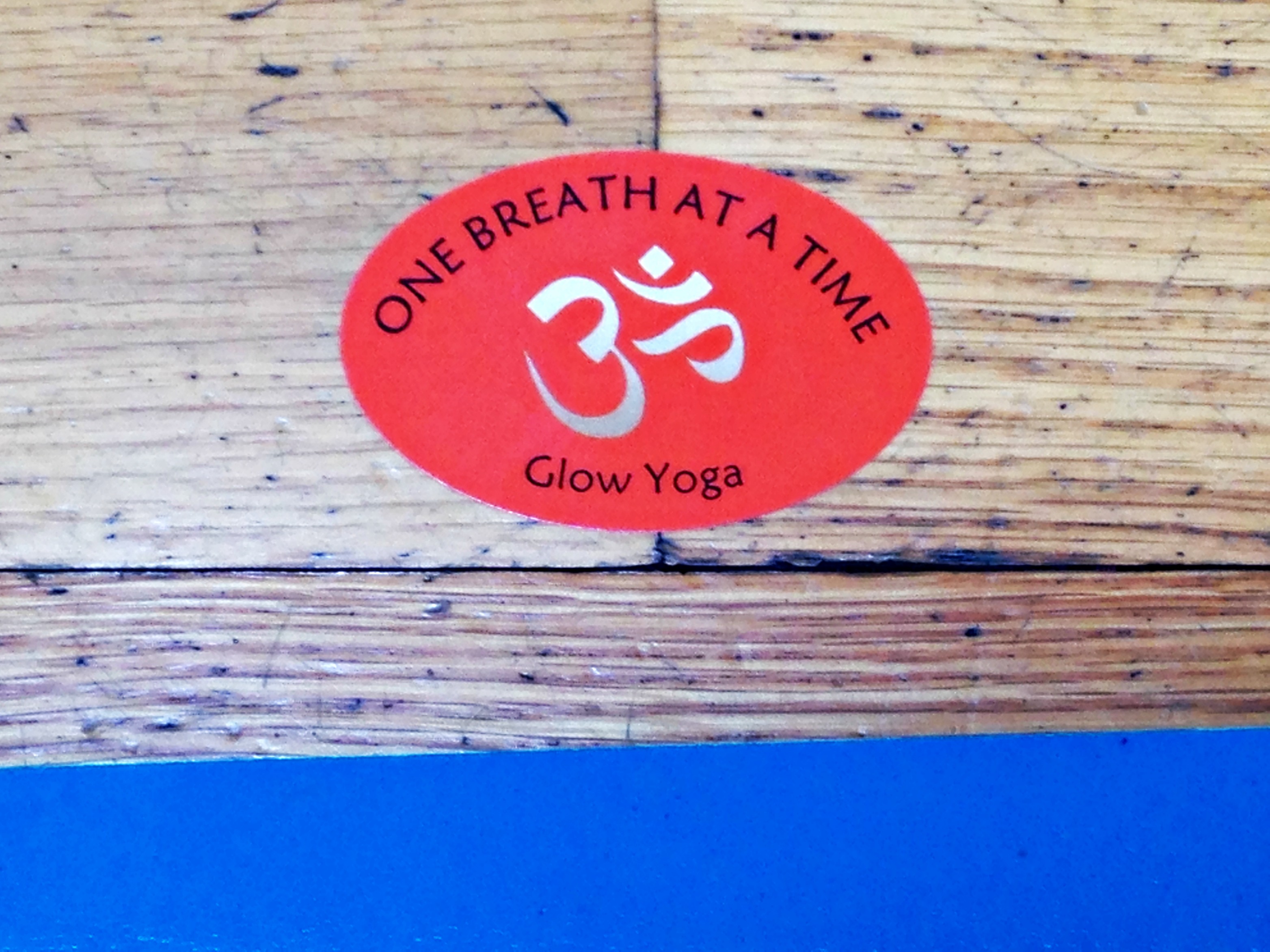 The class was one-hour in length and was set to the backdrop of upbeat music, even some old-school Madonna tunes, which I enjoyed.

Because the bright studio had a happy vibe, it definitely seemed less stuffy than your average yoga class. The instructor of the day was friendly, welcoming and had a great yoga-teacher voice. However, he did not do any physical adjustments to correct the form of participants (at least not any that I received nor saw), which is something I really appreciate, so that’s a con.

Overall, this was a strong yoga experience. It felt fun and more laid-back than other yoga classes I’ve taken. Not super hard, but hard enough. The instructor gave us time to move at our own pace through a ton of vinyasas and warrior poses, and he provided plenty of options throughout. The room was pretty hot, and I felt like I got a good stretch throughout my body, as well as raised my heart-rate with the difficult balance poses, shoulder stands and back-bends. I took the high options during the whole class and walked out with a light glistening of sweat, feeling like I had done some good for my sore muscles.

Yes, I left happy. Would I go again to Glow Yoga? Maybe so.

Power Yoga at The Pad in the Marina

On Monday, I visited another private studio and went to the noon “Power Yoga” class at The Pad in the Marina, which is just a few blocks from the Equinox where I work.

First and foremost, there were about 25 people in the class, and I was one-of-two not outfitted from head-to-toe in Lululemon. Oh, how I love the predictability of the clothing you’ll find on people in the Marina neighborhood. 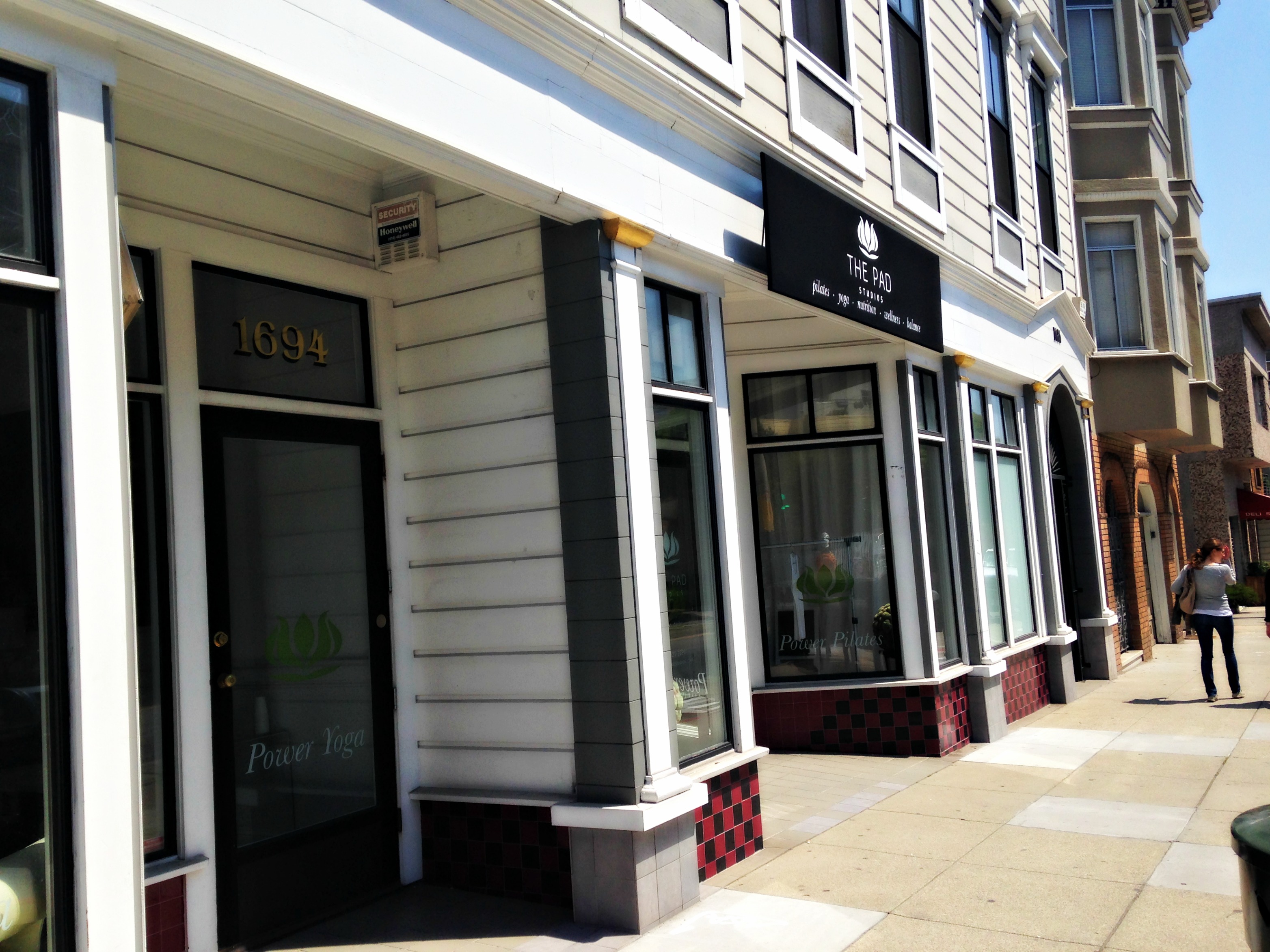 The Pad is definitely high-end. But it didn’t feel snobby at all.

The lobby was really cute, decorated with whites and greens, and there were several girls using their laptops on the pads (get it?), taking advantage of the WiFi before class started. 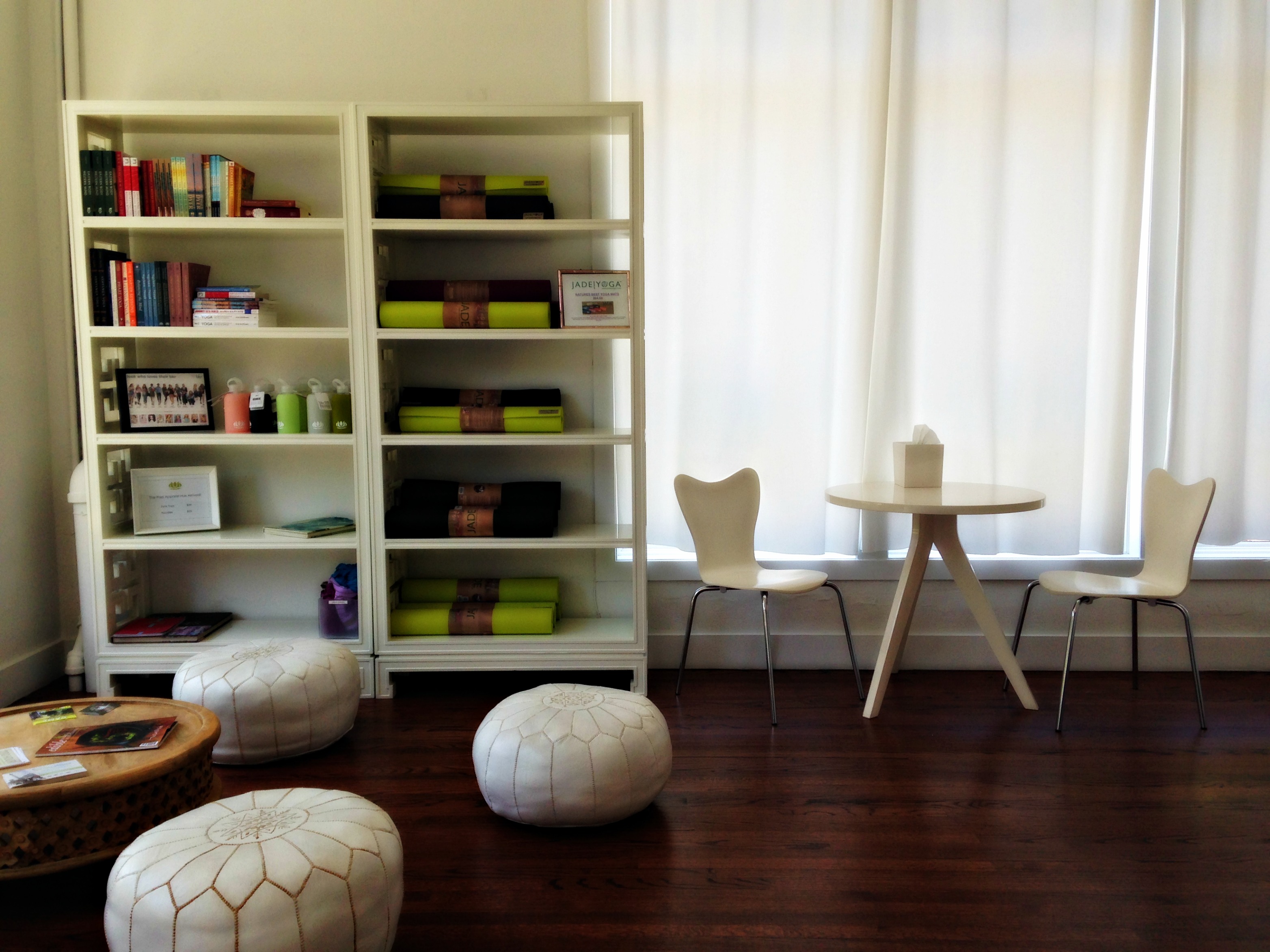 What I liked most about The Pad was the studio space itself, which was much larger than I expected. 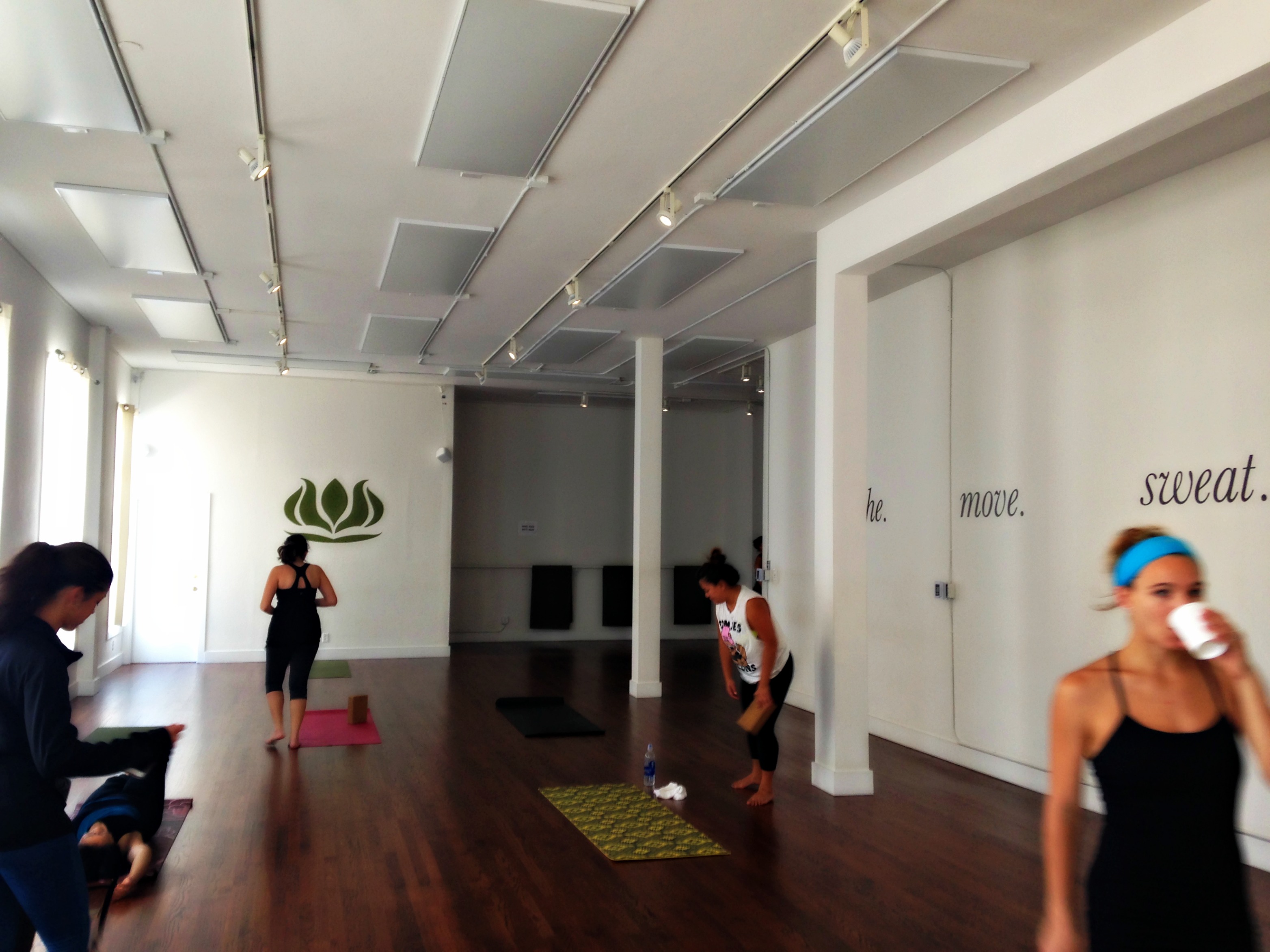 I love the simple words on the walls. 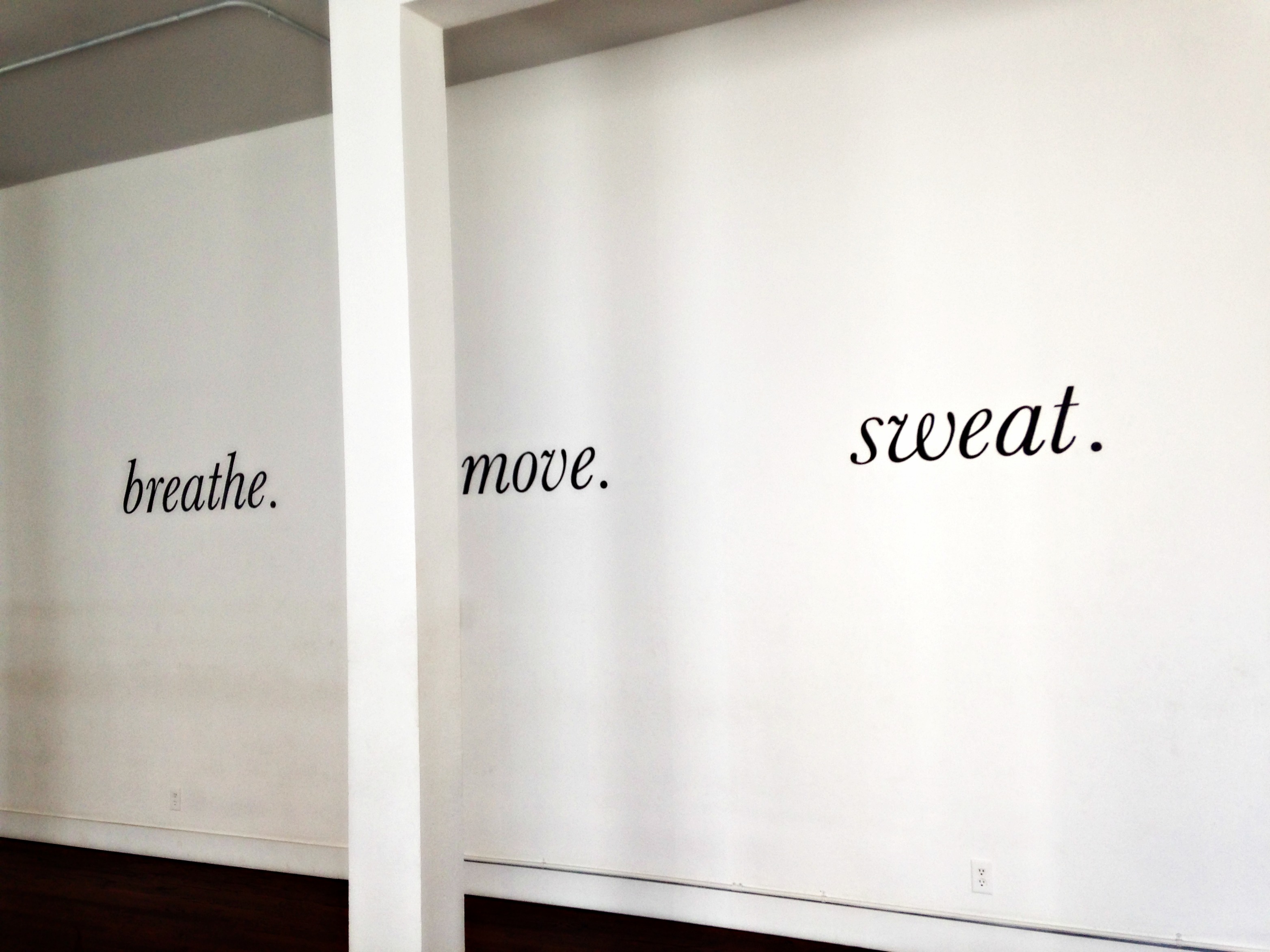 The class was not as difficult as many other power yoga classes I’ve taken. While we moved fairly quickly from pose-to-pose, none of the poses were super challenging, and I never felt very winded. I took the high option every time, except for the headstand, and I was super impressed to see about three girls in class dominate their headstands. Way to go!

What stood out to me is that there were about five minutes in the middle of class devoted specifically to ab work. Normally yoga classes will have some core moves at the end, so that seemed like strange placement. I would’ve enjoyed that portion, but because I rented a mat and only used one (normally I use two for extra padding), I felt like my back and knees were digging into the hard-wood floor.

The instructor was a young woman in a cool outfit, who walked around a lot and only demonstrated a pose once or twice. She continued to tell us to stay in the “here and now” rather than going over our to-do lists in our heads, which was a nice reminder. However, once again, like my experience at Glow, she didn’t seem to touch or correct people very much. Sometimes instructors are hesitant because they don’t want to offend people, but I’m all for the touching.

As far as the feel of the class, there was some light modern “Ellie Goulding” type music playing in the background, so it was informal. The room was a moderate temperature, and I didn’t sweat at all, which I normally do in a power yoga class. It didn’t feel very powerful, but I still felt good afterwards. I love the deep breathing, back-bends and chances to move differently than I do in my daily workouts and classes, so overall it was still a worthwhile visit.

The class went by quickly and ended with the standard meditation. I’m pretty sure I fell asleep, as I tend to do in yoga, which makes it a little hard to get up and head back out into the real world after class.

Would I go again to The Pad? Probably not, but based on its great location and studio space, I can see why it’s so popular.

And that’s my wrap-up of two private yoga studio experiences in San Francisco. These types of studios require booking in advance for classes, in which you can pay-per-class or purchase a package of classes at a reduced rate. Because I’ve always worked at a big gym with plenty of yoga options, I’ve never had a need for a private yoga studio and probably won’t start now. But I’m loving the opportunity to try out all these places with my ClassPass membership.

In case you missed it, I also tried my hand at a Pilates Reformer class at a small studio last week. I have seven chances left with ClassPass this month, so stay tuned to see what I sample next.

* Disclaimer: I attended the classes at Glow Yoga and The Pad for free, as part of my complimentary one-month membership to ClassPass. Learn more about the ClassPass program in San Francisco in my post about the service.

Do you have a favorite type of yoga? What are some of your wants from a yoga instructor? If you haven’t done yoga, what’s holding you back?