On this day, exactly two years ago, I walked down the aisle in front of 94 of my closest friends and family to marry Dave Pitt.

I didn’t have a blog back in those days, so I’ve never had a chance to share some of the wonderful moments from our wedding. But first, I’d like to give Dave a little tribute.

Dave’s name comes up on A Lady Goes West in about every-other post, because he’s such a huge part of my life. He’s involved in all my adventures in some way. Not to mention, we live in extremely close quarters. When you share a 550-square-foot city apartment with your husband, you’re always in the same room together. Even if we aren’t engaged in conversation, oftentimes we’re sitting right next to each other on the couch, unless we’re at work.

Dave is an incredibly special person. And I’m not just saying that because he’s mine. Anyone who knows him will say the same. I couldn’t imagine my life without him, and here are some reasons why I love him so much …

I could go on and on talking about Dave, but I’ll leave it at that.

Now let’s take a trip down memory lane to two years ago.

Our theme was dark, romantic and formal, which isn’t what you see a lot of these days in the world of shabby chic, understated cool. Don’t get me wrong, I love a pastel wedding, but for some reason, I always knew I wanted mine to be full of red roses and black tuxedos.

The following photographs were taken by Brian Pepper of Orlando Wedding Pix. He did an incredible job, and for anyone looking for a photographer in Florida, I suggest you check him out.

I got ready with my Mom and lovely bridesmaids in a Downtown Orlando hotel. We had the hair and make-up come to us, so we could enjoy each other’s company in one place. 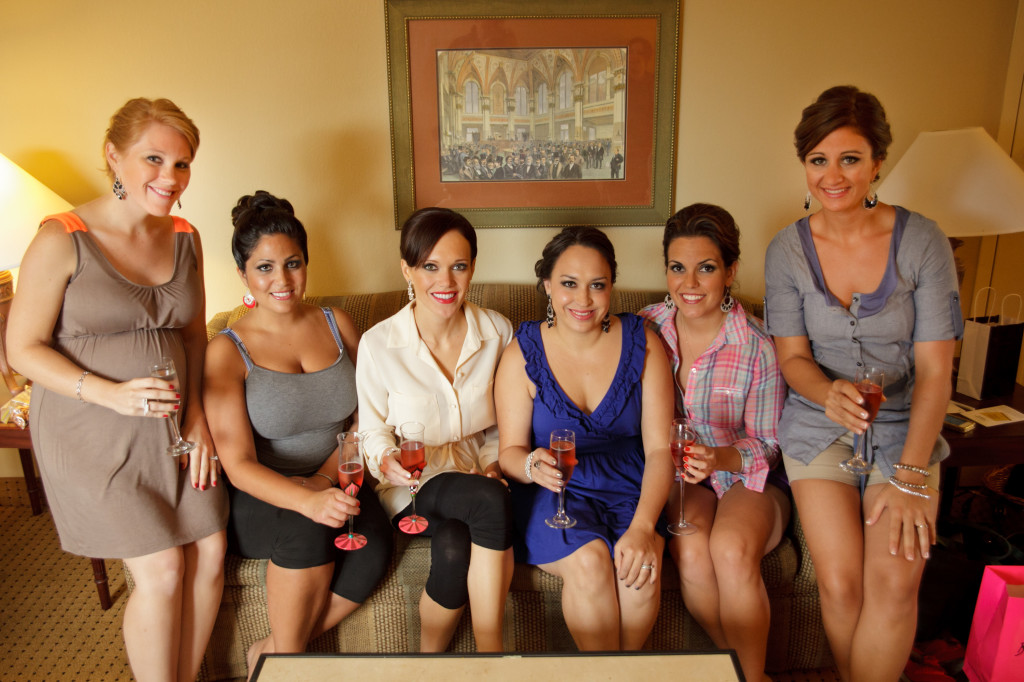 Then we walked over to the main event. Our ceremony was held in the Historic Courtroom at The Orange County Regional History Center. 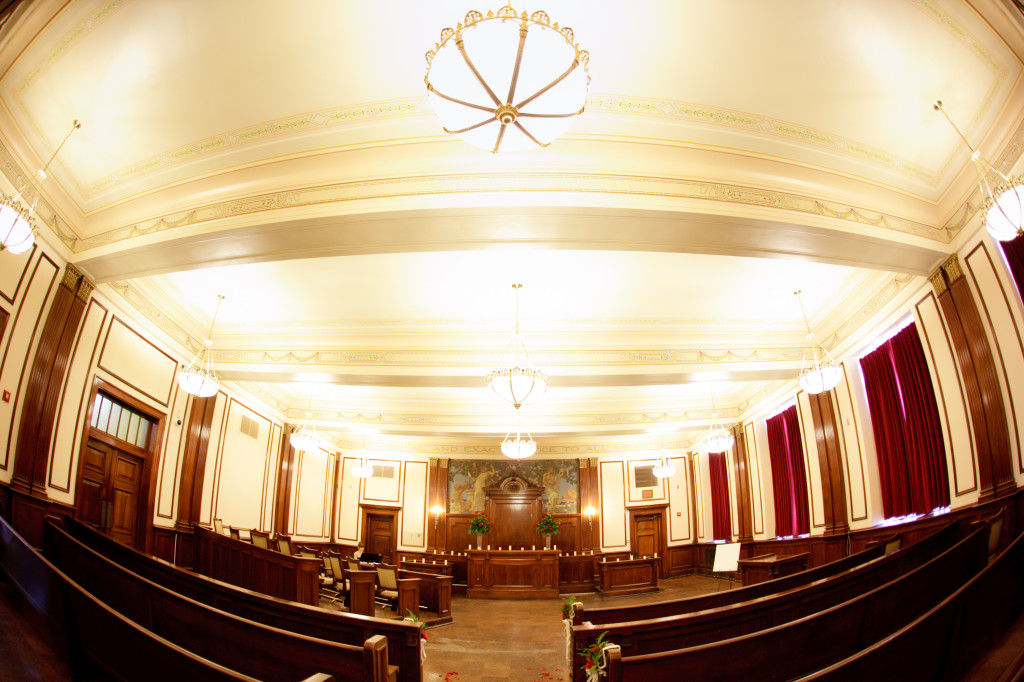 Dave’s dad was our officiate, and my Dad walked me down the red-rose petaled aisle. 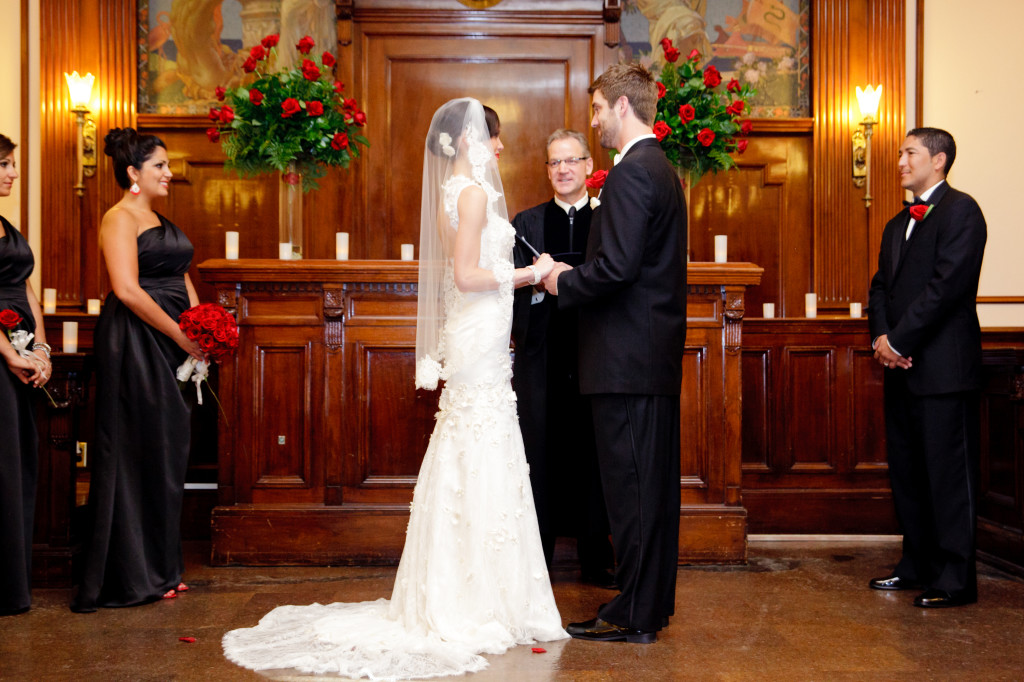 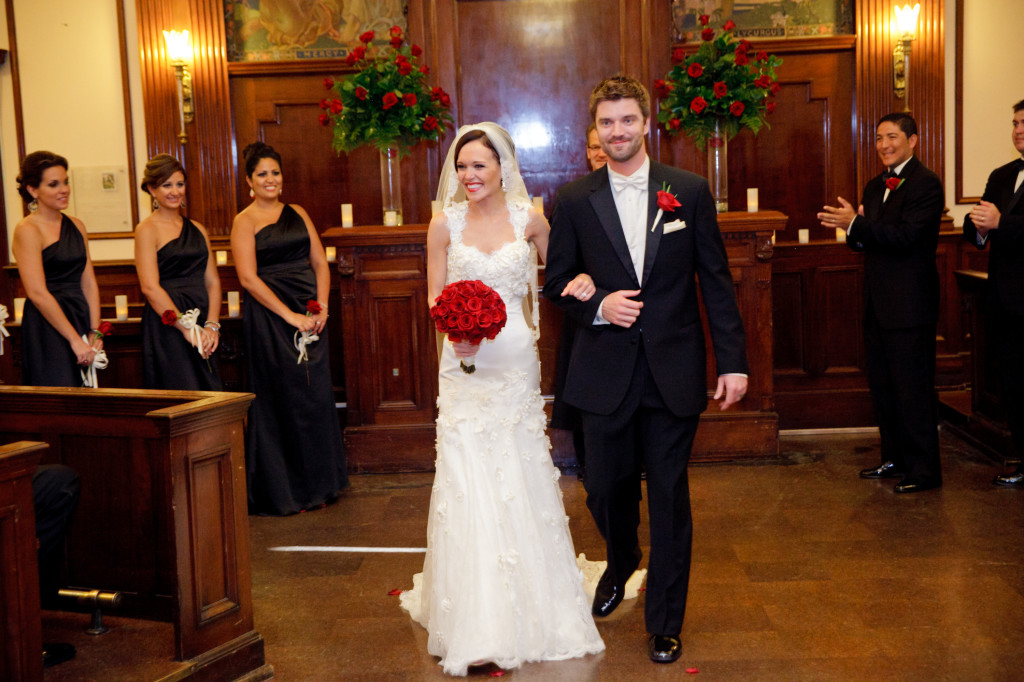 Here is our wedding party and our parents. 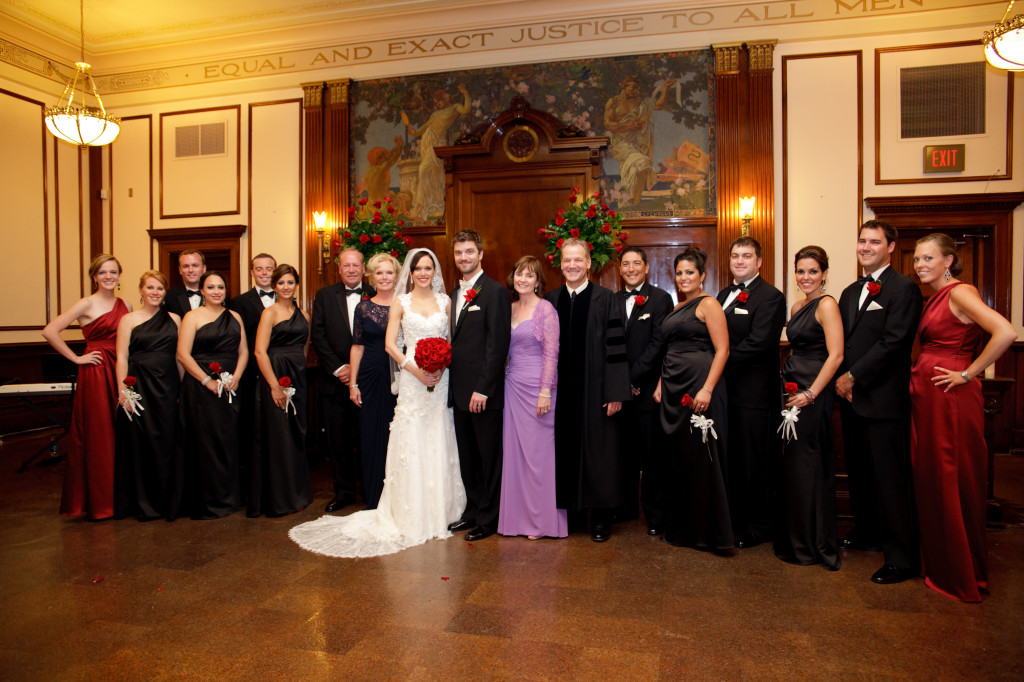 Here is Dave with his four sisters. 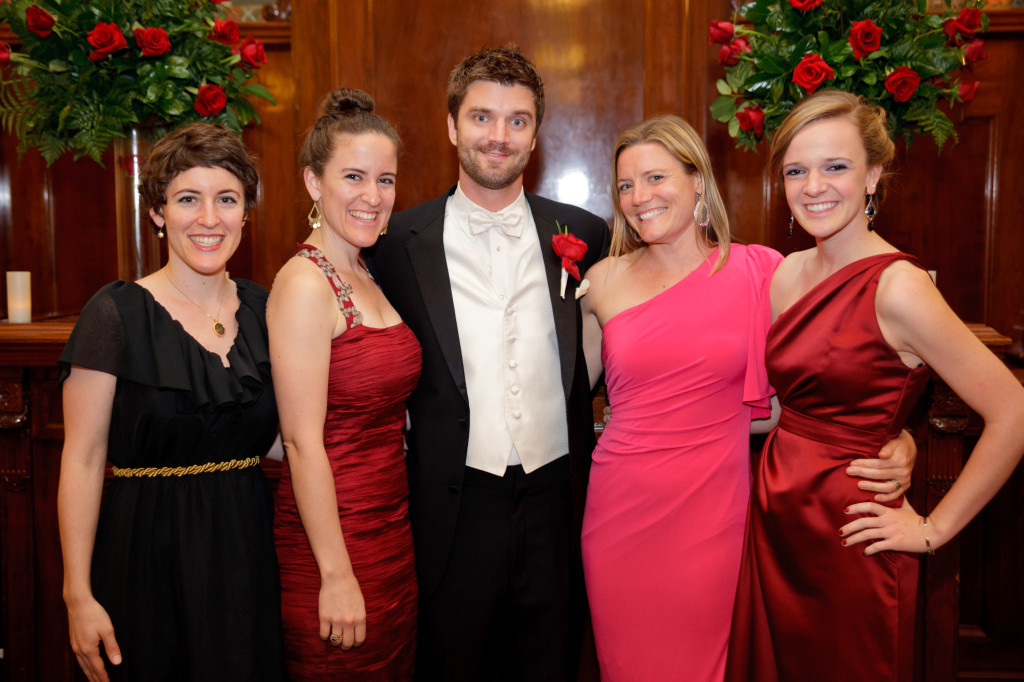 Here is Dave and me with my family, who helped out so much with the wedding. 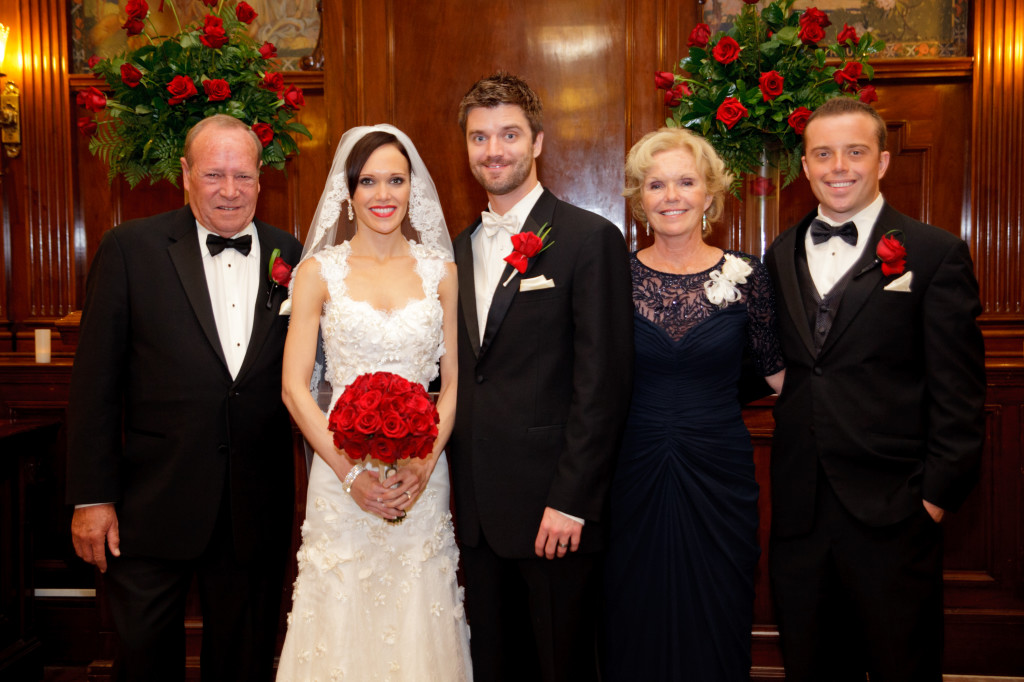 We each took separate wedding party photos before the ceremony, so that we didn’t have to spend too much time after the fact. The outside of the History Center offered a great backdrop.

Dave had five friends as his groomsmen, including my older brother. 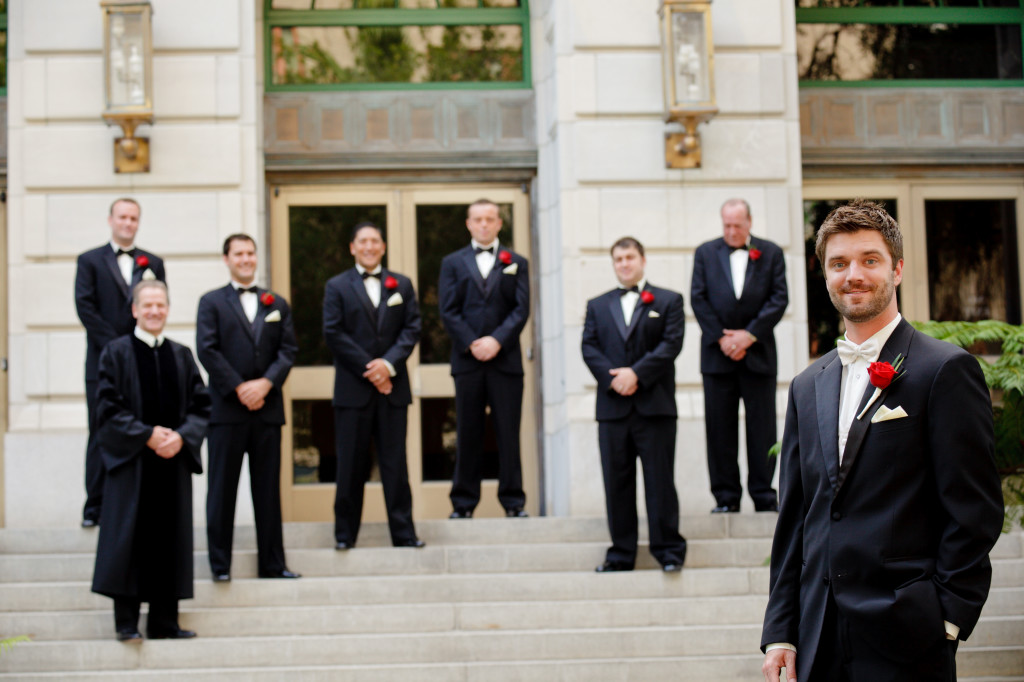 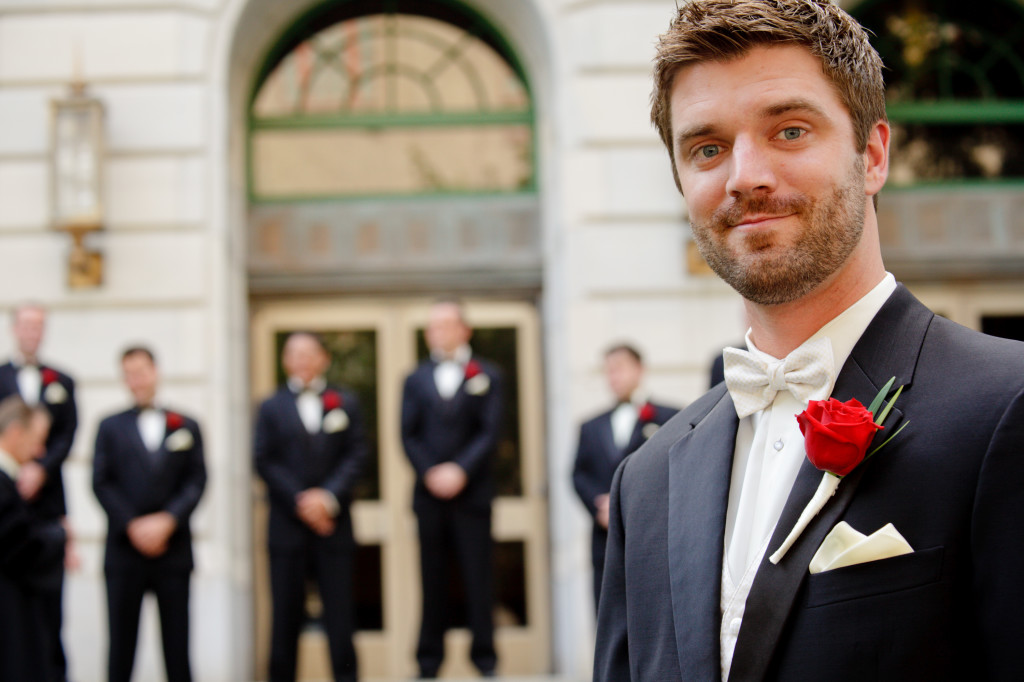 I had five girlfriends as my bridesmaids, as well as two esteemed usherettes, who included Dave’s little sister and his best college friend. 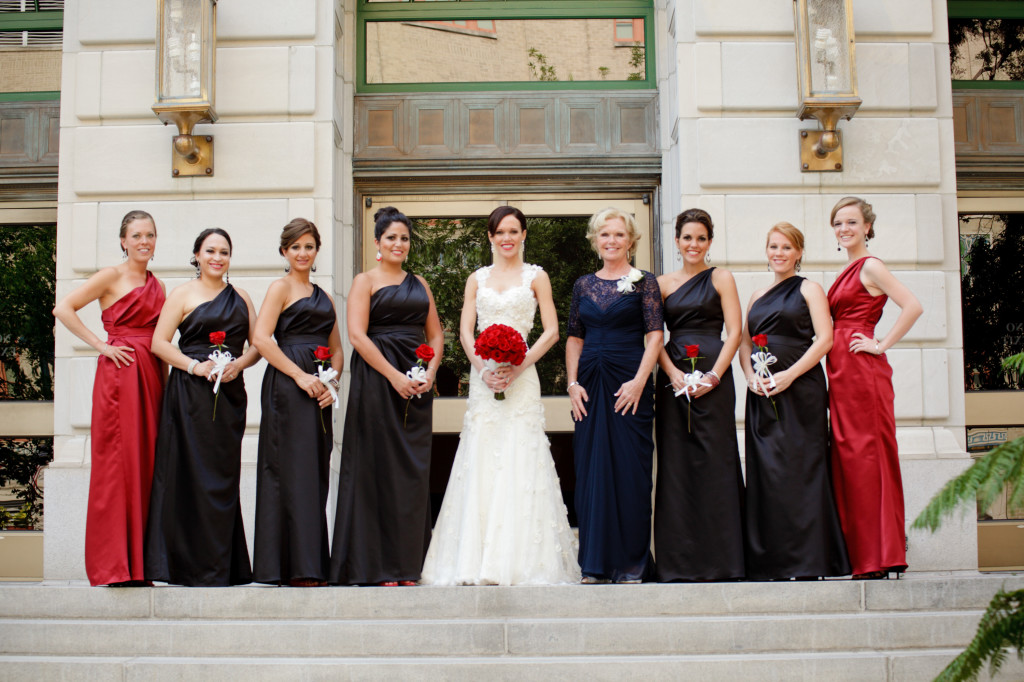 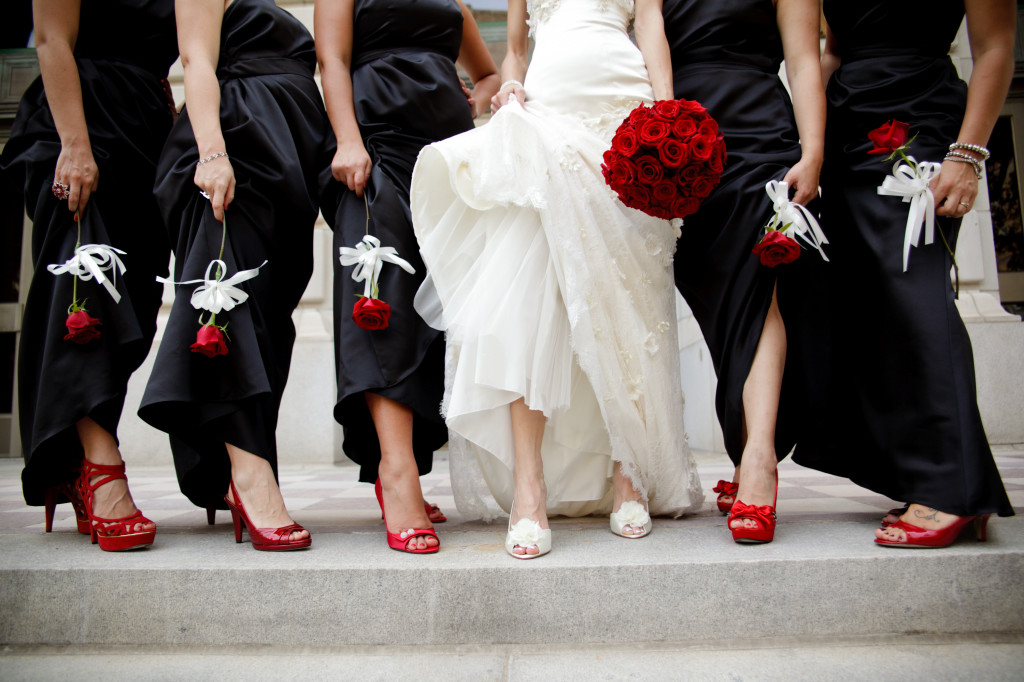 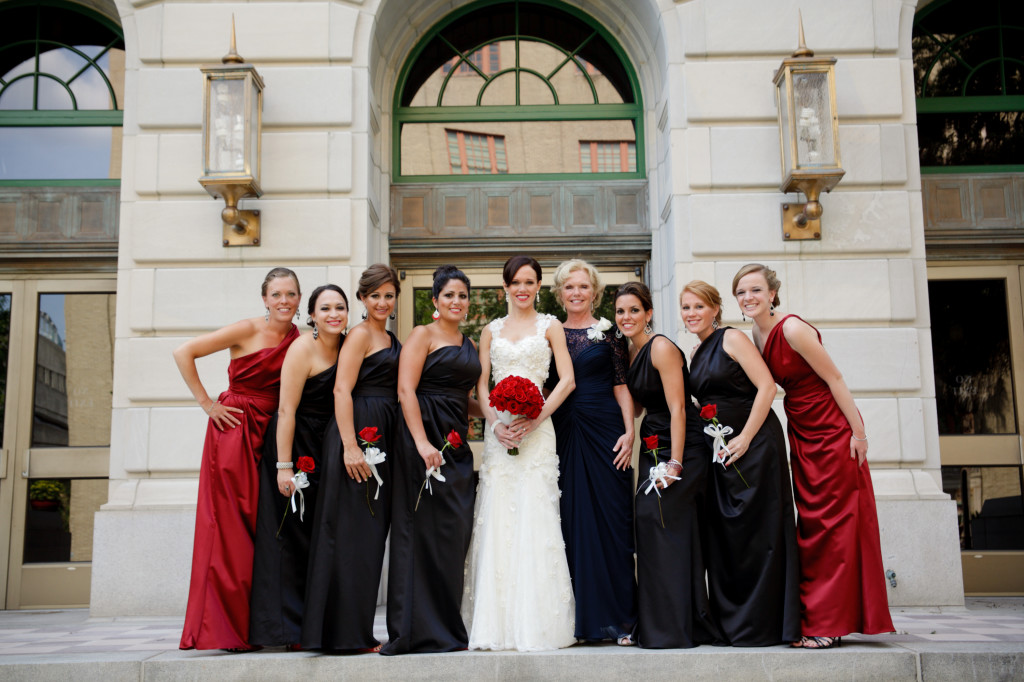 Here is my beautiful Mom and me. We couldn’t have had the wedding without her. She was instrumental, and she and her friends really tore up the dance-floor. 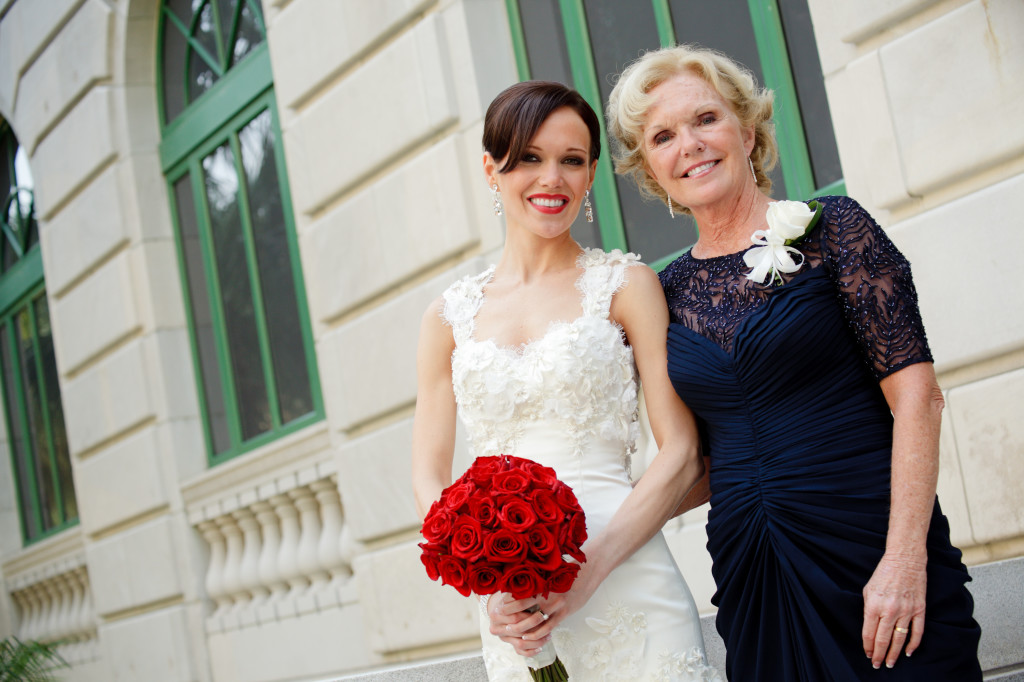 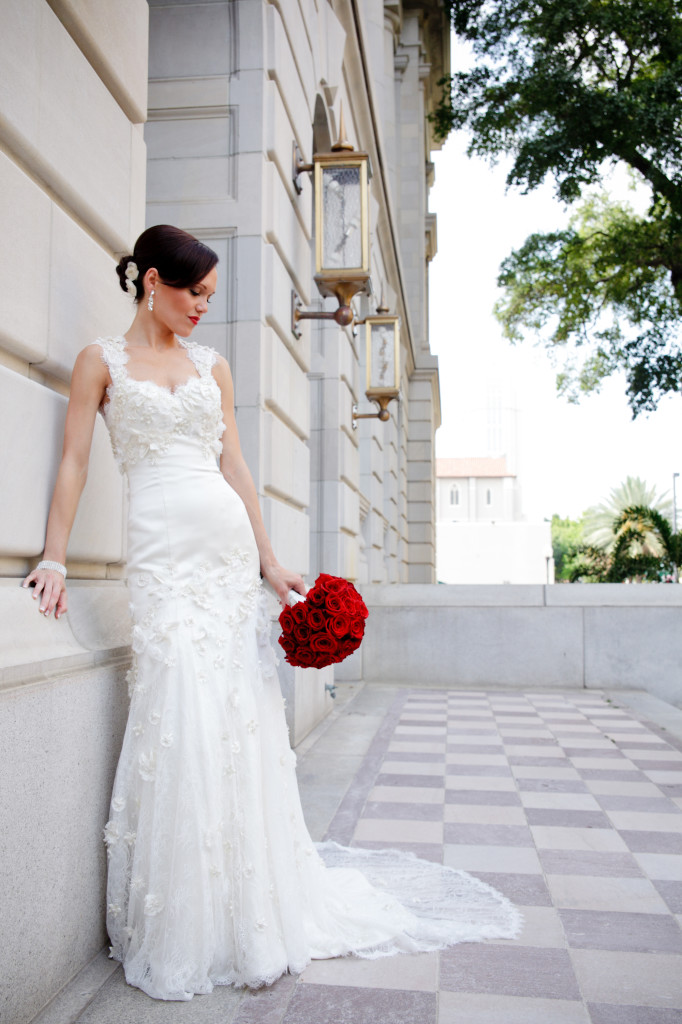 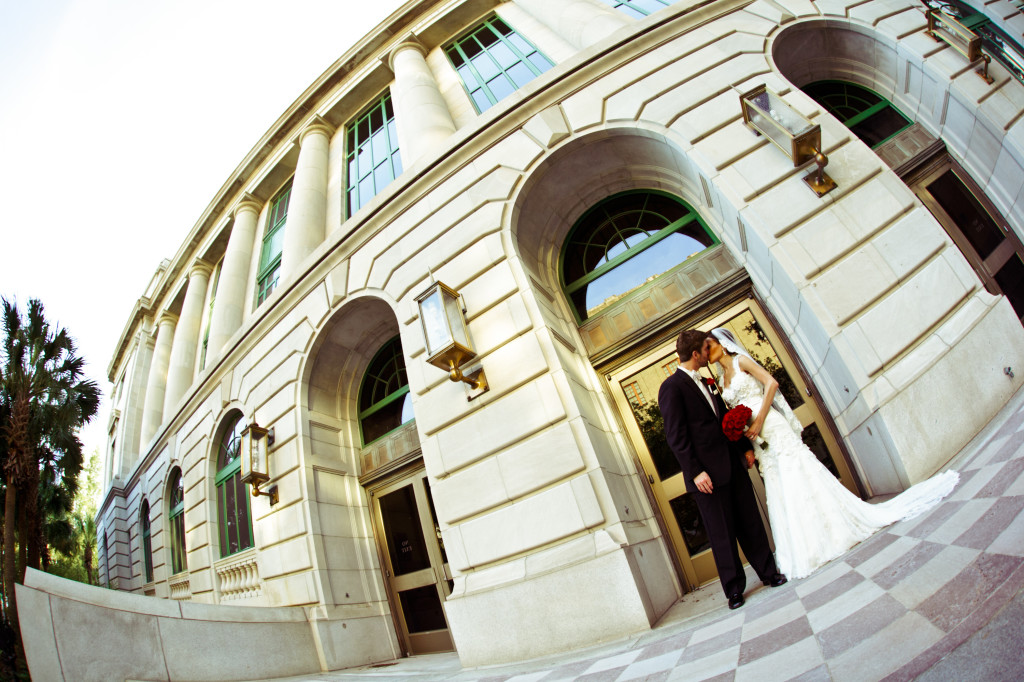 Dave and I knew we wanted to take a photo in the heart of Downtown, right in front of the place we met. This area, called Wall Street, was a scene we enjoyed on so many nights with our friends. 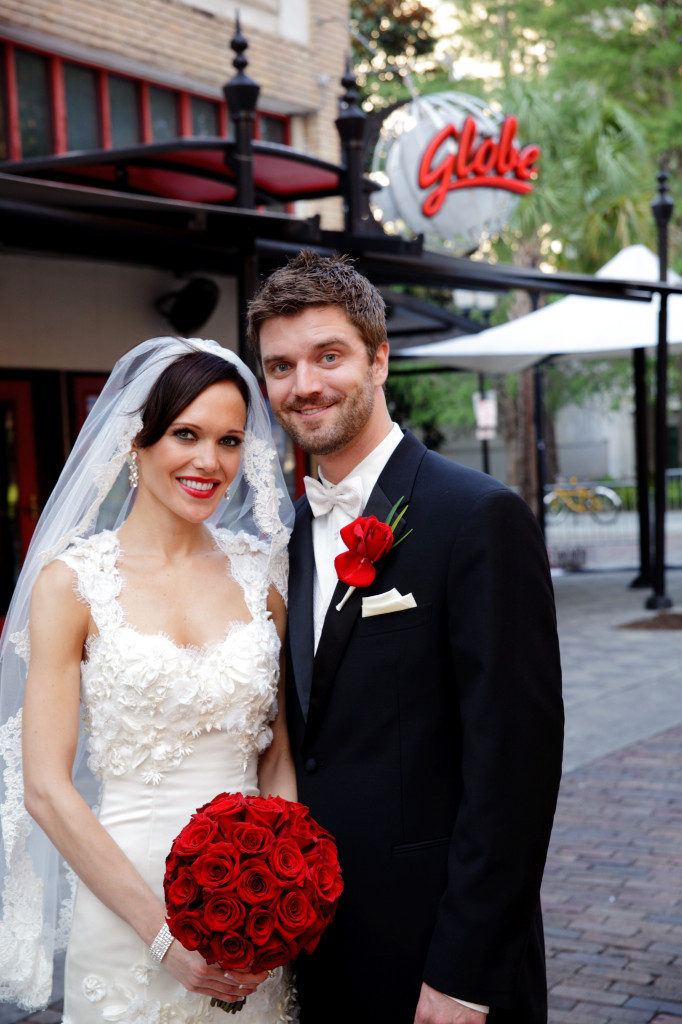 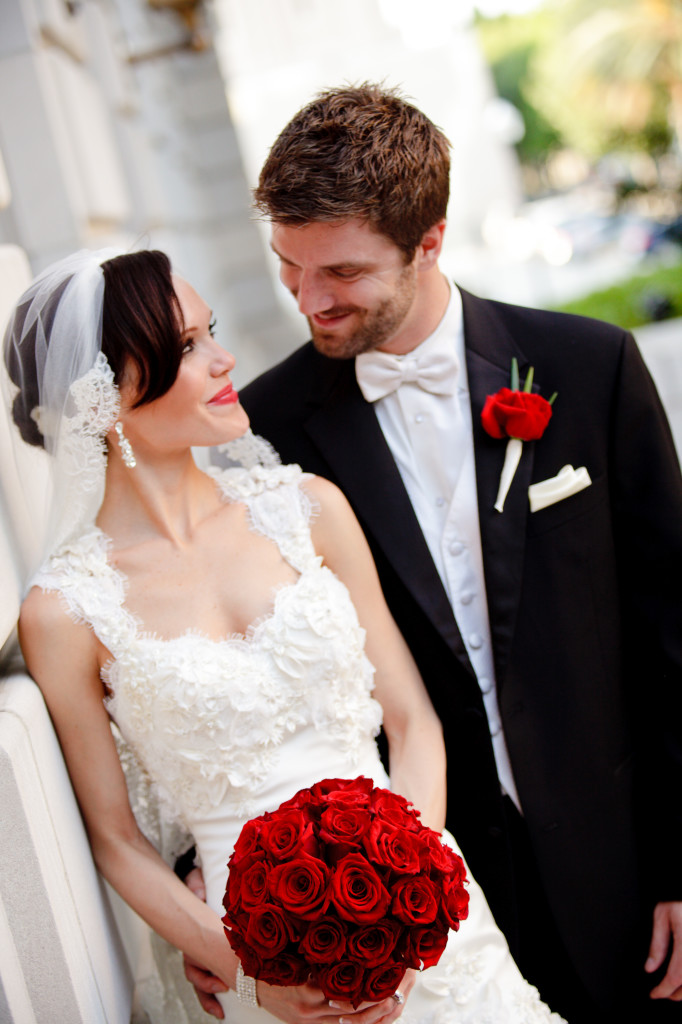 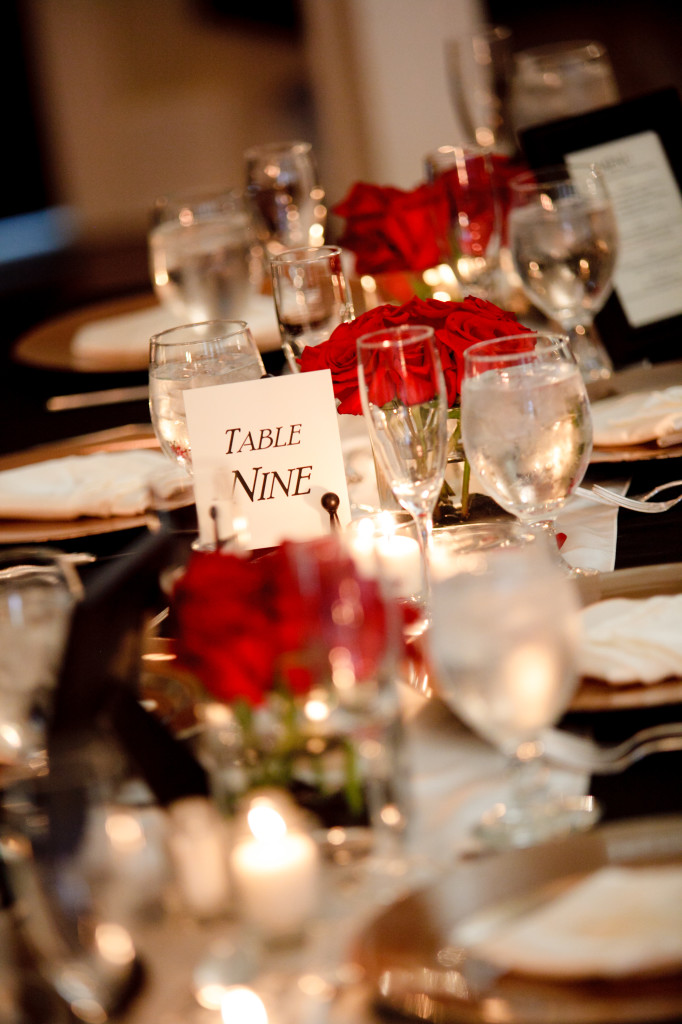 We had a traditional wedding cake, which featured red velvet and vanilla layers. 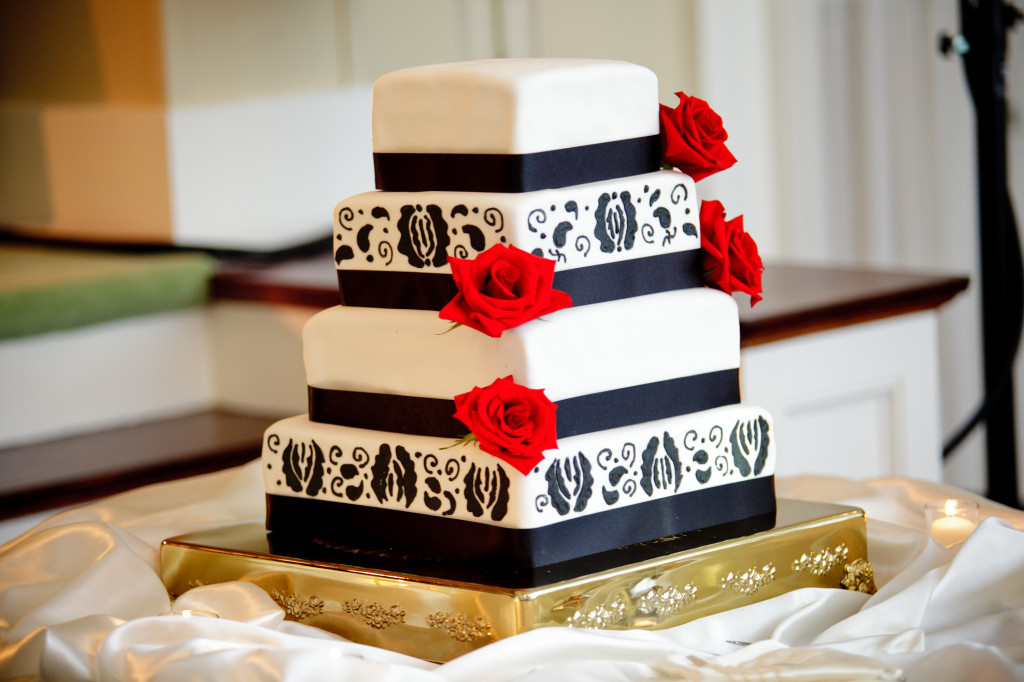 Our first dance was to Frank Valli’s “Can’t Take My Eyes Off of You.” 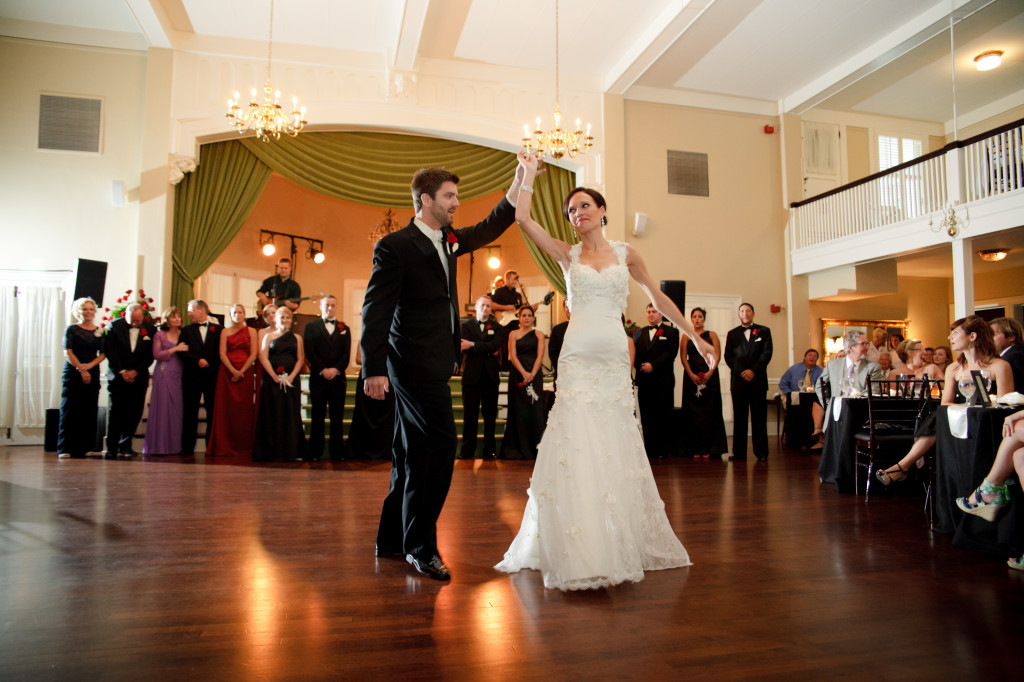 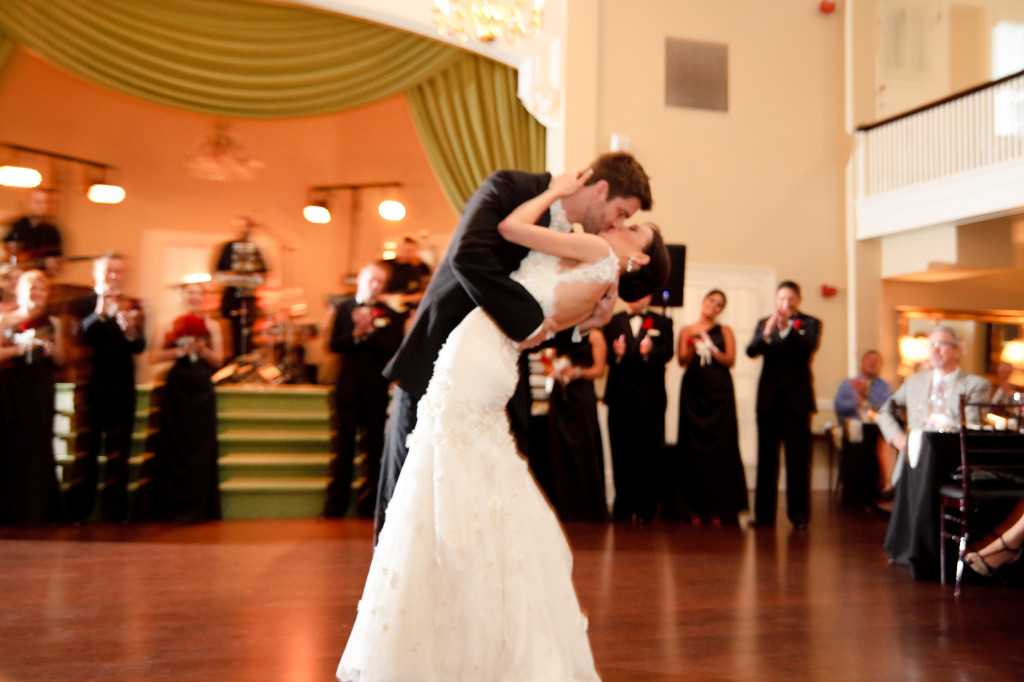 My Dad gave a wonderful welcome speech, which was followed up by Dave’s Dad giving a blessing. Then, our best friends, Yolanda and Grant, delivered two of the highest-quality matron-of-honor and best-man speeches I’ve ever heard. And I mean that. They’re both incredible public speakers and have known us both for a long time. 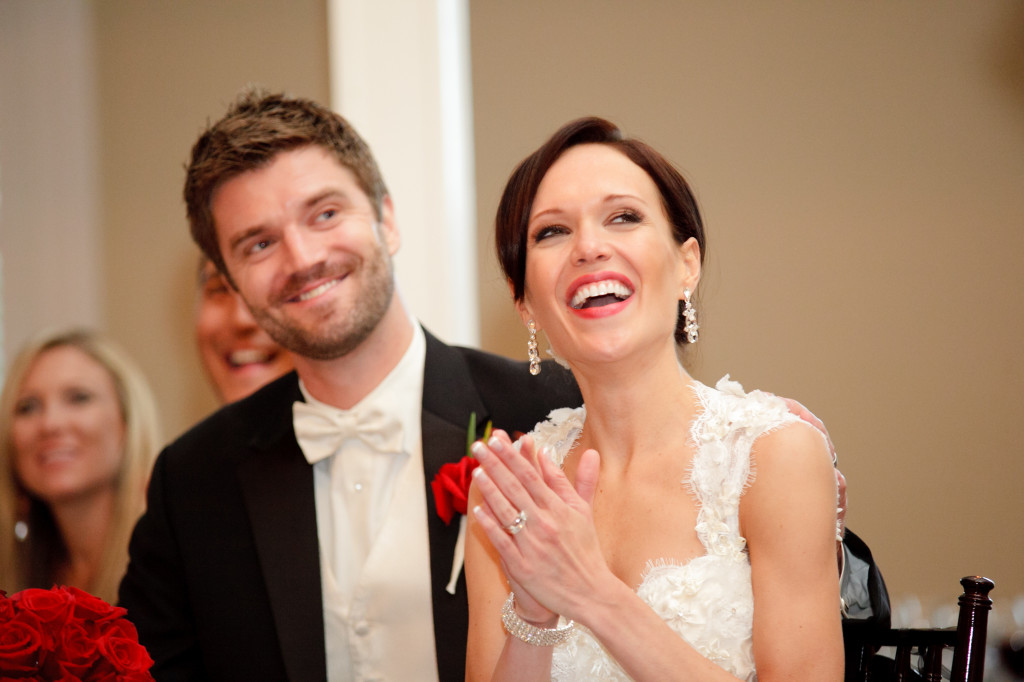 We danced with our parents. 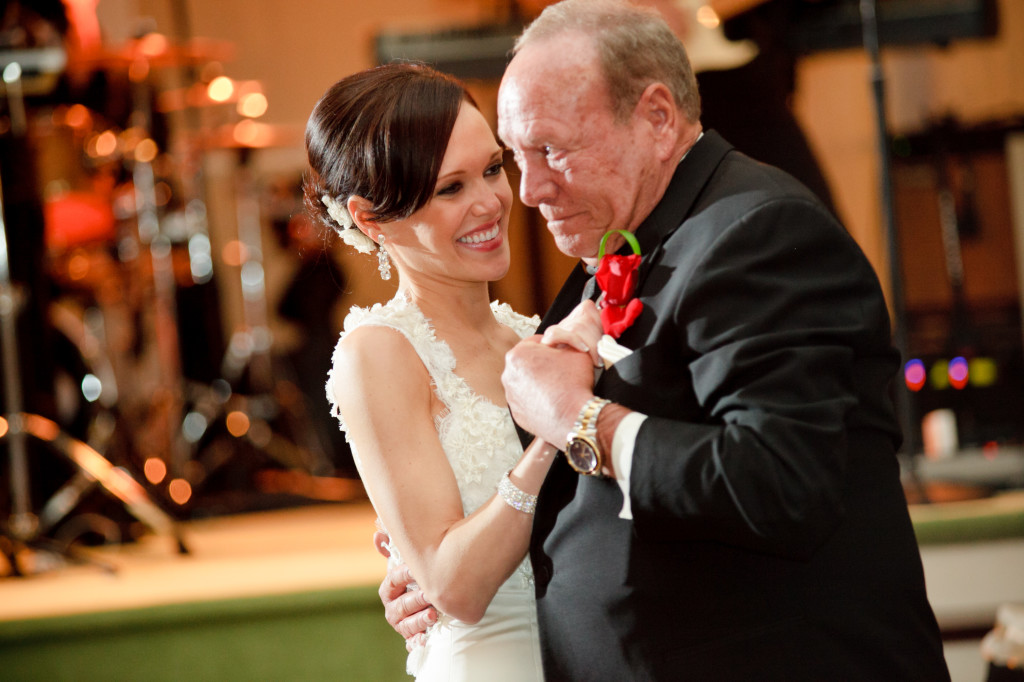 Then, when the sun went down, the party really got started.

Dave and I have always loved live music, so we selected The Leonard Brothers as our band, and they were absolutely awesome. People were dancing from the moment we finished dinner, all the way until the venue shut down. It was like a private concert, just for our family and friends. At one point, a few of us even got on the stage. 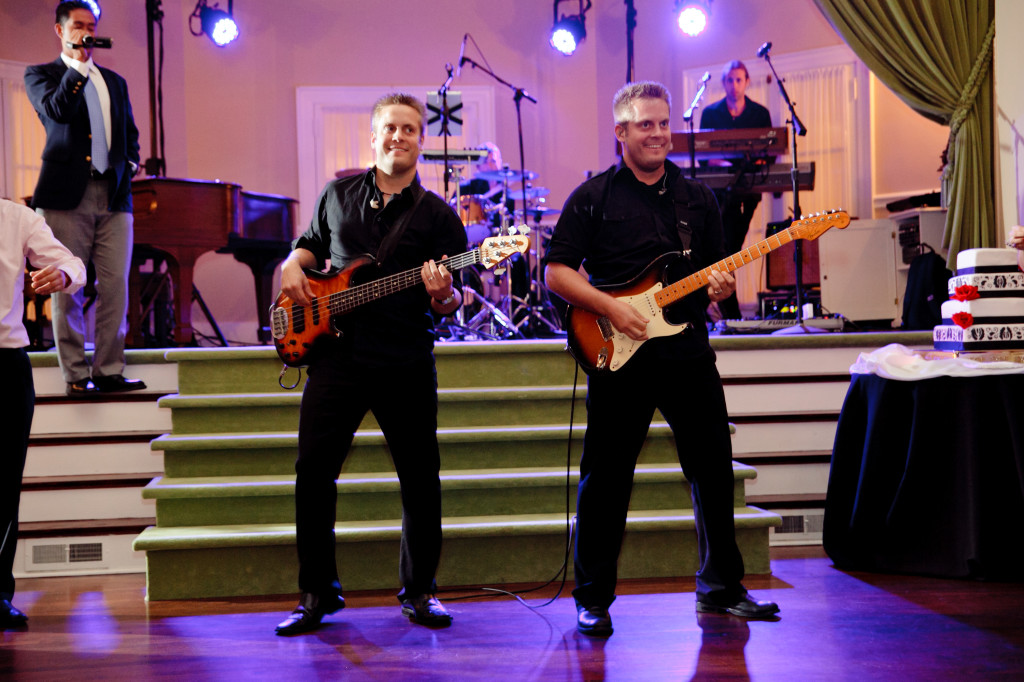 I love dancing at weddings, and dancing at my own just takes the cake. 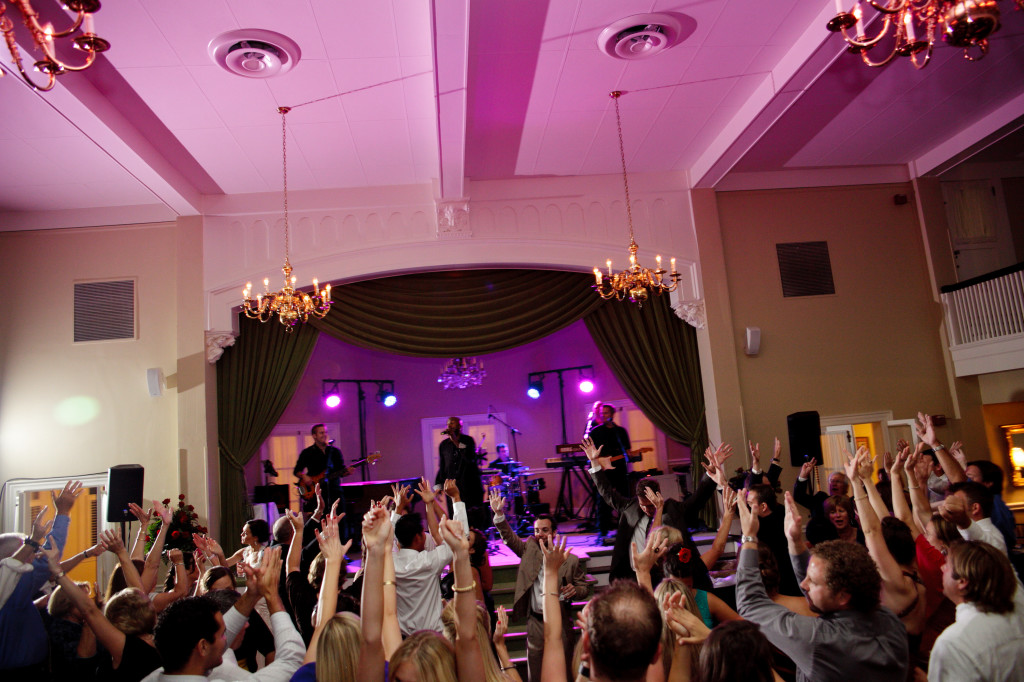 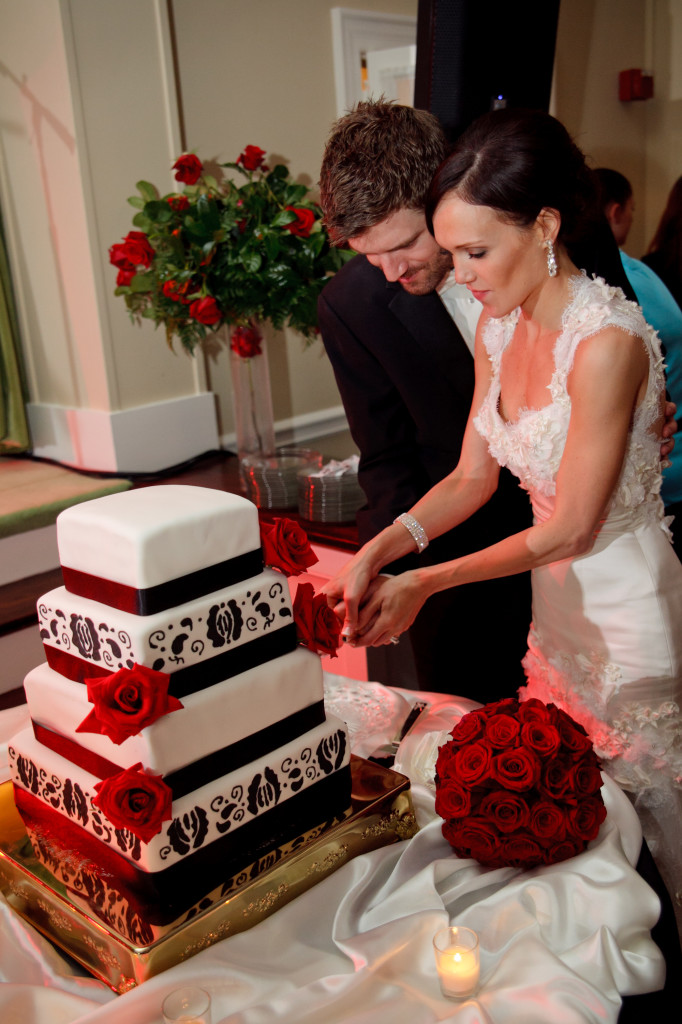 I’ll be forever thankful to both our band and photographer for organizing the following overhead shot of all of our guests, just before the reception ended. 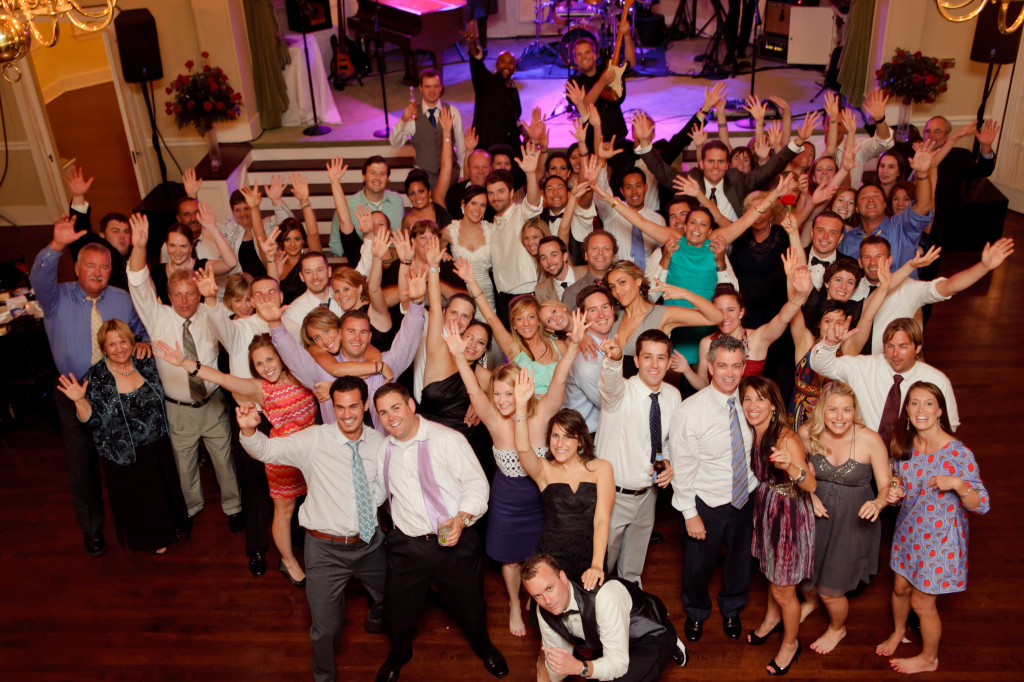 Finally, we had this memorable send-off with sparklers. (Although it wasn’t really a send-off, because more than half of the guests went with us to a local Orlando bar to finish off the celebrating.) 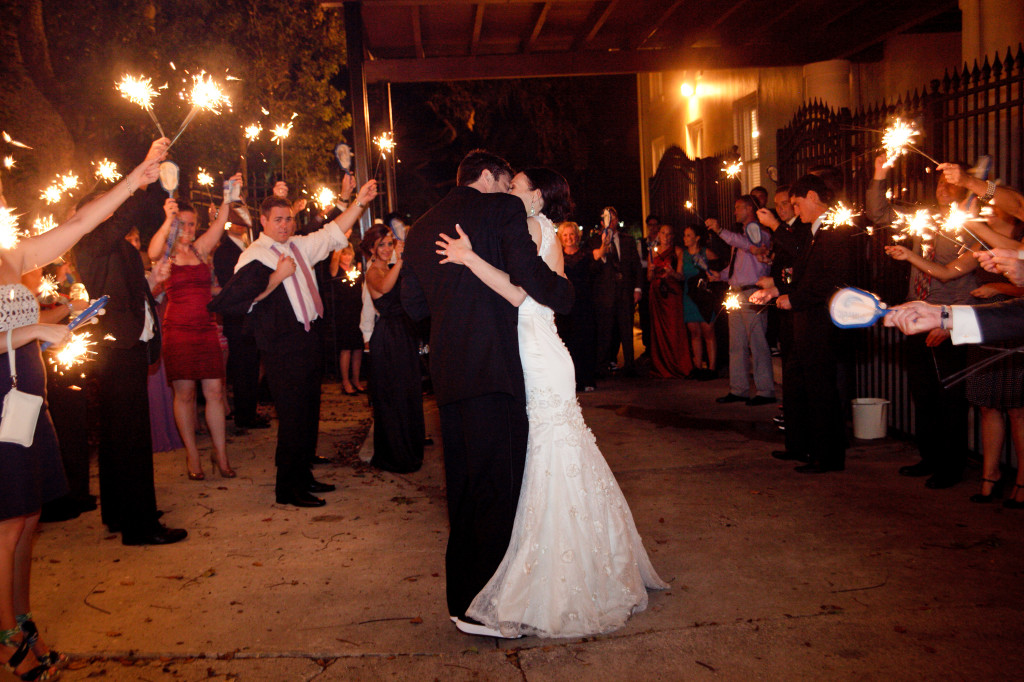 Our wedding was truly the happiest day of our lives. It seems like it was so long ago, yet at times, I can remember every little moment.

When planning our wedding, I felt like every decision was so hard. But looking back, it was all perfect. The only thing I would change now, is I would have paid for a video as well (you were right, Brian Pepper!). You should do whatever you can to document the day, because it goes by so quickly.

The best part about our wedding? It meant we became husband and wife. And we’re two years into this thing called married life, and so far, so good.

Finally, this year our anniversary falls on Memorial Day, so a big thank you to those who’ve served.

For those of you that are married, what’s your favorite wedding day memory?

If you’re not married, what’s your favorite part about going to weddings?