Such a great couple of days it has been! This weekend was chock full of fun activities, and I loved them all. There’s no better way to start a new week than to look back at the weekend, so let’s talk highlights …

On Friday evening, Dave and I had a double date with Nichole and her man, Brian. We met for a drink at 1515 in downtown Walnut Creek, then walked across the street for dinner at Opa. Dave and I had been to both places before, and they are solid spots. 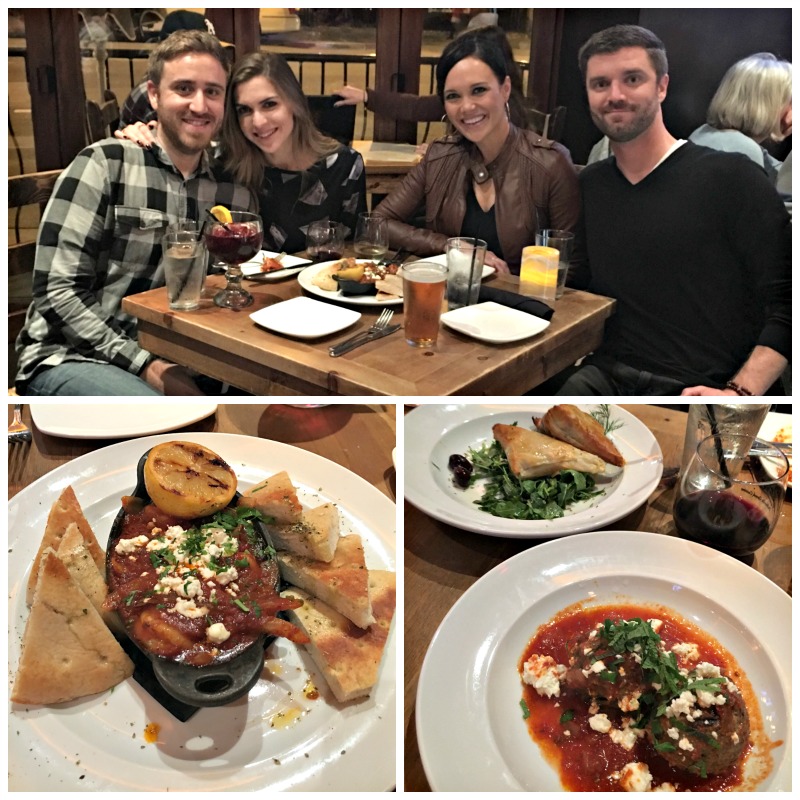 I like to think that Greek food is always a good choice, especially when spanakopita, wine and lots of bread are involved.

We ordered a bunch of appetizers to share for dinner, which were enjoyed alongside great conversation. Nichole and Brian “went west” just like Dave and I did, and it’s always good to connect with people who share your experiences. Plus, they’re practically our neighbors and live close to us.

Saturday was a big day in our household (yes, a little dog obsessed over here, so don’t be too “judgy”). It marked Rudy’s first birthday. Although Rudy the pup has only been with us for nine months, we knew his exact birthday from his puppy papers and were sure to celebrate it. Rudy received a little care package in the mail from my Mom, which contained some treats and a new toy, so his day started out on the right paw. (See what I did there?)

Knowing we wanted to do something special, Dave and I took Rudy on a nice long walk at Lafeyette Reservoir, which is a beautiful and popular public park in the East Bay for people to stroll and hang out. There were tons of other dogs and people walking and running, and Rudy did pretty well in the crowd, only getting nervous a couple of times. After finishing up the nearly three-mile loop on foot, we had lunch at Jamba Juice. 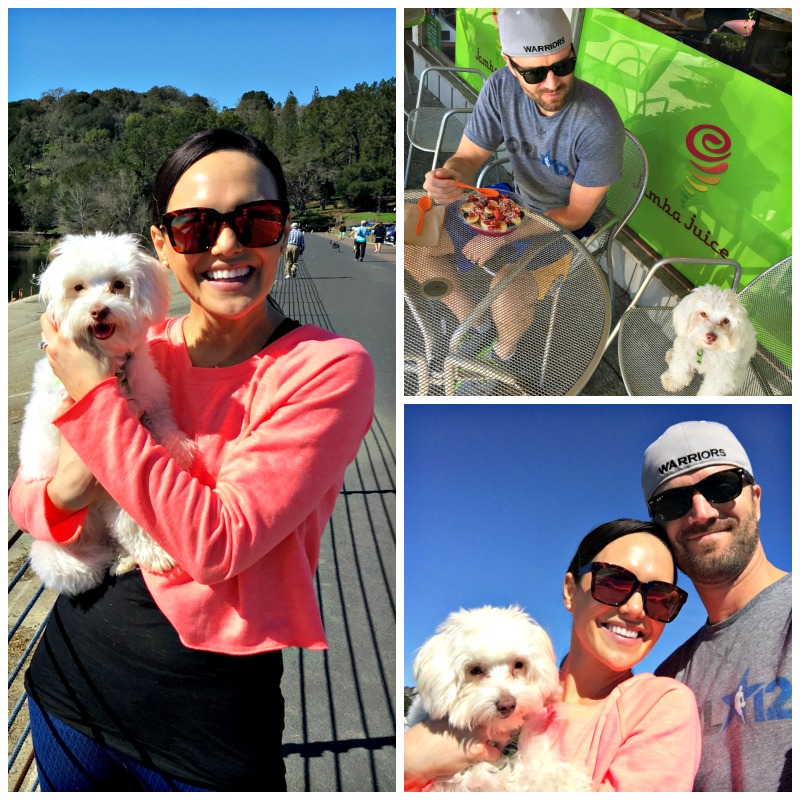 A bluebird day was the perfect setting to celebrate this little pup’s birthday in the East Bay. His tongue hung out nearly the entire time in excitement.

Saturday night was a super fun one. With plans to attend a concert in the City, Dave and I suited up and headed out on foot to hop on the BART (the subway system in the San Francisco Bay Area, for those of you not familiar). The night started off with some entertainment, as we were lucky enough to watch three super talented guys perform some contortion dances set to hip-hop music on our train ride into San Francisco. And yes, I dropped some cash in the tip bucket that they circulated to riders after they performed. Good times!

We got into the City a little after 7 p.m. and headed to the Lower Pacific Heights neighborhood for dinner at Academy Bar & Kitchen. We had never been there before and were pleasantly surprised. The menu was limited, but the food was very unique. We found a seat at a high-top communal table without a reservation and had to eat pretty quickly before marching over to the famed The Fillmore venue for the general admission show. 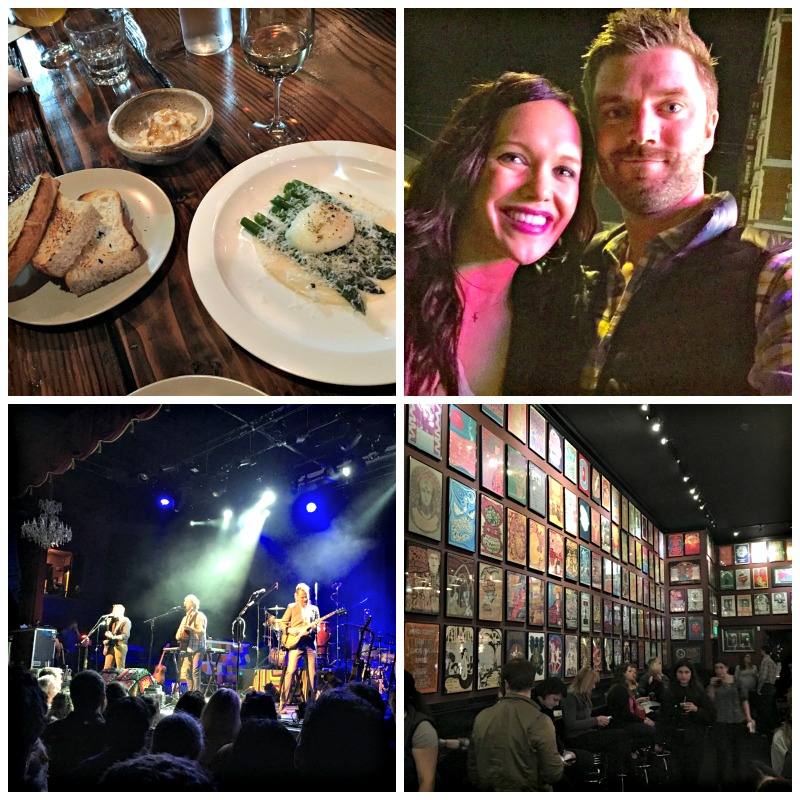 Live music is my favorite! It’s standing room only at The Fillmore, so you can get up nice and close to the stage, but would you believe there were people there with earplugs?

Dave and I went to The Fillmore last year as well to see the same band, Guster. In fact, this was our fourth Guster show together. I had never heard of Guster until Dave introduced me to the band when we first met many years ago in Orlando. They are much more popular on the East Coast, actually, and it doesn’t seem like many people here are fans until you go to a concert. We look forward to seeing them whenever they are in town, and that’s because not only do the Guster guys put on a good show, but they also offer some of the greatest in-between-song banter and chatter. They are hilarious, and of course, are awesome performers. We loved singing along and swaying to the music during the nearly three-hour show.

What else is great about going to a concert at The Fillmore? They give you fresh apples. They give you free water. And if you stay until the END of the concert, they give you a free concert poster. I mean, you’ve got to love the intricacies of original San Francisco spots. Right?

On Sunday, for Valentine’s Day, we rode our bikes to downtown Walnut Creek for an outdoor lunch at Tender Greens. Once lunch was done, we each picked up a mini cupcake at Kara’s Cupcakes before riding home. It was a gorgeous and sunny day, which let us know that the warmer weather has finally arrived back in Walnut Creek. 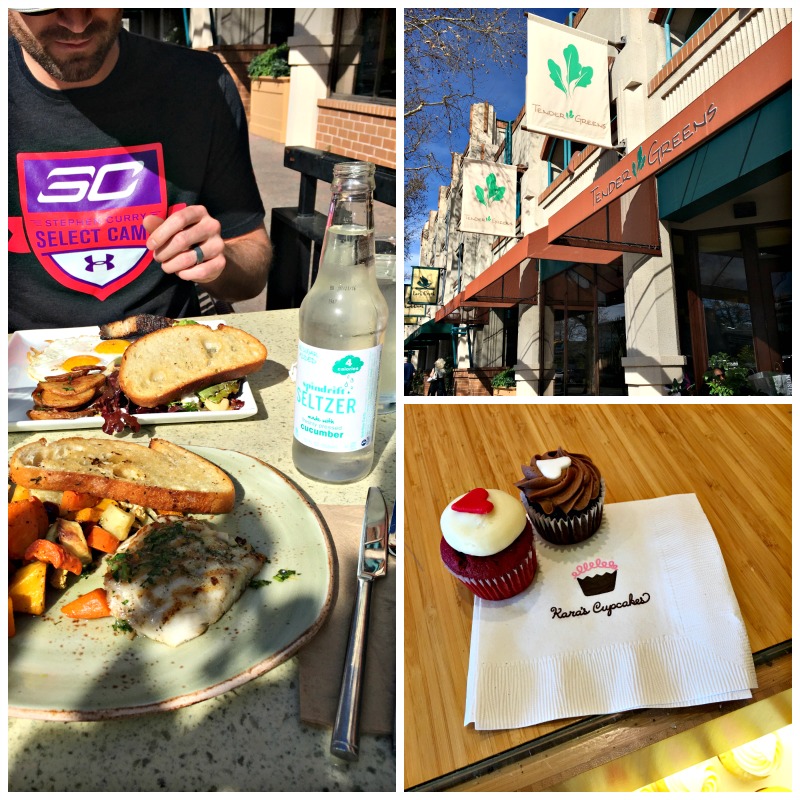 Seriously, Tender Greens has never let me down in the lunch department. With outdoor seating and healthy options to choose from, it’s the perfect day-time stop.

When we got back home, we did some relaxing and chores, and in the evening, Dave cooked us a fancy dinner in the comfort of our pajamas. In between all of that, I did laundry, major food prep for the week ahead, blog work and learned BODYATTACK choreography to teach tonight — so it was busy, but productive. I tell you what, with the Super Bowl last week, Valentine’s this week and a birthday party next week, it’s been easy to avoid the Sunday Blues, which I like.

I don’t know about you, but I’m feeling refreshed, full and happy after a weekend consisting of many of my favorite things: friends, food, live music, Dave and Rudy. Here’s to a great week to you all!

What’s the last concert you’ve been to?

How was your weekend and Valentine’s Day?