If you asked me what my favorite thing about Carmel-by-the-Sea is, I would probably say that it’s so darn quiet, yet it’s interesting. Even though the entire downtown area is one-square mile, and there are tons of boutiques, cafes, quaint hotels and people walking around on foot — it just seems like nobody is ever making any noise — but there’s plenty to do and see. Peaceful, but not boring.

This past three-day weekend, after I taught BODYPUMP early on Saturday, Dave, Rudy and I hopped in the car to make the just over two-hour drive to Carmel-by-the-Sea for our second visit to the seaside town. (We did hit a little bit of holiday traffic, which slowed us down, unfortunately, and thus we were super hungry by our lunch-time arrival.) About two years ago, we went through the area for one night (before we had Rudy), but felt like we saw so much more and really soaked up the scene during this trip. And this time, we just happened to be visiting during the town’s 100th anniversary in 2016, which is pretty cool. 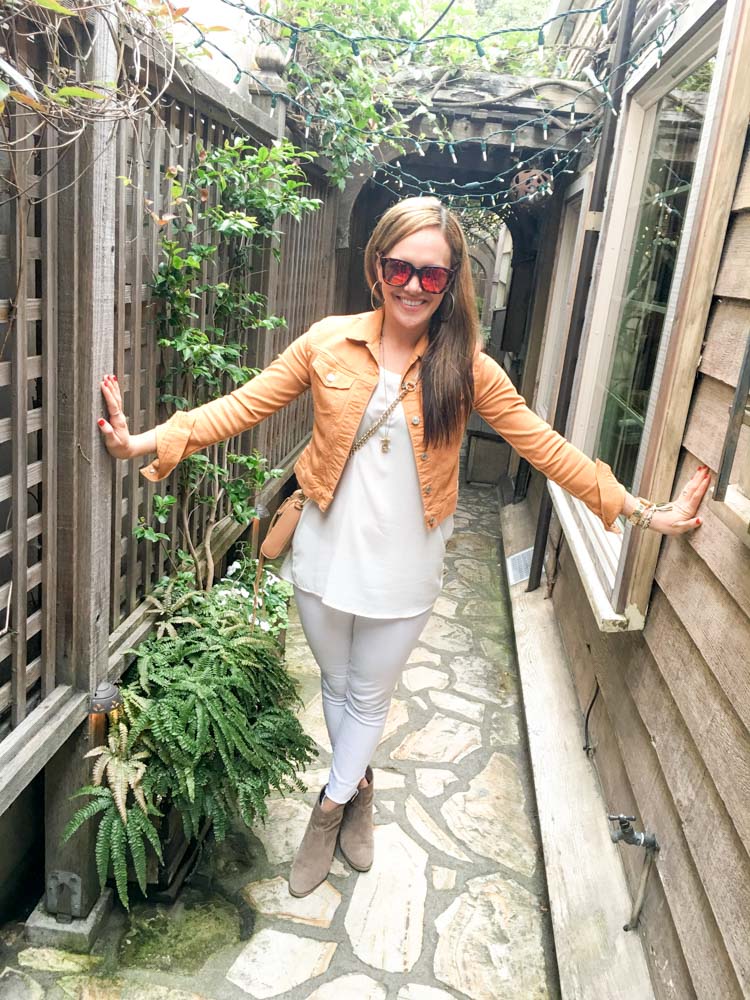 Even though we were only gone for two nights, this getaway seemed like a long one, and we loved the fact that nearly everywhere in Carmel is incredibly dog-friendly, so we brought Rudy with us into stores and tasting rooms and sat outside with him at a few restaurants. He loved walking around outside on the sidewalks sniffing everything, as well as being held when we were indoors. He met plenty of other dog friends and received a lot of attention — basically a grand time for him all around.

Speaking of dog-friendly, I was super excited that the folks at the family-owned Hofsas House in Carmel-by-the-Sea offered to host us in a pet-friendly room. I had seen Hofsas House before during our last visit and remarked on its unique exterior. It’s got a Bavarian theme, with pink walls, colorful murals and a very cute scene.

By the way, the busiest time to visit Carmel-by-the-Sea is late summer, and we were there during a holiday weekend, but it really never seemed crowded. The weather was absolutely perfection — with temperatures hovering in the sixties day and night.

And for some fun facts: Carmel-by-the-Sea has been called one of America’s Best Beach Towns by “National Geographic Traveler,” and the third Best City for Romance in the World by “Travel + Leisure.” Basically, we aren’t the only ones who love it there. 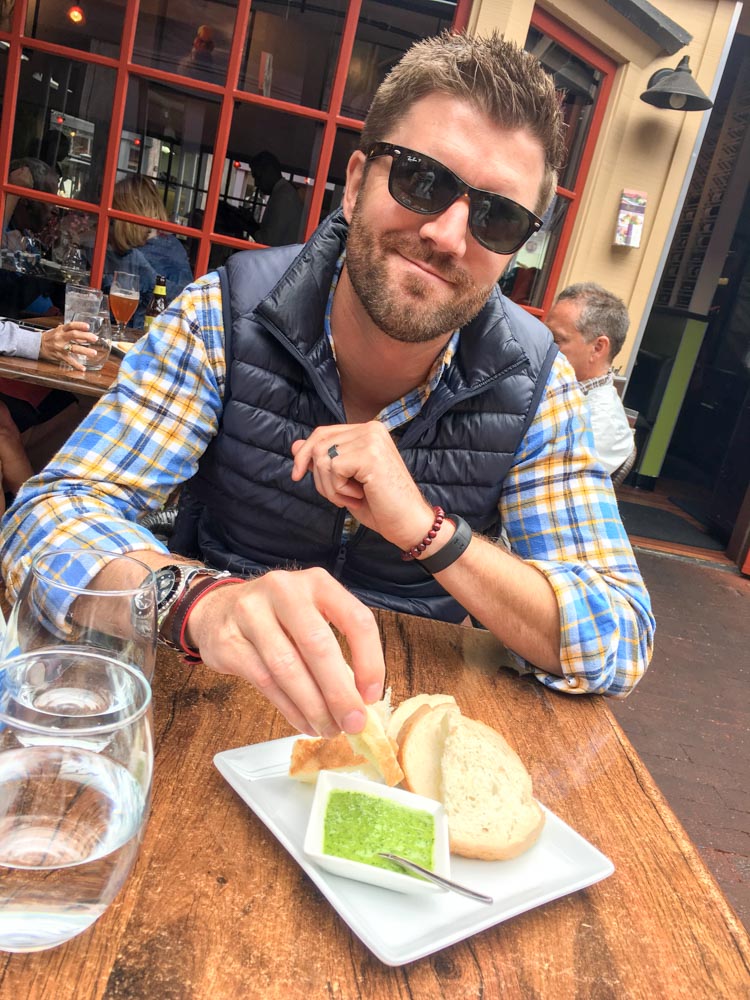 The highlights of Carmel-by-the-Sea

Some of the best parts about visiting Carmel-by-the-Sea?

You can walk everywhere. The streets are a grid, and because it’s just one-square mile you can get anywhere on foot in no time. Even though Dave and I didn’t have any trackers on (his was uncharged, and mine broke, so I’m currently without), we are sure we covered more than our daily allotment of steps each day and more. In fact, we only got in the car one time! And we enjoyed taking terrible photos in front of all of the cool doors and alleys. 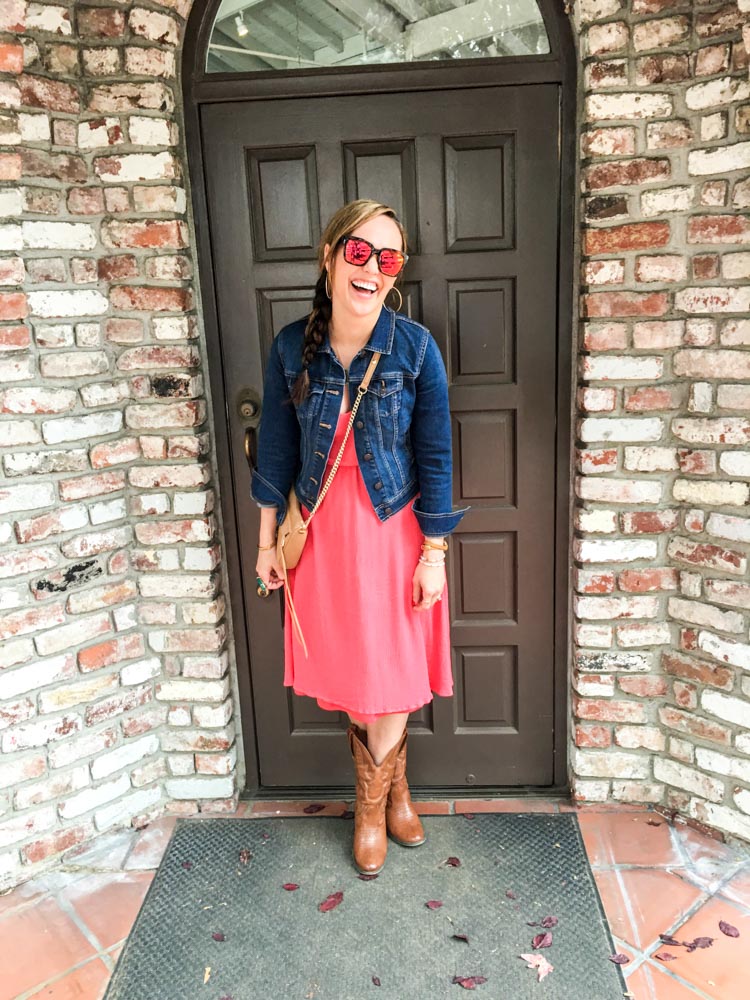 The beach. You can walk to the Pacific Ocean, put your feet in the sand and soak up the sea breeze. The beach at Carmel-by-the-Sea looks out at a beautiful cliff, and you can even see the famous Pebble Beach golf course across the way (which Dave has golfed at once and thinks of it as perhaps one of his greatest memories)! However, this was Rudy’s first time at the beach, and he freaked out. He ran so fast through the sand that it got in his eyes and he panicked. It was sad and also hilarious. 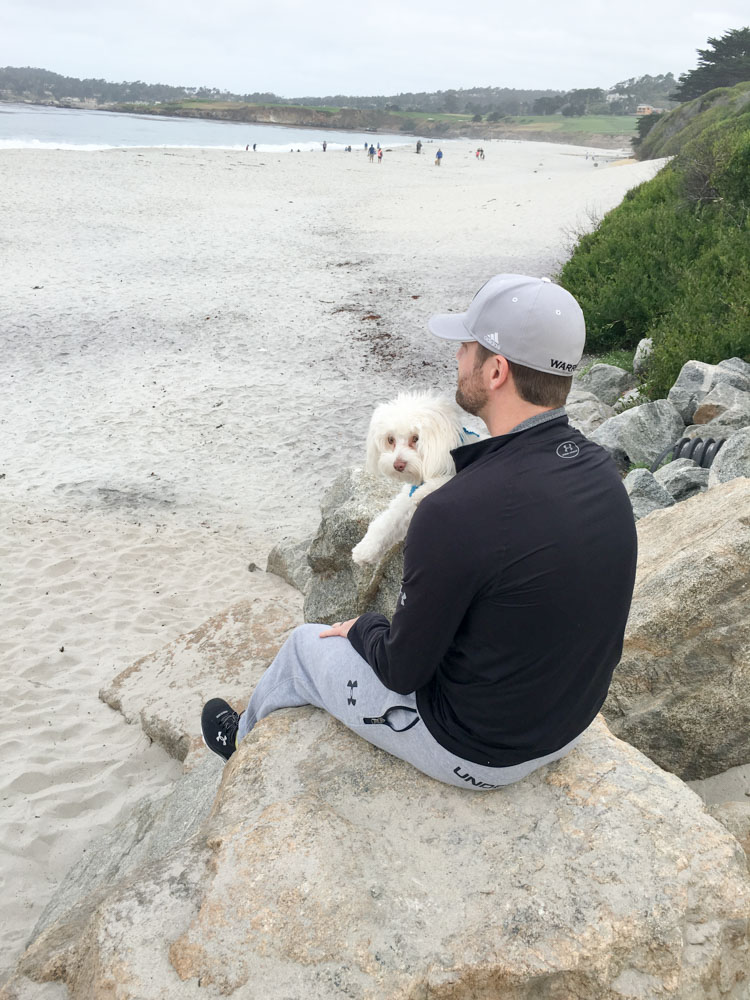 Wine! There are tons of wine tasting rooms (also dog-friendly) within the little downtown, and although tastings usually only cost $10-15 each, you can also get a “Wine Walk” tasting pass for only $65 and experience nine of the tasting rooms. The Hofsas House provided some “Wine Walk” passes for us, so naturally — we hopped around to many different rooms. Most of the wine brands have vineyards around Carmel Valley, and they send in their best products for tasting in Carmel-by-the-Sea. (By the way, you can buy a Wine Walk pass from your hotel or from the Chamber of Commerce, and I would highly recommend it as a fun way to spend the day, with some shopping at the boutiques in between.) 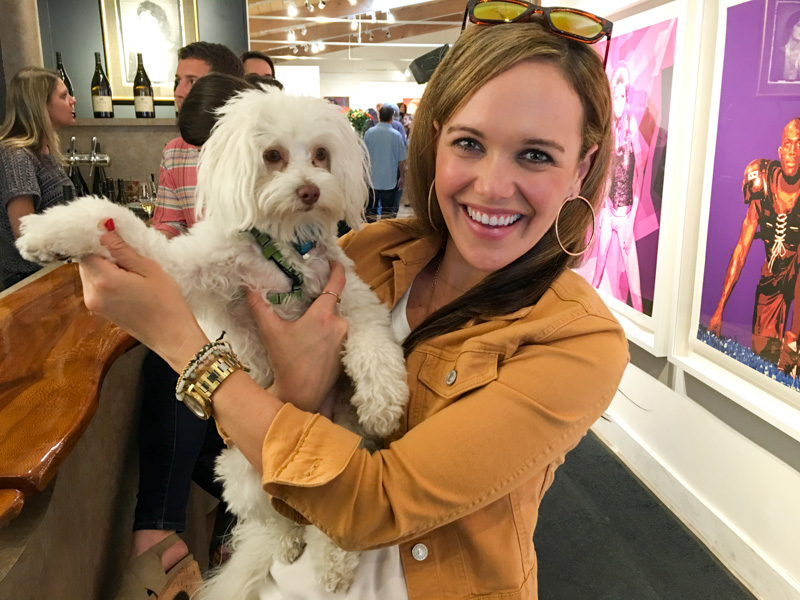 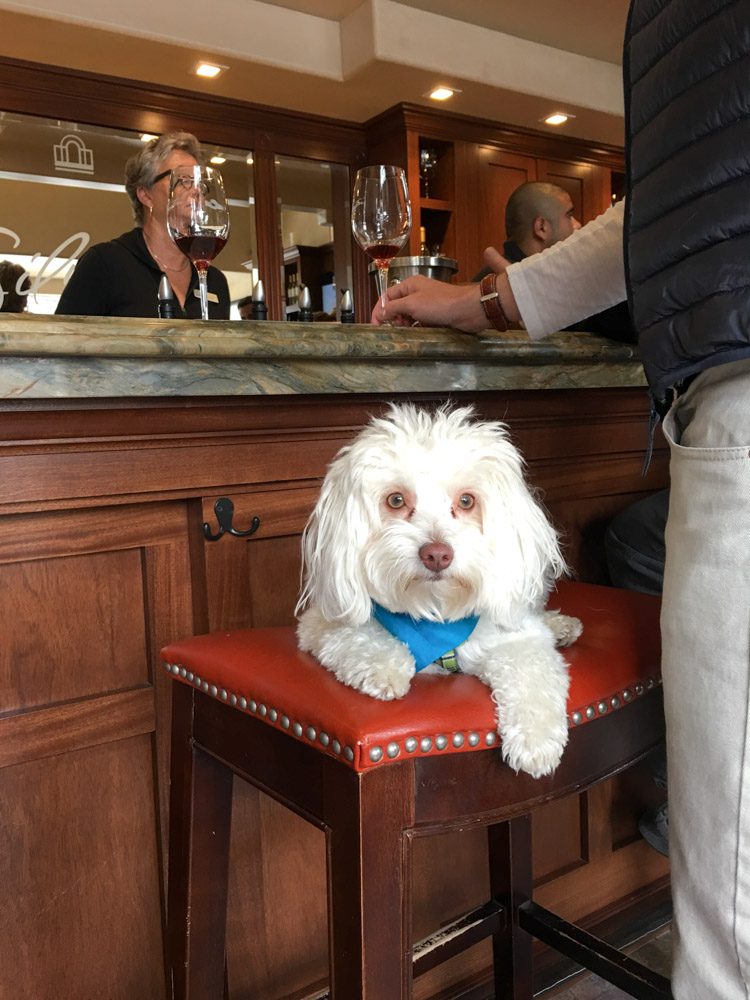 Did I mention it’s dog-friendly? At one point, we went into a tasting room, Galante, I believe, and there were six dogs in the tiny place, including a 140-pound Saint Bernard who was bigger than his owner. Can you imagine our 9.5-pound maltipoo next to a dog of that stature?

Great food! There are tons of restaurants in downtown — some fancy, some casual — and they range from Mediterranean to Mexican to Italian and more (with a super famous cheese store and locally made chocolate, as well). We enjoyed Italian the first night at Il Tegamino and Spanish the second night at Mundaka. Mundaka had the most incredible steak tartare appetizer that nearly filled us up. Worth writing home about! Another honorable mention goes to the teriyaki salmon sandwich I had from Fifth Avenue Deli, thanks to a little gift certificate from the hotel. Salmon on a sandwich is quite pleasing. 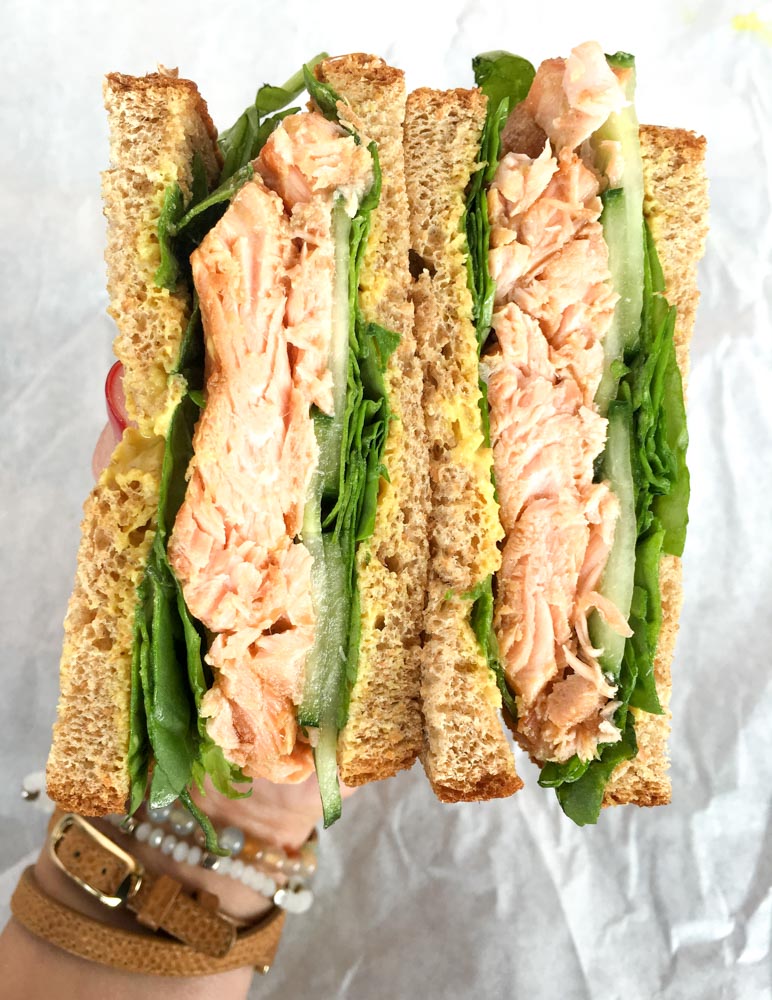 No chains, no hassles, just casual chic. Carmel-by-the-Sea has a European village vibe throughout, which really makes you feel like you are far away from home. Also, everything closes early and there is no nightlife, so it’s perfectly acceptable to wander home after a big dinner and get in bed at a reasonable hour. My type of place!

As for our stay at the Hofsas House? We didn’t spend a ton of time in our cute room, but we liked it when we did. Our room had a fireplace, which was incredibly awesome — and we put that on each day and night. We also had a nice patio. While there were other amenities at the hotel like a pool, we didn’t partake in that. Hofsas House does offer some pastries and juice as a continental breakfast, as well as free WiFi in the room — a major YES! 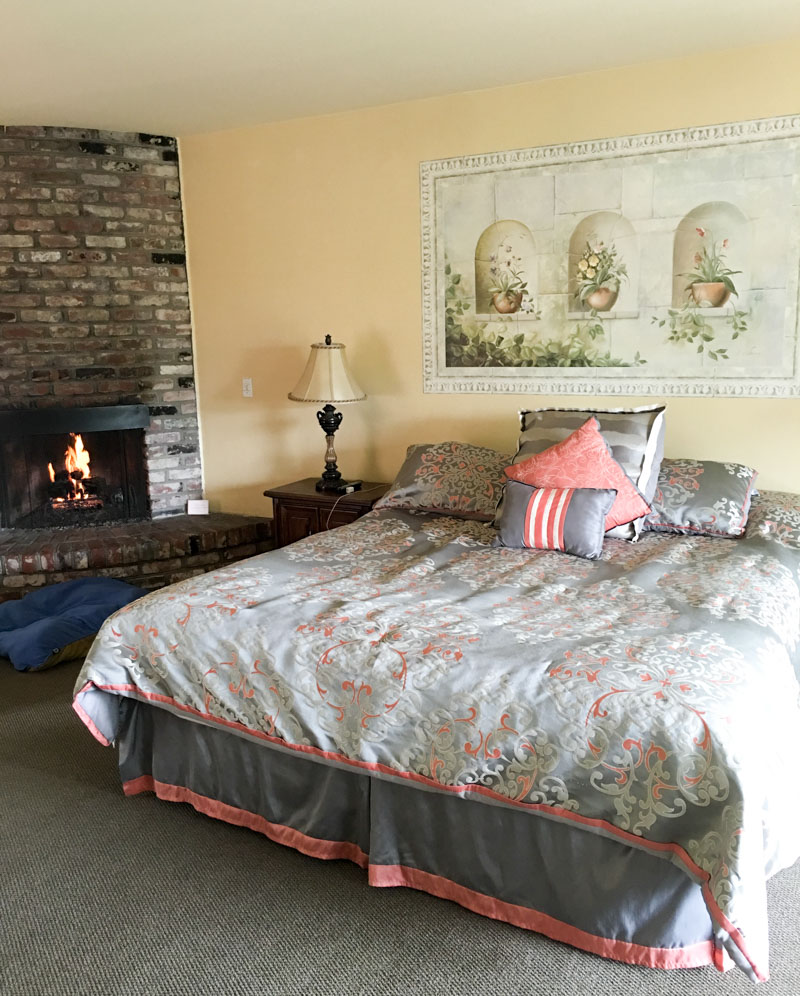 My favorite part about staying at Hofsas House — outside of the location — was when I spoke to the manager, who told me all about the history of the hotel. In fact, she is the granddaughter of Donna Hofsas, who started the hotel decades ago. The hotel is still family owned and every single one of the 37 rooms is decorated differently. When you walk up to Hofsas House, it’s like you’re in another world, stepping back into time, and I like that. Definitely a change from our uber-modern Las Vegas trip just two weeks ago. 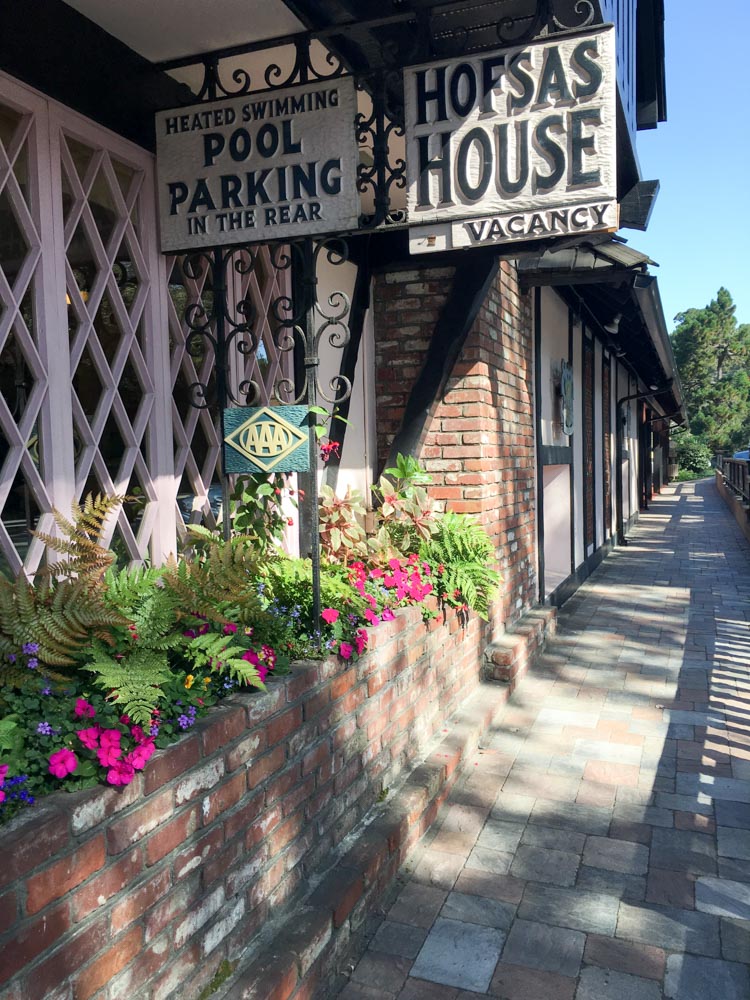 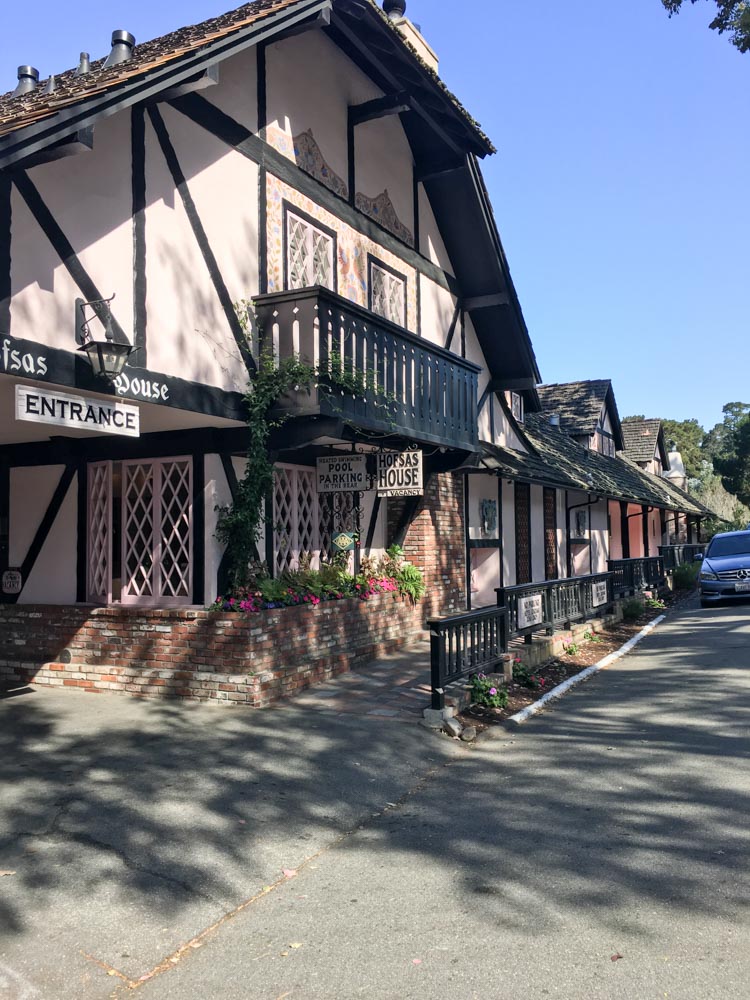 Something funny we noticed about many B&Bs and stores in Carmel-by-the-Sea is the half door — like you’d find in a preschool. We think it must have to do with the fact that a lot of places don’t have air conditioners, so they keep half of the door open for air flow.

During the weekend, we also ventured out to Carmel Valley, which is just 15 minutes from Carmel-by-the-Sea, and it was an absolutely stunning ride through the mountains and in the Valley. The vineyards were booming and the green grass was shining in the sun. The three of us made a stop at Holman Ranch Tasting Room for a full tasting and fun time with the host, Duncan. He let us try all of the delicious white and red wines, and while we were there a horse came out front just to visit, nearly putting his nose up over the half door. True story. We didn’t get to go tour the actual Holman Ranch property though, because a wedding was taking place and it wasn’t open to the pubic. Guess we’ll have to go back then! 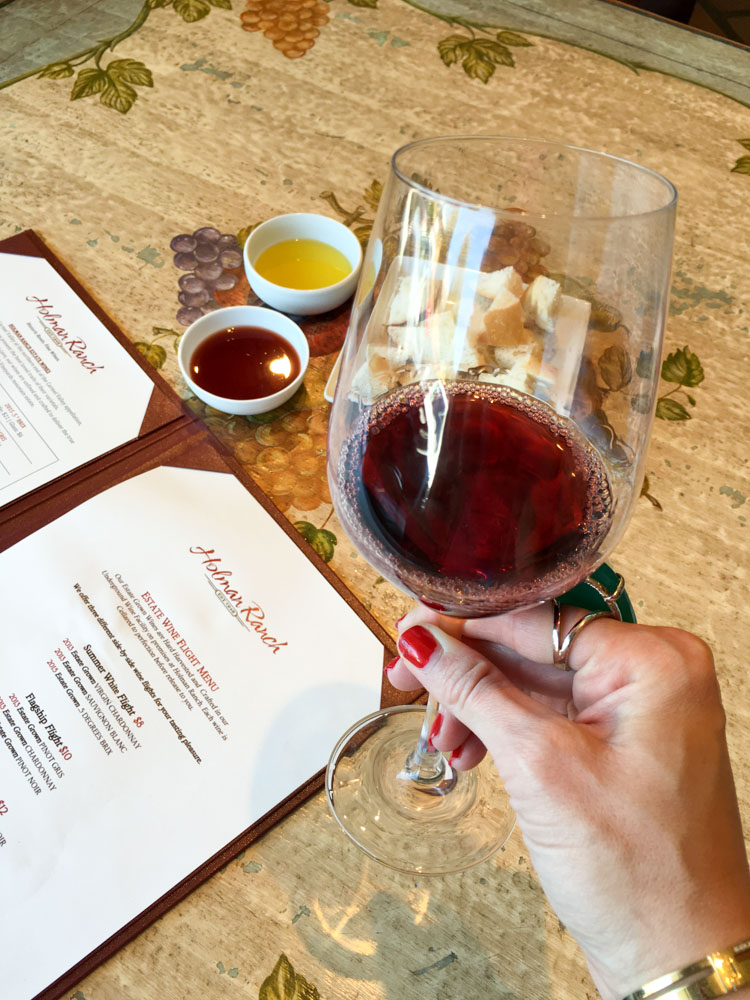 After some walking and breakfast on our last day, we packed the car and headed back to Walnut Creek, super satisfied with the adventure. Overall, it was a perfect little trip!

I’m coming back from this long weekend feeling like I went way far away, when in fact, I only drove a couple of hours. There are plenty of beautiful places to visit in California, but there’s just something different about Carmel-by-the-Sea — it’s quaint. Quiet. Unique. And just what we needed.

Planning a trip to #CarmelbytheSea? Here's how to do it right. #California #Travel #LaborDayWeekend Click To Tweet

I hope you all had a wonderful weekend as well!

*We received a free room from Hofsas House, as well as complimentary Wine Walk tickets, a meal from Fifth Avenue Deli and a tasting at Holman Ranch Tasting Room. However, all thoughts and words are my own. Thanks for the hospitality, Carmel-by-the-Sea. We hope to see you again soon!

Where was the last place you visited?

I'm a writer, trainer, group fitness instructor, new mom and foodie, and A Lady Goes West is where I share my healthy lifestyle, simple meals, fitness tips and experiences living in the San Francisco Bay Area.


Fun fact: If you take good care of your skin, you

You never know what little decisions you make ever

Every time I drop Brady off at preschool twice a w

Happy Monday, my friends! I just wanted you to kno

Just over here thinking about what I’ve learned

Where are all my hard-copy-planner-loving-friends

The last week, I’ve been in holiday and birthday

Couples who sweat together, stay together. But ser

A Lady Goes West is a personal blog meant for entertainment purposes only and does not serve as a substitute for professional advice from your own doctor, trainer or nutritionist. While I'm a certified personal trainer and group fitness instructor, the workouts, food and plans I post are what works for me and may not work for you. Please enjoy these stories and tips from my life, but proceed with caution. Also, know that affiliate links and sponsored posts appear from time-to-time, and I appreciate your support. For more information about how your data is stored, visit my Privacy Policy. Thanks for reading!