Hello, my friends! What a weekend. I hope yours was good. Today, I’m going to give you a recap of what’s been going on in my life over the past couple-of-days and talk about some fitness.

Walking in the Golden State Warriors parade in Oakland

On Friday, Dave and I joined all of his fellow Golden State Warriors employees to walk in a big parade around downtown Oakland honoring the team as the recently named NBA Champs. The parade culminated in a civic pep rally on Lake Merritt, and it was estimated that nearly a million people were in attendance. Yes, one-million-people. 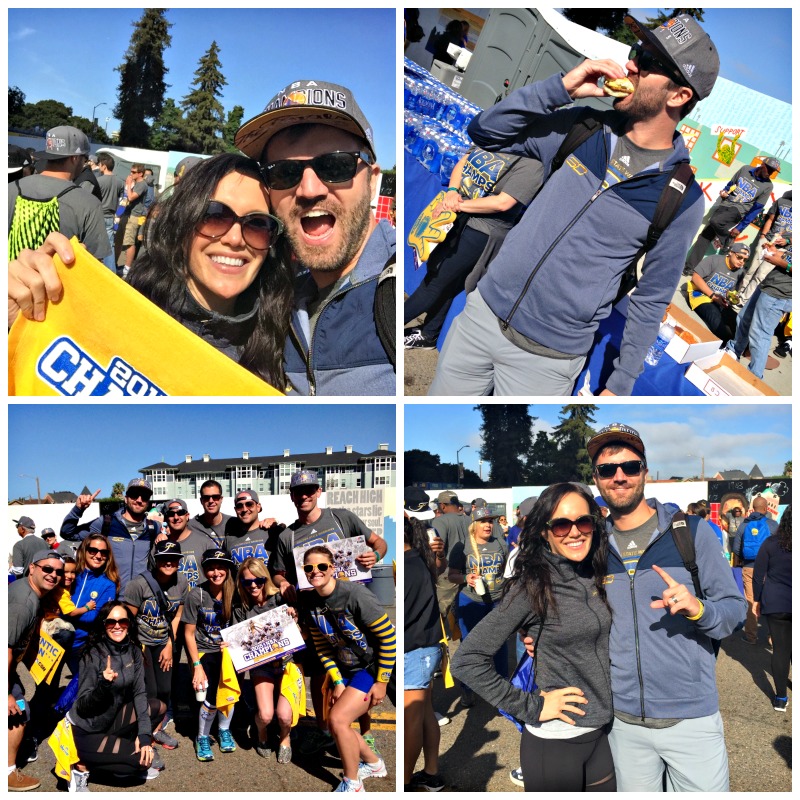 There was a waiting area for our group before the parade began, and the refreshments offered included muffins, pastries, smoothies and even McDonald’s breakfast sandwiches. Dave went for a sausage-egg biscuit from the Golden Arches, while I went for a fruity smoothie.

I can best explain the experience of walking in a massive parade in front of a million people like this — Moments of glory and moments of horror. It was an amazing feeling to march down the streets of Oakland with confetti being shot in the air, music blasting and fans chanting, clapping and calling out at you. While we walked the course, we took selfies with our friends, Dave took video using a GoPro, we laughed, we high-fived and we reveled in it all. Of course, that was just the first half of the parade …

The second half was not as fun. The crowds got a little wild and began jumping the railings and crowding the path. At one point, it was a complete mess, and by the parade’s end, we were fighting to get back into the staging area for employees, so we could get to our seats at the pep rally, having to show our wrist-bands to make it through security. I guess it was bound to happen, when hundreds-of-thousands of eager fans are in one place and are all in celebration-mode. That was the Golden State Warriors parade. 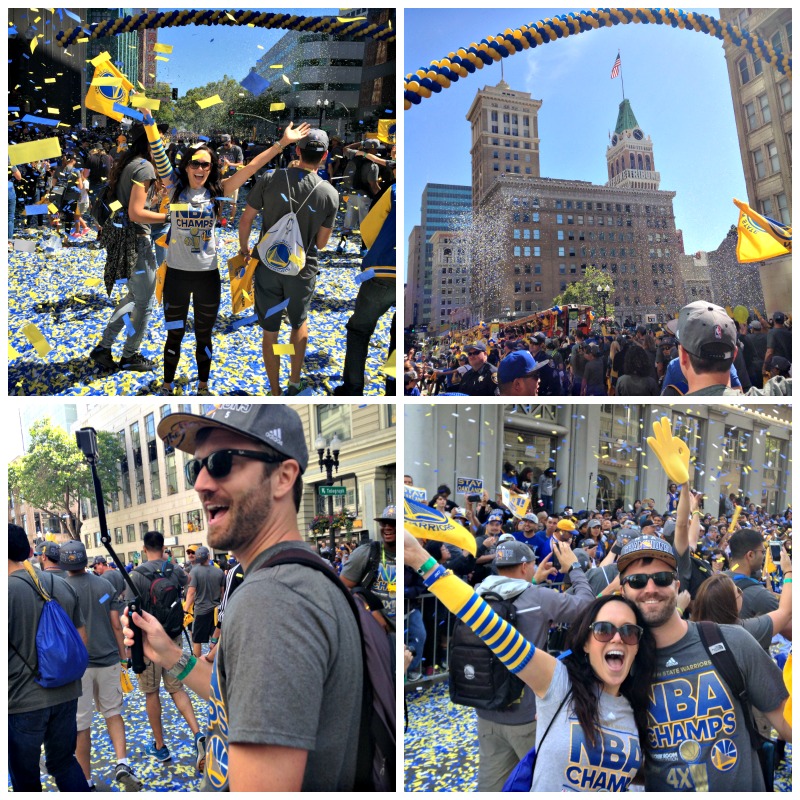 Dave did a great job of running by the crowd and capturing video footage of the madness. He’s hoping to edit that this week, so stay tuned for the clips.

After we finally made it to the pep-rally portion, we found our reserved seats and popped down to find that we were in direct sunlight. I would say the temperatures were in the upper 80s, but the bright sun was pretty rough. We were sweating, fanning ourselves and doing our best to stay shaded with hats, banners and whatever we could find. However, it was definitely worth it to enjoy the rally, which included funny speeches by players, video montages, a few typical politicians and words by the Warriors owners and leaders. What a team!

The funniest part of the day? I was wearing some leggings with meshed cut-outs, and because I was sitting for so long with my upper-thighs receiving direct sunlight, I got some ridiculous tan lines. Dave calls them my tiger stripes, and they are still super-apparent a couple-of-days later. Hilarious. I’m not sure how I will get rid of them, but they make a great story. All-in-all, I love that employees and their families were allowed to be a part of the parade and rally, and it was something we’ll never forget. Go Warriors!

Tiger stripes and all, after the pep rally, Dave and I joined some friends for a little while at Plank in Oakland. But the crowds and craziness were a bit too much, so we hopped on the BART and headed home to our little Rudy pup in the late afternoon. In the evening, Dave and I laid low, made an oven pizza, watched an episode of season three of “Orange is the New Black,” all the while, laughing at the things that had happened in our day.

Teaching classes and rushing around

On Saturday morning, I taught two classes at Orangetheory Fitness, rushed home to shower and change, and then Dave and I took Rudy for his first vet appointment. He did great with the doctor, and we learned a ton about how to better care for him. Turns out, Rudy is exactly four-months-old, about five pounds and a little cutie (well, we knew that!). He needs a few more shots before he can be around other dogs, so we were encouraged to keep him at home as much as possible, but socialize him with friends and family. He actually hasn’t met anyone other than us yet, so we’ll be doing that soon. Any takers??

Take me out to the ballgame in Oakland

Another weekend, another sporting event. After dropping Rudy off at home post-vet visit, Dave and I headed back to Oakland to catch an Oakland A’s game at O.co Coliseum (yes, that’s the name of the arena). We received some gifted tickets to sit in the Diamond Club at the stadium, which we had done once before, and it was fabulous. Our seats were right behind home-plate, and we had free food and drinks and a server for most of the game. It was another hot day in the sun, so we slathered up in sunscreen, ordered some cold beers and soaked up the baseball-loving scene. Being that it was all-you-can-eat, it was a bit of a gorge-fest for us both. I don’t do well around buffets, and so I felt like I should order a little bit of everything. Dave agreed. I can’t remember the last time I had Cracker Jacks, a fluffy pretzel and Blue Bunny ice cream, and it was all as wonderful as you would imagine. 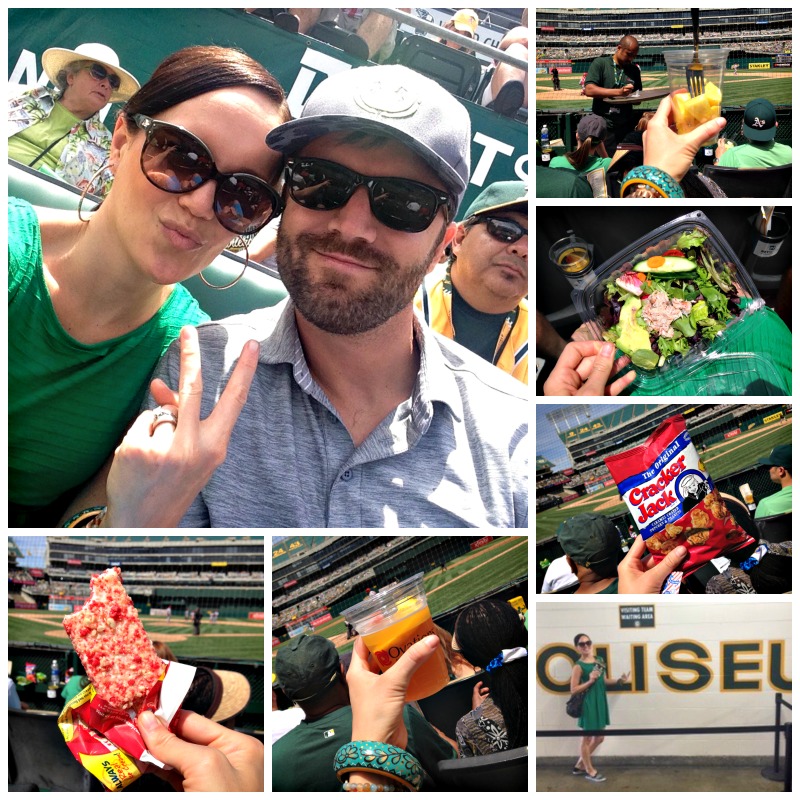 Balling? Yes, we watched the game, chatted with our seat-mate neighbors, and I spent the entire game in fear of my life, seeing as the foul-balls were flying over our heads.

On Saturday evening, Dave and I went out to dinner to Vanessa’s Bistro 2 in downtown Walnut Creek and had some tasty small-plate Vietnamese fare. Then we went home to hit the hay. I wanted to stay up to watch “Saturday Night Live,” but once again, I didn’t make it. (Which just-so-happens to be a running joke in our house — one of these days, I’ll actually catch that show live!) 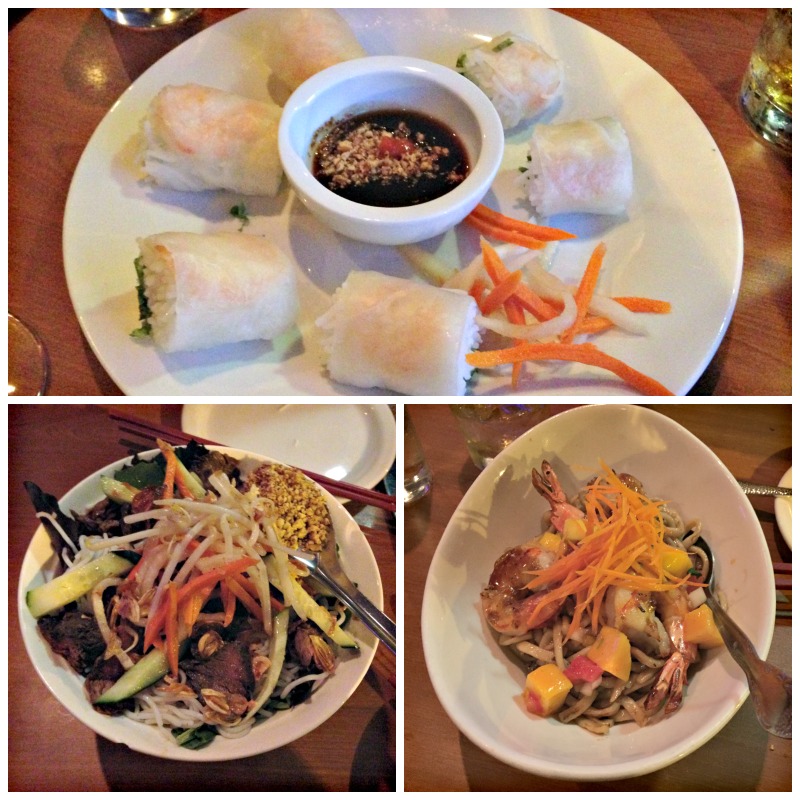 Dave got to choose our items on Saturday night, so he went with the prawn spring rolls, vermicelli filet mignon salad and jumbo prawns in garlic noodles. Not what I would have chosen, but it was all totally delicious, and we licked our plates/bowls clean.

Sundays are for sweating and catching up on life

On Sunday, I went to the gym in the morning to take a Les Mills GRIT Plyo class from a fellow instructor friend, Will. While I almost always use Sunday as a rest day, I had an unplanned day away from exercise on Friday with the parade festivities, so decided to fit in another session. I’m glad I did, because Will put me through an awesome class. I hadn’t taken a 30-minute GRIT class in a while, and man, it was tough, but efficient.

The rest of the day was full of chores. Now that it’s officially the off-season from the NBA, Dave will be home more and our lives should be a little less crazy. That being said, we decided to address a few things around the house, which had been slightly neglected. We did some deep-cleaning of nearly every room, and I even went through my closet and drawers to pull out clothing to donate. To top it off, we gave Rudy his first bath. Good times!

We finished out the weekend with a grilled meal at home, then laid on the couch for some family time. An eventful and fabulous couple of days, if I do say so myself.

(By the way, if you haven’t already, there’s still time to enter to win some delicious and healthy GoMacro Macrobars. Check out the giveaway now, because it ends tonight.)

Because it’s Monday, it’s time to take a look at my last week of workouts …

This past week was a little bit different for me. While I was supposed to be teaching several additional Les Mills classes, I had to get them covered at the last minute to participate in the Warriors parade. That meant I had an off-day on Friday, which gave me a chance to take a class on Sunday. Les Mills GRIT Plyo is an incredibly challenging 30-minute session full of jumping moves, which also features weights. I loved the chance to be a student and have a coach pushing me. Overall, I fit in three cardio sessions (BODYATTACK and GRIT Plyo), as well as two-and-a-half strength sessions (BODYPUMP and Plyo/CXWORX), and a short jaunt of yoga. Good stuff.

Once again, I’d love to see my week consist of a full three strength-training sessions, yet I didn’t quite hit that this past week. But I did my best, so we’ll call it a day. I mean, I did as many lateral-burpee-jump-over-a-bench-with-risers as I could on Sunday in GRIT, so that’s got to be enough.

That’s all I’ve got, friends! Because it’s Monday, today, I’m teaching a couple of classes at Orangetheory in the morning and teaching BODYATTACK tonight. See you back here tomorrow!

Have you tried a new workout lately?

Have you ever been in a parade?