Is it better to lift heavy weights or light weights? That’s the age-old question. Ask many personal trainers or fitness buffs, and you’re bound to hear that you absolutely have to lift heavy weights to get stronger and build lean muscle. And I’ll admit, I believed that same thing for a while. But over the years, I’ve found a few things about fitness to be true:

We all need resistance training

I am pretty adamant that people of all fitness levels, all ages and varying abilities can benefit from resistance training of some sort, because strong muscles, strong cores and mobile bodies make you feel good and help you get through the day. And while yes, you should be thinking about fitting in at least two resistance sessions each week, maybe you don’t have to be so worried about lifting up super heavy barbells or standing in a squat rack in order to get strong. Here’s why … 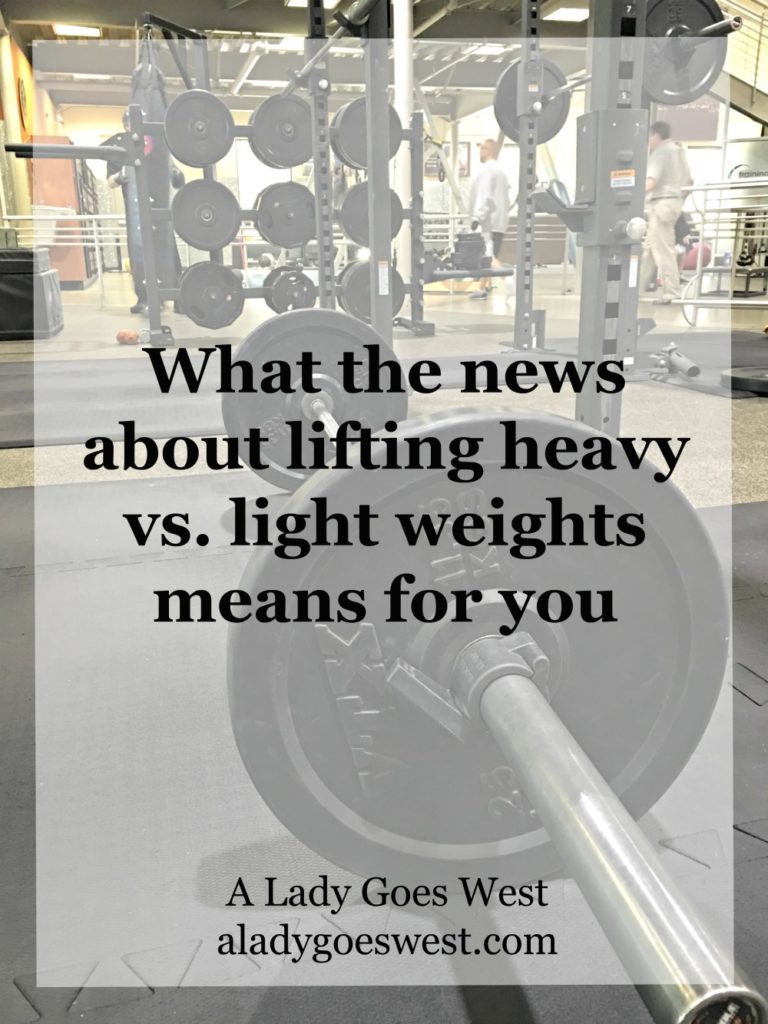 The latest news on lifting heavy vs. light weights

The topic of whether to lift heavy weights or light weights recently got a flush of interest as The New York Times published a study that basically said both types of lifting gets you fit and strong. The study followed two groups of people and tracked their progress: One group lifted lighter weights, completing more repetitions, while another group lifted heavier weights, completing less repetitions. Both groups lifted weights until the participants hit fatigue, meaning their muscles were tired, and they didn’t feel like they could properly perform another repetition.

There have been many studies like this before, but the reason this one matters more than others is because the people in the study had already been lifting weights for a year and all of their health was assessed before and after. They weren’t starting from scratch.

All volunteers (who were all male, by the way, so let’s hope they repeat the study with women) performed three sets, four times per week, for 12 weeks. And don’t you know, there were absolutely no significant differences between the two groups in growth at the end of the study. They had all gained muscle strength and size, (which we call hypertrophy), no matter the weight that they lifted.

That result comes as a surprise to many who may be thinking that lifting the heaviest thing you can is the only way to get strong and lifting heavy gets you results faster. When it comes to the general population and everyday exerciser, maybe sticking to what you’re comfortable with (if that is lighter weights) is fine, as long as you do it right.

The big takeaway here is that you must work until fatigue in order to get the benefits of resistance training at all – heavy or not. Exhaustion gets your muscles tissues going, so that they grow. Now let’s put it into play in our own lives …

I think that this study validates a few fitness programs that have been laughed off by hardcore exercisers and weightlifters: barre classes and BODYPUMP. (Why anyone would laugh about BODYPUMP amazes me, because clearly those people have never actually tried it. #BiasedAndIKnowIt.)

When you go to a barre class, oftentimes the upper-body portion involves picking up 1 pound, 2 pound, 3 pound or maybe 5 pound weights only, never heavier. And if you’ve ever tried barre, you know that your arms can feel like they are going to fall off a few minutes into an arm song, using those little tiny weights, and that means you are hitting muscular fatigue. Thanks to the new study, I think we can consider this fatigue in barre class, just as beneficial for our arms as lifting heavier weights for a shorter amount of time. (As long as both are done with proper form, of course.) However, as a note, the resistance training in barre classes is somewhat limited to only a very small portion of class and mostly upper body, so if all you do is go to barre, additional resistance training is probably ideal outside of the barre studio. But those reps you do inside count too!

The same goes for my beloved BODYPUMP class, which I teach (and participate in) twice a week. BODYPUMP offers participants the chance to take nearly every muscle group to fatigue with about five minutes of work per song, per muscle group, using weights far from someone’s one-rep maximum. While I would never say the weights in BODYPUMP are light (certainly heavier than barre classes), but they aren’t super heavy. Thanks to the new study, we can probably consider the complete muscular fatigue achieved in a high-repetition class like BODYPUMP beneficial for building strength.

The place where this study and its results gets fuzzy is with the terms muscle strength and muscle endurance. A lot of times, people in the fitness industry classify work in terms of muscular strength (less reps, more force required) and muscular endurance (more reps, less force required). These two things are somewhat intertwined, and this study calls their relationship into question, because both groups gained strength. The moral of the story is that we need both endurance and strength, and maybe we’re actually working on them at the same time. I think we’ll hear more about this one day as the study is repeated to include women.

Maybe you only have one set of rusty old five-pound dumbbells laying around a gym membership isn’t in the budget. Can you still build muscle? Yes.

Maybe you have no desire to circulate the gym floor and want to do all of your exercising in the group fitness room. Can you still build muscle? Yes.

Maybe you get a huge rush from picking up heavy things, but only hit the gym for a few minutes at a time. Can you still build muscle? Yes.

Your workout routine and resistance workout routine should have variety. You should change up your exercise moves, weights and repetitions regularly to challenge yourself, but you don’t have to beat yourself up if you’re not interested in lifting super heavy.

While heavy weights have many benefits and may be essential to bodybuilders, athletes and anyone who loves to lift them as their resistance training of choice, they are just one of the many options. Resistance bands, medicine balls, TRX, dumbbells, kettlebells and even those tiny pink weights from barre are all valuable and viable choices for your weightlifting needs.

To be honest, I actually like to lift heavy weights for only a few repetitions and often incorporate that into my workout program each week to complement my BODYPUMP sessions. And a couple of months ago, I even worked with a trainer for six weeks to lift really heavy stuff. I enjoyed it because it gave me the chance to try something new, and it switched up my routine. I know others love the thrill of hitting a PR in the gym every few weeks with big weights, which makes them motivated to continue adding more and more weight. But if that’s not you, it’s okay. You can achieve your own PRs through bodyweight work, extra repetitions, perfect form and more.

Moral of the story: If you want to get strong, focus on performing QUALITY repetitions until you’re tired, and you’ll get the benefits. And don’t you ever talk bad about BODYPUMP. Just sayin’. Happy lifting, my friends!

What the news about lifting heavy weights means for you. Find out here ... #workouts #fitness Click To Tweet

Want to learn more? Head on over to the fitness page for short workouts and tips.

What’s one thing you’ve learned about fitness that you hold true?