We will file this one under the “I didn’t wake up knowing I wanted to learn this random information, but I’m sure glad I did” tab. Because we can’t talk about food and fitness every single day, can we? Nope.

True story: This post is inspired by my Mom. Knowing that I’ve been a little busy lately and needed some help coming up with ideas for posts in preparation for my vacation, she took it upon herself to start the research on this and send it to me. And I mean, how could I not share this information with you today?

Without further ado, let’s talk about the origins of a few old sayings or idioms that you’ve heard over and over again and may even be using in your everyday speech. But first, let’s define a couple of things …

There are many stories behind the most popular sayings

PLEASE NOTE: When I looked around online to do some more research on these phrases, nearly all of them said that these origins were “believed or assumed,” and there were oftentimes more than one story or claim. So no, this is not a hard-facts encyclopedia definition. It’s just fun. Enjoy, and take it all with a grain of salt (one of the popular phrases you’ll see below!). 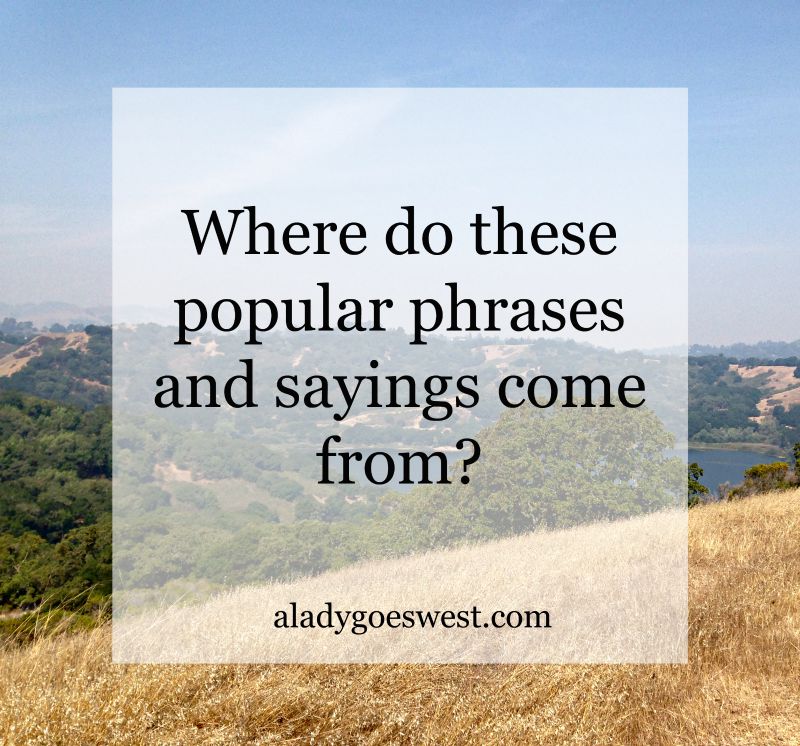 These definitions are completely unproven, but it’s been said that during the 16th century, houses were made with thatched or hay roofs, and dogs and cats would climb up onto the roofs and sleep among the thatches, because it was a warm spot to hide. Well don’t you know it, when it rained, those animals would at times be washed out and fall off the house. Thus, a heavy rainstorm, means it’s raining cats and dogs. However, a secondary origin could be the fact that in 17th century Europe, sanitation was just awful, and during heavy rainstorms, dead animal corpses would some how end up being washed down the streets. Totally gross. Either way, I don’t like these origins at all, but I do like the phrase. And boy do we need rain here in California right now.

“Heard it through the grapevine” … meaning getting information via unofficial gossip.

A popular song lyric from the 1960s may be what you know of this phrase, but it’s also got a couple of supposed origins. First of all, in the 19th century, when telegraph lines were being constructed, they hung on poles or even trees across mountains and land, much like you would see grapes hanging on. There was also a “grapevine telegraph,” which was more of a community-to-community version of the better and more reliable electric telegraph. Sometimes information transmitted via the grapevine telegraph was distorted or messed up upon arrival, thus people would have to say that what they were reporting was “heard through the grapevine.” Not sure about this one, but it seems to make sense. And the song lyrics make me think of the California Raisin. Anyone else?

“Take with a grain of salt” … meaning to accept something, but be a bit skeptical of it.

Much like this entire post, sometimes you don’t have to fully believe everything you’re told (especially if you heard it through the grapevine?). Once again, not really a full history of the origin of this one, but most sources seem to say that in Ancient Rome, someone called Pliny the Elder, discovered a natural antidote to poison, which included a grain or pinch of salt. So perhaps that version would mean if you give someone bad news, then the salt will lessen the blow and protect you from being fully poisoned. Another origin said that if you think about the weight of a grain of salt, it doesn’t add much to a scale, so adding a grain of salt shouldn’t sway you one way or the other. I guess I could understand both. But of course, I’d like to think this phrase is totally food-related, but maybe it’s not.

“In the nick of time” … meaning doing something at the final moment.

It seems like this one is somehow from the sports world. Back in the 19th century, commercial transactions and scores in sporting events were tracked with tally marks on a nick-stick. A nick was a thin, narrow and precise measurement, and you would “nick down” to make a mark. Somehow that morphed into getting something done at a precise or right moment, thus in the “nick” of time. This one makes total sense, so I hope that it’s true. And yes, I often get things done in the “nick” of time, but it’s a stressful way to live. Am I right? That’s why I’m already packed for my Hawaii trip, three days before lift-off.

So there you go. There were so many more idioms and sayings that I wanted to research and share, but I figured four should do for now. I actually like the fact that none of these phrases had an exact or verified origin, which makes this etymology stuff all that much more fun. And hey, now that you’re armed with new and unsubstantiated knowledge, you’re ready to take on the day!

Fact or fiction? Check out the history of these popular sayings you may be using ... Click To Tweet

What’s your favorite saying or idiom?

What’s one saying that you hate to hear?