Sometimes you have those kind of weekends that make you really happy and grateful for things in your life. This past weekend was one of those for me. Dave and I hung out with so many friends, tried a new workout, went to a Christmas show, attended a holiday party and had an all around awesome couple of days. It was one of the best weekends that I’ve had in a while, full of festivities. Let’s chat about it …

Friday evening dinner in the Mission

On Friday evening, Dave and I met up with our friends Lexy and Rhodes for drinks in downtown San Francisco. We had originally planned to meet at Press Club, but it was closed for a private holiday party. So after trying a few busy venues, we ended up in the lobby of the Marriott Marquis, which was actually the perfect setting for catching up. Plenty of space and a little more conducive to conversation. We haven’t seen the two of them in a while, and it’s always a delight sharing stories on life and laughing. We were only there for a little over an hour, but it was still fun. 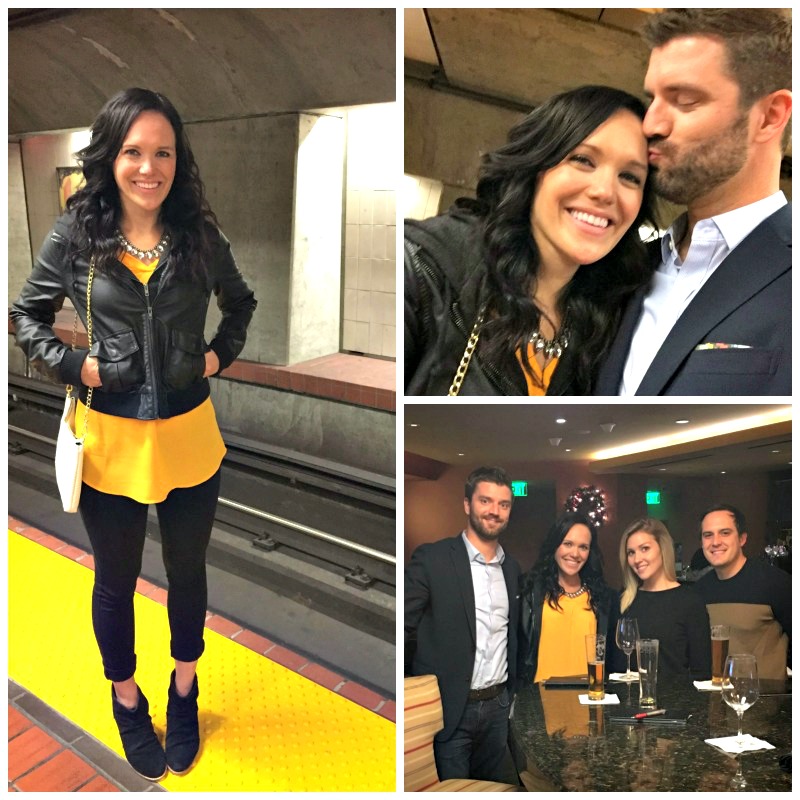 Scenes from the City included my coordination with the BART station.

From there, Dave and I Ubered over to the Mission neighborhood to Kitchen Story, a small and trendy Asian fusion restaurant. We met up with a couple of people that Dave went to Rollins College with and their significant others. I didn’t really know anyone at the dinner, which always adds a new fun element. In fact, it brought me back, because for the first couple of years of living in San Francisco, we were always hanging out with new people, and it’s been some time since we did that. It’s good to get out there every once in a while and branch. 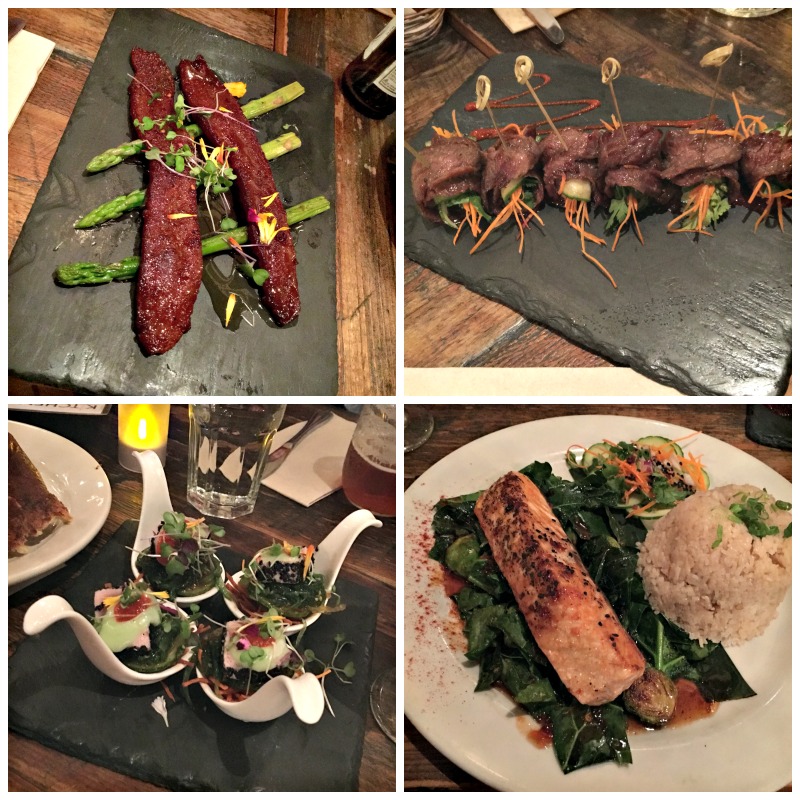 The Millionaire’s Bacon on the top left was totally scrumptious. I’d heard about it before and was so excited to finally get a taste. Other delicious appetizers included beef roll-ups and ahi tuna cups, and I finished off with a very strong salmon entree. Nice work, Kitchen Story.

The six of us enjoyed an amazing meal over great conversation, talking about travel, life in the Bay Area, their old college stories and more. I haven’t been to the Mission to eat for a very long time, and boy the food there is always impeccable. Totally worth the trip.

After a two-hour dinner, Dave and I took the BART back across the Bay to get home and just so happened to have a chance encounter with one of Dave’s former coworkers on the subway platform, which was a great way to end the night. Small world.

Trying out FlyWheel on Saturday morning

On Saturday morning, Dave and I met a few friends to try a 45-minute FlyWheel class. There is a new FlyWheel in downtown Walnut Creek, and I’ve now gone three times. I must say, I’m pretty impressed. This was my first time in the cycle class though, because both times I’ve been, I’ve taken a FlyBarre class. It’s definitely a different set-up, and I’ll post a full review soon. But I’ve got to say that Dave was such a good sport during his very first time taking any sort of cycle class, and he said it may have been his favorite of the workouts that I’ve taken him to over the years, including my classes. How about that. 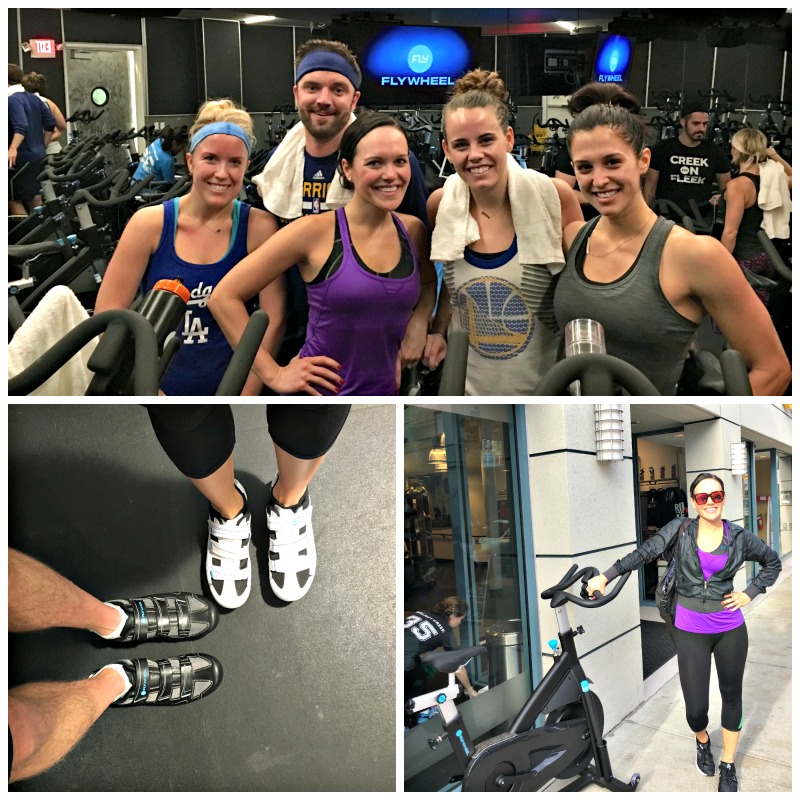 Those red faces should give you an idea of the fun we had on the bikes.

After some chores, errands and time in the kitchen cooking, Dave and I headed over to our friends’ house for not only a holiday Christmas sweater party, but also a surprise going away party for a couple. There were nearly 30 people decked out in festive holiday wear, and so of course, we had to take a self-timed group shot, which I orchestrated. Over the course of six hours, we watched the Warriors play, ate tons of great food, took plenty of photos, laughed a whole lot and had one heck of a time. Good times! 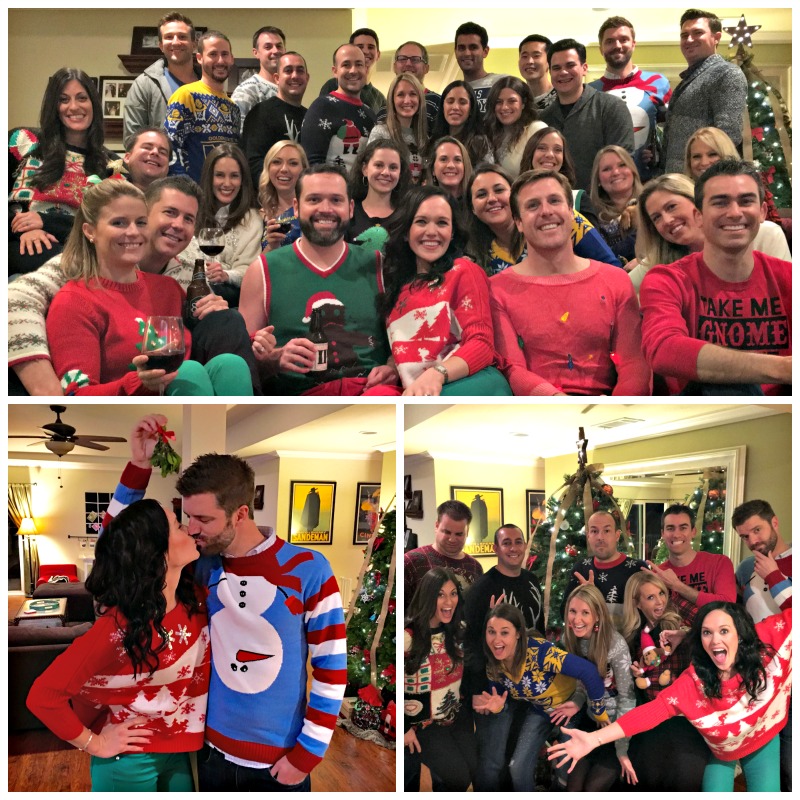 Would you believe it only took two tries for us to get that shot of every single person at the party? I propped my phone up, set the boundaries and corralled the group in less than five minutes time. So glad we did that!

Getting into the Christmas spirit on Sunday

And the weekend fun continued on Sunday. In the mid-morning, I met up with some of my girlfriends to make truffles and have brunch, which was just fantastic. The whole truffle-making process is definitely something I’ll share more about, but suffice to say, in addition to having fun, we also had some seriously sweet treats to enjoy on the spot and save as gifts. 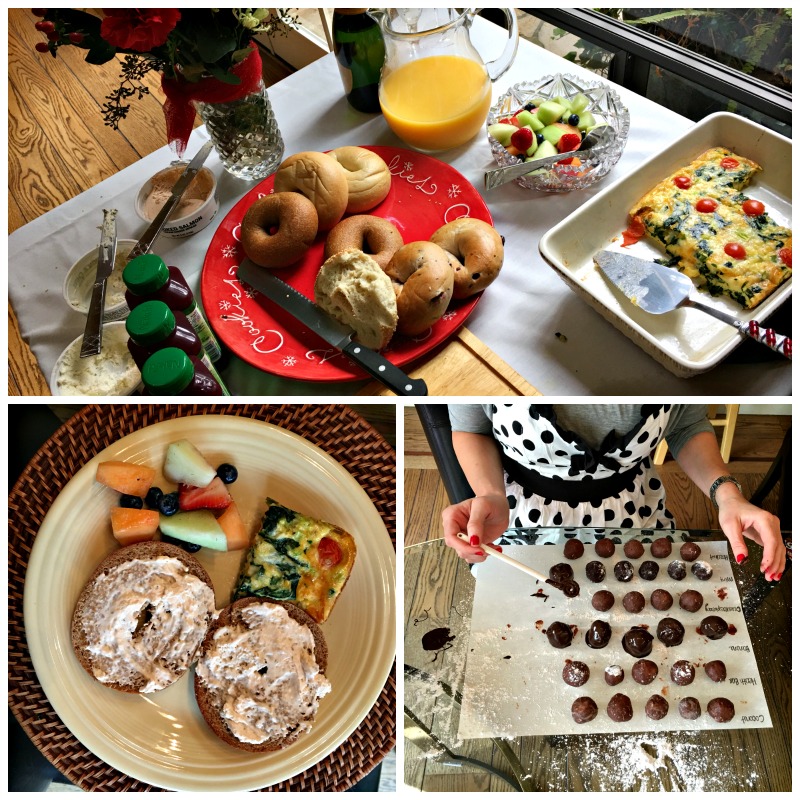 Before we dug into the chocolate, we had a delicious brunch consisting of bagels, a baked cheesy egg casserole and fresh fruit. By the way, have you ever had smoked salmon cream cheese? If not, I highly suggest it.

In the evening, Dave and I made an early dinner at home and then went to see “A Christmas Carol” at the Lesher Center, which is a performing arts hall very close to us in Walnut Creek. The show was super enjoyable, and it was a nice way to top off one awesome weekend.

As always, each and every Monday, I like to show you all of the ways that I’ve been active. So let’s get to it …

This past week was a good one when it came to workouts. I was back to five workouts over the course of seven days, which included some great variety. Perhaps the highlight, was returning to the treadmill in an Orangetheory strength-based class this week, which had me doing some serious inclines. It felt awesome! I essentially had two rest days as well, with one seriously gentle yoga session and a full day off. Overall, I picked up weights three times and did plenty of cardio, so this one was complete.

What could have been better about my workouts?

This past week was solid, and the best one I’ve had in the workout world in about a month. Two thumbs up!

Hope you have a great day, my friends! (P.S. Thanks to Meghan for hosting today’s “Week in Review” link-up.)

What was the highlight of your weekend?

What’s in store for your week?