This past weekend, we celebrated Brady’s first birthday, on his exact birthday, September 30, and I wanted to share a glimpse into the party with all of you. Truth be told, his birthday was pretty significant for us, and both Dave and I felt so proud, a little sad and altogether just blessed to be one year into parenting our chatty little man.

I’m still planning to write an official “one-year update” on Brady too, so let me know in the comments if you have any questions or topics you’d like included in that post. 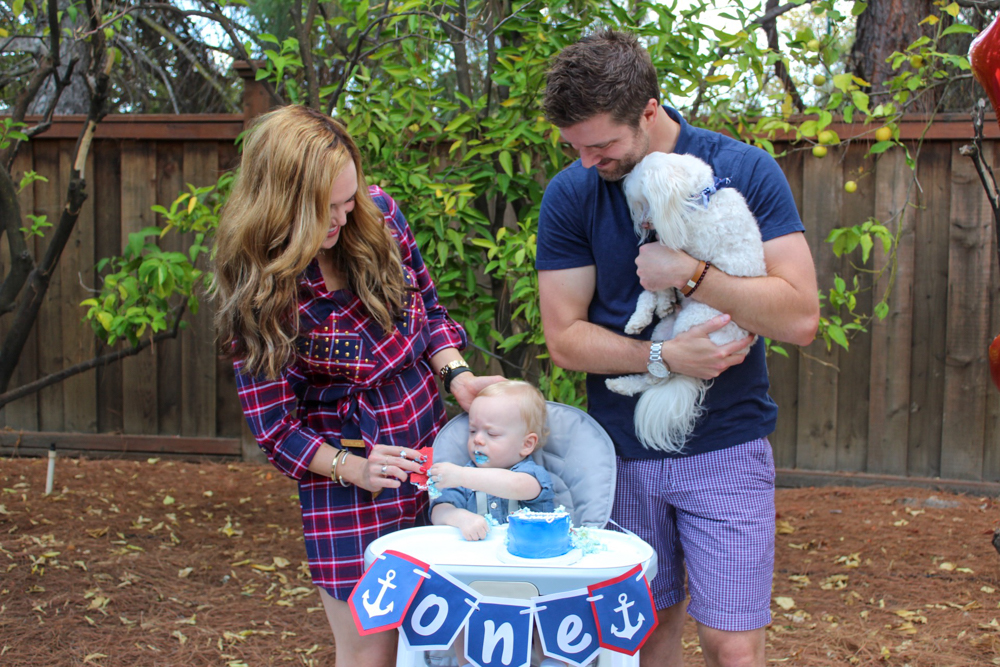 Let’s get to the party …

When we knew that Brady’s birthday was falling on a weekend, we decided to go ahead and have the party on his actual birthday. And once we had the date set, I threw the idea out there to my brother and his wife, who live in Atlanta and were married earlier this year, and they said YES they would come. Woohoo!

I already knew that my sweet and wonderful mom would be in town from Florida (which we planned intentionally so she’d be here for the party), so instantly, I was beyond ecstatic to have some of my family (most of my family actually, but my dad wasn’t able to come) in attendance. Being that they live so far, that’s a big win. We also had some of Dave’s nearby family too.

Dave and I had no problem deciding on a nautical theme, which not only matches Brady’s nursery decor, but was also the theme of my California baby shower. With the theme and date in mind, I went ahead and selected these invites on Zazzle, then sent them out to our friends and family about five weeks in advance.

After we sent out the invites, we really didn’t do any planning until about two weeks before the party when we knew the amount of guests we’d have — 35 adults and 10 kids — so nearly 50 people with us included. Wow!

A picture perfect day for an outdoor party

The day of the party was perhaps the best weather we could ask for. Mostly sunny skies with temperatures in the mid-70s, which meant much of the party could take place outdoors, using our pretty big backyard area.

We borrowed corn-hole and an extra table from friends and figured we would keep the rest really casual, with football on the outdoor TV and lots of drinks flowing — because as we know, kids’ birthday parties have to have adult beverages. 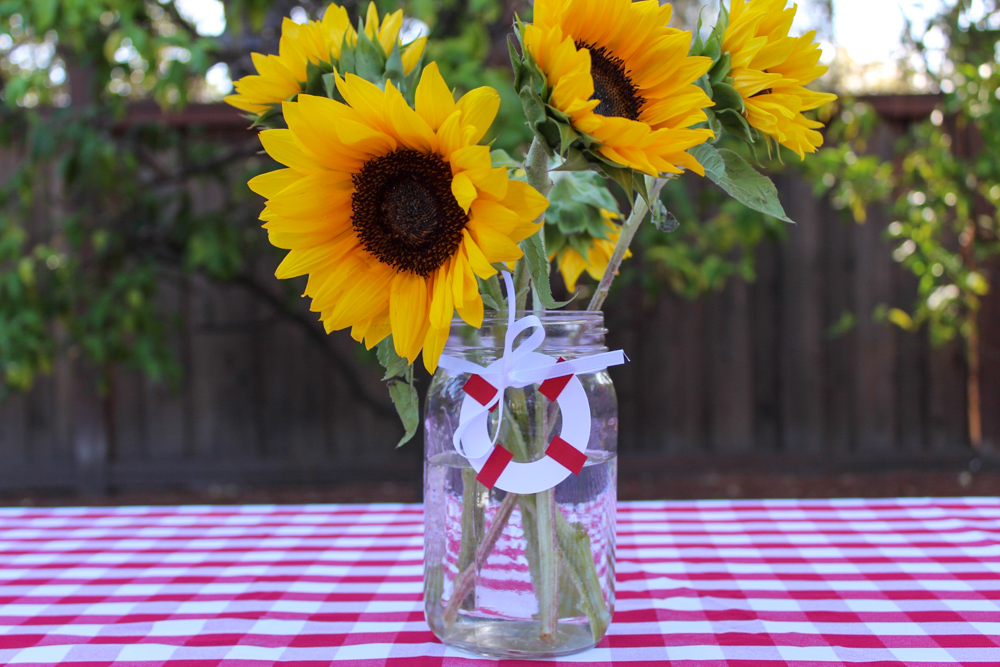 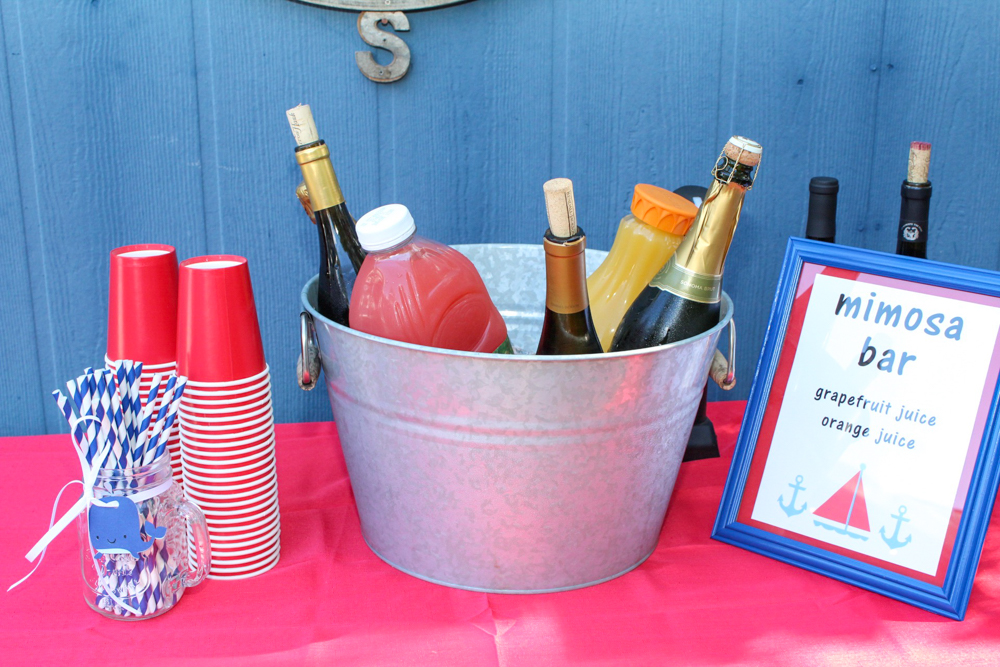 It was a little hard to decide how much food we needed, but we did our best estimating and ended up getting more than was needed, but not that much more, so there was the right amount of leftovers for us to nibble on days after the party. After doing some price shopping, we ended up getting the food catered from Safeway, the cupcakes from Whole Foods and the smash cake from our favorite local bakery, Sweet Affair. All perfect choices, and I’d repeat the entire spread again if I had to do it all over. 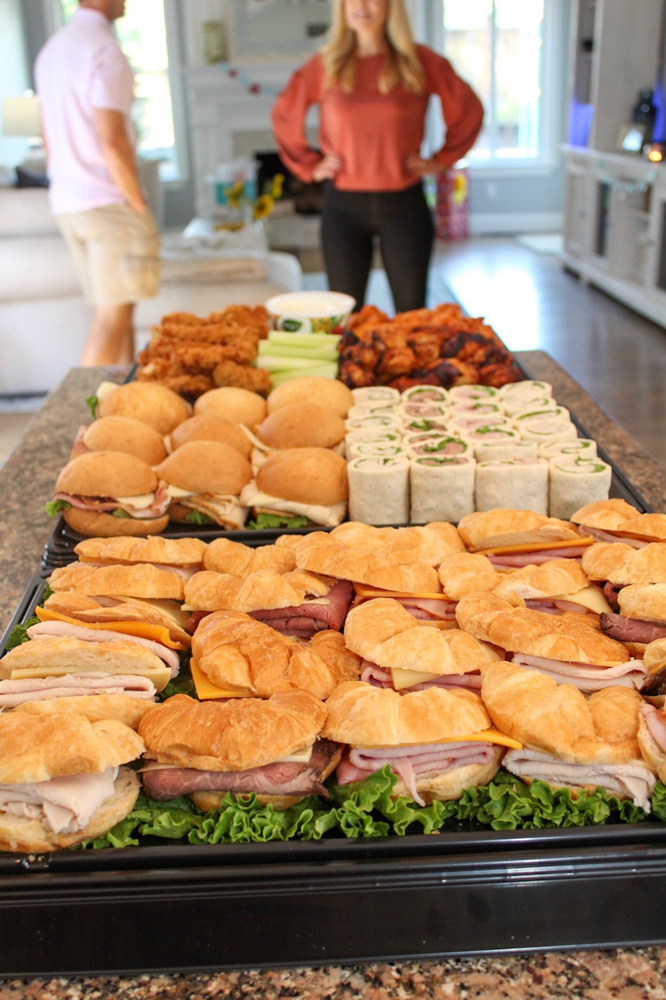 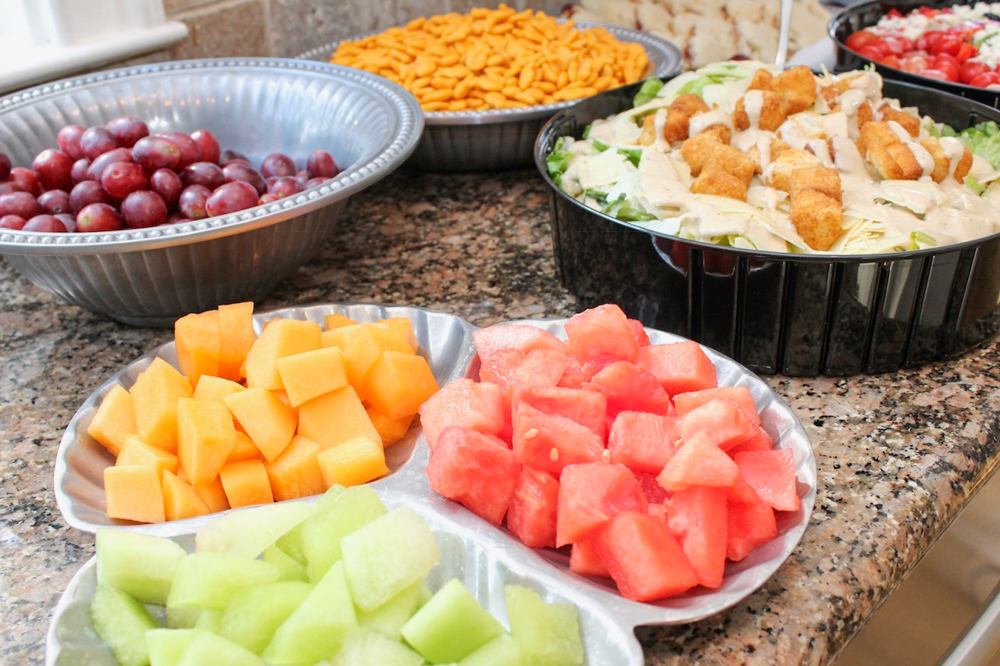 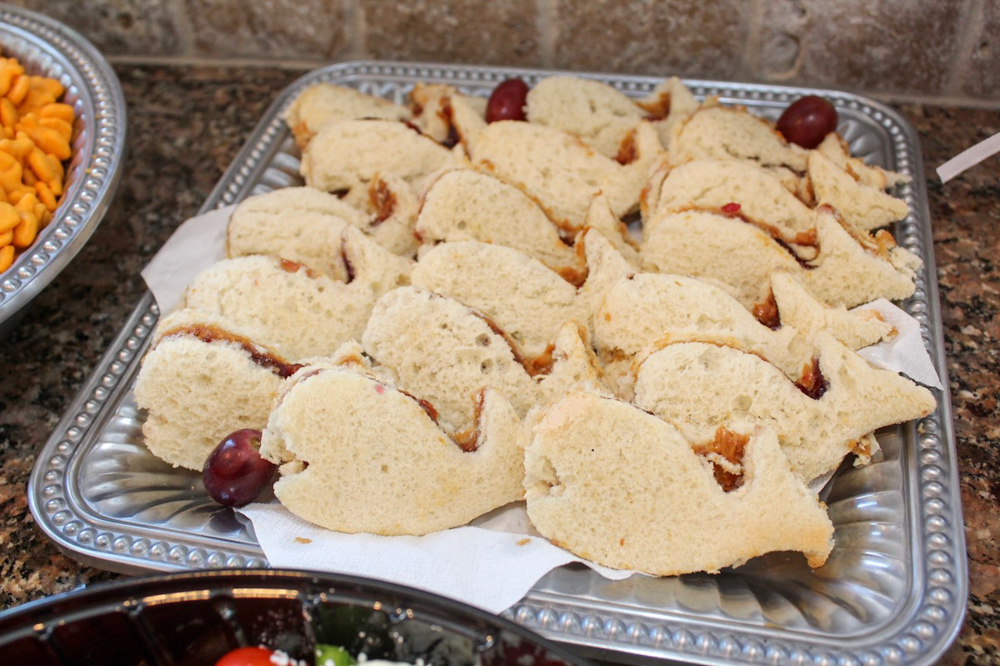 The most adorable hand-made decorations

As far as decorations, this is where I’m so darn lucky, because my brother’s beautiful wife, Stephanie, is incredibly crafty and she made all of the banners, cupcake toppers, high-chair sign and nautical cut-out garlands for the house. I hadn’t seen any of what she made ahead of time and my jaw literally dropped when she pulled everything she had created out of her suitcase upon their arrival, because it was all so perfect and so well done too.

(Fun fact, I’ve left up some of the nautical garlands and don’t have any plans to take them down … they match our house and are so happy and festive, they just make me smile when I look at them.) 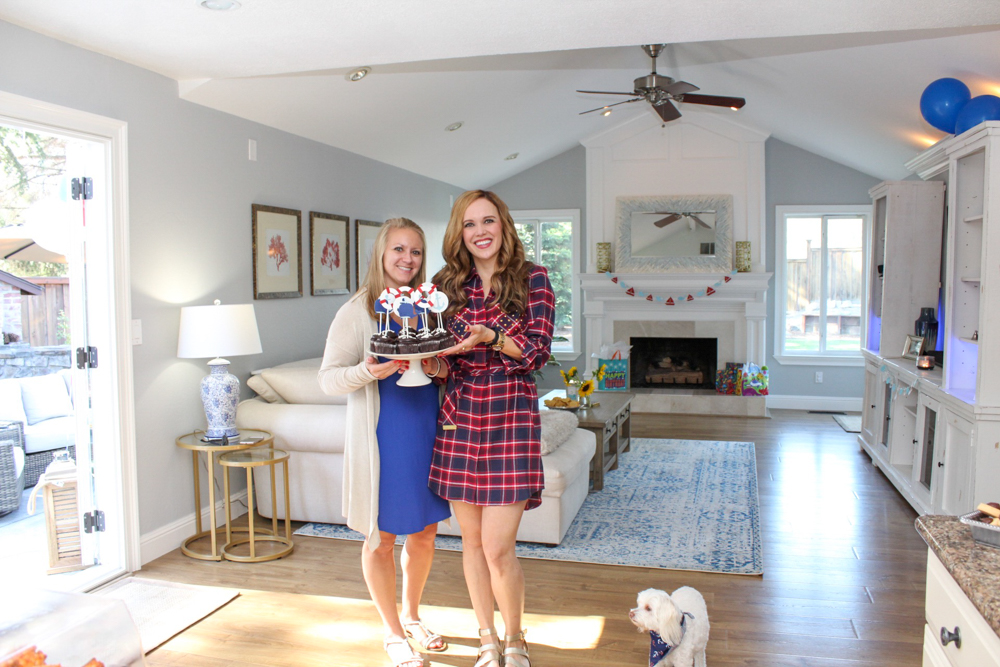 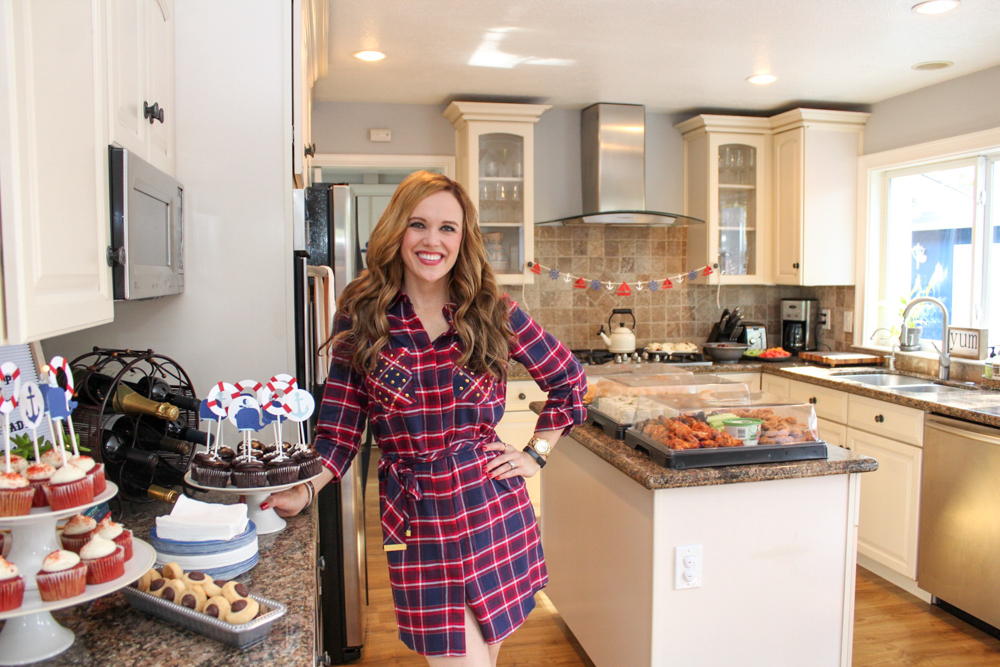 With my mom, brother (Matthew) and Stephanie around, we had a lot of hands to help prepare for, set up and clean up from the party, so it was pretty stress-free, which is awesome. In fact, we even got a babysitter the night before and all went out to a long, fun group dinner just because we had done so much party prep and knew there wasn’t a ton left for the morning of the party.

The party began at 11 a.m., and we had a full house of guests by 11:30 a.m. People had beer and mimosas, chips and dip and played corn-hole or chatted, enjoying the fresh air and breeze blowing through our backyard. 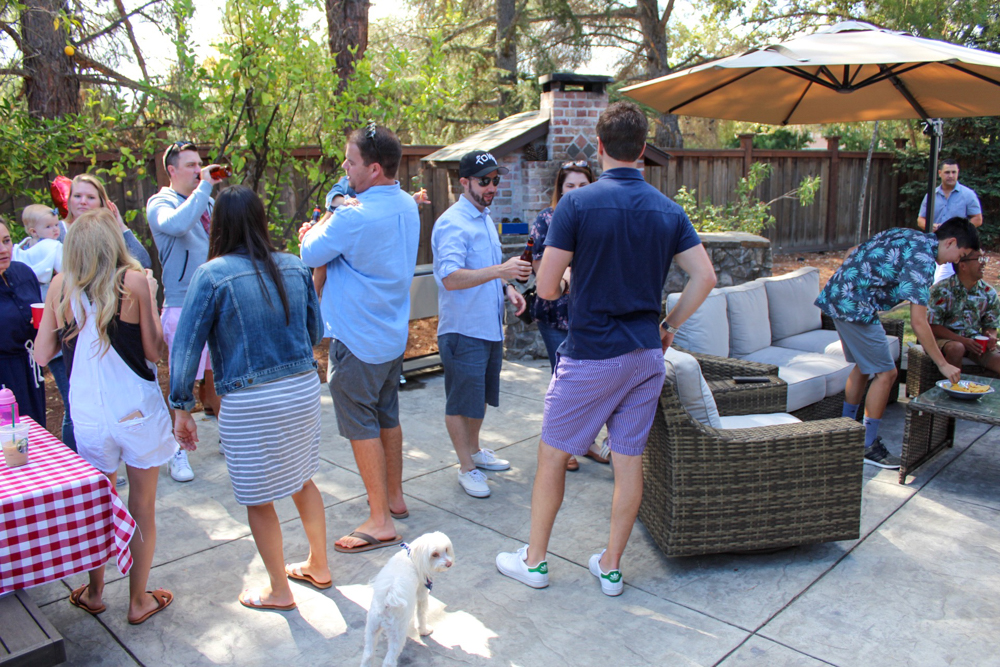 It was awesome to finally introduce Matthew and Stephanie to so many of our friends out here, as well as my lovely cousin, Karen, who came with her family from Mendocino for the party. My mom had met many of our friends before on previous visits and she enjoyed seeing them again. Dave’s little sister, Gwena, and his cousin, Nicole, were there too, and they are the sweetest and hadn’t seen my family in forever so it was like a big reunion. Yay! 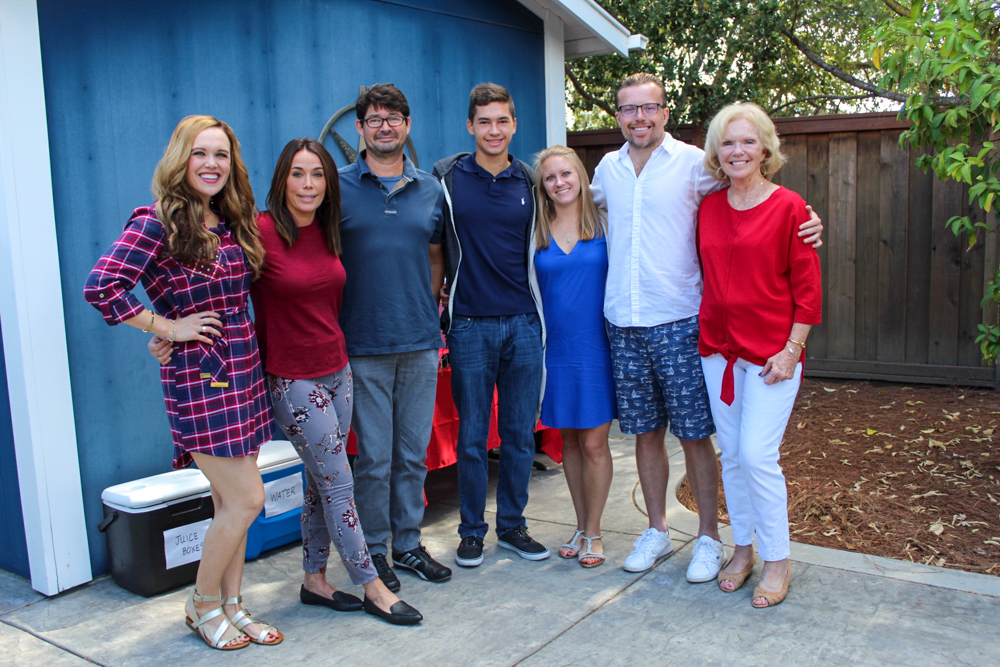 Because we didn’t want him to get too tired, around noon, we pulled out the little blue smash cake, gathered the guests and sang happy birthday to sweet Brady man in his decorated high chair. His cake was really tiny and had whip cream frosting and strawberries on the inside. Mmmmm. 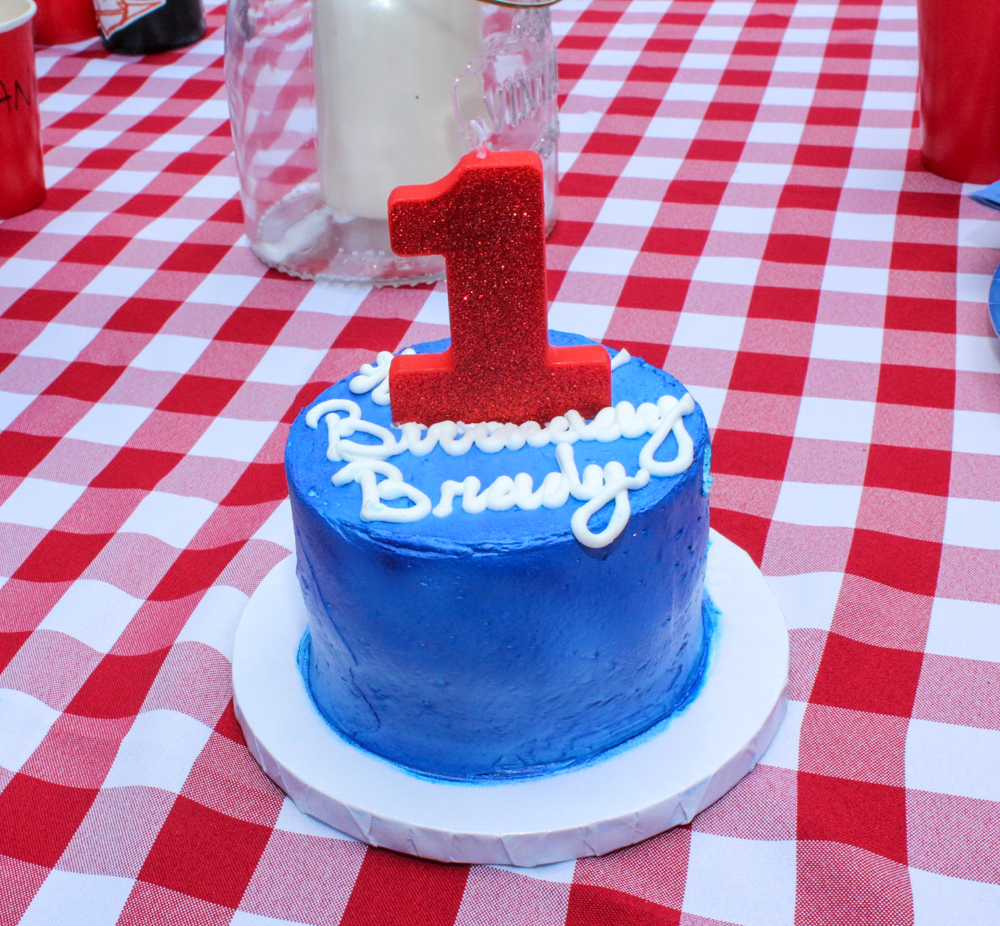 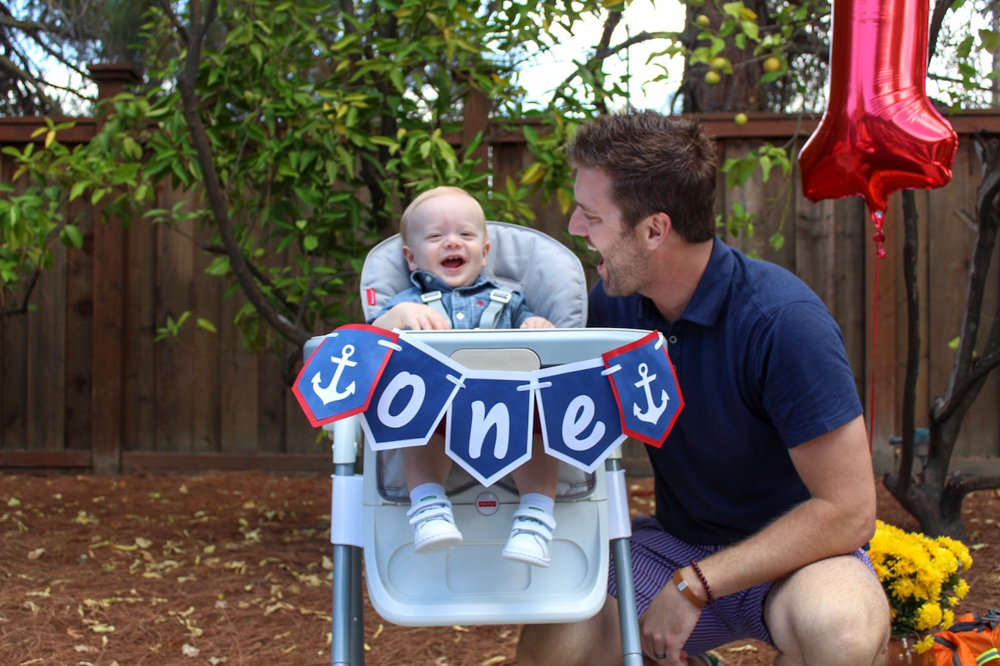 This was the highlight of the party for me, because it ended up being really emotional for me. Unexpectedly, as the group was singing to our little guy, I got choked up and shed a couple of tears. My face was pointing toward Brady and away from the group, so I don’t think it was super obvious, but it was almost funny, because I was pretty shocked it happened. (Not sure why, I tend to cry at strange times, but not during expected times — and apparently my mom felt herself crying at the same moment too.) 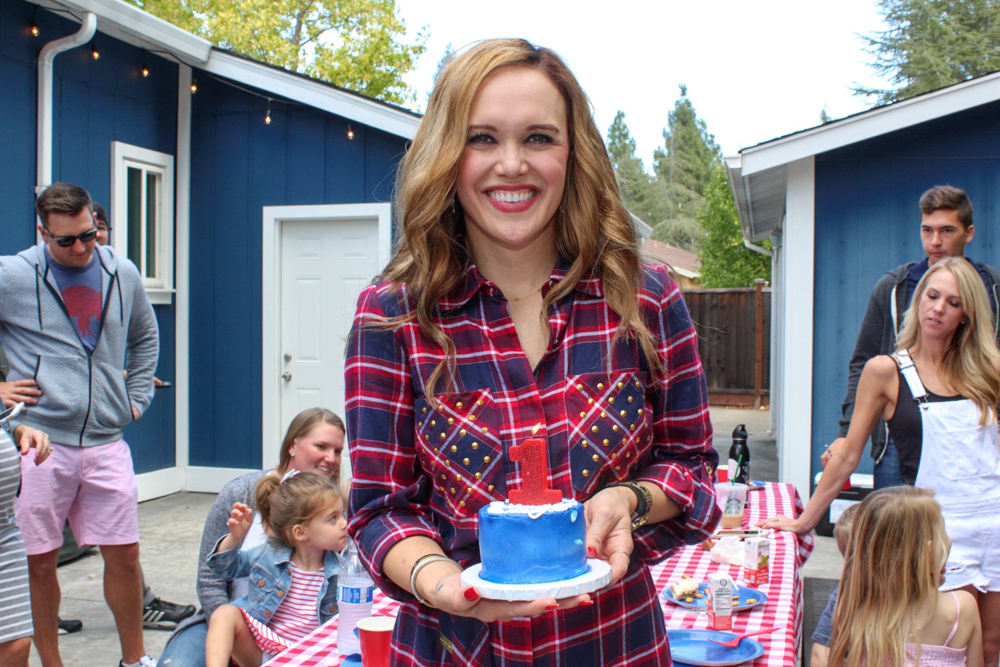 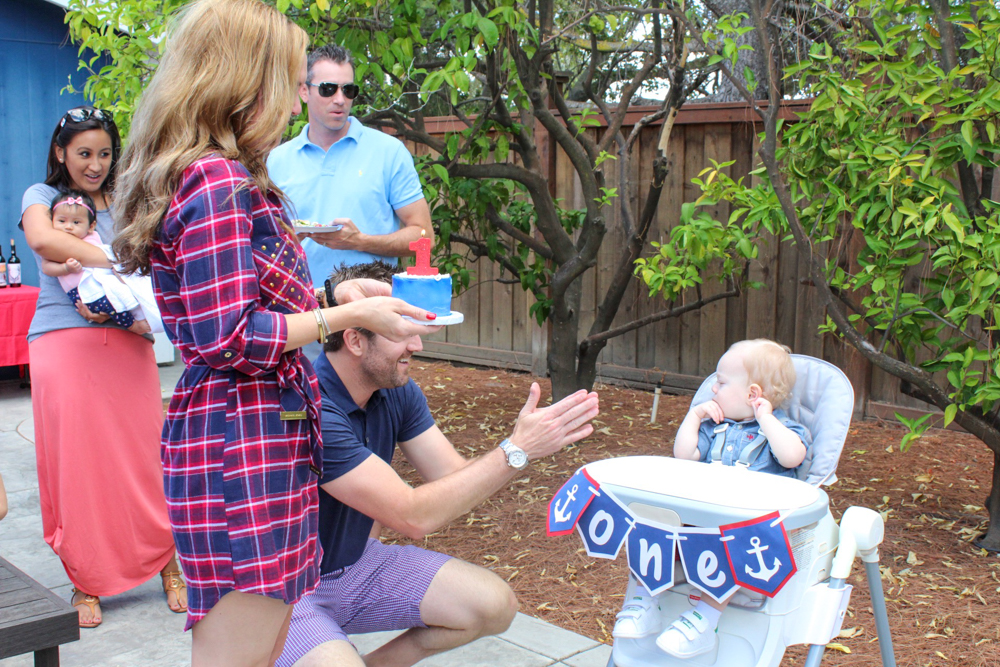 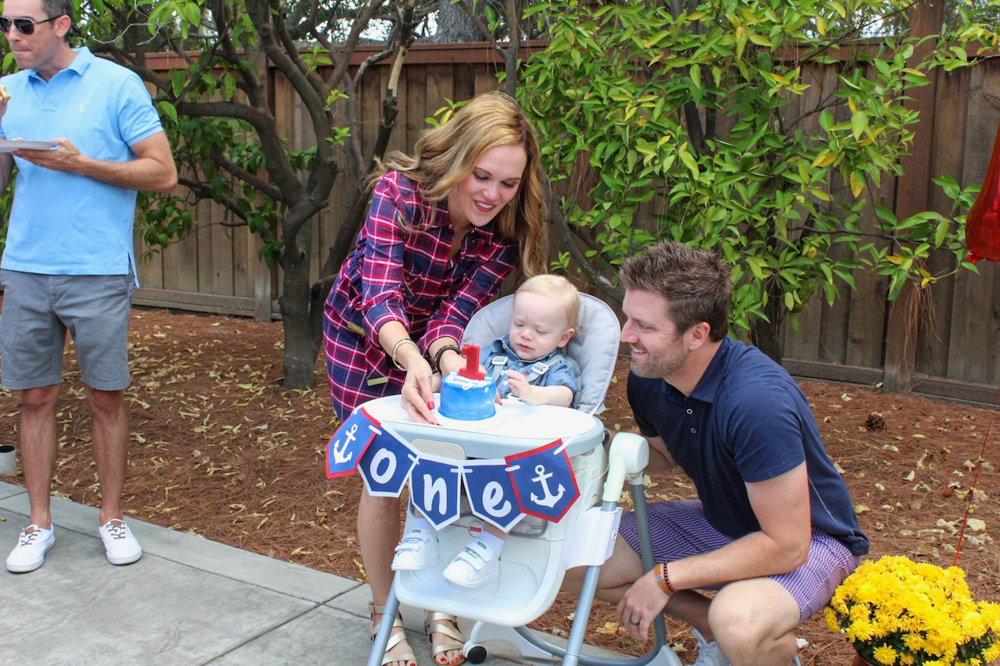 I guess I have a lot of feelings about my little baby growing up, and those all started to come up once we began singing happy birthday to him that day, circled by so many of the great people in our lives who have all seen him grow up this past year. And seen us grow up too!

Brady did pretty well with his smash cake and after a slow start, totally terrorized it. He got it on his face, all over his hands and even in his mouth and really seemed to love it. He sort’ve looked at us confused as to why he was allowed to make such a mess hehehe. We let him play with the cake for a while, before stripping him down out of his party outfit. Then, he went around to say his goodbyes to his guests, and I got him down for his nap. He was partied out for sure. 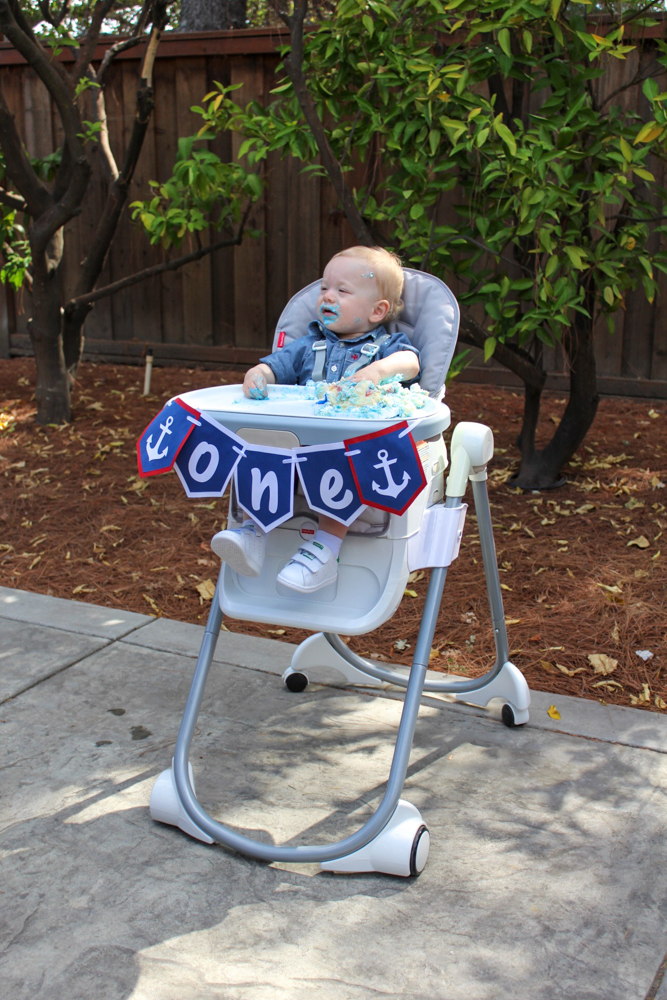 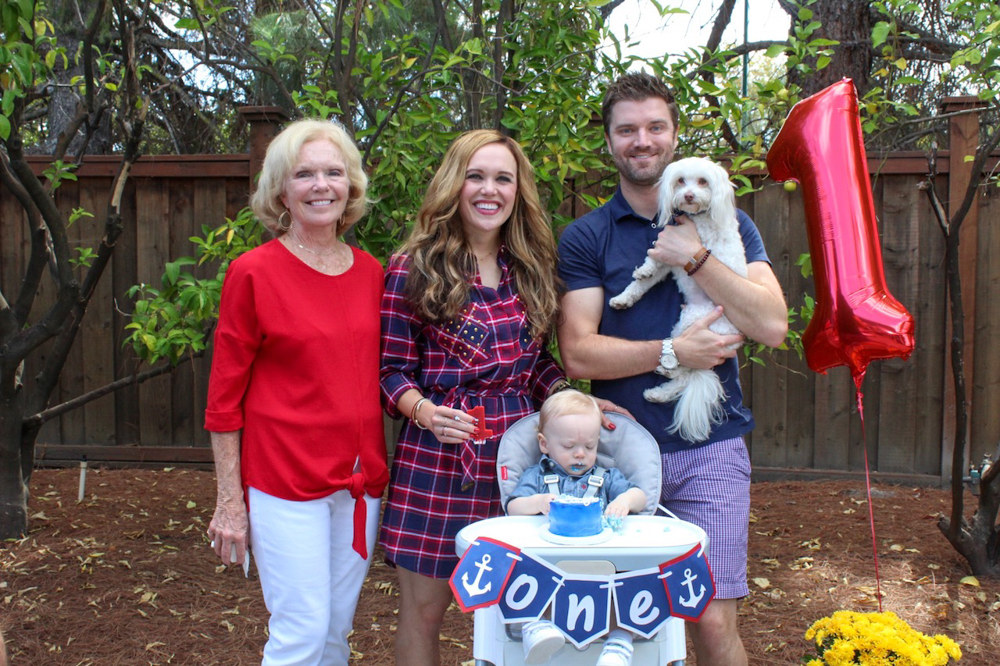 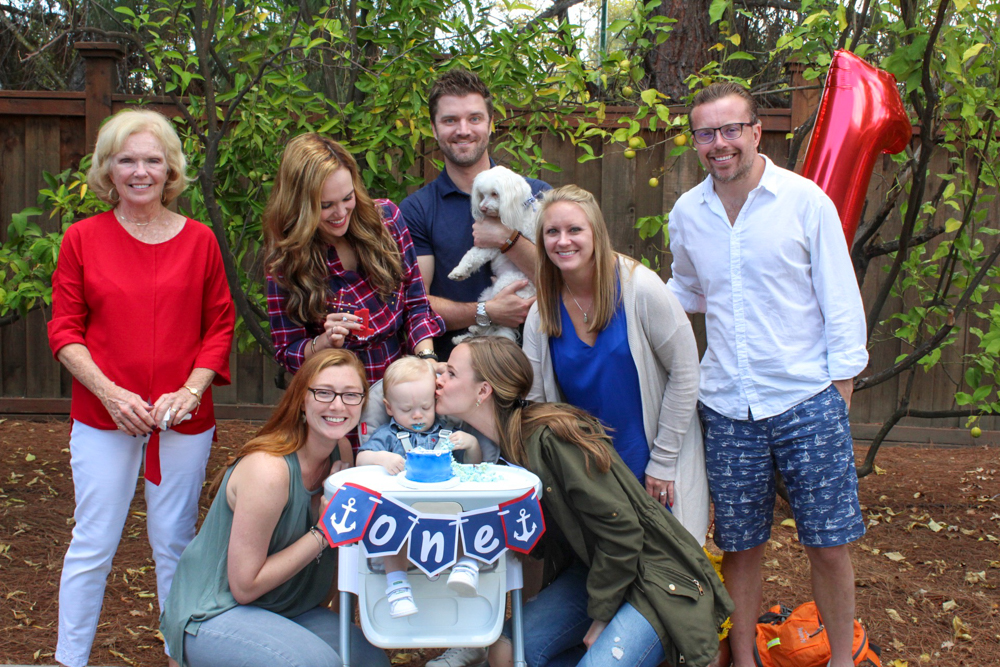 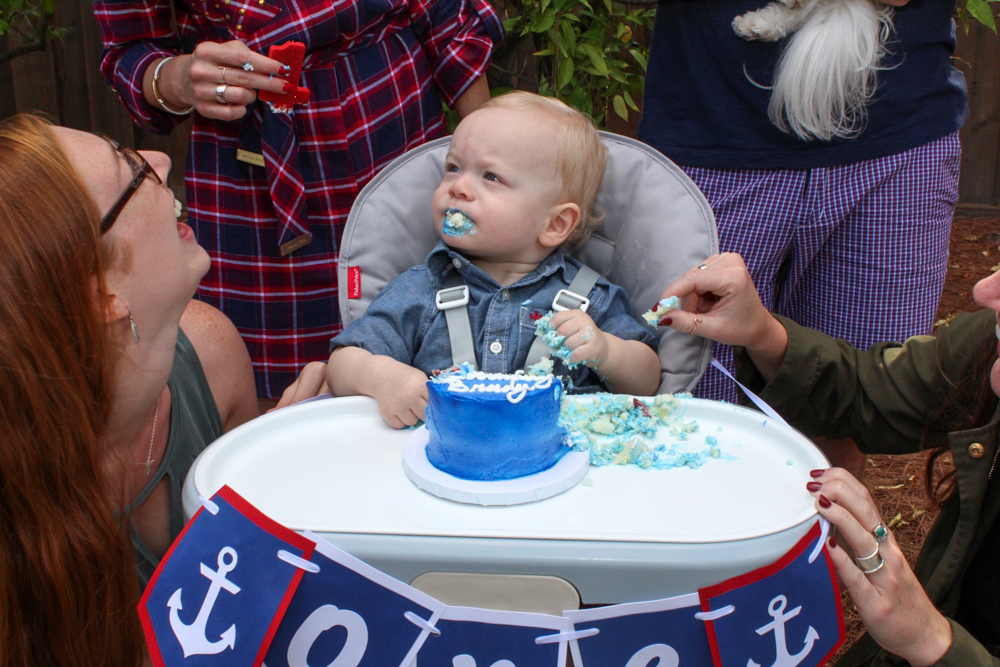 Eating and hanging out with friends and family

After Brady was sleeping, I poured a mimosa, got a plate of food and sat around enjoying our guests for the rest of the afternoon. It was sooo nice to see everyone and even see some of our groups co-mingling.

Once the guests left and we had everything cleaned up, we opened up Brady’s gifts, with his help of course, once he was up from his nap. We were blown away by all the fun toys he got. Lots of boy stuff like trucks, bikes, puzzles and dinosaur books and some clothes too.

One of my mommy friends told me ahead of time to only give Brady one new toy every few days or so, and we’re definitely taking that advice and have all the toys stored in the closet, outside of the some soft blocks, which he is already crazy about. However, quite frankly, he seemed to like the gift bags and wrapping paper more than the actual gifts upon first glance. Oh babiesss. 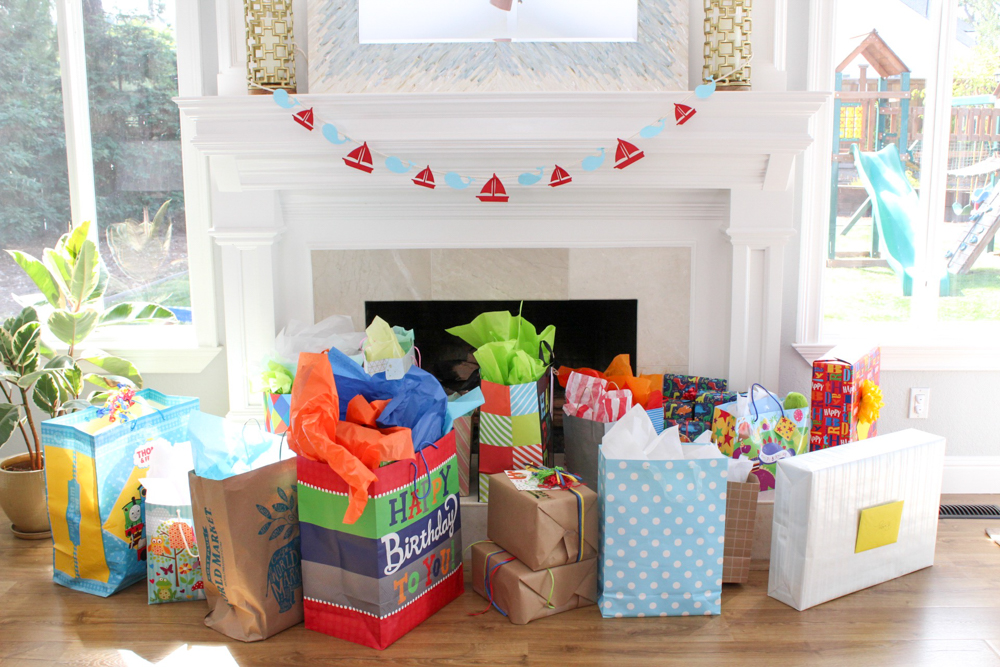 And that was the party!

As Dave and I were putting Brady down to sleep that evening, we both sort’ve sighed a sigh of relief to be done hosting and planning, but also a sigh of amazement that he’s now a year. We spent a good portion of the evening looking back at pictures of Brady growing up this year, and ohhhh my, it was a walk down memory lane. (So many more details on this subject in Brady’s one-year update.) 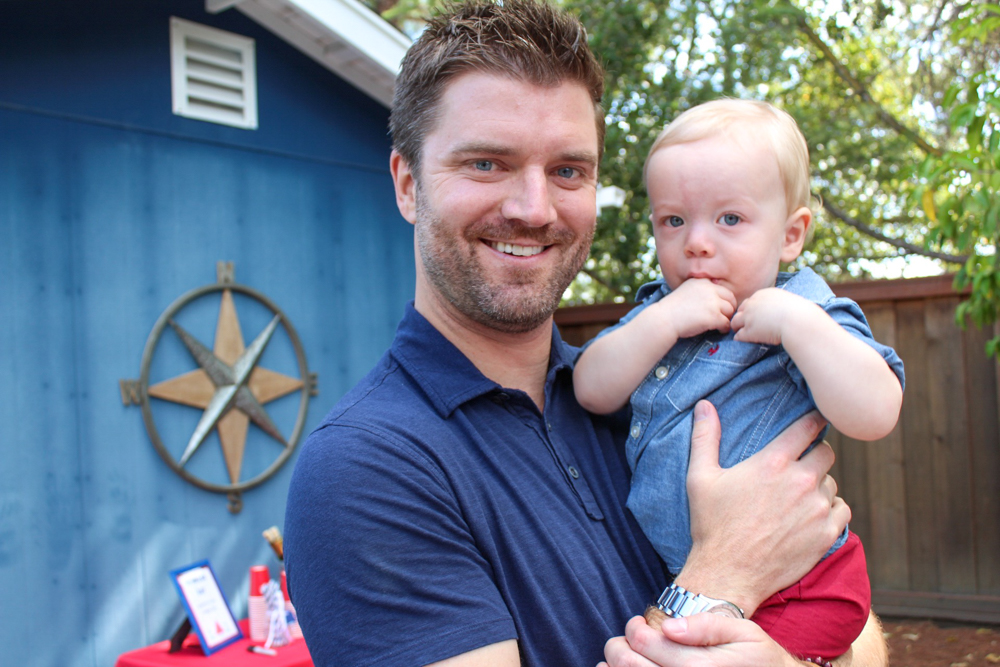 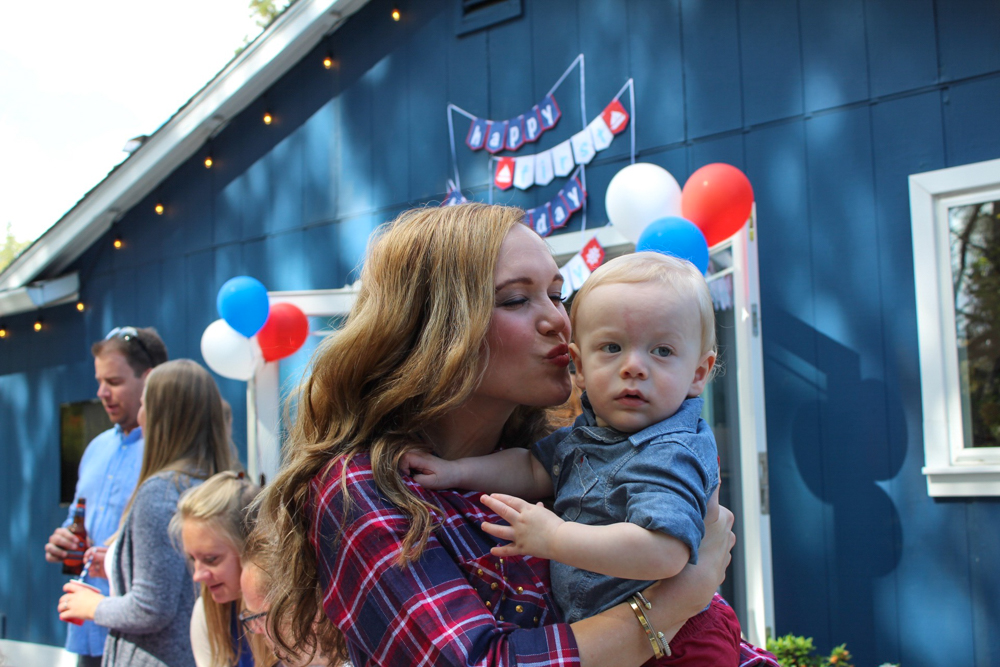 Overall, the birthday party was exactly what we had hoped for. The weather was great, we got to make use of our new home, we had a mixture of family and friends (especially my momma, Matthew and Stephanie, who all made the big trip from the East Coast), and we celebrated a full year of being parents to one special little dude.

I had been told by some friends that celebrating your baby’s birthday is more fun than celebrating your own, and I totally believe that to be true! So fun! So special! And now Brady is officially o-n-e! It’s still shocking to me to type or say that out loud.

Thank you so much for reading, my friends! See you back here on the blog later this week for some fitness, food and more. Have an awesome day!

How many toys is too many toys?