It’s been one month since Dave and I moved into our new place. After more than two years of living in incredibly small apartments in downtown San Francisco, we’re absolutely loving our newer and bigger spot outside the City in the East Bay. While at first I thought I would miss being right in the middle of the hustle and bustle that comes with urban dwelling, I’ve quickly come to realize that comfort and quiet is more important. Now that I have a car and don’t have to walk everywhere, life seems a little less stressful. Grocery shopping is easy, everything I need is a quick drive away, and yet we can still get to a sushi restaurant on foot in less than 10 minutes, oh and we have more than one closet. So basically, it’s perfect.

Soon after getting settled in our new place, Dave and I knew we wanted to throw a little housewarming, since we finally live in a place large enough to entertain. 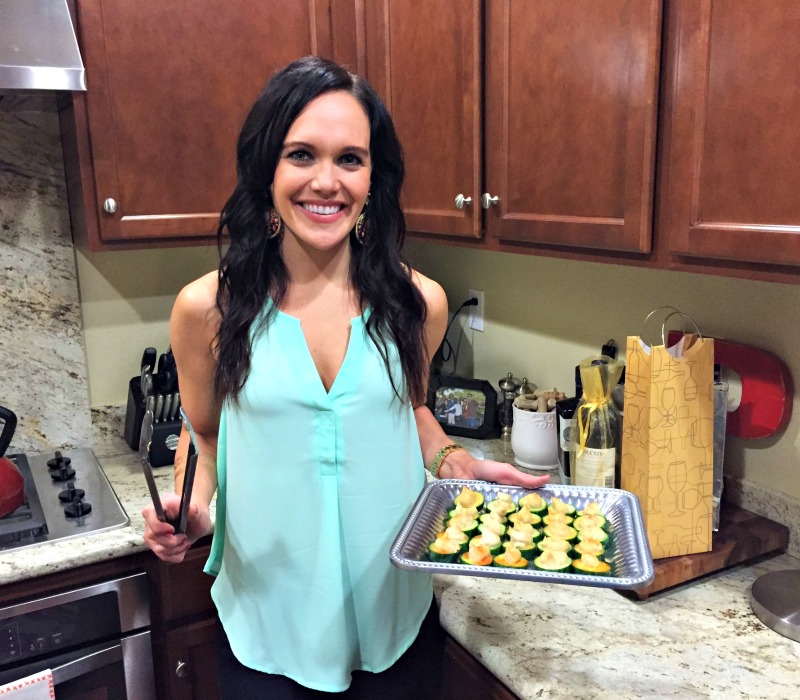 I love to host! And I also love to use my silver serving platters, which Dave and I received for wedding gifts nearly three years ago.

A couple of weeks ago, we sent out an evite to some of our friends and were very surprised and elated to have nearly 30 people RSVP “yes.” In the end, we had 26 people total who showed up for the Pitt “Suburban Soiree” gathering this past weekend. So it was a full house.

On Saturday, at 5:30 p.m. the guests began to arrive. (My college girlfriend Chelsea stayed in town for an extra night after her work event, the lovely wine-tasting, which Dave and I attended the night before, so it worked out perfectly that she could also come to our party. She came a little bit before the group to hang out and help set up.)

As people showed up, we welcomed them upstairs into the main living area where we had some party tunes playing on Spotify, a slideshow of some of our crazy adventures playing on the flat-screen TV and an array of food and drinks. We sent out a map of the area a couple days in advance, letting people know that the front door of our place actually opens to a courtyard and luckily nobody got lost or confused. Dave even drew some stars on the sidewalks leading up to our door to help people find their way.

The guest-list was pretty diverse, and the attendees included some of our friends who live in San Francisco, some of Dave’s coworkers who live all over the Bay Area, and other people we’ve become close with during the last two-and-a-half years living in California. It’s times like those when you have all of your friends over that you can truly appreciate the value of friendships made, because it certainly helps you feel like you’ve set some roots down in your “newish” city. It was even more enjoyable to see our friends from different groups get to know each other over the course of the night. Good people like other good people, that’s for sure. 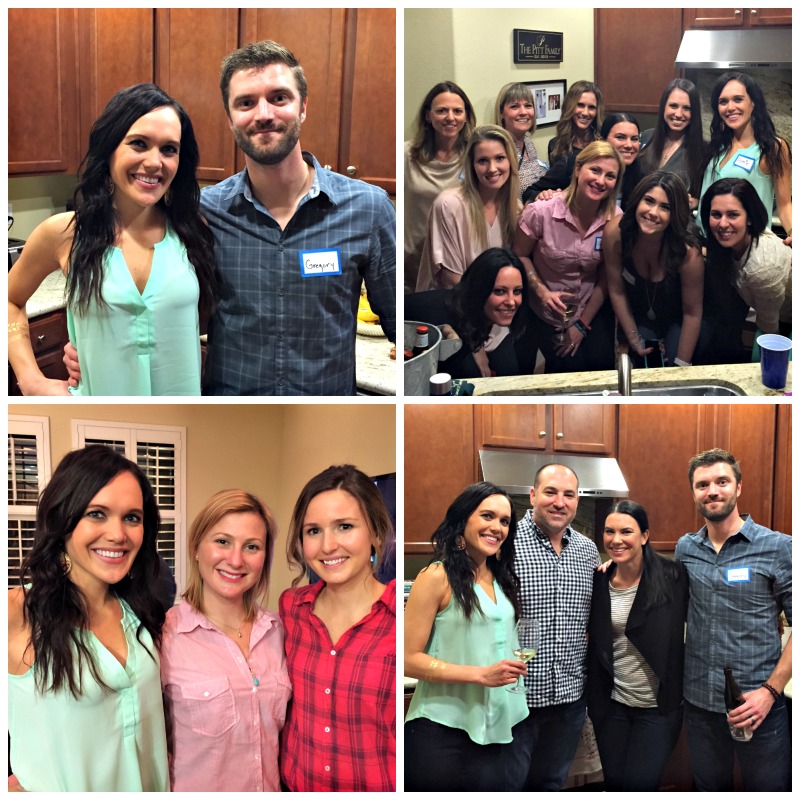 A look at some of the friendly faces who joined us for the party, including a group shot of some of the ladies in the kitchen, me with Chelsea and Sarah, and our dear city friends Mike and Laurene.

So many of our friends brought us bottles of wine as gifts, and we even received some gourmet popcorn, a bouquet of flowers and a potted plant. I was super excited to find a place for the plant, and with the addition of live greenery, we can certainly call our place a true home. Now let’s get to some of the party logistics …

The details on the party food

I made all of the food for the party, focusing my efforts on bite-sized delights that would please a large group. Some items had a healthy twist, but most of it was purely delicious party food, prepared without regard to the calories. Because let’s face it, calories consumed at parties don’t count. Right? 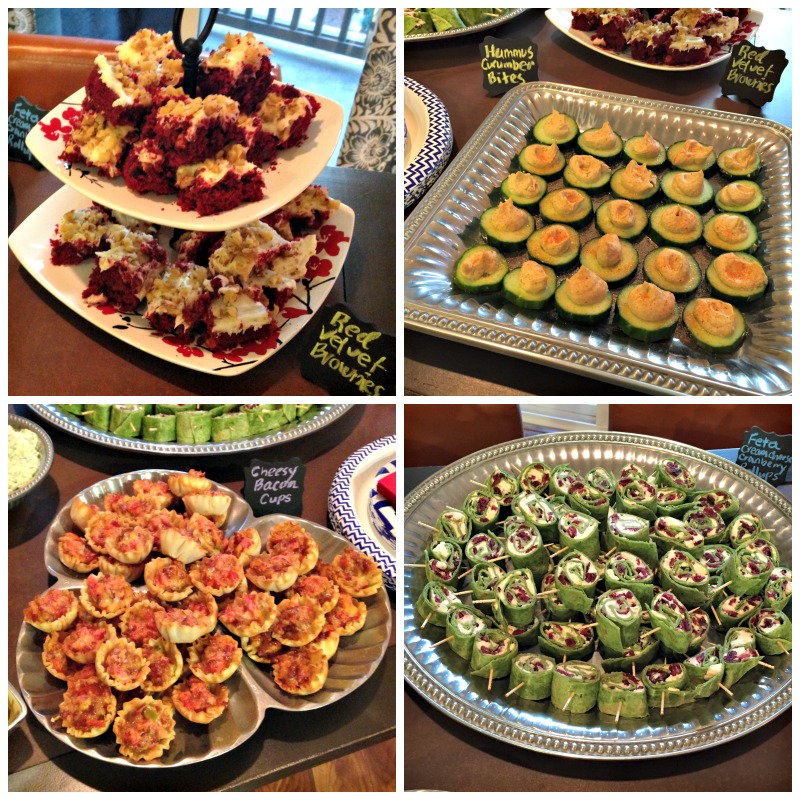 Bite-sized treats shown above include nearly all the colors of the rainbow.

Here are the recipes I made and/or assembled, some of which I modified slightly:

I prepared the desserts on Friday, as well as prepped the chopped-up veggies. The rest of the food I made on Saturday in the day and finished everything right before it was go-time. I was the queen of lists leading up to the party. I assembled my recipes via Pinterest, made shopping lists, went to several grocery stores more than once, wrote out instructions for each dish and then conquered each one-by-one. I’d say it turned out pretty good, and the stand-out crowd pleasers were of course, the meatballs and the cheesy bacon bites. 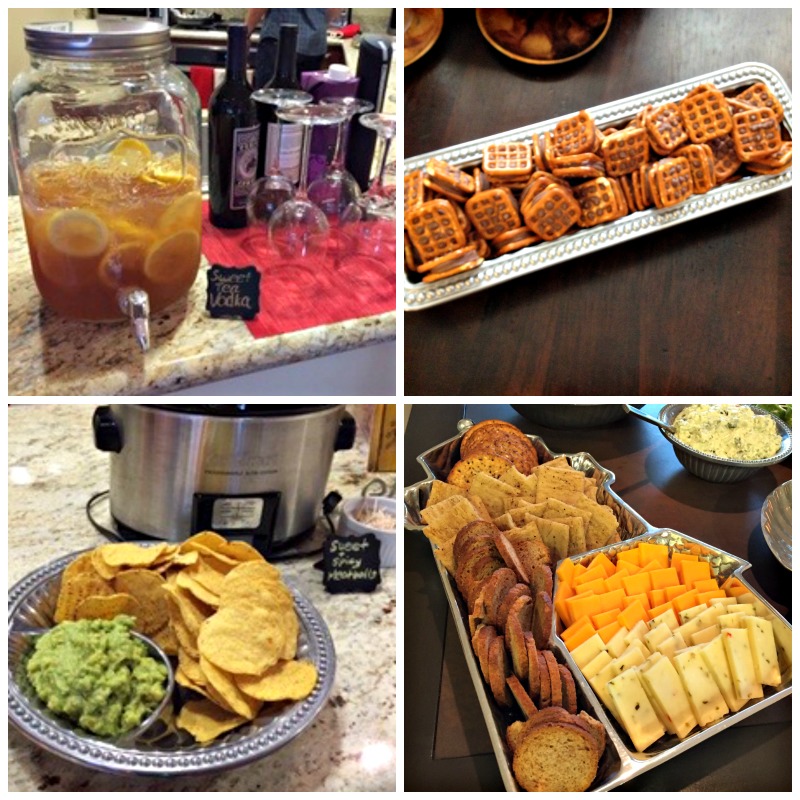 A selection of goodness including a cocktail served in a large mason jar, various food and drinks.

And for the beverages, Dave and I provided a variety of beer, wine, bubbly and spirits, including a specialty cocktail, which we made — Sweet tea vodka lemonade. Most people also brought a little bit of beer and wine to share as well, which was a good thing, because the party went on until nearly 11 p.m. so we needed the extras!

The details on the party entertainment

Outside of hanging out with our guests, nibbling and drinking, we also had a few activities planned. In the garage, Dave has set up a “speakeasy lounge” featuring music, beer pong tables, flip-cup tables, a sidewalk chalk graffiti station and more. This was not just a man cave, and many of the girls hung out down there as the night went on. However, Dave didn’t introduce the lounge concept until a couple hours into the party, to make sure we didn’t create a segregated girls and guys environment too early on in the night (because you know most girls tend to stay in the kitchen, which was true for our party too). Unfortunately, it was way too dark to capture any photos worth sharing of the garage set-up, so you’ll have to use your imagination there. 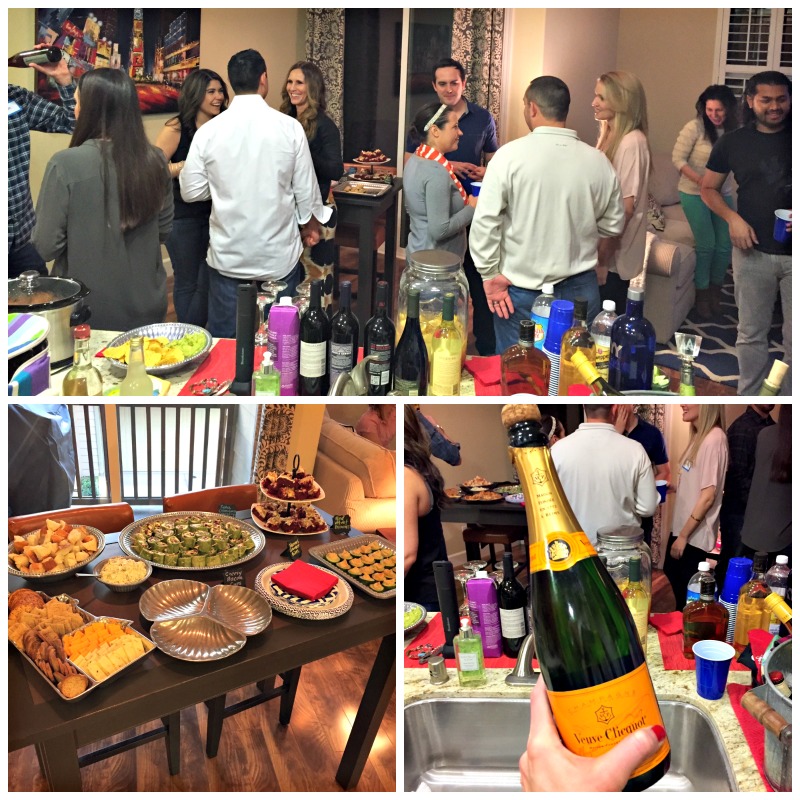 A shot from the kitchen looking out at all of the guests socializing, as well as the food table before party time and a fancy bottle of champagne, brought as a celebratory toast from some lovely friends.

We also had some fun taking blurry and ridiculous photos using a selfie-stick. And finally, we got into a late-night game of Cards Against Humanity (one of my favorites from Friday) with a group of about 10 people who stayed until the end, which was a fabulous time, full of laughter. It was at this point that the munchies set in and our group finished off nearly all of the remaining food.

Filling the house with warmth

After everyone left, Dave and I were completely exhausted, but so happy with the turn-out. We decided to leave the mess and went to bed. It took quite a while to clean up on Sunday, but we had our place back in business by noon, which really wasn’t too bad.

Hosting parties is not only a lot of work, but it’s also pretty expensive when you have a big group. It’s something that Dave and I did a lot more when we lived in Florida, and I’d love to get back into it. In the end, it was worth every little bit of effort to welcome all of our friends, who live all across the Bay Area into our home to hang out. The term “housewarming” is totally effective to describe how it felt. Our place is broken in, warmed up and serving as a fabulous place for us right now. We’re pretty darn happy we got to see so many of our friends and show them our new pad, as well as have a little carefree fun on a Saturday night.

So there you have it! Tonight, Dave and I are attending a fashion event in Union Square, and I’ll be back here with you tomorrow for a post about food. Happy Tuesday, friends!

When was the last time you went to a good party? What’s your favorite game to play at parties? What’s something you are looking forward to this month?