This past weekend was a very good one. Dave and I traveled down to San Diego to visit his parents, and we even brought our little Rudy pup along for the trip. I have so much to share about this fabulous getaway, but let’s start with the highlights …

Now, let’s get to a little recap of the happenings …

On Friday morning, after teaching BODYATTACK, I showered up and zipped up my suitcase, then Dave, Rudy and I headed to the Oakland airport for our lunch-time flight. We got there plenty early in order to get Rudy checked in, and the process of traveling with a pet was a breeze — although he was pretty shaky for much of it. The flight was quick, and in just over-an-hour, we had landed at the small San Diego airport. 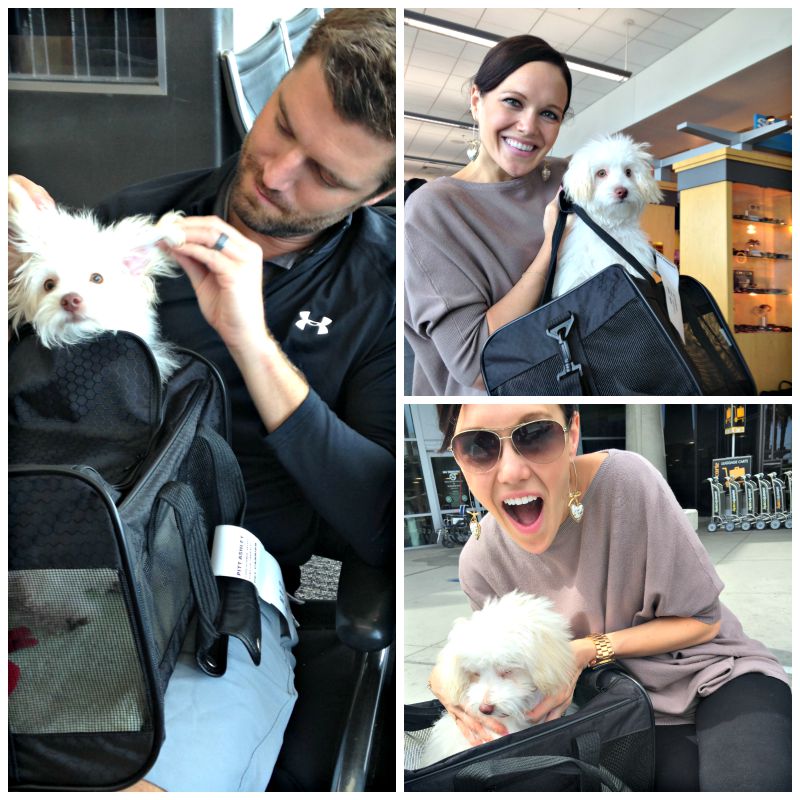 By the way, your in-cabin pet is supposed to stay under the seat in front of you for the duration of the flight, but we may or may not have let Rudy stick his little head out and up when he needed it. And at one point, he was on my lap in his carrier, and the flight attendant made me put him back down. After she did that, another flight attendant came by and said she wished that Rudy could stay out, because he was so darn cute. I agree. Needless to say, numerous people approached us to pet Rudy at the airport on the way there and back.

Dave’s Mom picked us up from the airport, and we crawled through some bad traffic on the way home to Coronado. We had never been to his parents’ new place in the Cays area, where they’ve been for a few months, and it was just gorgeous. They are on the water and have a lot more space than their last home, which was closer to downtown Coronado. 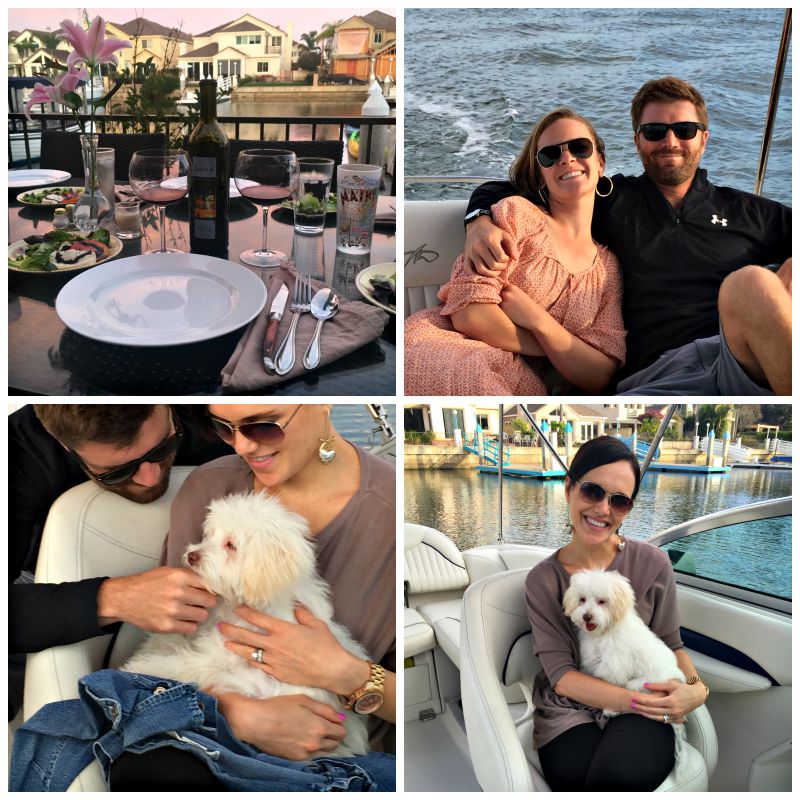 That evening, we took a boat ride on the water behind his parents’ house with the family and then enjoyed a nice dinner outside on the deck.

The gym, the pool and some pampering on Saturday

On Saturday morning, Dave, Rudy and I swung by Panera to pick up breakfast. Once breakfast was complete, Dave’s little sister, Gwena, and I rode bikes to the nearby hotel gym to complete this hotel-gym workout together. I showed Gwena some new exercises, and we had fun sweating and talking. By the way, Gwena is a Zumba instructor, and was totally jealous of my experience meeting Beto and taking a class from him at IDEA BlogFest with Sweat Pink in LA a few weeks ago. 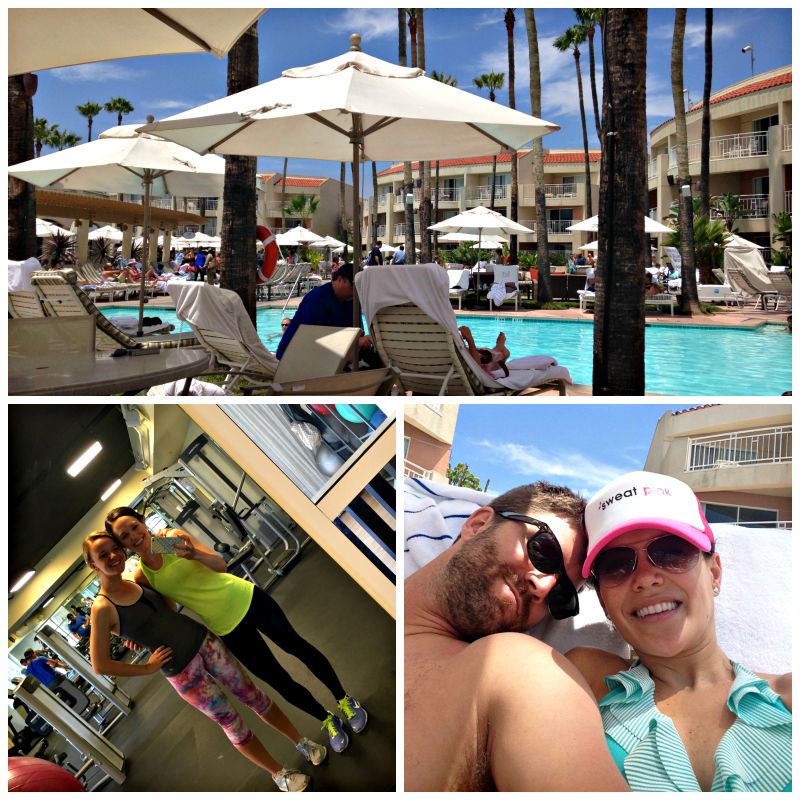 After spending about 45 minutes in the gym, we rode our bikes back home, put on our swimsuits and went back to the Loews Hotel again with the whole family to lay by the pool and have lunch. We got some sun, then Dave’s Mom, Gwena and I hit up the fancy spa to sit in the hot tub and shower. From there, we went to get manis and pedis at a brand new nail salon in downtown Coronado, while Dave and his Dad went on the boat. It was a great manicure and pedicure, full of some funny moments, like when my manicurist spilled numerous things on me throughout the course of my services. 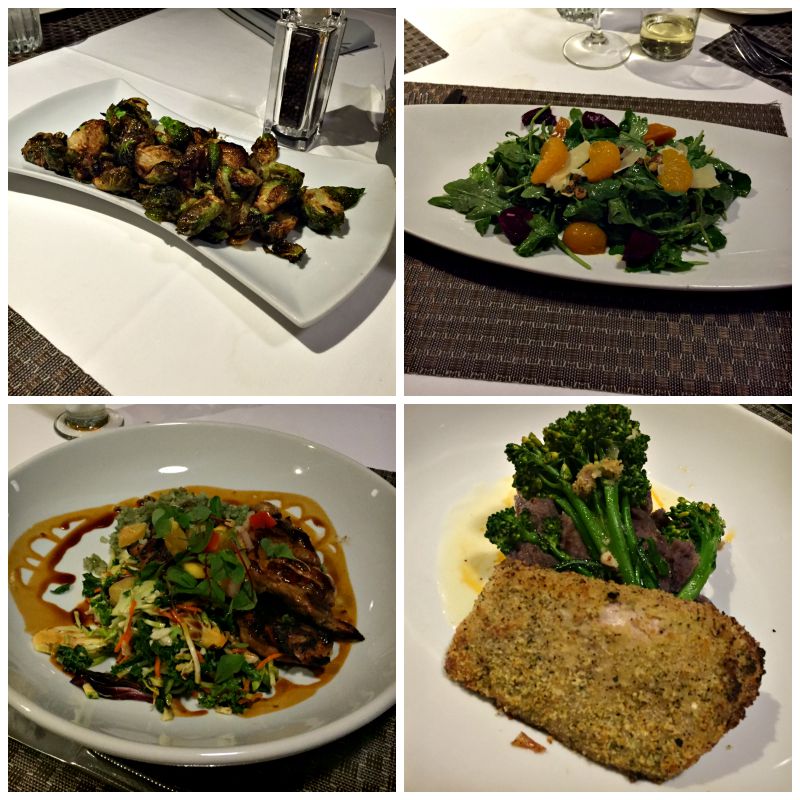 I loved the decor of the restaurant, and the food was great. Some highlights from our meals included the brussels sprouts appetizer, and the mashed purple sweet potato that came under my macadamia-crusted fish dish. Because the dessert selection wasn’t quite up my alley, we swung by Von’s for Ben & Jerry’s ice cream and a massive slice of carrot cake for us (me) to enjoy at home.

Kayaking and exploring San Diego and the beaches

On Sunday morning, Dave and I made another trip to Panera for breakfast. Then, we came back and took a little loop on the kayaks behind the house. The water was super calm, and it was a peaceful activity, in which we got to look at the back of many beautiful homes. I was totally content to stay inside, but Dave insisted we go on the kayaks, and I was so happy we did. It was a great way to start the day.

In the mid-morning, Dave, Gwena, Rudy and I loaded up in a convertible and went on a tour of San Diego with the top down. We drove through the Gaslamp Quarter, which is a trendy restaurant and bar strip in downtown San Diego. Then we went straight to Ocean Beach to Newbreak Coffee & Cafe, a place that Gwena swore had a great acai bowl. She knew I needed to eat a good one, because my last acai-bowl experience in San Diego in November was sub-par. Well Gwena’s recommendation came through. The three of us all got delicious and huge acai bowls and sat outside in the sunshine slurping them down — with Rudy on Dave’s lap, participating in all the action. 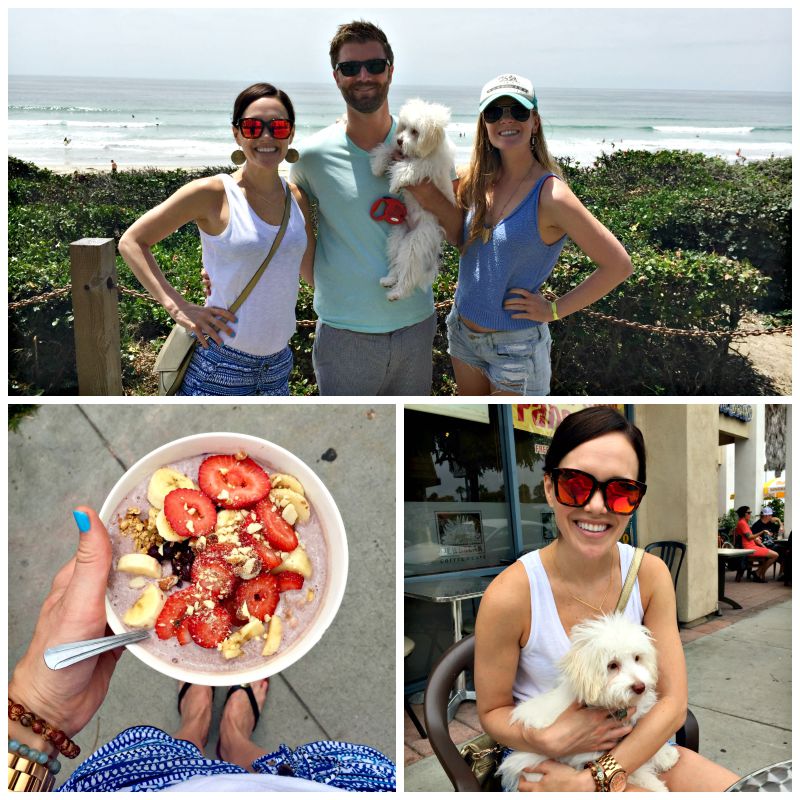 From there, we drove to Pacific Beach, parked the car and walked along the sidewalk just above the beach. We had planned to walk on the beach, but found out that dogs weren’t allowed during the day hours, so we had to stay off. Gwena thought we would like to see Pacific Beach, because it’s a totally casual and laid-back scene, with little huts, surfers and shops all crowding the coastline, and she was right.

That was our last stop on our adventure before heading to the grocery store for picnic supplies. And I must say, it was the perfect selection of San Diego spots. Gwena did an awesome job showing us some new areas, yet we barely scratched the surface of all there is to see in SD.

Sunday night concert in the park on Coronado

On Sunday night, the whole Pitt family loaded up and headed to downtown Coronado at Spreckels Park for the Coronado Promenade Concerts in the park, a free weekly event which takes place during the summer on the island. We packed some chairs, some cheese and crackers as well as some wine, and set up an area in the crowded park. I will say that this was by far my favorite time during our great weekend trip. The scene was wonderful. It was super family-friendly and everyone had elaborate picnic set-ups. 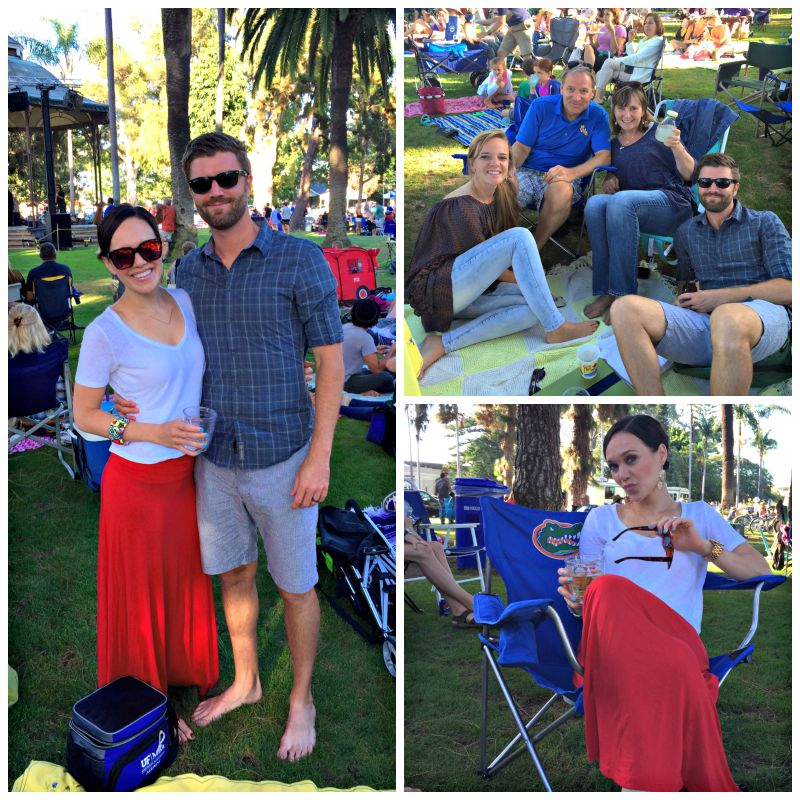 The musicians of the night made up a live jazz band, Louie Cruz Beltran, who were total crowd-pleasers and played a lot of Latin music. At one point, there was a salsa instructor giving lessons, so of course, Gwena and I joined in. Toward the end of the concert, most people were dancing, and even Dave hopped up to take me for a swing on the grassy dance-floor.

After that, we went back to home for a final delicious grilled meal outdoors, which Dave cooked up for us. The weather was so gorgeous, and the sun was down as we were eating pretty late into the night. We had some dessert, and then called it a night shortly thereafter, totally fulfilled from our day of fun.

Heading back to the Bay Area on Monday morning

On Monday morning, Dave and I packed up our stuff, said our goodbyes to his Dad and little sister, and his Mom dropped us off at the airport. We arrived very early, super hungry and were a bit disappointed with the food selection in our terminal. We had to settle for breakfast at Einstein’s Bagels, which was not-so-good. But at least our flight was on-time and easy, and by the mid-afternoon Dave was back at his office, and I was heading home with Rudy to unpack, hit the grocery store and collect myself before heading to teach.

Overall, it was an awesome weekend. Not only did we enjoy a lot of quality time with Dave’s family, who I just love, but we also relaxed, ate good food, explored new areas and totally changed up our normal weekend routine with extra outdoor activities. I can’t wait to go back to San Diego, because it’s definitely a place I’d like to see more of. And that concert in the park on Sundays? Count me in! We need Walnut Creek to offer something like that near us each week, because I’d become a regular. Thanks for the fun, San Diego. We surely enjoyed the weekend and hope to see you again! 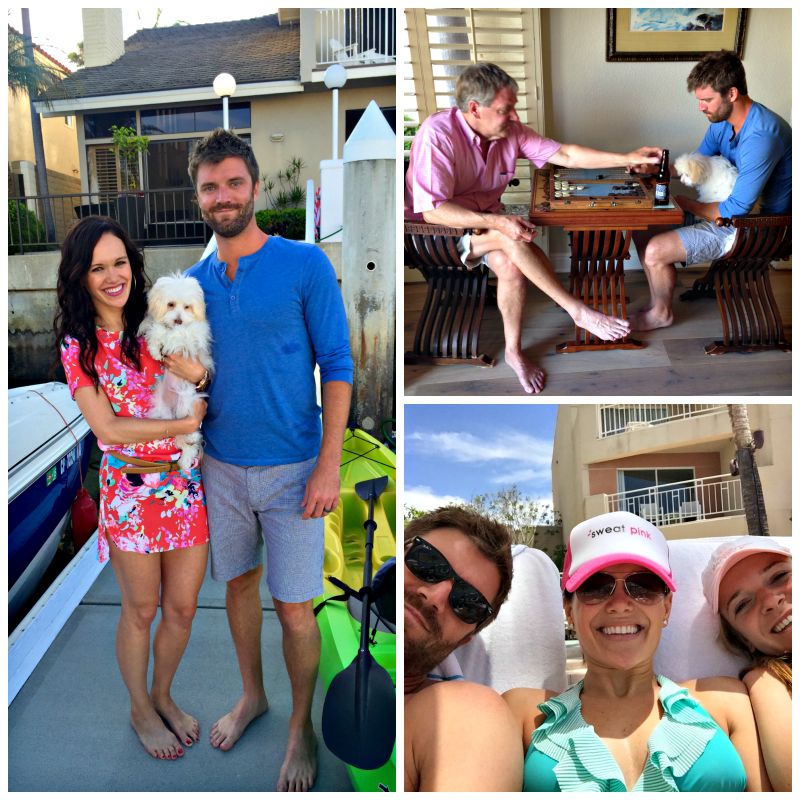 That’s the story. We’re back in the real world for just a few days before heading down to Monterey this weekend for a wedding. And the Hawaii countdown? We leave in 23 days! We don’t normally travel so much, but I’m totally loving the fact that this summer has included so many trips. Have a fabulous Tuesday, folks, and I’ll see you back here tomorrow to talk about food.

Do you travel with your pets?

Have you ever been to San Diego before?

What’s your favorite thing to do on vacation?