Hi, my friends! I hope you had a great weekend full of relaxation and fun. Mine was such a good one, and it was pretty eventful. I have some colorful pictures to share with you, so here we go …

Taylor Swift concert at Levi’s Stadium with the ladies

On Friday afternoon, I went down to Levi’s Stadium in Santa Clara, where the 49ers play, to see the Taylor Swift Reputation Tour with five of my girlfriends, who all happen to be mommas as well.

We were kicking off our Mother’s Day weekend together with a bang, and we called it our “mommas’ night out,” of course. 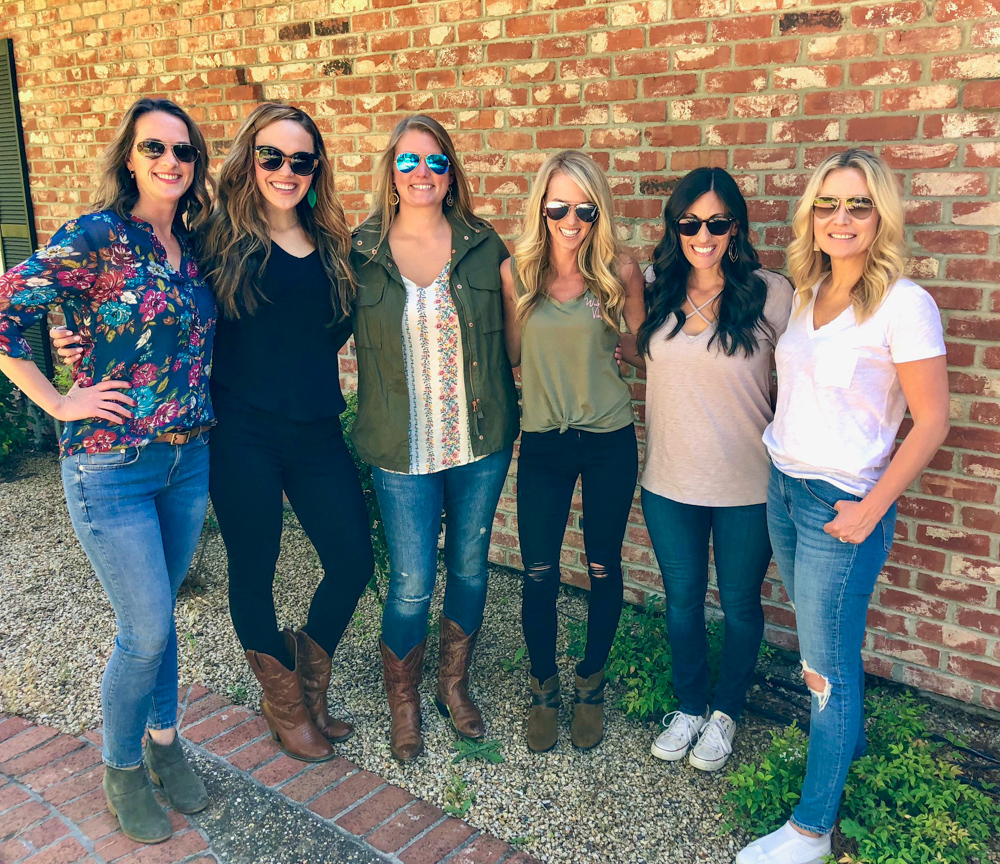 We rented a minivan so we could all fit in one car (so awesome — I mean those sliding doors are clutch), we brought Chipotle for dinner to enjoy on the road, and we had coolers full of plenty of adult beverages and snacks, including the most delicious cookies from Costco that I have to get my hands on again (they were chunky and decadent and Kirkland brand, and I think I had four — whoops).

We arrived at the concert venue early enough to tailgate for almost two hours before heading into the show, and those two hours were hilarious and so enjoyable and provided a great opportunity to wear my boots … 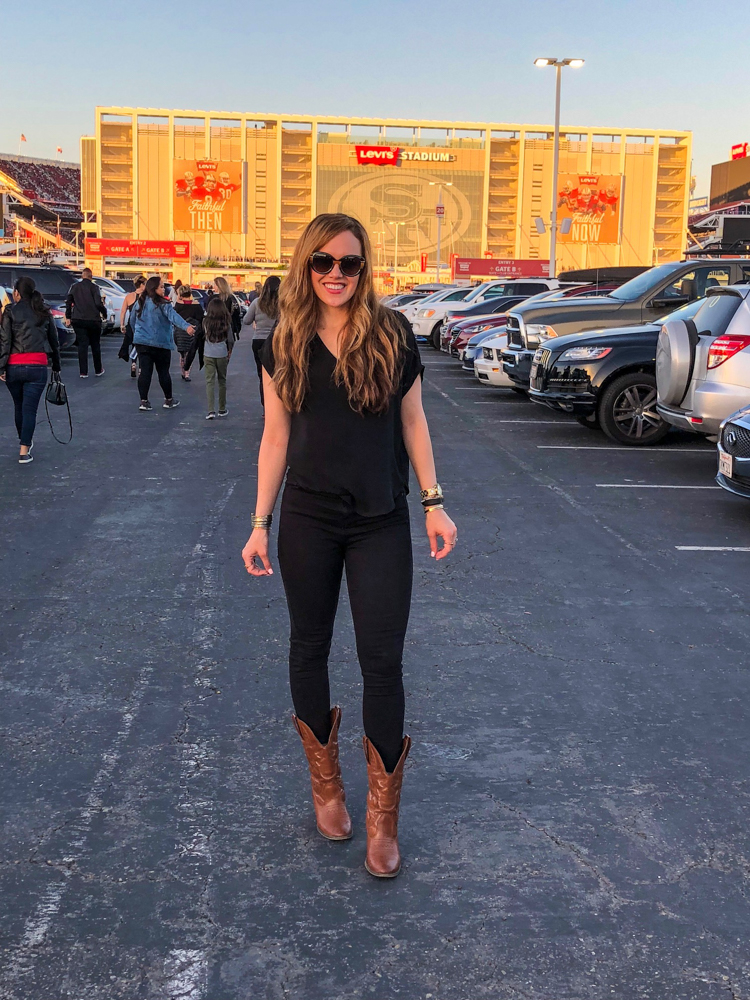 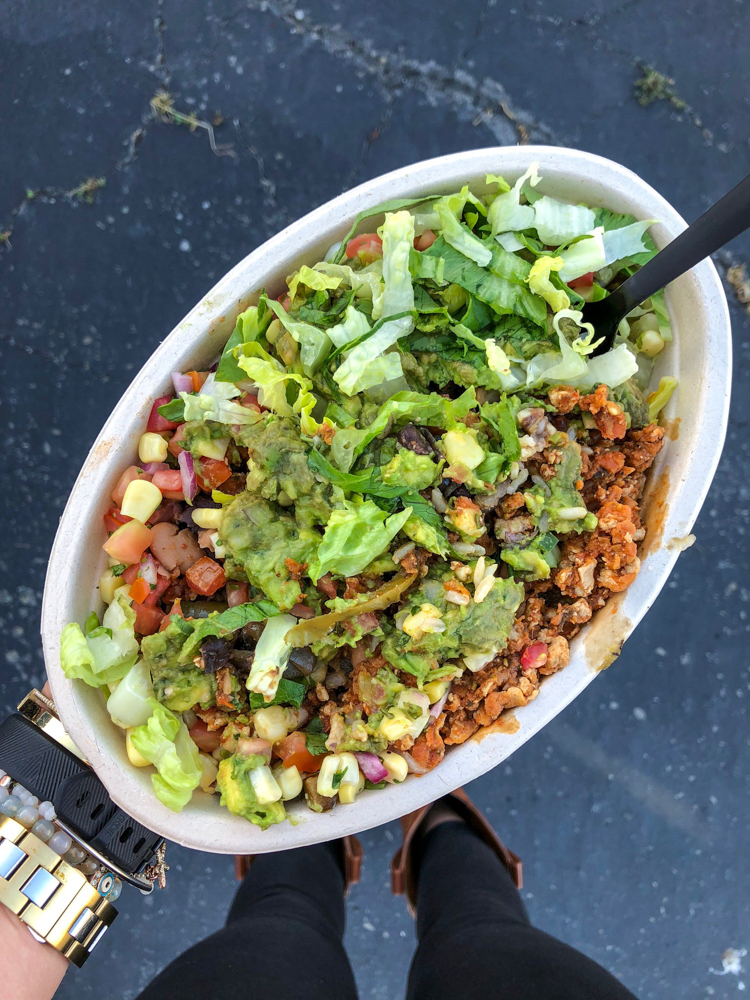 There weren’t that many people tailgating at all (I mean, it was a Taylor Swift concert and all), but we had fun dancing, laughing, eating, drinking and enjoying our kid-free time!

We ended up skipping the opening act and went in right before Taylor took the stage, which is actually what I like to do at concerts, because I hate waiting around between acts. Anybody else? 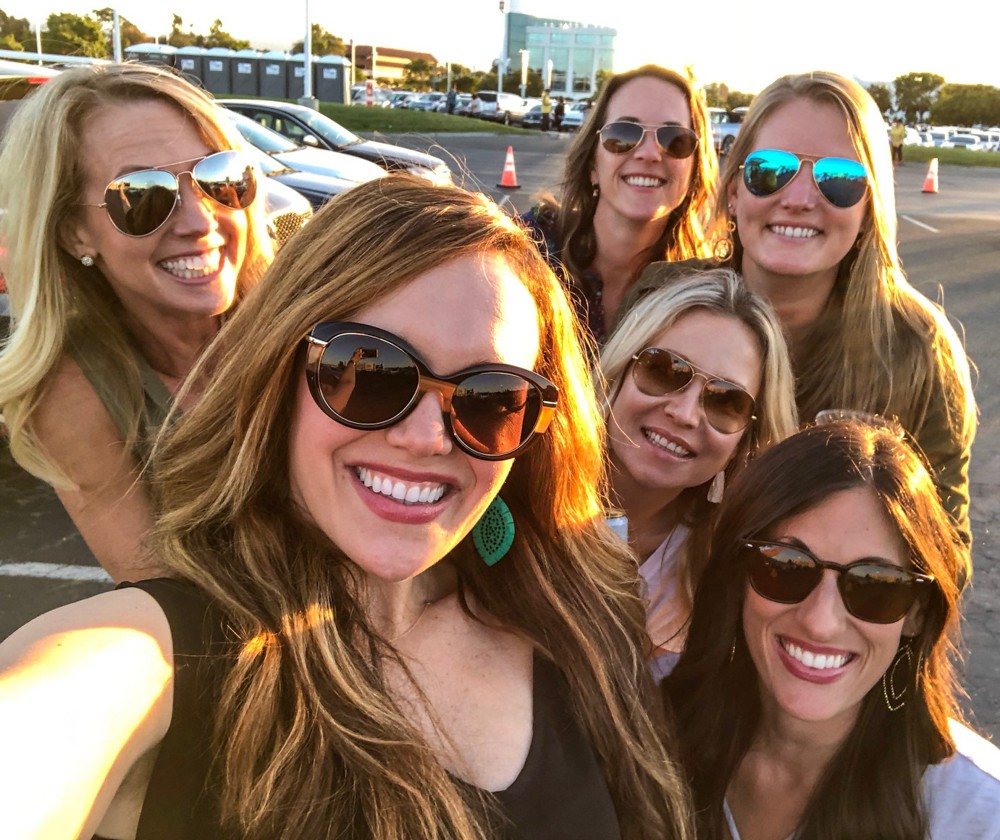 This was my second Taylor Swift concert (I saw her show in Orlando maybe seven years ago), and she truly delivers. She totally sings live, plays the piano, guitar and other instruments and just knows how to work the crowd. She also does a lot of talking, which I like.

While I don’t have her latest album, I’m not super familiar with the new stuff, but I definitely enjoyed dancing and singing along to all the classics. Favorite song? Maybe “Love Story”? 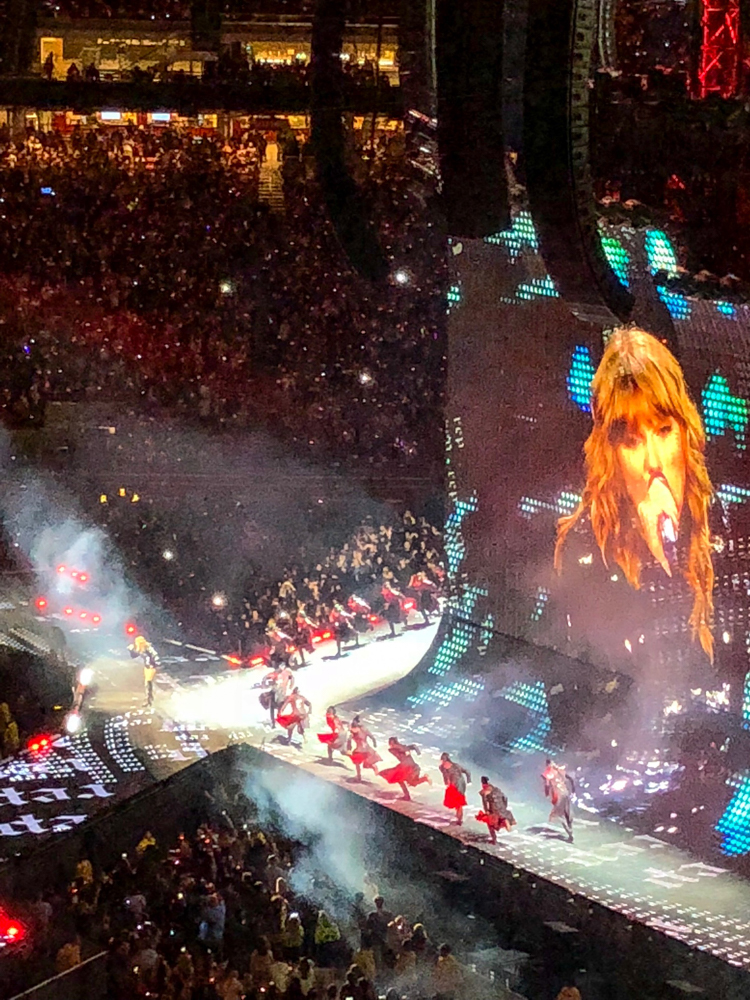 Our group split into two for the actual concert, and some of us had club-level seats — so even though we weren’t super close, it was the perfect concert-viewing experience.

Overall, we had SO much fun that night and got home super late, but it was worth it. Sometimes you just need to let loose with your mom friends, minivan and all!

Mother’s Day brunch and fun with the boys in SF

Saturday was pretty run-of-the-mill, because I taught a class, did some chores and hung around home, so we’ll skip right to Sunday.

On Sunday morning, Dave woke me up by bringing me a little bowl of fruit in bed, and I enjoyed that while snuggling with Rudy and Brady — and that was the start of the most perfect Mother’s Day! My very first one as the mother of a real babe.

After I was up, Dave prepared us both some avocado toast for breakfast, and I opened some sweet cards and gifts from Brady and Rudy (Rudy got me a gift card to The Cheesecake Factory — oh how he knows me so well). Then we got all ready (minus Rudy) and headed into San Francisco for an adventure.

This was actually Brady’s first time in San Francisco, and he seemed to love the City. He was such a trooper all day, although he did try to grab just about everything he saw, as usual … 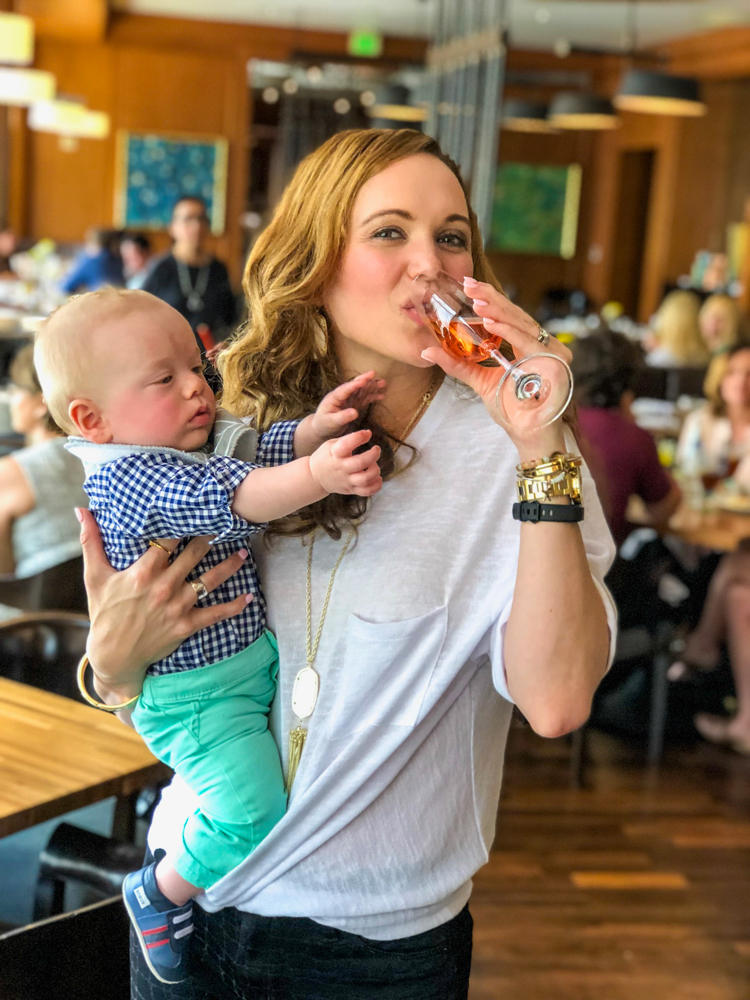 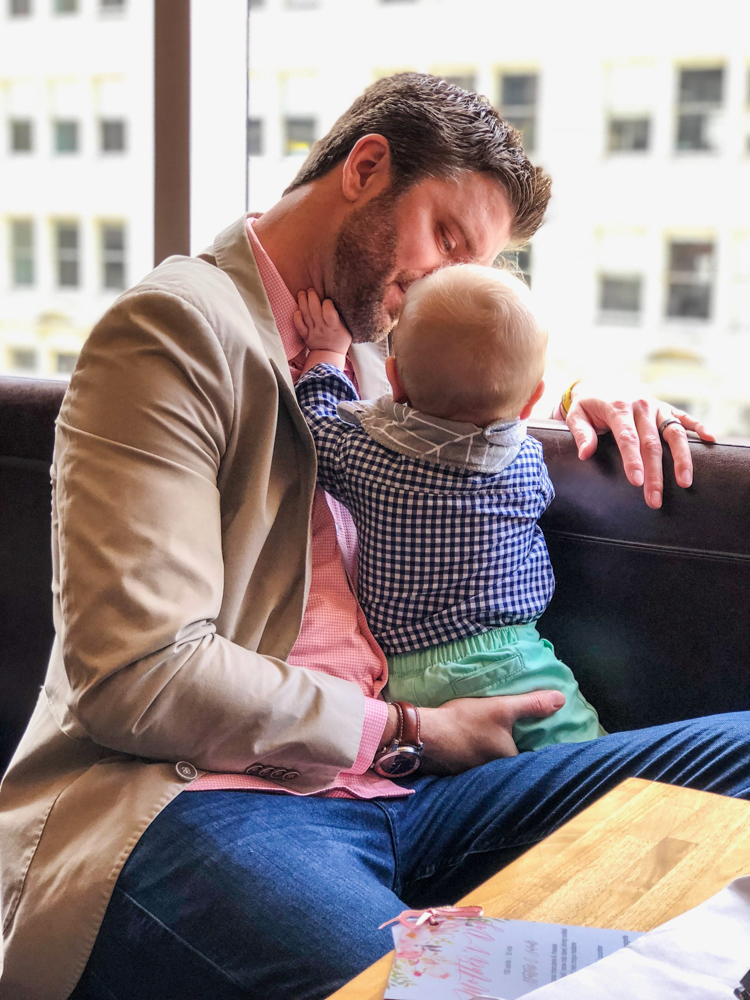 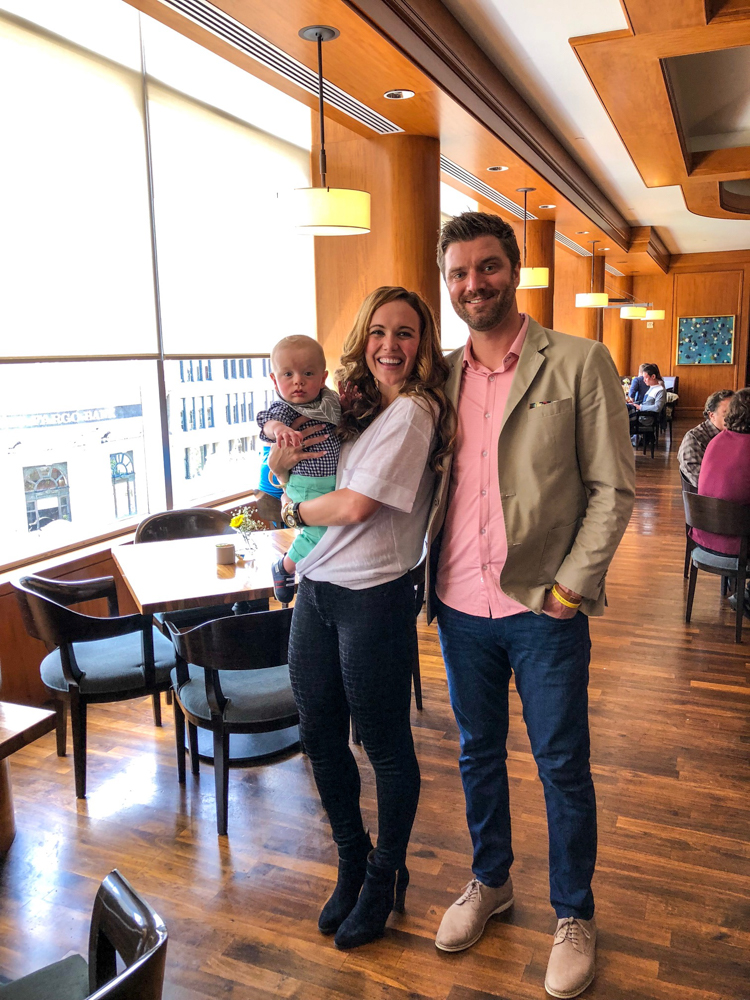 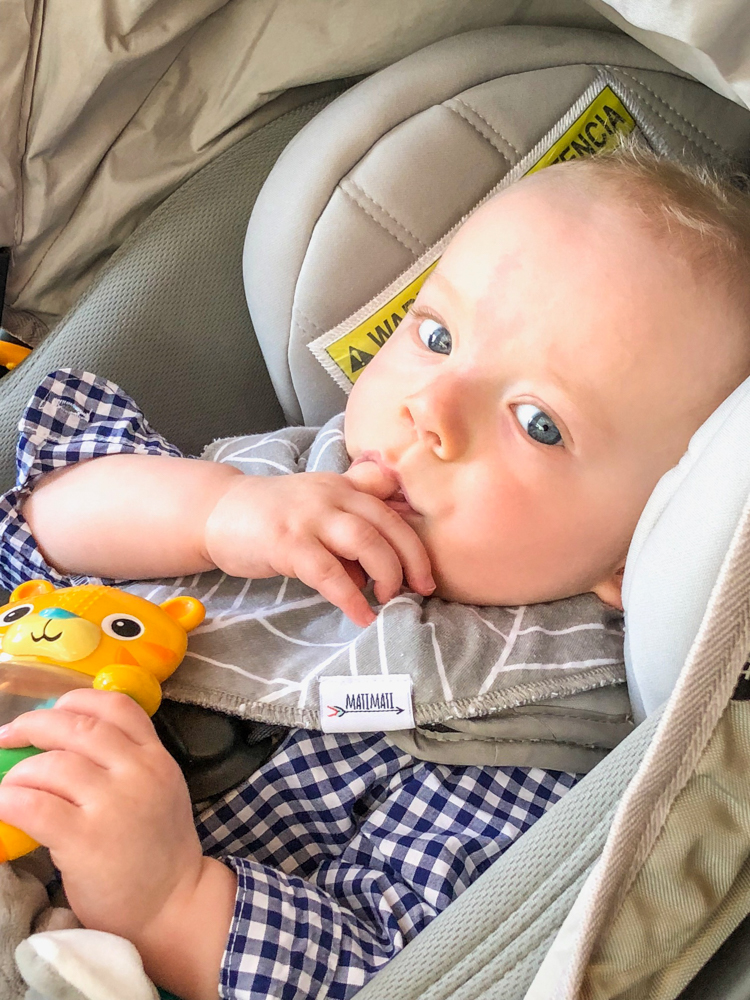 First up, we went to a fancy Mother’s Day brunch at the MKT Restaurant at the Four Seasons Hotel, and it was beyond fabulous. It was a preset menu, so we got to hit up an elaborate buffet of appetizers, choose a main dish from three options, then visit the buffet of desserts as well.

This was my first time at the Four Seasons and this restaurant, and I loved that you could look out over Market Street from the windows. There were quite a few families dining, which is not something we used to see a lot in the City when we lived there, but I think the holiday made it a popular day for a family brunch. 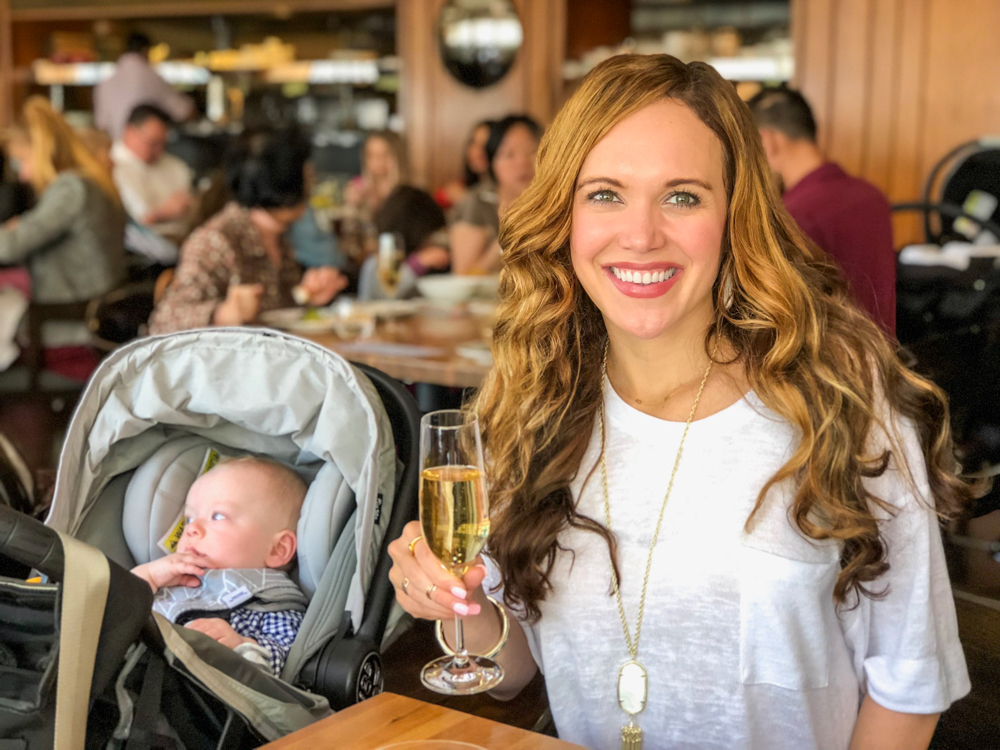 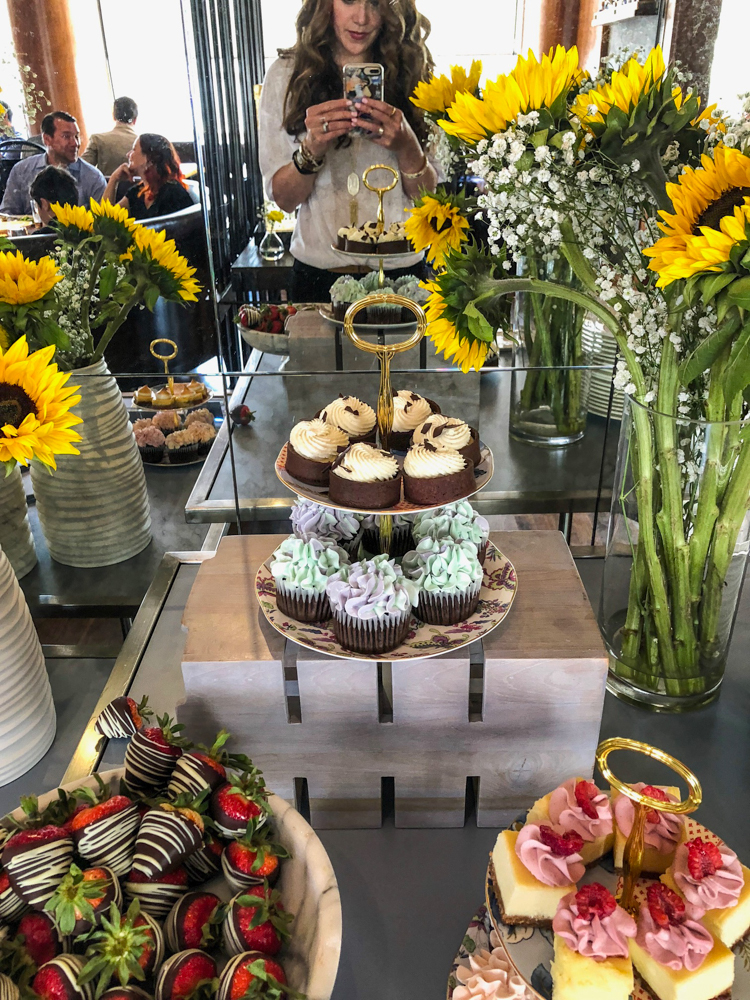 We have not taken Brady out to eat at any place other than our usual fast-casual lunch spots in Walnut Creek, so this was a bit of a departure, and he did fine. About halfway through the meal, he was ready to get out of his car seat, so Dave and I took turns bouncing him, and that kept him happy. He also had his trusty rattle with him, which always provides some entertainment.

Our meal was so tasty, and it was such a nice change of pace to wear make-up, heeled boots and jewelry and be dining at a swanky place in the City together. Oh, and I even got a free glass of champagne for Mother’s Day! Yes! 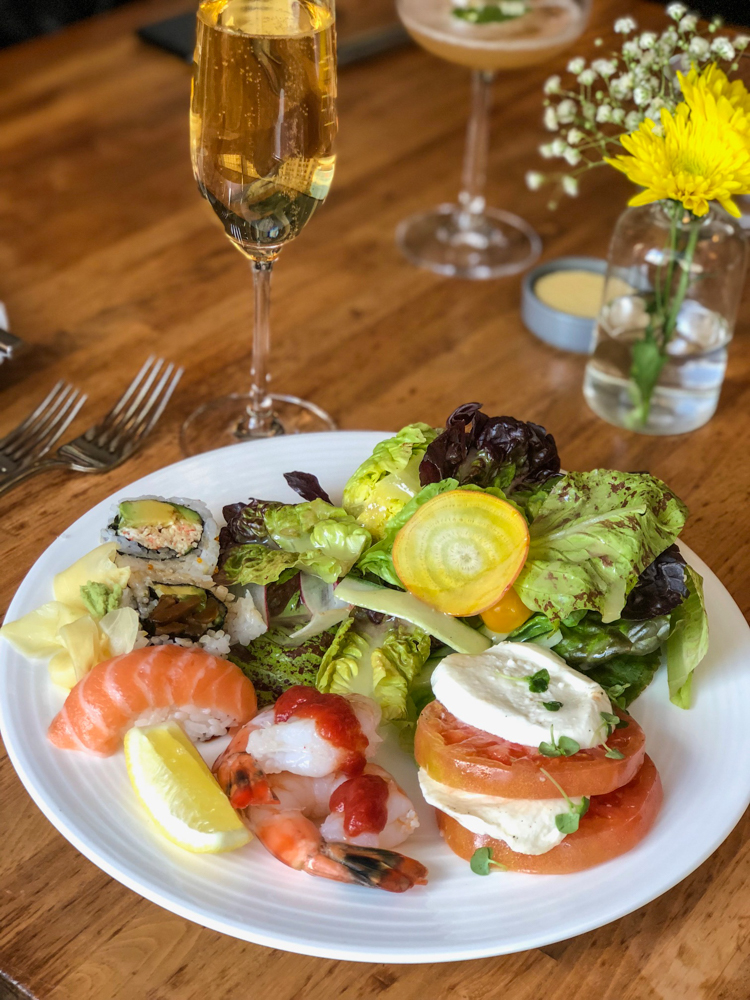 My main dish of black cod over a bed of greens, which was the best cod I’ve ever had … 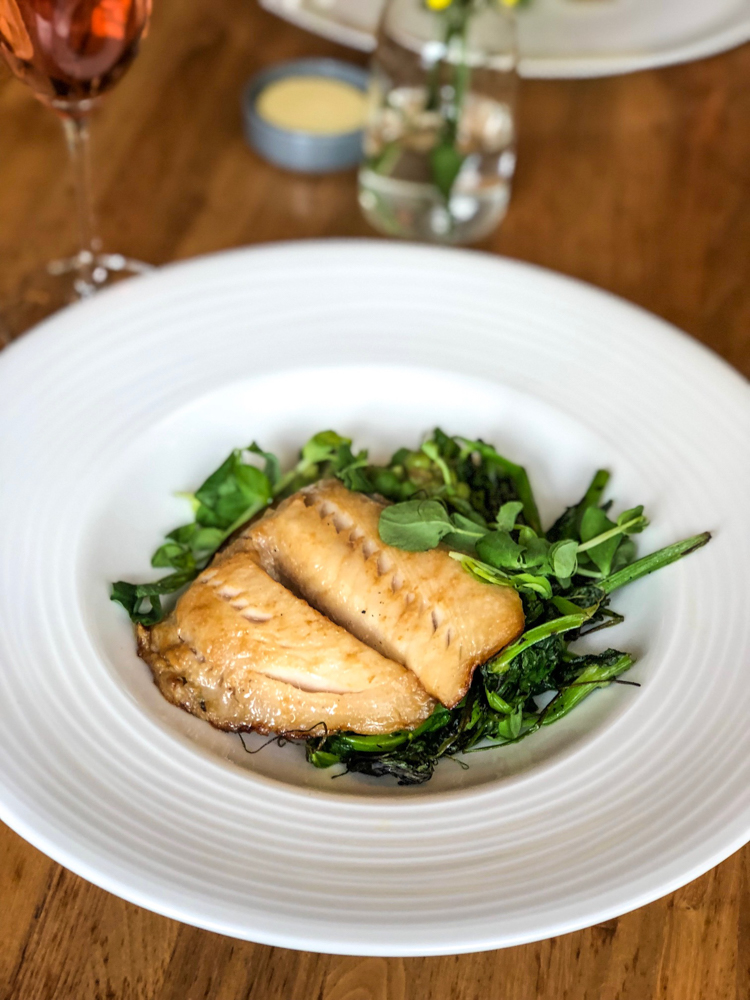 And finally, a modest dessert spread in anticipation of our next stop. The mini key lime pie with graham cracker crust stole the show here … 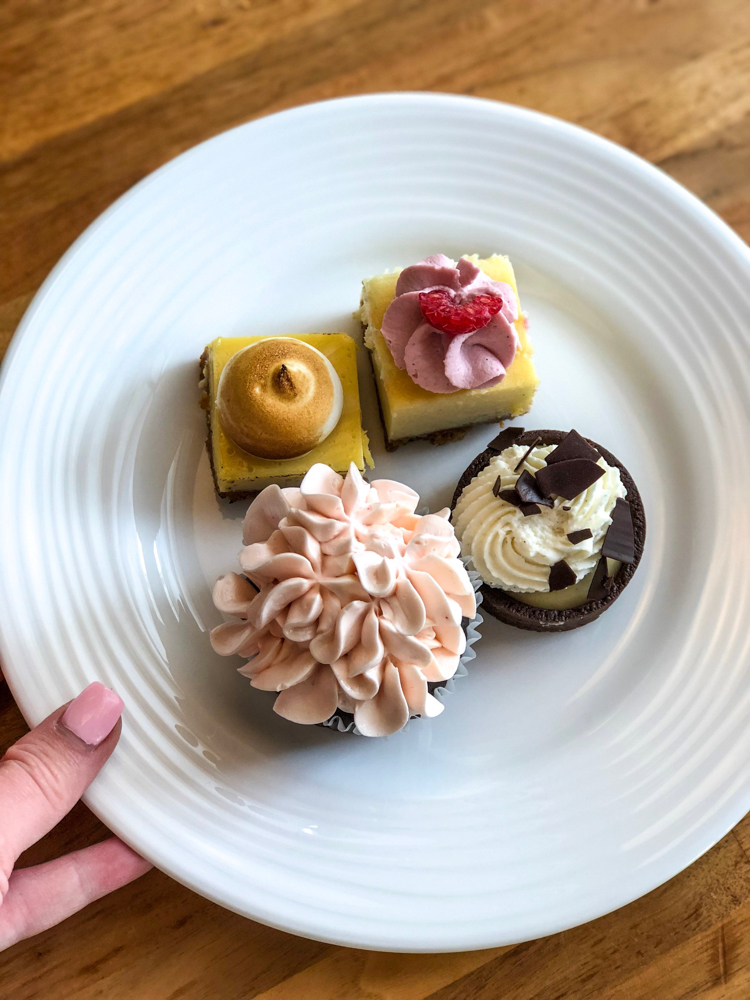 Truth be told, I like spending time with Dave and Brady no matter where we are, but there’s something to be said for getting out of the house for a nice meal. When nobody has to do the cooking or the dishes, you really get to enjoy yourself. It reminded me of the days when we would eat out many times a week, and it just felt right.

Visiting the Museum of Ice Cream in San Francisco

After brunch, Dave put Brady in the baby carrier (which is a change, because usually I wear him and it was so cute to see), and we walked across the street from the hotel to the Museum of Ice Cream. 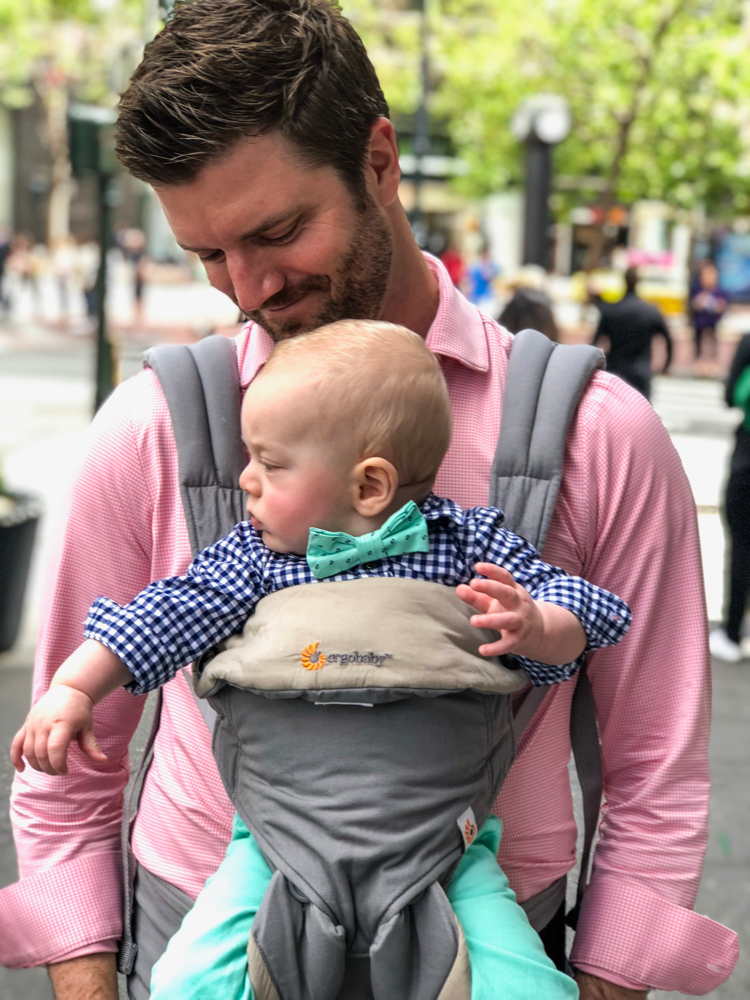 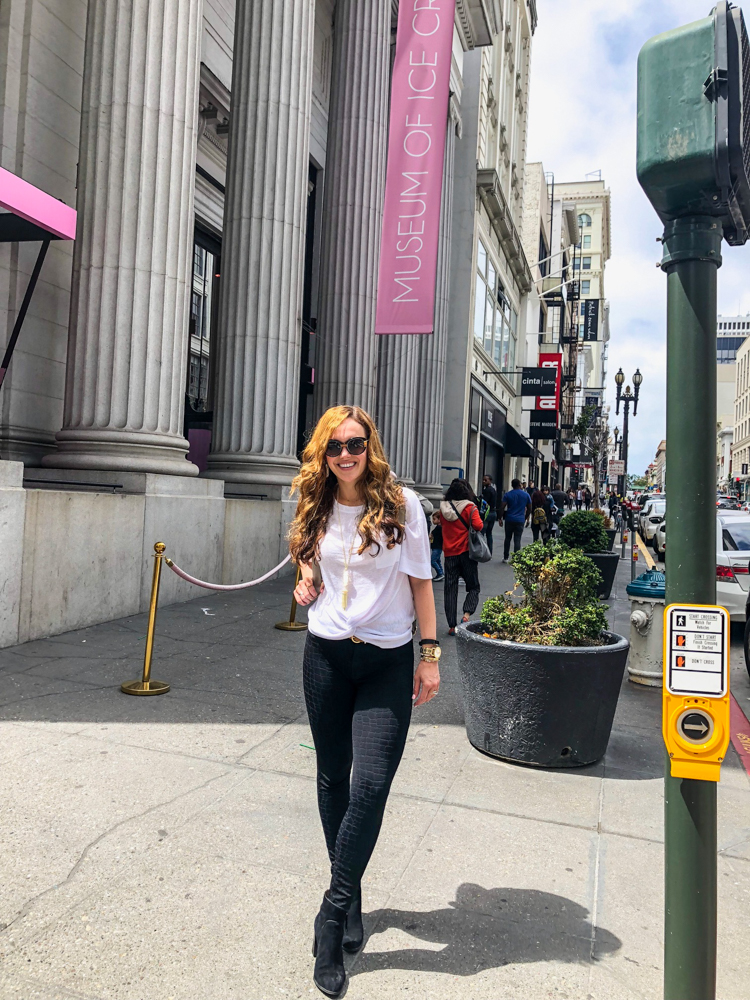 So if you’re a Bay Area local or you live in Miami or L.A., you’ve likely heard of this museum. The whole concept is only two years old and is super popular.

The museum is an Instagram hot spot and is totally THE thing to do. In fact, getting tickets is very difficult. I secured our two tickets in early March by reloading a ticket page over and over again when the tickets were released at 11 a.m. on a Tuesday, and I was so pleased that I could score the tickets for Mother’s Day for our little group. 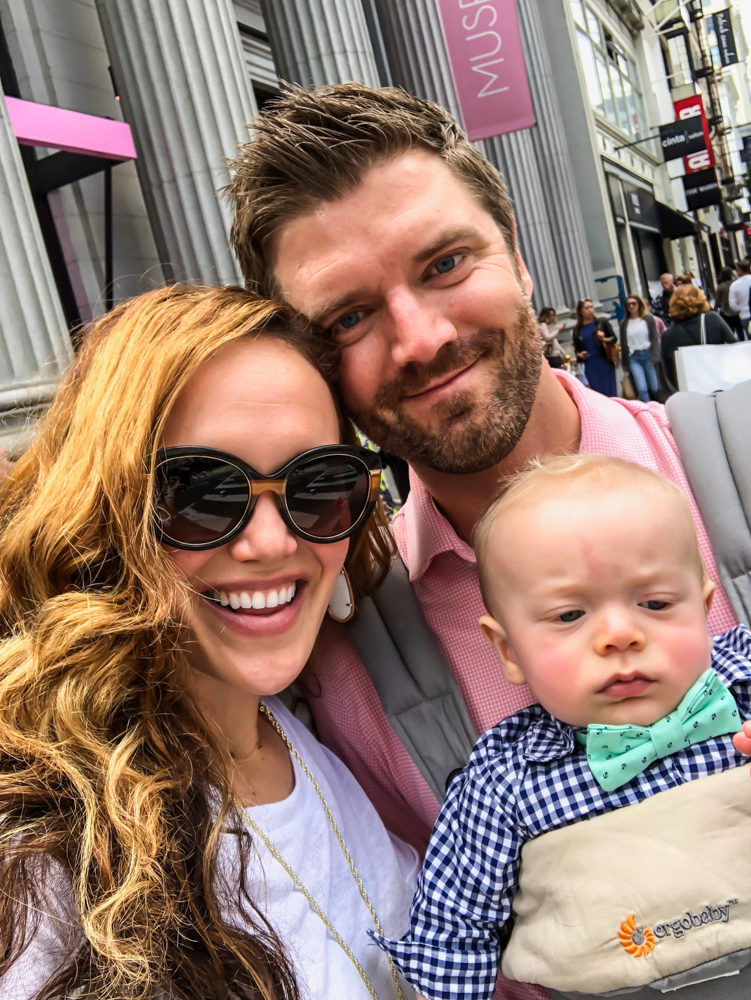 The Museum of Ice Cream is something I knew we had to do, and I’m so glad we did.

However, I have to admit — it was not totally as cool as I had hoped. The museum shares the history of ice cream throughout small colorful rooms, which you walk through on an Ikea-like path, and you get to sample some ice cream and treats a few times too. 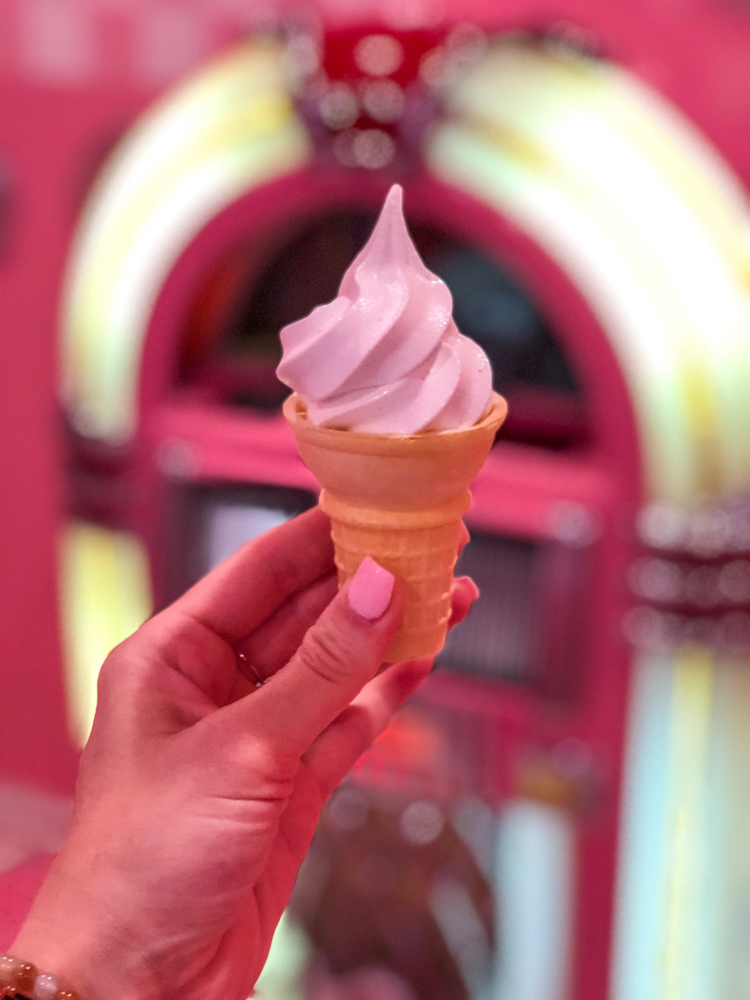 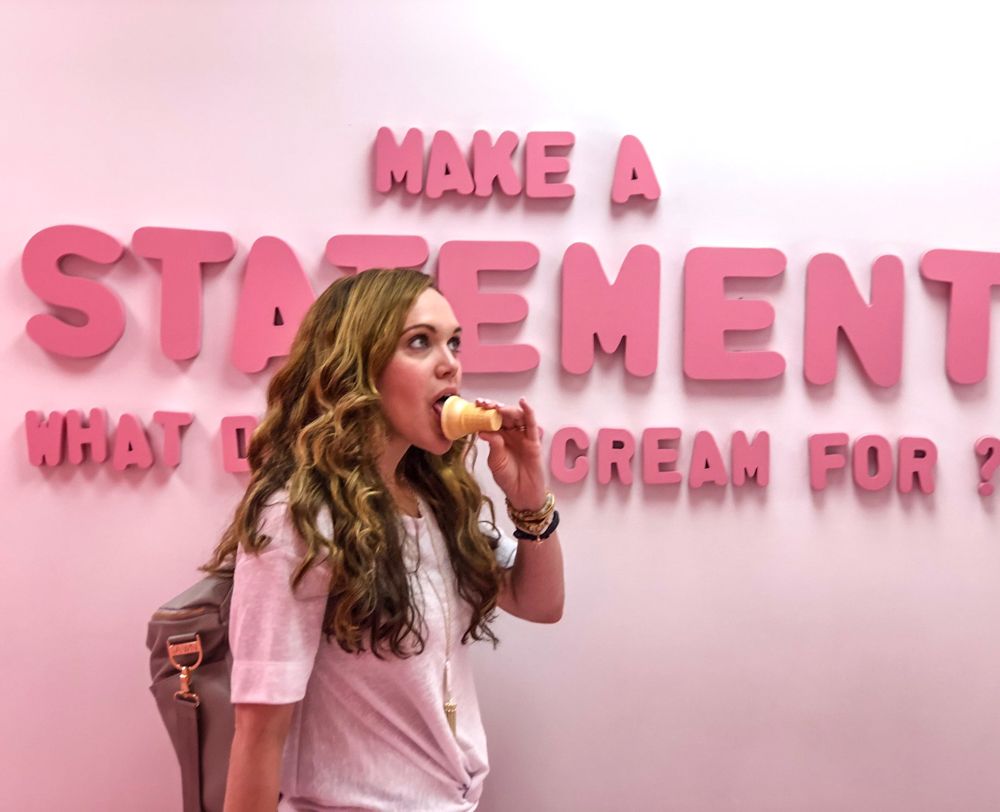 However, you only get soft serve ice cream once, and the rest of the treats included a mochi ball, cotton candy and a popsicle. So that was slightly disappointing for me as an ice cream lover, because I thought we would be trying different flavors of traditional ice cream. Not so much.

Next up with my complaints: It was really crowded, which I didn’t expect, because there are only a limited number of tickets for each entrance time-frame. Also, the rooms just weren’t as cool as I thought they would be — they had fun colors and cutesy candy decor, but they were not nearly as magical as what you’d see at say a Disney park. (Spoken like a true former Disney cast member, right?) 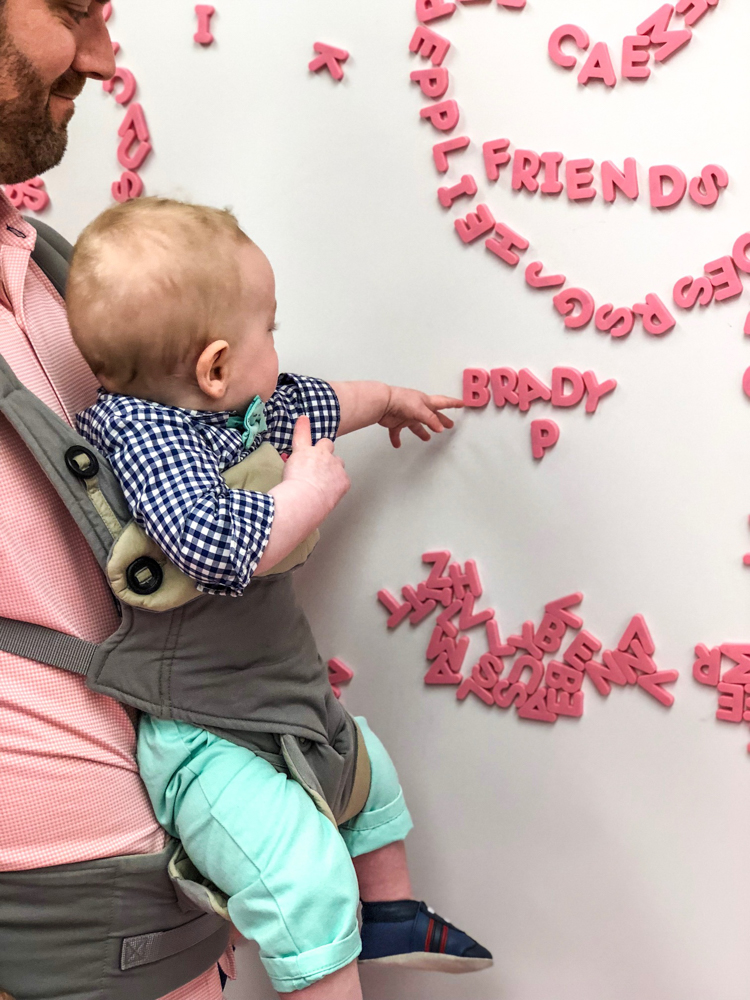 If Dave and I had stayed with our allotted tour group, we would have been in the museum for a good 90 minutes and would have also been pretty darn bored, but we decided to move ahead slightly, and were out of there in an hour flat, feeling like we saw and did all we could.

Overall, I am glad that we went and could say we experienced it. We took some cute pictures and enjoyed our treats, but it wasn’t as amazing as I was hoping it would be for all of the hype surrounding it. And the interactive elements were just so-so. But yes, it’s definitely a kid-friendly activity, if you’re wondering.

It was still fun for us to hang out together, and Brady seemed to love all the colors and being bounced around by Dave as we walked room to room. And I mean, we took a family picture with a unicorn, so there’s that … 🙂 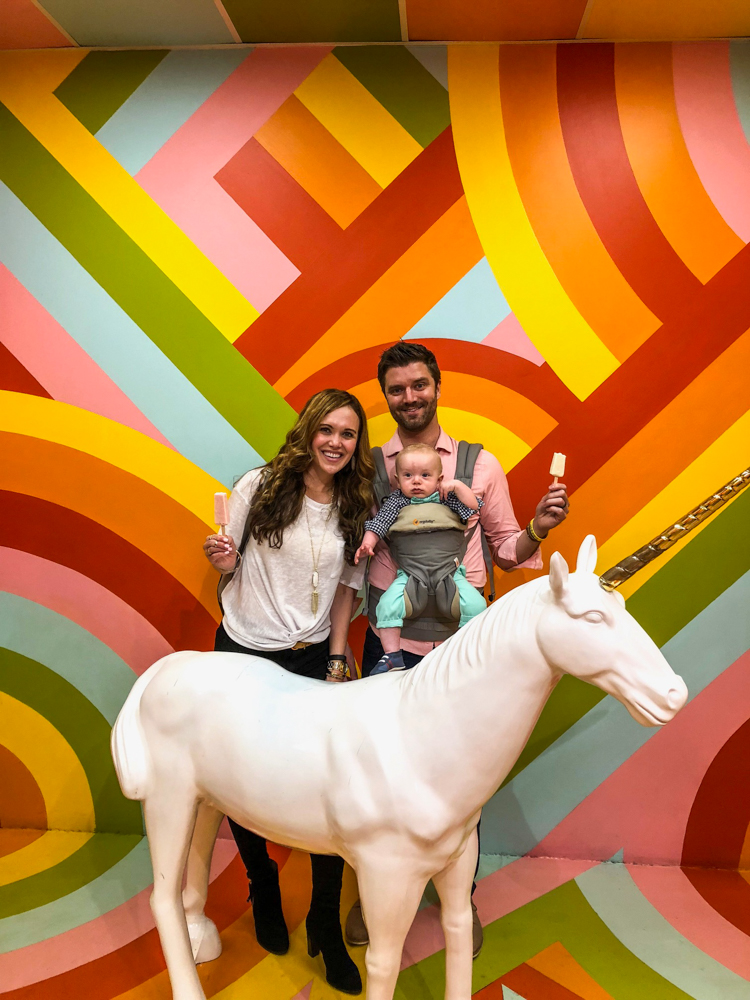 After the museum, we hit up Starbucks and made our way back to the East Bay for an evening of homemade pizza, laying low and some “Modern Family.” It was the sweetest and best Mother’s Day I could have asked for, and I loved every second of it, soaking up quality time with my little fam!

I hope your weekend was great too, my friends! I’m sending lots of love to all of the mommas out there, and those of you who hope to be mommas one day too! Cheers!

Mother's Day, Taylor Swift and the Museum of Ice Cream on A Lady Goes West ... Click To Tweet

When was the last time you went to a museum? Where and what?