Updates on Brady, motherhood and parenting coming at you today. A couple of weeks ago, I shared a look at what our daily life really looks like right now, but I wanted to take a moment to give a little bit more info on Brady, as he is growing so quickly and just hit 20 months last week. I’ve heard from many of you that you like to see what’s happening in toddler-land, so here we go …

It’s hard to believe our little man is the better part of two years. It seems like forever ago that he was a newborn, but I still can’t seem to wrap my head around him growing up. I absolutely adore the age that he is right now — he is still a little baby at times, but also a sturdy toddler companion who likes to explore and see the world at other times too. I know I say this during every update, but the toddler months are way better to me than the scary newborn months. Hands down! 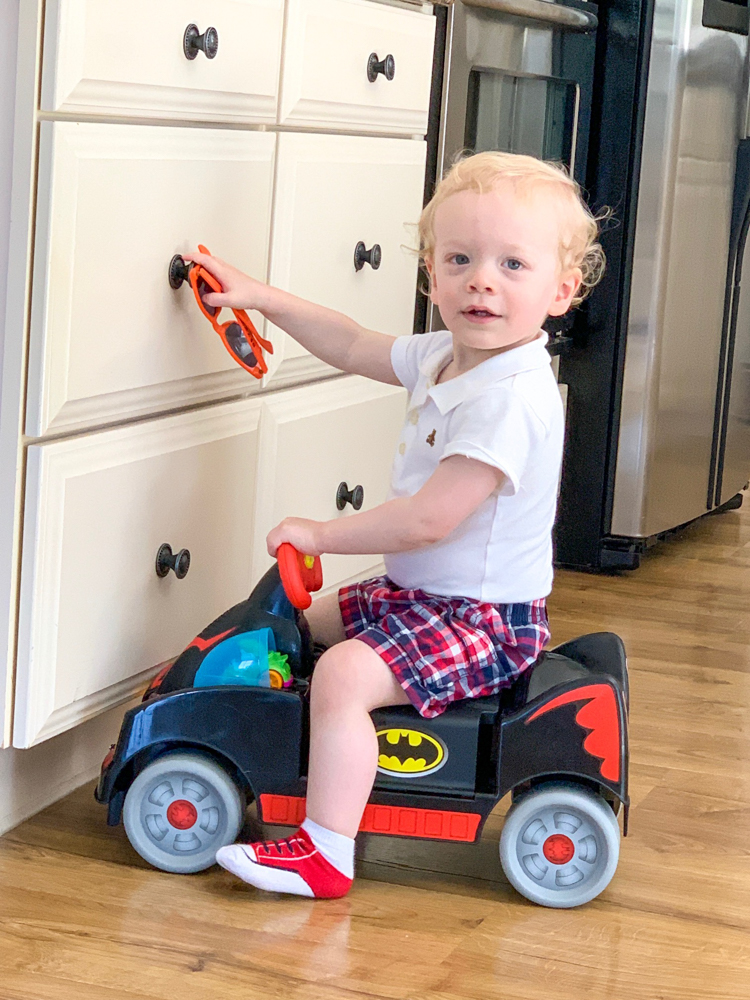 If I wrote this post three weeks ago, I would have said that Brady sleeps through the night basically every single night from 7 p.m. – 7 a.m. and takes a great 2-hour nap every single day. But then, about two weeks ago, he had a bad couple of weeks with teething and a cold and a fever, and all bets were off in the sleep department (he still napped pretty well). But knock on wood, we’re back in business with his mostly regular routine. Yes, he will have the occasional middle of the night wake-up, and that means one of us goes in there to change his diaper and rock him a bit (usually Dave), and he’s back out in five minutes. To be honest, we both like going in there and rocking his soft little body. He’s such a baby when you hold him in the middle of the night — a great comparison to his crazy toddler-ness during the day.

Here’s one thing about sleep though: After the time change happened in March, Brady has started waking up way earlier. He’s often up, playing on his back in his crib with his stuffed animals by around 6:45 a.m., whereas, for a while, he was sleeping until 7:45 a.m. every single day, sometimes later. That was so nice. We still let him romp around in his crib for a bit before going in there, and he doesn’t seem to mind. Plus, that gives me time to get in my 10-minute meditation before he’s up following me around and getting in to everything. 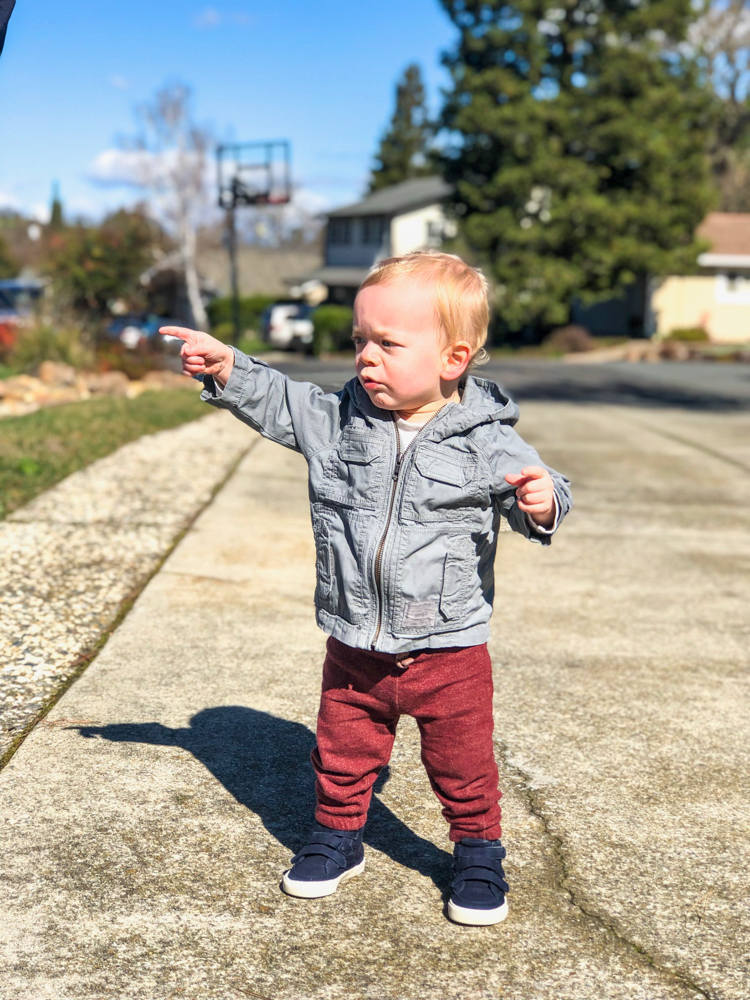 When I wrote this post about a “day in the life” I had several people ask me why I don’t give Brady breakfast or lunch. I do. He gets multiple mini meals during the first part of the day, but doesn’t like a bigger meal, until dinner, so I don’t call any of his earlier meals by anything other than a snack, but if it would make everyone more comfortable, I can refer to his meals by more structured names. 🙂

I can assure you I’m trying to do my best with my kid, but he doesn’t always want to eat that much — some days he wants more than others. Right now, he exists off bananas, blueberries, organic whole milk, organic Puff’s cereals, whole wheat crackers, Larabars (the kind with the least ingredients), coconut yogurt, veggie burgers, sweet potatoes, black beans, dates, peanut butter, homemade pizza, toast and corn. We take him out to lunch at least once on the weekend, and then he gets to try whatever is on our plates. He seems to be a fan of salmon, chicken and garlic bread, but we don’t often cook those things at home. 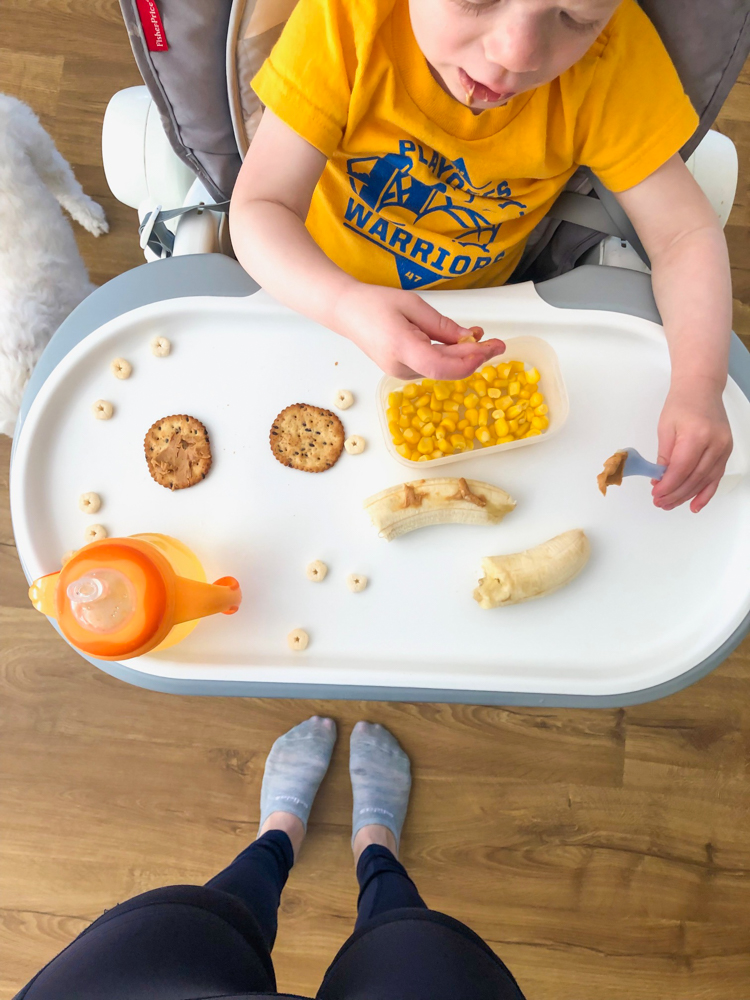 We’ve given Brady eggs a few times, and they always make his lips a little red, so I think he’s a bit reactive. But other than that, I don’t know of anything else he’s allergic too.

Also, Brady has about 21 ounces of organic whole milk a day, which is one bottle when he wakes up, one before his nap and one before bed. And he lovessssss his “baba,” which is what he calls a bottle of warmed-up milk. I believe we need to start transitioning him off this soon, but I don’t want to rush it, because he loves baba so much.

Overall, I think he’s doing great with food. Other than the times that he’s been sick, when he doesn’t want much to eat, he is mostly a happy little eater, and it’s adorable. 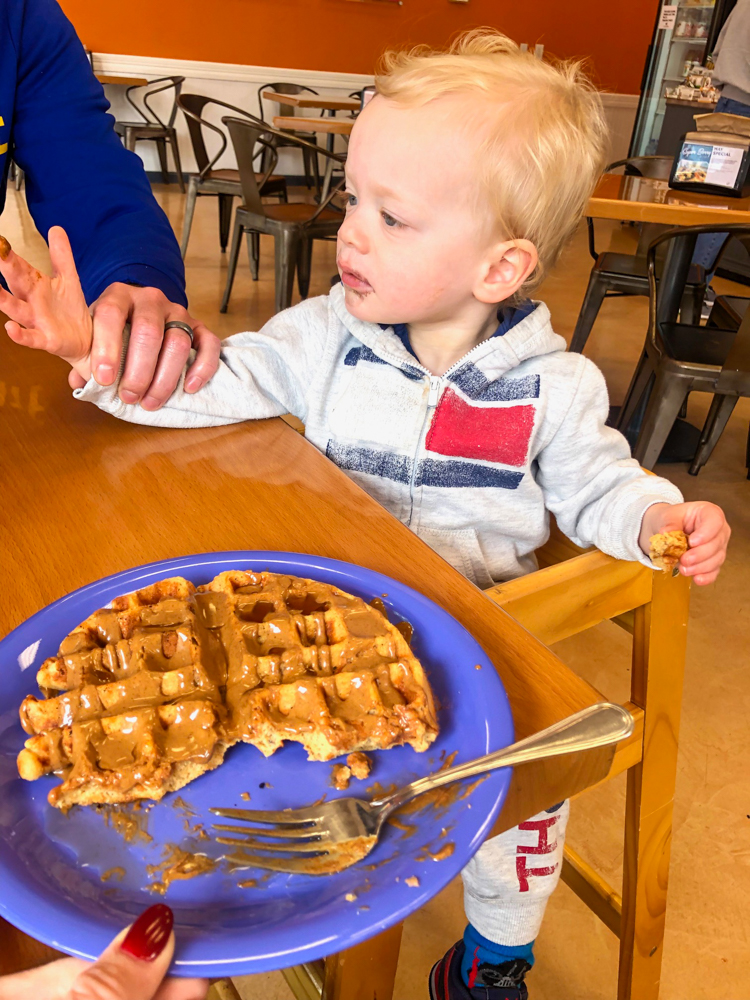 Our favorite phrase in our house is “monkey see, monkey do.” That’s because Brady is a little sponge, and it’s so amazing to see the things that he picks up on. He puts almost everything away when he’s done playing with it, which he clearly has learned from his neat-freak-of-a-momma. Whenever he sees a tissue, he puts it up to his nose and makes a blowing sound and says “boogie.” Whenever he sees a paper-towel, he wipes the ground with it. If he sees a puddle of water near the fridge, he goes to wipe it up. I’m serious here. He’s a little helper. He loves to put clothes in the hamper. He likes to hold the leash when we go on a walk with Rudy. He likes to sit in the front of the car and pretend to steer the wheel. He likes to “brush” his hair. And the list goes on.

He can’t quite get himself dressed or put on his shoes yet, but he does like to put his shoes near his feet, and he likes to put his tiny feet in our shoes too. He’s also finally getting bathed in the full bath tub now, and he’s quite the fan. 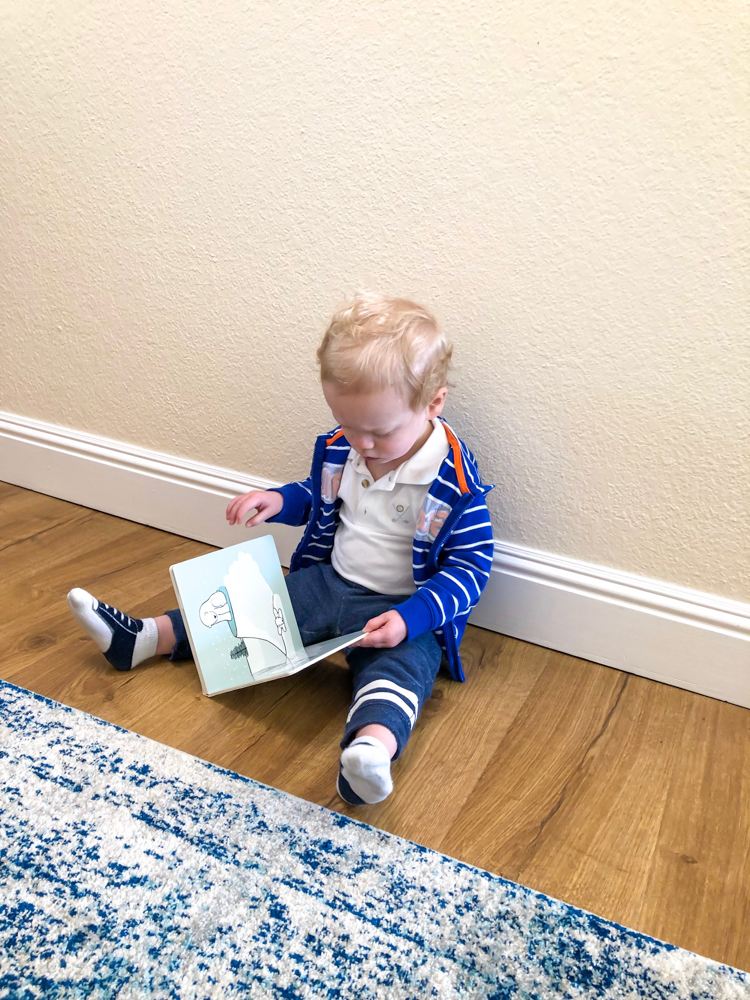 He talks all day every day, and he has a lot of words that make sense too. But the majority of the time, he’s saying total gibberish and he’s saying it all with passion — gotta love that.

Although I think Brady is the cutest little being in the history of the world, and I miss him after five minutes of being away from him, I don’t want you to think everything is 100 percent perfect with no complaints. Let me be clear: Toddler tantrums are real. I change Brady’s diaper maybe four or five times a day, and 75 percent of the time it’s a complete struggle — like a wrestling match. Also, he doesn’t like to be left alone or contained for even a few minutes — if I try to lock him in the playroom and run to the bathroom, he may throw several toys over the baby-gate and scream all five minutes that I’m gone. But on some days, he doesn’t.

He’s had a couple of phases where he has been really grumpy, but overall, he’s always happy when he’s playing. And he’s also happy when he’s out and about and playing outside of our house. 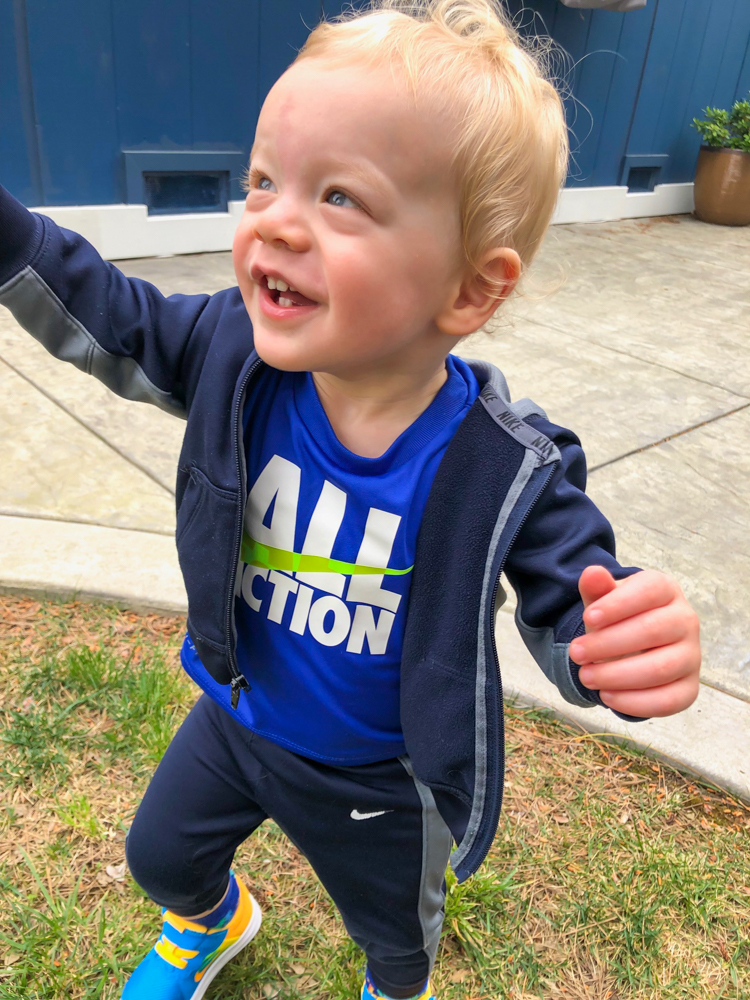 For the first 20 months of Brady’s life, I have been his full-time caretaker during the week and a lot of times on the weekends when Dave is gone and working, and it’s been a lot — but it’s been a job I’ve been honored to do. The only times he’s not with me during the day is when he’s at gym daycare and the rare occasion I get a babysitter to go to a work event — VERY rare.

Well, I’m excited to report that Brady is going to have a couple of new things coming up. First up, he’s going to a two-week little summer camp for three mornings a week in mid-June, then he’s officially registered for a preschool in the fall, where he’ll go for two mornings a week. It’s not much, but it’s the perfect first step. It will give him time to learn a little with other kids and play, and it will give me a little time to get more work done too. I can’t imagine dropping him off somewhere and pulling away, but I guess we’ll figure it out when we get there. Who will cry more, me or him? 🙂 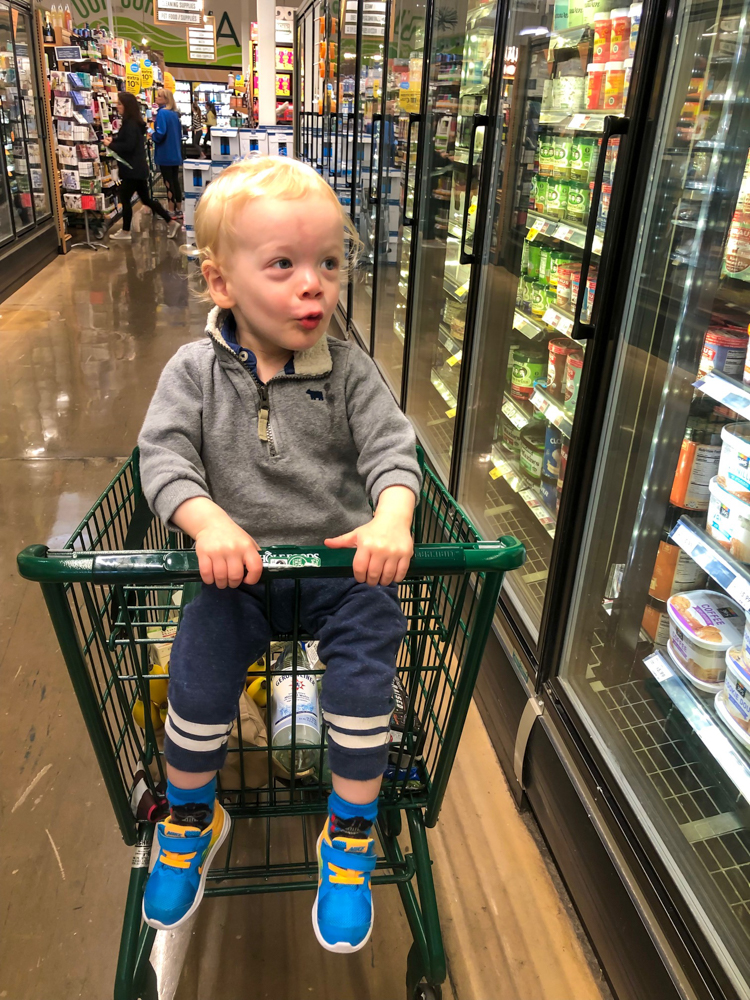 Brady by the numbers 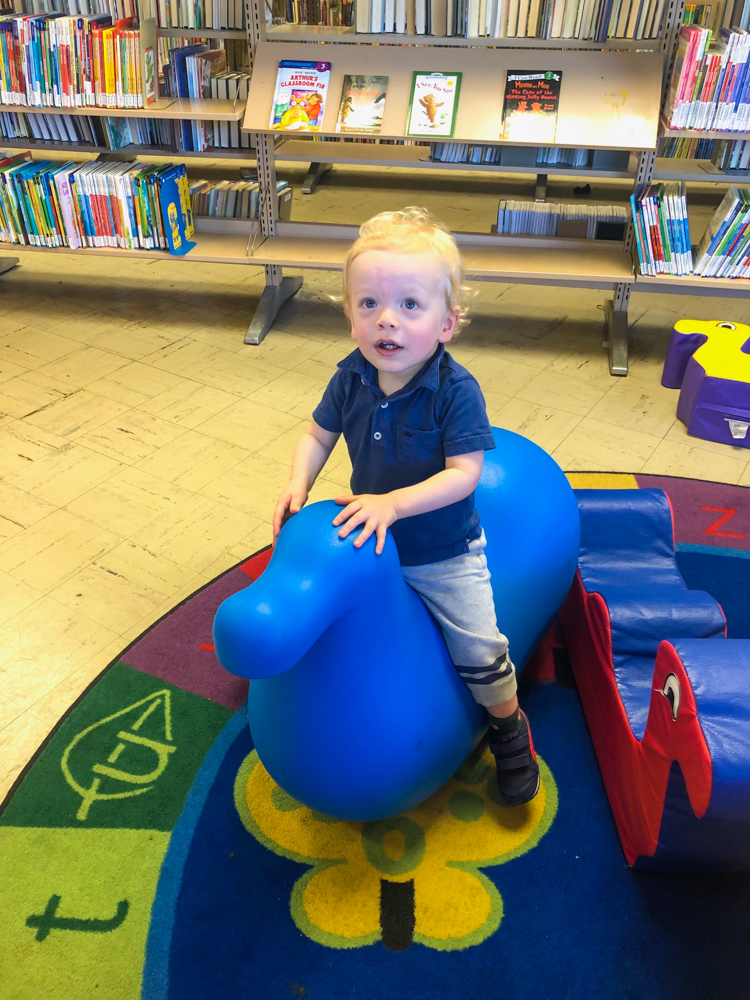 Just a few of his favorites toys

Other posts you may enjoy …

Have a wonderful day, my friends. Thank you so much for reading and for following along in our journey too!

Moms, what’s been the favorite age you’ve experienced with your kids?

When did you get rid of the bottle?