Hello from Florida! Guess what? Today is a bit of a special day over here. It’s my birthday! Yes, I’m a Christmas baby. In fact, when I was born, my parents brought me home from the hospital in an over-sized stocking, which they still have to this day.

I’ll tell you something: There’s not much I’d rather be doing on the anniversary of my birth than spending the day in sunny Southwest Florida with my family and friends, so I’m pretty content right now. We’ve got a low-key and fun day ahead, and I’ll probably pop in to share a picture or two on Instagram, so check me out there.

Seeing so many wonderful friends in just one day

So over the course of the last couple of days, Dave and I have seen, hugged, laughed with and hung out with so many of our very good friends in one super-fun overnight road-trip. The two of us left my parent’s place on Sunday morning and started our trip by meeting my best friend, her hubby and baby for a delicious lunch in St. Pete. I was so hungry and excited to be with them that I failed to snap a shot of my meal, but it was incredible and would have been worthy of sharing with you. It was a huge heap of rare dark, pink tuna chunks with cucumbers, served over a bed of spaghetti squash and doused in spicy chipotle mayo. I nearly licked the bowl clean. If you’re in the Tampa Bay Area, check out Ciccio’s Cali and order the Hot ‘N Crunchy bowl — you won’t be disappointed.

After that fun and tasty lunch, Dave and I ventured up to Orlando straight to the new home of some of our friends, which we hadn’t seen before. After a quick toast, tour and hello, we all hopped in the car and headed for downtown.

Good times and great people at the Orlando Magic game

We always try to go to a basketball game when we visit Orlando, being that Dave used to work there, so it worked out perfectly that there was an evening Magic home game on Sunday night. Dave wanted us to get to the game a little bit early, and I found out it was because he had arranged for me to be in the player’s high-five line before the game. It was such a cool experience. I got to go down on the floor with a few other fans and reach out my hand to give some love to the players as they ran on to the court during the opening ceremonies. Dave took some funny video, but I’ll leave you with just the one shot below. 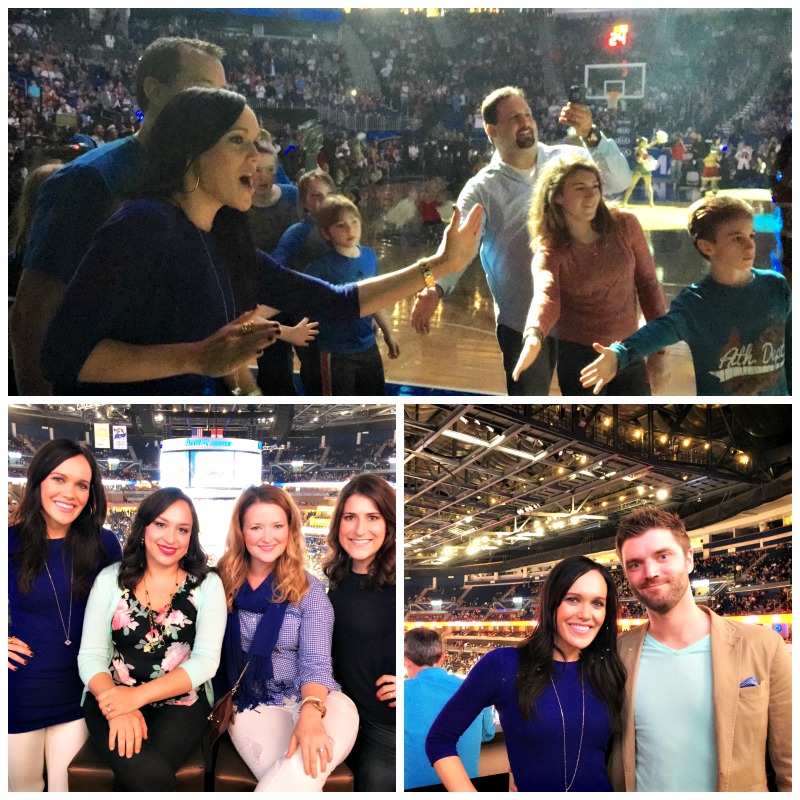 Shown above: My excited face while participating in the high-five line, my lovely Orlando ladies and Dave and me at the Magic game.

Revelations from the high-five line? Those players are so incredibly tall. And I’m happy to report, I made good hand contact with the entire starting line-up. I hardly recognized any of the players, but I was still in major fan-mode at the time. (But seriously, Go Warriors!)

We spent the rest of the game hanging out in a club area with our group and never once went to our ticketed seats. I can honestly say I didn’t watch a minute of basketball, because I was too busy reveling in the familiar faces of good friends, who I may not get to see that often, but who are still the best-of-the-best in my book.

Dinner and drinks at a special spot

We left the game a bit early with our group and walked down Church Street in downtown Orlando to our favorite restaurant there, Ceviche. Ceviche is a significant spot for us, not only because we had so many dates and group dinners there, but also because it’s where we held our rehearsal dinner the night before our wedding. Our group of eight nearly had the place to ourselves, as it was late on Sunday night, so we had no problem getting a big table in the middle of the restaurant.

We ordered a bunch of Spanish tapas and cocktails, and chowed down, enjoying each other’s company 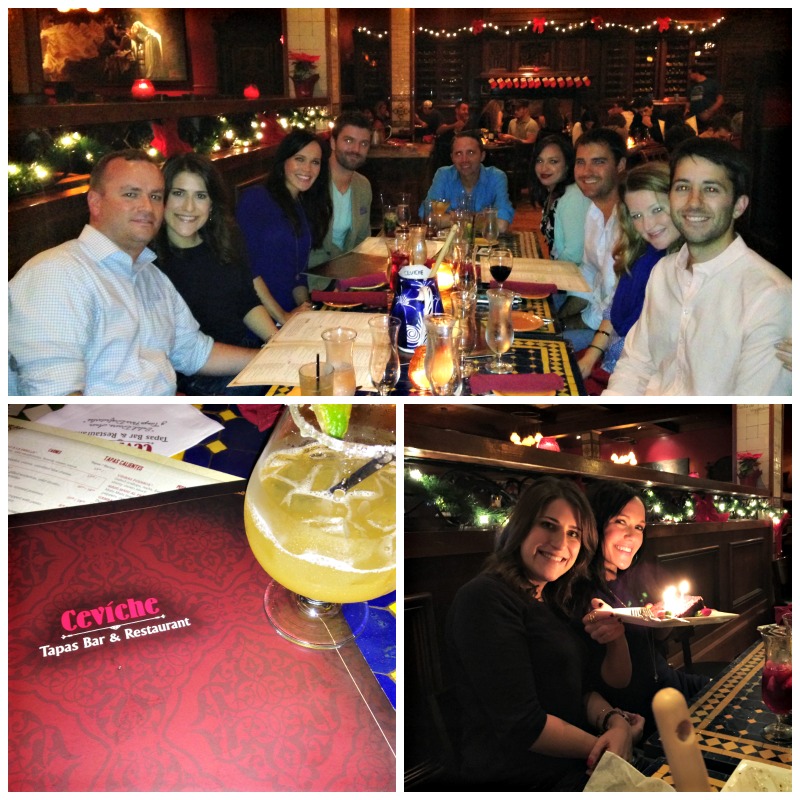 Shown above: Our group before dinner, a shot of my tasty agave margarita and me and a lovely gal-pal posing with an early birthday cake, which they surprised me with.

After dinner, we walked to Frank and Steins, just a few minutes away in downtown for some more fun. One drink in, the girls decided to call it a night, while the boys ordered another round and chose to stay out late. I was completely exhausted and was very happy to head home. After a full day of flying on Saturday and a lot of time in the car on Sunday, I was definitely ready to get in bed. Doing this reminded me of when Dave and I lived in Orlando, because we would often meet our group of friends out as a couple, then I would go home early. Because we lived downtown so close to the action, I could always leave and walk home alone whenever I wanted — it was pretty nice. Dave is definitely able to stay out a bit later than me, seeing as though my party train likes to take it to the station no later than 11 p.m., even on the weekends. What can I say? I’m old, and I like to sleep.

No matter how exhausted I was much of the time, I’m so fulfilled by the good times that we had seeing our Orlando people. It just doesn’t matter how much time passes, we don’t skip a beat with any of those folks.

Tired or not, on Monday, we woke up early, dusted ourselves off and stopped by some friends’ houses to say hello to some little ones. We got to meet not one, but two new babies who entered the world since the last time we were in Orlando. I love seeing my friends become parents, and from what I can tell, they are all pretty good at it. Yes, all of their little ones are completely adorable.

Other than visits with friends, to round out our stop in Orlando, there was a little fitness on the agenda. Although I had planned to drag Dave with me as well, I gave him a pass and hit up a good sweat session on Monday morning on my own …

Burning some big calories in the orange zone

So have you heard of Orangetheory Fitness? It’s a huge franchised studio, which is pretty much popping up all over the nation, and I recently tried one in San Jose, California and was intrigued. Once Dave and I had made our plans to visit Orlando, I reached out to one of my friends who teaches at the new Orangetheory in Winter Park. This instructor used to be one of my favorite class members when I taught BODYPUMP in Orlando, and since I moved away, he not only became a Les Mills instructor, but also became a personal trainer and now an Orangetheory head trainer.

As expected, he taught an excellent one-hour class, which consisted of cardio on the treadmill and rower, and plyo and resistance training using dumbbells, the TRX and a weighted medicine ball. We didn’t do the traditional Orangetheory workout this day, because it was set up in a modified and festive 12 Days of Christmas format, but it was killer. I can’t count how many burpees I did, but it was a lot.

Orangetheory definitely offers the environment for you to push yourself very hard, while going at your own level in both the strength and cardio zones. And what’s the unique selling point of the class? It’s that everyone wears a heart-rate monitor, so you can keep track of which “zone” you are hitting throughout the class on some big-screen TVs shown throughout the studio. I was in the red for about 11 minutes, in the orange for about 18 minutes and in the lower zones for the rest of the time. The coolest thing? I got an email a few hours after class letting me know how hard I worked and giving me the final tally that I burned about 500 calories. Good stuff! 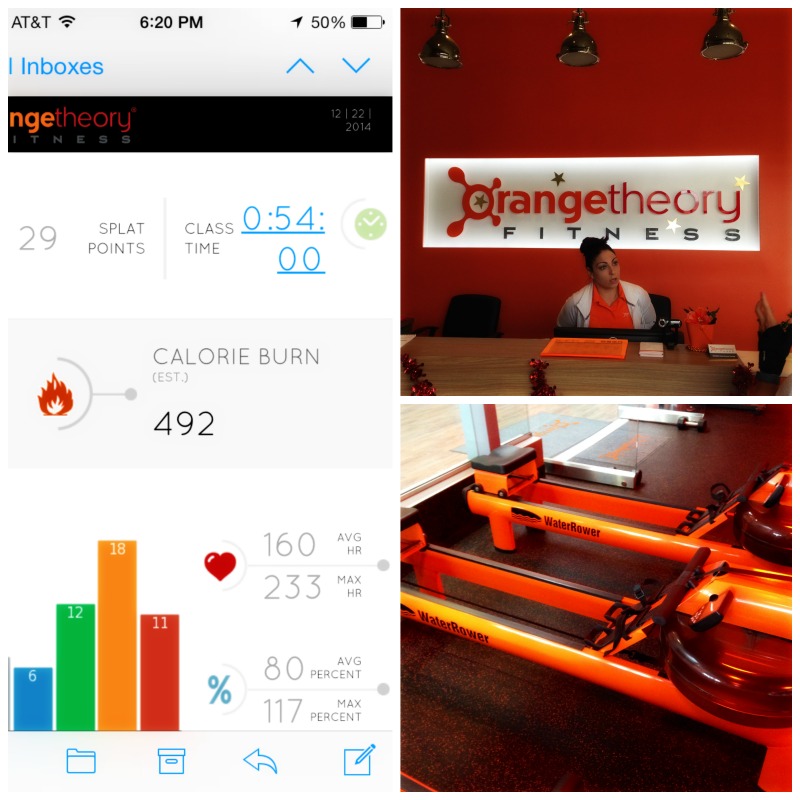 I definitely felt like I was working hard and am glad to know that I spent the right amount of time in the orange and red zones during the class, truly exerting myself in the fat-burning zone. I liked seeing my percentage levels on the screen, because I was pretty sure I was pushing hard for a lot of the time, and the numbers proved that I was. I’ll probably get more into the specifics of an Orangetheory workout and do an official class review soon, but for now with the holidays and such, that’s what you get. Go for it!

Grabbing some grub and hitting the road again

Once my workout was done and we visited some more friends for a quick hello, Dave and I hit up Publix for some food. For those of you who don’t know, Publix is the best grocery store in the world and one that we truly miss living in California. At Publix, we got a few things to munch on (a sub and sushi) and ate in the car in true classy fashion, before hitting the road back to Southwest Florida.

We arrived back at my parent’s house in the early evening, laid around, had a big tasty dinner and hit the hay early. To say we were tuckered out would be a major understatement. We may have over-scheduled ourselves during the beginning of this trip, so we’re fully prepared to stay local and keep our commitments to a minimum for the rest of our Florida visit.

But suffice it to say, every minute of our road-trip was worth it, because you can’t beat moments with good friends in your old stomping ground. We’ll always love Orlando, and we’ll always love all of our people who are still there. Thanks, O-town, you’re a pretty good spot.

Alright, my friends. I’ll be off treating myself to some birthday celebrations today. (Thanks, Becky for hosting this lovely “Treat Yourself Tuesday”!) I hope you guys are all doing great. Now do me a favor, and go off and do something nice for yourself. You definitely deserve it! I’ll see you all back here tomorrow for some talk about food.

Have you ever used a tracker to see how many calories you burned during a workout? When was the last time you visited with an old friend? What are you up to today?