This past weekend, Dave and I flew to Columbus, Ohio to visit our best friends, and only one of them knew we were coming. We had planned this surprise trip a couple months in advance, and it came up quickly, however it didn’t exactly go off without any hiccups. And quite honestly, I don’t have a ton of pictures of all of the happenings, because I was so darn busy enjoying them. However, I do have this … 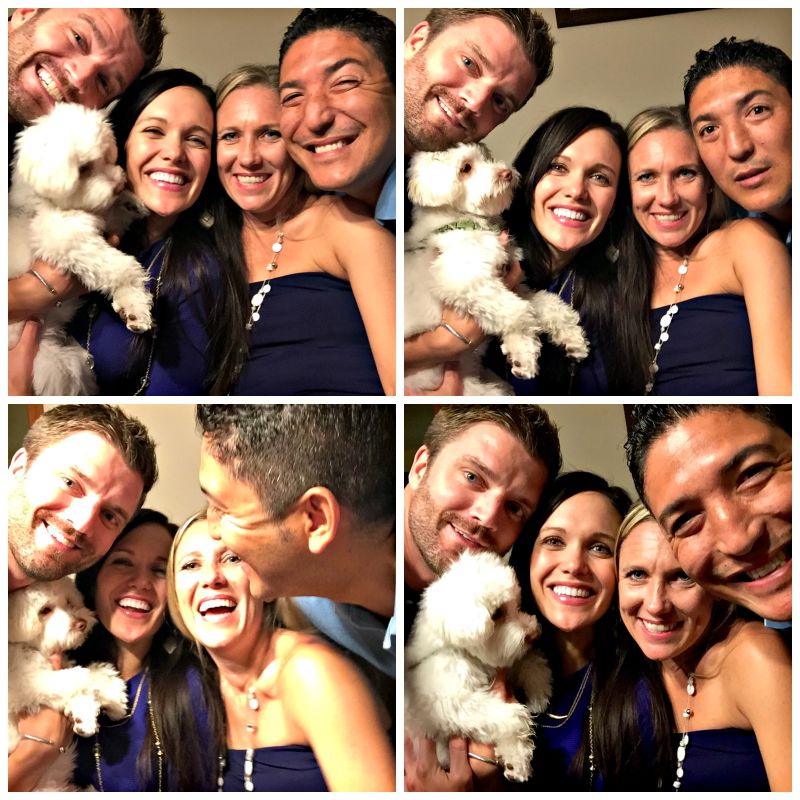 I’m pretty sure this particular collage is not in need of a caption. Not at all.

Dave and I (and Rudy, of course) were supposed to leave the Bay Area mid-morning and arrive in Columbus just in time to get picked up at the airport and go to a fancy birthday dinner, as the surprise guests. Well, after not one, but four different delays, our flight ended up leaving about three hours late. Thus, dinner was scrapped. In fact, our whole surprise-arrival-web-of-lies began getting quite tangled, as one of the friends had to continue to update their story as our flight got later and later.

While this trip had a rocky beginning, it ended up being one fabulous three-night stay in the Midwest. Before we get to the weekend recap, here’s a little background …

Our friends Grant and Bre moved to Columbus, Ohio from Jacksonville, Florida more than a year ago, and this was our first time visiting their new home. Grant was the best man in our wedding, and Dave met Grant and Bre while playing with them in a traveling soccer league about seven years ago. Even though we’ve never lived in the same city as them, we’ve always been very close. Our visits have gotten much less frequent since we moved to California, but Grant and Bre were able to fly to San Francisco to surprise Dave in March of last year, which was perhaps one of the most fun few days we’ve ever had — they make extraordinary guests, who are up for anything. Needless to say, when it came time for Bre’s birthday this year, we knew we wanted to return the favor.

Getting to Columbus, Ohio to do the big surprise

After several delays and a long flight, Grant was able to pick us up at the airport around 10 p.m., and he took us to the restaurant, where he had been having dinner with Bre and another couple. As Bre left to visit the restroom, we went inside and sat at the table, and she was totally shocked when she arrived back and saw us sitting there. While at the table, we reviewed all of the lies that Grant had told Bre leading up to our arrival, which was pretty entertaining. She was relieved that all of the confusion and vague statements were designed to throw her off the scent of us coming to town …

That night we went back to their house, had some snacks and a bottle(s) of wine and stayed up way too late (which is when we took those framable photos above, as you may have guessed).

In the morning, we took our time waking up and got a chance to meet their adorable two-year old twins, as well as hang out with their four-year old son. Their three children are absolutely as cute as can be, and they were so good with Rudy, who they called “Wooooooooody” the whole visit. After a morning of playing around, we pulled ourselves together and headed out for a day of college football fun.

Picking up the tailgating supplies at Kroger

First stop was Kroger, which I was excited to visit because I had never been in before. We loaded up on tailgating supplies, like snacks, seasonal beer, sweets, etc. and headed off to the university. We set up a tailgating spot in a lot nearly two miles from the field, and even though it started out empty, it filled with cars by the time kick-off came around. We took our time eating tons of food, people-watching and catching up, until it was time to head into the game, which started at 3:30 p.m. (And as I know from my days in Gainesville as a student at the University of Florida, tailgating is way more fun than the game itself.) 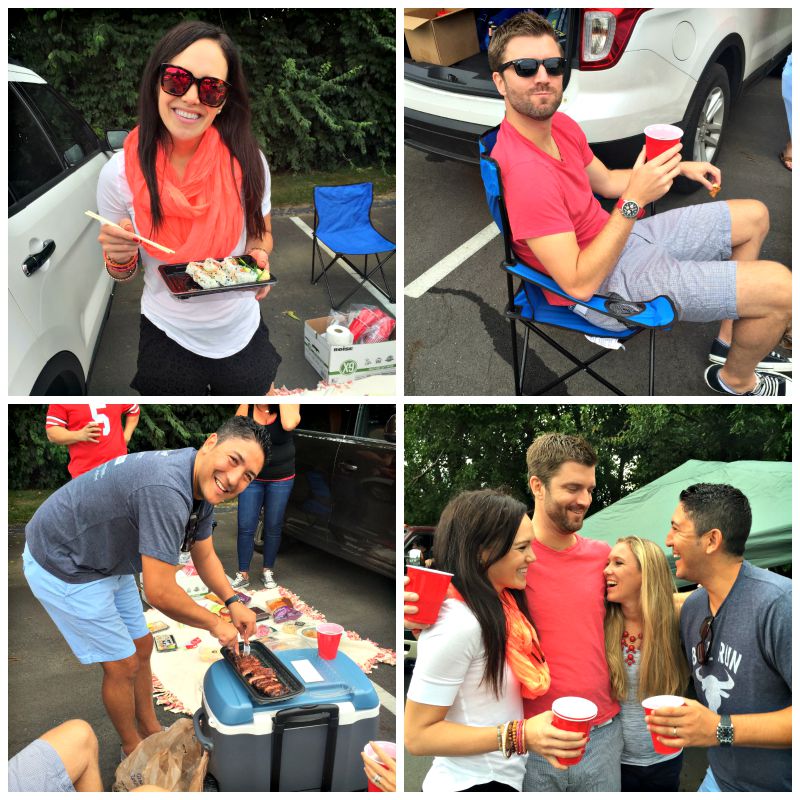 Who says you can’t eat sushi or ribs at a tailgate? We keep it classy no matter what time-zone or state we’re in. Pumpkin beer and grocery store food for the win.

We had a tent, so we were able to stay dry once the skies turned dark. And the rain started coming down pretty badly as we were heading in, so we got drenched (lucky for us, we had all packed rain jackets expecting the weather to take a turn). But the rain didn’t put a damper on our fun. Once inside the stadium, we split into two groups and then met back up to hang out in the new club level of The Ohio State University stadium, which is a nice area behind the seats where you can get food and drink in a bar setting. We had some treats and beverages and then watched a little bit more of the game from our seats. The one thing we didn’t do? See the marching band! Sadly, we were in the club area while they performed, and we came outside to catch the show just as they finished. I was pretty disappointed in that, because I hear the band is really entertaining. Maybe next time? 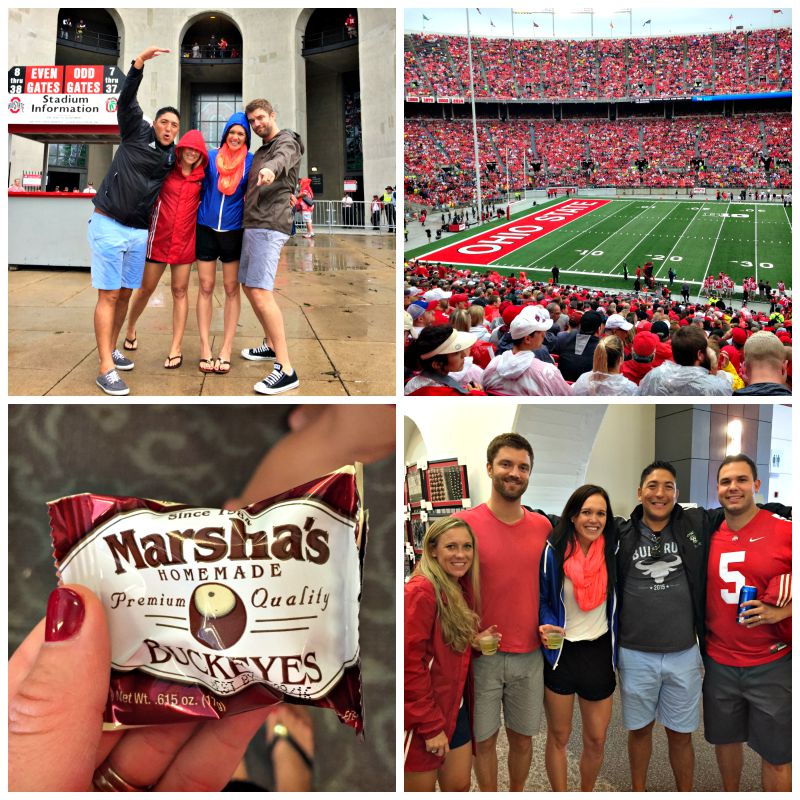 A bunch of Florida people taking in an Ohio State game. And those Buckeyes? So tasty!

After a couple of hours of cheering, we left the game early and headed back to our tailgate area to put a dent in the food and drinks. Once we had done our work, we packed up and went back to Grant and Bre’s house.

Once we got home, we played Jenga, told ridiculous jokes, ordered pizza and spent a few hours sitting at the dining room table laughing. In fact, it was one of those nights where my face hurt from laughing so much. Overall, it was a pretty hearty day of gluttony and fun, which was just what we all needed together. And after that full day of activity, we actually went to bed at a decent hour. In fact, I think we all got about nine hours of sleep that night, unlike the night before.

On Sunday morning, we were all slow to rise, and we had breakfast at home while feeling rather lazy. Then we suited up and went on a little Columbus tour. We had lunch in downtown Columbus at Stack City, where I had a delicious salmon salad and a super tasty grapefruit beer. Then we walked to the North Market (a cool place that reminded me of the Ferry building in San Francisco) and circled the various local vendors and food counters. I purchased some fudge, and we picked up treats to take home for later. 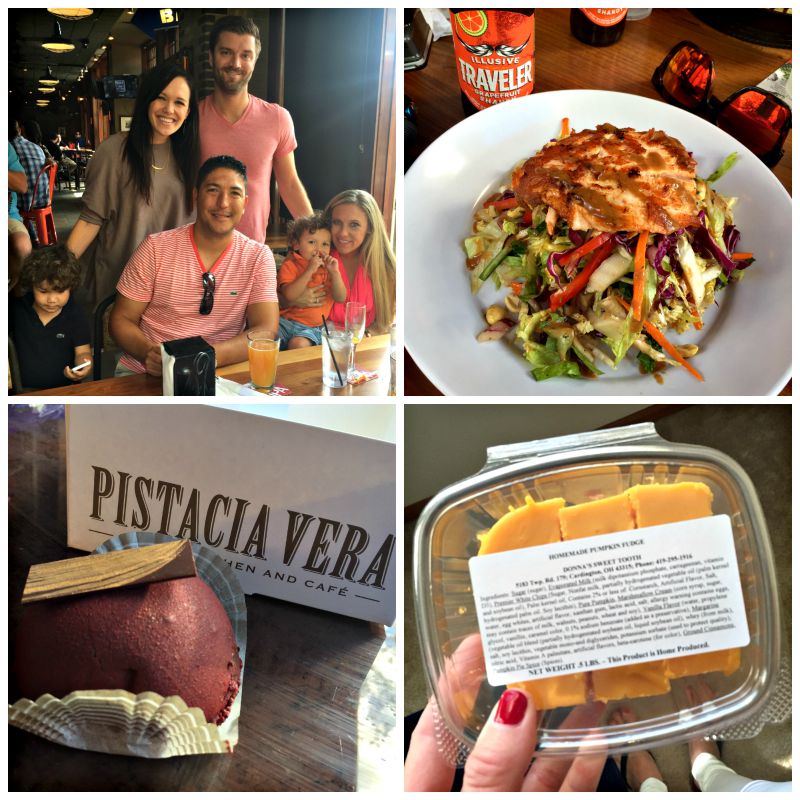 A mini-food tour of downtown Columbus was the perfect way to spend the day. Shown above is a group shot minus one baby, as well as a salad, a cake bomb and pumpkin fudge.

From there, we drove around German Village, as well as by Grant and Bre’s old neighborhood, and then we headed home to sit outside and enjoy the beautiful weather. It was in those late afternoon hours that we all got really tired and sad that the weekend was winding down. Total Sunday blues, my friends. For dinner that night, we put together a platter of bites from Kroger on the kitchen table like shrimp cocktail, cheese dip and crackers, sushi and more, then we played with the kids and watched TV on the couch, all a little bit drowsy.

There was so much more we wanted to do and see in Columbus (well, mostly restaurants that we wanted to eat at, but quite frankly, there weren’t enough meals in the day!), and the time went by far too fast. But of course, we’re so glad that we made the trip and were not only able to see Grant and Bre’s new city, but also spent some serious quality time with their little ones. Good times. Goooooood times.

On Monday morning, or rather Sunday night, Dave and I popped up before 4 a.m. to pack up and get to the airport for our ridiculously early flight. It was fairly painless, and although we didn’t sleep much, we did have the row to ourself. Once we got back to the Bay Area, I dropped Dave at work, and went home to get back into real life. Needless to say, we were totally exhausted, but really happy with the many new memories made with our besties, Grant and Bre. They are the coolest. Until next time, Ohio!

What was the last sporting event that you went to?

Have you been on a weekend getaway recently?