I’m going to make a very bold statement and say that my trip to Las Vegas last week was the best time ever. Like ever.

I’ve got to be honest, when Dave and I were planning a getaway along with our best friends, Grant and Bre (who live in Columbus, Ohio by way of Jacksonville, Florida), Las Vegas was not even in our top five of desired exotic vacations. Dave and I had both been a couple times before, and it just seemed so close. But due to the time we had available, distance between our home-bases, travel and a few other circumstances, Las Vegas is what ended up as our final destination. And don’t you know it also ended up being the absolute best place ever for us to hang out and was everything we wanted and way more. That just goes to show it’s all about the people you’re with. 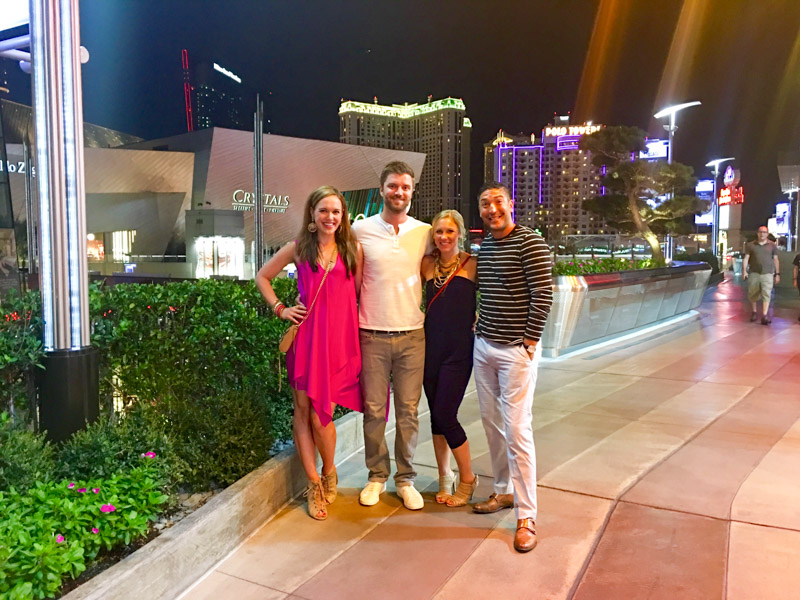 (My dress and my shoes)

Highlights from our Las Vegas adventure

While I definitely can’t go back and retell all of the stories from our five days and five nights. I’m going to share a few highlights. Let’s do it …

Yes, I met Britney Spears, and yes, I’m a big fan. Perhaps not as much as I once was, because I was absolutely obsessed with her in high school. For instance, my 18th birthday present from my parents was tickets to see Britney in Tampa with all of my girlfriends. We rode in a limo and wore matching t-shirts with Britney’s face on them. But I digress … over the years, I’ve remained a Britney fan and meeting her did not disappoint. 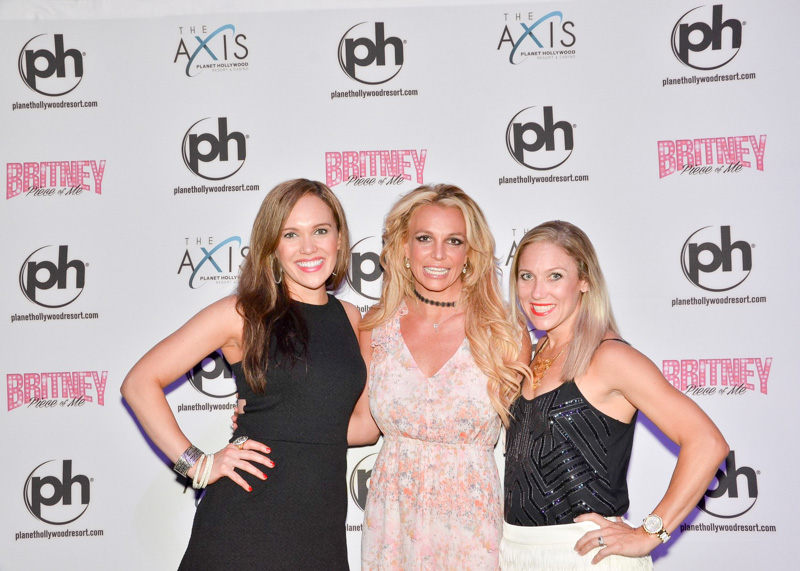 Britney performs twice a week at Planet Hollywood, and we went to see her “Piece of Me” show on the first night we were all in Vegas. Bre and I were lucky enough to be part of the meet and greet group, and so we went to the show about an hour early for the big event. We stood in line behind the concert venue with about 20 other people, were patted down, gave up our bags and phones, went through a metal detector and were given many, many rules about what we could and couldn’t do when it was our turn to meet Brit. We got the run-down from Britney’s long-time assistant, Felicia, who goes by the name of “Fe,” and whom I remember from Britney’s documentaries back in the day, and she was the sweetest.

When we met Britney, we had less than a minute with her, but it was awesome. She was little, super fit, soft-spoken and quite friendly. And she told us that we were pretty two times while we chatted and posed for a picture with her, which was something we reminded each other of the rest of the trip (and yes, she probably says that to everyone, but we’ll never forget it happened to us). Before the meet and greet, Fe told us that Britney was actually very shy, so it was up to us to bring the energy when meeting her. I’d say we did, because it went well. Funny to think a big star like Britney would be an introvert, but it happens.

The concert itself was super fun. It was basically like a big dance party and we didn’t actually sit in our seats for one minute. While Britney probably didn’t sing anything live, it didn’t matter at all. The music, dancing, effects and performance were spot on.

We spent a ton of time outside during our Vegas trip, even though the temperatures were hovering around 100 degrees. It was dry heat, so it didn’t seem that terrible. Other than walking the Strip no less than five miles a day, we also set out on an official hike on our third day. We rented a Mustang convertible and drove with the top down the 20 minutes or so to the Red Rock Canyon National Park for a three-hour hike, which was actually pretty challenging. 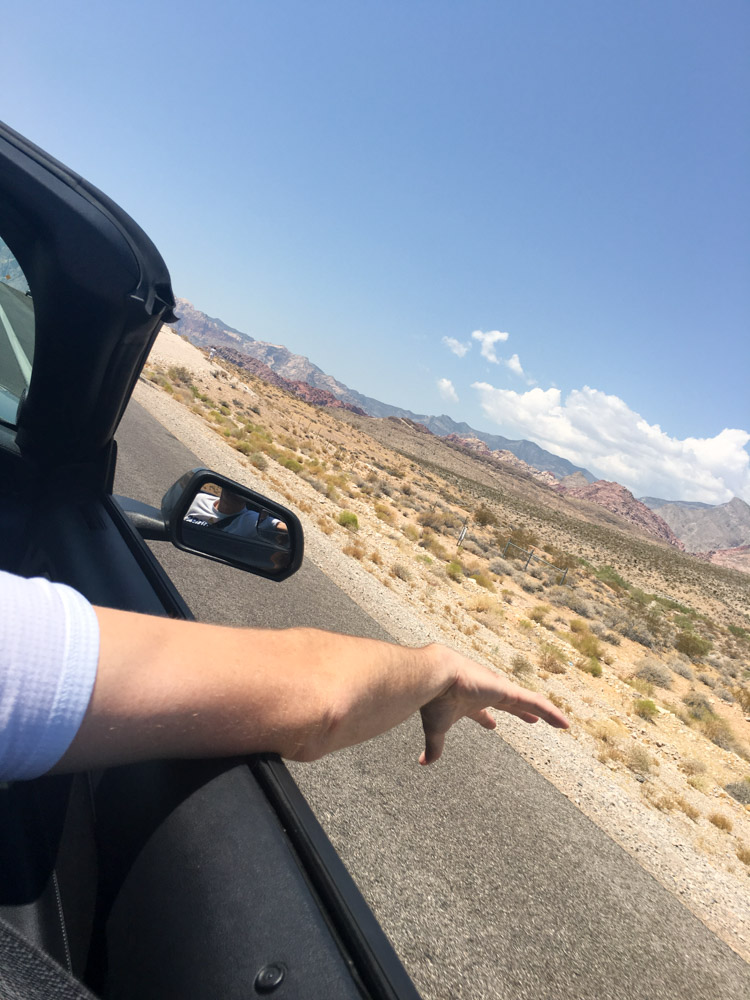 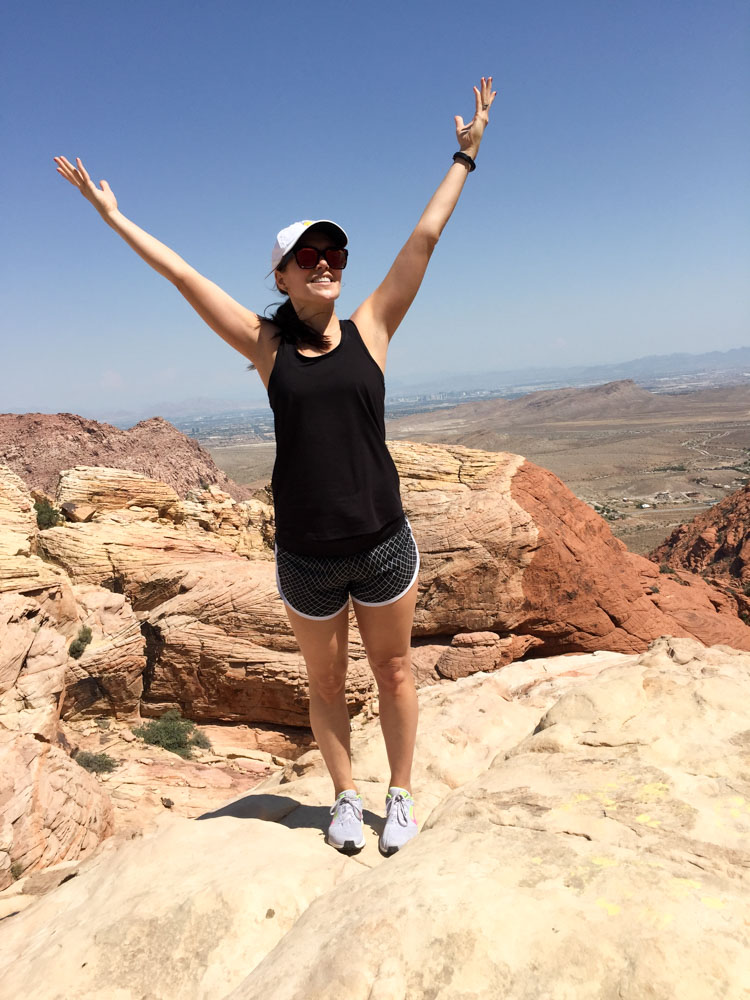 There wasn’t a super specific path, so a lot of times we were just guessing that we were on the right route to the top of the rocks, but that didn’t stop us. We decided to make up names for each other during our hike, and my name was “Scoots with Butt.” Why? During the particularly steep parts of the rocky climb, I would sit down before moving my feet just to be safe — so don’t you know — that became my name. I can’t tell you the names of the other friends, because this is a family blog. 🙂 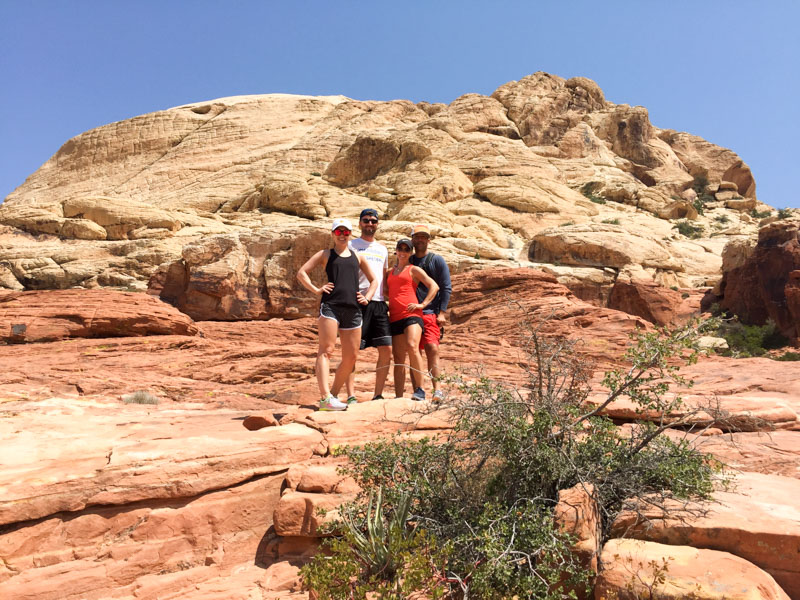 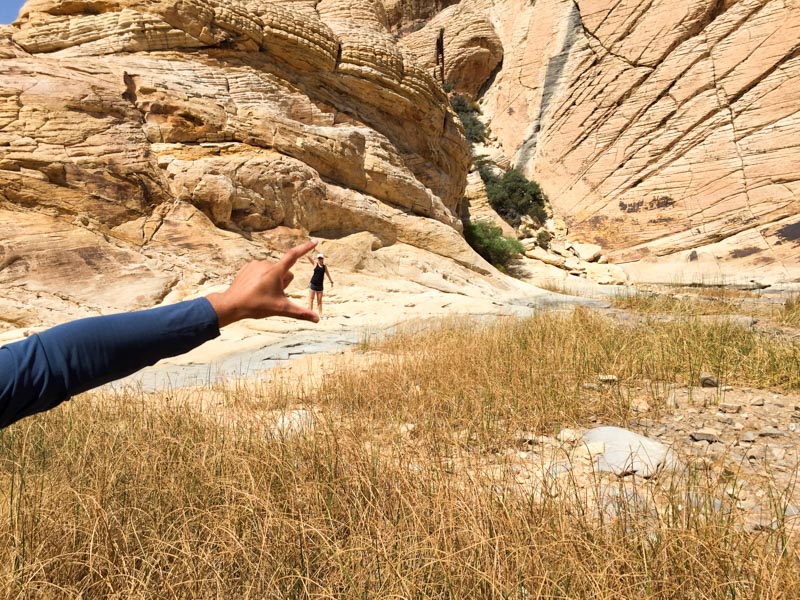 Dancing the night away at Hakkasan

I really have no idea how long it’s been since I’ve been inside a night club. And boy, it was good to be back. We had all decided that we wouldn’t mind spending one night of our vacation out dancing the evening away, and it ended up being even more fun than expected. Like way more fun. In fact, it may have been our most favorite night of the trip. After a fun dinner at Sake Rok, we showed up to Hakkasan club, which just happened to be in our hotel, the MGM Grand. Amazingly enough, through Dave’s connections, we got hooked up with a VIP table and service for the night, so we were able to dance in our own section and avoid the crowds. The best thing about going to a club? It gave me an excuse to wear this little sequined number from Rent the Runway (referral link — just do it!). 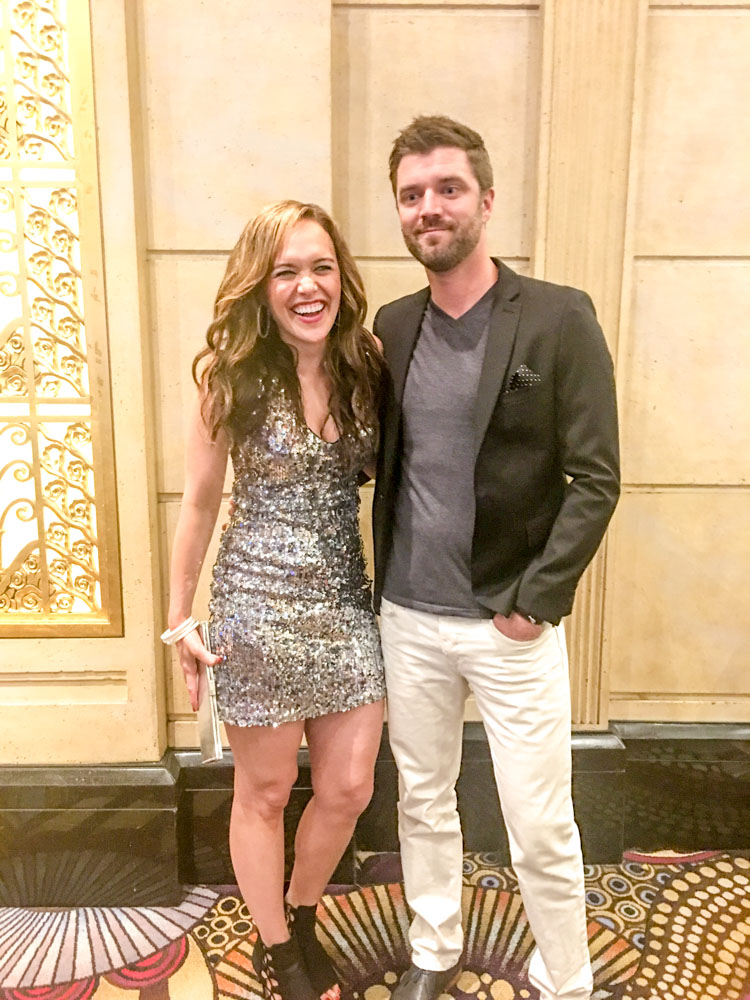 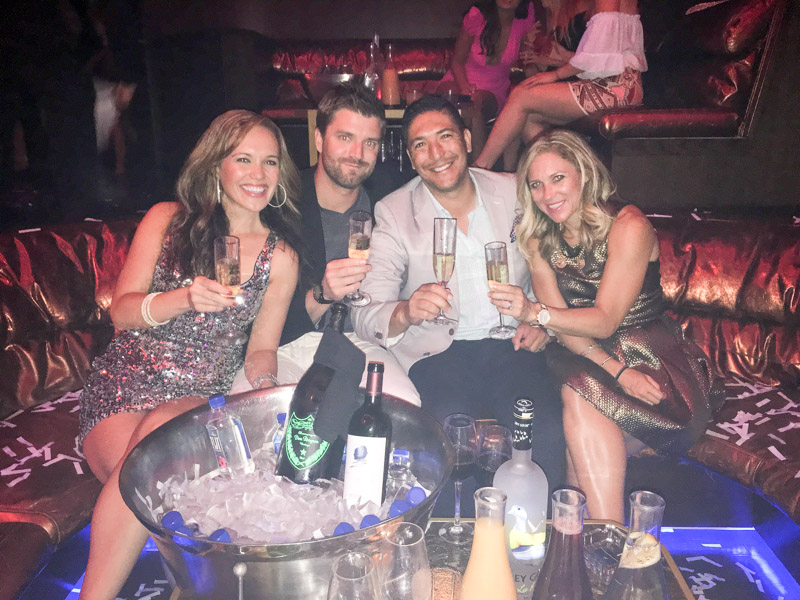 The DJ of the night was DJ Borgeous and he played all the sweet techno tunes to keep us moving for hours and hours. I really can’t describe the glitz, glamour and awesomeness of this night, especially because we had NO idea we would get such great treatment from the club. Oh yeah, and Lil Jon made a surprise live performance appearance too and did his classic “Turn Down for What.” Yup.

Eating, eating and eating some more

I don’t think I reached the point of hunger one time on our trip to Vegas. From brunch, to snacking, to lunch, to beverages to dinner (to the occasional late-night slice of pizza with a garlic knot), we had the best food. So much so, that I can’t cover it all. We hit up a few celebrity restaurants, a crappy buffet at our hotel (which was disgusting — but well-priced), lots of fresh fruit and had our fair share of junk. 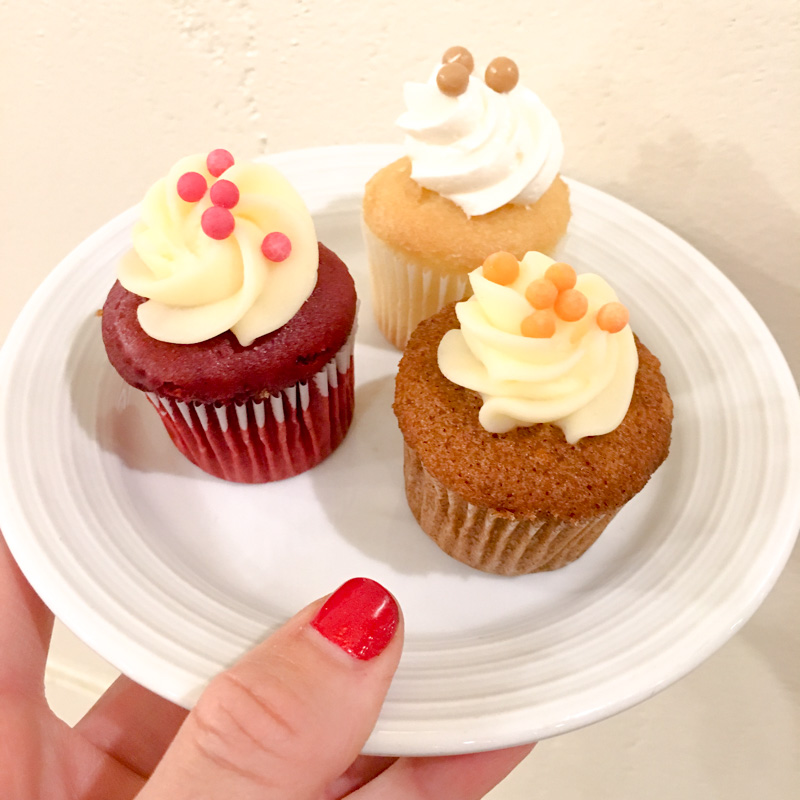 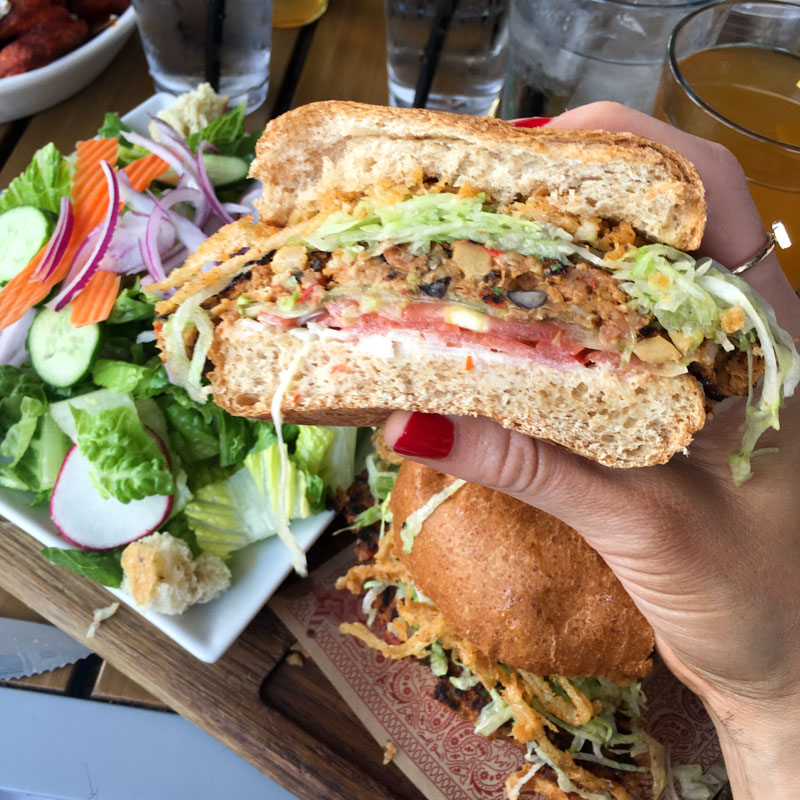 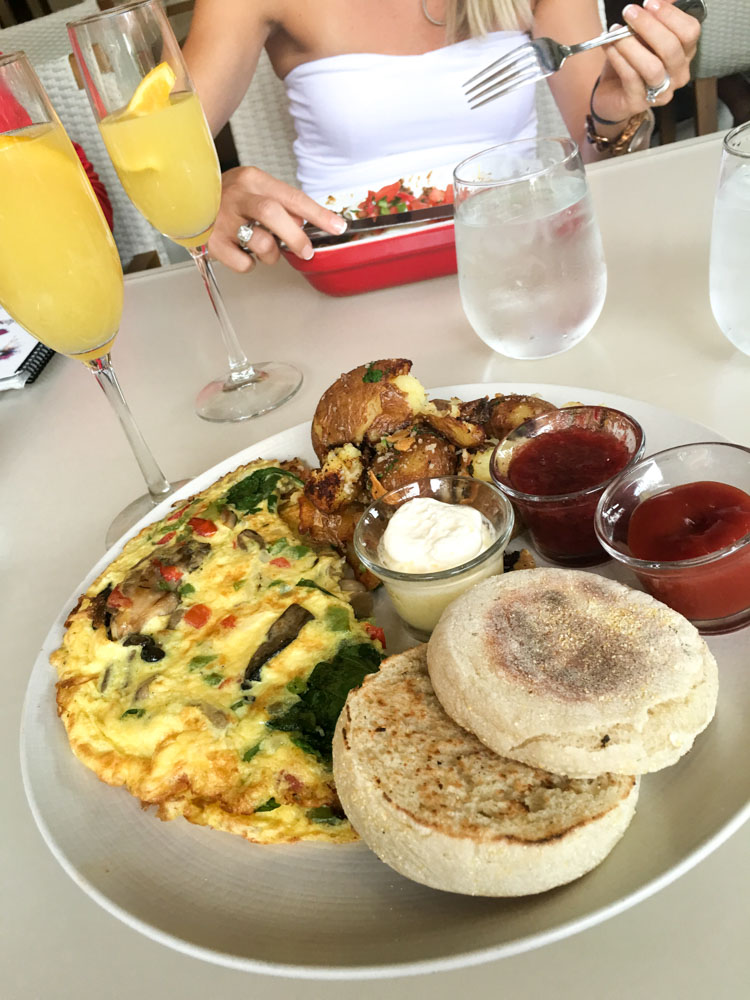 My favorite meal? Either steak at Bobby Flay’s Mesa Grill or brunch at Hexx Kitchen (shown above — the best English muffin ever!). By the way, Dave ordered the chicken and waffles at Hexx twice, and I had some bites both times. To die for.

Helicopter ride and Elevated Yoga on the High Roller

Did you know there is so much to do in Vegas that doesn’t take place in a casino? So true! During our trip, we had the awesome opportunity to go on a helicopter ride above the Strip with Maverick Helicopters (thanks for the media rate for our group!) and take a nearly private yoga session while riding around on the world’s highest observation wheel. This was my first time on a helicopter, and it was actually a little scarier than I expected. We wore headphones to communicate mid-flight and loved our 15-minute cruise above the City, expertly guided by a young pilot. We definitely felt cool. 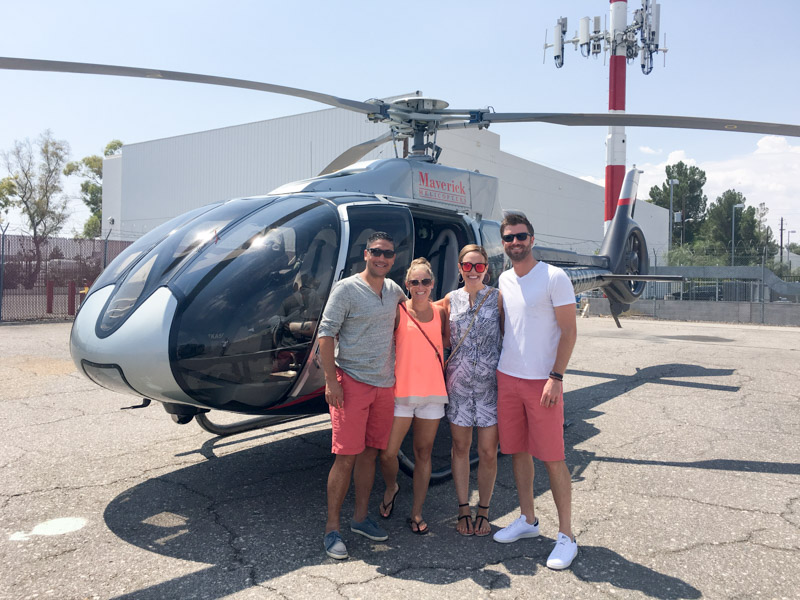 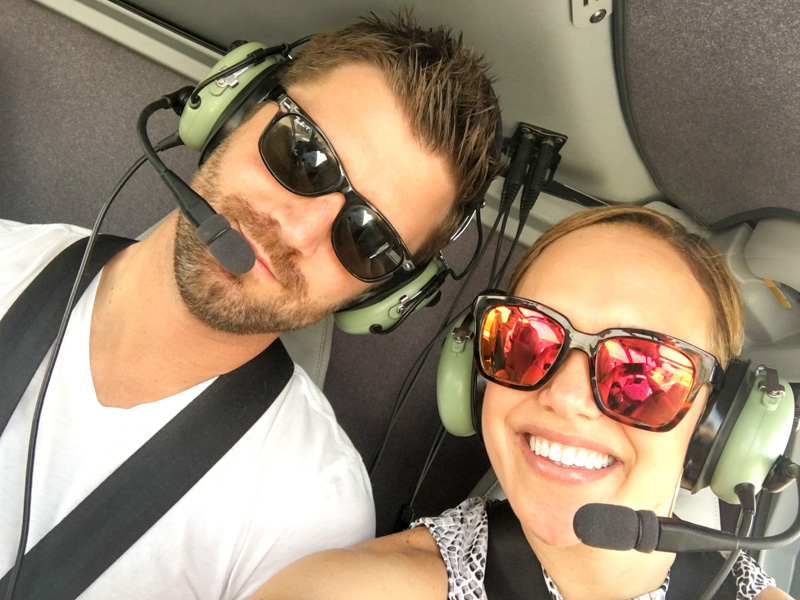 And as far as yoga is concerned, it was just the most rejuvenating and peaceful thing you could imagine to do on the last day of our trip. Bre and I broke off from the guys for this experience (thanks for hosting us for free, LINQ), and we enjoyed two rotations around the big wheel, which took us 550 feet above the city. Our instructor was incredible, and she gave us plenty of time to pose for pictures in between our light and gentle flow session. 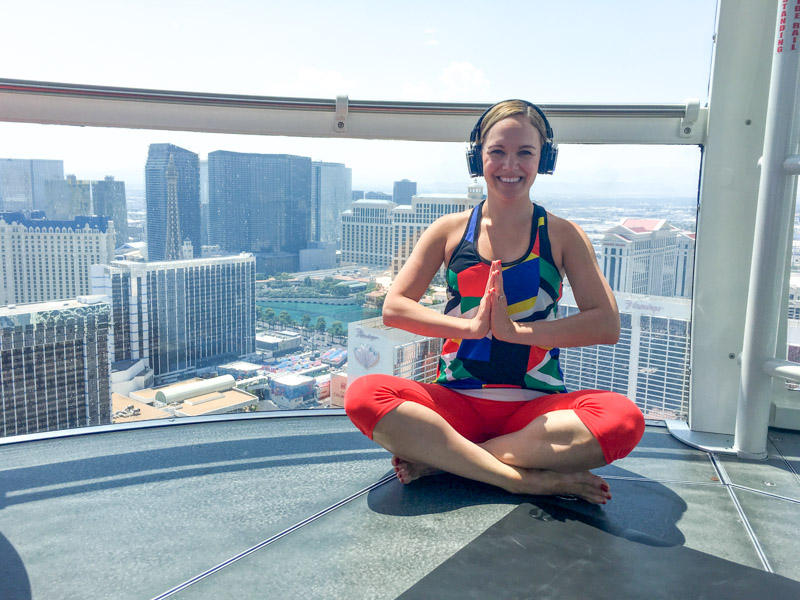 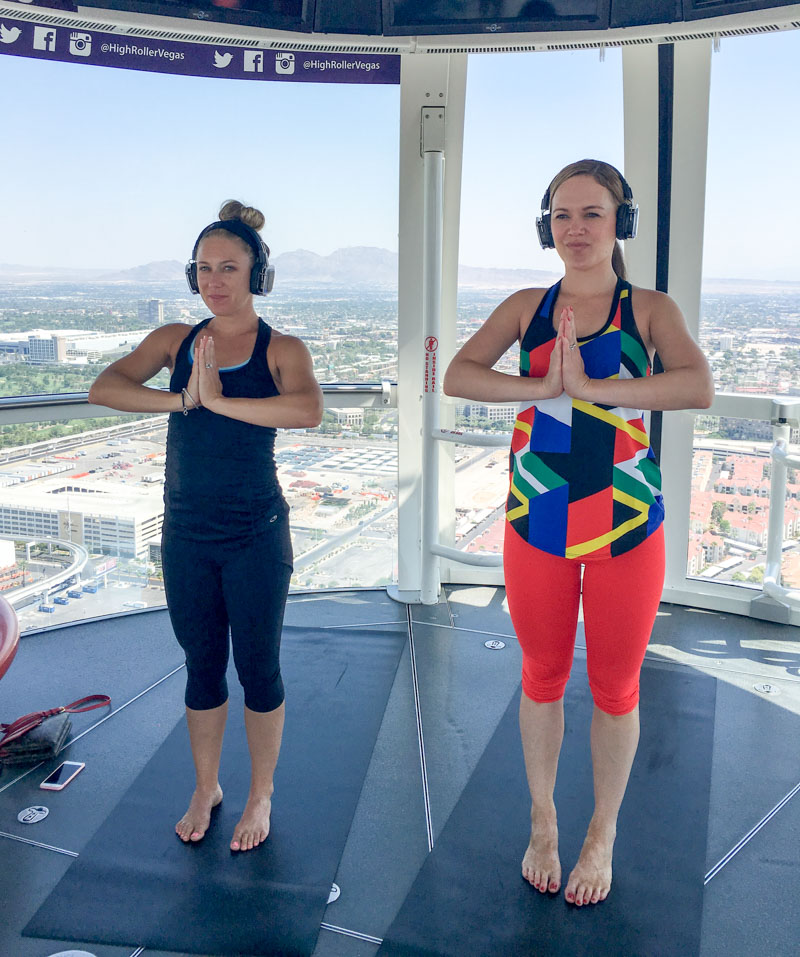 (My outfit is from Fabletics)

The experience normally costs about $75 per person. And because it’s so incredibly different, I would highly recommend it for your next Vegas adventure.

Even though we got to do some pretty cool activities in Vegas, the reason it was all so fun is that we were all four together. From the moment we woke up, until we went to bed late each night, we were laughing. We really were. 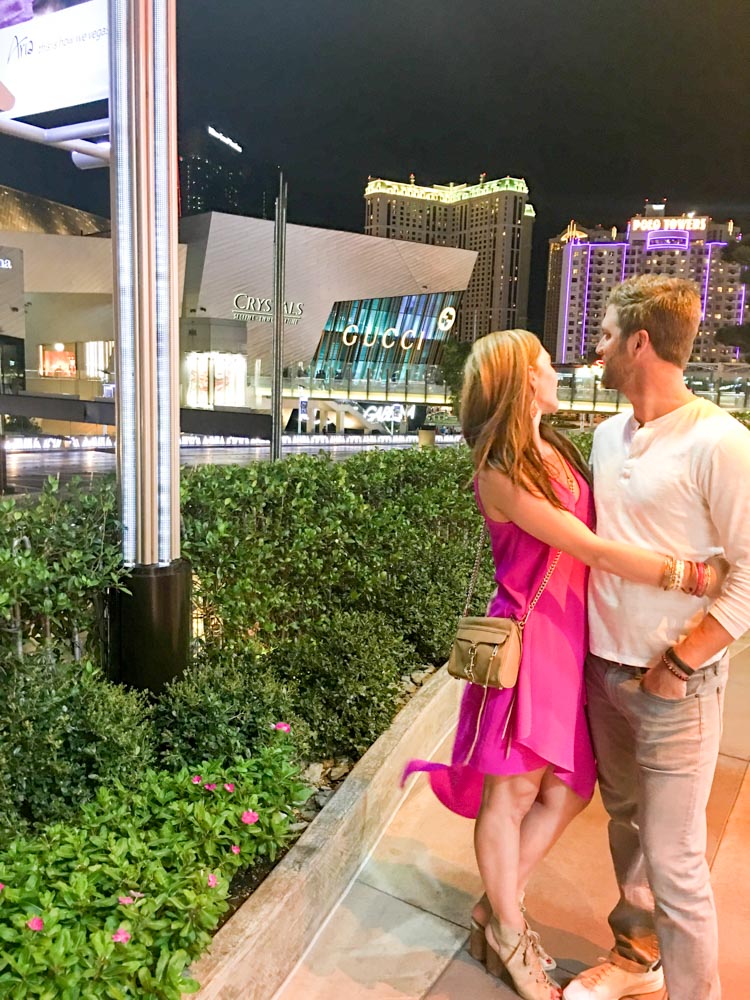 Funny things? We each had different song lyrics in our heads the entire trip that would get blurted out — sometimes improperly — especially this one. We also were no stranger to pulling out the iPhone for an impromptu game of “Heads Up” at the table at a restaurant or even in the swanky Chandelier Bar of The Cosmopolitan Hotel. And we started most nights in the hotel room (they came over to our room each night, because we had a suite), playing a quiz card game. Overall, very few serious moments occurred, which is just how we like it. 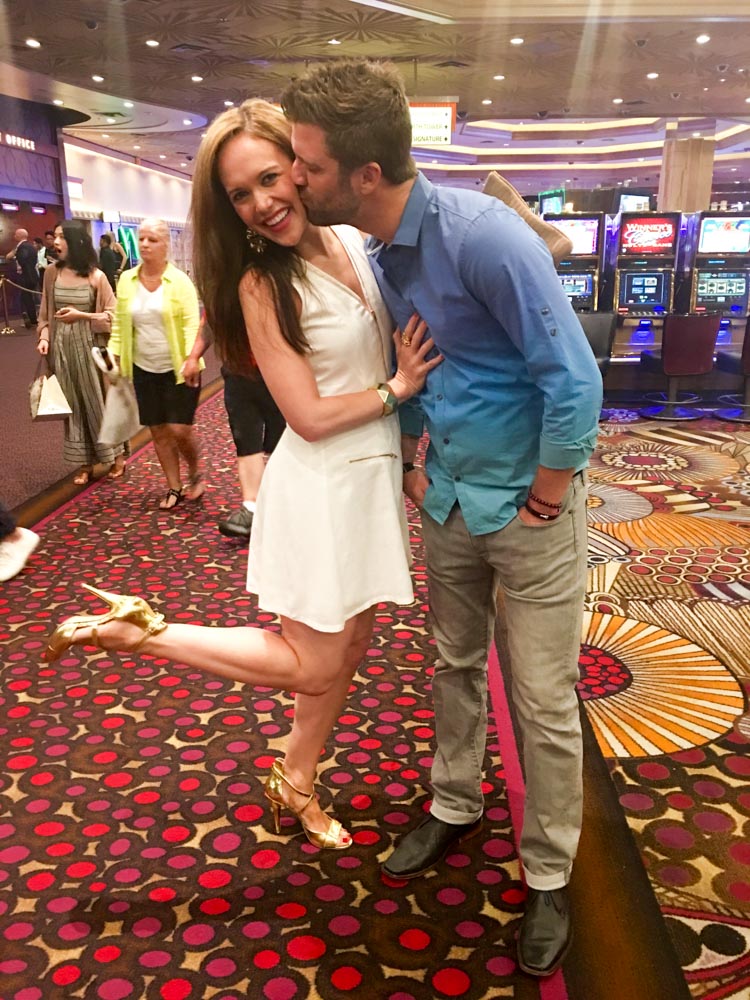 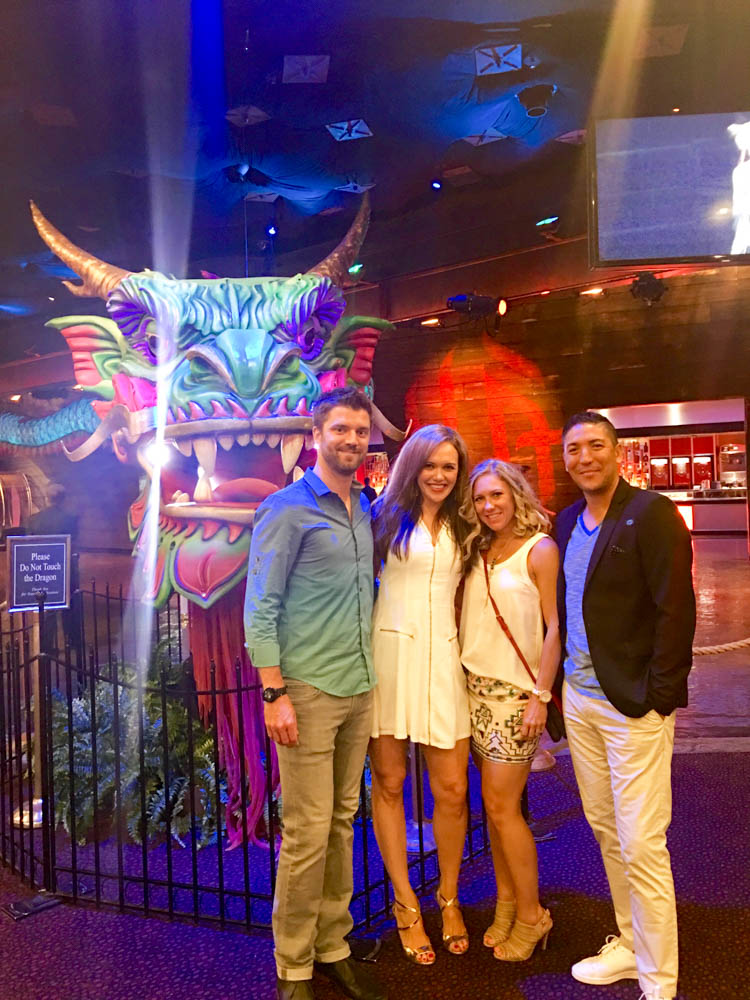 (My dress is from Golden Tote and here are similar shoes)

I keep thinking about what a great time this trip was, and I’ve basically run out of adjectives to describe it. Both Dave and I were in serious need of a getaway and a little time to unplug. So although I had one post scheduled to go up on the ol’ blog while we were away, I remained off social media, outside of the sporadic post. I didn’t think about work, life, workouts, blogging, or really anything but the friends I was with in the moment I was in. I didn’t come back with a tan and didn’t buy a single souvenir — but the photos and memories will last and last — and that is what made this the epitome of “vacation.” 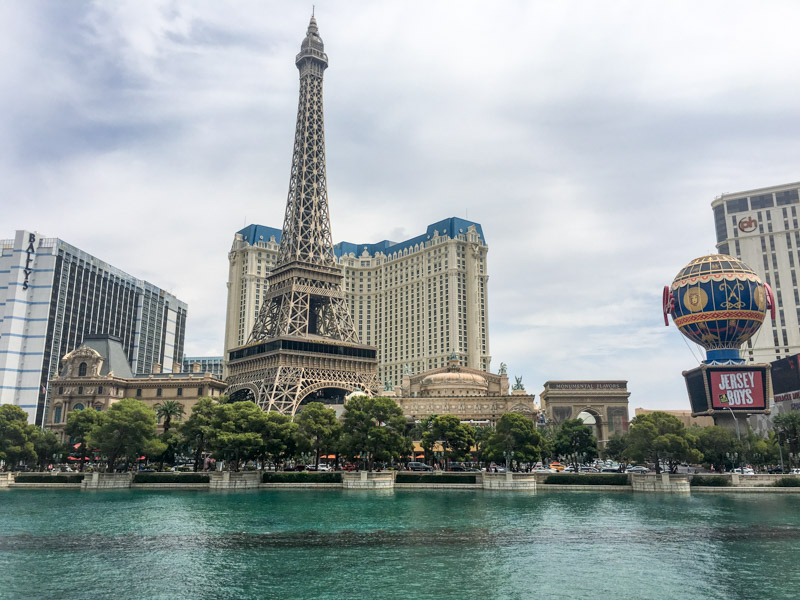 Have a fabulous day, friends! If you’re having a rough one, turn on a good song and shake it off. Take it from me, there’s nothing a little dance party can’t fix!

Britney Spears, yoga, hiking and clubs. Read more about #LasVegas fun and get some trip ideas from @apstyle ... Click To Tweet

Have you ever met a singer/celebrity? What was it like?

What was the best trip you’ve ever taken and why?