After spending several days exploring some beautiful parts of California, it was a bit of a rough entry for Dave and me as we drove back into San Francisco yesterday afternoon. The path to our apartment from the freeway goes through some of the less-than-pretty neighborhoods, and we were welcomed by honking horns, crowded streets and foggy skies. But once we walked back into our little apartment, we quickly got reacquainted with our urban existence and are back up-and-running in the real world.

As I always do, as soon as we got home, I unpacked, caught up on my some emails, ordered our groceries for the week, prepped some overnight oats, paid our rent, checked the mail, and began learning the choreography I was planning to teach at BODYATTACK last night. Next thing you know, I was off to teach, had a great turnout in my class and was home foam rolling and preparing a healthy dinner by nightfall. Just like that, we were done with our vacation and into our routine. It felt pretty good to have a decent sweat session and a healthy home-cooked meal in me after several days of true indulgence and rest.

It’s safe to say that Dave and I had a truly fabulous few days away. We slept a lot, we ate a lot, we spent a lot of time with family, and we saw some new areas of the state. But of course, it went by way too fast. The good news is that we have less than three weeks until we leave for Florida, which will be a trip full of seeing friends, hanging out with my parents and brother and doing a lot more relaxing.

Now let’s back up and recap some of the fun from the past few days, and then I’ll get to my December plan and goals …

On Wednesday morning, Dave and I drove to San Diego from San Francisco. We hit some major traffic on the way down around L.A. and so it took about 11 hours door-to-door, with a couple of potty breaks and a lunch stop. We’ve been told that there is always traffic in L.A., and we experienced it on the way there and back at totally different times of day, so I guess we were told right. Nonetheless, we arrived at Dave’s parent’s house on Coronado, which is an island off San Diego, just in time for dinner. Three of Dave’s four sisters were already there when we arrived, so we had a full house from the outset. 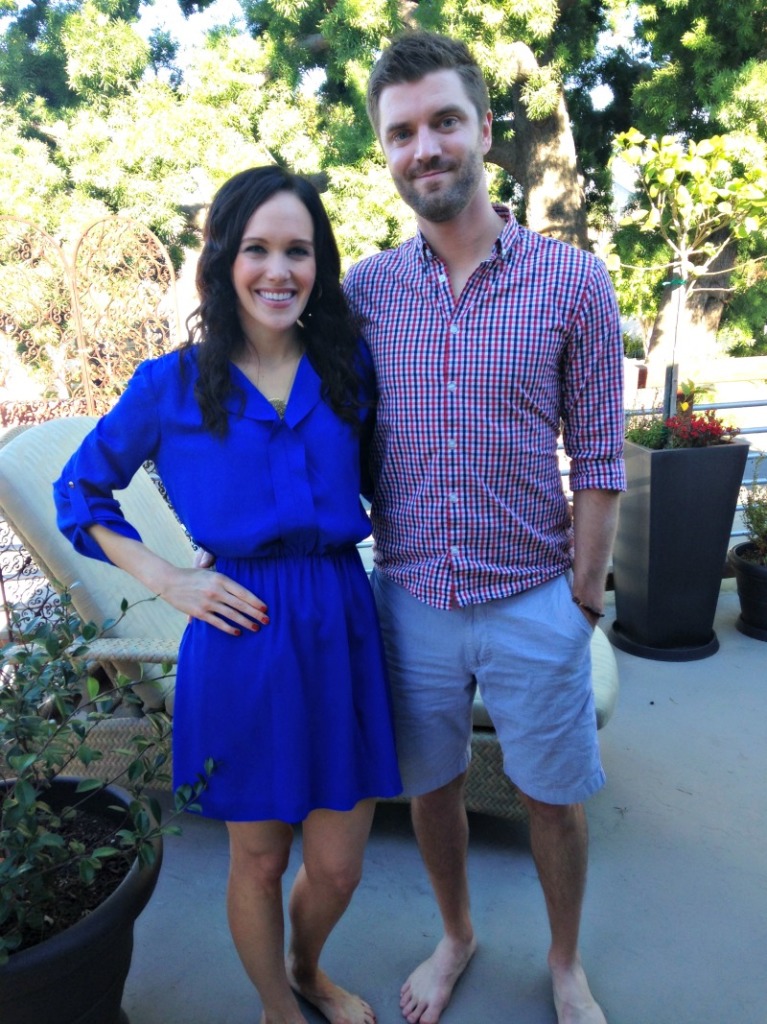 Do you know how many bad photos it took to get this one semi-decent one? A whole lot.

On Thanksgiving morning, we ran a crowded, but fun Turkey Trot, which I fully described here, and I was really happy with my race time under 24 minutes. The rest of Thursday was spent hanging out at home, chatting with some guests, feasting, going on a night-time walk, playing charades and indulging in some major dessert. 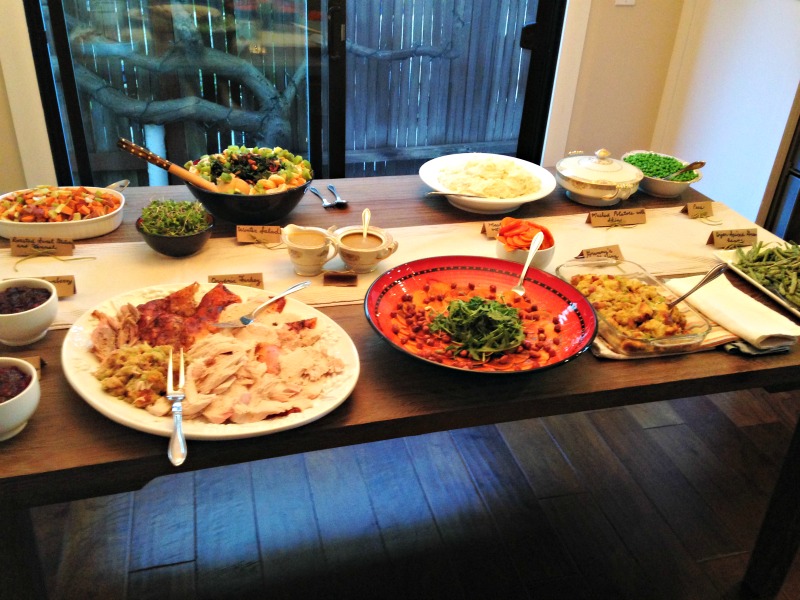 A look at the spread of food we dined on, all labeled with hand-written note cards. 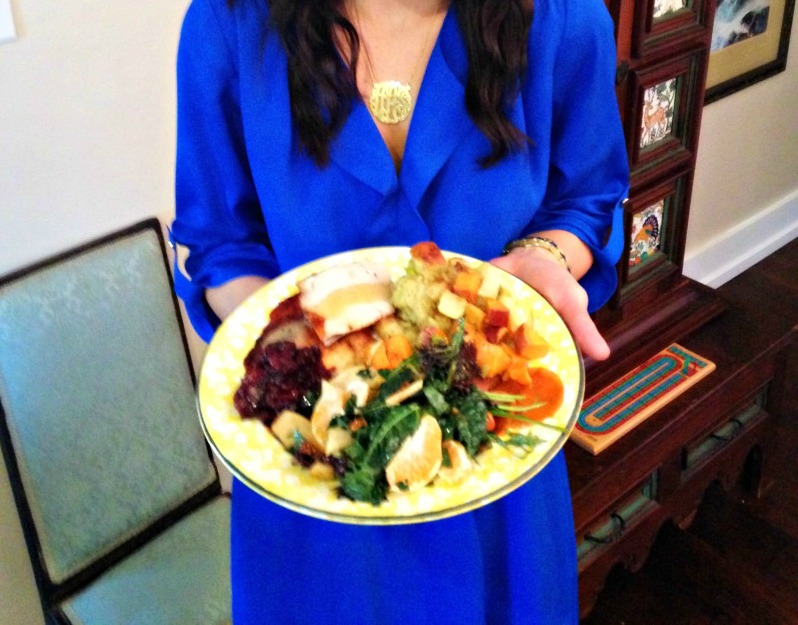 That’s me proudly holding my first helping. My favorite thing on that plate? The roasted sweet potatoes for sure. But the turkey, stuffing and cranberry sauce were also exceptional. 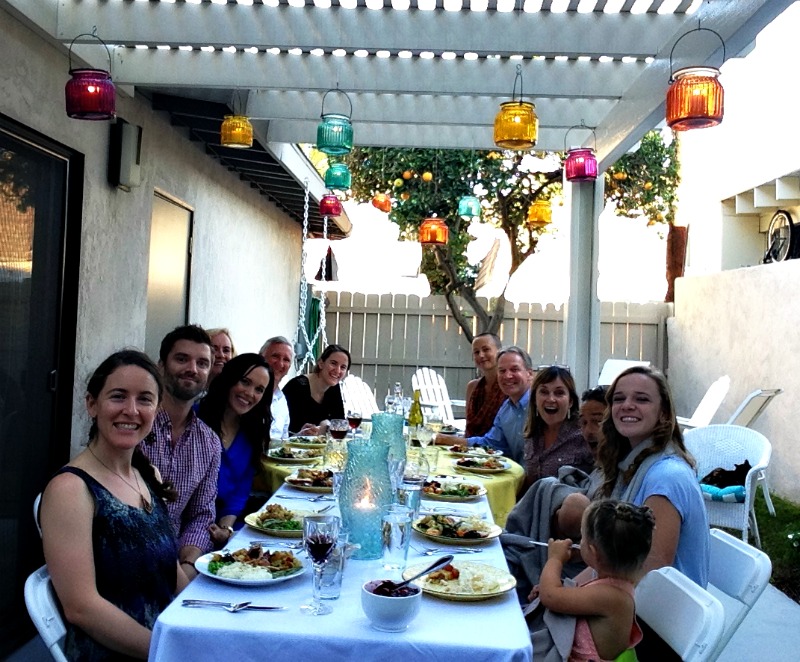 Our group sitting down to dinner on the back patio. This shot was taken with a self-timer on an iPhone, so I’d say it’ turned out pretty good.

On Friday, Dave and I went on a very short little jog to the beach and then explored the Hotel del Coronado and downtown Coronado. We walked through the gift stores, grabbed a beverage at Starbucks and then went home to hang out some more, and I took a little nap. The best part about Coronado, outside of the nice weather and views of San Diego and the Bay, is that the entire area is walk-able. We really liked looking at all the lovely homes lining the streets as we made our way back to his parent’s house on foot. 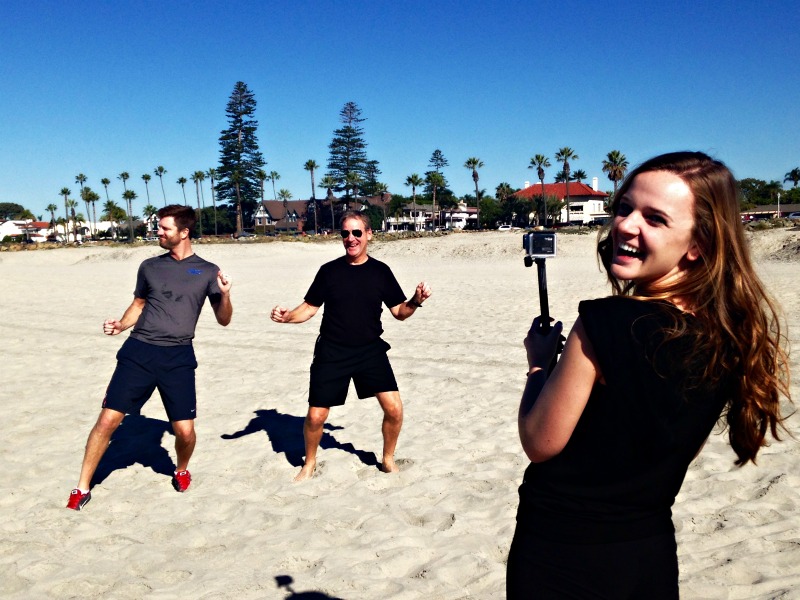 During our stop at the beach, Dave and I participated in a family video project. Shown above is Dave’s younger sister Gwena filming the guys in one of their segments. Believe me, I’ll share the finished product, because it’s going to be good.

In the afternoon, we went with Dave’s Dad to lay by the pool at the Loews Hotel, which is where Dave’s parents keep their boat, so we had access to all the amenities. The pool area was super relaxing, and we even took a dip in the hot tub.

During the day on Friday, two of Dave’s sisters left, so by the time dinner rolled around, there were only five of us. That night we went to Miguel’s Cocina for a nice Mexican dinner. After dinner, we stopped for dessert and went home to watch some hilarious home movies of Dave and his sisters when they were growing up in Maine. I laughed so hard my face hurt. It was such a good time seeing Dave as a little kid and watching how he interacted with his house full of sisters as the only boy. (Yes, growing up this way has made him as patient as a saint and given him many other admirable qualities!)

On Saturday, one of the few Saturday mornings in the past year and-a-half when I didn’t have to get up to teach a class, we took full advantage and went to brunch. Sadly, I had a very disappointing salmon and egg scramble that morning, but it was still nice to be out for the first meal of the day. After brunch, I went on a little stroll with Dave’s Mom and sister and we ended up at the Coronado Ferry Landing area. 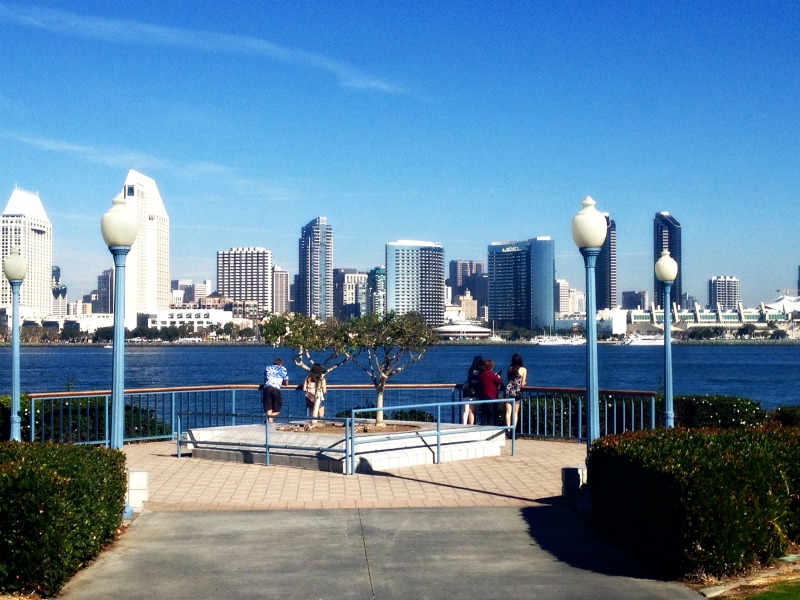 A view of San Diego from the Ferry Landing in Coronado.

The rest of the afternoon, we laid around watching some football and relaxing. Before we left for L.A., we made one final stop in Coronado, which was in search of an acai bowl. I had mentioned several times that I was dying to try an acai bowl and knew that San Diego had them allover. We stopped at Clayton’s for my bowl, and it was not quite what I expected. In fact, it was food fail numero dos of Saturday. 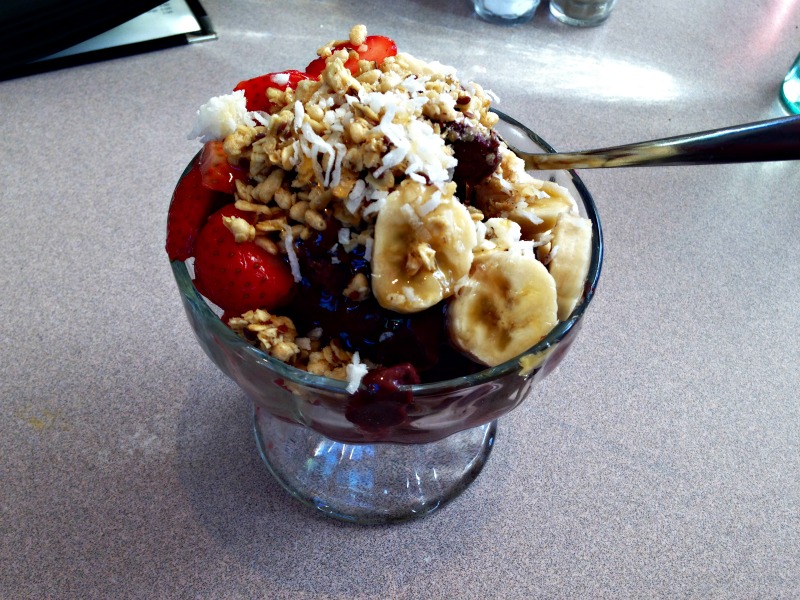 Yes, it looks lovely. But I thought it would be more of a smoothie bowl, with a yogurt consistency. Not so much. This one was actually more of a frozen-yogurt sundae with rice krispy granola on top. It was not exactly the healthy parfait I had envisioned. Still, I ate it all, and it filled me up for the drive. Once I finished, we said goodbye to Dave’s Dad and hit the road to head north to L.A. for the next leg of our journey.

A quick overnight stay in the City of Angels

Our drive to L.A. was pretty easy, apart from some traffic, and we ended up at Dave’s sister Jess’s apartment around 6 p.m. Jess has lived in L.A. for three years and owns a very cute one-bedroom condo in a neighborhood of L.A. I had never really been to the area before (outside of a trip to Anaheim when I worked at Disney), and was very impressed with all the different restaurants and look and feel of it all. We went out to dinner at a trendy spot called Mohawk Bend just a couple minutes from her place, and the scene was good. I mean, the beautiful people were dining at this place. In fact, the restaurant was full of all young people with no kids, much like dining out in San Francisco. Although the scene was superb, our meal was not so wonderful. We had a fairly tasty beet tartare, a super-delicious kale salad, but our pizza was just eh. We shared all three items and all agreed the pizza was not up to par. Lately, Dave and I have been worrying that we’ve become a bit food-snobby due to all the good eats we have in San Francisco. I can’t really confirm or deny that, but I do know I encountered some less-than-fabulous meals during this trip. Yet, I also encountered some great food too. 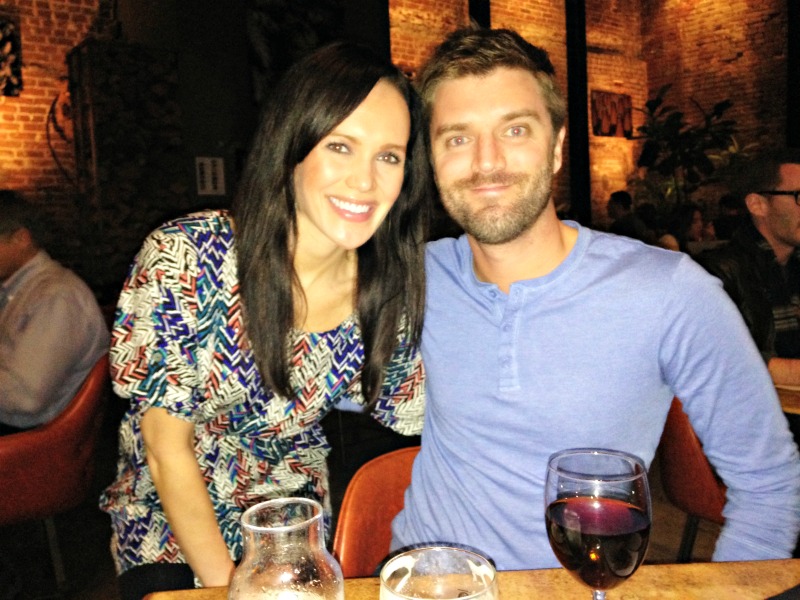 Dave and I enjoying our first dinner out in L.A.

Not to worry though, because the night was saved. We ended up stopping by Alcove Cafe and Bakery for one of the highlights of my trip — a slice of blue velvet cake, which I ate all by myself after we got back to Jess’s place. I made it a point to have a hearty and decadent dessert every night we were away, and this was my favorite one, which you may have seen when I shared a shot of it on Instagram on Sunday morning. 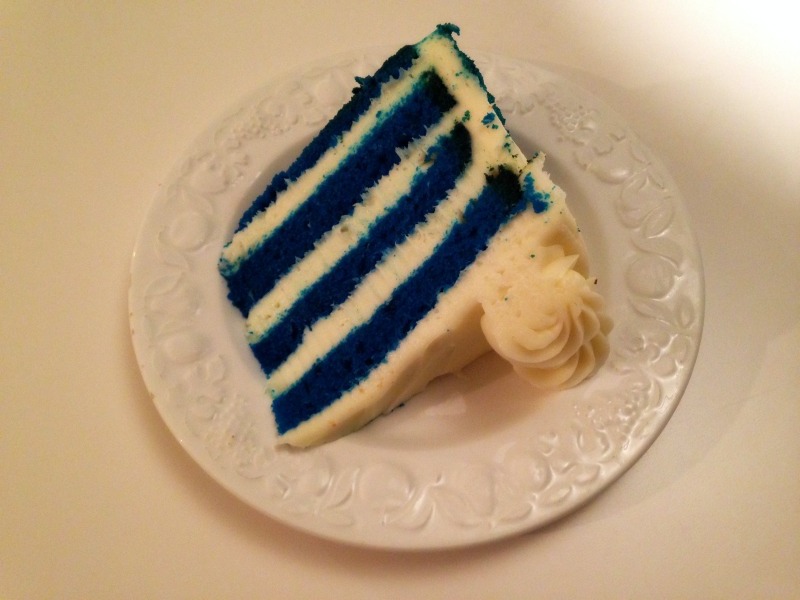 I will dream about this most-amazing thing for a very long time.

We went to bed pretty early that night, so we could head out early the next day. On Sunday, Dave and I made the five-hour trip to Carmel, which I’ll give you the full low-down on later this week. But that’s the story on our weekend happenings up until we arrived in Carmel.

Switching gears, because it’s the start of the last month of the year, I thought I’d talk about some of the big things ahead for me and my goals for this month.

Here’s what is ahead for me for December …

I think I can do these, guys. But this month is going to fly by, so I better get started on all of the above. And in honor of all the treating I did over the past few days, I’m linking up with Becky for “Treat Yourself Tuesday.”

That’s all I’ve got for you today, friends. Have a fabulous Tuesday, and I’ll see you soon.

Do you have any goals for December? What are you looking forward to this month? Have you ever visited Southern California? What was your experience?