For those of you who don’t know, I was born and raised in Florida and lived there until two years ago. That’s when my husband, Dave, and I packed up and went west.

When we first moved to San Francisco, we would spend every single weekend exploring new restaurants, parks, festivals and attractions, as well as getting out around the Bay Area to see what there was to see. We hiked to the top of mountains, visited lighthouses and even picnicked above the redwood forest. (If you’re wondering some of the best ways to experience this city as a visitor, be sure to check out my list of the Top 10 things to do in San Francisco.) 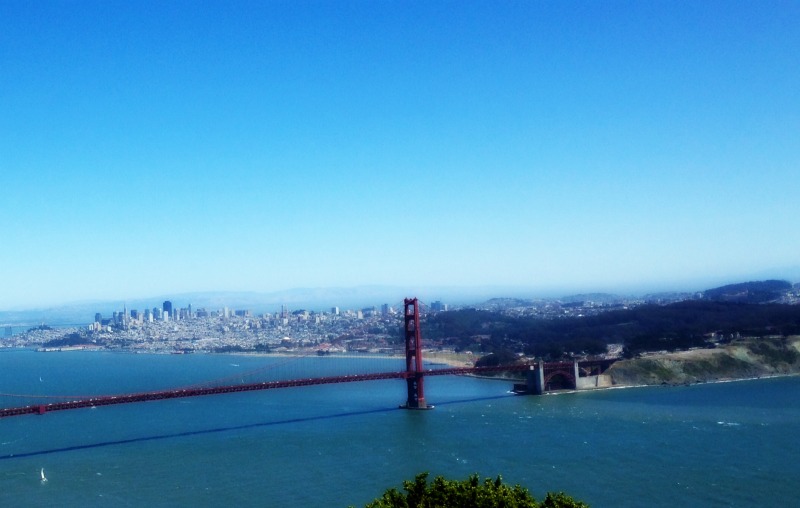 A view of San Francisco from Marin County across the Golden Gate Bridge.

However, as the months went on and we got into a more normal routine in San Francisco, our adventures pulled back a bit. One year ago, I started teaching regular group fitness classes on Friday nights and Saturday mornings, which meant we’ve been tied to the City until at least noon every Saturday. We’ve managed to make a few day trips here and there, but overall our excursions have been less regular. We’re still really good at trying new restaurants every single weekend, but we’ve slacked on the day-time fun department.

That’s about to change. There are endless things to do every single day and weekend around the Bay Area, and we’ve (I’ve) decided it’s time to take advantage of all of it. I don’t plan to be out gallivanting on weeknights, but I do plan to get off the couch on Saturday afternoons (as much as my post-BODYATTACK body wants to stay there) and embrace the urban setting and culture a little more like we did when we first arrived.

And we got a jump-start on that mission last weekend.

On Saturday, as soon as I got home from teaching, I showered up and we headed out to a festival. This was one of those oh-so-San-Francisco events called Tour de Fat, which took place in the huge Golden Gate Park across the City.

Ladies and gentlemen, this was a strangely entertaining activity. Tour de Fat is hosted and sponsored by New Belgium Brewing, the folks who make Fat Tire beer, and it happens each year in 10 major cities across the U.S. The event tagline should give you an idea of what you’ll find there: “Bikes, Beer and Bemusement.” Why, yes indeed.

As expected, attending this event made someone very happy … 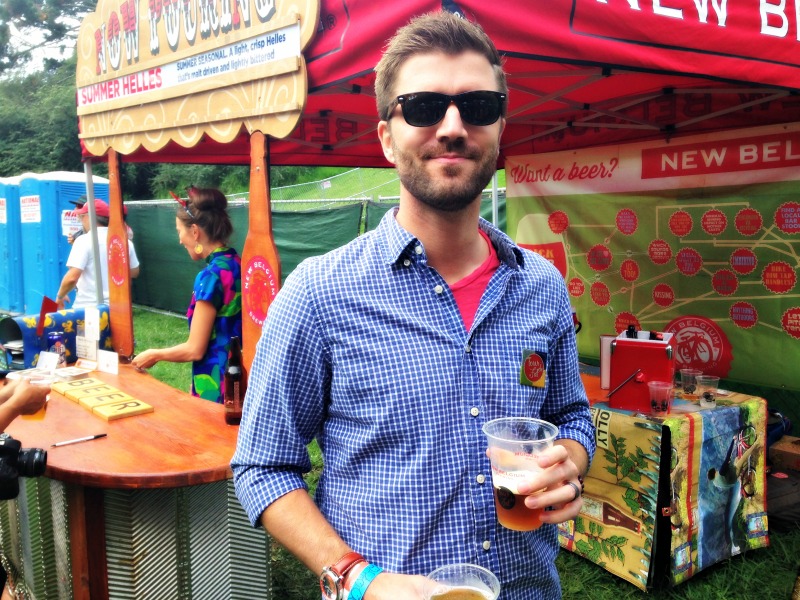 The event itself has a great message. It’s all about bikes and bike safety awareness, which is incredibly important in a city like San Francisco where bicyclists have had some issues in traffic. But to showcase the message, the New Belgium people offered weird carnie fun. There were life-size board games, hula hoops (which I definitely did, although that picture will not be making the blog) and all sorts of odd carnival-themed entertainment, as well as food and plenty of beer. While we didn’t watch any of the bands, we did catch the tail-end of a dance contest, in which someone shook their booty to win a nice bike.

Because Dave knew the organizers, we got some free stuff, had access to the VIP area and even got first-dibs on seats to see a funny little magic show. 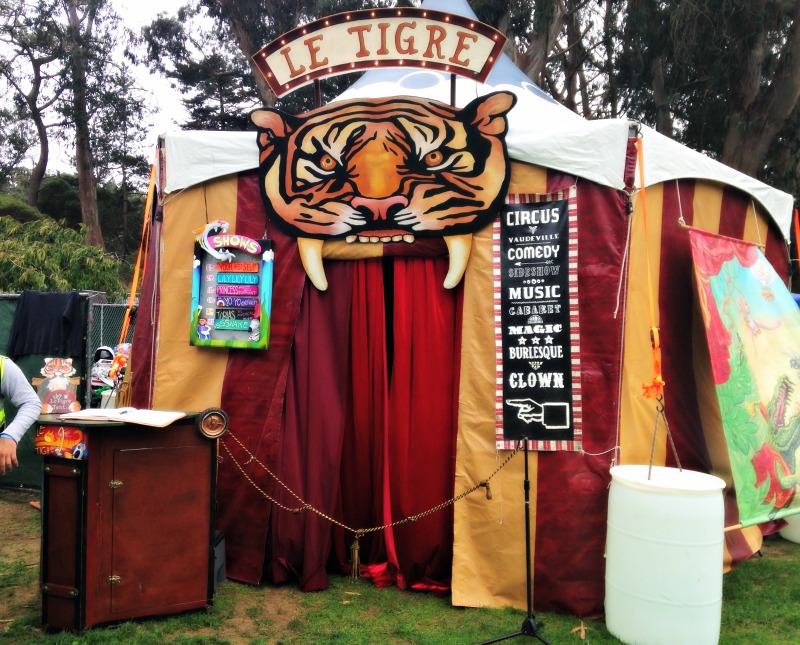 A tiny little tent where the magic show took place.

The people watching was nearly as good as the City’s crazy annual Bay to Breakers event that Dave and I participated in May with some friends. There were tons of people in costumes, tons of hipsters, bikers, hippies and some average Joes like us. And although I’m not much of a beer drinker, I can never turn down a cold light beer at a festival in the park. When in Rome, my friends … 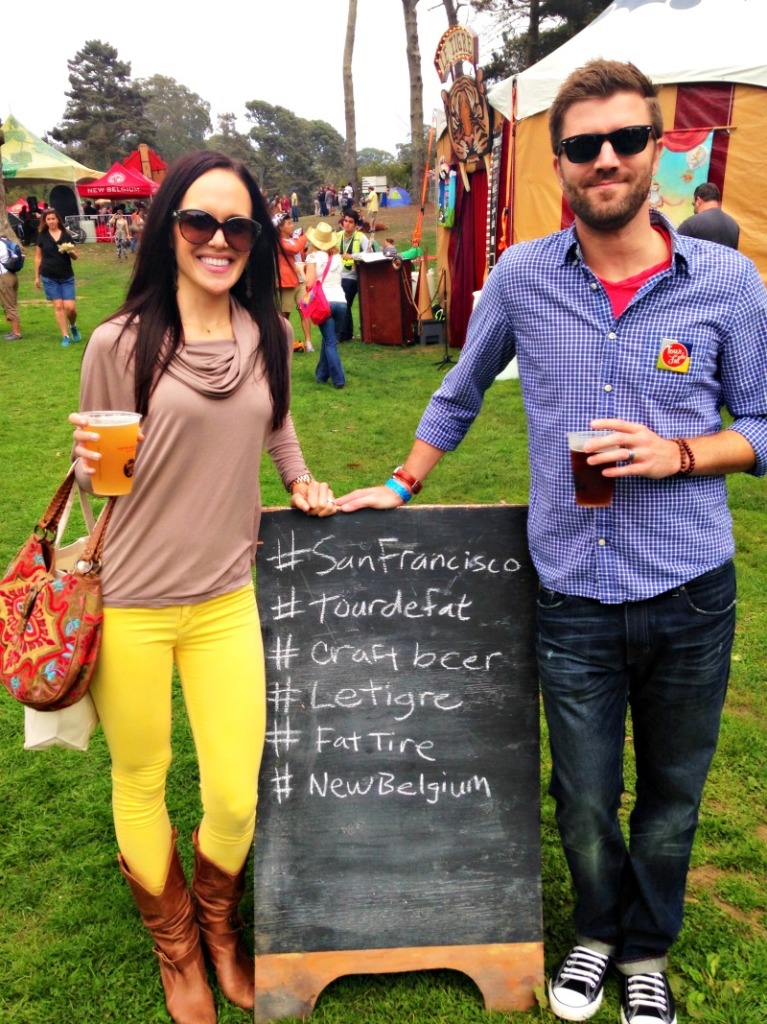 You know it’s a good event when there are suggested hashtags.

We weren’t totally sure if we were going to go, expecting the park to be crowded and cold. Well, it was both of those things. But as soon as we arrived and soaked up the vibrancy of the people and surroundings, we were so glad we made the choice to get off the couch and enjoy our backyard.

It’s fun to get out there.

What’s not so fun? I’m about to head out to handle some civic responsibilities — jury duty awaits me. But at least I have an awesome event coming up tonight, which I can’t wait to share about.

If you live in the Bay Area and are interested in winning two weeks of free classes to the new Avant-Barre studio, please enter today. The contest closes tonight, and I’ll announce a winner tomorrow morning.

Are there entertaining activities in your city that you’ve been meaning to do? Are you a planner before the weekend or do you like to let things unfold on their own? Do you have any vacations planned soon?